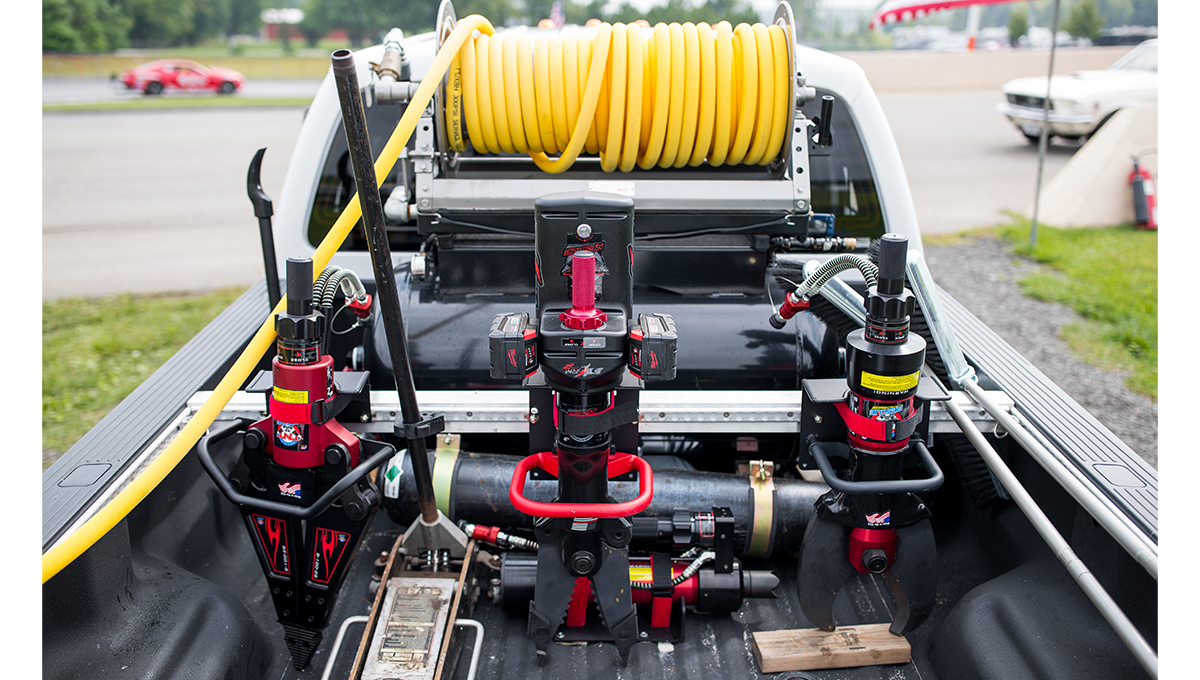 Safety has been the backbone of organized drag racing since the 1950s and that notion is very much part of the NMRA/NMCA, the leaders in street-legal drag racing. Proving the sanctioning body's commitment to safety has been through its actions by bringing safety response in-house with its own Safety Team. TNT Rescue has been named the Official Safety Equipment of NMRA/NMCA with exclusive use of its extraction and heavy-duty tools. We are thrilled to partner with TNT Rescue for our dedicated NMRA/NMCA Safety truck. I have an extensive background in motorsports safety and have worked with their equipment in emergency situations. Our racers can feel safe knowing that we have the equipment and trained personnel to deal with any emergency situation, says Rollie Miller, National Event Director and General Manager of ProMedia Events and Publishing.

The NMRA/NMCA Safety truck a Ford F-350 Super Duty is equipped with an extensive amount of gear for motorsport-specific fire and rescue operations. The trained safety crew will utilize TNT Recuse hydraulic tools a cutter, a ram, and a spreader that are powered by a TNT power unit along with a battery-operated combi tool. The safety company also outfitted the Safety Truck with an assortment of other products and tools. Additionally, the truck is equipped with fire suppression tank, hose and reel from Total Venue Concepts, designed for motorsport use by Rollie Miller. Special thanks to Chevrolet Performance Challenge Series racer Bryan Williams, who works for TNT Rescue, for everything he's done to help us equip the new Safety Team. We are also working with TNT Rescue to launch a new line of high-end battery operated rescue tools that will be released in early 2019, reveals Miller as safety continues to be a priority for NMRA/NMCA to help further separate it from other organizations and events. The NMRA/NMCA Safety truck will be ready for action beginning with the season openers at Bradenton Motorsports Park. The Nitto Tire NMRA Spring Break Shootout is February 28 through March 3 and the following weekend, March 7 through March 10 is the NMCA Muscle Car Mayhem season opener. For more information about TNT Rescue products, visit www.TNTrescue.com About ProMedia Events and Publishing ProMedia Events and Publishing is the leader in muscle car motorsport events and publishing since 1998. It specializes in Street-Legal Drag Racing and Car Shows with its NMRA Ford Nationals and NMCA Muscle Car Nationals sanctioning bodies and produces over 16 events per year from coast-to-coast, together with the highly acclaimed NMCA West Auto-X autocross series. The sanctioning bodies benefit from over 150 participating companies, including the OE manufacturers Ford, Chevrolet, and Dodge. In addition to the motorsport events, ProMedia is a digital and print publishing company with its digital magazine Race Pages and its print product Fastest Street Car Magazine, which is produced monthly. Fastest Street Car Magazine enjoys a unique and effective distribution through speed and custom shops, engine builders, and other auto-enthusiasts retail locations. Fine-tuned over the last 20 years, the FSC distribution model puts the magazine in the hands of parts-buying enthusiasts and influencers. Race Pages Digital launched in late 2017 and quickly made its mark for delivering breaking news, race coverage, exclusive video content, and technical stories.
TNT Rescue