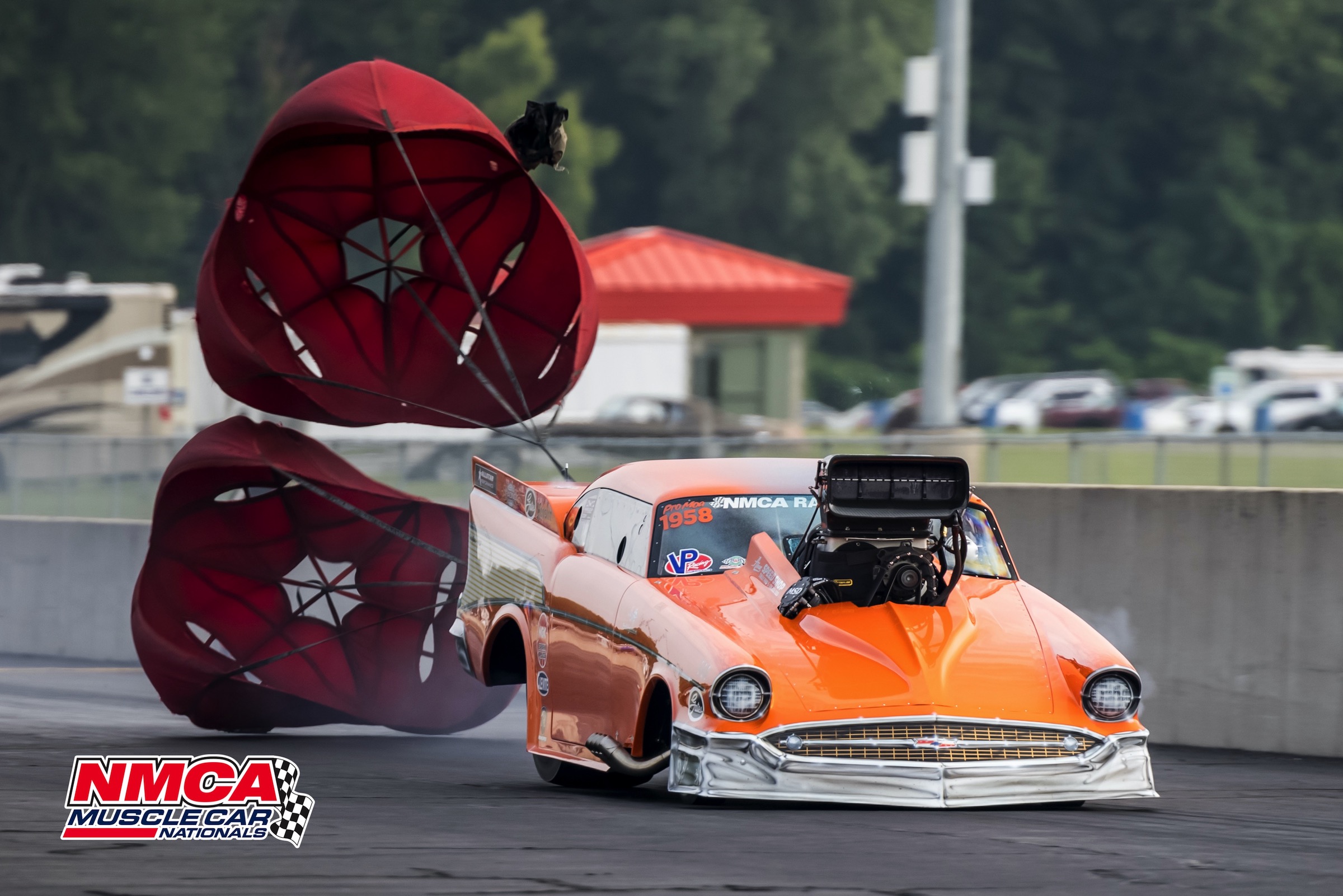 The stakes get much higher today at the Inaugural Arrington Performance NMRA/NMCA Power Festival Presented by Force Engineering. Qualifying winds down and eliminations get underway in the heads-up and index classes, while the TorqStorm Superchargers / QA1 True Street and Dodge // Mopar Hemi Shootout presented by Redline Oil racers will decide the winners today. Of those Hemi racers, the top-performing machines will earn a slot in tomorrow's Arrington Performance Hemi Quick 8 presented by Redline Oil.

As an added bonus, the day features major final rounds that should loom large in the season points chase. With the NMRA/NMCA Super Bowl of Street-Legal Drag Racing truncated by weather back in May, several final rounds from that event were pushed to this weekend. As such, Dart NA 10.5, Holley EFI Factory Super Cars, VP Racing Madditives/Mickey Thompson Street Outlaw, and VP Racing Lubricants Xtreme Pro Mod champions from that event will head for the Winner's Circle today.

For all the action from Martin, Michigan, check back right here and stay tuned to our social media channels. For qualifying and eliminations results, HERE

Here's a look at how all the racing action will unfold today at the Inaugural Arrington Performance NMRA/NMCA Power Festival Presented by Force Engineering.

President of PRI, Dr. Jamie Meyer visited the Inaugural Arrington Performance NMRA/NMCA Power Festival Presented by Force Engineering as part of the PRI Road Tour, which was born out of the pandemic last year to share the spirit of the PRI Show during difficult times. This year the tour transitioned from visiting shops and manufacturers to visiting racing events. This year we want to take the world racing. So how do we elevate all of these events that are making a comeback and are so well attended this year We're bringing the world's best content creators out to racetracks all around the Midwest and all around the country trying to tell the story of racing and what a great pastime and a great sport it is. The tour is ongoing this year through the trade show in December, and this weekend's NMRA/NMCA event fits right in. It's one of our key stops. We're here covering racing, giving back to the racing community, and delivering great coverage. We are talking about the PRI Show and talking about why membership is so important as we bring the racing community together, he added. We are also emphasizing how important passing the RPM Act is to protect the right to convert these street cars to race cars. Obviously, if you look at the NMRA and NMCA lineup, 90 to 95 percent of these cars are street cars, or were street cars that were converted into race cars.

Fresh off a long, but successful run with his Cobra Jet Stocker at the NHRA SPORTSnationals, Holley's Robin Lawrence brought his new motorhome, trailer, and hard-earned Wally to the Inaugural Arrington Performance NMRA/NMCA Power Festival Presented by Force Engineering. After five days of racing in Ohio, he is not running the car this weekend, rather he is focused on supporting NMRA and NMCA racers this weekend. However, you might just see it in competition at the Watson Racing Cobra Jet Showdown at the next stop on the NMCA Muscle Car Nationals tour at Summit Motorsports Park in Norwalk, Ohio, on August 26-29. 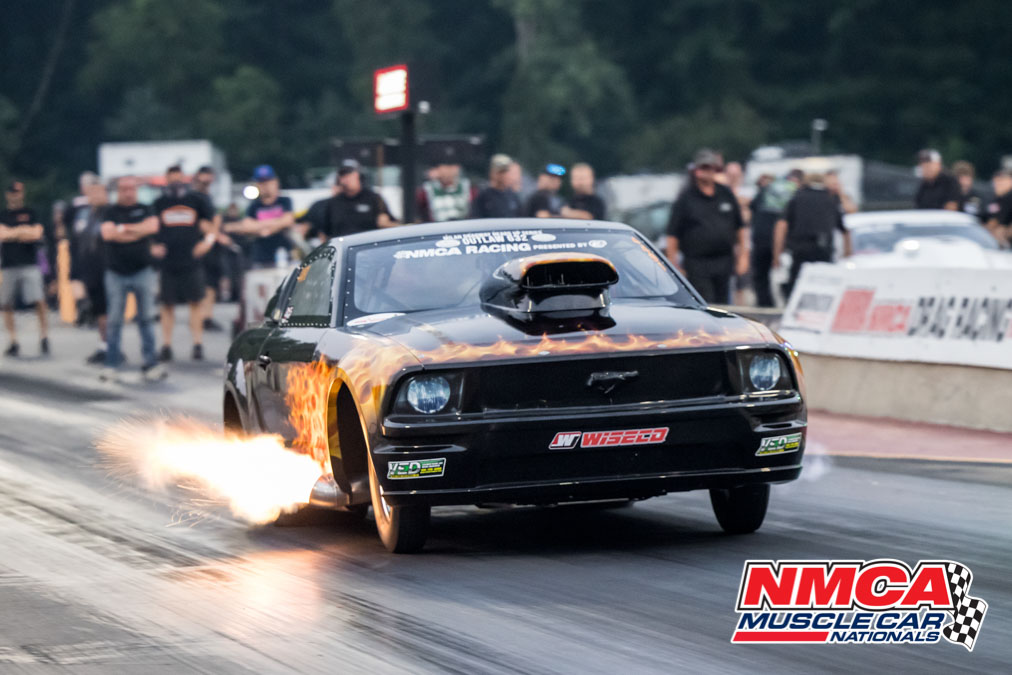 This event marks the first race of the year for Grand Rapids, Michigan's Derik Timmer and his 2006 Mustang. The stallion has run a best of 4.40 at 166 mph thanks to a 632ci, all-billet big-block Ford powerplant that he builds himself, no doubt utilizing his talents that he puts to work at his day job at Visner Engine Development. Timmer was runner up at this race last year, but he has his work cut out for him as he sits midfield in 6th after three rounds of qualifying.

While it is common to see all manner of engine combinations in Fox Mustangs, Dave Fiscus runs a truly unique combination. His car is propelled by a built, turbocharged Buick six-cylinder that is usually at home in Grand National. Because of the engine's relatively small displacement, launching it with angry levels of rpm and boost is required to run the number in Edelbrock Renegade/Xtreme Street. As a result, Fiscus experienced something that few do a broken Turbo 400 output shaft. Snapping one of these beefy parts is rare, but fortunately for Fiscus, Rodney Massengale of RPM Transmissions was on hand to help install a fresh part in time for qualifying. 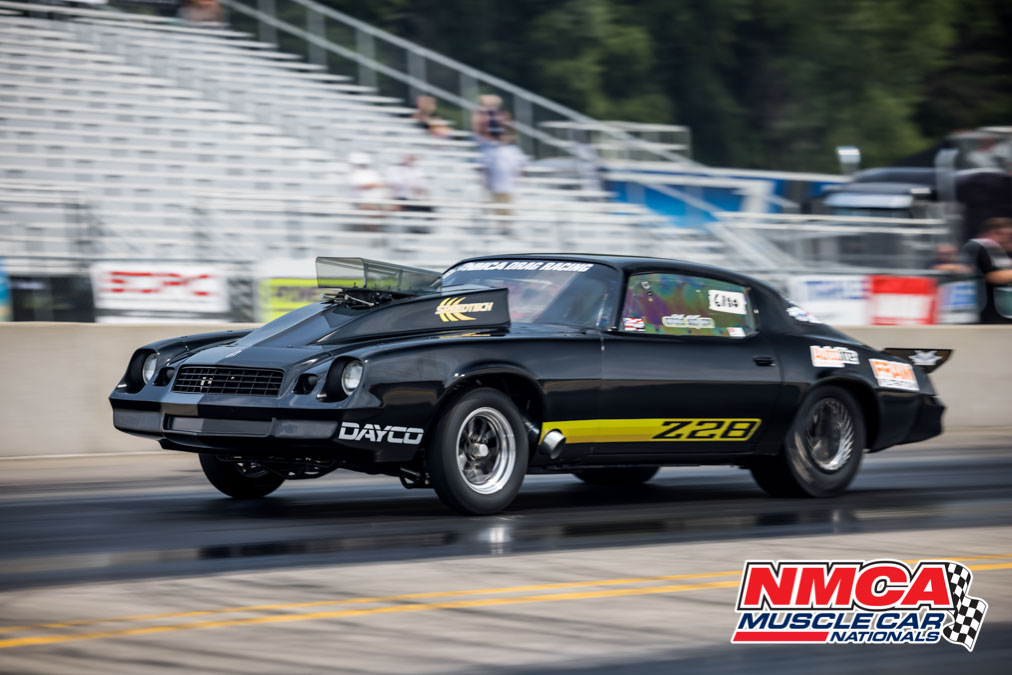 Caledonia, Michigan's Chris Schultetus normally runs his 1979 Z28 Camaro in no-time and small-tire events, and the car has run as quick as 4.48 at 157 mph. Greg Seher is driving it this weekend, wielding the might of the 638ci, big-block Chevy engine and Speedtech nitrous system. Schultetus noted that he likes NMCA events because of the relaxed atmosphere and having three days to run the car rather than the hectic single-day events he's used to. 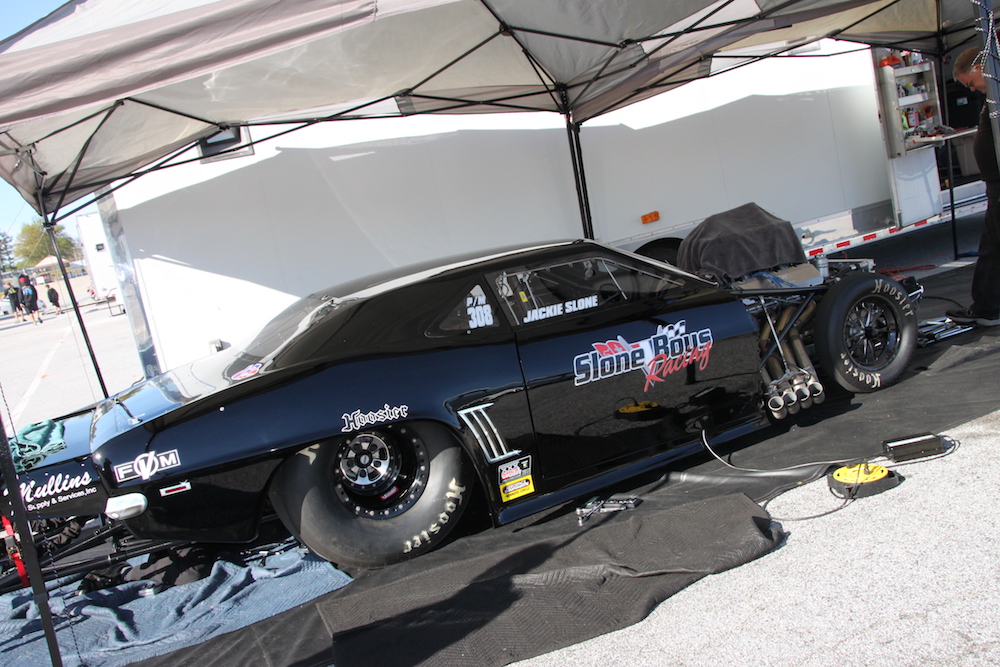 Jackie Slone stopped the clocks at 3.73 to set the pace in the first round of VP Racing Lubricants Xtreme Pro Mod qualifying, but when he drifted just enough to dispatch a cone in the center of the track in the second round of qualifying, he moved down one notch and Steve Summers took over the lead with a 3.72. There's no denying that Slone, who gathered some valuable data in pre-event testing, will try to nudge his way back into the number one spot in the final round of qualifying today in his Camaro powered by a nitrous-gulping 959 cubic-inch engine built by Pat Musi Racing Engines. 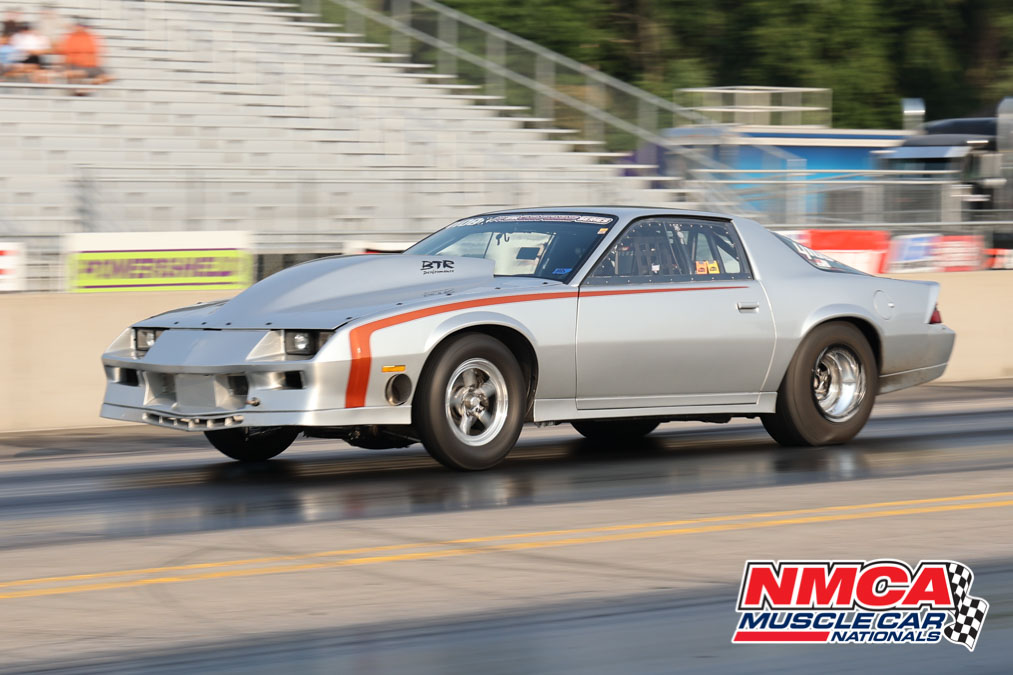 Hitting his first NMCA race here last year, New York's John Bova is back with his 1982 Chevy Camaro, and hoping to improve on his quarter-final finish in 2020. Tyler Bedell is driving the BTR Performance-built, 588ci big-block Chevy-powered machine that uses Robert Lane nitrous oxide equipment for the power adder of choice. 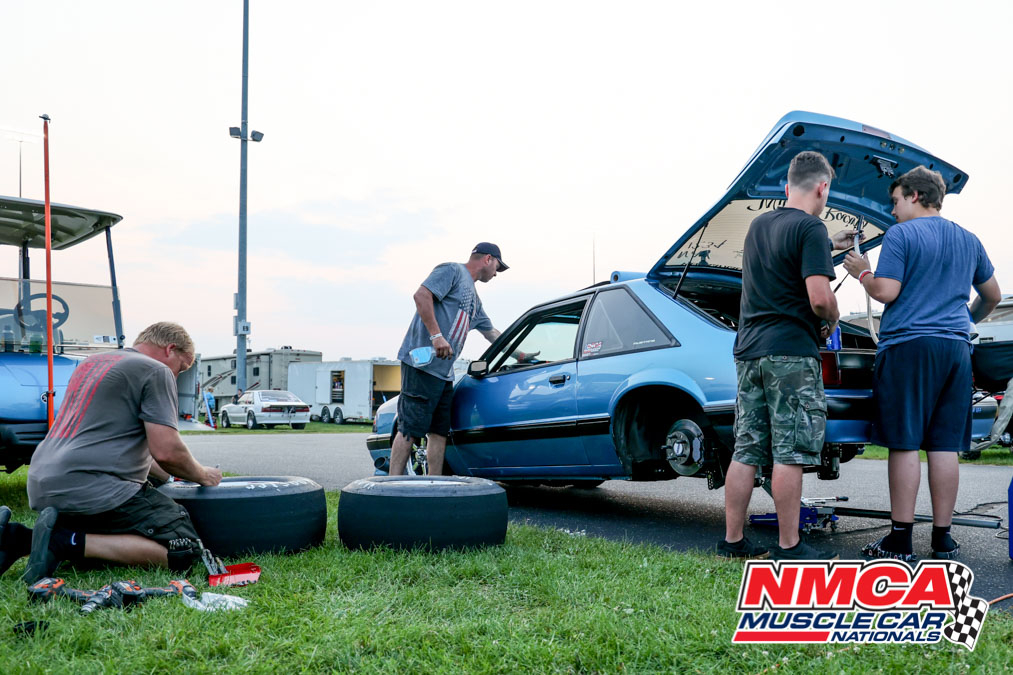 Motor City Muscle NA 9 driver Allen Wilson had a pretty intense Friday afternoon and evening, as he broke the rear lower control arm mount on his Mustang just second into the run. The failure resulted in a wheel that was sawed through, as well, but the Dearborn, Michigan, resident got to work, pulling the rearend and having a local chassis shop weld new mounts to the housing. A replacement wheel was found and he was back in action for the second qualifier of the weekend. 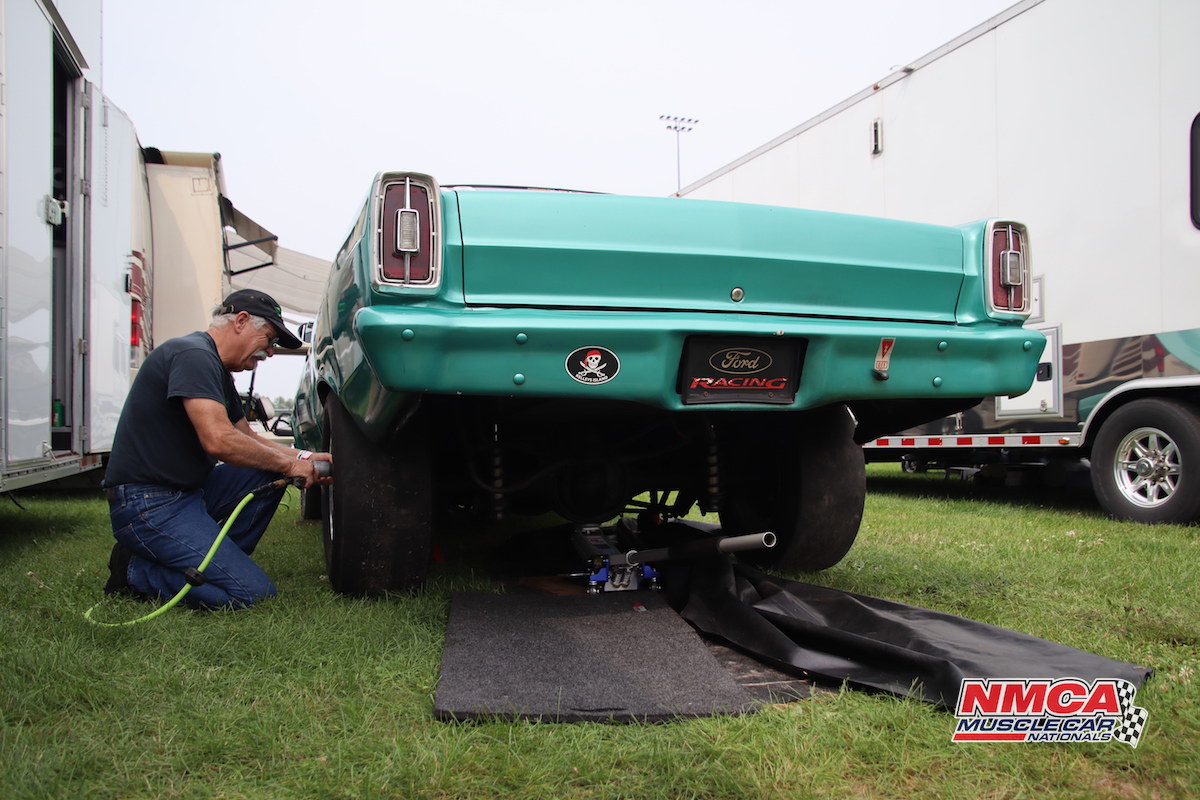 Doug Poskevich noticed a vibration in his Fairlane during Quick Fuel Technology Nostalgia Super Stock qualifying, and is currently looking over his car to try to track it down before he's called back to the lanes for the final round of qualifying today. Poskevich, who has been competing in the category for many years, is in the eleventh spot in points, and has a chance of moving into the top ten by the end the weekend. With a 390 cubic-inch FE engine under the hood of his classic car, Poskevich is competing in the category's 12.00 index. 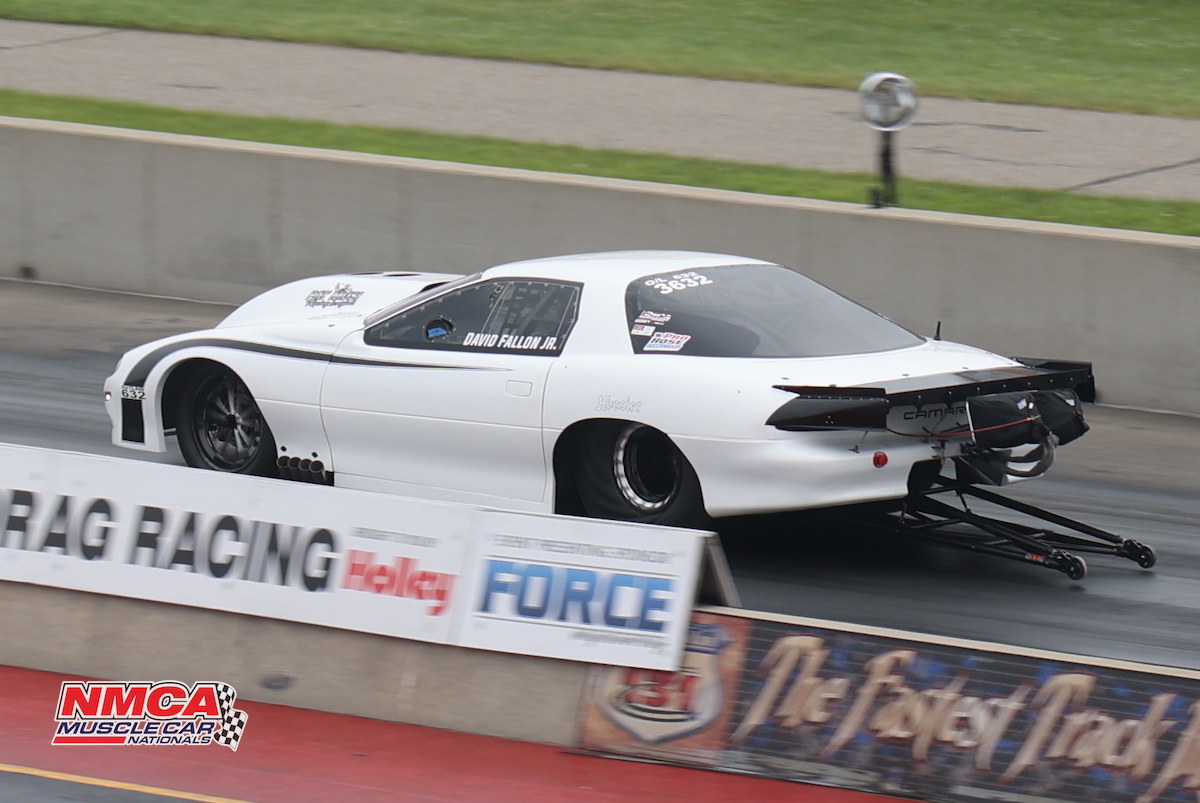 ARP Nitrous Pro Street racer David Fallon, who's selling his Nova, debuted his 2002 Camaro this weekend. It was built by Bickel Race Cars, updated by Cameron Johnson Race Cars, and previously owned by Corey and Justin Swanstrom. Fallon chose to power it with a 632 cubic-inch Pat Musi Racing Engines bullet enhanced by a SpeedTech nitrous system, and Phillip Smallwood painted it. I loved the Nova, but I needed to evolve, and this lighter car will help me do that, said Fallon, who co-owns Pro Hose Connections with VP Racing Lubricants Xtreme Pro Mod driver Jackie Slone. While Fallon had issues in early qualifying, he ripped off a 4.52 and 155 mph in the final round of qualifying moments ago, and is in the fifth spot going into the first round of eliminations today. 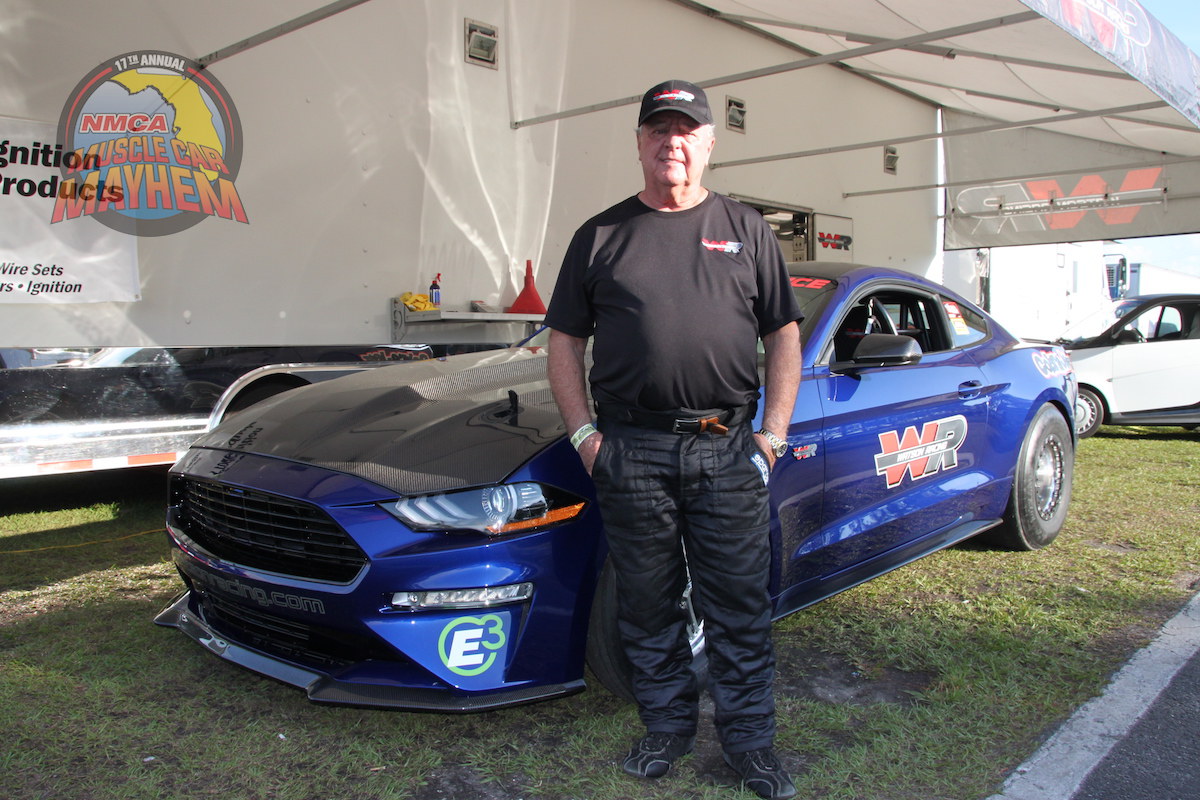 Chuck Watson II of Watson Racing and Watson Engineering had one of the most memorable moments of his racing career when he drove Jim Betz's Mustang Cobra Jet to a win in NHRA Constant Aviation Factory Stock Showdown in memory of his father, Chuck Watson Sr., at the Summit Racing Equipment NHRA Nationals in June at Summit Motorsports Park in Ohio. He also set a Summit Motorsports Park Factory Stock Showdown track record that weekend with a 7.761. Watson II, who will be featured in a three-page Spotlight interview in the October issue of Fastest Street Car, is back in NMCA Holley EFI Factory Super Cars this weekend, and after a few issues in early qualifying, he came back strong with a 3.78 to qualify in the third spot in the final round of qualifying today. 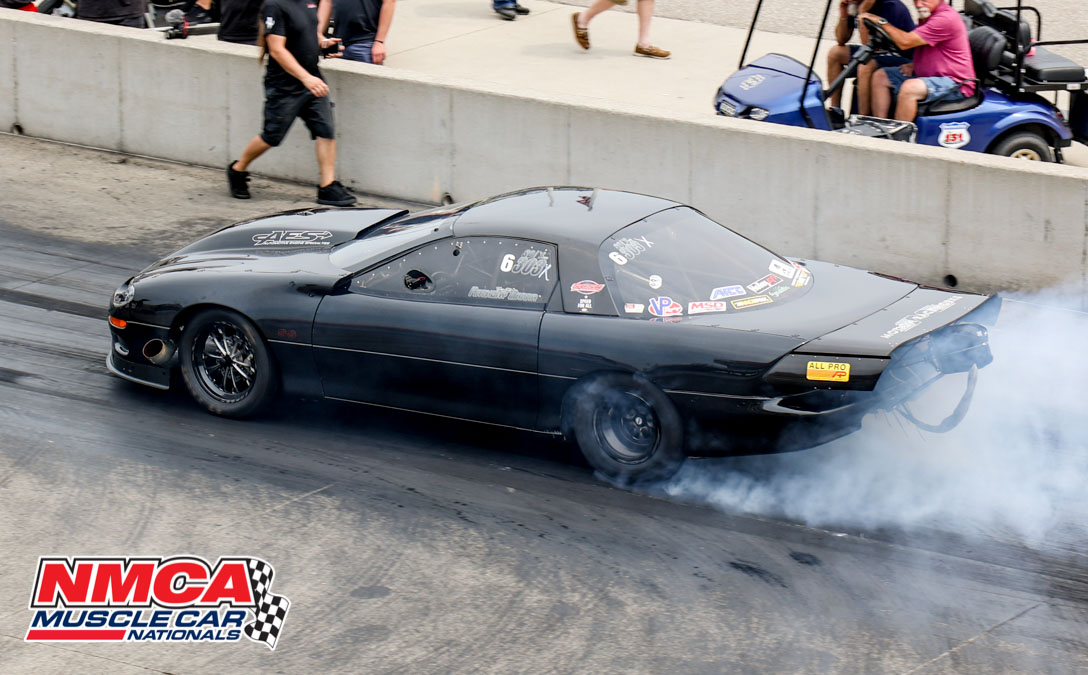 Anthony Manna has been a fixture in the LSX racing community for a long time, and lately he's been focusing on the Mickey Thompson Street Outlaw and X275 category with his Fourth-Gen Camaro. As of 2019, Manna turned the driving duties over to good friend John The Muffin Man Maida who has been driving it ever since. The team posted a 4.40 run on Thursday, but knocked the tires off during their subsequent two passes and will need to make some adjustments to get the F-body hooked up once more. [gallery columns="2" size="full" ids="22421,22420,22418,22419"] While most categories were run through completion before rain rolled in at the NMRA/NMCA Super Bowl of Street-Legal Drag Racing presented by HPJ Performance in May at World Wide Technology Raceway in Illinois, four final rounds were contested this weekend. In VP Racing Lubricants Xtreme Pro Mod, Steve Summers secured a 3.70 to outrun Chip King, who clocked a close 3.73, while in NMCA Mickey Thompson Street Outlaw/NMRA VP Racing Madditives Street Outlaw, Tony Hobson, who spun the tires under his high-horsepower car at the hit, won as Randy Matlock wasn't able to attend. In Dart NA 10.5, David Theisen dished out a 7.96 to defeat Joe Clemente, who turned in an 8.04, and in Holley EFI Factory Super Cars, Tripp Carter traveled to a 7.77 to defeat Bill Skillman, who trapped a 7.80. Congratulations to the winners of that race. [gallery size="full" ids="22424,22426,22430"] Detroit Truetrac Nostalgia Muscle racer Cindee Hall recently decided to design a different paint scheme for the Falcon that she has had for thirteen years. She wanted it to be white with green shamrocks as a nod to her Irish roots. So, Hall, who's currently in fifth place in points, and Doug Poskevich, painted it, and added She-nanigans as well as the quote Though she be but little, she is fierce, from A Midsummer Night's Dream" by William Shakespeare.I'm really proud of how the car turned out, and I love it said Hall, who frequently has fans ask her the story behind the car.
Arrington Performance
,
Coverage
,
Event
,
Martin
,
Michigan
,
nmca
,
Power Festival
,
Race