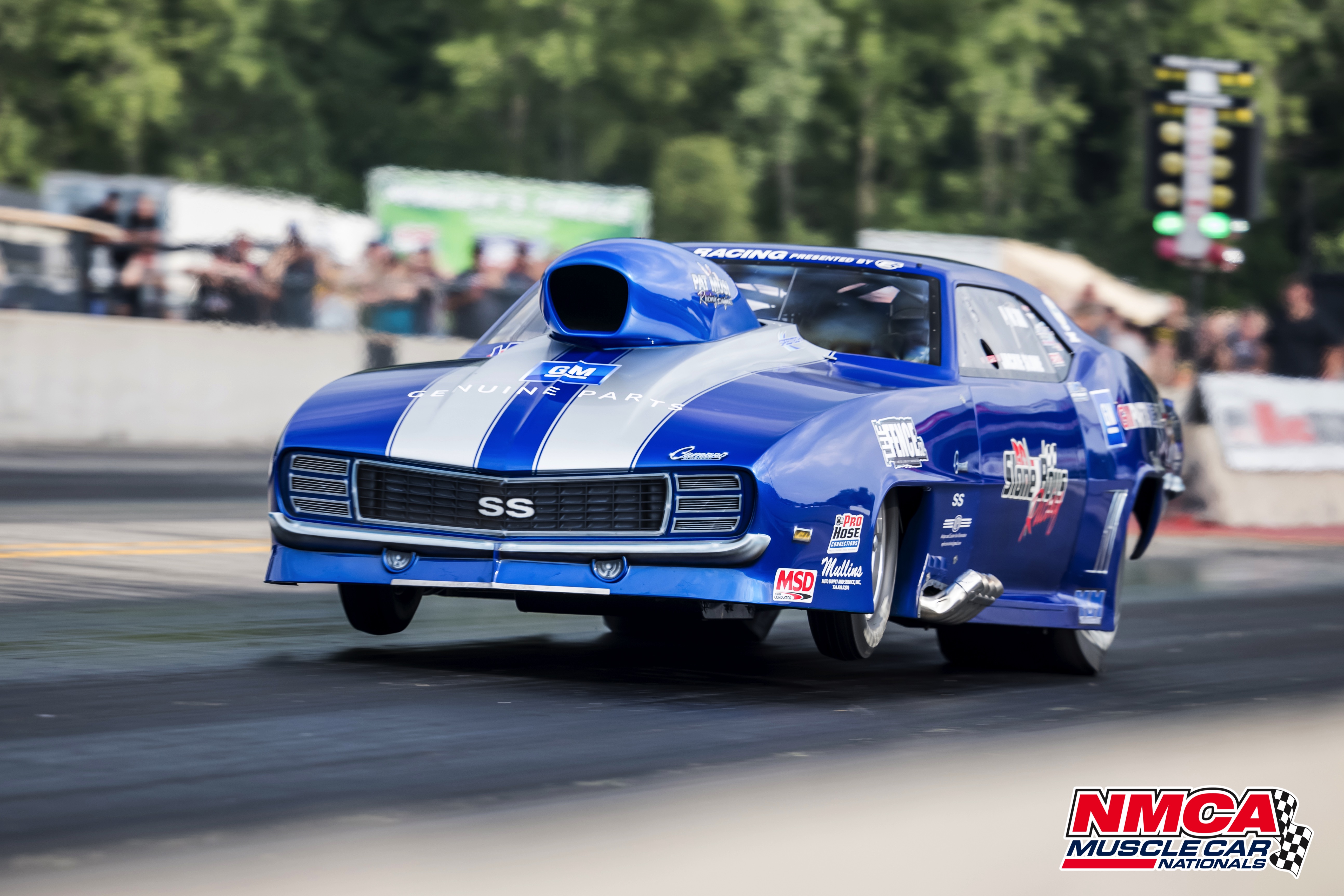 We've reached the final day of the Inaugural Arrington Performance NMRA/NMCA Power Festival presented by Force Engineering at US 131 Motorsports Park in Martin, Michigan, and we're ready to get rolling. Racers are preparing their cars for eliminations, which will be incredibly interesting and impressive, and awaiting those who go all the way are the NMCA Winner's Circle, NMRA Winner's Circle and Edelbrock Victor trophies. To check out results as we receive them, click HERE. [gallery size="full" columns="2" ids="22474,22475"]

This is how the action unfolds on the final day of racing at the Inaugural Arrington Performance NMRA/NMCA Power Festival Presented by Force Engineering. 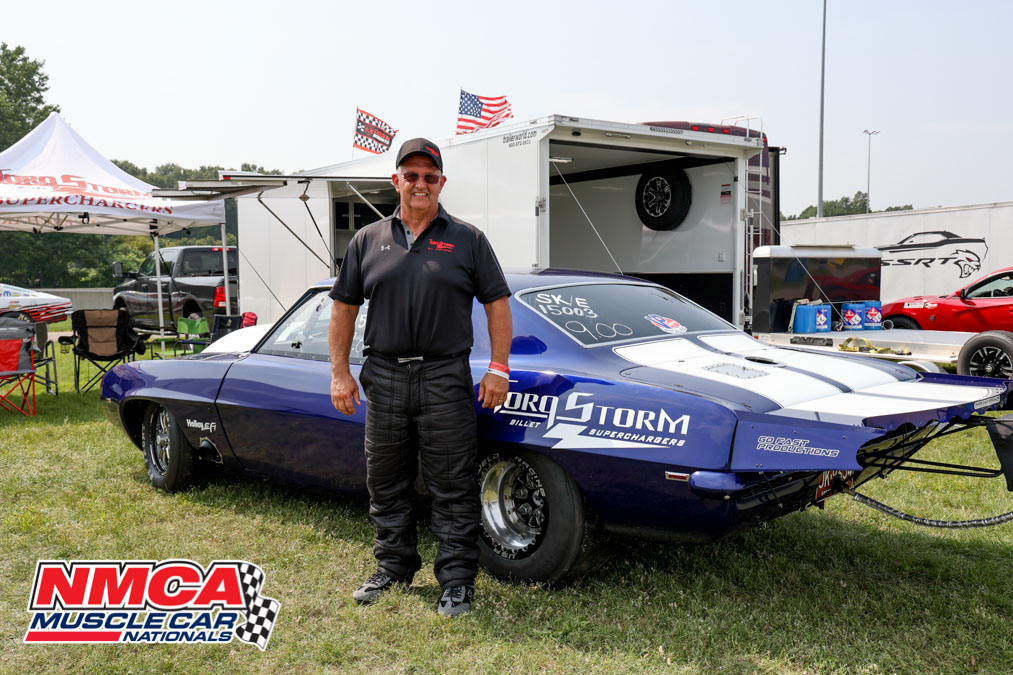 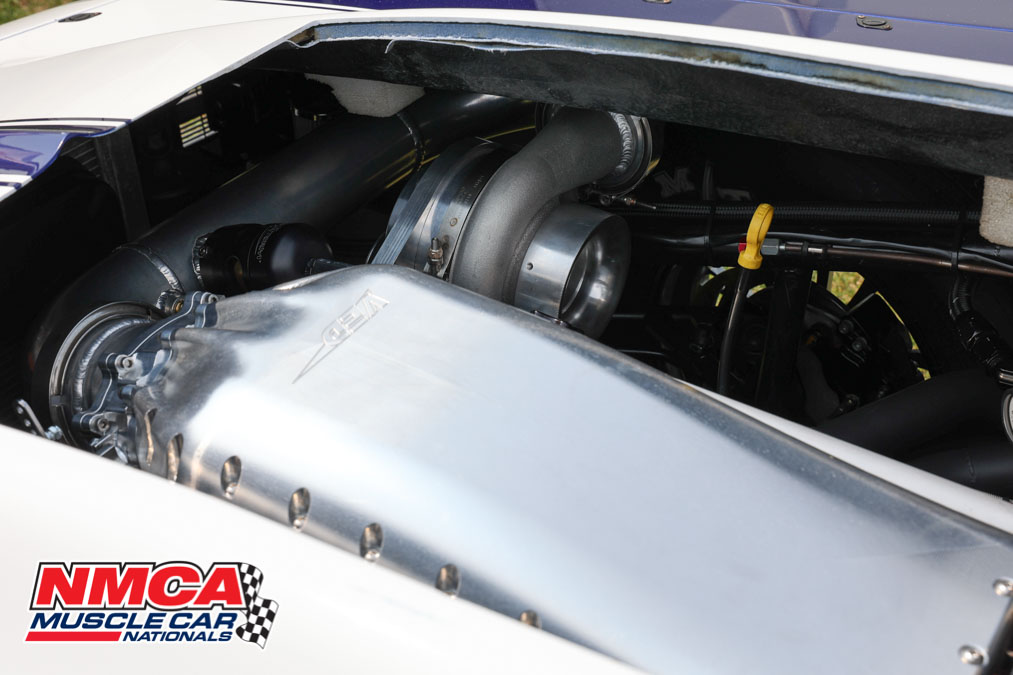 TorqStorm Superchargers has been putting its products to the test on track ever since they began sponsoring the NMCA's True Street class. They first hit the late-model market and the track with a 6th-Gen Camaro and Dodge Charger pairing, and more recently have been running a twin-supercharged Olds Cutlass. The company's newest machine is this 1969 Camaro that Chris Brooker is driving. The Camaro is a former 4-second capable ride that utilized a 700-plus cubic-inch Pat Musi engine on spray for motivation, but the TorqStorm team bought the car as a roller and had Prestige Motorsports build them a max-effort, 388ci LS-based small-block with a single TorqStorm Supercharger. I went from running 11s to 8.60s on my first pass, said Brooker. My face hurt for days from smiling so much. As TorqStorm's Scott Oshinski competed in Saturday's True Street competition with his Cutlass, Brooker has entered the Camaro in LME Street King this weekend. 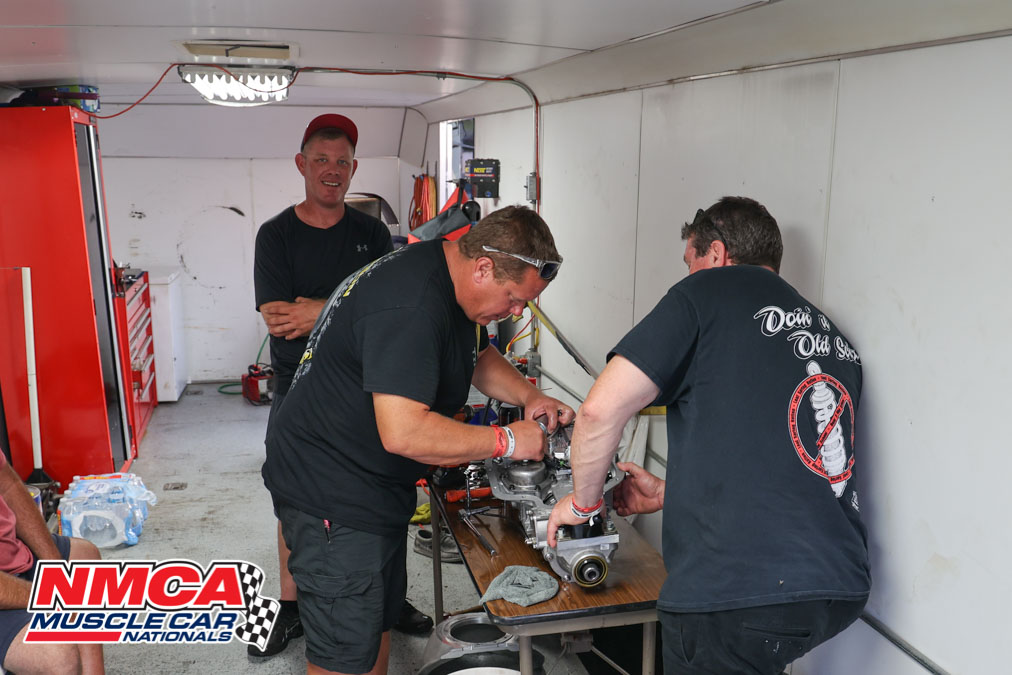 Chevrolet Performance Stock racer Shawn Calabrese has been making progress on on his DR525-equipped, Pontiac Firebird, and decided to try a different gear set in his Proformance transmission. Steven Wardlow handled the upgrades right here at the track, and Calabrese has his work cut out for him getting a handle on the change, as he's experienced wheelspin in the subsequent track passes. 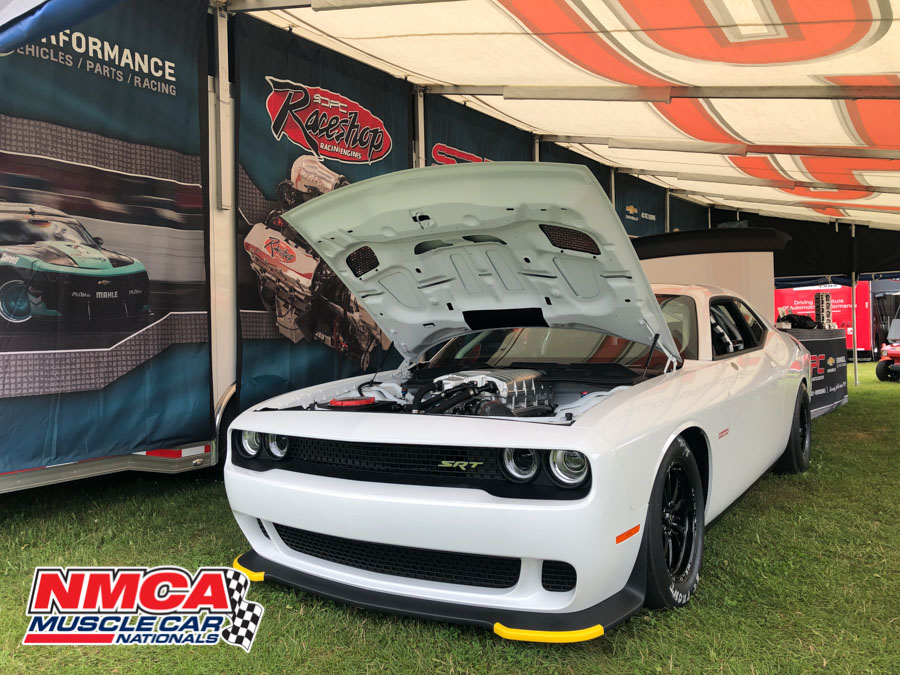 Scoggin Dickey Parts Center has long been known for selling Chevrolet Performance Parts, but the company also stocks late-model Mopar parts, and in the company's booth this weekend at US 131 Motorsports Park, there is a 2021 Dodge Challenger Mopar Drag Pak that is ready for Holley EFI Factory Super Cars. Word is they have it sold, but are picking up a few others in the near future. 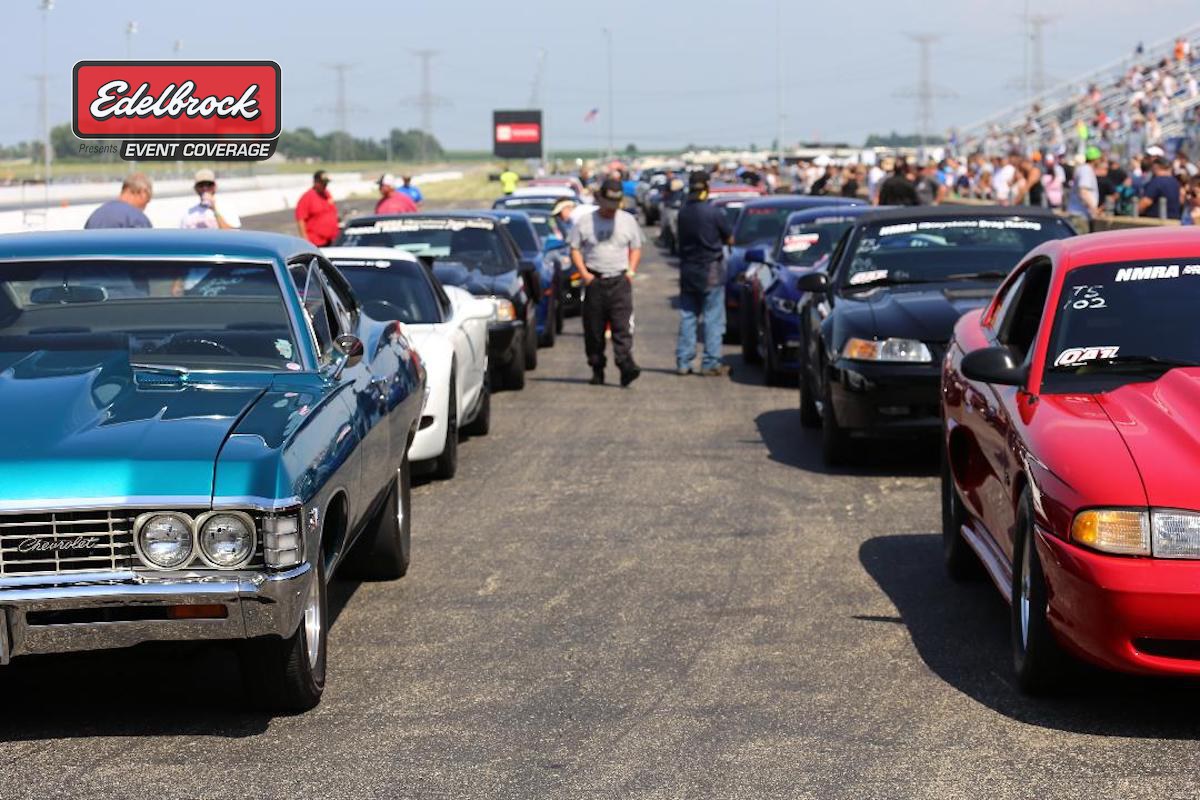 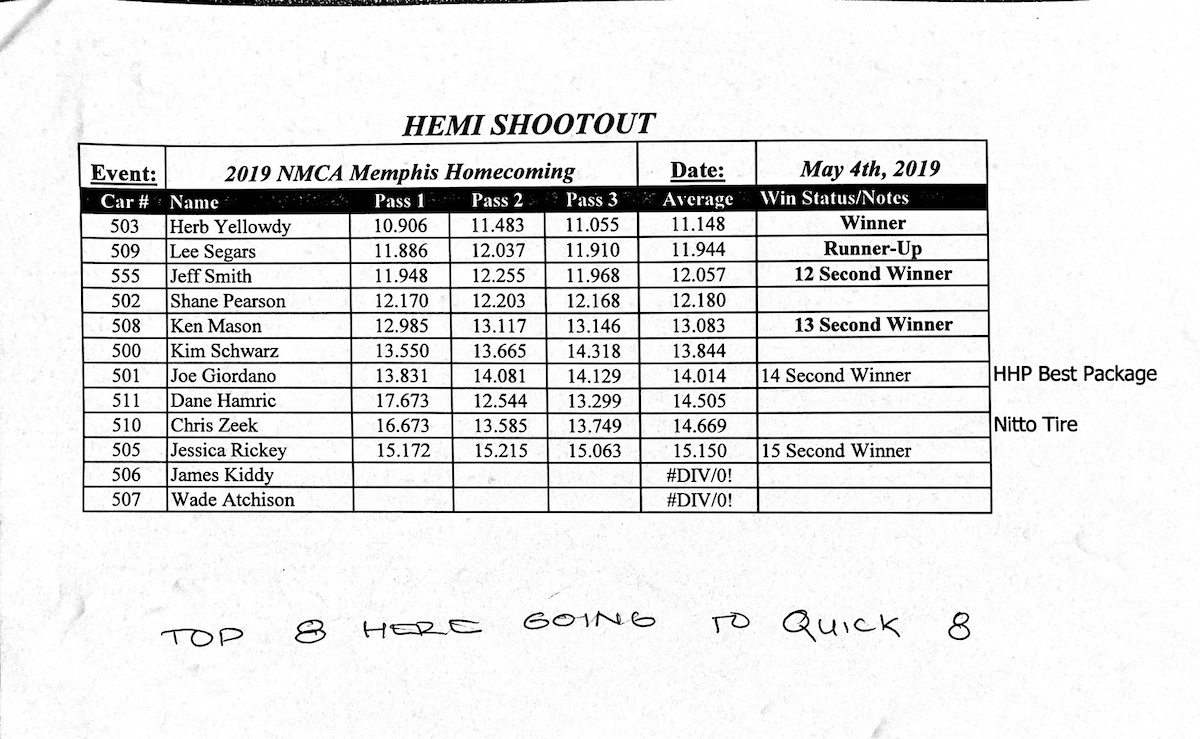 Edelbrock Renegade/Xtreme Street racer Rodney Ragan recently switched from his Bennett Racing supercharged small-block Ford powerplant to a TRE Racing Engines big-block Chevy on Induction Solutions nitrous after getting beat by a few likewise equipped machines. He still has KBX tuning the FuelTech EFI on the car, which is somewhat new to the team. With just over a dozen passes on the car, Ragan said they are getting close to where it needs to be, and are working on selecting just the right torque converter to optimize the on-track performance. A first-round win over Chris Holbrook has him going to the second round of eliminations.

Ron Rhodes claimed the top spot in Mickey Thompson Street Outlaw qualifying with a 4.19 hit. Rhodes's Camaro features a BES Racing Engines 500ci small-block Chevy with Speedtech nitrous oxide equipment, and still runs leaf spring rear suspension. Equally impressive as all of that, Rhodes bought the Camaro in 1984 when he was 14 by mowing lawns and saving his money. He drove it from California to Delaware on the 1996 Hot Rod Power Tour when it was a low 11-second street car, and previously ran with the NMCA shortly after that in a couple of naturally aspirated, heads-up classes before finding his home in the radial tire categories.

Keith Rhea is debuting his new Fox-body coupe this weekend, which is equipped with the 4-valve modular and Bullseye-turbocharged combination he has in his 2004 Cobra, which is currently undergoing some updates to the front of the chassis. 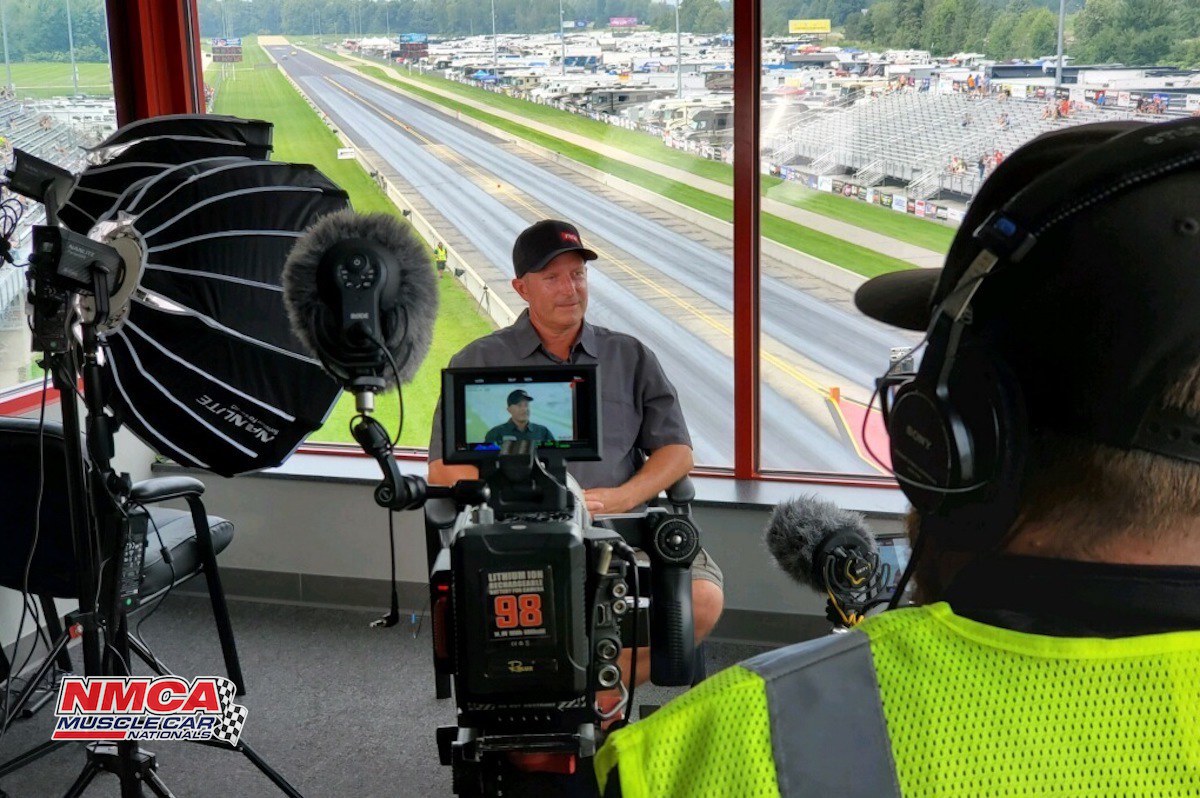 Steve Wolcott, the president and CEO of ProMedia, the parent company for the NMRA Ford Nationals and NMCA Muscle Car Nationals,'sat down with our colleagues from the PRI Road Tour yesterday during the Arrington Performance NMRA/NMCA Power Festival presented by Force Engineering at U.S. 131 Motorsports Park.I was happy to have them at this event, along with all of the racers and industry influencers, said Wolcott. We talked about how important motorsports is to our society and economy, and how it affects our fans and their families. We also covered the RPM Act, and its impact on our freedom. It was a very positive conversation. [gallery columns="2" size="full" ids="22503,22507"]   Dennis Hagedorn and Steve Summers had a wild time in the second round of VP Racing Lubricants Xtreme Pro Mod eliminations today. Hagedorn, driving the Dodge Avenger owned and built by David Janes Race Cars and powered by a nitrous-enhanced 942 cubic-inch engine by Reher Morrison, went red by -.0009 and lifted, while Summers went into a wheelie in his Camaro, crossed into Hagedorn's lane, worked very hard to avoid hitting him and got into the wall. Steve did a great job of driving, and managed to miss me, said Hagedorn. Because he crossed the centerline, I won, and that's definitely not the way I wanted to win against him. The Missourian, who ran a personal best of 3.73 and 200 mph at the NMCA event in Florida last March, is preparing for the semifinal round of eliminations with help from crew chief Shannon Jenkins, as well as David Janes, Reco Willingham, Foster Janes, Lee Boettcher, Jaime Janes, Elizabeth Boettcher, Dan Hagedorn, Camren Kulp and Sean Herron. His efforts also are backed by Troy Mills Country Store and Victory Metals and Recycling. [gallery columns="2" size="full" ids="22505,22506"] Running in Coan Stock/Super Stock, the amount of allowed engine modifications is pretty slim. For Brad Zaskowski and his dad Bill, they're using a 1964 327-250hp engine with a Liberty four-speed, a McLeod clutch, a Browell bellhousing, and a 9-inch Ford rear end with stump-pulling 6.20 gears. From nearby Grand Rapids, Michigan, Zaskowski counts on Parsons and Myers in Dayton, Ohio for the engine work, which includes a Comp cam, an Edelbrock Victor intake, and Jesel valvetrain components. The car wears both Mickey Thompson tires and wheels. In the heat this weekend, the younger Zaskowski's dial is an 11.05, but in good air the car run as quick as a 9.95. Bill originally built the 1966 Chevy II back in 1976, but ended up selling it in 1987. However, he bought it back in 2007. It took the Zaskowski's a couple years to get the car back in fighting shape, which included redoing the paint and installing a new cage. The car still retains its original sheetmetal, however.
Edelbrock Victor Trophies
,
Inaugural Arrington Performance NMRA/NMCA Power Festival presented by Force Engineering
,
US 131 Motorsports Park