Jeff Knox's True Street Nova is a Knockout on Nitrous 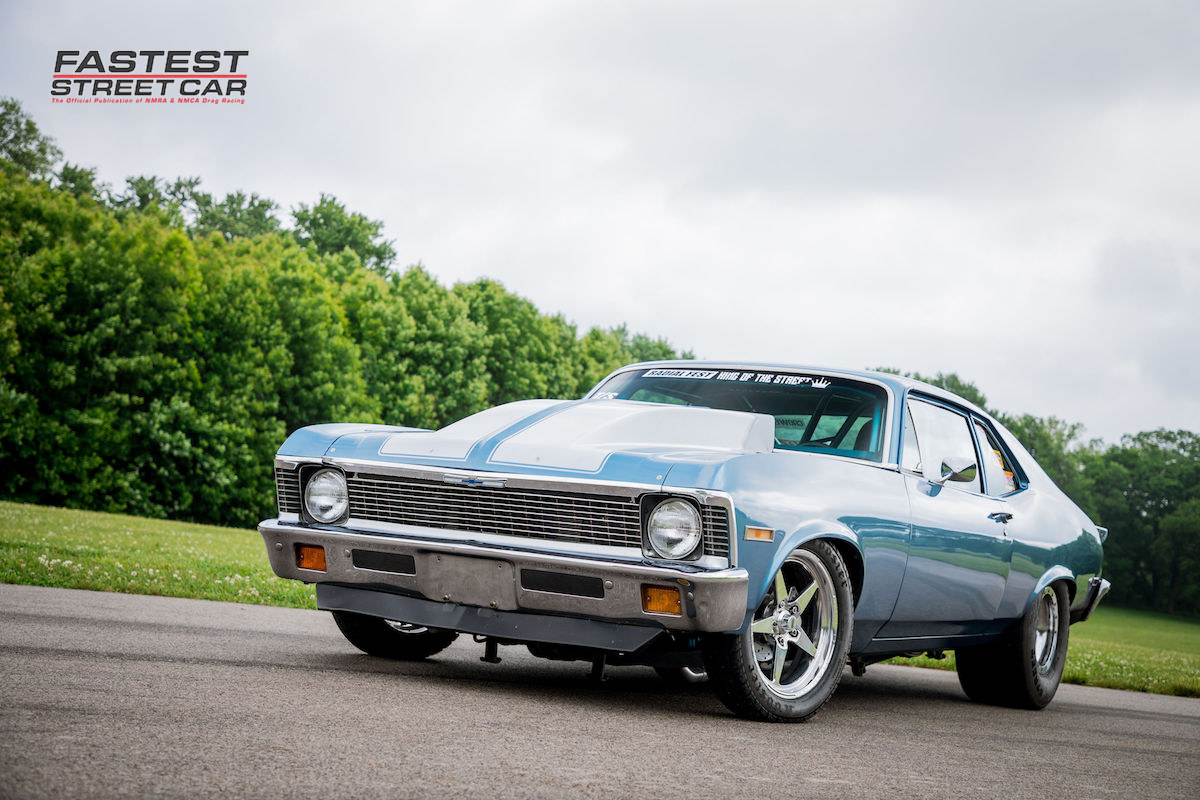 A passion for power came early in life for Jeff Knox, as he would go motocross and off-road racing as a child growing up in southern California.

By the time he was fifteen years old, he was flipping through the pages of a publication called the Recycler and saw a 1972 Nova with a 350 cubic-inch engine, two-barrel carburetor and single exhaust.

It was for sale by its original owners not far from our house, said Knox. It had been sitting under a car-cover in their driveway for a long time. The body was in excellent shape. It was blue and it had a blue cloth interior with a bench seat, and it had fourteen-inch American Racing Torq Thrust II wheels on it. We bought it for just $1,000. I remember it like it was yesterday. It was in 1990, and I put dual exhaust with dumps on the car, and it was loud.

Ready to drive it as soon as he turned sixteen years old, Knox gave the car gauges to measure water temperature and oil pressure, and upgraded its brakes.

We started going to watch street races in southern California every Saturday night, and I had a curfew, but it was too hard to leave at that time because it was always when some really badass cars would be rolling off the trailer to race, said Knox, with a laugh. Before long, we were doing burnouts and racing a car or two, and of course, I blew the engine. I went to the junkyard and bought a 400 cubic-inch small-block Chevy out of a running 1974 Caprice, and took the hurt engine out of the car with a cherry picker in front of the house and put the new engine in, but when we started it, it shook really bad and we didn't know why.

That's when Knox headed to a local Chevrolet dealership to inquire about the vibration.

When I got to the Chevrolet dealership and told the guy that I needed a harmonic balancer, because I didn't even know what the hell I needed or how to properly ask for it, he asked if I was sure I didn't have an externally balanced engine, said Knox. I had no idea what that was, so he told me to give him the number off the side of the engine block, and when I did, he said Buddy, your 400 cubic-inch engine is externally balanced but you brought me an internally balanced harmonic balancer so it's the wrong one for your engine. That's when I started learning about those engines.

Set up with the right parts at that point, Knox placed a higher-flowing carburetor on top of his new engine and, as he put it, 'drove the wheels off the car.

I would do doughnuts in the grass field, haul down dirt roads, hit mailboxes, catch air at intersections and at one point, I even went through a picket fence in someone's yard, said Knox. Unfortunately, I gave the poor car no respect, and I killed that engine, so I stored the car in the backyard of the people who eventually became my in-laws.

I brought the car back to my house, put the engine, as well as a new fuel cell and electric fuel pump in it, said Knox. I also put a six-point mild-steel rollcage in it, and replaced the factory, one-wheel-peel ten-bolt with a Ford nine-inch out of a 428 Mustang Cobra Jet. When we installed the new 406, we had a manual valve Turbo 350 transmission and a Munsinger converter, and I was thinking This thing has got to haul, so we took it on one of those around-the-block missions where I told my girlfriend, who's now my wife, to get in next to me and my friend to get in and hold onto the milk crate while I tried it out, and I did a burnout, floored it and flashed the converter, but I hadn't relocated the battery to the trunk, so it flipped and started a fire. We beat the flames out with a shirt.

After making repairs, Knox went on to street-race the car, which was sporting primer rather than paint, for several years, and then moved from California to Tennessee, where his parents had recently moved, with his car in tow.

I wanted to raise my family there, said Knox, who's married to Heather, and whose children are Jeffrey, Garret and Jessie.

Before long, he took his engine apart, freshened it, gave it a bigger roller cam and topped it with Trick Flow heads massaged by Brian Tooley Racing. He also paired it with a set of larger headers, and the car responded by running 6.50s on 93 octane pump gas in eighth-mile bracket races at Beech Bend Raceway in Bowling Green, Kentucky. It also helped Knox hold his own in street-races, and it was a centerpiece at local car cruises with its new five-inch cowl hood by GlassTek and fresh blue paint.

We got in trouble for the exhaust being too loud and we had to go to court, but we loved it, said Knox.

Still, he longed for something more, and broke that news to his wife one afternoon.

I came home and told my wife that the car still wasn't exactly how I wanted it, and that it needed to be cut and rebuilt, and she said, Then do it, so when she left the house to go to the store, I backed the car out of the garage, took a Sawzall to the cage and ripped the seats out, said Knox. You should have seen the look on her face when she came home and saw it.

From there, Knox, who wanted to be able to race the car and run to the store in it, turned his focus to NMCA Gear Vendors True Street in 2006.

I was talking with Tyree Smith of Tytech Performance, and he referred me to Steve Matukas of Matukas Motorsports, and I told him I needed a 25.5 car with a factory dash, no fiberglass and a big engine, and that I didn't want to cut the car up, and Steve said Okay, and that was the start, said Knox. Steve installed a Chris Alston's Chassisworks FAB9, ladderbars and coilovers in the rear, as well as Strange brakes and a parachute mount. The car still has the factory steering box and control arms, and Steve set it up.

In that time, he purchased from a friend a 598 cubic-inch tall-deck big-block Chevy topped with Brodix BB2 Xtra heads and an Edelbrock Victor intake.

I took the engine to Tyree Smith and he did some machine work, gave it a new Bullet camshaft, gave it 15:1 compression and made it a big, nasty nitrous engine with a Wilson fogger nitrous system and a Wilson plate system, said Knox. We backed it with a Mike's Transmissions Monster Glide and a Pat's converter, and Rajat Sharma of Hot Wirez did all of the wiring. We put a 15-gallon fuel cell in the car and when Steve Matukas was done working on it, we took it to Dennis May for body work and paint.

With that, Knox began blasting to mid 8s in the instantly-popular car featuring a full interior and a stereo, while also boasting the car in internet forums in 2007, and asserting that before long, he would be the first driver to achieve 7s in NMCA Gear Vendors True Street.

In addition to saying that we would be the first to run 7s in True Street, we were saying things like You're going down, and Daddy's coming, and we got in trouble for talking smack, said Knox, who was no stranger to winning races.

He accomplished what he had set out to accomplish in 2008 when at the NMCA event in Tennessee, he became the first NMCA Gear Vendors True Street driver to lay down a 7-second pass.

We went 7.91 in a test pass, and then we put the car on the trailer for the night, and then we averaged 7.98 in competition and won, and everyone went crazy, said Knox.

Following the fine feat, Knox parked his car until the NMCA event in Tennessee in 2009.

Unfortunately, it ate a lifter there, and I fixed it, made a test pass, did a wheelie, ripped the ladderbar cross member out of the car and Steve Matukas was welding and bracing for us at 1 a.m., said Knox. Then, believe it or not, we went on to win the race.

Upon returning home, Knox further flexed his muscles in Radial Fest King of the Street and at other eighth-mile events around his home, where he was laying down 5.0s and then 4.90s after some changes to his nitrous set-up. But NMCA fans found him to be as fierce as ever when he showed up to the 17th Annual NMCA Quick Fuel Technology Bluegrass Nationals presented by Scoggin-Dickey Parts Center last May at Beech Bend Raceway in Bowling Green, Kentucky.

There, in addition to winning with a 7.86 average in the car rolling on Mickey Thompson 315 drag radials in Gear Vendors True Street, he won a race as part of the Grudge Race television show which was being filmed at the event.

That was a good weekend, to say the least, said Knox, whose teenage son, Garett, recently climbed into the driver's seat of his dad's car and won in the Radial Fest 6.0 category without the use of nitrous.

Now, Knox is preparing to have his engine freshened for the 2019 race season and plans to compete in NMCA Gear Vendors True Street as well as some other events. His son, Garett, may see some more seat time in the car as well.

This car is part of my family and I can't imagine ever giving it up, said Knox. We've accomplished a lot in it, and it's irreplaceable. It's not going anywhere, and I'm ready to make even more memories in it.

Crew: My family and friends

Tires: Hoosier tires in the front and Mickey Thompson 315 drag radials in the back

Fiberglass/Carbon body components: All steel with the exception of a fiberglass hood.

Fastest mph:181 mph in the quarter mile and 144 mph in the eighth mile

(Feature from the February 2019 issue of Fastest Street Car)