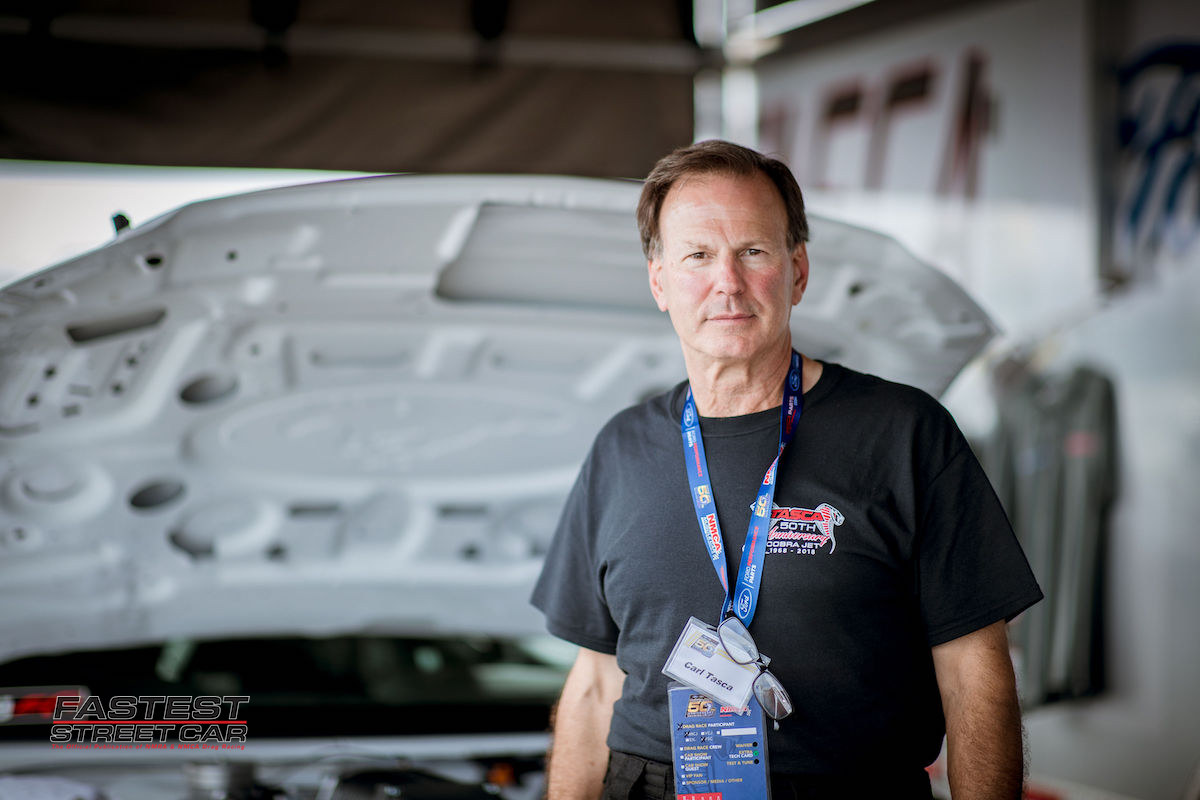 While many of Carl Tasca's childhood friends would go to each other's homes after school to play, he would go to his father Bob Tasca's dealership to work.

Famously located at 777 Taunton Avenue in East Providence, Rhode Island, he would wash car after car, hour after hour.

After he washed what he was certain was a million cars, he would ask his father when he could go from washing cars to dressing up and selling cars, and his father would say I'll let you know.

As the years went on and the family business grew, moved to a bigger complex in Cranston, Rhode Island and became the Tasca Automotive Group with facilities in Rhode Island, Massachusetts and Connecticut, Tasca could see that his father, who was married to Josephine, was helping him to develop the same strong work ethic he had.

I used to call the dealership Tasca University, because that's where I got my education, said Tasca, whose brothers, Bob Jr. and David, are involved in the family business along with other family members including his son, Carl Jr., nephews Funny Car driver Bob Tasca III, Michael and David Jr. and niece Jamie.

These days, when Tasca is not working or campaigning his 2016 Mustang Cobra Jet in the NMCA Holley EFI Factory Super Cars category, he spends time with his children, Carl Jr. and Carrie, and grandchildren, Giada, Giordana, Carl III, Anthony, Benjamin and Jacob, who call him Pappi.

Before a race, my grandchildren call and wish me luck and tell me to make sure I win, and if I don't win, they want to know why, and I'll tell you, it's a lot of pressure, said Tasca, with a laugh.

Read on for more from Tasca, who finished sixth in NMCA Holley EFI Factory Super Cars points in 2017 and 2018 in his 2016 Mustang Cobra Jet, which has gone as quick and fast as 8.01 and 170 mph. While he has accomplished a lot, he has made it known that he prefers to talk more about his father and less about himself.

Every time I start my Cobra Jet, I think of my father, and that's a good thing, said Tasca.

FSC: THE TASCA AUTOMOTIVE GROUP PRIDES ITSELF ON CUSTOMER SERVICE. DOES THAT GO BACK TO WHEN YOUR FATHER, BOB TASCA, RAN THE FAMILY BUSINESS BEFORE HE PASSED AWAY IN 2010

TASCA: We want to sell as many cars as we can, but more importantly, we want to make sure our customers are satisfied. My father always said If you make people happy, the bottom line will happen. It's hard to believe because we are so into Fords, but in addition to our Ford store, we have Lincoln, Volvo, Mazda, Chrysler, Fiat, GMC, Buick, Chevrolet and Kia stores, and there are Tascas working at all of them. Who knows with these Tasca kids They could open another dealership just in the time that we're doing this interview. We're a very close-knit family, which is a good thing, because we're at work together constantly. We might have discussions about how to do this or how to do that, but in the end, we all speak with one voice.

My father accomplished so much. When he decided that it was time to do some performance racing because we were getting whooped by Chevy on the street, he convinced Ford Motor Company to get into drag racing in the 1960s, and sold a lot of performance cars and parts for drag racing. He fathered the Cobra Jet by putting a 428 engine together with Bill Gilbert in a 1967 Mustang and took it to Ford Motor Company and ran tests. Ford liked it. It was affordable and that was the beginning of the Cobra Jet, which my father then went on to help market. He would go all over the country to teach dealers how to prepare and sell Cobra Jets. His most successful car was the 1965 AFX Mustang that won the Winternationals and the Summernationals. My father always said his business made him money and racing made him famous, and he invented the statement Win on Sunday, sell on Monday. Being around all of the race guys like Bill Lawton and John Healey, who along with my father are in the Drag Racing Hall of Fame, was like being at Disney World.

When Ford decided to make the 40th anniversary Cobra Jets, we got two at the dealership, and I said to my father, Why don't we build a nostalgia car I'll drive it and we'll have fun, and a tear actually came down his cheek. Ford built the car, and I asked Ralph Poirier, who was my first crew chief, to help with some suspension work and tuning. I've had a bunch of Cobra Jets, the most famous is my 2010 which was the first Cobra Jet to run in the 7s. It went 7.96 in Bradenton, Florida in 2012 and then later, it went 7.54 at 185.5 mph in Orlando in 2016. I did a lot of match-racing with that car, but the car I'm currently enjoying is the 2016 Cobra Jet. I started racing with the NMCA in 2017, and I immediately liked the Factory Super Cars class because it had Cobra Jets, COPO Camaros and Challenger Drag Paks. I also immediately liked it because the cars competing in it look like the cars I sell in the showroom, and because it was heads-up. It's great to have the Big Three in drag-racing again. It is like the 1960s all over again, and every time I'm at the track, someone talks about the 1960s. Everyone is pretty committed to seeing the class grow, and it's becoming very popular, and just like Top Fuel driver Leah Pritchett coming over to the class, I think we will probably see more and more Pro Stock guys come over to the class.

IN WHAT WAYS IS YOUR CREW ESSENTIAL TO YOUR RACING PROGRAM

Greg Grimes is my crew chief. He is one of the smartest young men that I have ever met and he has a tremendous work ethic. Greg started with us when he was just 19 years old. He worked on Bobby's Funny Cars for a few years before he joined the Cobra Jet team in late 2008. He worked side-by-side with Ralph Poirier and eventually took over as crew chief when Ralph retired. The number two guy is the team manager, Don Belanger. Don has worked with our family for about forty years and in my opinion, he is one of the smartest Ford technicians in the country. Other team members include Mario Tella, Dennis Hot Rod Gomes, Don Barry and of course Uncle Bert Maher, who drives our rig all over the country and who, at 79 years old, is an inspiration to us all. The nice thing about these guys is that while they're tuning up my car, they're also tuning up cars for our customers. What's good for my car is good for our customers cars as well.

2018 HOLLEY EFI FACTORY SUPER CARS CHAMPION GEOFF TURK RECENTLY ANNOUNCED THAT HE S MOVING FROM HIS DRAG PAK CHALLENGER TO A MUSTANG COBRA JET, AND THAT HE LL TEAM UP WITH YOU. HOW DID THAT COME TO BE

We had become friends with Geoff and his wife, Sandy, and they're two of the finest people I've met in my life. Geoff would give me honest answers on things and he would help me. He's brilliant and passionate, and he was so successful with the Mopar, we started thinking Why don't we try to get him to run a Ford, and we finally convinced him. We'll be working side-by-side to share information about our Cobra Jets in an attempt to accomplish what we think we can accomplish with them. It will be good to put our heads together, and we'll have support from Mike Delahanty and his gang at Ford Performance. I think we'll see some exciting runs out of the Cobra Jets. I want to see a Ford in the winner's circle. I don't care if it's my Cobra Jet, Geoff's Cobra Jet, Chuck Watson's Cobra Jet or anyone else's Cobra Jet. We're Ford people.

They're building them now and we may be able to get it at the beginning of the year. Tony Bischoff is going to work on our 5.0 Coyote engine that comes in the cars. We think it will be even better than the car we have now. Not a lot better, but better. The engine should be a little more powerful. We're hoping to dial in the new car, get it to run well, even in the warm weather, and get it to run 7s as often as we can. I want to keep the Big Three interested in this sport and grow this class. I have made some great friends and we all help each other at the track. The guys and girls we race with have become my extended family.

WILL YOU TALK ABOUT THE INSPIRATION BEHIND YOUR IMPASSIONED SPEECH AT THE 50TH ANNIVERSARY COBRA JET REUNION, WHICH WAS HELD LAST AUGUST IN CONJUNCTION WITH THE 17TH ANNUAL NMCA ALL-AMERICAN NATIONALS AT SUMMIT MOTORSPORTS PARK IN OHIO

It was important to me because my father helped invent the Cobra Jet, and to be there speaking was an honor. In addition to that, hearing what people were saying about him was very touching. My father did a lot for Ford and Ford has done a lot for us. My father was hardworking, and he loved his family, his friends and Ford Motor Company. That was his life. Before my father passed away on January 8, 2010, he took us in a room and said I'm leaving you an impeccable reputation, and don't wreck it. We told him, and I'm telling you, we won't. The legacy and the tradition carry on.

(Interview, with more pictures, in the February 2019 issue of Fastest Street Car)