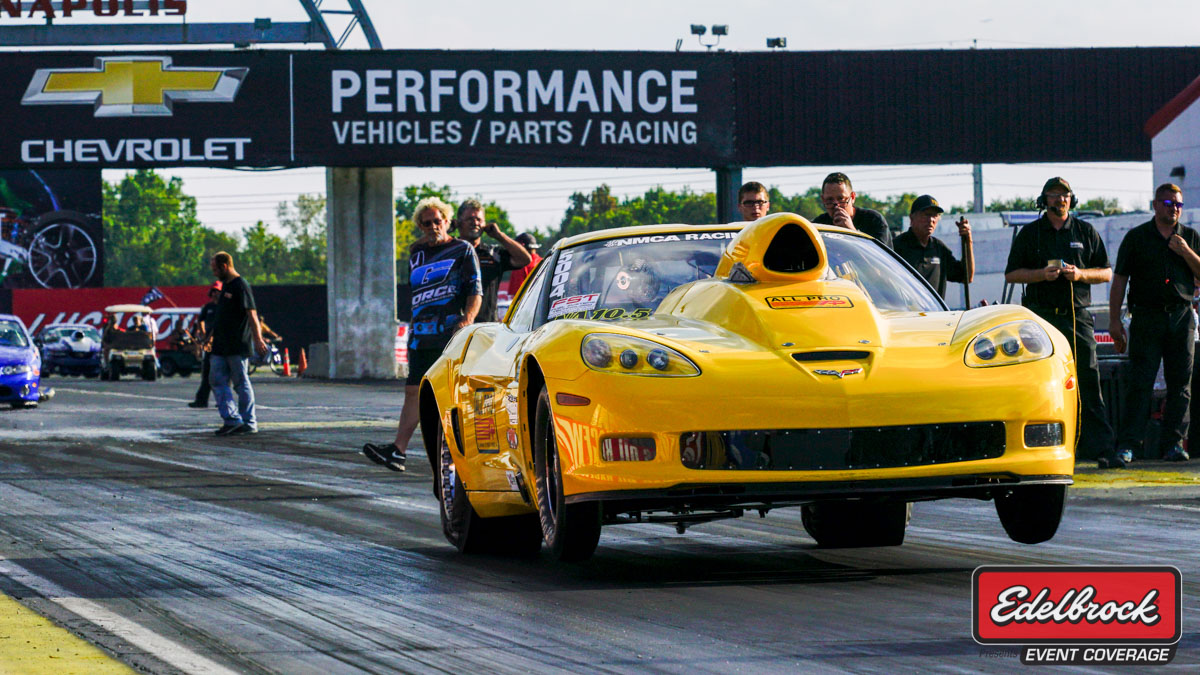 Qualifying begins today for the 18th Annual NMCA World Finals presented by Chevrolet Performance here at Lucas Oil Raceway at Indianapolis and the cars were flying in yesterday's test and tune session. If you can't make it to the track, be sure to log on to www.speedvideo.com and watch all of the action as it happens.

With its midwest location, this event has always been popular with the VP Racing Fuels Xtreme Pro Mod class runners, and Craig Sullivan brought his fan favorite Mopar, which has been running really well as of late. Sullivan is entertaining offers for the rustic-wrapped machine, as he has plans for a new build.

For those of us who watched Billy Glidden and his black Mustang in it's heyday, it's a real treat to see the car in action again. Glidden put down a 4.37 and a 4.43 in yesterday's testing, both very competitive times for the ARP Nitrous Pro Street class he'll be racing in this weekend.

Defending Xtreme Pro Mod champion Jason Hamtra is on the property this weekend, and a testy transmission solenoid prevented them from making a hit yesterday. Having been the only Pro Mod in the 3.6s last year, perhaps Hamstra will be able to mount a challenge to Don Walsh Jr. who has been leading the field in points this season and clicked off a 3.66 at the last race in Norwalk.

There are plenty of late-model HEMI-powered machines on the property already, as this event had a big turnout for the Mopar faithful. Rumor has it that NHRA Top Fuel Funny Car driver Tommy Johnson Jr. will be competing in the Dodge // Mopar Hemi Shootout, not in his fuel car of course, but in his Challenger Hellcat street car.

This event marks the competition debut for Jeff Rudolf with his new ProLine Racing Hemi combination under the hood of his Pro Mod Camaro. Rudolf's machine recently underwent the conversion from big-block Chevy to ProLine Hemi, with this particular bullet using the new raised cam Hemi from Alan Johnson Performance Engineering. Handling car chief duties for Rudolf this weekend is Tim Davis, who is working with Jamie Miller on the tuning calls. The Hemi is an NHRA-spec combination, but Rudolf plans to pick and choose events in 2020 and run a combination that keeps things fun.

Lafayette, Indiana's Dustin Wheelock is a former LSX Rumble and True Street racer that has since moved up in a big way with his Mike Alsop Chevrolet 2019 COPO Camaro. Wheelock debuted the Camaro at the Chevrolet Performance 50th Anniversary COPO Camaro Shootout at the last NMCA race in Norwalk, Ohio, and had such a great time that he will wrap up his season here in Indy and run the full NMCA schedule in 2020. His COPO currently runs the factory built, Magnuson supercharged Chevrolet Performance LSX engine combination.

This beautiful black Camaro caught our eyes this morning as cruised it through the pits to warm it up so we stopped and met with its owner, Mark Black, of Bridgeport, Ohio. Black has owned the car for 25 years and it recently received the sick black hue just a few years ago. It's powered by a 489ci big-block Chevy that is backed by a Turbo 400, and the Camaro runs 10.90s on motor alone. It's more street car than race car, but Black will be running in the brackets this weekend with it.

Nostalgia Super Stock racer Dave Schultz has come up with some interesting paint graphics on his 1960 Plymouth wagon, but we think we like this new woodgrain wrap the best. The car was never offered with it from the factory, but it sure is fitting.

Making their debut in ARP Nitrous Pro Street this weekend is Vince Khoury and his son Vince Jr. Sr. picked up with Jerry Bickel, built Firebird just a month ago. Sr. used to campaign a Firebird just like this in NHRA Pro Stock back in the late 90s and still had his old Dart-based big-block Chevy engine to stuff in the new car. It's backed by a Liberty manual transmission, and Vince Jr. will be making his first passes in this big-tired car this weekend. The Khoury's normally compete in the NA 10.5 category with their Mustang, but Vince's other son, Rocko, is slated to drive that in 2020 as the family campaigns two cars.

With his supercharged pickup truck sidelined, Grady Alley had to borrow his wife Debbie's daily driver so he could go racing this weekend. While Alley normally races in Gear Vendors True Street, he has wheeled his wife's 2018 Durango R/T before in the Dodge // Mopar HEMI Shootout and taken the 15-second win, most recently at the last race in Norwalk, and plans to follow that up with another win this weekend.

Matthew Dakin of nearby Danville, Indiana, normally runs the bracket program here at Lucas Oil Raceway at Indy with his 1964 Plymouth Valiant, and having visited the NMCA Finals here last year, decided to sign up for the bracket classes this weekend.

At the urging of Coan Engineering Stock/Super Stock racer Dennis Breeden, Jeremy Duncan is making his NMCA debut this weekend in the same class. The Charleston, Indiana, resident is racing his 1969 350/300hp SS/GA Camaro, which is the same car his father built and raced back in 1989. It's Jeff Taylor-built small-block has propelled the machine to a best elapsed time of 9.55, and it is sponsored by the family business, Mr. Pest Control.

Kevin Czajkowski (pronounced chy-cow-ski) has been a Ford fan ever since his dad sent him to go pick up an abandoned pickup that happened to have an old Ford 427 FE race engine in the bed. The lifelong Buick/GMC technician equipped his '66 Ford Fairlane with a 506ci FE engine that's built on a Genesis FE block, and the car has been 9.40s.

As this race is going down in Indy, it's no surprise to see a number of NHRA racers and crew members attending the race, since many of those teams are based here. Gary Pritchett is entering his 2011 GT500 Mustang into the car show this weekend in hopes of finding a prospective buyer for it. The car's upgrades were originally commissioned by Jason Miller with help from Rhodes Custom Auto and JPC Racing, and it's Rich Groh Racing Engines 5.4-liter-based power plant has pushed it to high 8s with the big Whipple blower on it. Currently it sports a smaller 2.9-liter supercharger but will run low 9s consistently through it's 4L85 automatic transmission. And it only has 13,000 original miles on it!

Edelbrock Xtreme Street racer Tony Orts is known for his occasional huge wheel stands and fans here at Lucas Oil Raceway got to see one of them today. Unfortunately, Orts came down near the wall and contacted it, damaging the First-Gen Firebird substantially. First round of qualifying is in the books. Get the results <<<HERE>>>   Saturday's Schedule 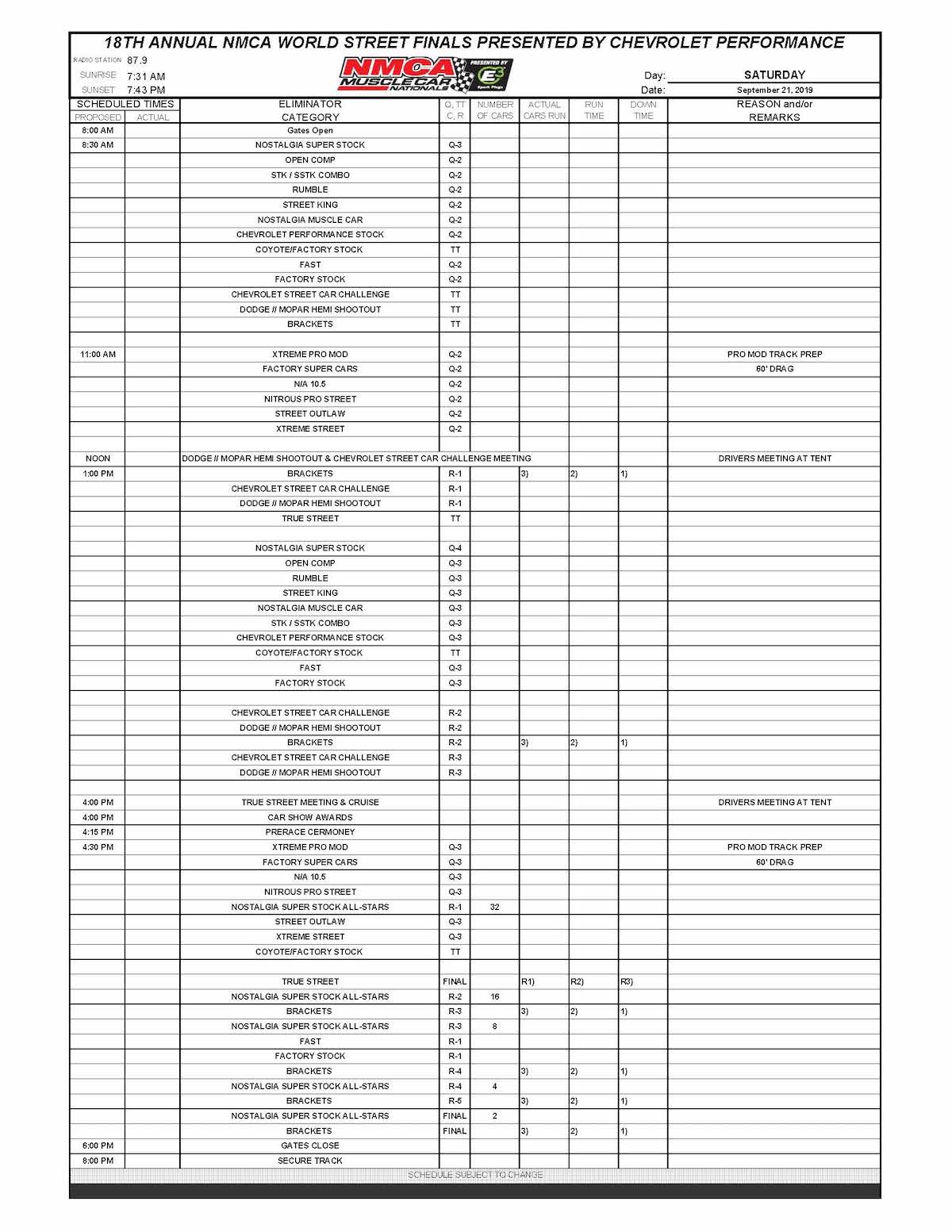