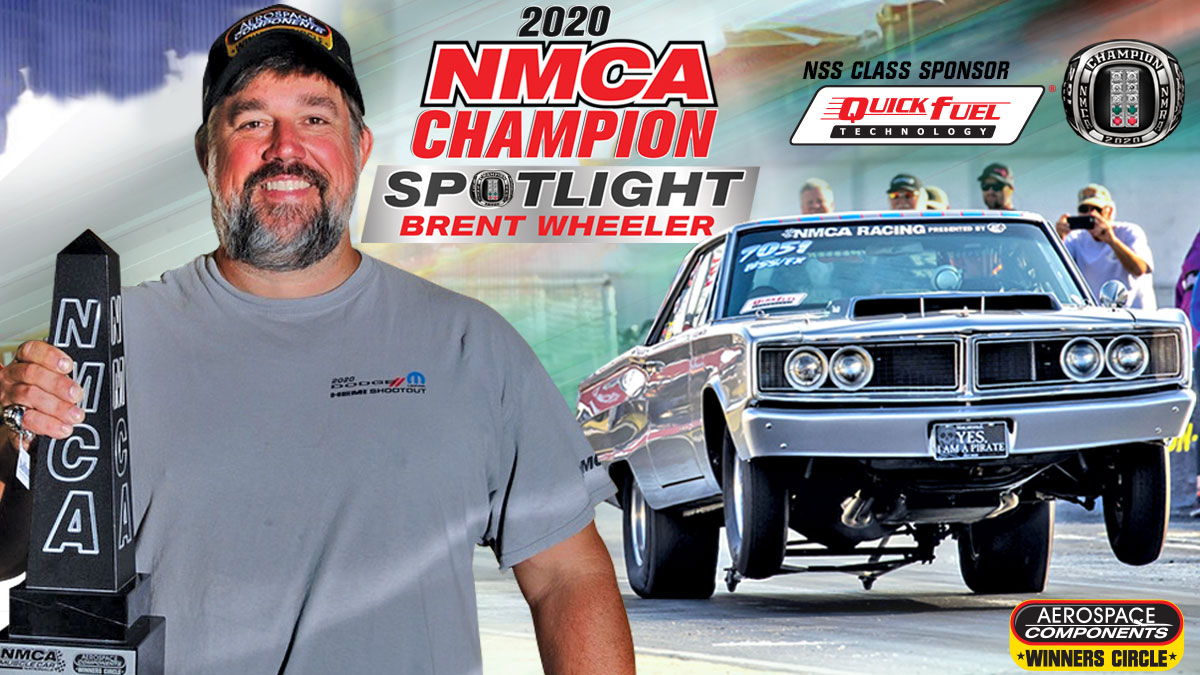 By Mary Lendzion The NMCA Quick Fuel Technology Nostalgia Super Stock category has some of the coolest cars in the country, and some of the most competitive racers in the country. Among them is Brent Wheeler, who routinely records good reaction times and consistently runs close to, or right on, his index in his 1966 Coronet. The Georgia-based driver who came to the category in 2014 has held his own through the years, with help from his 540 cubic-inch Wedge engine that was built by fellow racer Bill Boomhower, and topped with heads and intake by Indy Cylinder Head and two Edelbrock carburetors. This year, Wheeler qualified in the third spot with a 9.505 on a 9.50 index and finished as the runner-up with a 9.51 at the season-opening 18th Annual NMCA Muscle Car Mayhem presented by Holbrook Racing Engines in March at Bradenton Motorsports Park in Florida. Starting the season off with a trip to the final in Bradenton was a confidence builder for sure, said Wheeler. He then qualified in the fourth spot with a 9.757 on a 9.75 and lost in the second round of eliminations with a 9.77 at the 12th Annual Scoggin-Dickey Parts Center NMRA/NMCA All-Star Nationals in June at Atlanta Dragway, and qualified in the second spot with 9.755 on a 9.75 and lost in the third round of eliminations with a 9.79 at the Nitto Tire NMRA/NMCA Super Bowl presented by HPJ Performance in early August at World Wide Technology Raceway in Illinois.

While the Coronavirus pandemic prevented NMCA from having its annual ceremony to celebrate champions, each was invited to share the words they would have shared on stage in front of their fellow racers, family and friends. HOW DOES IT FEEL TO HAVE EARNED A CHAMPIONSHIP DURING SUCH AN UNUSUAL SEASON It makes it special for sure. We were fortunate to have our normal points contenders at all of the events during trying times. Nothing about the season was normal or easy. Even the trip planning was difficult. You just didn't know what you would encounter from trip to trip. WHAT WAS THE BIGGEST CHALLENGE THAT YOU OVERCAME ON YOUR WAY TO EARNING THE CHAMPIONSHIP Mindset. I was fortunate to have worked all through this strange year. I have worked more than normal. Trying to keep work, family, and racing balanced and not to fall into a trap of stressing over what you cannot control. DO YOU HAVE FAMILY AND FRIENDS WHOM YOU WOULD LIKE TO THANK I want to thank my wife, Jessica Wheeler, for supporting our efforts, our children, my daughter, Payton Wheeler, who's a crew member, my father, Andrew Wheeler, who's a crew member, fellow racer, my biggest supporter and fan, as well as my hero. I also want to thank Bill Boomhower, who is my friend and mentor I could not do this without him and last but not least, Chad Brewer and Ron Tiller. ARE THERE SPONSORS YOU WOULD LIKE TO THANK Thank you to QuickFuel Technology for sponsoring the Nostalgia Super Stock class. WHAT DO YOU ENJOY ABOUT RACING IN NMCA QUICK FUEL TECHNOLOGY NOSTALGIA SUPER STOCK Nostalgia Super Stock is a fun class. It's a drivers class. It's a tuners class. The nostalgia aspect makes it a challenge. You have induction rules. You have limited ways to set up for an index. It's a true footbrake, non-electronics class. No transbrakes, no electric or air shifters, no two-steps to launch with. The NMCA is truly a racers-first organization. I have raced in many areas, classes, and organizations over the years. There is not a better organization to be a part of.
Brent Wheeler
,
Dodge Coronet
,
Nostalgia Super Stock
,
Quick Fuel Technology Nostalgia Super Stock