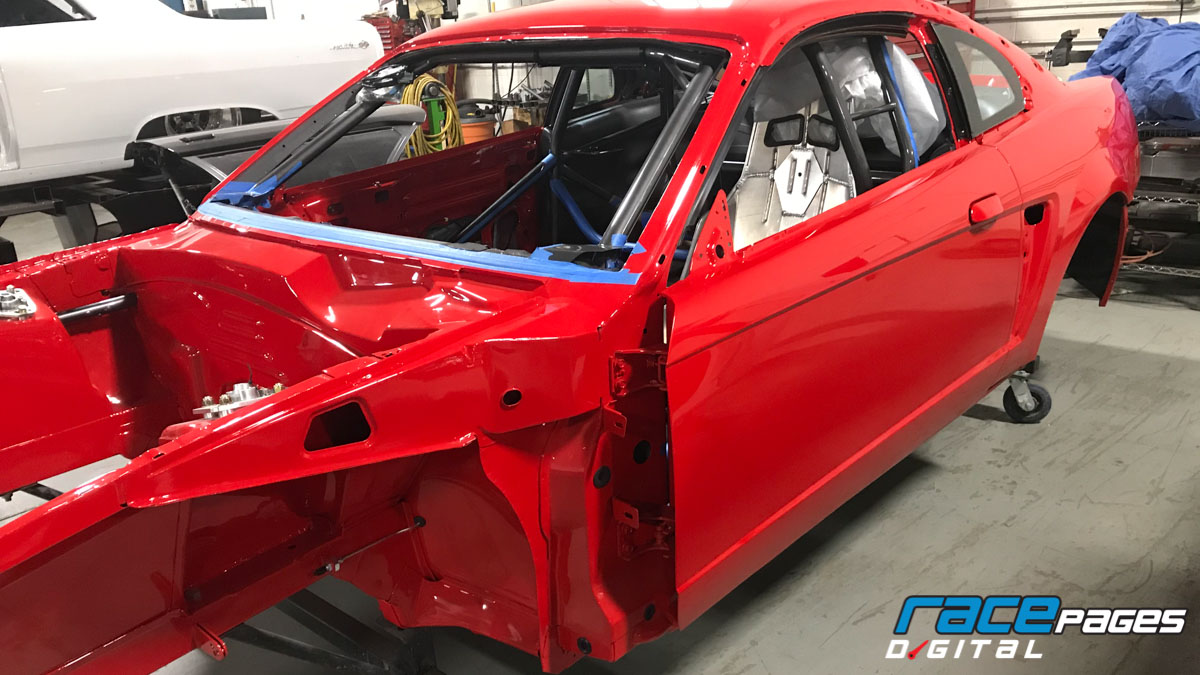 At the end of the 2020 NMCA Drag Racing season, Holley EFI Factory Super Cars racer Chris Holbrook parted ways with his Cobra Jet Mustang to concentrate on customer engines. As it turns out, Holbrook will be concentrating on another racing program as well, as he and Whipple Superchargers are planning to step into VP Racing Lubricants Xtreme Pro Mod for 2021. As the headline states, the duo isn't stopping there, as they have procured a second car to race in the Edelbrock Xtreme Street category, covering both big- and small-tire classes. And as you can additionally infer from the title, both cars will be equipped with Whipple Superchargers. Both Holbrook and Whipple were doing a superb job at keeping the projects a secret until Whipple blew it wide open by posting this video of the first engine on the dyno. This test mule is based on a standard bore, Bear Coyote block with GT350 cylinder heads, a 3.800-stroke Sonny Bryant crankshaft, custom Holbrook Racing cams, Diamond Pistons, Bill Miller aluminum connecting rods and Total Seal rings. Packing a miniscule 315 cubic inches, the Coyote is boosted by a 3.8-liter, rear-entry Whipple twin-screw supercharger and with the Big Stuff IV EFI system calling the shots, the VP Racing Fuels C16-burning mod motor made 2,069 horsepower before Holbrook cut it a bit early on the dyno pull. I think there is more to be had, Holbrook said. It was more to just get data for the supercharger. We're going to disassemble the engine, inspect it, and hopefully find some more [horsepower]. Chris has built some amazing engines already, so we knew there was potential there, said Whipple Supercharger's Dustin Whipple. It was shocking to see. Years ago, it took billet blocks, huge cams, and more to achieve that. The gains since then from the heads, cams, and blowers is mind blowing. From the data, blower speed, and boost, we know there's more in it. We need to make sure the heads are gonna stay on the engine.

While Holbrook has plenty of experience with Coyote engine of all sorts, a full beans Coyote build allowed Whipple to explore what is beyond the street and Cobra Jet markets from a blower standpoint. We threw the supercharger together really quick. It's a test case rotor housing we use for production kits and a manifold for Coyotes. It also uses a Ford GT cable-drive throttlebody, Whipple explained. While this current configuration utilizes a top-mounted blower, Whipple indicated they will likely move to an inverted style of intake manifold where the intake charge passes through the intercooler core twice, more along the lines of the 3.0-liter Cobra Jet blower. Some of this is just to figure out what size blower capacity we will need, Whipple said. Next up is a better block and heads. It was an engine we did for a customer for Xtreme Street, Holbrook explained of how the whole project got started. He decided he wasn't going to pursue finishing his car, so I'm buying everything back from him. Not only did he purchase the engine back, but he also bought the car, a new-edge SN95 Mustang built by Team Z Motorsports. The previous owner, Bruce Tronolone, had originally planned to enter the NMRA Coyote Modified category with a turbocharged combo, but later switched to NMCA Xtreme Street/NMRA Renegade and that's when Holbrook convinced him to go with a Whipple supercharger. While he has parted ways with his project, Tronolone hasn't walked away from it completely. I think he's going to help with finishing the car and putting it together and helping us at the race track, Holbrook said.

Holbrook and Whipple are continuing to develop the Xtreme Street combination, but they're also full speed ahead on the Xtreme Pro Mod project and hope to debut it at the NMCA season Opener in Bradenton. Dustin and I started talking and we both said, let's try this, Holbrook told us. It's a group effort and I think it's going to be a fun project. A rendering of the car is in the works, but Holbrook has already acquired a chassis, built by Joe Peters, and, of course, a Mustang body to go on top of it. The modern powerplant will be backed by a Neal Chance lockup with Quickdrive and a Liberty five-speed transmission. As the MMR Pro Mod team has shown, the Coyote can be competitive, and Holbrook and Whipple plan to step up the Pro Mod engine to an MMR billet block and heads versus the Bear/Ford components they are currently using on the test mule. The Pro Mod engine is going to be 375 cubic inches and we're using an MMR billet block. I think it will be ready in about two weeks, Holbrook said. Meanwhile, Whipple is cooking up something big on the blower side of things. The Pro Mod is going to be a bigger engine, and we'll need a drag-specific blower that is much bigger, Whipple explained. It'll be a top-mount version on methanol so no intercooler, and we plan on it being about a 9-liter with a billet manifold, billet runners, and injector plate. The goal is to use it for other Pro Mod classes. We'll adapt it to a 6-71 style, so it'll be usable on most current Alan Johnson engines. People have been asking us for a long time about building big race blowers. In the old days, we built a 9.8-liter all through 90s, and designed a 10.8, but never put it into production. Right now we have an 8.3, but it's old technology. While the current test engine has made in excess of 2,000 horsepower, Holbrook said they will need to make over 3,000 for the Pro Mod build. The MMR Pro Mod Mustangs have easily eclipsed that with their twin-turbocharged combinations, so the engines can support it. It sure will be exciting to see a screw-blown Pro Mod-spec Coyote engine And if two builds were a tall order to meet for the NMCA opener at Bradenton Motorsports Park in Florida in March, Holbrook also said his son, Del, will be joining the team this season as well with a third car. Holbrook is putting a 2016 Mustang together with a naturally aspirated Coyote for the Stock/Super Stock Combo class, with hopes that Del will eventually take over the driving duties of the Xtreme Street car. He also said that they have a Fox-Body Mustang with an NA Coyote swap that his daughter Sabrina can drive in some Open Comp races.
Edelbrock Xtreme Street
,
Holbrook RAcing Engines
,
VP Racing Lubricants Xtreme Pro Mod
,
Whipple Superchargers