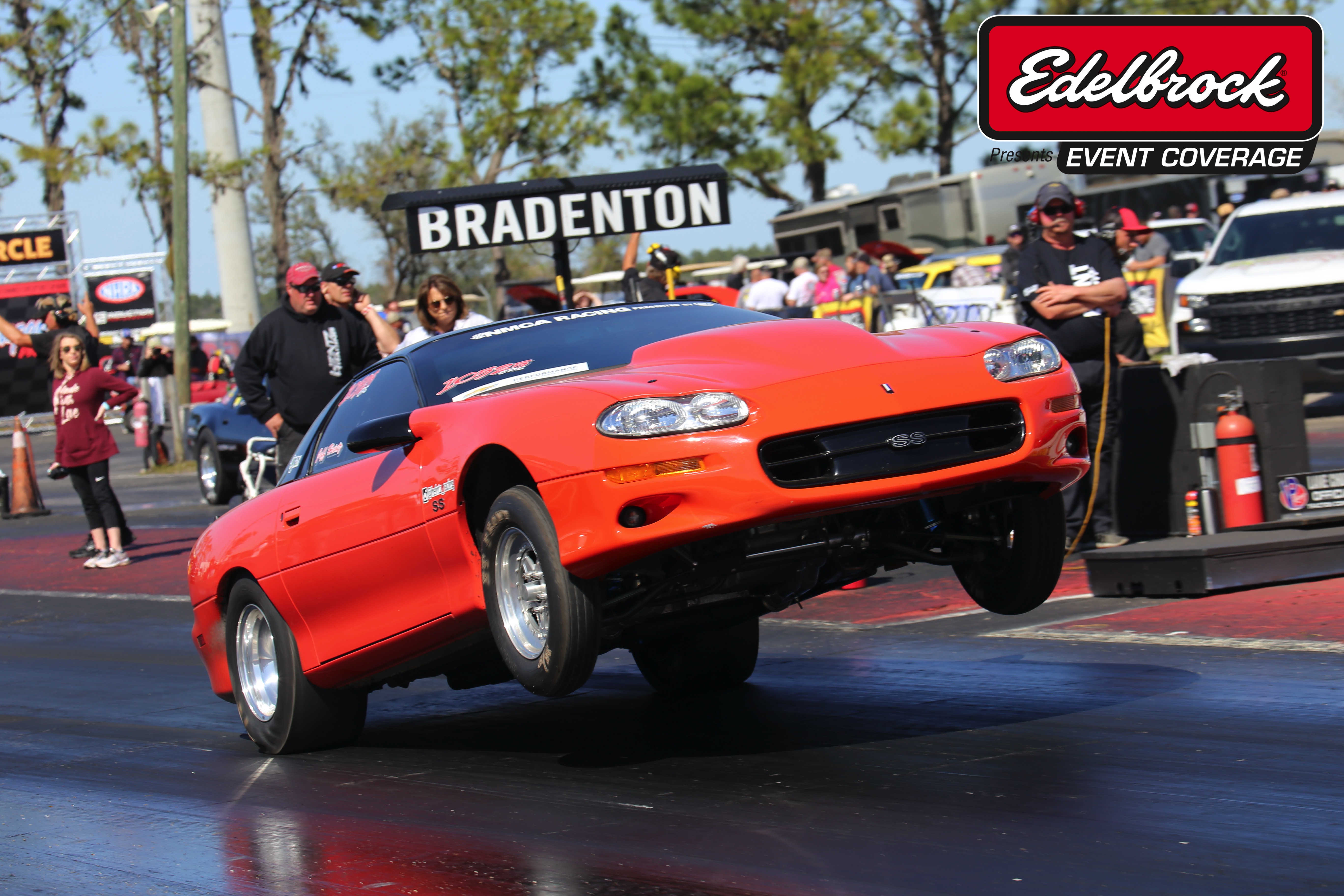 The ladders are set and the matchups are crucial as the 18th Annual NMCA Muscle Car Mayhem Presented by Holbrook Racing Engines sends classes into eliminations. Vying to collect round wins in hopes of visiting the Aerospace Components Winner's Circle with the first wins of the season, racers will lay it all on the line today. Adding even more excitement to today's program, the top eight finishers from yesterday's Dodge // MOPAR HEMI Shootout compete in the Arrington Performance HEMI Quick 8 presented by Red Line Oil. The winner of this heads-up competition scores $800 cash and an NMCA Victor award. Look for updates throughout the day from Bradenton Motorsports Park.

To check out the full qualifying results, click HERE. 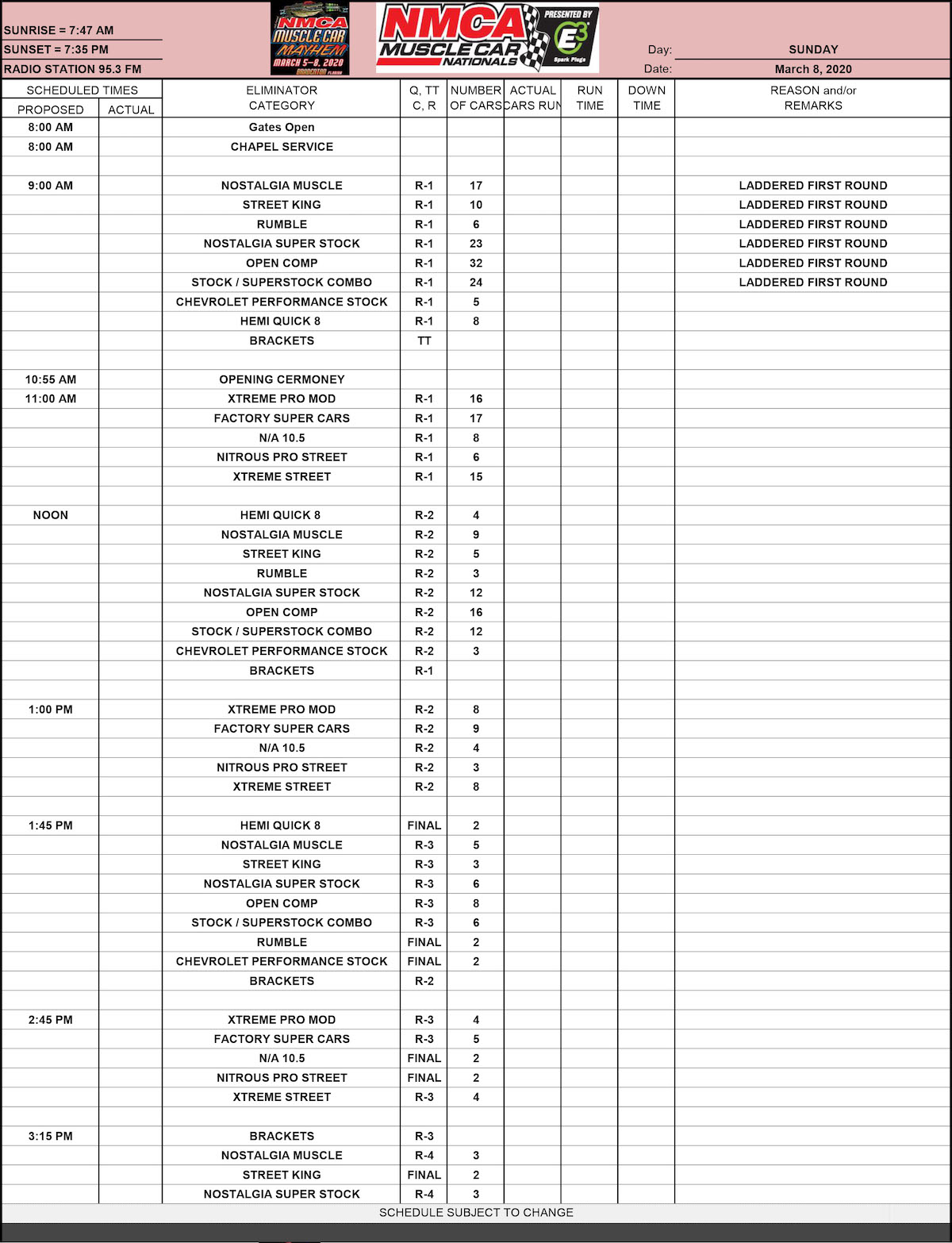 After Chuck Watson Sr. pedaled to a 7.90 and a win in Round 1 of Holley EFI Factory Super Cars, the Watson Racing team is confident his Cobra Jet has the steam to go rounds. It's just a matter of putting that power down as the stakes get higher and the tuneups get hotter at the 18th Annual NMCA Muscle Car Mayhem Presented by Holbrook Racing Engines.

In the off-season Susan Roush-McClenaghan made several upgrades to the Coyote engine powering her 2010 ROUSH Mustang. Among the upgrades were Gibtec pistons and longer cylinder sleeves, which she says greatly improved the powerplant's efficiency. She is happy with its performance thus far, having raced last weekend with NMRA and continuing on in MagnaFuel Open Comp at Bradenton Motorsports Park. Her weekend ended in the first round with a loss to Mike Roup, but she is eagerly anticipating another full season of racing in 2020.

JLT Performance's Jay Tucker is staking claim to running the first 9-second pass in a widebody Charger. Benefitting from a JLT Performance intake , Metco blower pulleys, Injector Dynamics ID1050 injectors, an HP Tuners calibration by DTP Racing, and a VMP Performance 105mm throttle body, his 2020 Dodge Charger SRT Hellcat Widebody was one of the eight quickest cars in the Dodge // Mopar HEMI Shootout on Saturday, thus earning a spot it today's Arrington Performance HEMI Quick 8 presented by Red Line Oil. He set the goal of running the car in the nines when he bought it, and he emphatically proved its performance credentials with a 9.65 at 142.25 blast it the first round of Quick 8 competition.

After encouragement from Dennis Breeden and Doug Duell, Jeremy Duncan brought his 1969 Camaro out to its first NMCA race in Indy last season. He must have liked it, because he was back running in the Coan Engineering Stock/Super Stock class at the 18th Annual NMCA Muscle Car Mayhem Presented by Holbrook Racing Engines. Driving the car his dad first built back in 1987, Duncan qualified eighth and notched a round one win with a 9.646 on a 9.63 dial-in. He plans to make the next race and if he does well, Duncan might just keep running the series.

It's common to see Coyote-powered stallions cranking out four-digit horsepower, but this weekend in MagnaFuel Open Comp Paul Hosick is making laps in his 1,100-horsepower-capable 2010 Mustang. Sporting a 5.3-liter, stroker Three-Valve Modular engine (based on a Ford Performance Boss 302 block topped by CNC ported heads), the twin-turbo machine races at about 850 horsepower. He ran in Modular Muscle at the NMRA event last weekend, and is vying for a trip to the Aerospace Components Winner's Circle against stiff competition at Bradenton Motorsports Park.

Sorting out a new combination at the 18th Annual NMCA Muscle Car Mayhem Presented by Holbrook Racing Engines is Edelbrock Xtreme Street racer David Witt. Having completely rebuilt the car over the winter, Witt is now running an MMR-built 5.0-liter engine boosted by a Whipple supercharger. He was attempting to wire an interior light in the pits, as he could n't see any of the controls and switches in the car after the sunset.

Powered by a fresh 526-inch Chevrolet big-block, Rob Cox's 2017 Camaro is running well at Bradenton Motorsports Park. Boosted by twin 94mm turbos and shifting gears with a Liberty five-speed/Bruno torque converter combo, Cox is confident he can run with the VP Racing Lubricants Xtreme Pro Mod pack, as his car is capable of 3.60s if he can get a hold on the new combination. He plans to run the full NMCA Muscle Car Nationals series and he may swap to a Hemi engine mid-year.

After having issues with his eyes, Jim Bailey is cleared and ready to race in Coan Engineering Stock/Super Stock at the 18th Annual NMCA Muscle Car Mayhem Presented by Holbrook Racing Engines. His latest ride started life as a 1977 Dodge Aspen, but now runs as a 1976 Plymouth Volare in deference to the combo's power rating. Bailey, who won Top Fuel at Bradenton Motorsports Park back in 1999, is running low 11s this weekend.

A horde of Hemi-powered machines competed in the Dodge // Mopar HEMI Shootout at the 18th Annual NMCA Muscle Car Mayhem Presented by Holbrook Racing Engines. For Scott Miller it was his first time running in the class with his 2017 Challenger Scat Pack, which was inspired by a friend who competed last year. His ride averaged 11.96 in three back-to-back runs courtesy of some choice mods, including a high-flow exhaust, a muffler delete, 3.90 gears, a Hemi Fever tune, and ported intake/throttle body. 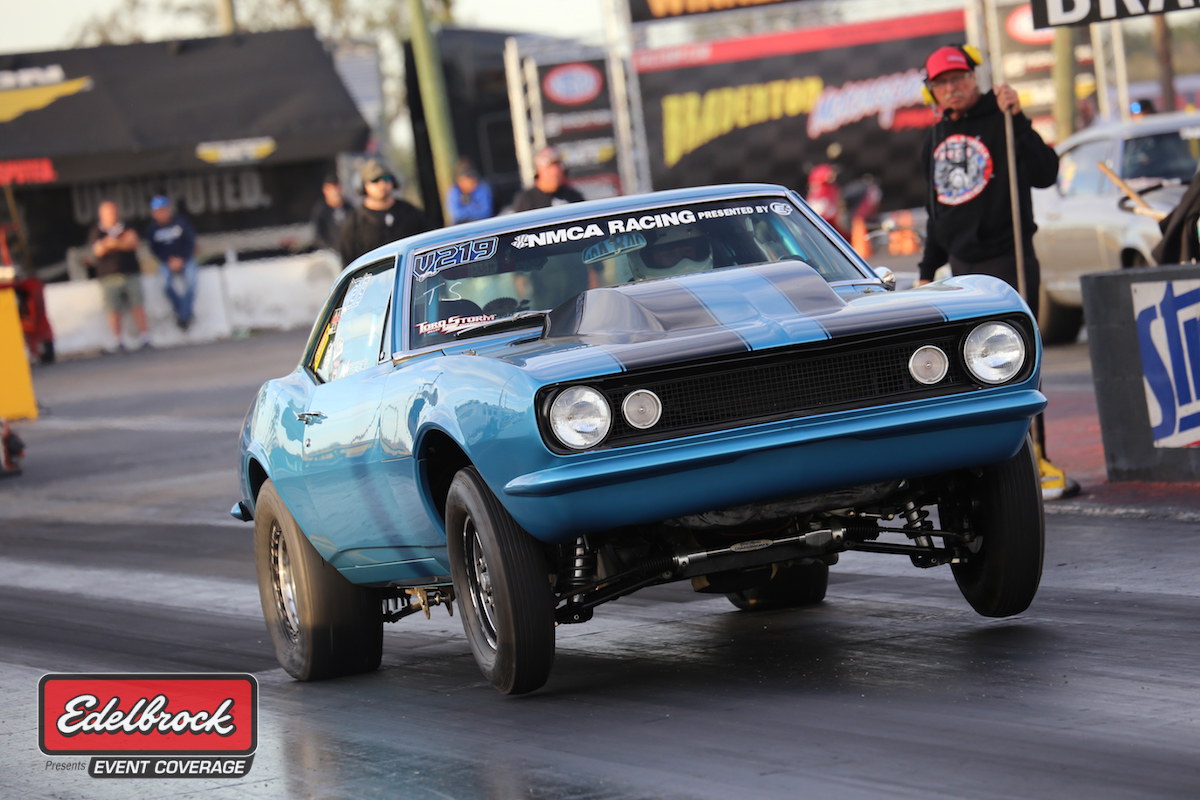 Drivers taking part in TorqStorm Superchargers True Street were led by Drag Week winner Tom Bailey and his Camaro, and YouTube celebrity Cleetus McFarland, who was in the passenger's seat. Mike French, whose car is pictured, motored to the overall win with an 8.77 average, while Jason Rollins rolled to the runner-up finish with an 8.96 average. Willard Howard was the 9-second winner, Jeff Smith was the 10-second winner, Jeff Neibarger was the 11-second winner and Grant Martin was the 12-second winner. Jose Vera took the 13-second win, Jimmy Hodges took the 14-second win and Branden Arila took the 15-second win. 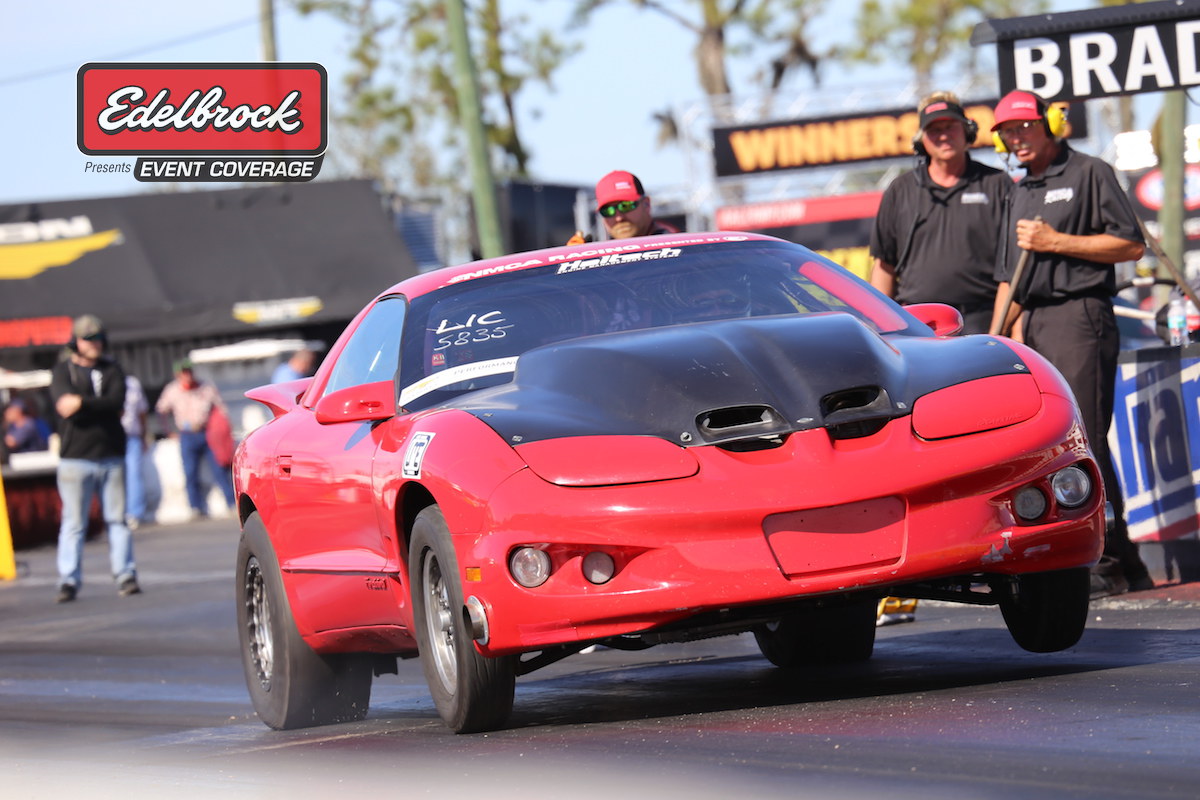 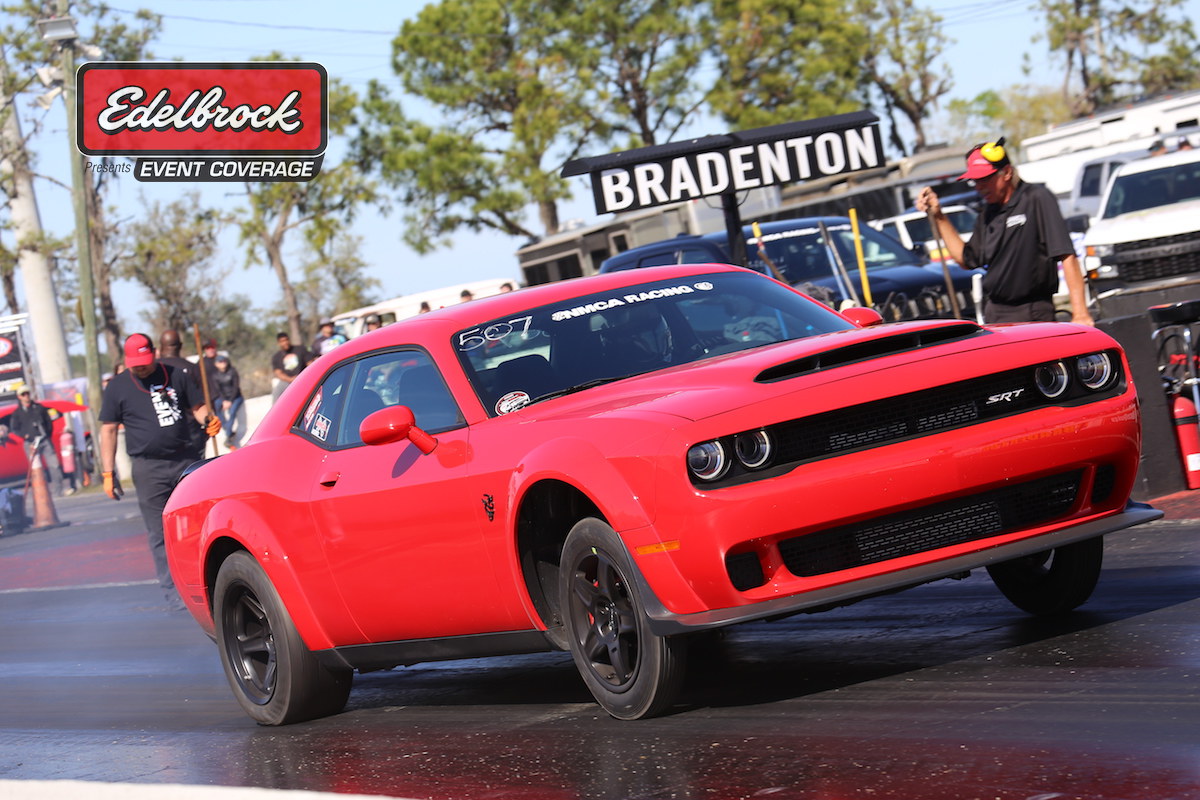 In the Dodge//HEMI Shootout, Lindsay Wheelock, whose car is pictured, earned the overall win with a 10.03 average, while Pete Mansolillo was the runner-up with a 10.07 average. Jay Tucker took the 10-second win, Nathan Washington emerged as the 11-second winner, Lee Segars landed the 12-second win, Brian Bednar was the 13-second winner, Dave Burnett was the 14-second winner and Tim Rickey rounded things out as the 15-second winner. 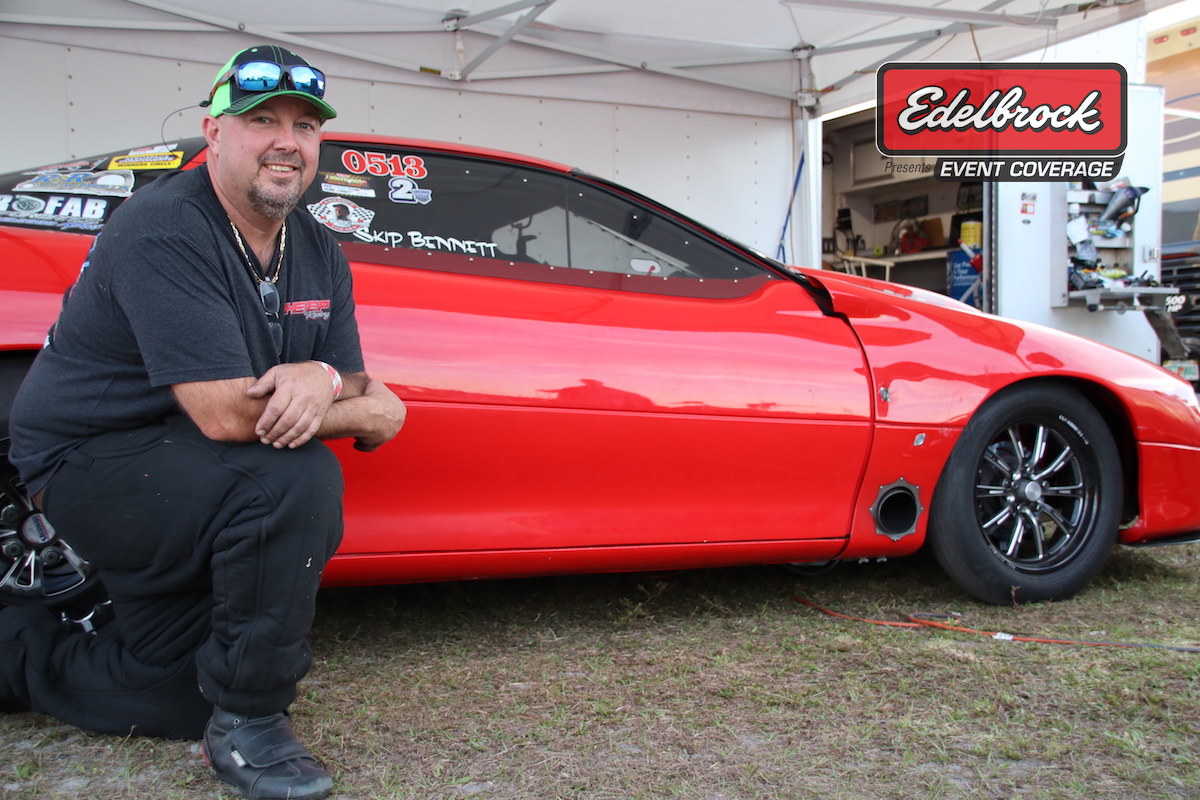 Brian Keep blasted to a 4.52 to set a record and to see his name at the top of the list in qualifying in Edelbrock Performance Xtreme Street, and he's ready for the first round of eliminations today. So is his Camaro, which features a 427 cubic-inch small-block Chevy by Hameetman Racing Engines and a ProCharger F-1A-91, and has an RPM Transmissions-built Turbo 400 to help put the power down. The weekend started out rough, as I exploded a gear drive on a test pass and then a throttle position sensor went bad on a qualifying pass, but it all worked out for qualifying, said Keep, who uses Haltech to tune. Keep, who has some support at the races from Tim Travis, also stands out in Ultra Street. 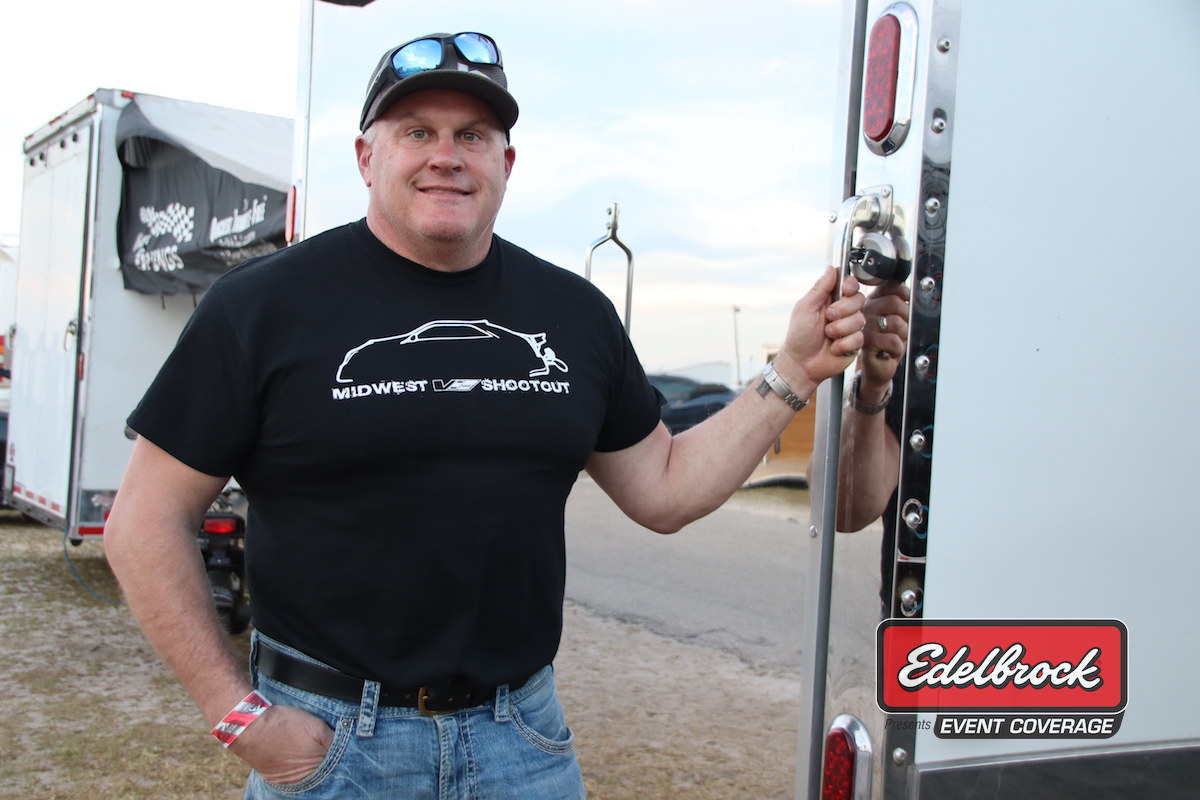 Lou Iacopetti accepted Scott Guiler's offer to climb into his Cutlass to compete in Edelbrock Performance Xtreme Street this weekend, and Iacopetti, who had never driven Guiler's car before, is handling it like a hot shot. He ran to a 4.76 to qualify in the tenth spot in the car with a big-block Chevy and nitrous, and said it feels like home and that he's ready for the first round of eliminations today. It's really an honor to drive Scott's car, and even more importantly, to have his trust, said Iacopetti. I'm enjoying this.

A wide array of performance parts and vehicles filled the manufacturer's midway at the18th Annual NMCA Muscle Car Mayhem Presented by Holbrook Racing Engines. Among the crowd was a significant machine in the Scoggin Dickey Parts Center display. One of two 2018 Camaro SS models assembled to put Chevrolet Performance's line of drag racing upgrades to the test, this car and its sister machine will appear next month at the 12th Annual Scoggin-Dickey Parts Center NMRA/NMCA All-Star Nationals.

Car shows at the NMCA Muscle Car Nationals series are all about variety, and there was plenty to be found at Bradenton Motorsports Park this weekend. Case in point was Alan Gregory's wild wheelstander. Powered by a blown 383 stroker, the 1962 Ford Falcon looked like it was ready to put on quite a show. 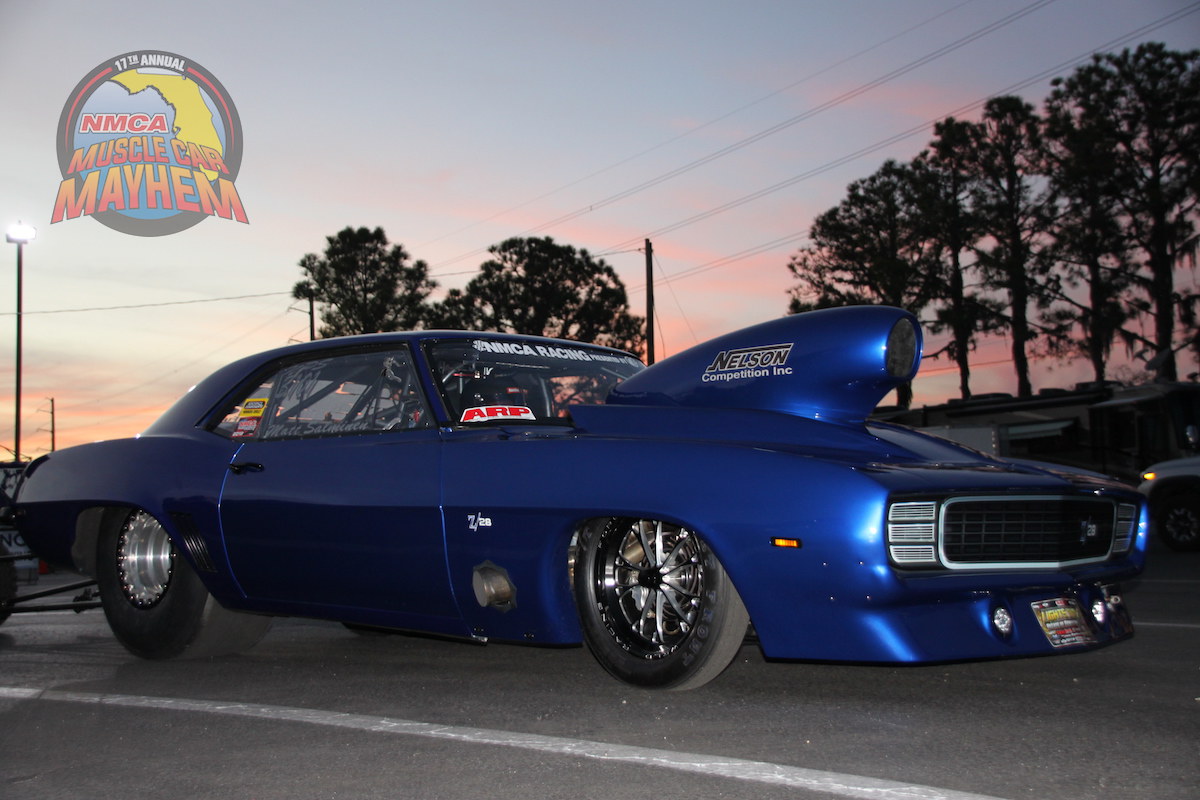 While we were used to seeing Matt Salminen behind the wheel of his beautiful blue Camaro in ARP Nitrous Pro Street, his son, Kyle, is piloting the car in the category this weekend at the 18th Annual NMCA Muscle Car Mayhem presented by Holbrook Racing Engines at Bradenton Motorsports Park. Like his father, Kyle knows what it takes to win, as he did just that at the U.S. Street Nationals in January here at Bradenton Motorsports Park, among other races. He qualified in the second spot with a 4.59 yesterday, and is ready to give it everything he has to get to the Aerospace Components Winner's Circle today. 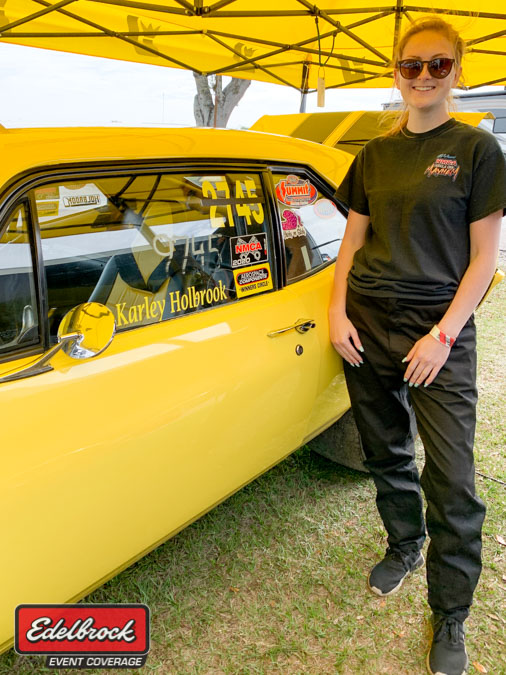 Karley Holbrook is a new face to the MagnaFuel Open Comp class but no rookie to the bracket racing world. She is a sophomore at the University of South Florida studying business management and wheels a beautiful 1970 Chevy Nova with 502ci big-block Chevy power in her off-time. Making it to the quarter finals in our bracket class yesterday, she is looking to go rounds again today. 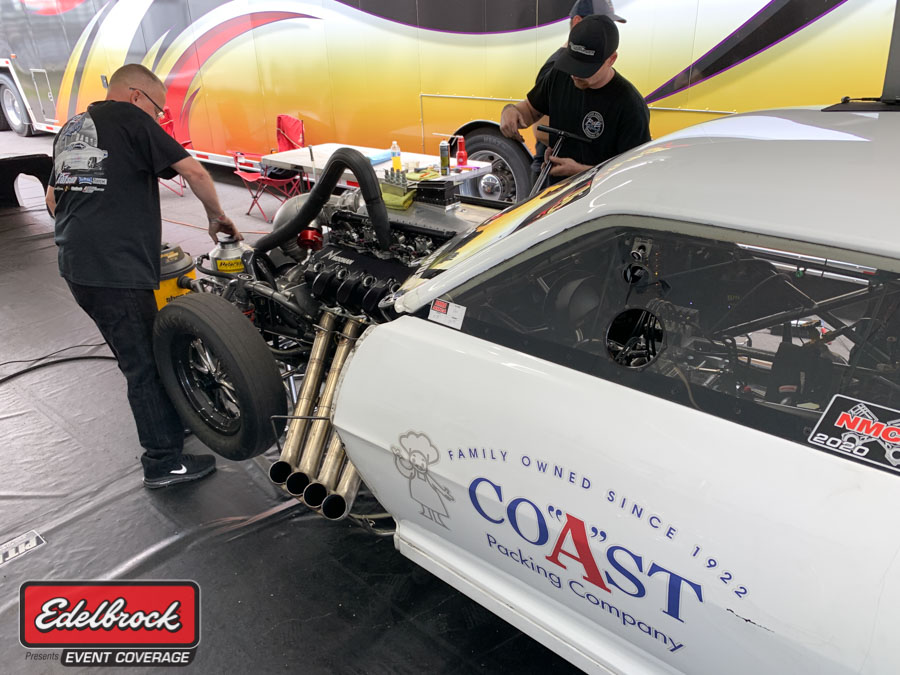 Eric Gustafson made it look easy first round of eliminations in Xtreme Pro Mod laying down an incredible 3.630. The lead up to that pass was far from easy after driver, Eric, and the crew of Cameron, John, Jason, and Patrick thrashed last night and into this morning dropping in a new motor and rewiring the monster. Without the support of Coast, back in Los Angeles, and the determination of the team, that incredible first round win could not have been achieved. Battling issues to even get the car to start after the big changes, they finally got it fired up just ten minutes before the round.
Bradenton Motorsports Park
,
Muscle Car Mayhem
,
nmca
,
NMCA Racing
,
Season Opener