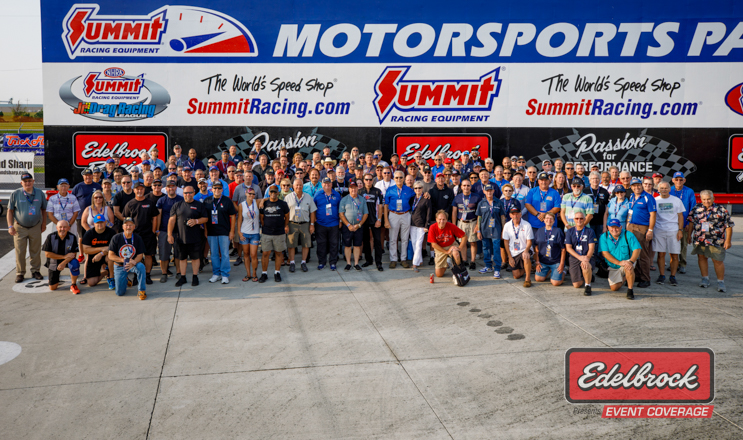 Last night the NMCA hosted the 50th Cobra Jet Reunion gala affair at the Saw Mill Creek Resort in Huron, Ohio, with more than 550 Cobra Jet owners, racers, Ford Motor Company and Ford Performance employees past and present, and fans in attendance. Guest speakers included Al Joniec, Carl Tasca Sr., Brian Wolfe, Mike Delahanty, Bill Barr, and it was certainly a can't miss event. This morning, we assembled many of those people for a group photo to continue the celebration. Hundreds of Cobra Jet-powered cars will be on display all weekend, and good luck to all those who will be racing today. 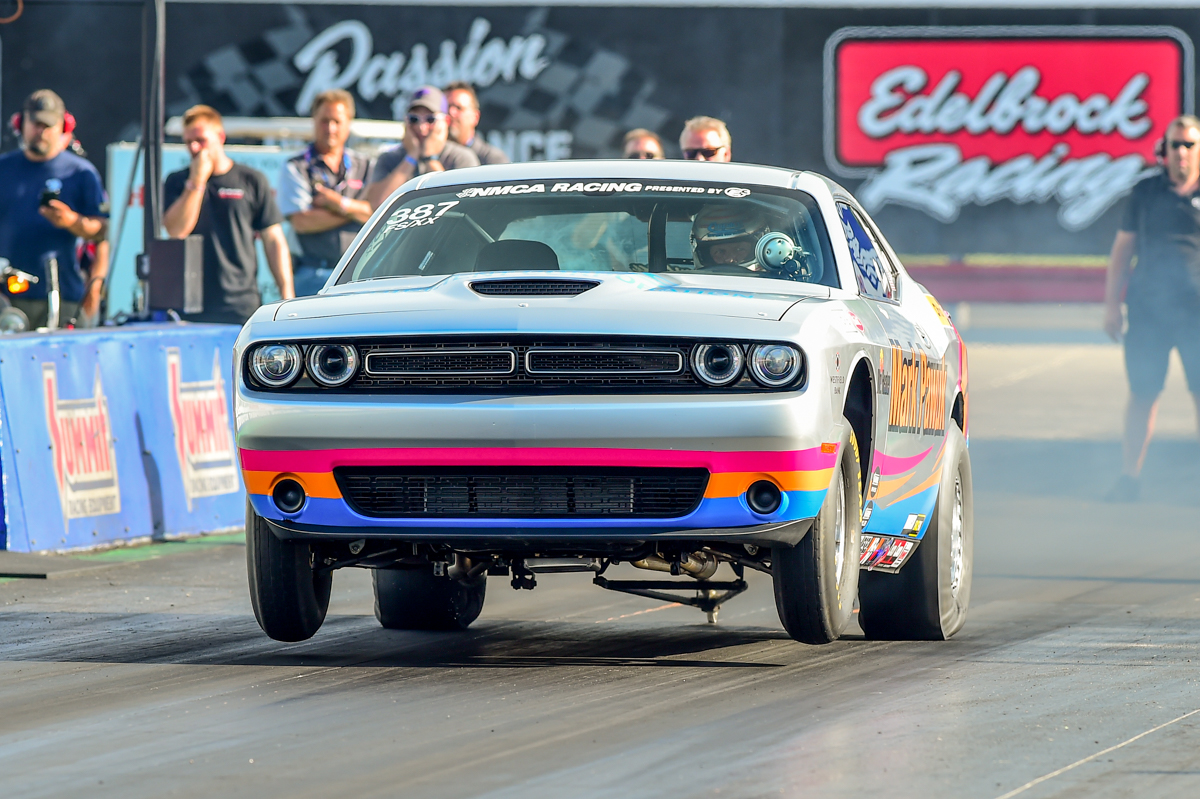 Drivers were hauling in the first round of qualifying yesterday, and among them was Jason Hamstra, who handled a 3.76 in VP Racing Fuels Xtreme Pro Mod, Tricia Musi with a 4.43 in ARP Nitrous Pro Street, Enzo Pecchini with a 4.08 in Mickey Thompson Radial Wars, Daniel Pharris with a 4.32 in Vortech Superchargers Street Outlaw, David Theisen with a 7.88 in Fuel Systems Technology NA 10.5 and Jessie Coulter with a 4.71 in Edelbrock Xtreme Street. Mark Pawuk (pictured) pushed to an 8.05 in Holley EFI Factory Super Cars, Terry Reeves ran to a 9.43 in Mickey Thompson Heavy Street and Dennis Breeden collected an 11.00 on a 9.50 in Coan Engineering Stock/Super Stock while David Dudek drove to a 10.22 in Baskin Truck Sales FAST. Audrey Baize recorded an 11.75 on an 11.75 in Detroit TrueTrac Nostalgia Muscle Car, Jeff Bourcier cruised to a 10.25 on a 10.25 in ATI Performance Nostalgia Super Stock and John Voshell Jr. was .001 in MagnaFuel Open Comp. 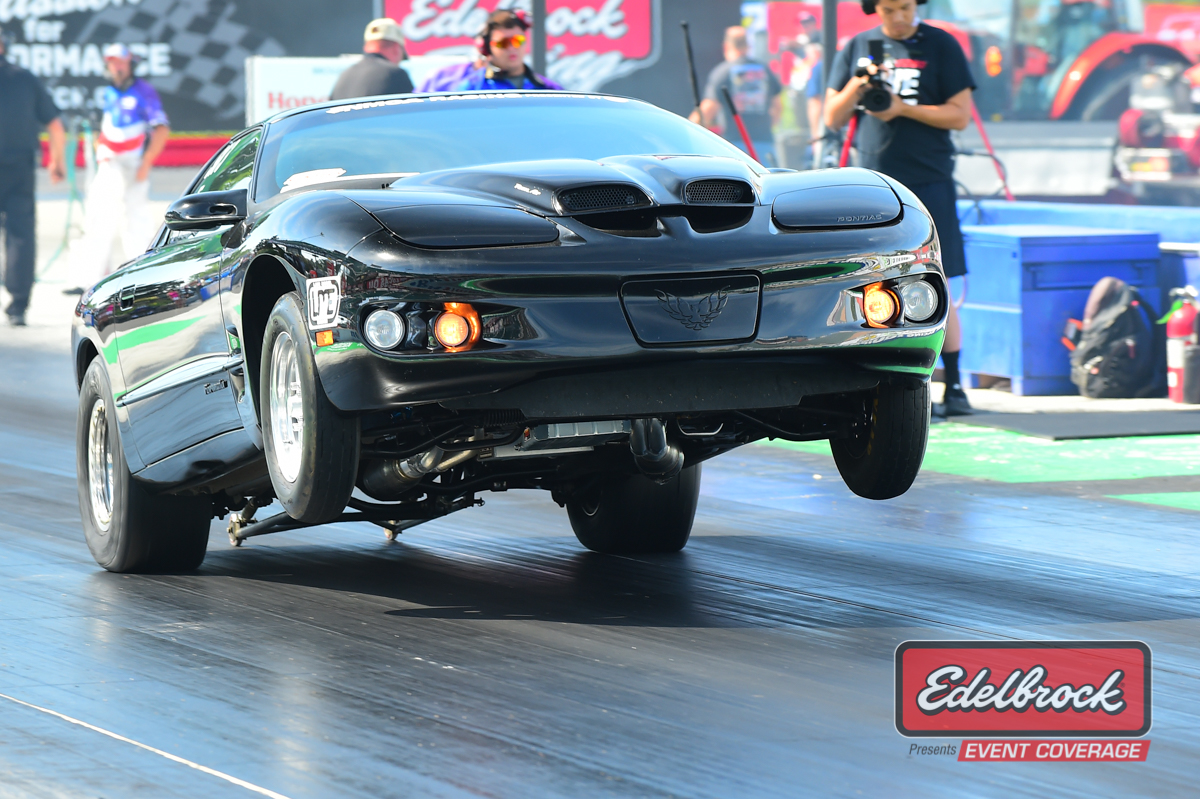 In the first round of Chevrolet Performance Challenge Series qualifying yesterday, Jessie wheeled to a 10.18 in Chevrolet Performance Stock presented by Scoggin-Dickey Parts Center, Keith Vaughn recorded a 13.02 on a 13.00 in ProForm Rumble and Bryan Williams was 9.77 on a 9.75 in LME Street King. 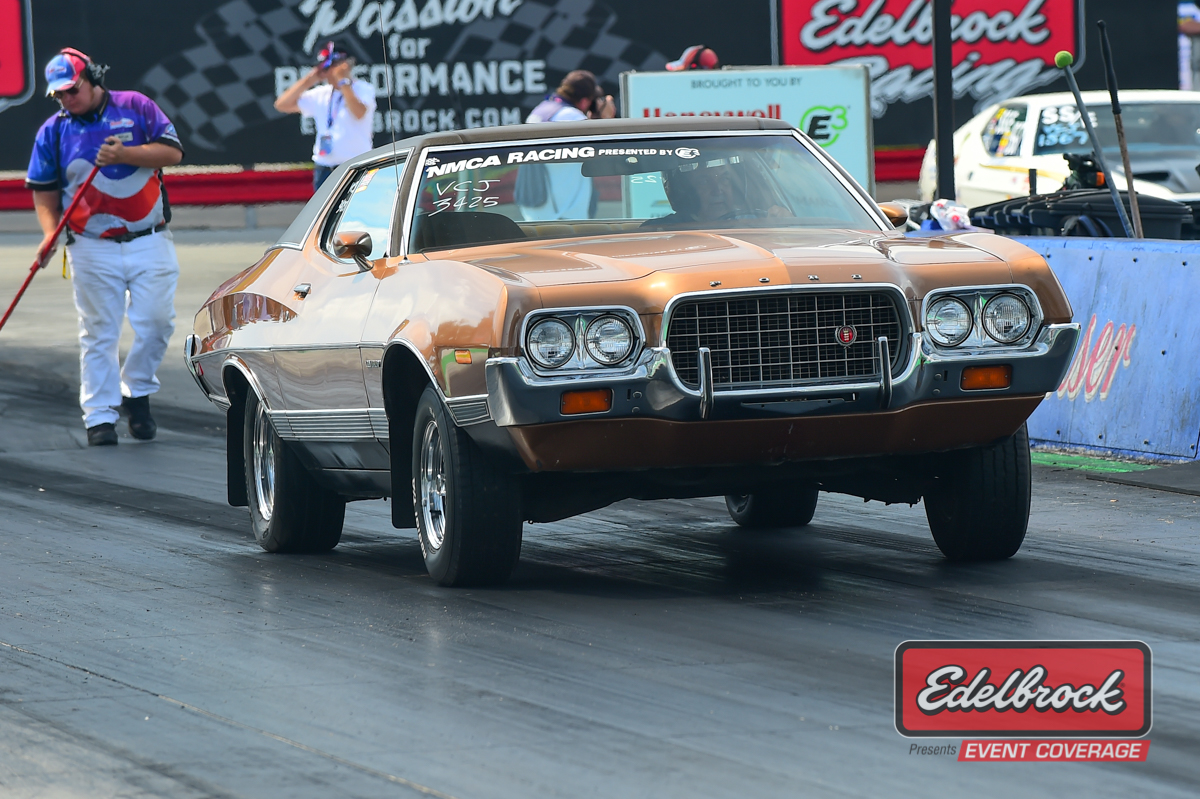 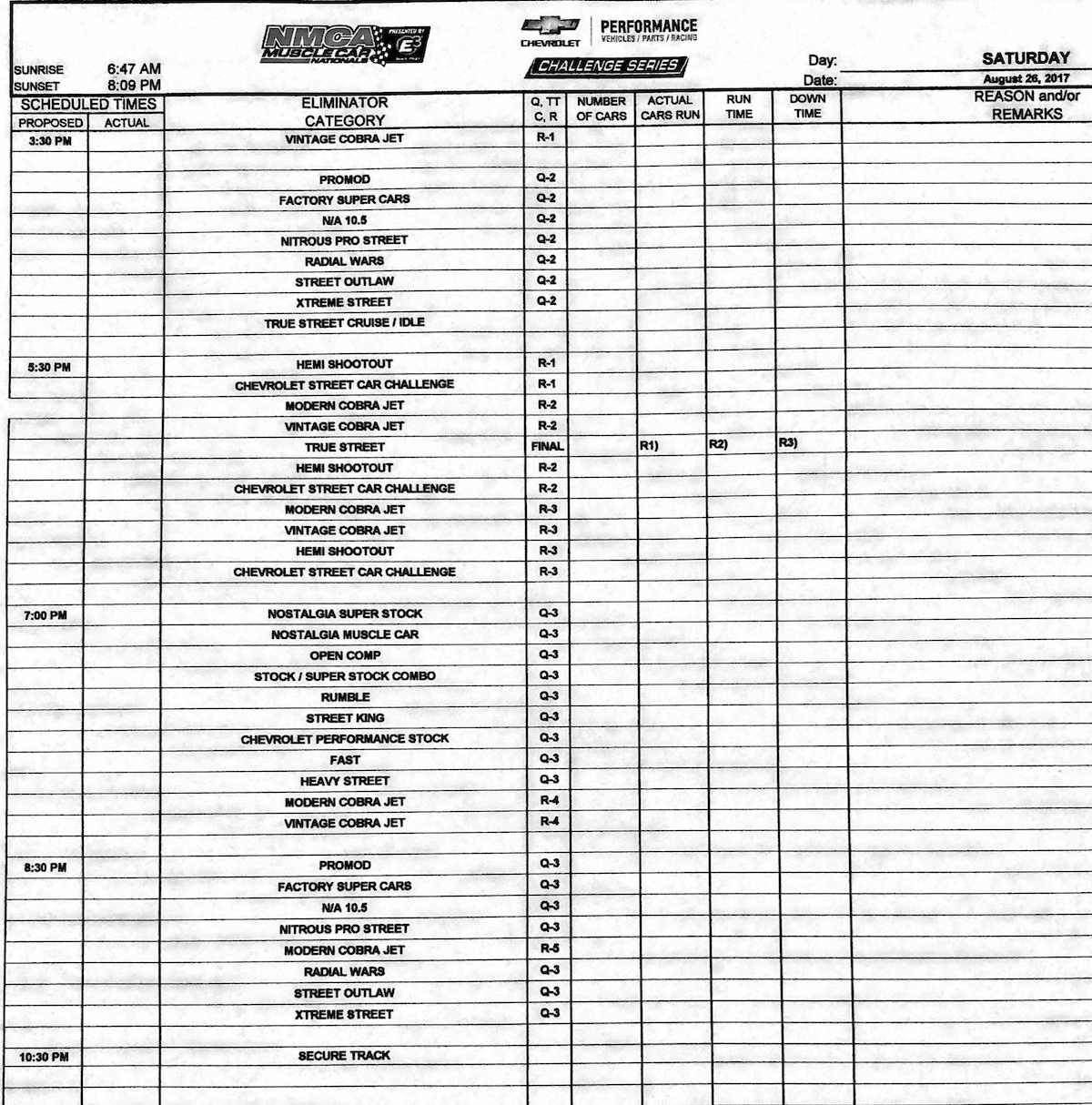 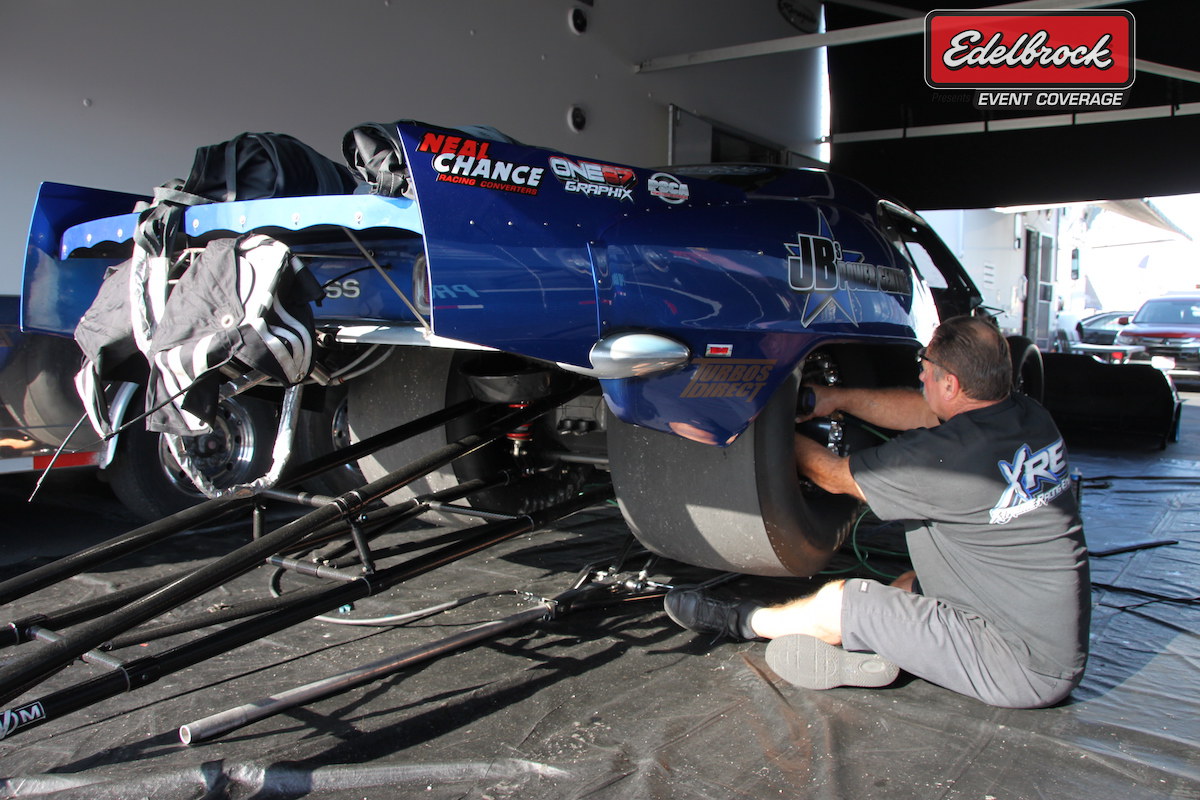 While Jim Bell and Carl Stevens Jr. have been taking turns piloting Bell's 1969 Camaro, Bell is in the driver's seat of his blue Bickel-built car this weekend. In the car featuring an Xtreme Racing Engines-built billet Hemi fronted by twin Garrett turbos, Bell was forced to lift to a 5.77 in yesterday's first round of qualifying, but he and his crew, consisting of Carl Stevens Jr., who drove to the win at the World Series of Pro Mod last weekend, and Carl Stevens, are looking to move up. 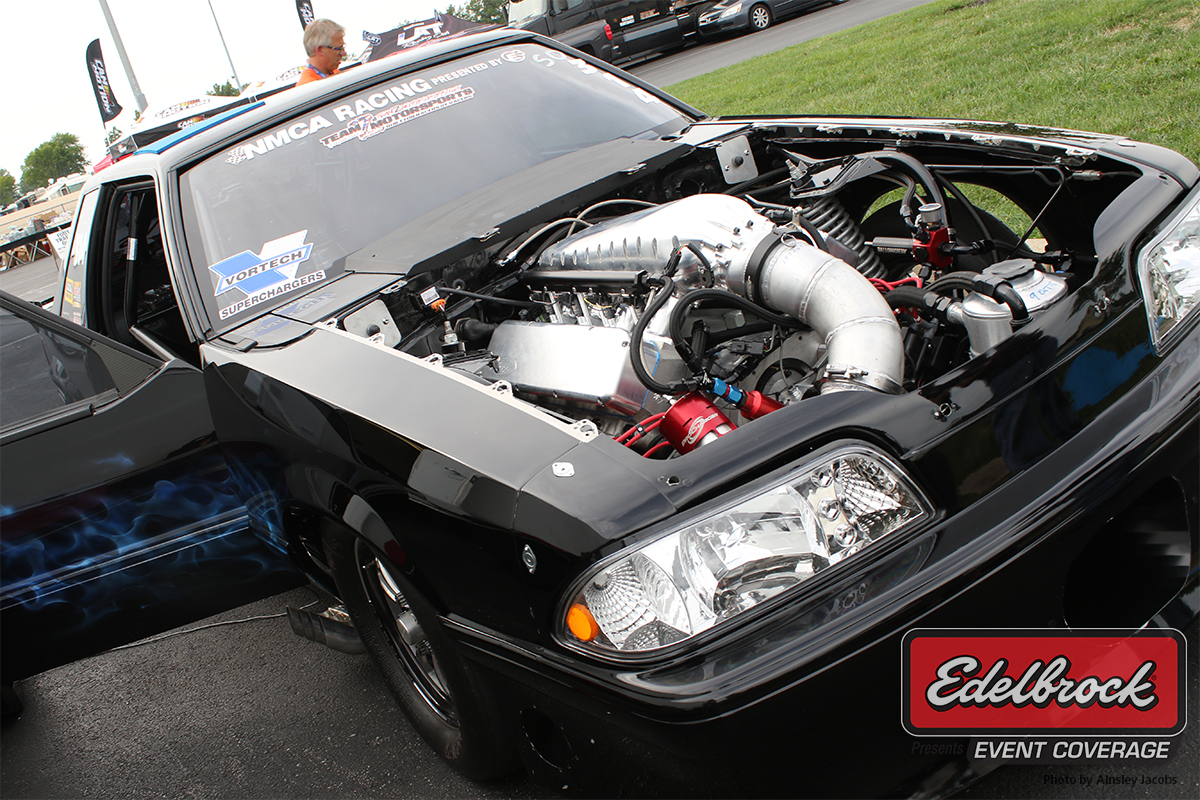 Back with the NMCA after a long time away, Brian Wolfe of Willis, Michigan is here shaking down the new combination in his Team Z-built, all steel-bodied '87 Fox body Mustang in NMCA Vortech Superchargers Street Outlaw. Sporting a massive ProCharger F1X-12 and Chris Alston's Chassisworks gear drive, the Pettis Performance 450 small block Ford engine took only its second trip ever down the track yesterday. Interestingly, the engine was actually Wolfe's Plan B which he purchased from fellow NMCA Eric Gustafson when his original didn't come together as quickly as he had hoped. Running off a Big Stuff 3 Engine Management System and backed by a two-speed M&M transmission, the car also utilizes a Visner Engine Development intake and throttle body. For those wondering who did the killer flame paint job, that was Wolfe's wife, Nancy, with help from their friend Chris Hodyka. 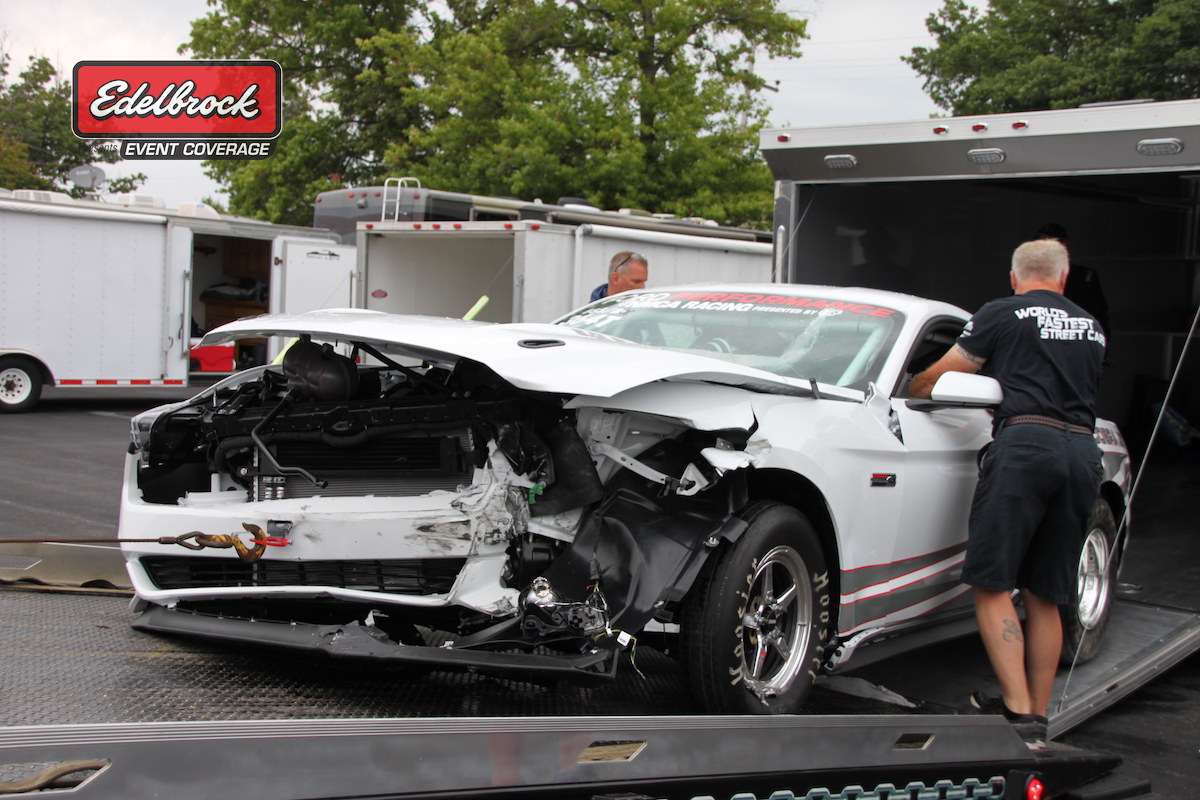 While racing in the Diversified Products Modern Cobra Jet category today, Ed Brown's beautiful 2016 Cobra Jet impacted the wall mid-track. Brown was out of the car and walking on his own as NMCA's Lonnie Grim, Michael Washington, Lonnie Peplau and Steve Baur helped to back it off the flatbed and into his trailer. According to Grim, it appears right now as though the inter-cooler lid wasn't secured, and allowed fluid to fall to the tires. We hope to see Brown back in action soon. 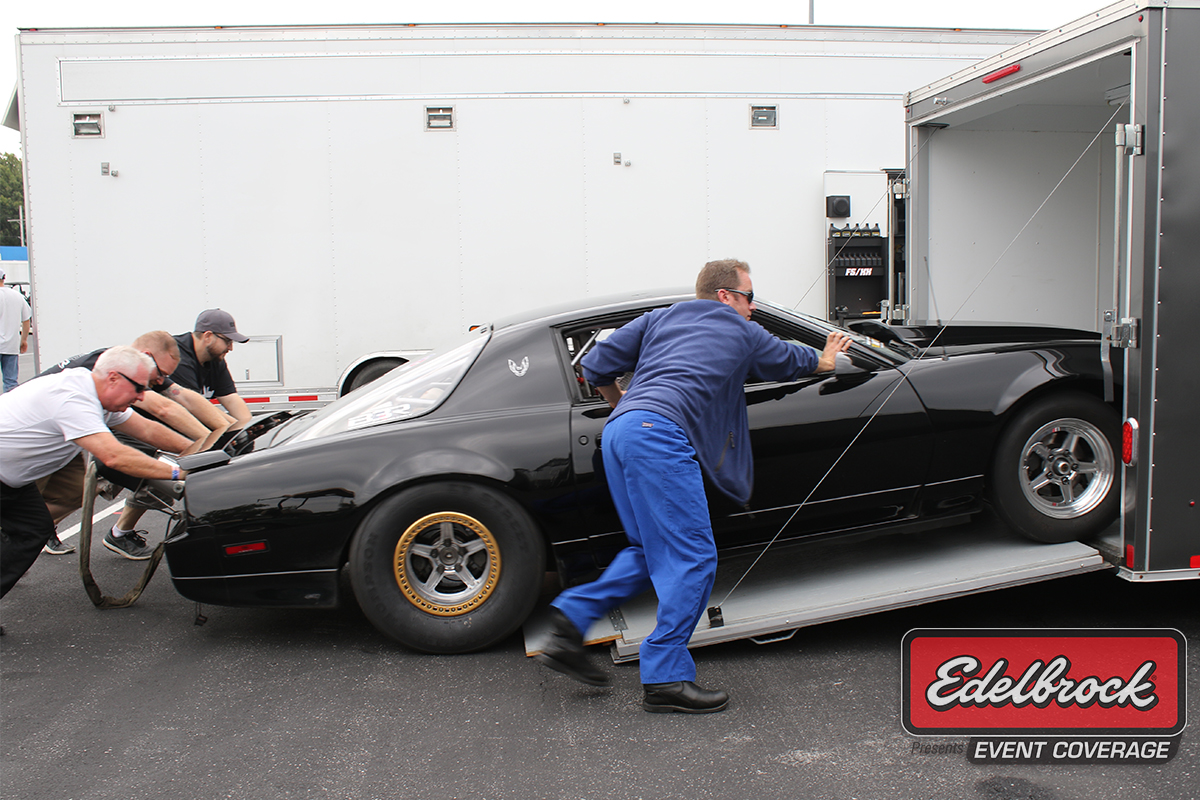 Charlie Frantz brought a knife to the NMCA Mickey Thompson Radial Wars gunfight with his street legal, 3400-pound 87 Pontiac Trans Am. He was hoping to have a great weekend with his wife, Lynn, and on-site tuners from Big 3 Racing, but fate had other plans as the twin Bullseye Power-turbocharged 427 ci small block Chevy engine dropped a valve before qualifying was in full swing. A matching Powerglide transmission and converter from PTC are on board, along with a Holley Dominator EFI system, and Frantz usually runs 4.70s when he races locally in outlaw drag radial trim. 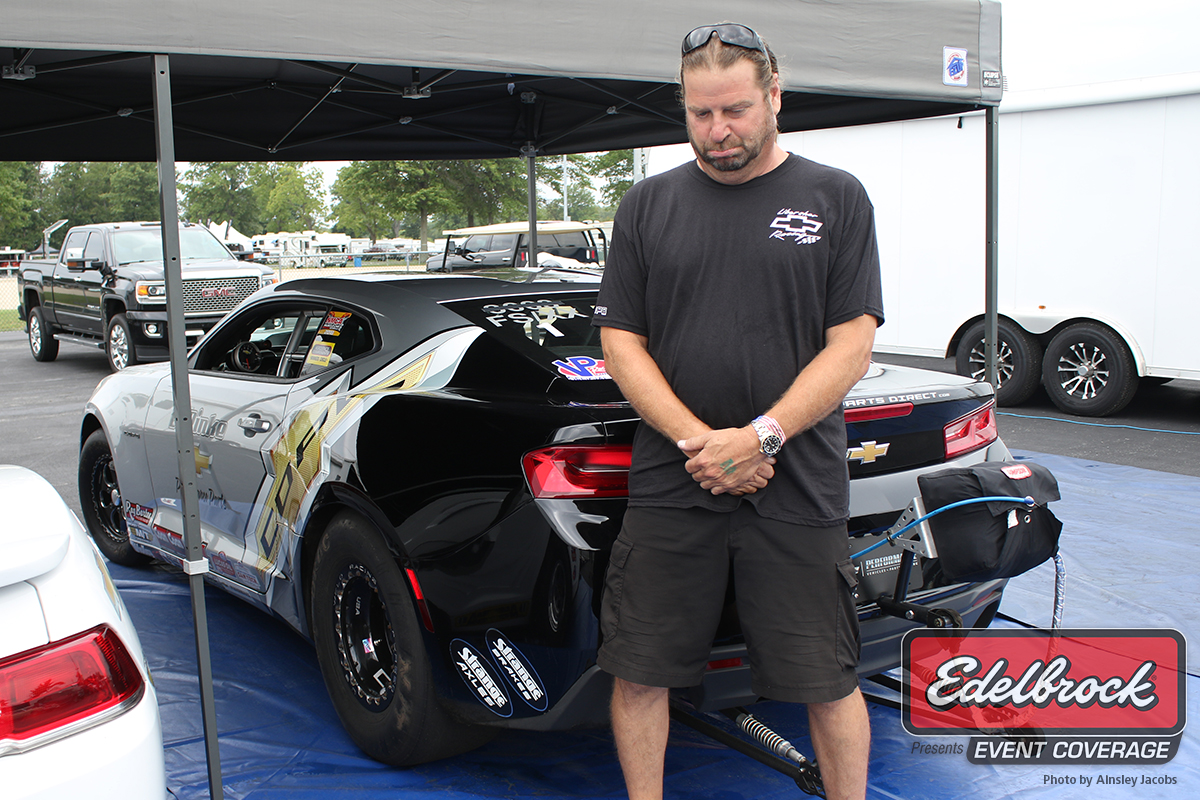 Sad trombone. Scott Libersher and Danny Condon have been trading COPOs this weekend, moving around transmissions and swapping superchargers in hopes of working to see if they can pick up a few numbers in the elapsed time department. When the first round of NMCA Holley EFI Factory Super Cars qualifying rolled around, though, the reining champ had a little 'driver error during the one-two upshift and Libersher was left with only an 8.305 at 167.09 mph pass even though he had run 8.16 and 8.17 in testing earlier. 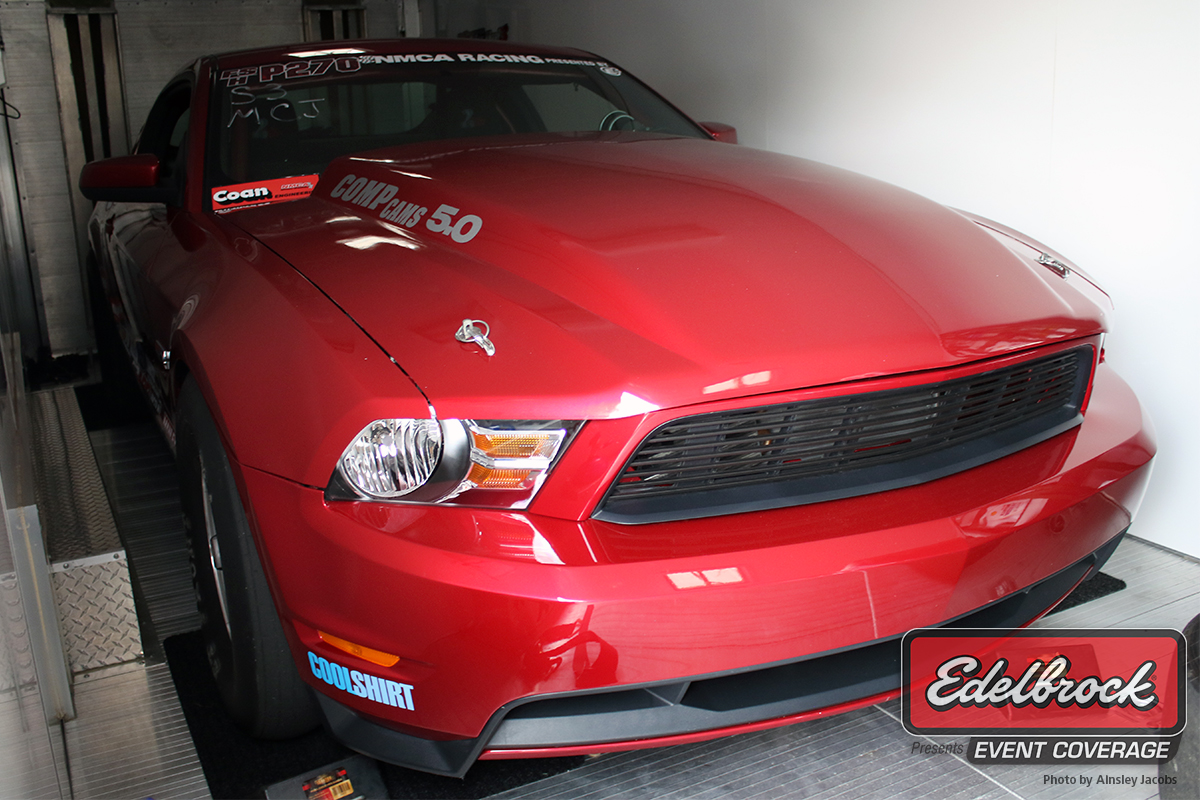 Ricky Pennington had to pack it up even before Diversified Modern Cobra Jet and Coan Engineering Stock/Super Stock Combo qualifying began, as the Alabama-based racer's 10-second 12 Mustang had an issue with only one side of its engine firing. His first test pass went well and the car was on a tear, but the problem cropped up in the shutdown area. He suspects the BigStuff3 ECU died, and with no backup and no spare, his plans for the pony are over and done before the race even began. Fortunately, he's still got old reliable his 64 Chevelle SS to have fun with this weekend in Magnaflow Open Comp. 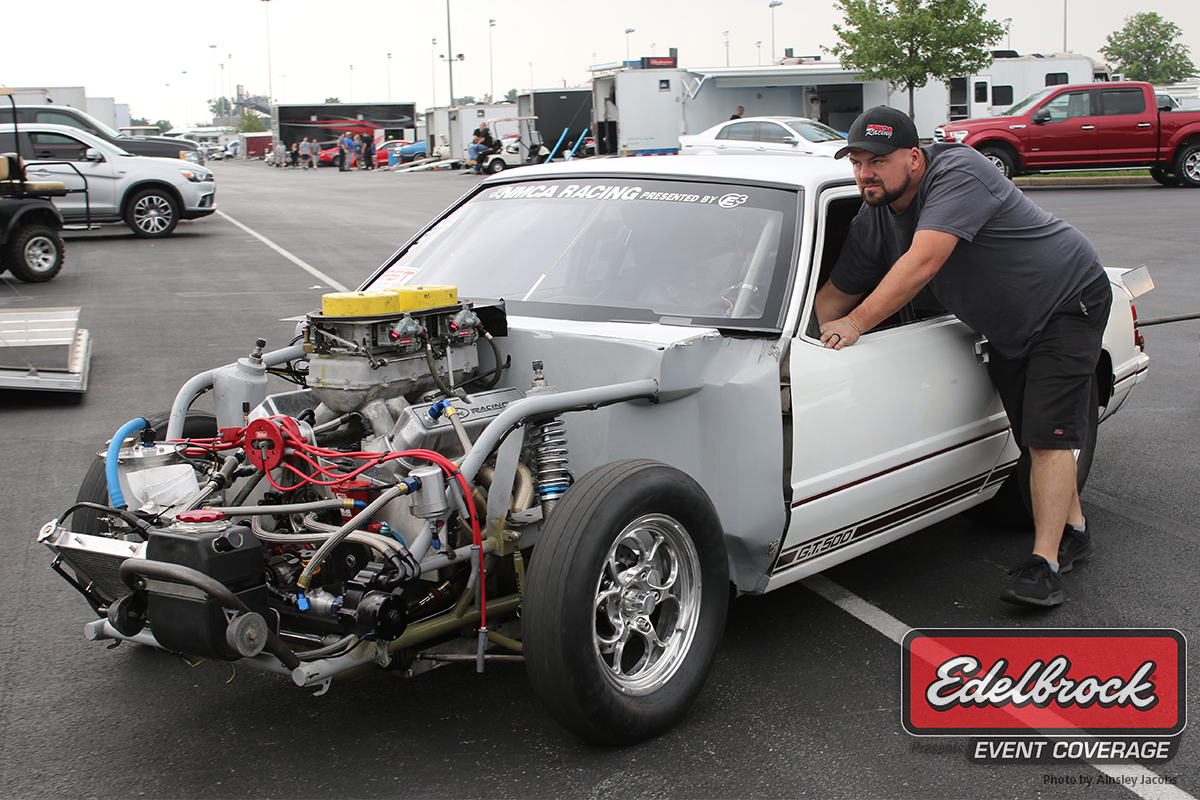 TJ Strange is loading up, not because he broke or he's out, but because he just ran a new personal best of 8.08 at 167 mph with a 1.15-second 60-foot in NMCA Fuel Systems Technology NA 10.5 and wants to keep his 84 Mustang nice and dry as a little rain moves in. 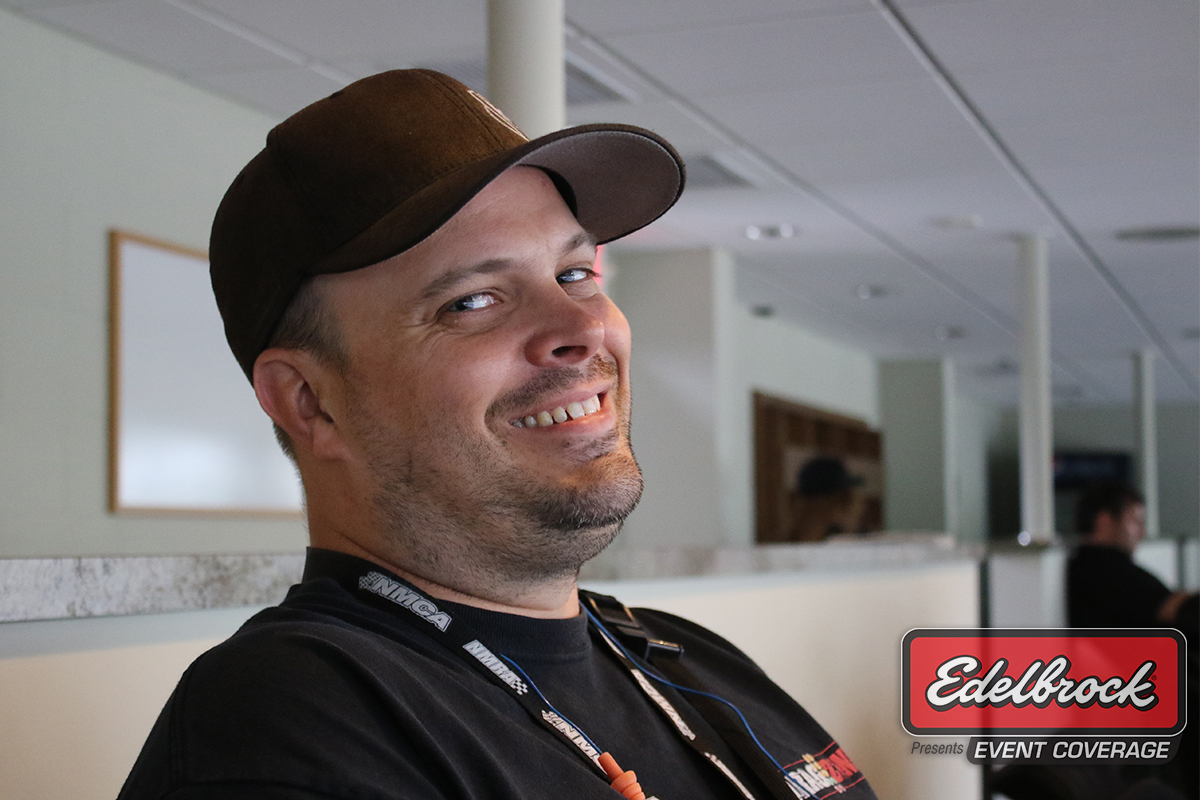 DragZine.com wordsmith and camera-button-pusher Brian Wagner is pulling a double shift this weekend as he's both working and racing. Running his 00 Pontiac Trans Am in the True Street-style Chevrolet Performance Street Car Shootout portion of this weekend's festivities, Wagner went for a ride earlier when Project Red Dragon ran 11.02 at 124 mph. The car dead hooked off the line, the Nitrous Outlet 150 shot wet kit did its job, Wagner slapped into second gear and the car threw him back into the seat. Using a stock LS1 engine with stock heads, Pace Setter headers, Brian Tooley Racing stage-4 cam, and a built 4L60-E transmission with ATI torque converter, power is then transferred out the rear end through a Moser 9 and the whole thing is meant to be representative of everyday obtainable performance. 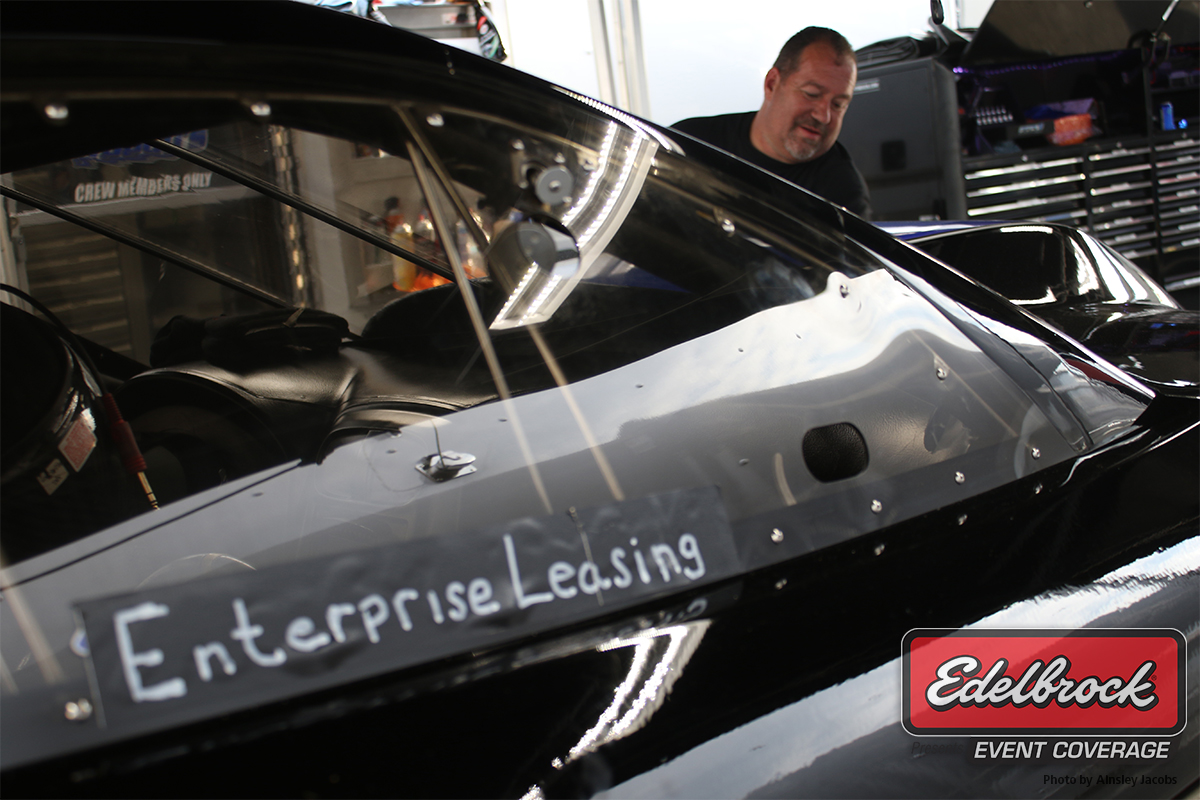 Need a racecar First there was WoodyMart and now there's Enterprise Leasing in Mark Woodruff's pit. He'll even throw in a free wax and buff. 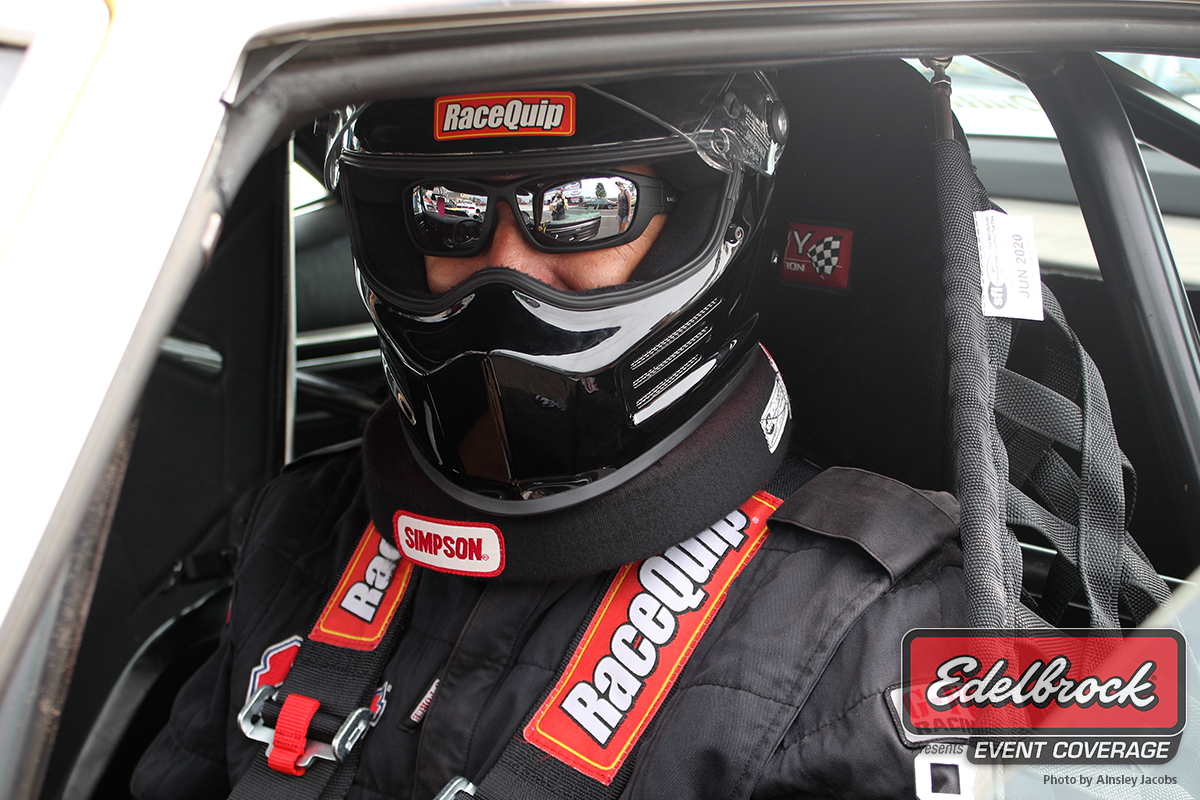 Kurt Anderson is smiling under his helmet (we promise) as he awaits the second qualifier of NMCA Magnafuel Open Comp. The man from Eau Claire, Wisconsin, had a good run in his popular 69 in the first hit, but his 0.088-second reaction time left a little to be desired in the initial qualifying standings. 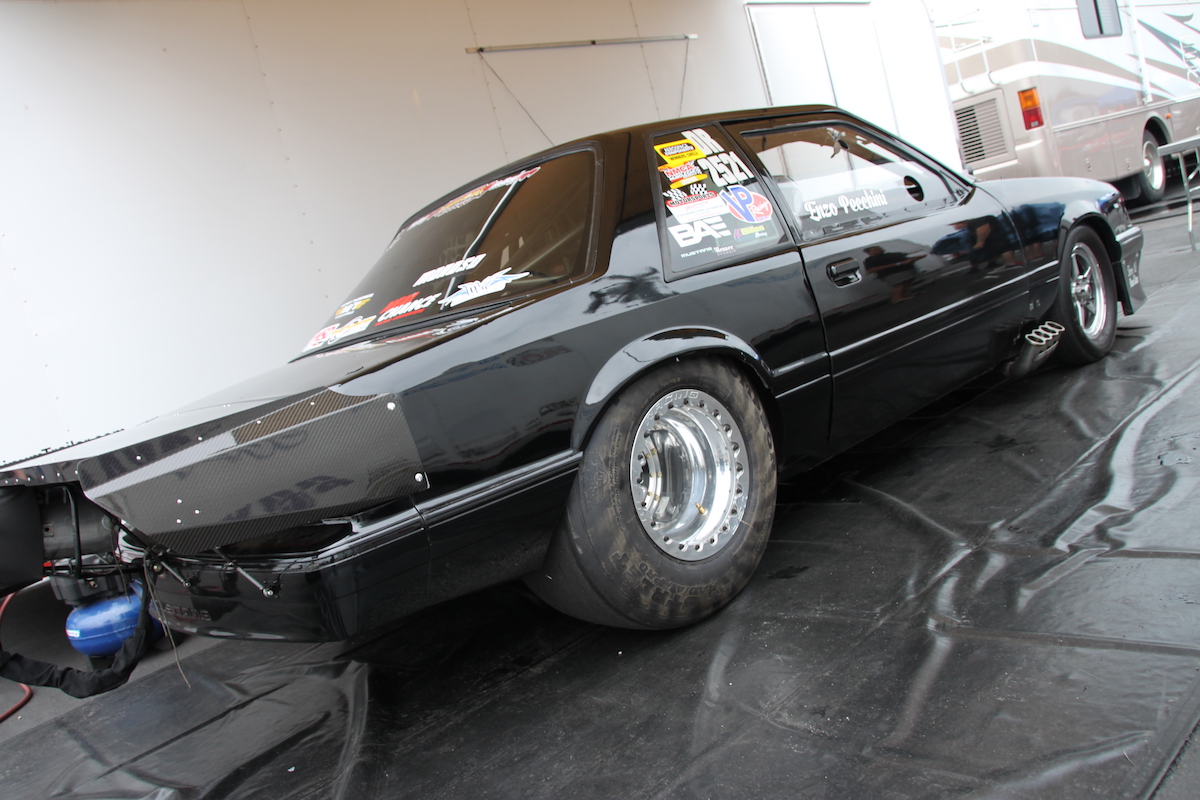 It's been a few years since Enzo Pecchini has competed in Mickey Thompson Radial Wars, but he's here this weekend, and he's leading the pack in the category with a 4.08 and 183 mph after one qualifying session. His Mustang is motivated by a 521 cubic-inch Brad Anderson Hemi built by Al Billes and fronted by a ProCharger, and in it, Pecchini, who uses Big Stuff 3 to tune, has run as quick as 3.90. Watch for him to turn up the wick later this weekend. 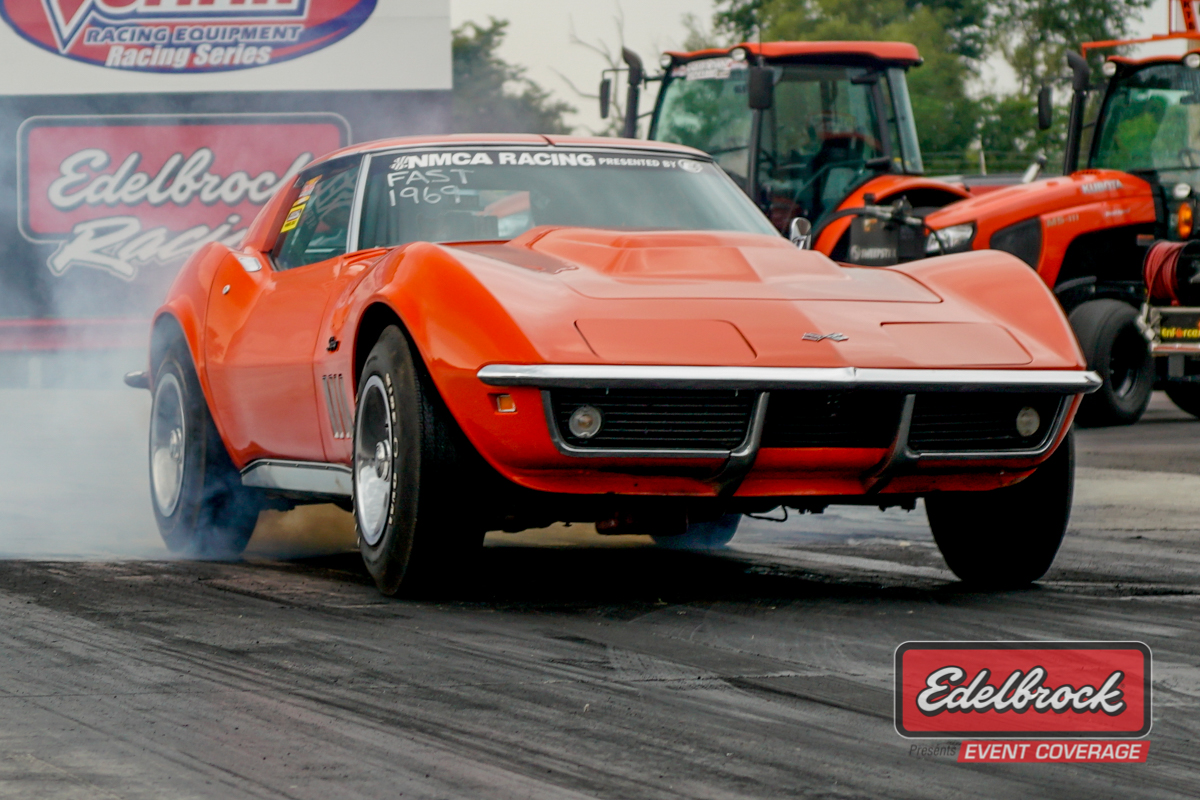 Running in the Factory Appearing Stock Tire category, Terry Pennington clicked off a 9-second pass in his 69 L88 Corvette during yesterday's test session. He then fell behind front-runner Dave Dudek and his Roadrunner with a 10.18 to claim the second spot on the qualifying ladder after round one. Round two would see him unleash yet another 9-second pass, this one a 9.96 at 140 mph that put him ahead of Dudek. 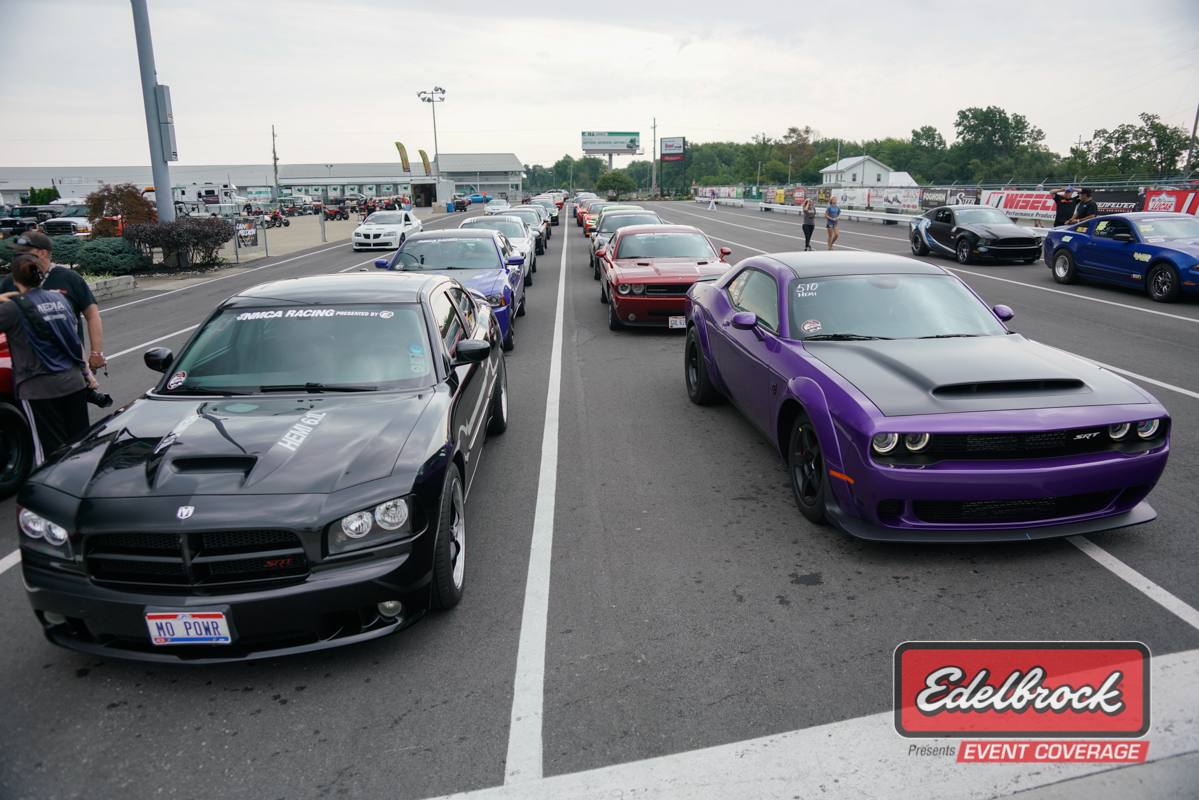 The NMCA hit an all-time-high car count with the Dodge // Mopar Hemi Shootout this weekend as dozens of Gen III-Hemi-powered machines have been attacking the asphalt here at Summit Motorsports Park. Of particular interest is a Jeep Trackhawk that clicked off a 10.30 run. 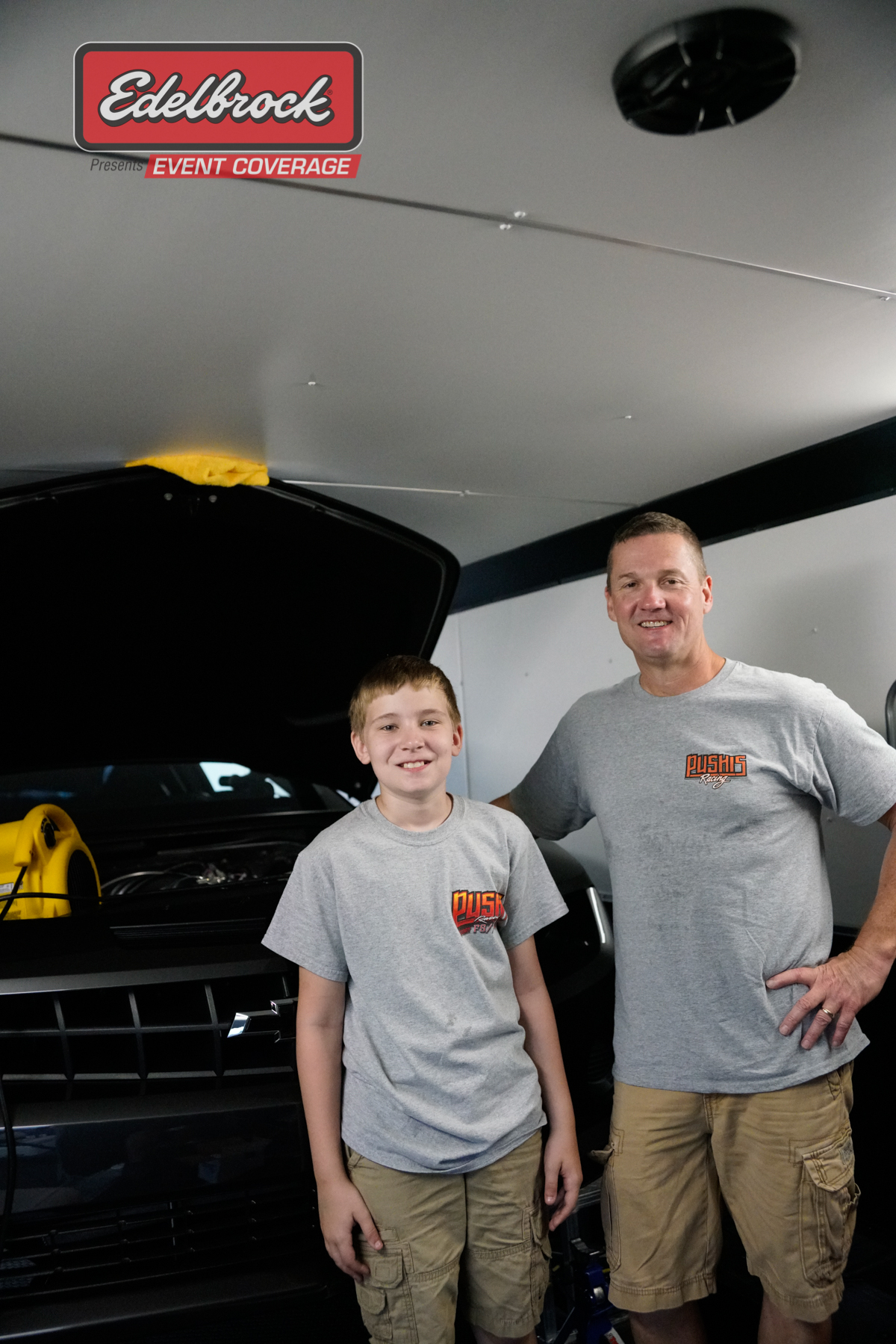 Scott Brown has found favorable winds in Chevrolet Performance Stock. In his debut race in Bowling Green, Kentucky, he bowed out first round but left knowing the CRC Camaro had more in it, as his 10.90 in the first round was nowhere near the 10.2 he clocked during testing. In Joliet, Brown was on point with a string of 10.2-second runs that took him to the final round. There he had Jesse Wilson on the tree and had he clocked another 10.2 pass, he would have had a chance at taking the class victory, but a 10.5 was the result for the runner up. He'll be looking to improve upon that performance this weekend. 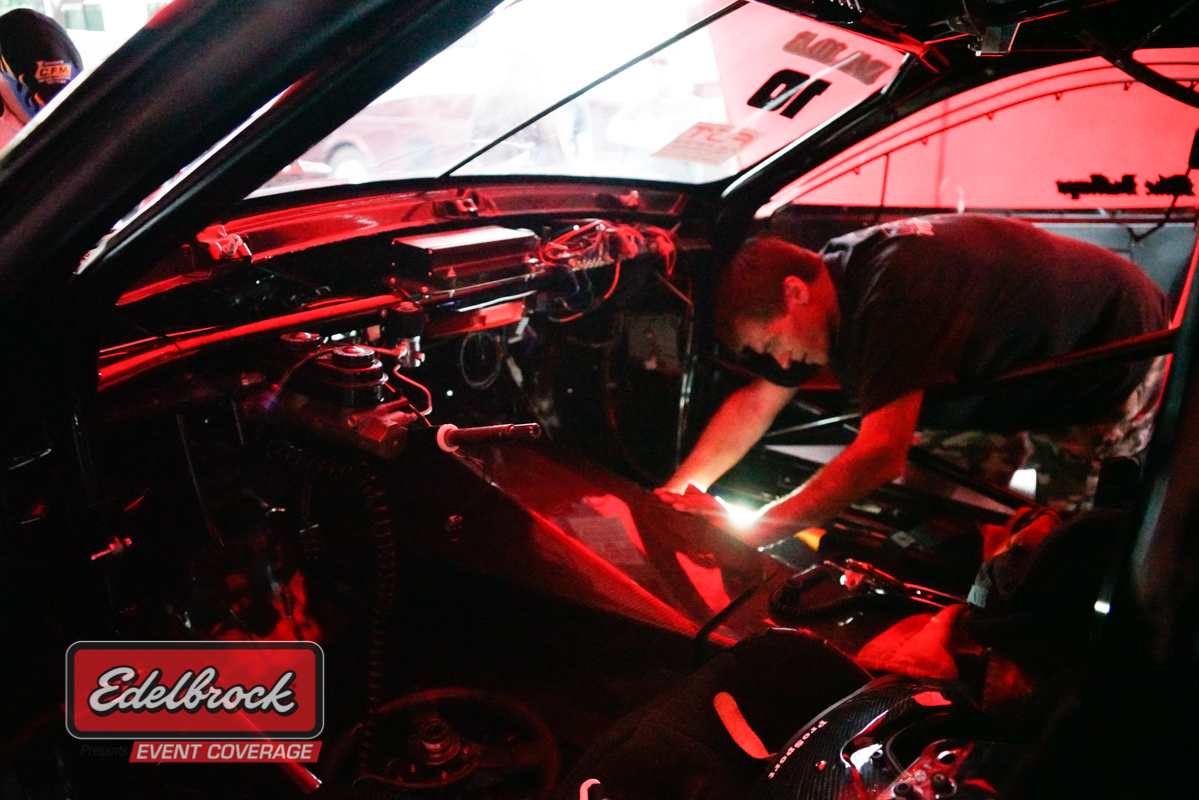 Fuel Systems Technology NA 10.5 racer Mike DeMayo was finishing up a transmission swap in his SN-95 Mustang earlier today, as he was hoping that a gear change would make up for less than favorable air quality. 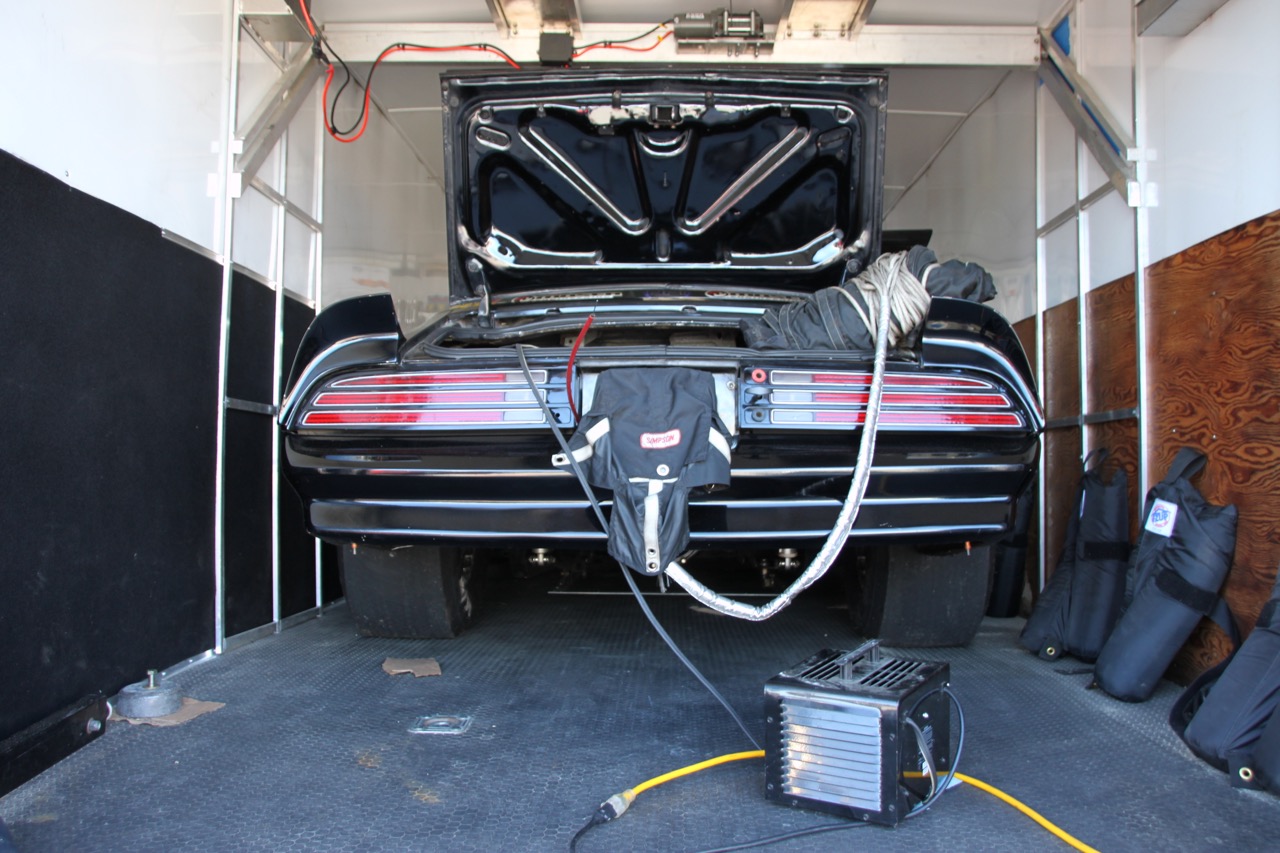 Shawn Ayers, who drives Fletcher Cox's Gold Dust Mustang in Vortech Superchargers Street Outlaw, discovered that he had left the driver's door of the car back home in Mississippi when he went to unload the car here on Thursday. He subsequently made a six hour-long drive to meet someone half-way to pick up the door and made it back to the track in time to lay down a 4.33 to qualify in the second spot. Now that today's rain delay is over, Ayers, who's leading points in the class, is preparing for the second round of qualifying. Longtime heads-up racer Keith Jackson of Michigan has made his VP Racing Fuels Xtreme Pro Mod debut this weekend in his Jerry Bickel Race Cars-built 1969 Camaro-bodied car patriotically-painted and packing an 872 cubic-inch Buck Racing-built bullet and a SpeedTech nitrous system. It hasn't been trouble-free, however, as he burned up a piston and broke a rocker on two different passes, and has had his engine apart twice, but he managed a 4.39 in yesterday's first round of qualifying and then picked up to a 4.02 in today's second round of qualifying. All eyes will be on him as he tries to pick up even further in tonight's third round of qualifying. 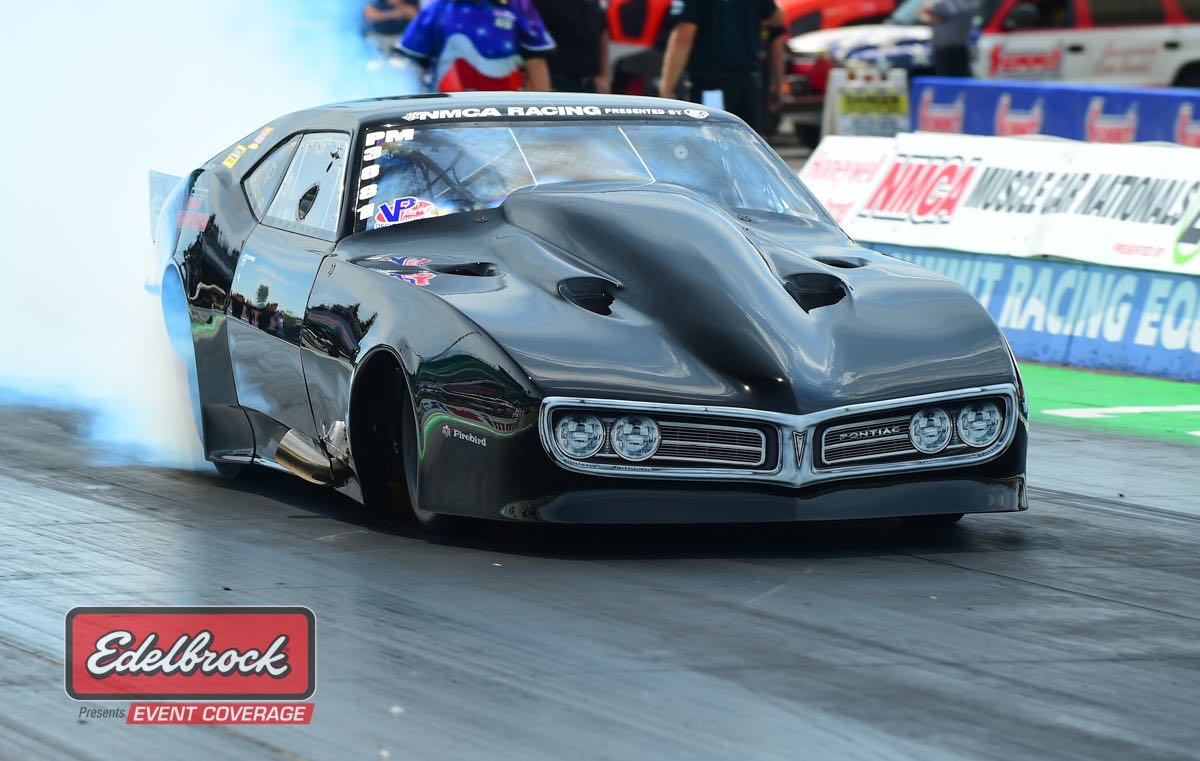 Former NMCA Super Street 10.5 driver Mike Yedgarian, who was severely burned in an on-track nitrous incident 15 years ago, made the move to the Pro Mod ranks in 2013, and is racing in VP Racing Fuels Xtreme Pro Mod this weekend. His 1968 Firebird-bodied car built by Vanishing Point Race Cars carries him to the finish line with a 520 cubic-inch Brad Anderson Hemi fronted by twin Precision turbos, and a Liberty 3-speed manually-shifted clutch helps Yedgarian put the power down. After posting a 4.20 at 177 mph in yesterday's first round of qualifying, he picked up to a 4.01 at 202 mph in today's second round of qualifying, and is hoping to move up a couple spots to make the 16-car, 3-second field in tonight's final round of qualifying. After this event, Yedgarian will prepare for the Summit Racing Equipment Shakedown at the Summit presented by Mickey Thompson Performance Tires & Wheels, Sept. 13-17, also at Summit Motorsports Park. "This track and the car-count this weekend are amazing," said Yedgarian. Keep up with all of the qualifying results as they happen today right <<<<HERE>>> UPDATE 9:15PM--Light rain has moved into the area, it isn't showing up on the radar but we have stopped racing for the night because of the light rain. With 85% humidity and dew point close to the temperature, there is no chance to get the surface dried for competition. Sunday morning will begin with MagnaFuel Open Comp at approximately 8:45AM, followed by the regular line-up. The Modern and Vintage Cobra Jet categories will run before the first round of VP Racing Fuels Xtreme Pro Mod.