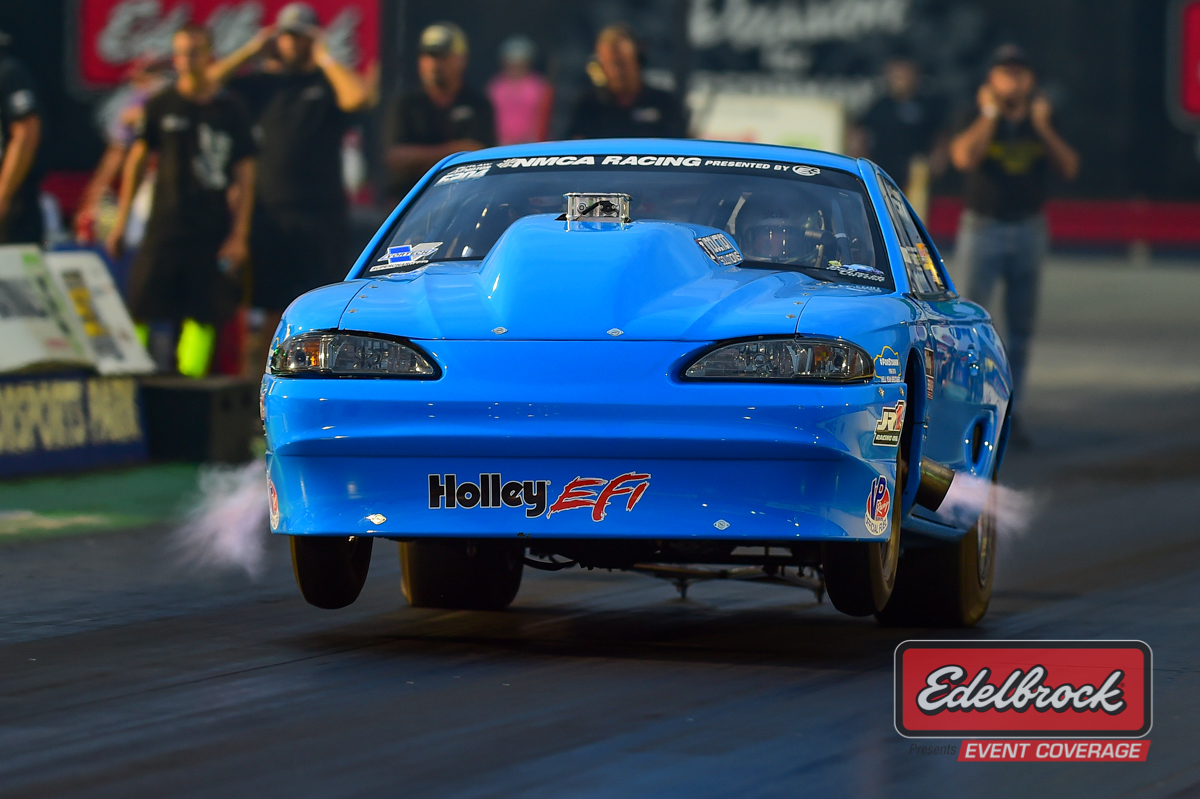 Written by: Ainsley Jacobs The second to last stop on the 2018 NMCA tour, the 17th Annual Honeywell Garrett NMCA All-American Nationals featuring the Chevrolet Performance Challenge Series, could make or break it for some racers chasing the championship. With nerves on edge and tunes set to kill, the world's fastest street cars descended on Summit Motorsports Park in Norwalk, Ohio, over the weekend of August 24-26, 2018 for another epic drag racing event. Additionally, the 50th Anniversary Ford Performance Cobra Jet Reunion presented by TascaParts.com was in full swing with a mind-boggling array of historic, vintage, and priceless Cobra Jet cars on display for fans to enjoy. Although there was a bit of rain on Saturday and overnight into Sunday, the soggy sod didn't dampen the spirits of those in attendance as well over 500 racecars were on the property in addition to the killer car show. The biggest, baddest machines on the property enjoyed a thirty-four car field in VP Racing Fuels Xtreme Pro Mod. Demotte, Indiana, resident and points leader Jason Hamstra claimed the top honors in qualifying when he coaxed a cool 3.724 at 204.23 mph hit from his supercharged 69 Camaro. Hamstra was still in the running by the time the final round rolled around, and was scheduled to go up against the number two qualifier, Don Walsh Jr, but Walsh hurt the drivetrain in his Corvette in the semi-finals bad enough that he wasn't able to make the call to the start the next time out. Hamstra then opted instead to claim his victory by simply breaking the beams and saving any wear and tear on parts, ending the weekend on a high note.

Making moves in Mickey Thompson Radial Wars, it was Kentuckian Marty McFly n Stinnett and his twin turbo, small-block powered orange Fox body sitting pretty in the number one spot after qualifying had been finalized thanks to a 3.932 at 193.43 mph pass. Stinnett went out in the semi-finals, but James Lawrence and Enzo Pecchini both advanced to the last match-up of the weekend. There, Lawrence had the starting line advantage with his DragZine.com-backed, ProCharged Corvette and never trailed to take the win with a 3.986 at 188.31 mph blast while Pecchini stopped the clocks in 4.128 at 180.48 mph.

In Vortech Superchargers Street Outlaw, Daniel Pharris of Sikeston, Missouri, was the number one qualifier as he went 4.317 at 172.36 mph in his turbocharged 95 Mustang. A bye put him through to the finals where he met with the nitrous-assisted 738 ci powerhouse belonging to Nick Bacalis of Harrison, Ohio. When the lights dropped, Bacalis absolutely drilled Pharris on the tree and refused to give up the lead. Bacalis and his blue 96 Mustang were on a mission, and when they crossed the stripe ahead of Pharris, Bacalis took the first Street Outlaw nitrous win since 2014 and got his well-deserved first trip to the Aerospace Components Winner's Circle of his career.

Mark Pawuk of Akron, Ohio, powered to the lead in Holley EFI Factory Super Car when he went 8.057 at 171.58 mph during qualifying in his 15 Dodge Challenger. Pawuk powered on and reached the finals where he was paired with Leonard Libersher of Wilmington, Florida, for a Dodge vs Chevy duel. Unfortunately for Libersher, a 0.001-second foul start turned on the red light for his 15 COPO Camaro and let Pawuk cruise to victory on his 8.152 at 169.23 mph jaunt through the traps and to the Aerospace Components Winner's Circle. No one was laughing in ARP Nitrous Pro Street when Terry, Mississippi-based Tricia Musi set the pace in the Popeye 00 Pontiac Firebird on a 4.435 at 161.87 mph trip. It was an easy win for Jordan Ensslin in the finals, though, as the man from Lakeland, Florida, ran his 02 Pontiac Trans Am down the 1320 unopposed due to Jennifer Brooke Rice's tough luck when a mechanical issue took the young lady from Springfield, Tennessee, out of the running. Over in Fuel Systems Technology NA 10.5, David Theisen was the quickest all-motor qualifier. The Highland, Michigan, resident covered the quarter mile in 7.882 seconds at 176.58 mph in his 69 Firebird. Theisen was on point all through eliminations and defeated competitor after competitor, including Leonard Long in the finals when he ran 7.933 at 174.91 mph over Long's 7.985 at 172.76 mph response. As usual, Jesse Coulter lead the way during Edelbrock Xtreme Street qualifying as the 2017 season champion and his turbocharged 91 Camaro produced a 4.716 at 148.92 mph time slip. Coulter continued to kick butt through eliminations and earned his spot in the finals where he ran against Tim Knieriem of Shepardsville, Kentucky, who had qualified second with his 95 Mustang. The green light lit and Knieriem was the first off the line, but Coulter was able to drive around him to take the win with a 4.749 at 149.46 mph payday. The ever-growing Coan Engineering Stock/Super Stock Combo category featured muscle from all three makes, but only one would be deemed King of the Hill. Wisconsin-based Jeffrey Frees took on New Yorker Charlie Walc in the final round, and Frees chopped down the tree to his advantage. His holeshot, combined with his 10.015 at 124.64 mph pass on his 9.97 dial in helped him find success against Walc. Hosting an abundance of beautiful classic muscle cars, ATI Performance Products Nostalgia Super Stock qualifying was tight but ultimately Ostrander, Ohio-based Mike DeChicco came out on top thanks to a near-perfect 9.501-second pass from his 65 Dodge Coronet on his 9.50 index. The number fourteen qualifier, Kevin Gass of Ledbetter, Kentucky, had enough in the tank to stay in it until the finals. It was a double breakout situation for Gass and opponent Doug Poskevich, but Gass's 66 Chevelle turned on the win light in its lane. Running thisclose to his 12.000 index with a 12.003-second hit during Detroit True Trac Nostalgia Muscle Car qualifying, Tim Boggs of Fayetteville, Ohio, held the lead with his 67 Chevy II going into eliminations. However, the final was occupied by last season's champion, Andy Warren, and Chad Brewer. Warren, who calls Elizabethtown, Kentucky, his home and runs a 71 Caprice, ran closer to his index than Brewer of Canton, Georgia, in his 73 Nova and secured the win as a result. Warren is the most successful racer in NMCA history with the most trips to the Aerospace Components Winner's Circle in the organization's history. Sixty-one car and driver combinations came to do battle in MagnaFuel Open Comp, but it was Larry Geddes of Barnesville, Ohio, who led the way going into eliminations after he cut down the tree with a perfect 0.000-second reaction time in his 90 Mustang. The resulting six eliminations rounds were tougher than ever, but Kurt Anderson of Eau Claire, Wisconsin and Greg Bagnell of Spring Hill, Florida, were the lone survivors. Bagnell broke out with his 85 Mustang but Anderson and his iconic 69 Camaro ran 9.784 at 135.16 mph on his 9.78 dial in to secure yet another win in his already impressive career. Late model muscle cars have a new class to run in, as Mickey Thompson Heavy Street debuted this weekend. The heads-up eliminator category does not use a standard qualifying order as pairings are handled via a chip draw system. Three hits are given prior to eliminations, though, and Terry Reeves was the quickest of the bunch as the man from Bethel, Ohio, clicked off a cool 9.439 at 155.24 mph hit in his 18 Mustang. Making it through the rounds to the finals, it was Reeves against Simon Haddad of Shelby Township, Michigan, in his 16 Challenger. Reeves had the hole shot, but Haddad was able to drive around him and take the win with a 10.400 at 136.06 mph pass against Reeves's 11.899 at 124.90 mph effort. The much-loved Baskin Truck Sales F.A.S.T. group's (Factory Appearing Stock Tire) class is a great example of what classic, period-correct muscle cars can do. Top qualifying honors were awarded to Terry Pennington of Mishawaka, Indiana, as he ran 9.966 at 140.14 mph in his 427 ci 69 Corvette, then in the finals, Pennington got the win over Bill Atwood while Julie Pennington also recorded a win over Eric Simpson in the corresponding Factory Stock class. A special addition for the Cobra Jet celebrations this weekend, Diversified Products Marketing Vintage Cobra Jet pitted classic CJ-powered vehicles against one another. Ultimately, Stephen Klacik from Aliquippa, Pennsylvania, showed em how it was done in qualifying with a quick 0.005-second reaction time to take the lead in his 72 Gran Torino. Five rounds of classic CJ action saw Steven Hall of Sweeny, Texas, take on Jacksboro, Texas, native Rod Hetzel. A -0.009-second foul start for Hetzel meant game over, while Hall stopped the traps in 9.768 seconds at 126.23 mph to make his win official.

Meanwhile, for the 08 and newer group, the Diversified Products Marketing Modern Cobra Jet class was the perfect playground to let their pony power shine. Hailing from Bayshore, New York, Gary Richard cut a perfect 0.000-second light in qualifying and earned the right to be at the top of the list. In the finals, Mike Pustelny of Almont, Michigan, and Rod Hetzel of Jacksboro, Texas, were the last two men standing and had qualified third and fourth. Hetzel once again red light-itis struck, and Pustelny went on to earn the win in his 14 Cobra Jet on an impressive tear of 9.831 at 136.25 mph. After the winners from both the Vintage and Modern Cobra Jet classes were determined, they faced off head-to-head in a winner take all battle of old versus new. Hall in his 68 and Pustelny in his 14 both left the line hard, but Pustelny went 9.863 at 135.88 mph on his 9.81 dial in over Hall's 9.754 at 136.46 mph trip on a 9.74 dial. The street car haven class of Gear Vendors True Street was won by Randy Thomas of Paducah, Kentucky, as Thomas and his 10 Mustang averaged an 8.777-second elapsed time across their three runs. Greg Woodlard was deemed the runner up on his 9.346-second average, while Codey Woodby won the 9-second group with a 9.406-second average and Jeff Yepper won the 10-second group with his 10.059-second average. Topping the 11-second group was Joe Glockner, Dakota Poston won the 12-second average, Mark Storts won the 13-second bunch, and Rob Tackett rounded things out as the winner of the 14-second contenders. Racing in the Chevrolet Performance Street Car Challenge, Pittsburgh, Pennsylvania resident Stephen Chechak brought his 80 Firebird out for some fun and their resulting 9.411-second average meant they were the overall winners in the group. George Messer was the overall runner up after averaging 10.234-seconds, Kevin Rowand was the 11-second winner, Bob Sanders was the 12-second winner, Bill Schoenberger was the winner for the 13-second section, and Kurt Hindel found success in the 14-second group. Additionally, in the Dodge / Mopar Hemi Shootout, Brian Fielder and his 08 Challenger saw no challenges as they averaged 10.032-seconds to take the overall win. In the runner up spot was Jim Jarrett with his 18 Challenger and a 10.043-second average, John Keyes was a winner for the 10-second pack, Eric Cunningham and Brian Borawski won the 11- and 12-second groups, respectively, Rich Sprintzl won the 13-second honors, Casey Fitzgerald won for the 14-second runners, and Grady Alley won in the 15-second pack. Bracket 3 brought together a variety of competitors from several classes including True Street, Vintage Cobra Jet, Modern Cobra Jet, HEMI Shootout, and more, but it was VCJ contender Don Fotti who took the win in the finals. Coming all the way from Winnipeg, Manitoba, Canada, Fotti went 11.595 at 97.77 mph on his 11.50 dial in with his 68 Cobra Jet against Rob Tackett who ran a low 14-second pass. Prepare for the final fight as the NMCA Drag Racing season, presented by E3 Spark Plugs wraps up with its exciting conclusion on September 21-23, 208, at Lucas Oil Raceway in Indiana, Indianapolis with the 17th Annual NMCA World Street Finals!
E3 Spark Plugs
,
Honeywell Garrett
,
nmca
,
Summit Motorsport Park