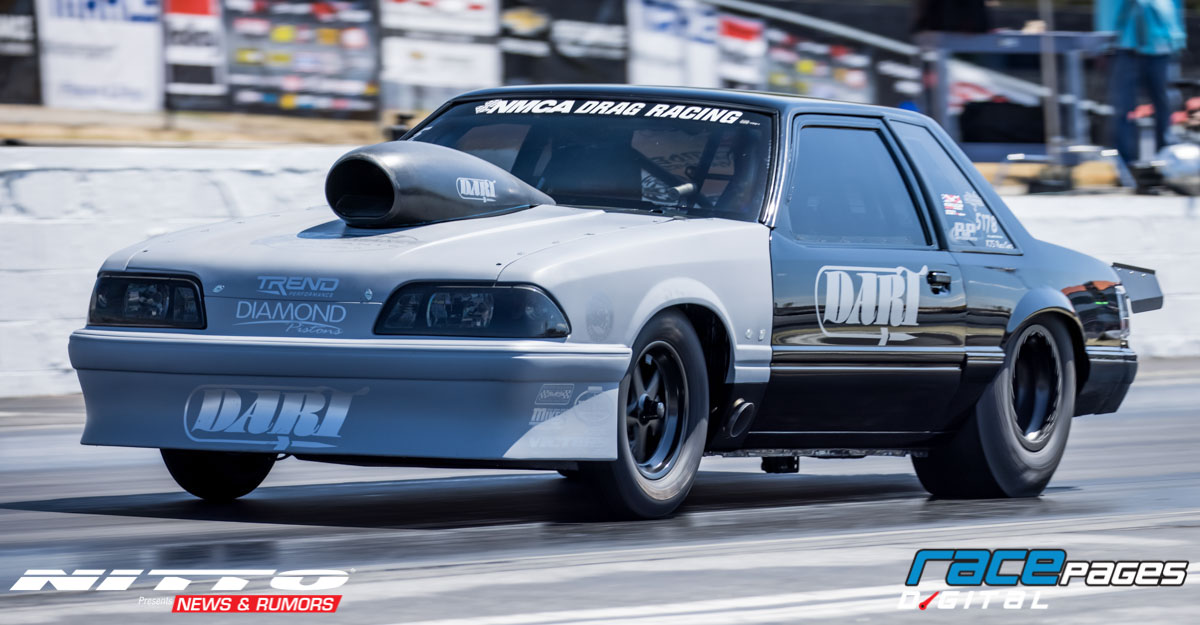 Arriving at the Scoggin-Dickey Parts Center NMRA/NMCA All-Star Nationals presented by MAHLE Motorsport at Atlanta Dragway in Commerce, Georgia, to kick off their 2021 NMCA racing season, the P&P Motorsports team of Tony Petrovski and Riste Pancevski rolled their Fox-body Mustang coupe out of the trailer and debuted their new engine combination, a 400ci LS-based powerplant that came from their new sponsor, Dart Machinery. By the end of the 2020 season, Petrovski and Pancevski started making great progress with their 598ci big-block Chevy-powered Mustang in Dart NA 10.5 competition. We had a small-block Ford prior to the big-block. You're always looking for every advantage so Tony and I started talking about a small-block, said Pancevski. I knew that Dart had done the collaboration, so I inquired about it in the middle of January and they still had the engine sitting around. The engine Pancevski spoke of was an LS Next-based engine that was a joint build between Dart and Book Racing Enterprises originally designed around Australian Pro Stock rules, as well as the NMCA Pro Stock class. Book Racing started with the iron LS Next block and installed a Winberg crankshaft with MGP connecting rods, CP pistons, and Trend Performance pins and push rods. The cam is a custom spec as are the rods, but we can tell you that the bore size is 4.200-inch and the stroke comes in at a relatively short 3.600-inch. Bolted to the off-the-shelf block is a pair of Dart's LS Next Race Series 10-degree cylinder heads, also straight from the regular stock. These pieces feature raised oval intake ports, canted valves, and wedge-style combustion chambers, and receive air and fuel via an HRE Products fabricated intake manifold and a pair of Book Racing carburetors.

On the Book Racing engine dyno, the LS small-block churned out 1,168 hp at 10,379 rpm. For racers, it's important to note that nearly all of the parts can be easily purchased, reducing the number of custom one-off parts involved and making it easier for other racers to replicate the engine's performance. Changing over to this engine meant that the P&P team's Mustang received a significant weight break over 600 lbs, and the Fox body went on a major diet to accomplish that. We were planning to lighten the front end up while we had the big-block and started working on that with Skinny Kid Race Cars at the end of last year, Pancevski explained. In addition to swapping out the heavy body parts for lightweight versions, the P&P Motorsports crew also needed a new exhaust for the new engine. For that, they turned to Ernie Miyamoto at Motofab, who was able to squeeze them into rotation and knock out the custom fabricated headers in no time flat. While that work happened rather quickly, there were plenty of other parts that didn't show up as quickly as they would have preferred. With the engine deal finalized in mid-February, there wasn't much time to ready the Mustang for the NMCA season opener in Bradenton, Florida, so the focus turned to the second race in Commerce, Georgia. We ran out of time to make it to Florida due to waiting on parts, Pancevski told us. We picked the doors up from the painter on Wednesday as they came out of the paint booth and we got on the road to Georgia. We hadn't fired the engine yet! After unloading the car at Atlanta Dragway, the team checked the fluids, brought the potent LS Next mill back to life, and used the test sessions and qualifying rounds to get data on the chassis setup and gearing in both the rearend, as well as the Turbo 400 transmission. We were pretty confident with the results we saw at Georgia. Based off of the mph, we know that the engine has the capability of running a high 7.70, low 7.80, Pancevski said. We have to work on the front half of the track and getting the car off the starting line. We are also working on the torque converter, working closely with Ultimate Converter Concepts for that. There's plenty there to pick up. We just need to get out and test.

When qualifying was complete, the P&P Motorsports team sat 9th out of 11 cars with an 8.17 performance not too bad for the engine's competition debut. In the first round of eliminations, Petrovski was on task with an .010 light to Craig Hejda's .070, but Hejda was able to drive around him for the win, 7.94 to 8.19. We didn't have any testing data, but the potential is there and we just need to put the right pieces in place, Pancevski noted. Tony and I are very thankful for our crew. They worked their butts off to make it happen. They made sure we would be in Georgia to race. We at P&P Motorsports want to thank Steve Arent at DART Machinery for this great opportunity. We also thank Ainsley Jacobs at P.TEN Marketing for playing a huge role in forming this partnership. We also thank everyone else that helped make this transition possible in a very, very short amount of time; Keith Engling at Skinny Kid Race Cars for front-halfing the car and fitting the new front end, Willie Bush at Woolf Aircraft for supplying us the header tubing, Ernie Miyamoto at Motofab for building our headers and performing other fab work, Bobby T. and LeVelle at J&B Automotive for getting our new body parts painted, Montgomery at UCC for getting our new convertor to us, Laz for completely rewiring the entire car, and Goran at Revit Motorsports for our new three-speed transmission. As Tony said post race, It was a great first outing and weekend with a complete new combo. The car went down every pass and got faster with each pass. Finally, we continue to thank our family and friends for their continued support.
Book Racing Enterprises
,
Dart Machinery
,
Dart NA 10.5
,
P&P Motorsports
,
Ultimate Converter Concepts