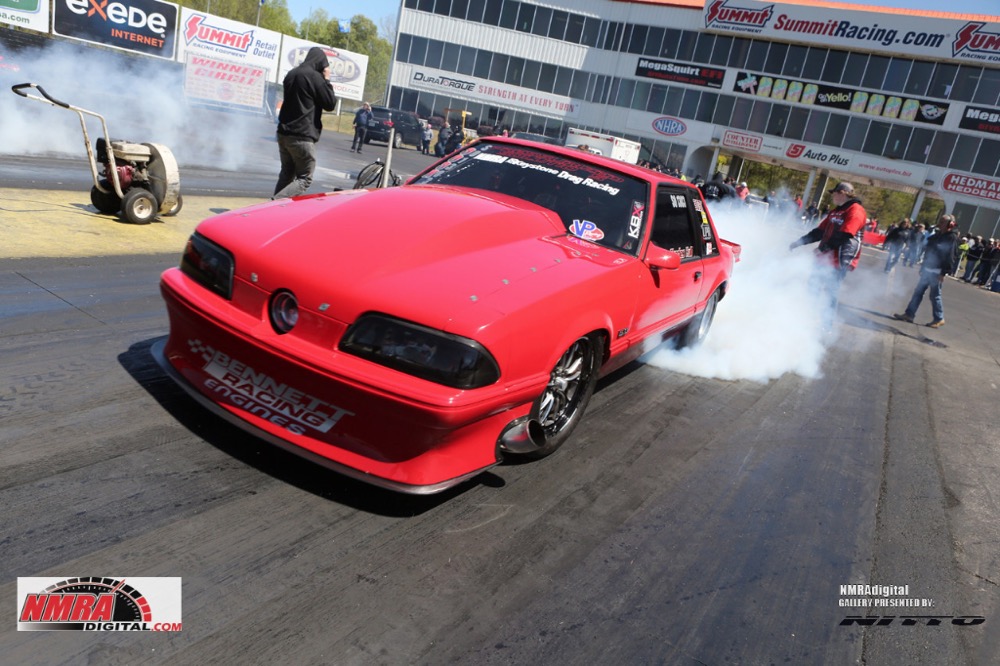 After spending several years behind the wheel of a 93 Mustang in ORSCA EZ Street, Charles Hull decided in 2008 to climb out of the driver's seat for a while, but a particular 92 Mustang with a sale sign on it was far too charming for him to pass up, and he made it his in 2014. He carefully carted it from his home in Brunswick, Georgia to Pressurized Solutions in Haleyville, Alabama, where its ten-point cage was replaced with a 25.3-spec chrome moly cage, and where RaceCraft and UPR suspension components were put in place along with ACFO shocks and struts massaged by Mark Menscer. A new carbon fiber front-end and doors by Motor City Solutions and hood by Schoneck Composites were added, and when work at that shop was wrapped up, the car which rolls on Mickey Thompson 275 drag radials wrapped around Weld V Series wheels was delivered to McVeigh's Collision Center in Waycross, Georgia, where it was painted Vermillion Red, or paint code E4, as Hull so specifically calls it. A Bennett Racing Engines-built 400 cubic-inch small-block Ford topped with 9-degree billet heads the brand which, according to Hull, shall remain unnamed as well as a billet intake made by Pressurized Solutions was put in the engine bay of the freshly-painted car, and a 98mm Precision turbo sits pretty up front when the ignition is clicked off but becomes utterly unruly when the ignition is clicked on. A M&M Transmission-built two-speed Turbo 400 and a ProTorque EV1 do their part behind the scenes to put the massive amounts of power to the pavement, and while drag racing legend John Kolivas of KBX Performance currently uses Big Stuff 3 to lay the tune, an opportunity is imminent to use FuelTech to tune the car, which trapped a best of 4.41 at 166 mph last fall while Hull was running X275. While Hull's friend and fellow racer Joel Greathouse piloted the car for some races in 2015, including the NMCA/NMRA race at Route 66 Raceway in Joliet, Illinois, Hull introduced himself to NMCA/NMRA competition at the 8th Annual NMCA/NMRA All Star Nationals presented by Miller Welders, April 7-10, 2016, at Atlanta Dragway in Commerce, Georgia. There, he entered Wiseco/VP Racing Fuels Street Outlaw, qualified sixth out of thirteen cars with a 4.64 and 162, and while he picked up to an impressive 4.48 at 166 mph in the first round, he lost on a holeshot. But NMCA and NMRA fans who had taken a liking to his calm, cool and collected personality and his consistently quick and fast car can rest assured that they'll see them again, as he plans to run the next events in both series, including the 16th Annual WyoTech NMRA Ford Motorsport Nationals, April 28-May 1 at Maple Grove Raceway in Reading, Pennsylvania, followed by the 15th Annual NMCA Muscle Car Nationals, featuring the Dave Duell Nostalgia Super Stock Classic, May 12-15, at Beech Bend Raceway in Bowling Green, Kentucky. I've always been a fan of the NMRA and NMCA, and I used to go watch when the series went to Bradenton Motorsports Park, said Hull, whose right-hand-man at the races is his son and crew chief, Davey Hull. A lot of my friends run it, like Joel Greathouse and Jared Johnston, and I'm glad they suggested I try it.