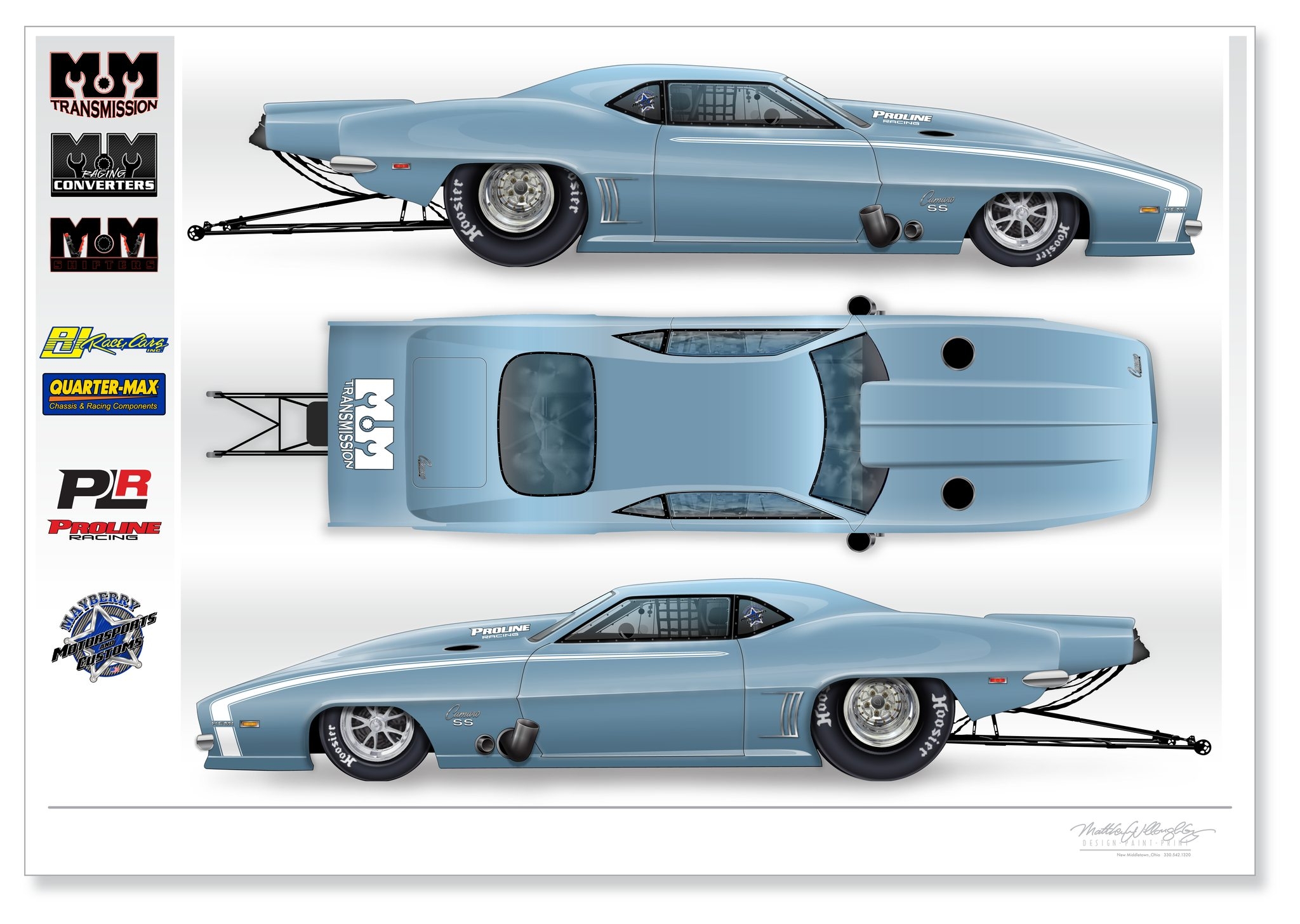 After M&M Transmissions’ head honcho Mark Micke won Radial vs the World at the inaugural DXP Sweet 16 event in 2018 in Jason Carter’s 1978 Chevy Malibu for an unprecedented $101,000, no one doubted the potential of a twin turbo combination. However, in the years since, blower cars have taken the stage while the turbocharged entries have fallen by the wayside.

Micke, however, is determined to bring turbo cars back to the forefront of doorslammer drag racing and is in the process of building a killer new 1969 Chevy Camaro SS Pro Mod to make it happen.

“Traditionally, the biggest struggle with turbo cars over the years has been to get them spooled properly with a torque converter that’s tight enough to make the run,” explained Micke, who has been relentlessly working towards improving drivetrain technology for turbocharged applications at M&M Transmissions. “It’s been said that once we can get turbo cars to 60-foot strong, everyone else will be in trouble.”

One of the biggest hurdles has been to get the turbochargers to spool up quickly to avoid detrimental heat build-up in the converter. Entries in Pro 275 and Limited Drag Radial have shown advancements in recent racing, and Micke is at the forefront of spearheading the technology to make it possible.

“For the past year or so, we’ve been working with billet aluminum pumps in the torque converter that give us new avenues to work with since we’re no longer married to the OEM-based pumps we used to use,” he noted of the “clean slate” with which he can now design converters. “This all adds up to turbo cars having more consistency in the first half of the run, and in the 60-foot. Horsepower has never been the issue – turbo cars make plenty without trying – we just have to use it effectively.” In the summer of 2021, Micke acquired an RJ Race Cars/Quarter-Max-built chassis that had been started for another customer who later pulled the plug. The pipe-and-body Pro Mod wound up in Canada with Jay Santos where it sat for nearly two years before Micke picked it up.

Thanks to help from Matt Guenther getting the Camaro across the border during the Covid-19 closures, Micke was able to deliver the piecemeal project to Blake Housley at Mayberry Motorsports and Customs in Kansas City, Missouri. Twin Garrett turbochargers flank each bank of the powerful V8, and new electronic wastegates from Turbosmart have been integrated as well. “Garrett is the best; they don’t mess around and have a first-class engineering department,” affirmed Micke, who is also excited to be working with Marty Staggs at Turbosmart. “These new electronic ‘gates are going to be a really big deal”

Next, the engine was fitted with the latest and greatest Turbo 400-based gearbox from M&M Transmissions along with a matching M&M full-billet lock-up converter and shifter. Bohr Racing Products hooked Micke up with a trick titanium bellhousing and stout flexplate.

Housley is in the final stages of finishing up the build, which will soon head to S&D Enterprises to have the ascot blue hue and white stripes sprayed, as depicted in a rendering by Matt Willobe. Although the Camaro is destined for Outlaw Pro Mod use as Micke is simply too busy focusing on serving his customers to commit to a traditional class-racing series schedule, he and Housley worked closely with NHRA’s Technical Director, Bob Blackwell, to ensure the chassis met the latest standards in NHRA Pro Mod legality.

With Penske struts in the front and Ohlins shocks in the rear, all from Chris Bell at Kinetic Engineering, and rolling on quintessential Weld wheels, Micke’s new Pro Mod 1969 Camaro will primarily be a research and development platform for his core group of partners. The main focus of the car will be to chase big numbers in the quarter-mile in Outlaw Pro Mod trim, including the record, while helping Micke’s longtime supporters elevate their own programs as well.

“We’ll hit some of the bigger outlaw-style events and expect to have the car done later in the year,” affirmed the innovator, who is already excited about attending the Snowbird Outlaw Nationals at Florida’s Bradenton Motorsports Park in December of 2022. “We really want to get turbos back in the game for Pro Mod and believe this will be the car to do it.”