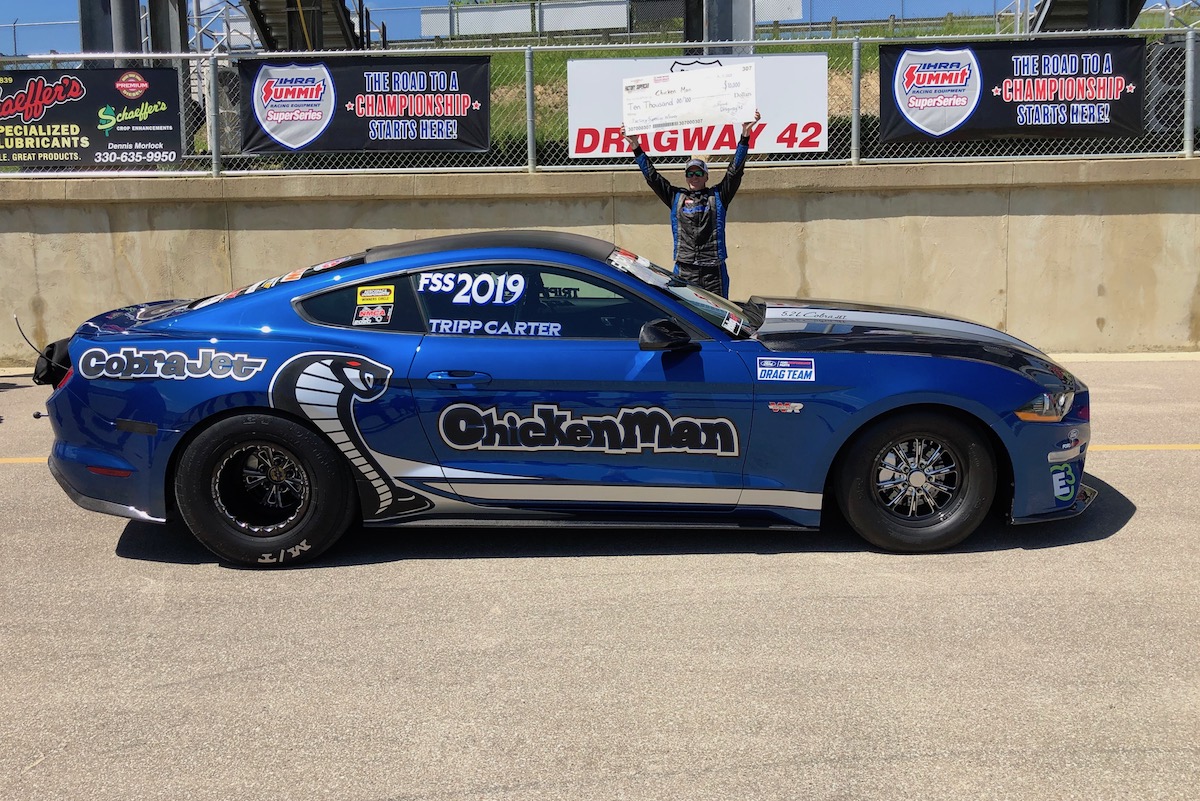 By Mary Lendzion Photos courtesy of Tripp Carter When the Mustang Cobra Jets, COPO Camaros and Challenger Drag Paks of the NMCA Holley EFI Factory Super Cars category are called to the lanes, heads turn to see the hot rods. They're hard-launching, they haul and they're reminiscent of the early days of Super Stock. Among them is the 2019 Mustang Cobra Jet driven by the talented Tripp Carter, who's currently holding down the fourth place in points in NMCA Holley EFI Factory Super Cars after qualifying in the second spot with a 7.69 and going several rounds at the 18th Annual NMCA Muscle Car Mayhem presented by Holbrook Racing Engines in March at Bradenton Motorsports Park. More recently, the Memphis, Tennessee-based driver took part in an invitational race featuring a limited number of Factory Super Cars, Stock, Super Stock and Nostalgia Super Stock competitors, May 30-31 at Dragway 42 in West Salem, Ohio. His 2019 Mustang Cobra Jet built by Watson Racing, powered by a 327 cubic-inch Coyote engine, Whipple supercharger, Turbo 400 by Joel's on Joy and converter by Neal Chance was tuned by Kim Mapes to tackle the tough competition. As a result, Carter clocked a 7.64 to qualify in the second spot, just behind lead qualifier Drew Skillman. 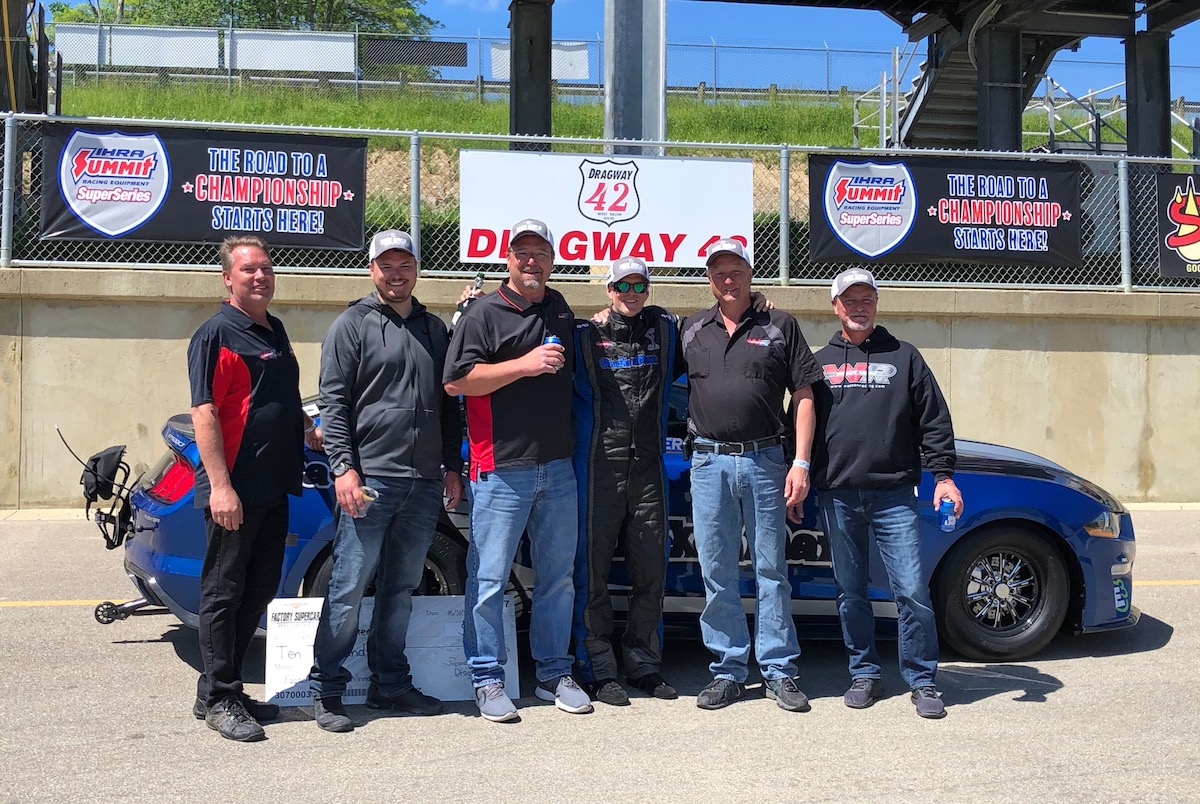 We didn't have any trouble in qualifying, and a lot of that had to do with Kim Mapes, who's so calm and methodical when he's tuning with the FAST EFI, said Carter. He's definitely one of the best, and he was lining me up, along with Rich Adamek, and the rest of the Watson Racing guys were helping all of us. With favorable weather that was prime for quick and fast elapsed-times paired with on-point track prep by Total Venue Concepts Carter was able to get through a forceful field of drivers, and made it to the final round of eliminations. There, he lined up alongside Drew Skillman, and proceeded to put down a 7.57 and 183 mph to pick up the win and the wonderful $10,000 prize it came with. That elapsed-time and speed are quicker and faster than the current NMCA Holley EFI Factory Super Cars records of 7.66 and 181 set by Chris Holbrook. I had some tough competition to get past, including Clay Arnett, Kevin Skinner, Bill Skillman and Drew Skillman, and everyone was set on kill trying to be the first in the 7.50s and to win the $10.,000, said Carter, who also has a lot of help from his girlfriend, Wanda Hunsucker. It was an incredible feeling to be able to do it at the race that was put on by two fellow NMCA Factory Super Cars drivers, Jim Betz and Jason Dietsch. Soon, Carter will be heading to the 12th Annual Scoggin-Dickey Parts Center NMRA/NMCA All-Star Nationals, June 25-28 at Atlanta Dragway. 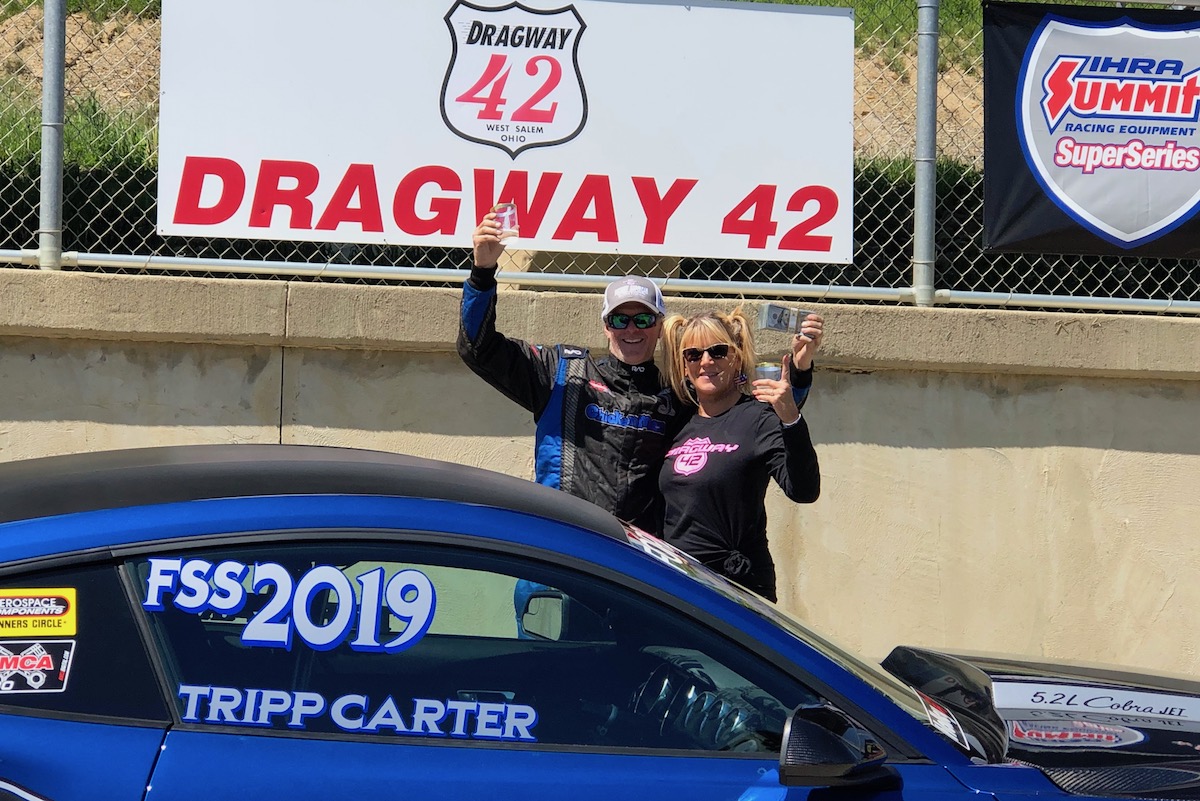