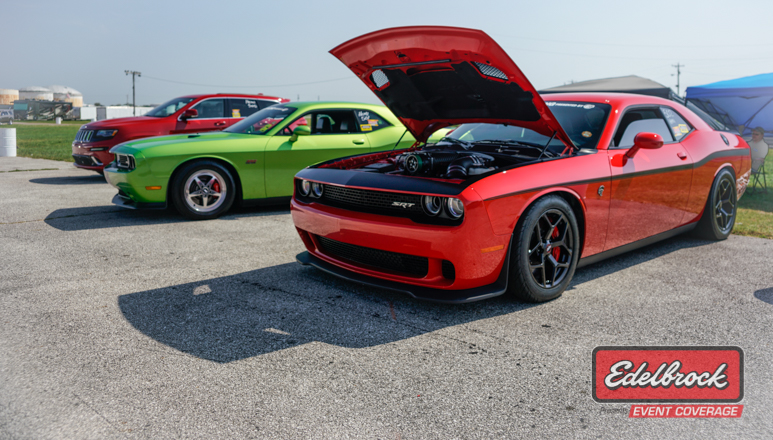 The championships come down to this weekend here at Lucas Oil Raceway Indianapolis as the 2018 NMCA Drag Racing season presented by E3 Spark Plugs comes to a close. Some classes are pretty much locked up with the points, while others are in tight, fierce battles for the championships. While today's test and tune looks to be a hot one, we're expecting cooler temps to continue throughout the weekend, which should make for some record-breaking runs. Rumor has it that the NMCA has given away all 75 of Dodge//Mopar's free entries to the Dodge//Mopar Hemi Shootout this weekend, and the Modern Mopars of Indiana car club had a lot to do with that. Brothers Bill and Dennis Cherry have been racing their Hemi-powered Challengers in NMCA competition for a few years, usually in Gear Vendors True Street, and this weekend they will be running in the Hemi Challenge. Bill drives the 2015 Hellcat, which has enough mods that has the Brownsburg, Indiana, resident hoping to get into the 10s this weekend. Dennis drives the 392 model dressed in the vibrant Green with Envy hue. Also running in the class is Chris Lett who will be giving his 2014 SRT8 Jeep it's first taste of the quarter-mile this weekend. 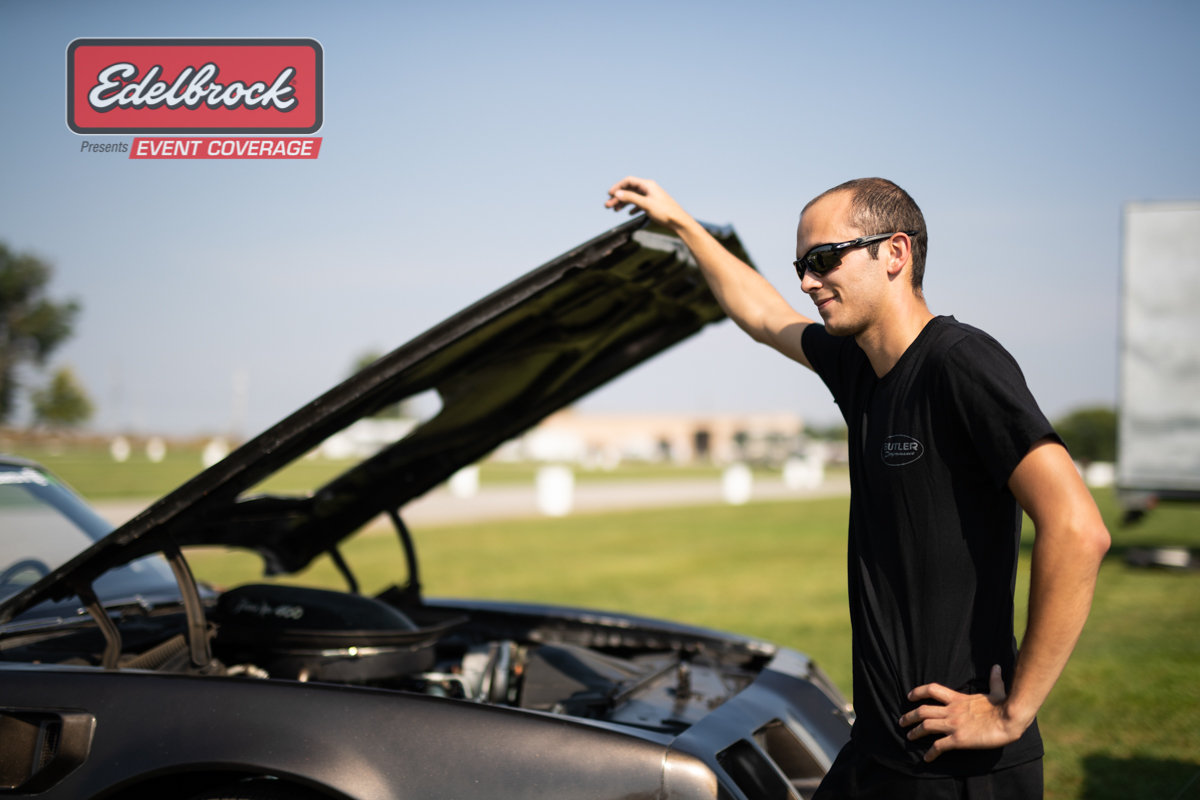 In addition to the Hemi Challenge, this stop on the NMCA series also plays host to the second appearance of the Factory Appearing Stock Tire racers. Jacob Marquis of Willington, Connecticut, got started with the group when his father, Dave began racing his 1968 Firebird convertible with the group, and Jacob picked up this 1979 Trans Am to take his own turn behind the wheel. The second-gen F-body features a hand-me-down Pontiac 400 engine with a Turbo 350 trans, and has been as quick as 12.23 at 113 mph. Jacob says the Poncho engine made about 480 hp and 560 lb-ft of torque before a recent cylinder head swap that has since shaved a 1/4 second off the car's elapsed times. Longtime Ford employee and racer Brian Wolfe debuted his notchback in Vortech Superchargers Street Outlaw at the last NMCA race in Norwalk. A bevy of issues prevented he and his team from advancing in eliminations, but Wolfe has since made a number of changes to remedy those issues and hopes to let the zoomies loose in competition this weekend. General contractor Tom Lawson of Lincoln, Nebraska, takes a month off each year to travel with his wife and enter his 1969 Top Sportsman Camaro in races all over. His Bob Bunker chassis'd machine will likely fit into VP Racing Fuels Xtreme Pro Mod this weekend, and we look forward to hearing the 700ci Steve Schmidt big-bock sing. 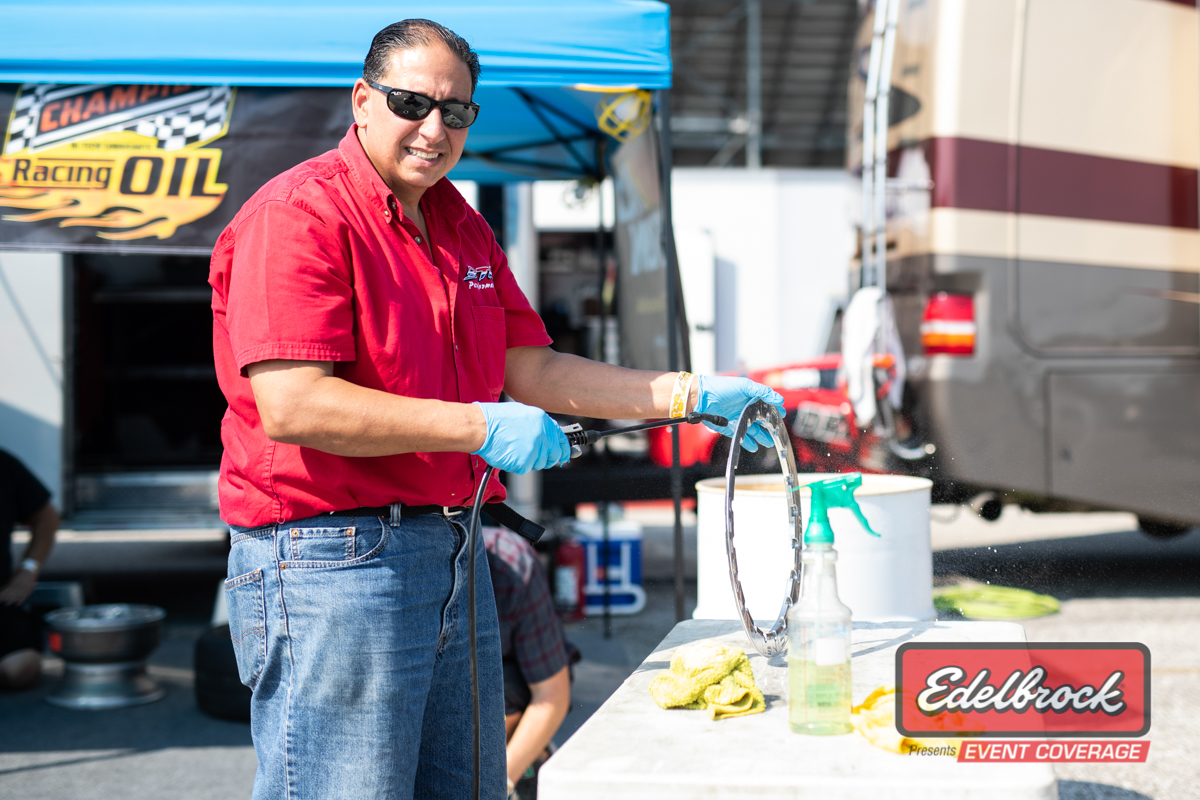 BTR Performance's Bill Trovato was in the middle of mounting some new tires earlier today when we stopped by the Edelbrock Xtreme Street racer's pit today. Trovato's nitrous-fed and LS-powered Fifth-Gen Camaro has proven to be inconsistent for the New York native all year long. Despite that, he still has a shot at the title, as he currently sits fourth in points for the year. 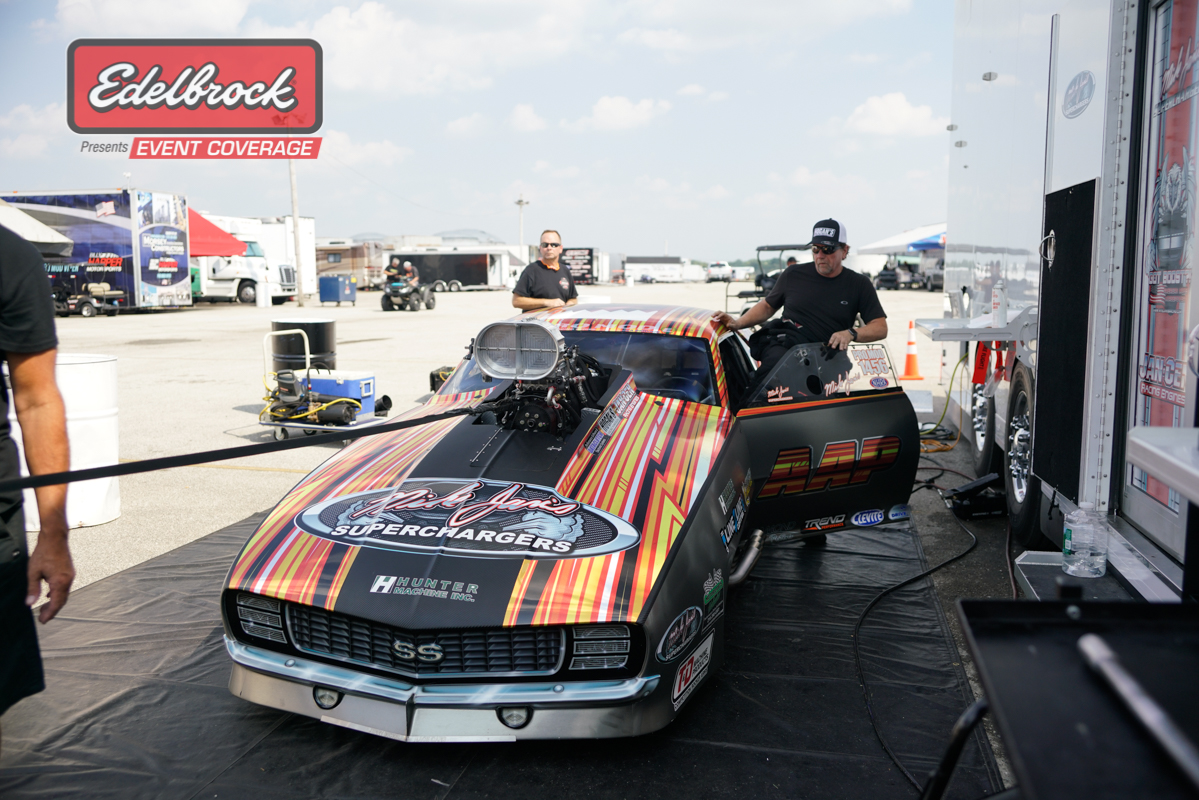 Tied for points with Rickie Smith in the NHRA's E3 Spark Plugs Pro Modified category is Mike Janis who is here today testing his Jerry Bickel-built 1969 Camaro that is packing an in-house built 526 Noonan Hemi engine and the latest Mike Janis Racing 14-71 Roots supercharger. The Buffalo, New York, resident will head to St. Louis next where he'll continue his quest for the championship. On the NMCA side of the category in VP Racing Fuels Xtreme Pro Mod, Don Walsh Jr. sits just a hundred or so points out of first place going into this race. After suffering transmission problems at the last race in Norwalk as well as the Shakedown at Summit Motorsports Park, Walsh pulled the twin-turbo car out of the trailer today and rocketed to a 3.78 pass in the heat of the day. While Walsh holds the speed record for the class, Jason Hamstra holds the ET record at 3.70, has run 3.6s a few times now with his screw-blown 1969 Camaro, and also currently sits in the number one spot for points. 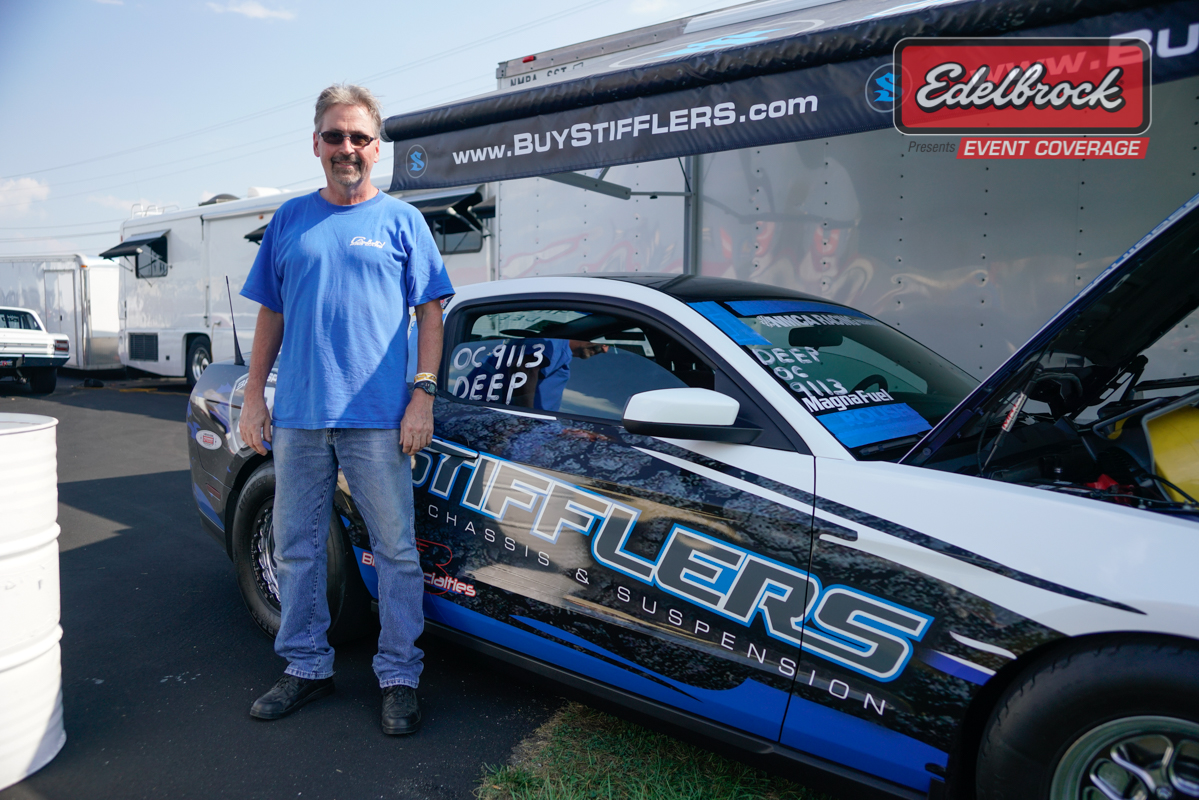 Back-to-back Roush Performance Super Stang champion in the NMRA series, Marvin Knack is competing in MagnaFuel Open Comp this weekend to "shake the rust" off since it's been a hot minute since he hast raced in Joliet. The NMRA World Finals are next weekend and Knack currently sits number one in points in the category and is looking to complete the hat trick. Here is Friday's race schedule 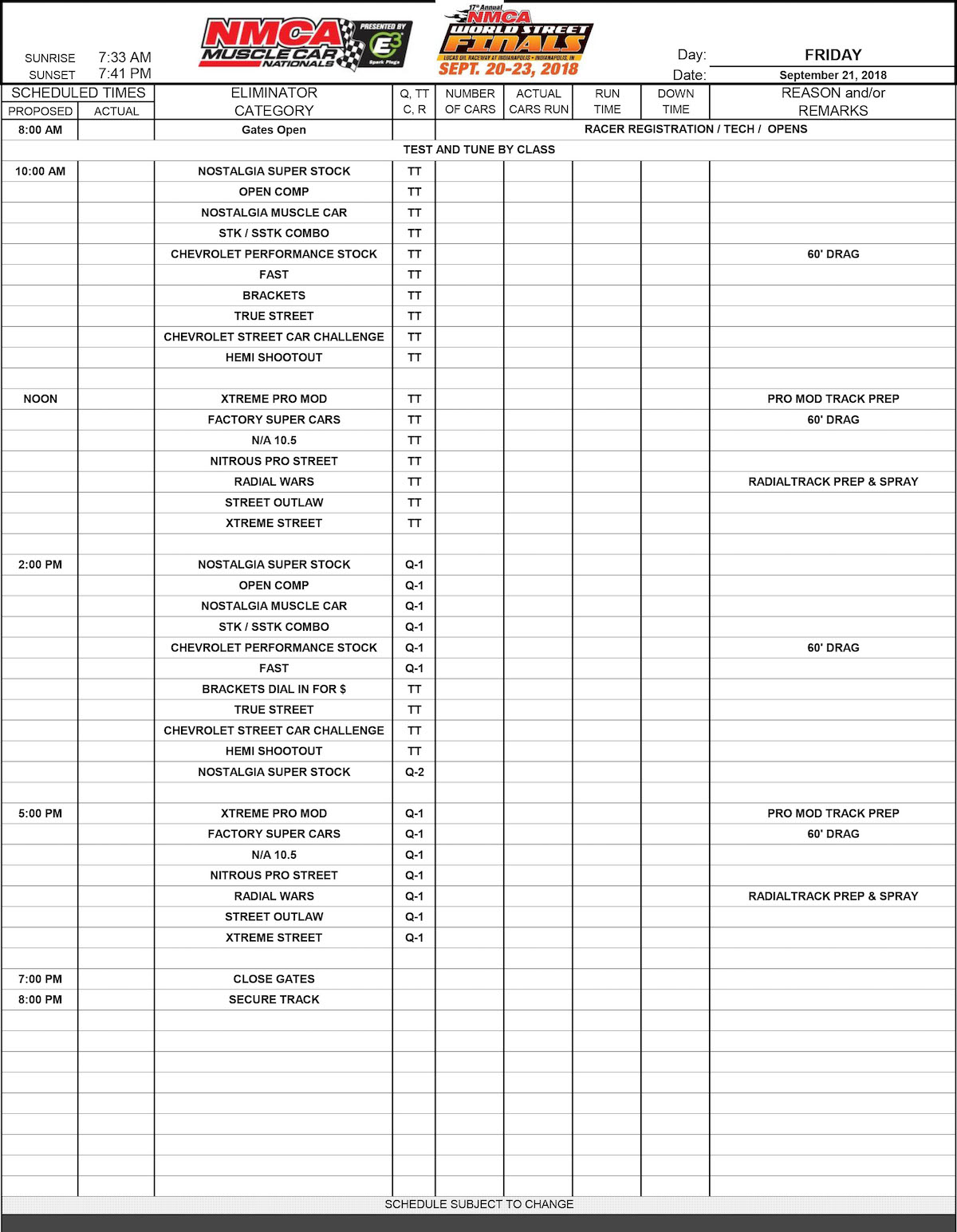