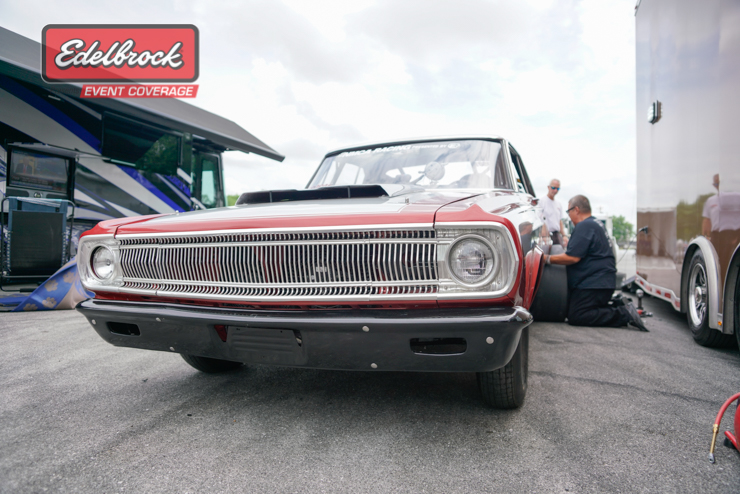 Test and tune is underway for the 17thAnnual NMCA Quick Fuel Technologies Bluegrass Nationals presented by Scoggin-Dickey Parts Center and while some race are getting some early laps in, others, like ATI Performance Products Nostalgia Super Stock racer Dave Schultz are making some last minute preparations before getting on track. This event plays host to a number of races within a race, as it is home to the legendary Dave Duell Classic Nostalgia race, as well as the second round of the Chevrolet Performance Challenge Series. 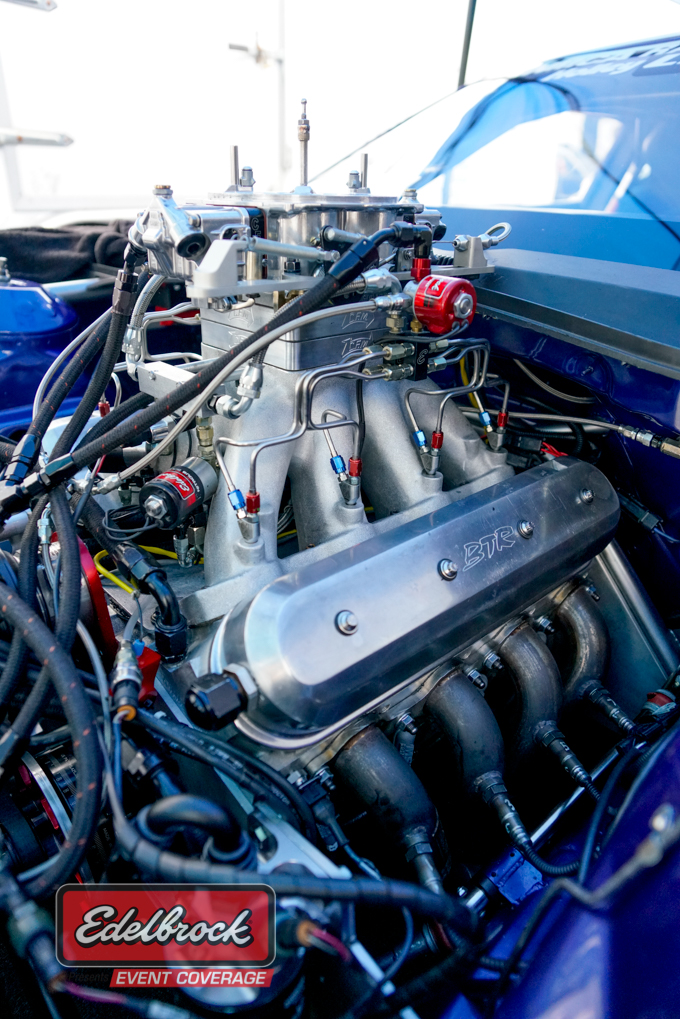 Edelbrock Xtreme Street racer Bill Trovato currently leads the class in points towards the championship, and he'll be looking to improve the performance of his LS-powered and nitrous-oxide enhanced, Fifth-Gen Camaro. Trovato has been working on his progressive nitrous control off track sine the last race and feels the car should be more consistent now. 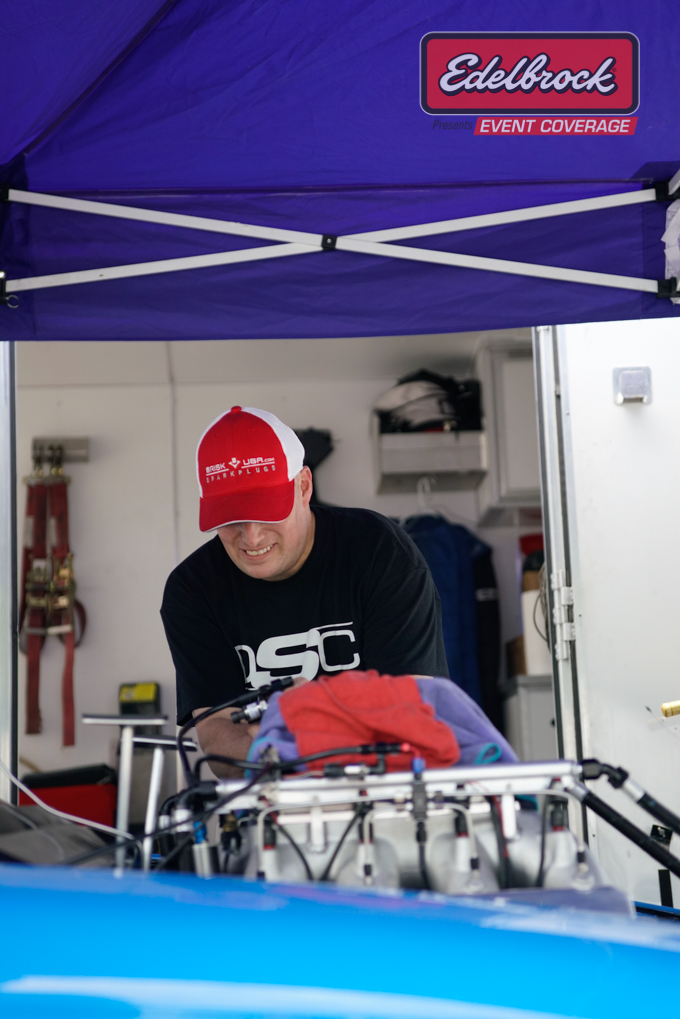 BES Racing Engine's Nick Bacalis brought out the company's SN95 Mustang, which was run in the Vortech Superchargers Street Outlaw category last year with a huge, naturally aspirated powerplant. This year they have gone to a much smaller engine with an Induction Solutions nitrous oxide system on board and will be working on sorting the combination and the chassis out this weekend. 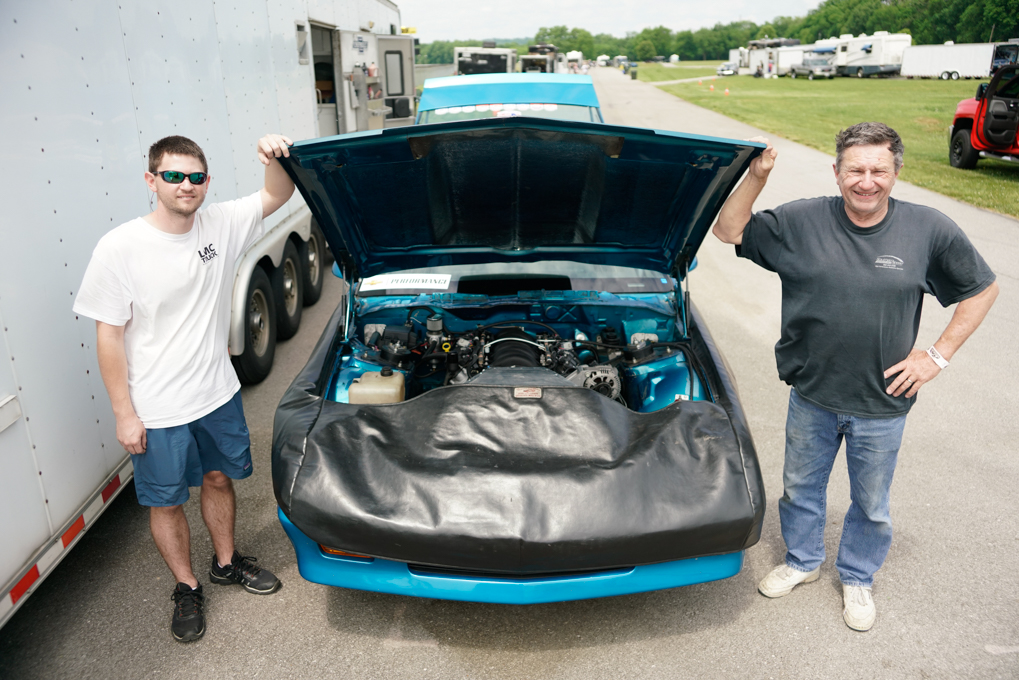 Making his debut in Chevrolet Performance Stock at this race last year, Scotty Duncan and his father Gary have been fine tuning their 85 Camaro this year. Two broken transmissions and Scotty being hospitalized for some time have prevented the duo from competing at the first two races this year, but recent testing revealed that they've been making gains since last season. 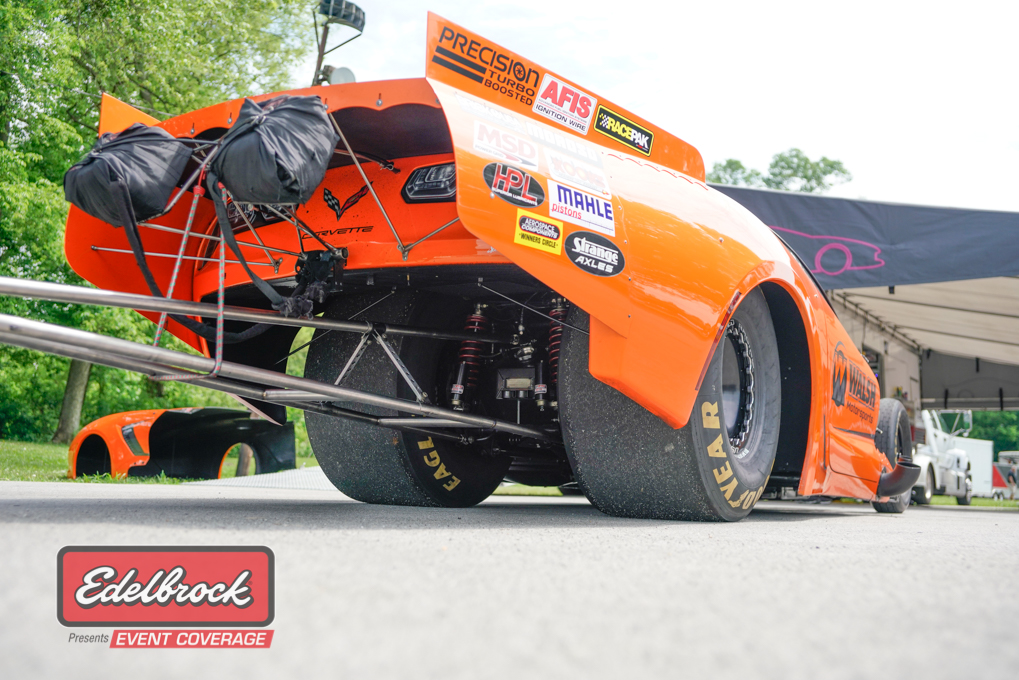 We grabbed a quick word with VP Racing Fuels Xtreme Pro Mod driver Don Walsh Jr. as he and his crew pulled their beautiful C7 Corvette out of the stacker, and Walsh informed us that they have been scrambling since last Saturday when the car sustained significant chassis damage during a test session at Milan Dragway. Skinny Kid Race Cars grabbed the welder and conducted the chassis repairs, and then it was up to Walsh and crew to put Humpty back together again and in the trailer for its trip from Michigan to Kentucky. 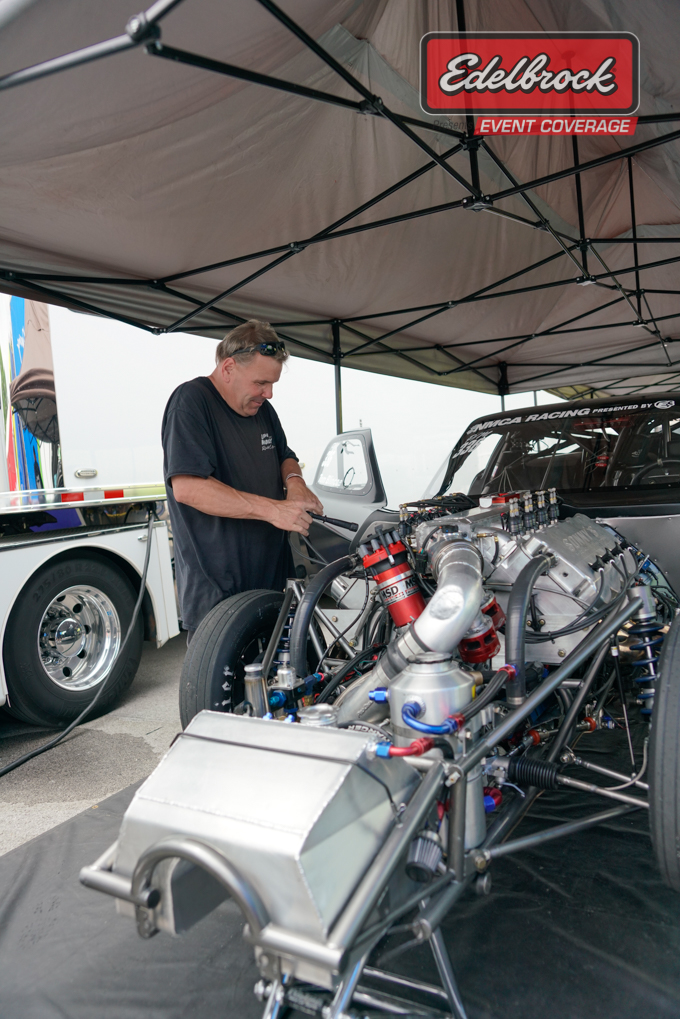 Another team that was scrambling this week was that of Tom Blincoe and David Monday. During a race two weeks prior, Blincoe's Corvette got loose at the top end, went airborne and came to rest upside down on the retaining wall. Other than a scrape from climbing out of the car, Blincoe was unharmed, but the Vette needed quite a bit of work, so it was Monday started making calls that Saturday, and two days later was on the way to Florida for a replacement body. The Tennessee-based David Monday Race Cars then got to work putting a new front clip on, fixing the damage to the intake manifold and supercharger tubing, as well as more chassis work at the back of the car. Blincoe and Monday made it here for the race and are getting ready to make their first hits this afternoon. The duo also told us that Monday will be assembling two brand new 18 chassis to be fitted with C7 Corvette bodies in the very near future. 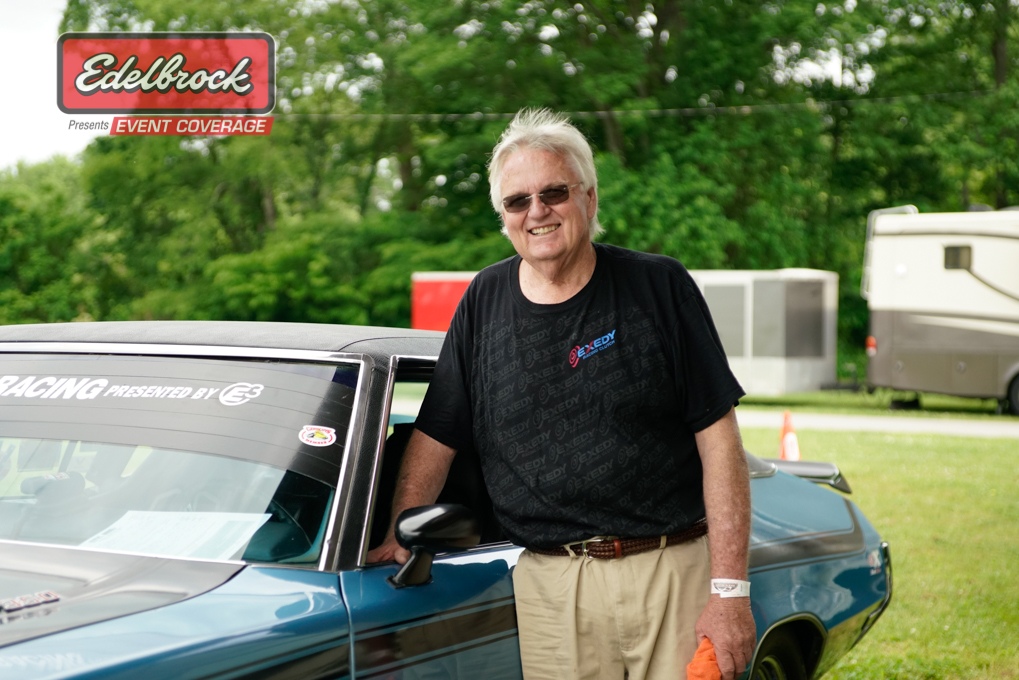 While he can often be found racing in the Super Stang category in the NMRA drag racing series, Bobby Barrick arrived in Bowling Green with his grandma's Buick Skylark and intends to mix it up in the Detroit Truetrac Nostalgia Muscle Car ranks this weekend. While being recently dressed up as a GSX edition, the Skylark is an original 350-powered car with just 61,000 original miles on it. Barrick had the motor gone through, but it still used the original block and heads. It's run in the low 12s in testing. 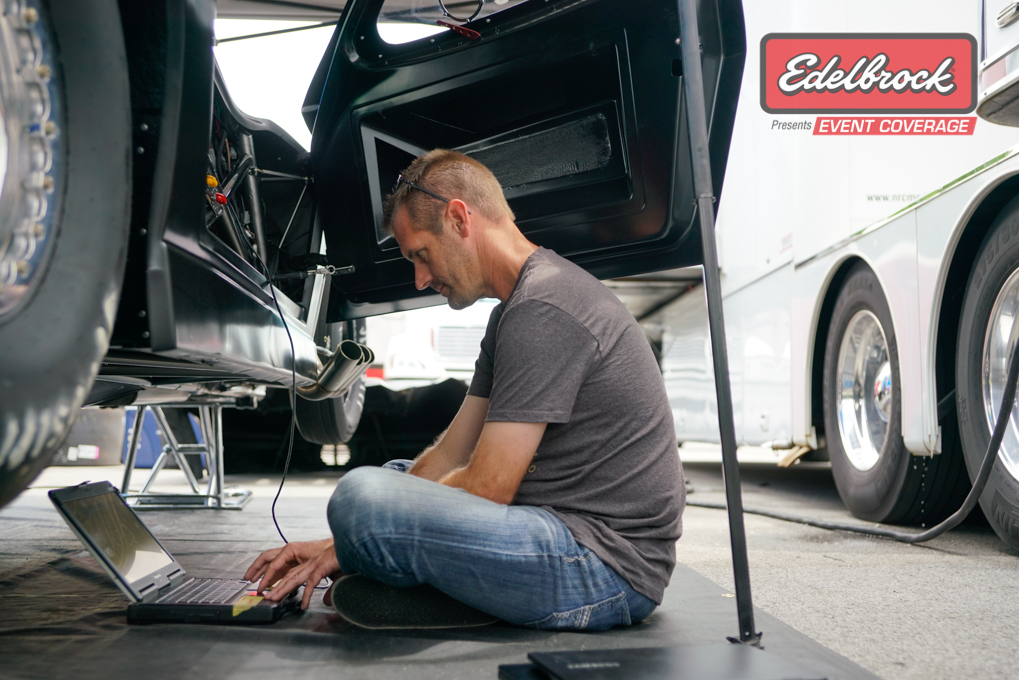 It's another day at the office for PTP Racing's Patrick Barnhill, who is on hand tuning a number of customer cars, including Tom Blincoe's Pro Mod Corvette. 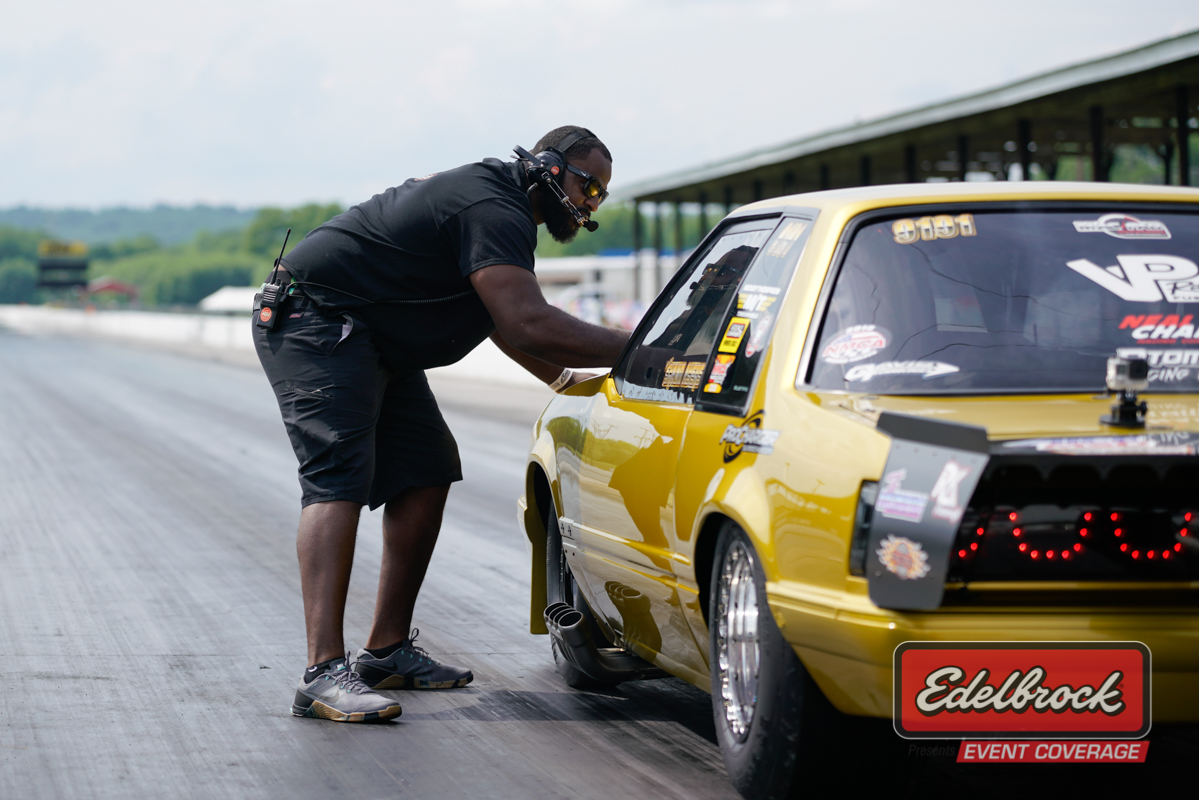 NFL Pro Bowler and Eagles Defensive Tackle Fletcher Cox giving his driver Shawn Ayers a little pregame talk at the starting line during testing today. The team is on the warpath in Vortech Street Outlaw this year having won the first two events of the season. 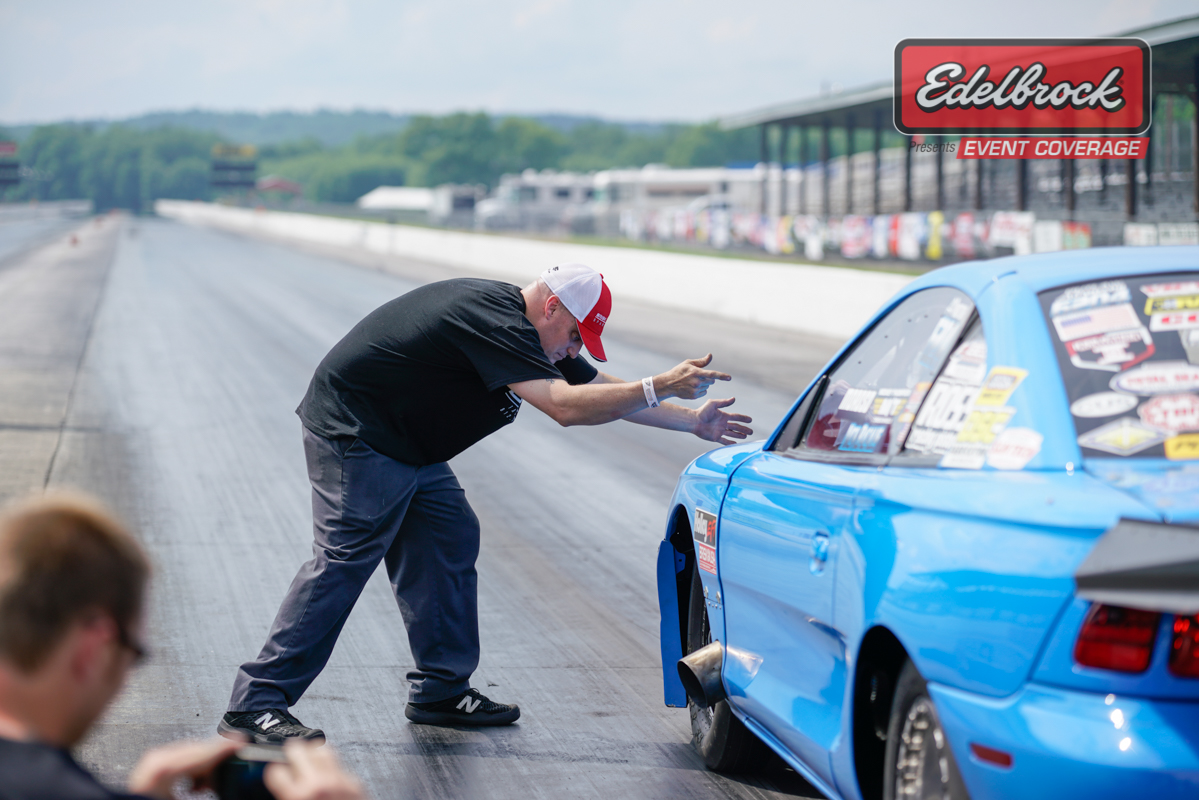 Earlier today we reported on Nick Bacalis switching to a nitrous small-block combination and one other thing he told us was that Radial Wars racer Isaac Preston might be taking the wheel for a few laps this weekend and it would appear that was the case with Bacalis pulling the BES Racing Engines Mustang into the beams during testing today. 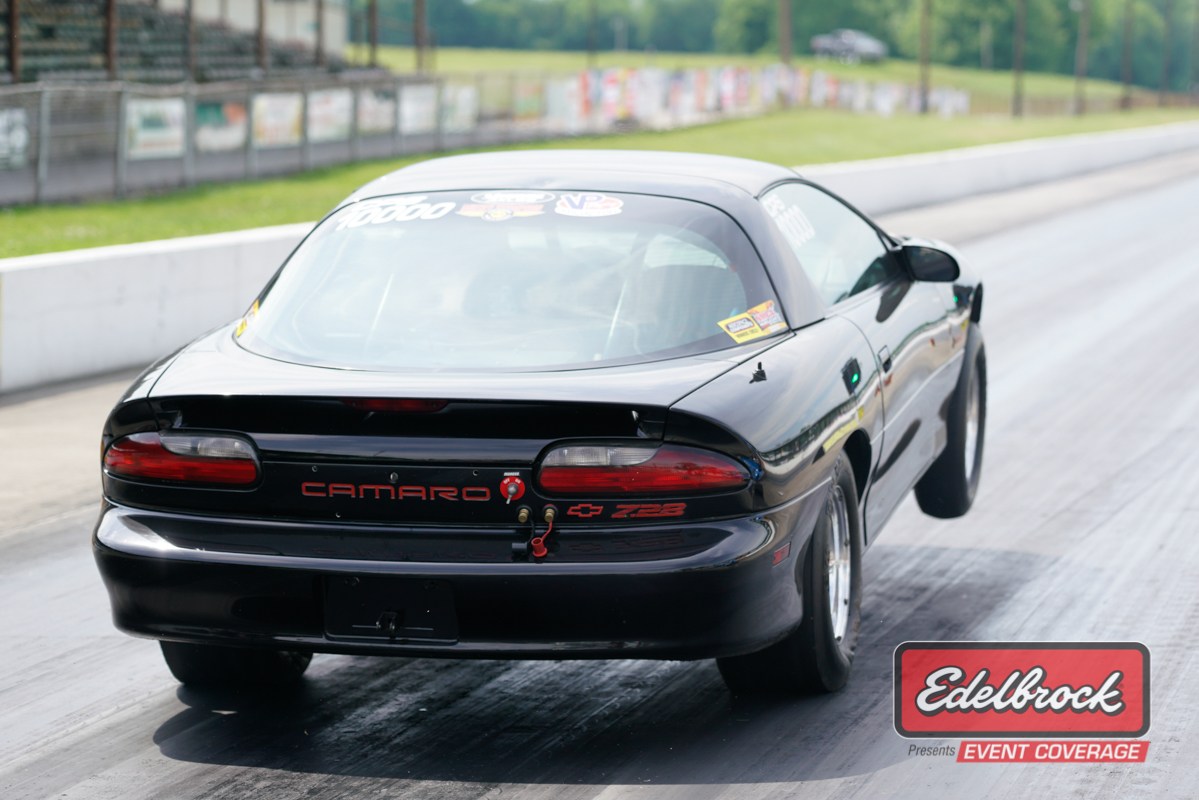 Joining the Chevrolet Performance Stock ranks in the class' first year was Heath Shemwell of Kentucky. While his family business has taken him away from racing more recently, he blew the dust off his Fourth-Gen Camaro and was making test hits today to shake the cob webs out. 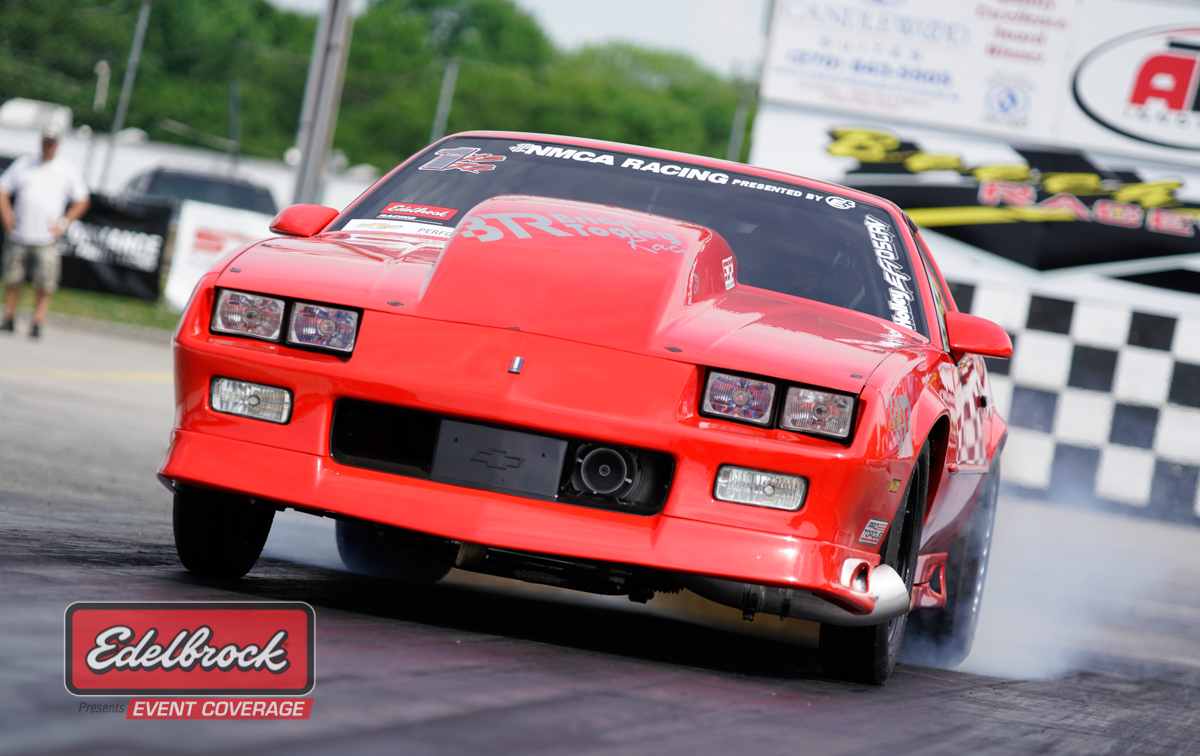 Having bagged both the NMCA Xtreme Street and Chevrolet Performance Real Street championships in 2017, Jessie Coulter has been the man to beat. With LSX power under the hood of his F-body, Coulter will be a shoe in for the Brian Tooley Racing Real Street Shootout that is taking place this weekend as well. 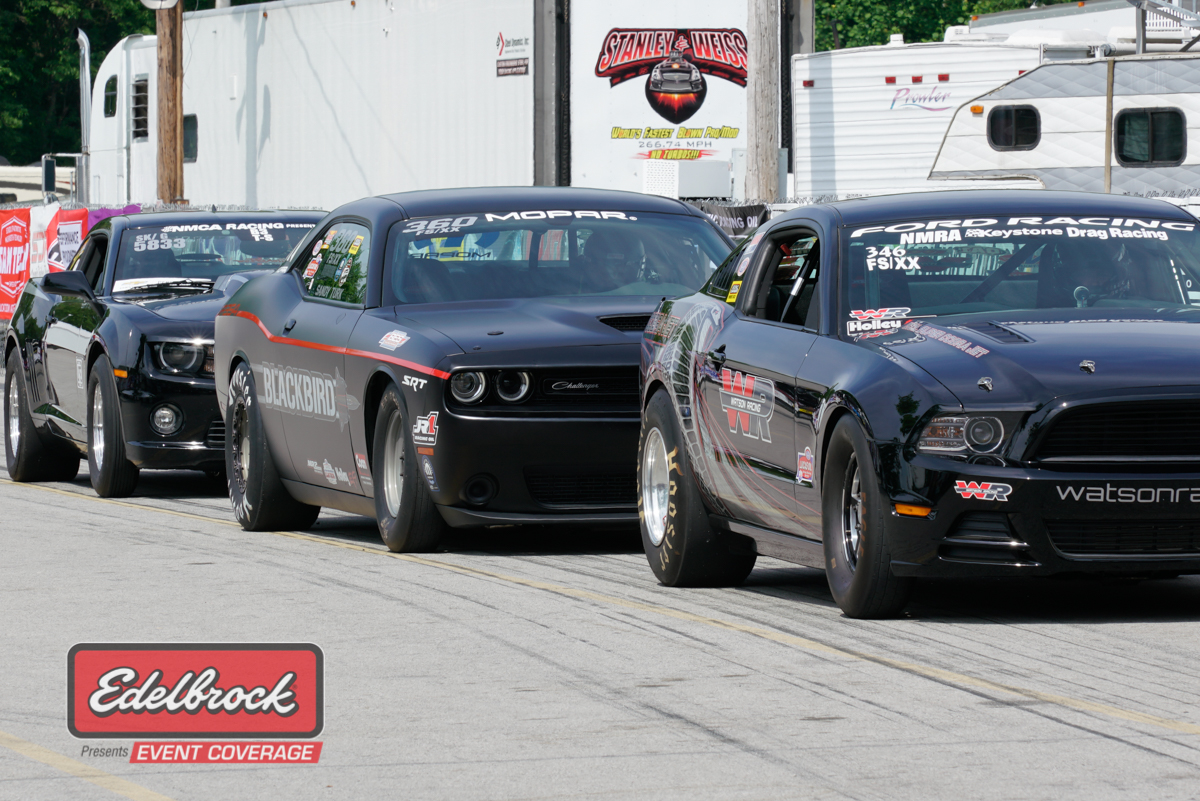 The Holley EFI Factory Super Cars category is a full-on battle for brand supremacy these days. The Cobra Jet Mustang and COPO Camaro had a good run of owning the class, but Geoff Turk was the first to bring a Drag Pak, and the first to collect a 7-second elapsed time slip, a feat that earned him a $10,000 pay day courtesy of Holley and the title of founding member of the Holley EFI 7-second club. With Joe Welch bagging the Bradenton win at the season opener this year in his Drag Pak, the factory wars are on!   Friday's Schedule 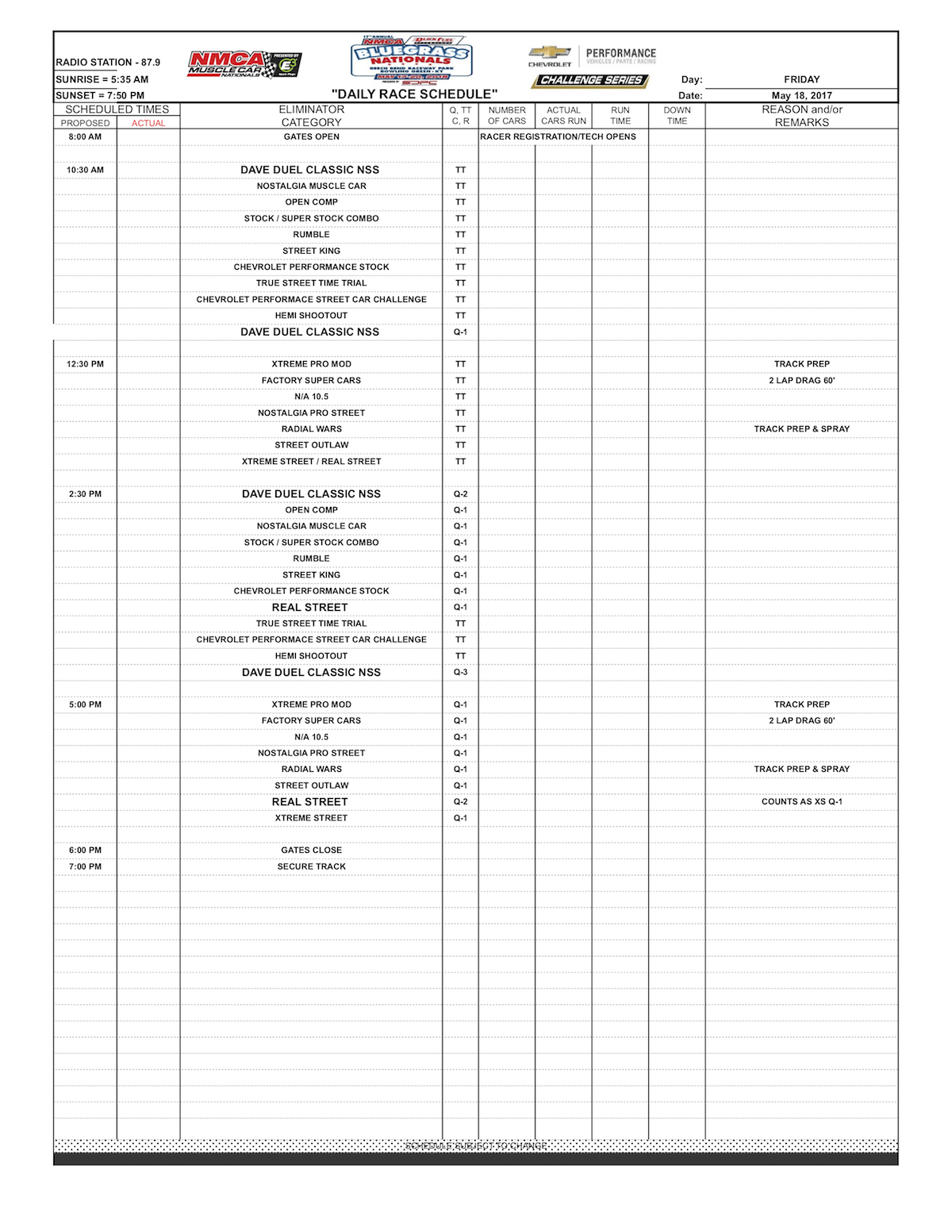