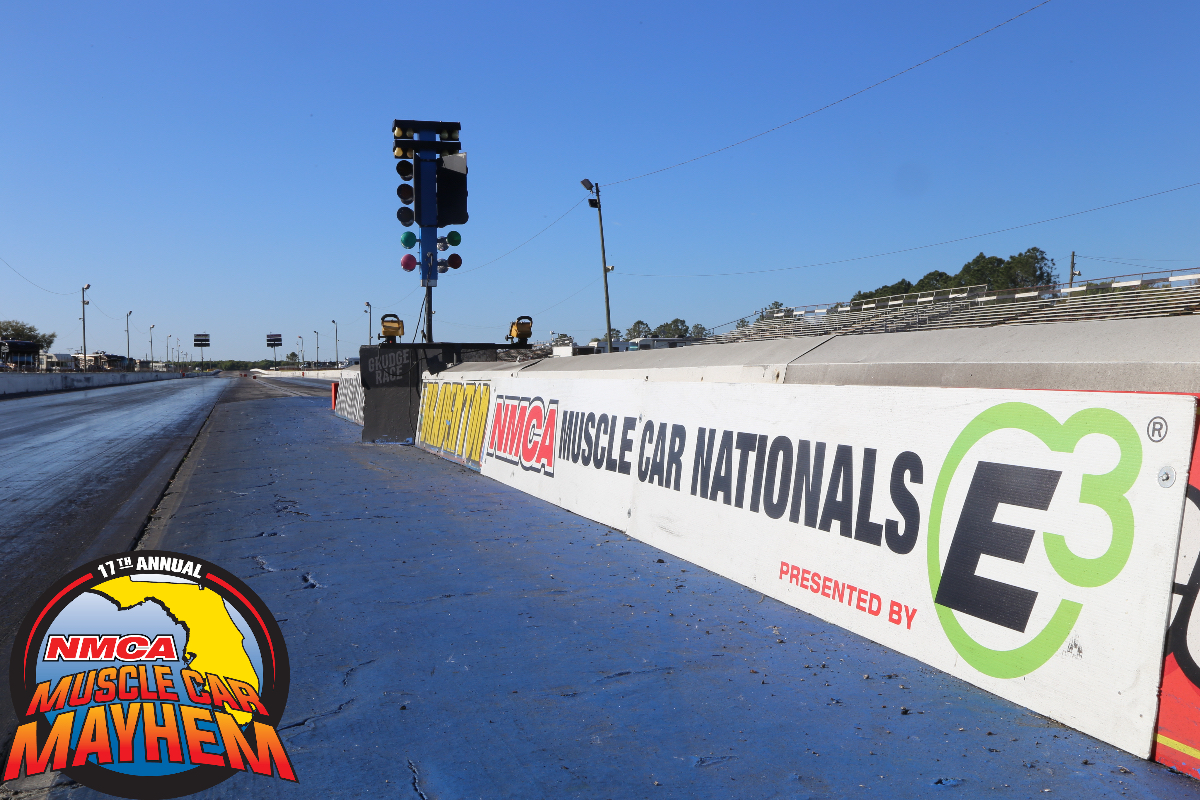 As cold blankets much of the country, racers headed south to kick the tires and light the fires at the 17th Annual NMCA Muscle Car Mayhem. Presented by E3 Spark Plugs, the NMCA series runs through six events with the season opener kicking off at Bradenton Motorsports Park today under sunny skies and cool weather. The racer rigs were lined up early this morning in anticipation of getting on the drag strip for the first test hits of the 2019 NMCA season to prep for a shot at a trip to the Aerospace Components Winner's Circle. The season opener promises a massive field of ground pounding VP Racing Fuels Xtreme Pro Mod machines and a stout field of Holley EFI Factory Super Cars racers vying to fill up the ranks of the Holley EFI 7-second Club during qualifying. 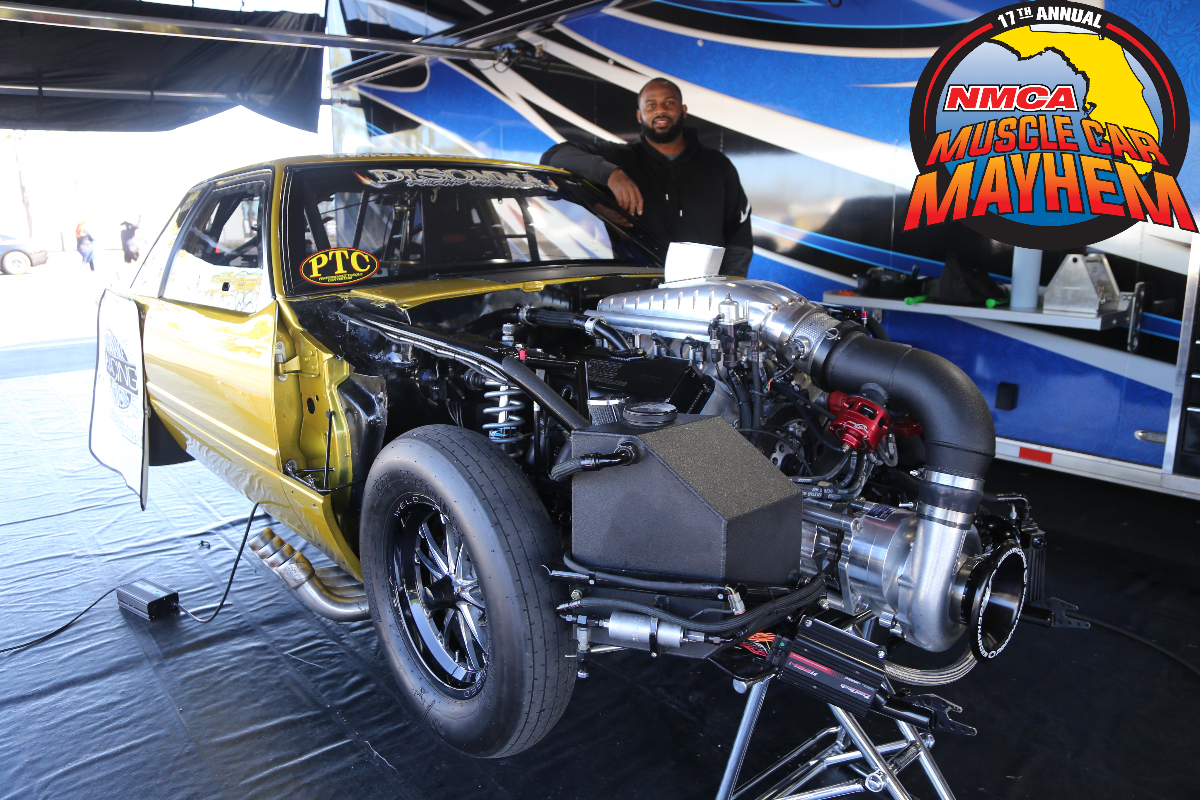 Carrying the momentum from last season's championship run, team owner Fletcher Cox (pictured) and driver Shawn Ayers are running largely the same combo, save for the smaller ProCharger and adjusted weight needed to run in Mickey Thompson Street Outlaw. We will get a handle on it, go out and test and see if we can be competitive. And the end of the day I know that we will do everything we need to do to go out and get it done, Cox explained. We have no data with the small blower and we only got two test hits yesterday. We are hoping to get some test hits today and try to get ready for the race. The biggest thing right now is time, but that's why I put this team together.

Talk about a last-minute thrash. Ted Hughes new Joe Hornick-built engine was hot off the dyno last night in North Carolina and arrived this morning at Bradenton Motorsports park where they were working furiously to install it in his Holley EFI Factory Super Cars COPO Camaro. Once installed, they just hope to get in running cleanly down the track to sort out the new combo. Fortunately his race weekend won't be all about chasing a new combo, as he will also campaign a Camaro in the Chevrolet Performance Stock presented by Scoggin-Dickey Parts Center class.

Bruce Lang is running his gorgeous 1968 Plymouth Barracuda in the Quick Fuel Technology Nostalgia Super Stock class this weekend. Having travelled to the Sunshine State on Monday, he was able to click off a couple of test hits and run his quickest time ever a 9.42 141mph. Only back in the drag racing game for a few years, Bruce has owned the Cuda for 20 years and its clean paint job has looked this good for 15 of those years.

Making the last-minute call to attend the 17th Annual NMCA Muscle Car Mayhem, Rick Feeney is eager to get some test hits on his new 526-cube Alan Johnson engine. As such, he made the 1,100-mile trek down from Bloomington, Illinois, to compete in VP Racing Fuels Xtreme Pro Mod. He certainly was enjoying the more favorable weather, as it was -7 degrees and blowing snow into the car when he loaded the car up for the trip to Bradenton Motorsports Park.

Bo Butner's schedule keeps him pretty busy. So busy, in fact, that his Holley EFI Factory Super Cars Cobra Jet has never been out until now. Making its racing debut with the NMCA, the car features a new Holbrook-built bullet under hood and it ran low eights while lifting in testing a month ago. Even so, he is not too concerned about the chase for the sevens. Our goal is to go A to B and turn win lights on, Butner said.

Crew chief Nick Bacalis took Craig Sullivan's 1970 Dodge Daytona Superbird down to the chassis and reconfigured it to run in VP Racing Fuels Xtreme Pro Mod this weekend from the drastically different setup it ran at Lights Out X. More impressive yet, he did so in just five days.

Another Ford Performance Cobra Jet to watch in the Holley EFI Factory Super Cars class is Ray Skillman's brand-new ride. Only the second 50th Anniversary Cobra Jet to come off the assembly line at Watson Racing, it was still receiving a few finishing touches in the pits. Powered by an all-new Holbrook-built 5.2-liter engine topped by the latest Whipple Superchargers Gen 5 3.0-liter blower, this beauty still needs some shaking down, but it should run quick after the team sorts out the gearing, suspension, and weight placement. Skillman will likely only make eighth-mile test hits today to ensure the tune is on-point before running all-out.

You gotta love seeing the kids getting involved at the track. Young Slade Novak (left) was on the case helping Emilee Novak with the maintenance on Shane Novak's VP Racing Fuels Xtreme Pro Mod 1969 Chevrolet Camaro competitor. The car tested in Orlando with mixed results, so the team is hopeful it will perform this weekend.

The track is definitely working on the first day of the 17th Annual NMCA Muscle Car Mayhem. We have already seen a few crazy wheelstands, including the one that shocked driver Jim Frees. With a new ATI torque converter in the trans and a sticky track underneath, his Quick Fuel Technology Notalgia Super Stock racer lifted the front end like never before. Where Frees 1963 Plymouth would once lift the wheels about a foot, he ended up shifting near the 60-foot marker with the front end flying high and managed to set it down pretty smoothly, as he did not panic and slam on the brakes.

Defending Holley EFI Factory Super Cars Champion, Geoff Turk wasn't quite ready to unleash his 50th Anniversary Cobra Jet, the X-15, at the season opener, but the first member of the Holley EFI 7-second club is on hand in Florida to support his Tasca teammates on their 7-second quest.

Don Baskin (at right) returns to NMCA competition in 2019 after a brief medical hiatus sidelined him. The Baskin Truck Sales magnate will contest both ARP Nitrous Pro Street with his BES Racing Engines big-blockChevy-equipped, Fifth-Gen Camaro, and FST Carburetors NA 10.5 in his GTO. While the Goat suffered a minor setback when its new bullet decided to check out, the Camaro is running strong even after sitting for over a year.

Johnny Calvert will take the reins of his father John's Cobra Jet clone this weekend in Holley EFI Factory Super Cars as they try out the new 2019 Cobra Jet engine combination. The Calvert's colt is just one of many Cobra Jets here that are running the new spec engine combination.

Mark Ruset of Estero, Florida, is running with the NMCA for the first time. Ruset, and his crew chief/wife Carly, will be competing in the Coan Engineering Stock/ Super Stock Combo class, and while he hasn't driven his 1968 Camaro RS in over a year, Ruset's looking forward to getting back into the driver's seat and turning a tire. The 327-powered F-body has gone as quick as 11.40, and after a mild front suspension rebuild, it is running just as good as always, which will be good as Ruset knocks off the ring rust and hopefully races to the Aerospace Components Winner's Circle.