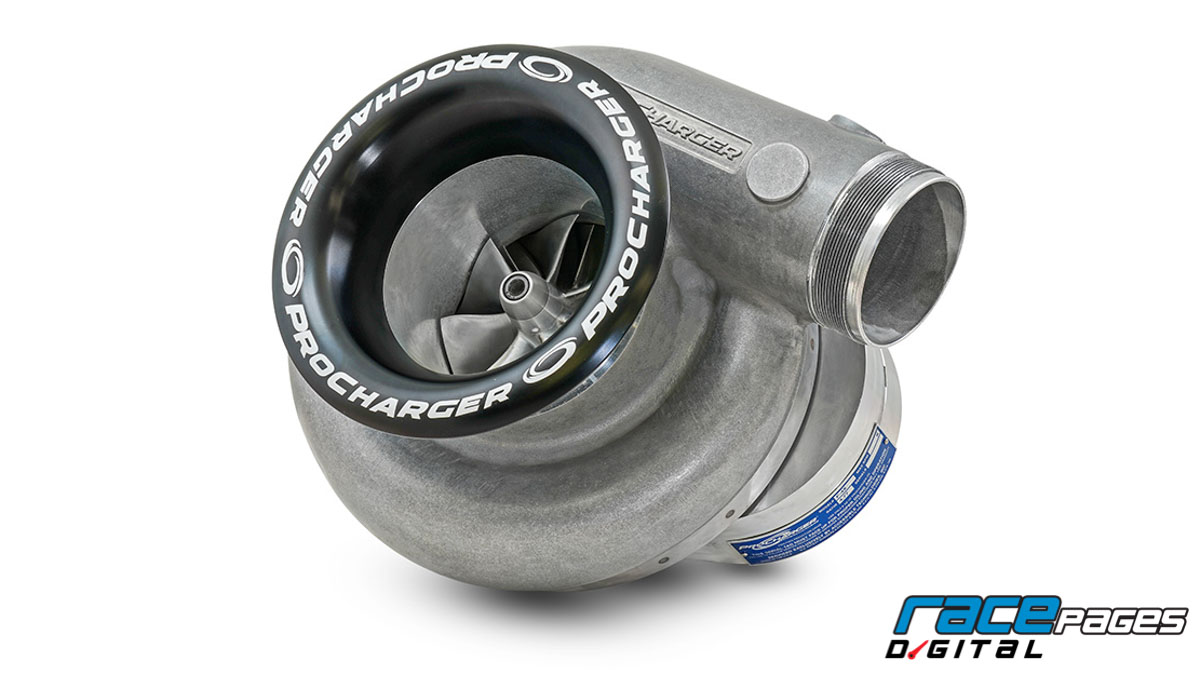 By Steve Turner Photography courtesy of ProCharger and by the FSC staff Centrifugal superchargers cut their automotive gear teeth on the streets and quickly moved to the racetrack under the hood of street/strip machines. As those hybrid hot rods began to run quicker and transition into full-time race cars, the centrifugals evolved with them to push the envelope of door-car acceleration. These days that evolution continues. Today centrifugal blowers build big boost across all levels of street machines and all out racers. They even help propel some of the quickest VP Racing Lubricants Xtreme Pro Mod missiles to insanely quick elapsed times, rampant round wins, and hard-earned championships. We saw where classes like Radial vs. the World, Pro Mod, No Prep and Pro Boost were heading, and knew that these guys were begging for a 3,500-plus-horsepower centrifugal that would be as reliable as it gets, Erik Radzins, Director Of Communications and Calibrations at ProCharger, said. To help sustain that level of performance, ProCharger utilized a multi-pronged development arc to develop its 4,000-horsepower-capable F-4X gearcase, and the new 3,500-plus-horsepower-capable F-4X-140. Over the course of decades, the F3 gearbox has beyond proven itself at the race track. Going from 2,000 to 2,500, to even 3,000 horsepower and beyond that gearbox has served thousands of customers well. It will keep living on for years, and the F-3X allowed us to take the maximum power level to approximately 3,500 horsepower two years ago. However, racers keep wanting more, so to get well above 3,500 horsepower, that's when it was time to start fresh. Thankfully the engineers at ProCharger were given a 100-percent clean sheet to start from, Radzins said. Really the only stipulation was that it had to mount into the existing CrankDrive and mate to the X compressor housing and impellers. So with that level of creative freedom, the engineers really got to work their magic to pull all the levers when it comes to internal gearbox design, he added. Big gears, big shafts, amazing bearings, specific tooth designs, even the way the blower is assembled is specific to this big power unit. This all resulted in a gear case featuring helical gears for smooth operation and reduced harmonics, that also reduces loads and increases stability at elevated power levels. Taking the proven 5.47-inch inlet, 7.22-inch outlet, impeller design, and volute design from the race-proven F-3X-140, ProCharger opted to create a completely new geartrain for the higher performing unit. That meant carving out smooth-running, larger helical gears; developing new ratios, and encasing the whole operation in a robust billet cases in front and back. I really can't go into details as to the materials used. However I can say that it's amazing that we live in a time when you can pull tech in from other industries that are totally cutting-edge, and proven in the harshest environments, Radzins said of the bearings at the heart of the gearbox. Combine that with the 25-plus years of building the biggest and fastest superchargers on the planet, well you end up with a gearbox that lives up to the F4 name. After all, we are in Kansas City and talking about tornadoes, right Upon creating the fresh design, ProCharger put the F-4X to the test on the flow bench, on the dynamometer, and at the racetrack. The company enlisted, among others, Pro Mod heavyweights like Jason Lee/Eric Gustafson, Jose Gonzalez, Alex Laughlin, and Khalid Al Balooshi, to test units in the field. These racers enjoyed success across a number of events and sanctioning bodies and proved that the latest centrifugal was a worthy addition to these successful programs. Let me make this simple this blower benefits from data, data, and more data. Without that, it's just being blindfolded and throwing darts at a wall and hoping you hit the target. Working with amazing teams with an open-door policy on data and full access to the engines and the cars, is what made the F-4X what it is today, Radzins added. It really is a full team effort, and I am not just talking about inside the walls of the office. I am sure I speak for all of the engineers that it's an honor to be working so closely with virtually all of the top engine builders and teams on the planet. The truth is that this wasn't overnight. This wasn't weeks or months of effort. This was a multi-year project and all hands on deck from our engineering staff, engine builders, racing teams and even drivers, Radzins added. We had countless hours in the simulations, the lab, the dyno and the track before releasing it to the teams heading up the first events for competition. I am beyond excited that all those hours of testing, paid off, as the F-4X has come out swinging, making it possible for the drivers to set records, win races and even already an entire championship. It's here to stay after all, it had to, as the F3 left some big shoes to fill. For those so inclined, the F-4X-140 started shipping in late April, and if your race program craves even more output, the F-4X-142 model should be available soon. The latter is capable of delivering an additional 200 horsepower, and even larger models will be available in the future. SOURCE ProCharger (913) 338-2886 ProCharger.com
F-4X
,
NMCA Edelbrock Xtreme Street
,
ProCharger
,
Supercharger