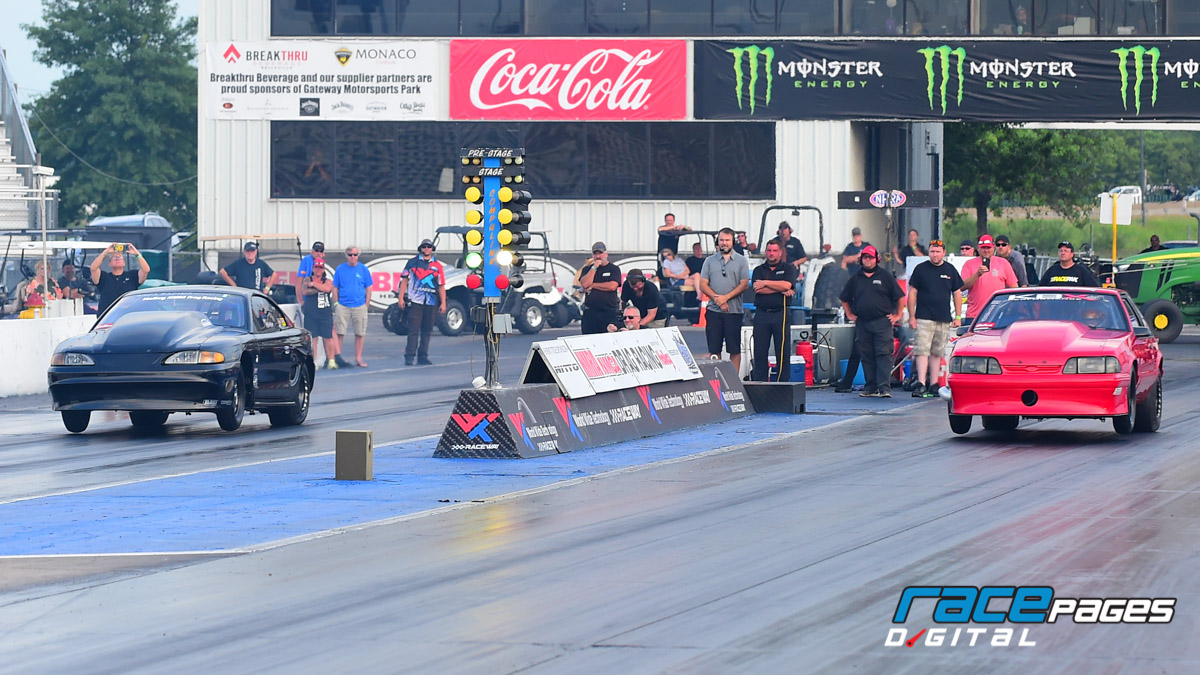 For the last fifteen years, the Holley NMRA Drag Racing Series and NMCA Drag Racing Series have run together in an event called the Nitto Tire NMRA/NMCA Super Bowl of Street Legal Drag Racing presented by HPJ Performance. Just as the two series met up earlier in the season in Commerce, Georgia, they come together later in the year, but the Super Bowl features a special shootout to determine series superiority. Both series run independently throughout the weekend, and then on Sunday, the series winners race each other to determine who wins the Super Bowl shootout. It's a rivalry that puts Team NMRA against Team NMCA with cash bonuses and Nitto Tire Diamond Tree championship rings hanging in the balance. The race was previously held at Rt. 66 Raceway in Joliet, Illinois, but for 2020, it was moved to another famed racetrack, World Wide Technology Raceway at Gateway. The track's racing roots go back to the 1960s and during the late 1990s and early 2000s, it played host to the World Ford Challenge Races. Later on, it hosted the NMCA and in 2020, NMRA and NMCA racers arrived at Madison, Illinois, just outside of St. Louis and within sight of the city's famous arch to battle for precious championship points, and a shot at Super Bowl of Street-Legal Drag Racing glory.

Going into this year's contest, the NMRA was ahead on wins overall at 10-4, with the series having won the event for the last few years in a row. The first pairing on Sunday evening was Randy Thomas, overall winner of the QA1 True Street class in his Supercharged Shelby GT500, and Cody Poston, who was the highest finishing NMCA TorqStorm Superchargers True Street racer in his 5th-Gen Camaro. The NMCA quickly chalked up a win when Thomas went red off the tree.

Next, it was FSC Ford Muscle winner Clyde Dunphy and his classic Mustang vs Detroit Truetrac Nostalgia Muscle winner Brenda Blair in her box Chevy Caprice. While NMRA and NMCA racers and fans enjoyed the event safely while social distancing, red lights seemed to be spreading as Dunphy caught the red bulb, too, giving the NMCA a 2-0 lead.

In the third Super Bowl pairing, it was the ever competitive Exedy Racing Clutch Modular Muscle's Jason Henson in his new-edge Mustang against the Quick Fuel Technology Nostalgia Super Stock's Kevin Miller in his classic '65 Dodge Coronet. Henson took the advantage at the tree and Miller broke out, giving the NMRA it's first victory of the 2020 Super Bowl. Then, it was time for the NMRA's ARP Open Comp winner, Dennis Corn and his stick-shift Ford Thunderbird, to face off against the NMCA's MagnaFuel Open Comp winner, Cameron Bowles and his Ford Maverick. The competitors' dial-ins were just a tenth of a second off of each other, but it was Bowles who was now down with the sickness, going -.021 red and giving the NMRA its third victory.

With the score at NMRA 3, NMCA 2, it was up to the Holley EFI Factory Super Cars winner Tripp Carter and his Cobra Jet Mustang to even the score up. He faced Detroit Locker Truck & Lightning winner Bob Dill in his turbocharged SVT Lightning. While Carter became the points leader in his class after this event with two wins to his name, it was Dill who was quicker on the tree and drove to the stripe first, which sealed the win for team NMRA.

Next, it was the big-tire, ARP Nitrous Pro Street Olds Cutlass of Tony Gillig going up against the small-tire, boosted SN95 Mustang of Bill Putnam. While Putnam has been on a tear in the JDM Engineering Limited Street class, Gillig has a long history of winning in the NMRA and NMCA across a number of classes, and his Cutlass is dialed in like the 90s Pro Stock machine it mimics. When the lights came down, Gillig welded Putnam to the Christmas tree with a .054 reaction time to Putnam's .226. He then drove to a 4.37, and the Super Bowl round win and a second celebration in the Aerospace Components Winner's Circle this win brought the tally to NMCA 3, NMRA 4.

Normally, the NMCA's VP Racing Lubricants Xtreme Pro Mod winner races against the NMRA's VP Madditives Street Outlaw winner, but neither the Pro Mod winner, Jim Widener, nor the runner up, Eric Gustafson, could make the lane call as they both had an explosive final round. An interesting side note is that Widener is partners with BES Racing Engines' Tony Bischoff on the racing team, and Bischoff won at the very first Super Bowl event in 2006. Filling in for the NMCA Pro Mod category was Mickey Thompson Street Outlaw racer Steve Cagle and his Chevy Nova, who went up against Dom DiDonato and his S197 Mustang. With both cars dialed in a 4.32, they left the starting line at the same time, but DiDonato sped to the win, 4.40 to 4.81.

To win the Nitto Tire NMRA/NMCA Super Bowl of Street-Legal Drag Racing presented by HPJ Performance, the NMCA would need to win the last two rounds, and racing next was the combined class of NMRA Edelbrock Renegade and NMCA Edelbrock Xtreme Street. Both series were represented by late-model Mustangs, with the NMCA's Tim Knieriem behind the wheel of Daryl Reynolds' nitrous-injected pony and the NMRA's Joel Greathouse, who is a long-time NMCA racer but has his sights set on an NMRA title this year in his turbocharged Fox-Body Mustang. At the start of their race, their lights were close, and the finish was even closer, with the margin of victory just .032 of a second and the win going to Greathouse.

His win sealed the victory for NMRA, and had it gone the other way, team NMCA would have taken the Super Bowl as the last pairing added another win in the NMCA's column. G-Force Racing Transmissions Coyote Stock racer Frank Paultanis, who was the first in the class to clock a 9-second run at Bradenton Motorsports Park earlier this year, faced the winner of the Chevrolet Performance Stock presented by Scoggin-Dickey Parts Center, Jeff Heintz in his 4th-Gen Camaro. This last paring is also the tie breaker should the count be 5-5 leading up to it. And it was Heintz' better job off the lights that got him to the finish line first for the final win for the NMCA.

The final score was 7-4 in favor of the NMRA, which still holds command of the 15-year-old series matchup at 11 wins to 4. The competitors put on a great show and the winning NMRA racers will receive their Nitto Diamond Tree Super Bowl rings to commemorate their achievement.
HPJ Performance
,
Nitto Tire NMRA/NMCA Super Bowl of Street Legal Drag Racing
,
World Wide Technology Raceway at Gateway