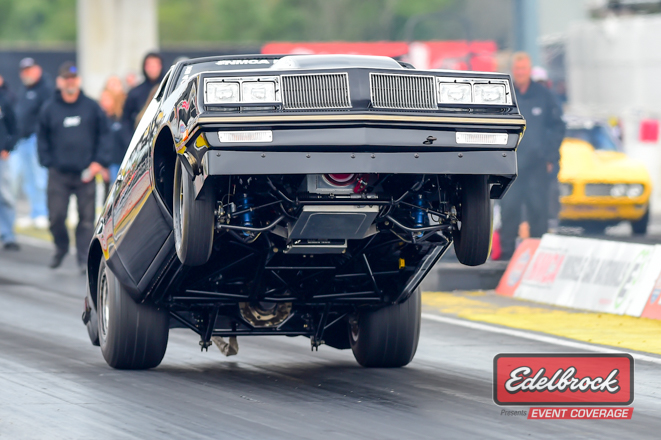 As the final day of the 17th Annual NMCA World Street Finals presented by Chevrolet Performance at Lucas Oil Raceway in Indiana, and the final race of the season, the action will be amplified and championships will be cemented across the categories with each round of eliminations. We wish all of our competitors well, and we'll be following along and posting news and results throughout the day. 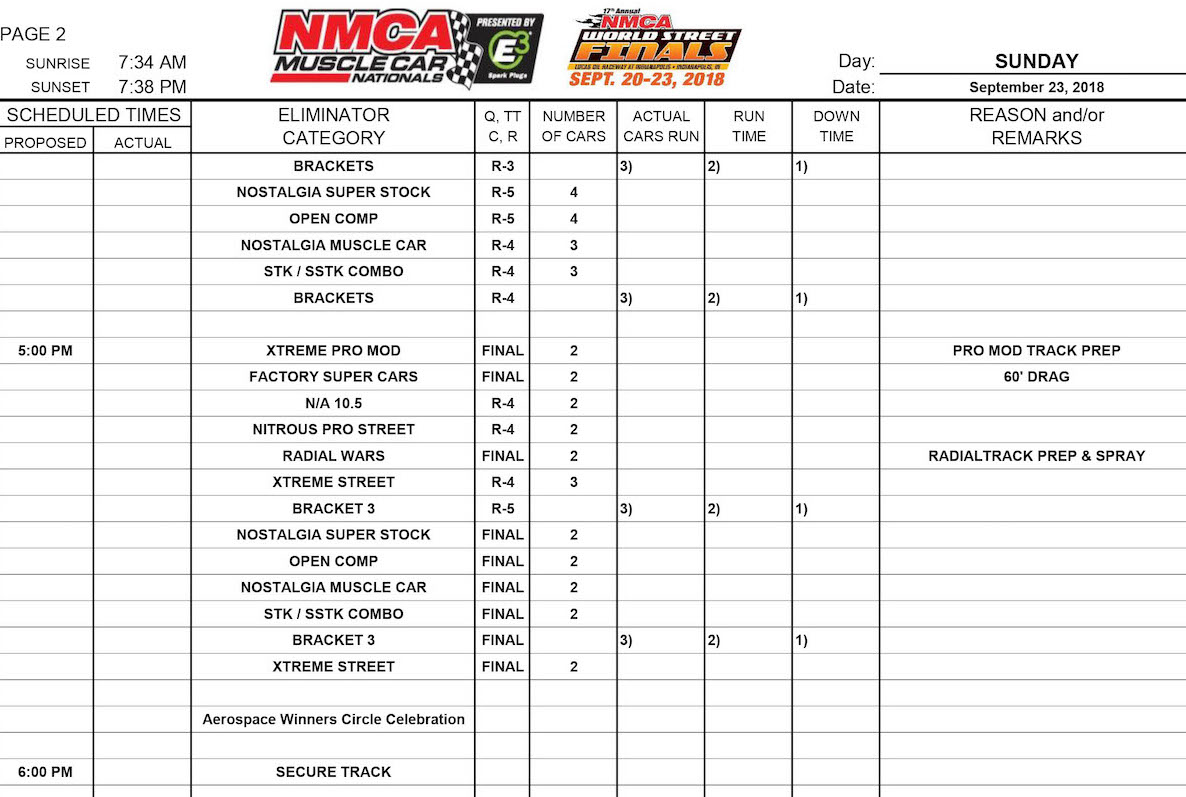 With qualifying in the books, we've rolled into racing. 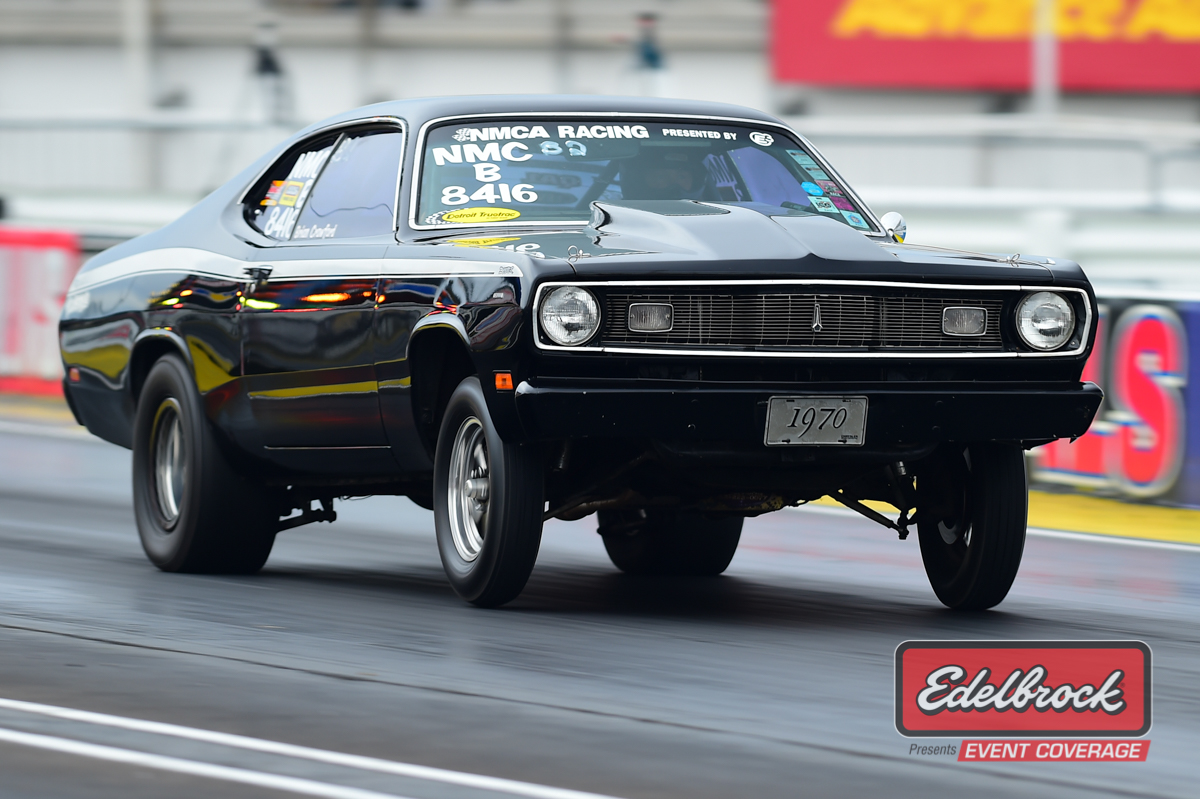 When Brian Crawford was offered the opportunity to drive Jerry Miles' 1970 Duster in Detroit TrueTrac Nostalgia Muscle Car competition this year, he accepted, was all-in and has been leaning a lot about the car and what it likes one lap at a time. He has also been loving every minute of it. The car has under its hood a 416 cubic-inch Mopar built by Miles, and it helped carry Crawford to a runner-up finish at the race in Illinois in July and a fourth place standing in points coming into this race. Now, Crawford, who qualified in the second spot with a 10.253 on his 10.25 index, is focused on going rounds today to finish even higher in points. "I've made all of the races, and it's been awesome," said Crawford. "I'm having fun, but at the same time, I'm here to try to win this thing this weekend. I want to have a strong finish in points." [gallery size="large" ids="10684,10683,10685"] One of ATI Nostalgia Super Stock driver Jim Johnson's favorite memories is of helping his dad work on his 1965 Plymouth Satellite when he was a child, and after his dad died, he found himself wanting a comparable car that would help him keep his memories alive. So, he purchased a 1965 Belvedere, and has been racing it ever since. The car is powered by a 540 cubic-inch Hemi topped with Edelbrock heads, and E85 flows through two 850cfm Quick Fuel Technology carburetors. Johnson has been running in the 10.00 index, but plans to coax a little more power out of his combination and move to the 9.75 index next year. "I run E85 because I feel it helps the car make more horsepower, make more torque and run cooler," said Johnson, who has previously raced everything from a street car to a Top Dragster, and they've always been powered by a Mopar engine. Johnson's 3680-pound car is backed by American Ethanol and Carbon Green BioEnergy. 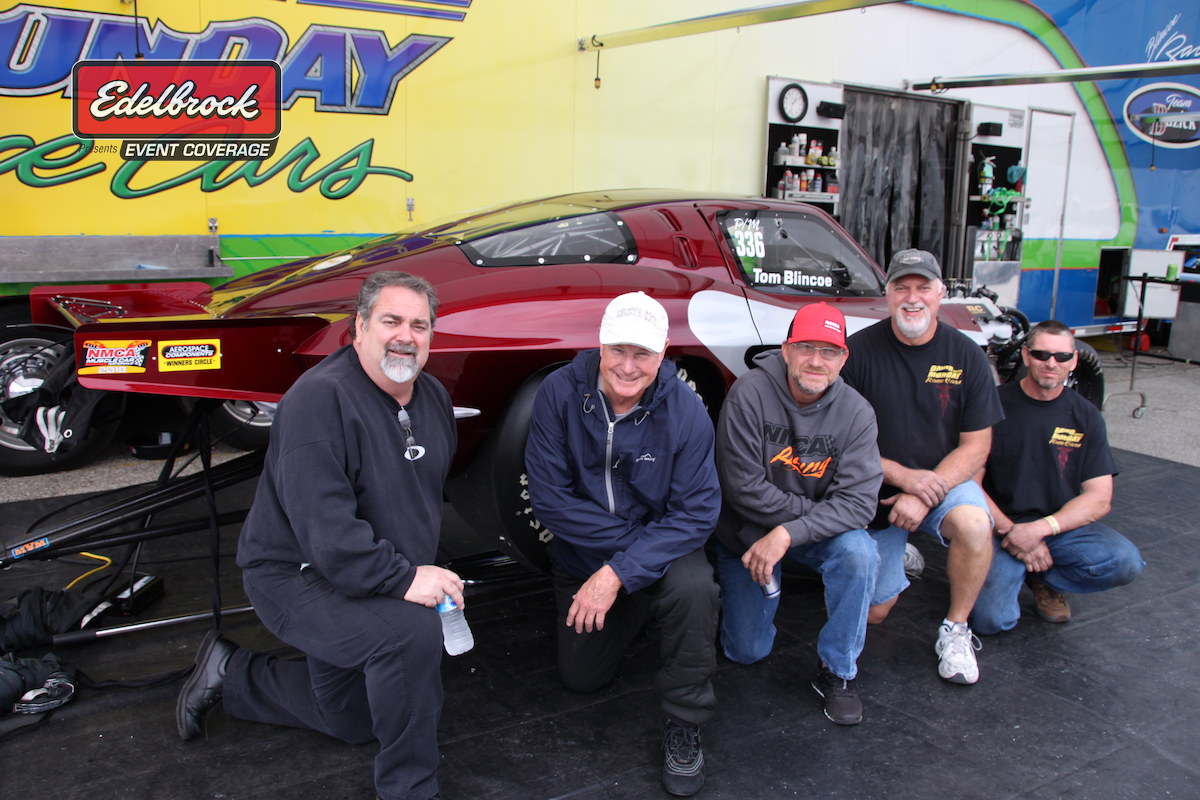 Soon after making his NMCA VP Racing Fuels Xtreme Pro Mod debut at the race in Atlanta in April, Tom Blincoe headed to a Mid-West Pro Mod race, where he impacted the wall at 205 mph in his 1963 Corvette. He turned it over to its builder, David Monday Race Cars, to be put back together, and within 30 days, he was at the 17th Annual NMCA Quick Fuel Technology Bluegrass Nationals at Beech Bend Raceway in Kentucky, and he hasn't looked back since. The car is powered by a 598 cubic-inch Hemi engine pumped up by a ProCharger, and Patrick Barnhill and Jason Lee of PTP Racing tune it up. This weekend, Blincoe drove it to a 3.81 and 198 mph to qualify in the eighth spot and to achieve a personal best, and moments ago, he won first round of eliminations with a 4.05 after he and his opponent, Shane Novak, had to pedal to settle their cars at the hit. "We're making good progress," said Blincoe. "Now, we're going to start picking it up and going faster." 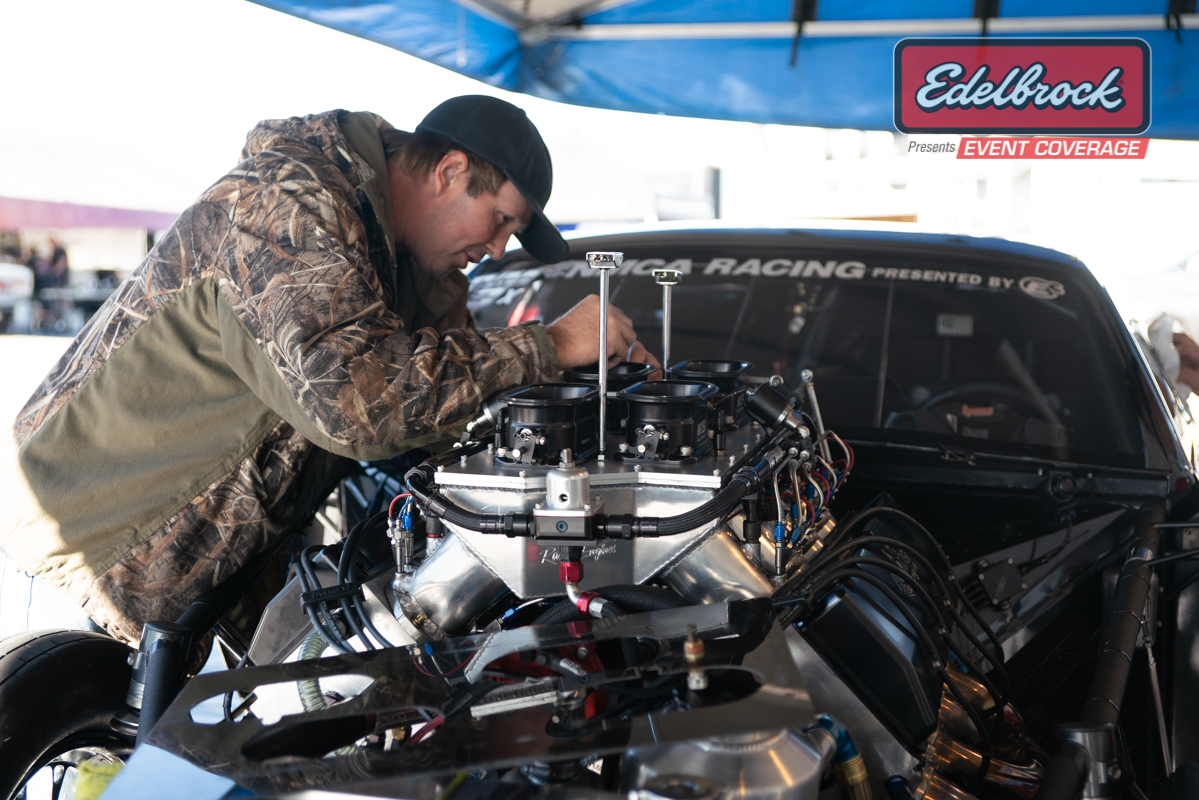 Co-crew chief for Mike Bankston's racing team Randy Auwarter spent a considerable amount of time working on their new Nitrous Pro Street entry as the car's nitrous system didn't want to work on track, despite operating properly when test in the pits. He was also busy replacing throttle position sensors on the team's Xtreme Pro Mod driven by Kyle Megginson. While the Pro Mod's issues were fixed for the first round, Megginson had to pedal it to keep it off the wall in the first round, unfortunately handing the win to Craig Sullivan. 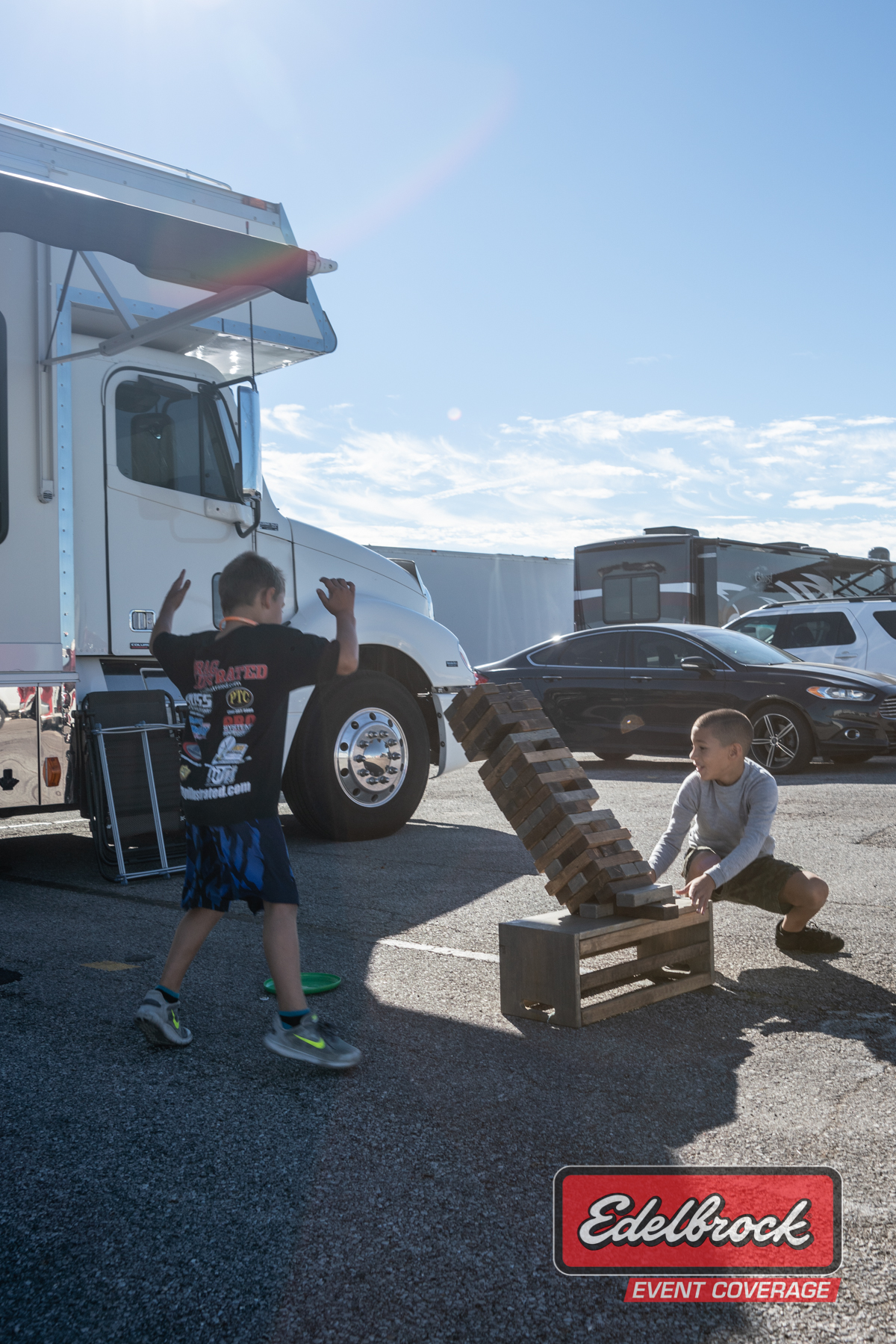 Drag racing is a balancing act of sorts, getting the right combination of power, traction, and reaction to come together. These guys in Shane Novak's pit were getting some early morning practice via homemade Jenga. 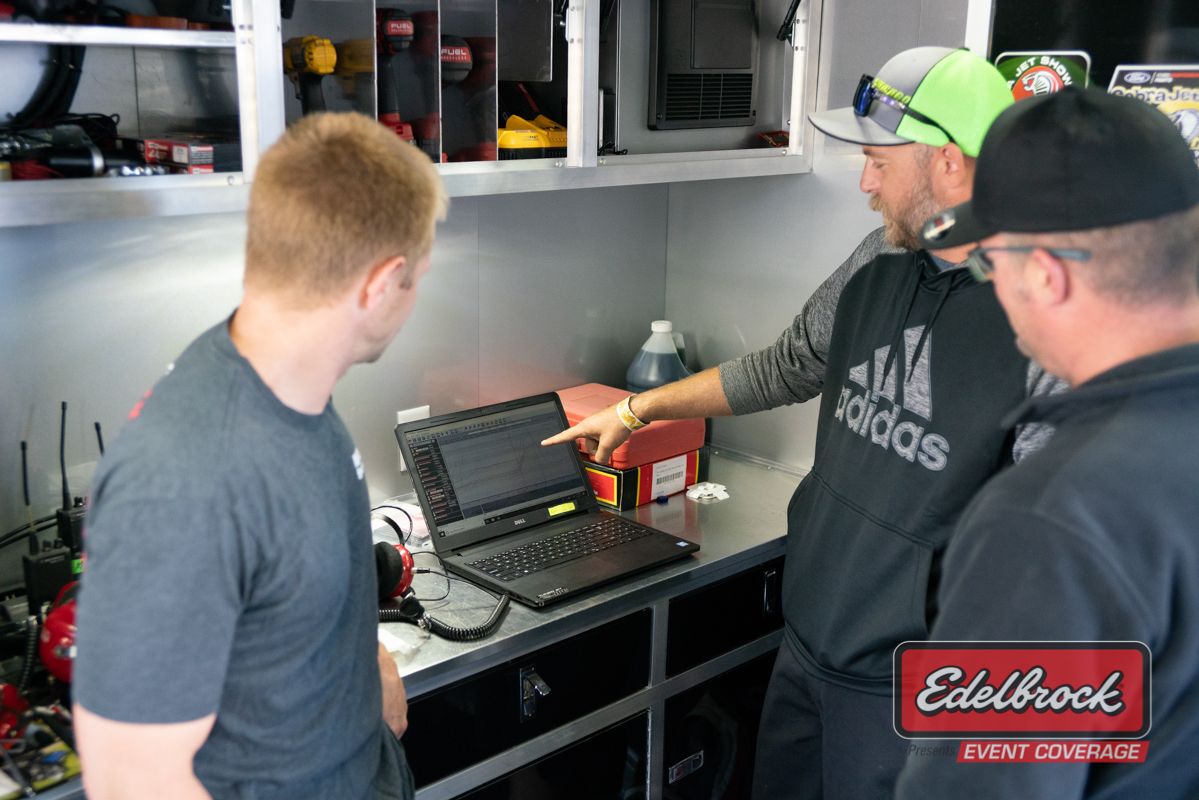 Jason Dietsch (at right) recently converted his Holley EFI Factory Super Cars Cobra Jet to Holley EFI, and he's tasked Eric Holliday of JPC Racing to get the CJ running and racing. They've closed in on the tune and are only about a tenth of a second of the car's past performance. 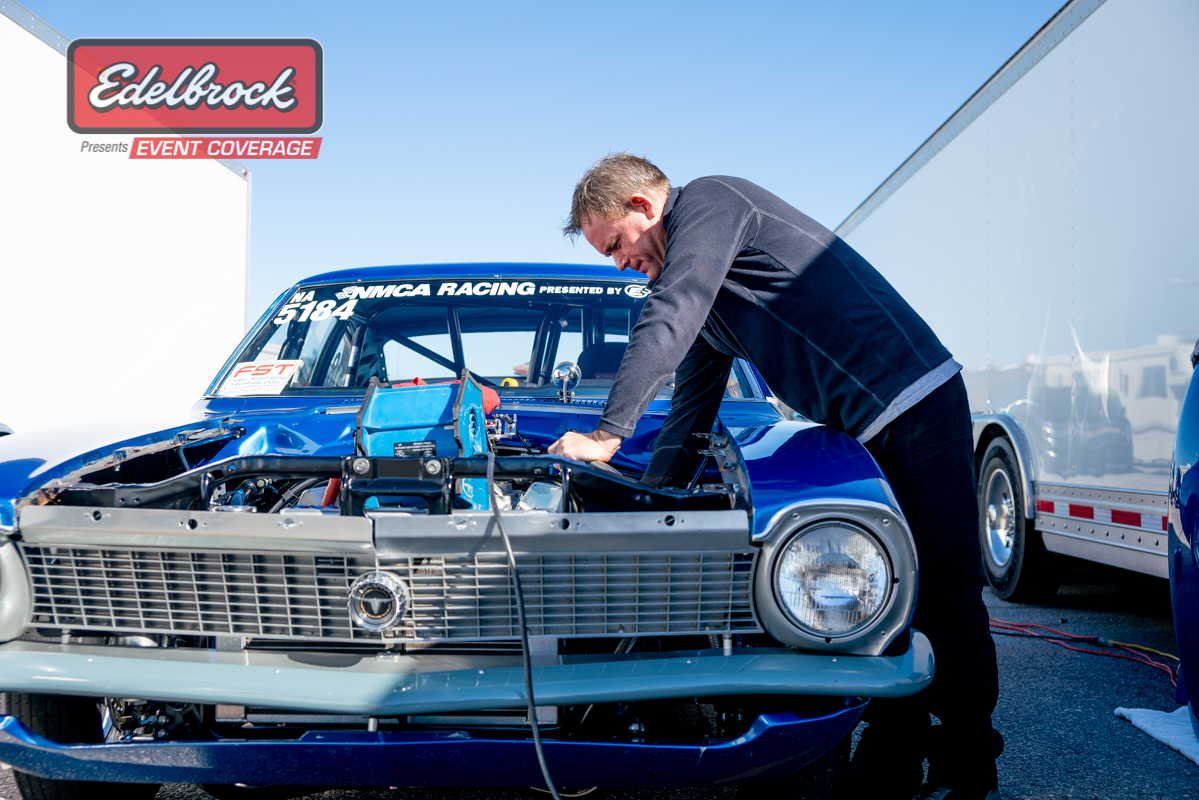 Fuel Systems Technology NA 10.5 racer Craig Hejda got hooked on the NMCA's naturally aspirated class this year, but his home-built small-block Ford has been about half a second off the pace. That will change next year as Hejda will be working with Chris Uratchko who built NA 10.5 champion David Theisen's engine on a new Ford powerplant for the 2019 season. 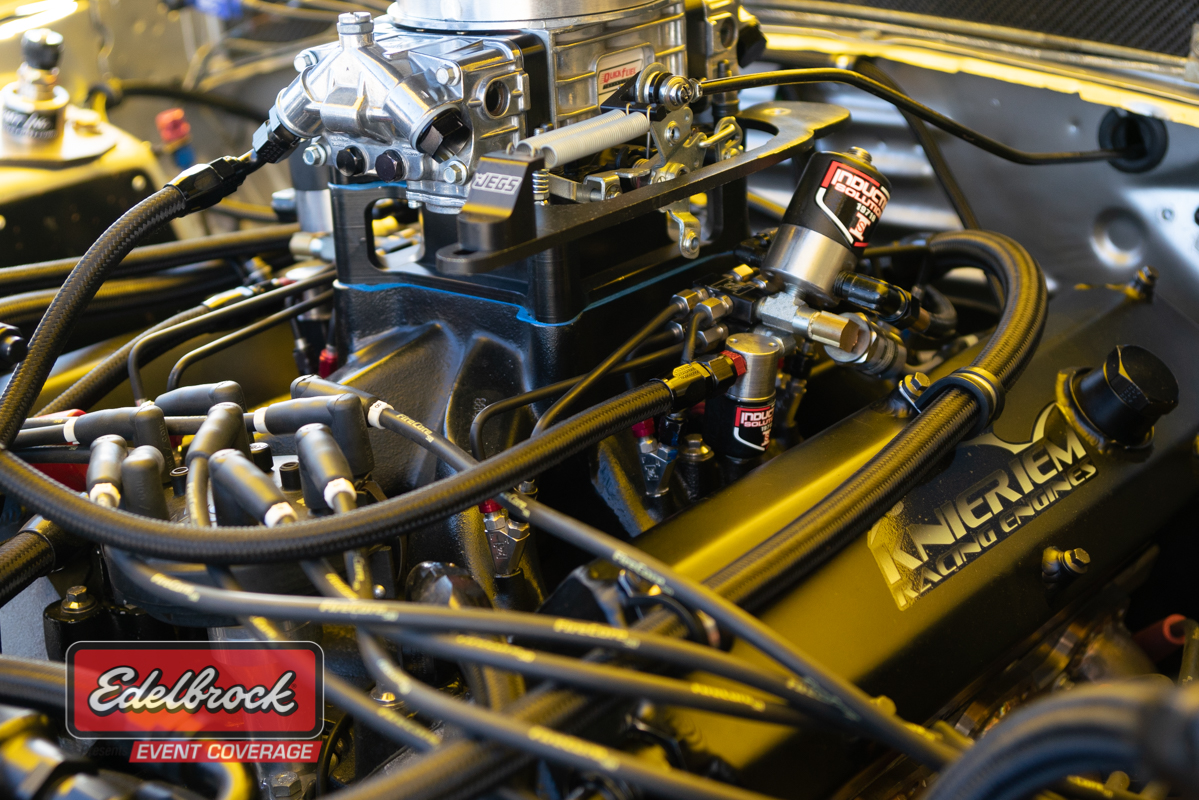 Steve Dowell of Mt. Washington, Kentucky joined the Edelbrock Xtreme Street ranks this year along with his friend and engine builder, Tim Knieriem. Dowell purchased his 86 Mustang GT five years ago and has dabbled in Ultra Street and no prep races, and has since gotten hooked on the NMCA class. With an Induction Solutions nitrous oxide fogger on top of his 380ci, 8.2-deck height small-block Ford, The Ford Truck plant employee claims it is the quickest 8.2-deck SBF on the sauce.

After dealing with some health issues earlier this year, Scotty Guiler is back making waves with his Olds Cutlass. He had quite an exciting run yesterday, nearly putting the G-body on the bumper (see photo at top of post), but managed to tame it down today as he advanced in round one. 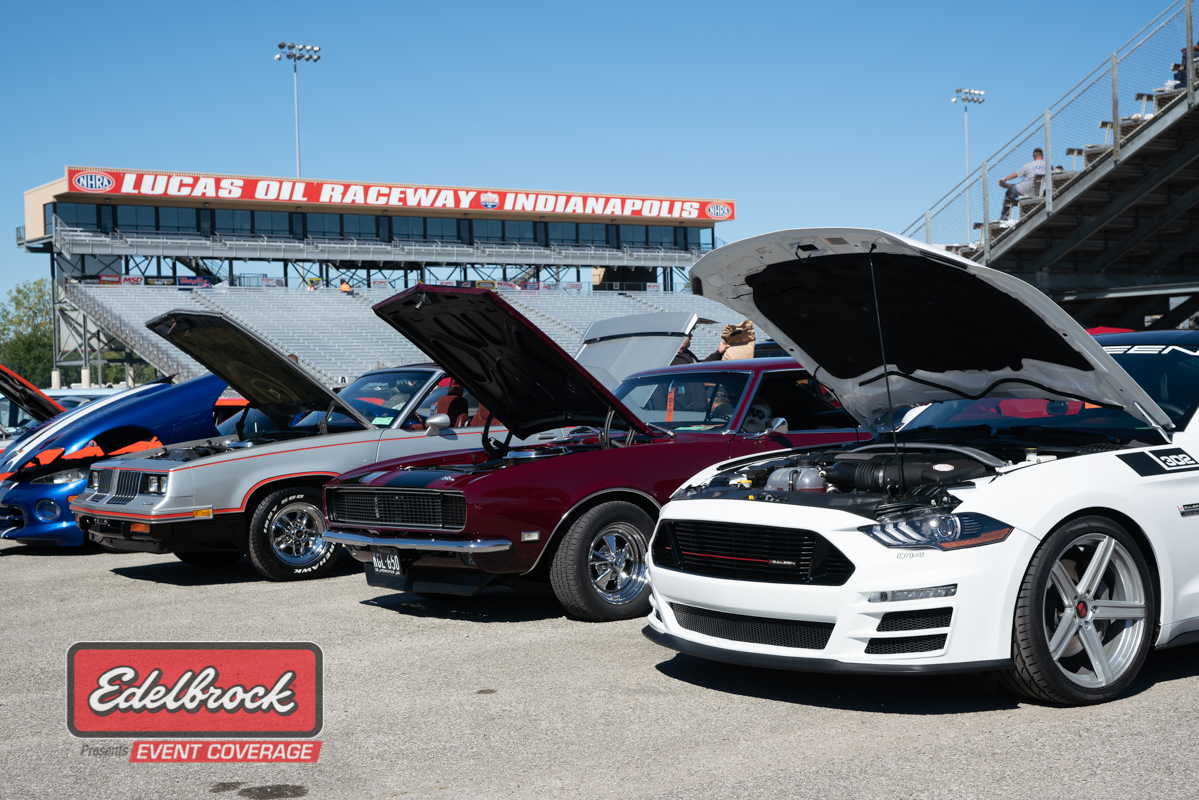 The UPR Products Car Show is once again in full effect, and one of the great things you'll find at an NMCA race and car show is the diversity of vehicle makes and models. 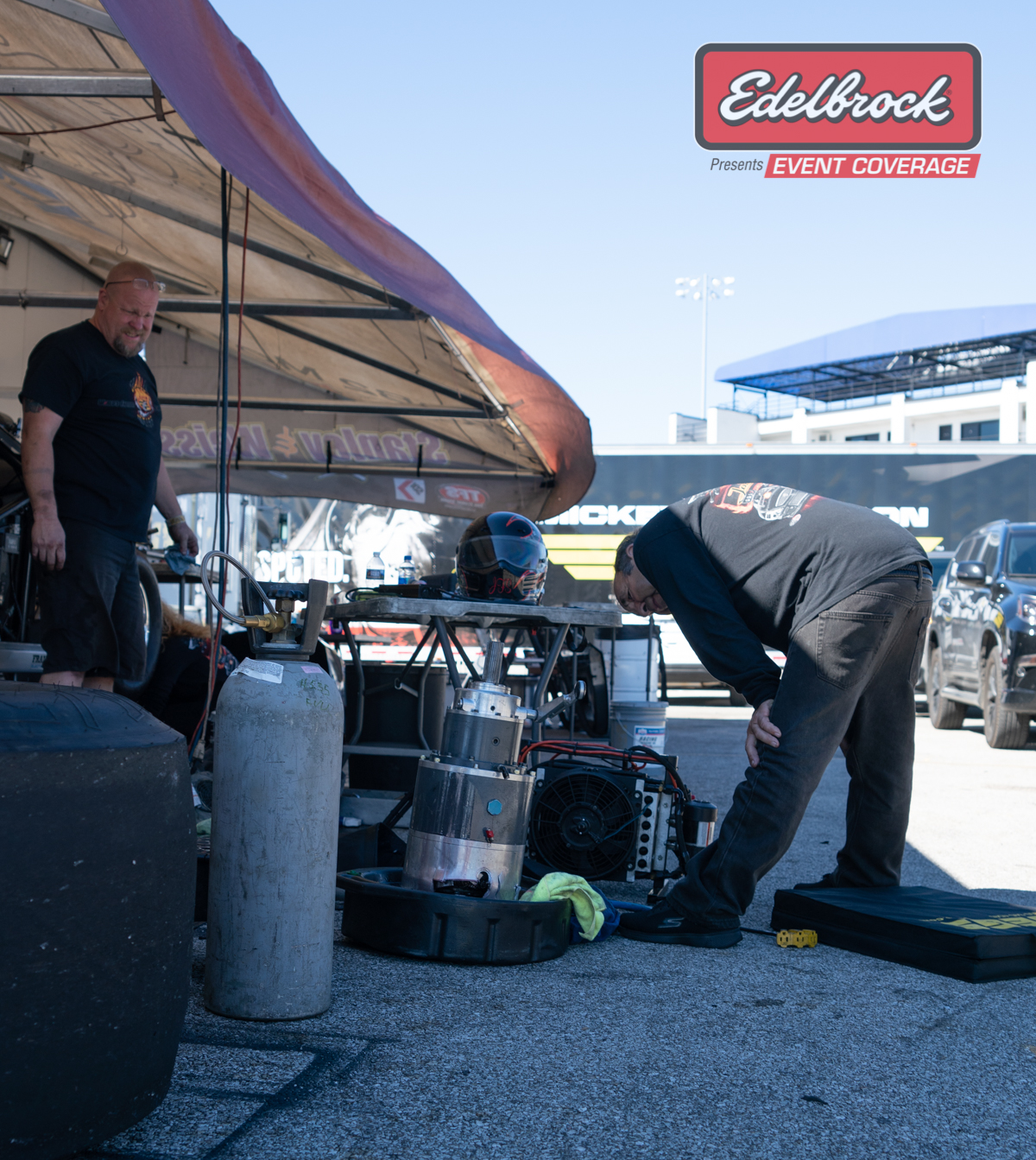 John Stanley had quite the nasty surprise during round one of VP Racing Fuels Xtreme Pro Mod when his transmission chucked a gear through the case 3.6-seconds into his run. As a whole lot of luck would have it, the gear flew right across Stanley, exited through the front window, and Stanley won the round. 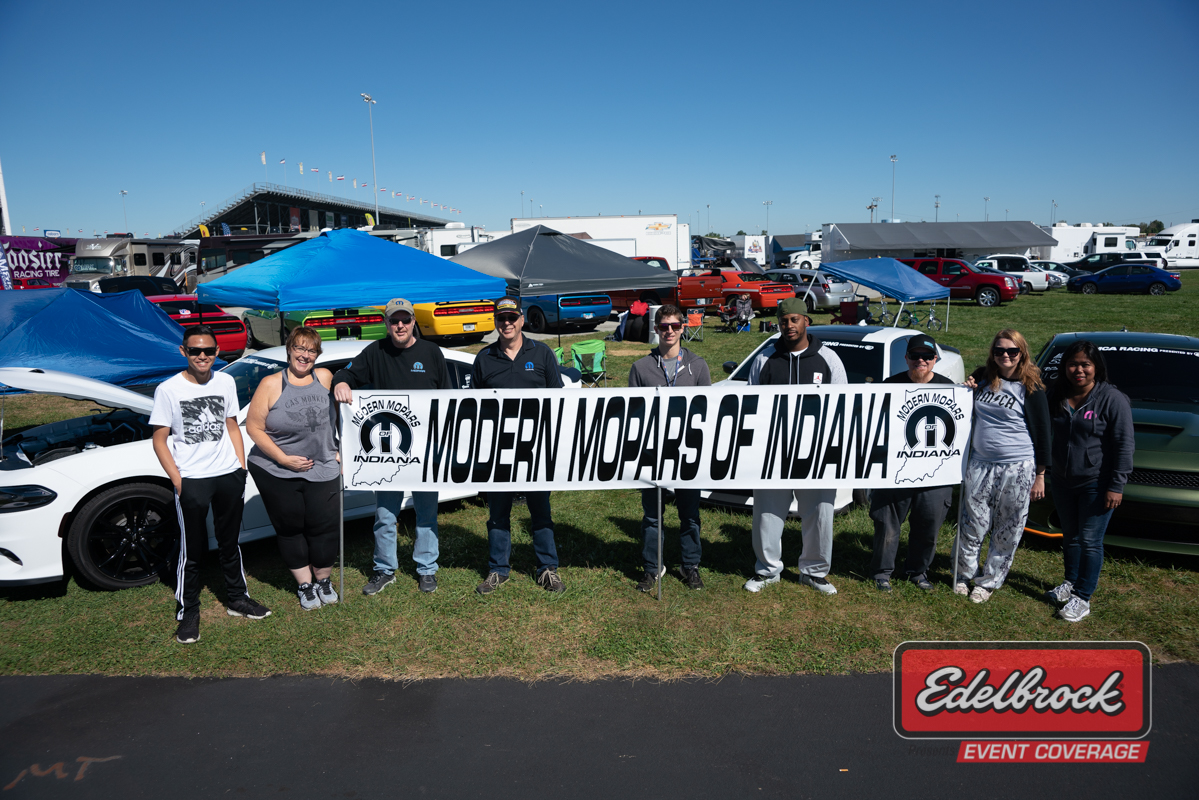 Modern Mopars of Indiana embraced the Dodge//Mopar Hemi Shootout here at Lucas Oil Raceway Indianapolis and swarmed the track with dozens of its members who participated in both the shootout and Gear Vendors True Street. Fresh off of running a personal best of 4.29 and 165 mph last weekend at Shakedown at the Summit at Summit Motorsports Park in Ohio, Nicole Priola Rees came to this weekend's race looking to back it up, or go even quicker in Mickey Thompson Radial Wars, but she was blocked by a bit of trouble. She was forced to lift to a 5.24 in qualifying, and then she, her husband and fellow racer, Mikey Rees, and crew, discovered a bent axle flange under their Camaro powered by a 400 cubic-inch small-block Chevy and a ProCharger F-1X-12. With help from fellow racers Shawn Ayers, who gave them a spare, James Lawrence, who let them use his hydraulic press and Mark Woodruff, who helped however he could until they were done at 2 a.m., she was able to make the call to the lanes for the first round of eliminations today. There, however, she spun and lost to Enzo Pecchini, but she has already turned her focus to her next race. 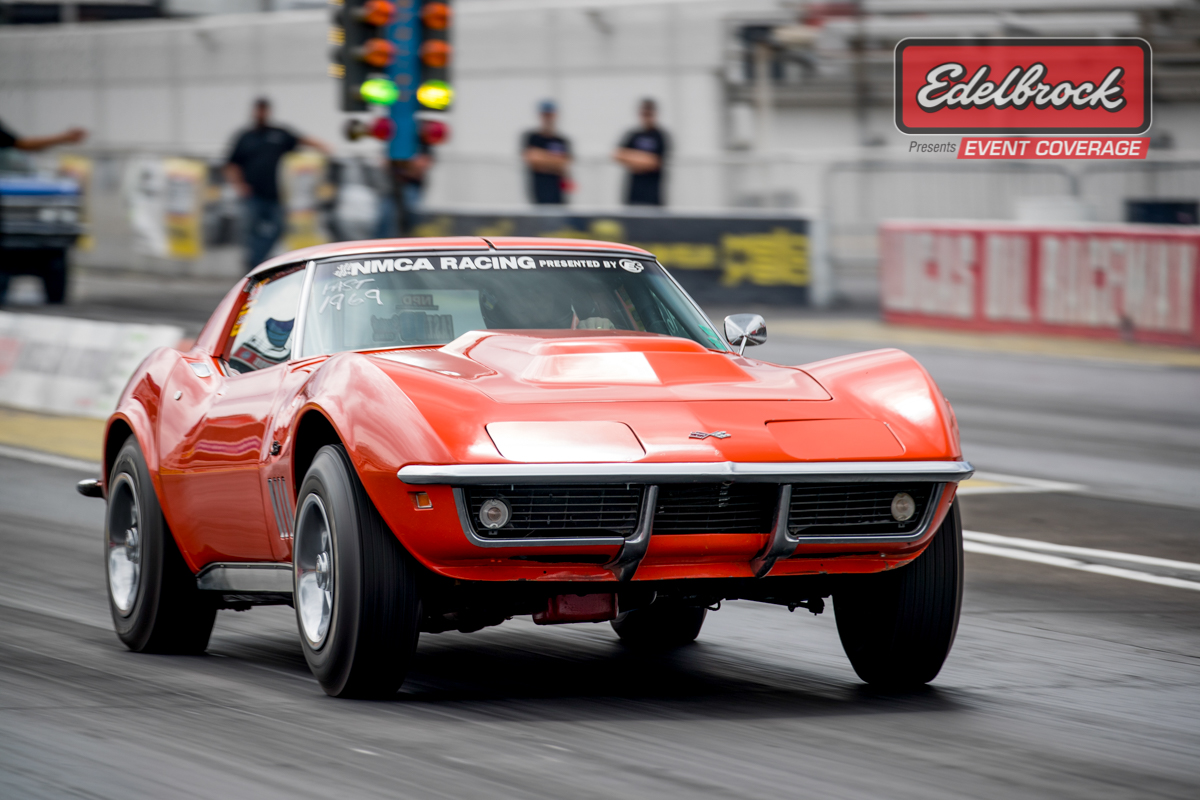 The NMCA started off the 2018 season with a bang, as the event played host to the first-ever, 7-second run in Holley EFI Factory Super Cars, and today, we have bookended the year with another record. While it was not an NMCA class that saw the record reset, it was the Baskin Truck Sales Factory Appearing Stock Tire class, which was featured during the NMCA finals. The record, set by Lane Carey many years ago in his 428 Cobra Jet-powered Mach 1 Mustang, has stood until today when Terry Pennington, who after clicking off numerous runs in the high 9-second zone in his L88-powered Corvette, logged a 9.840 run to claim the record for himself. 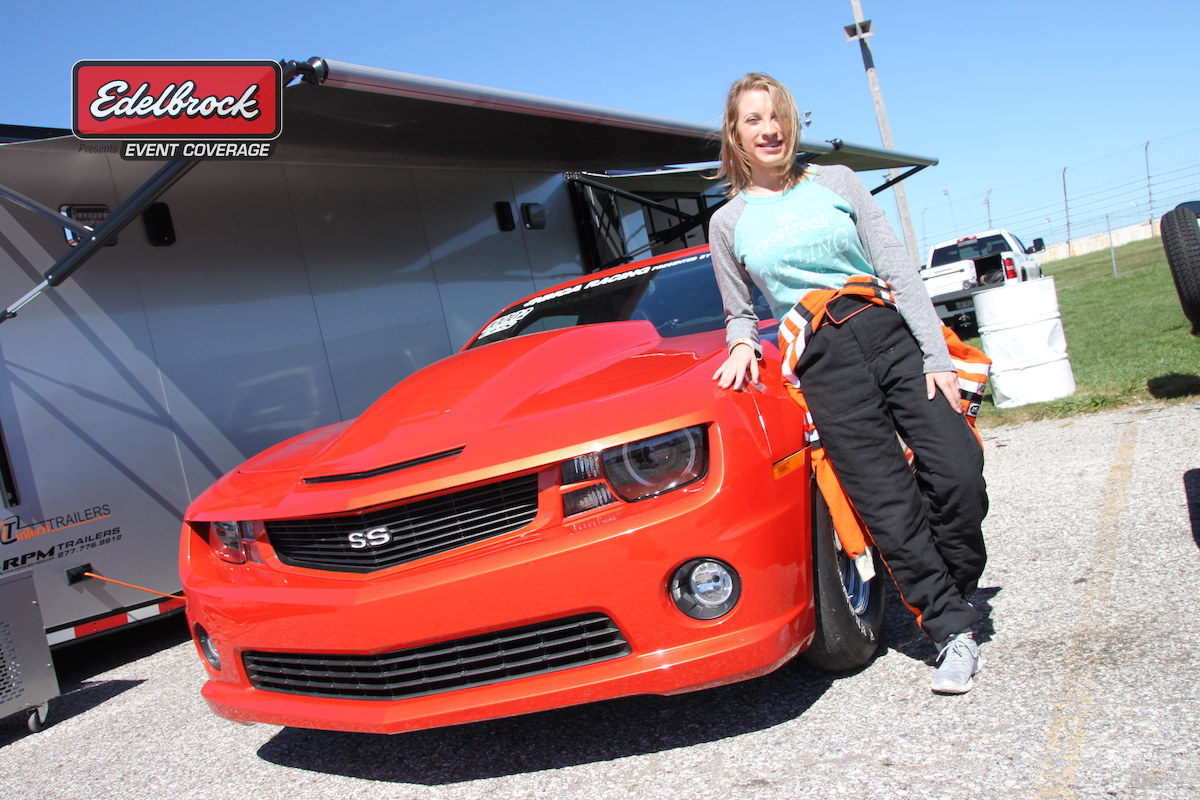 Chevrolet Performance Stock presented by Scoggin-Dickey Parts Center racer Haley Rounsavall has earned a runner-up finish at all but one race this year, and she's on the hunt for a win at this weekend's race. She's off to a good start, as she set the pace in qualifying with a 10.19, won the first round of eliminations with a 10.27 and has a bye-run into the final.It felt really good to get the number one qualifier at this race, and now we're swinging for everything in the final, said Rounsavall, who is marrying her fiancee, Matthew Burkhammer, in four weeks, and was sure to schedule the wedding around racing and Arkansas Razorbacks games. For True Street, Hemi Shootout, Chevrolet Performance Street Car Challenge, and elimination'results as we receive them, click HERE