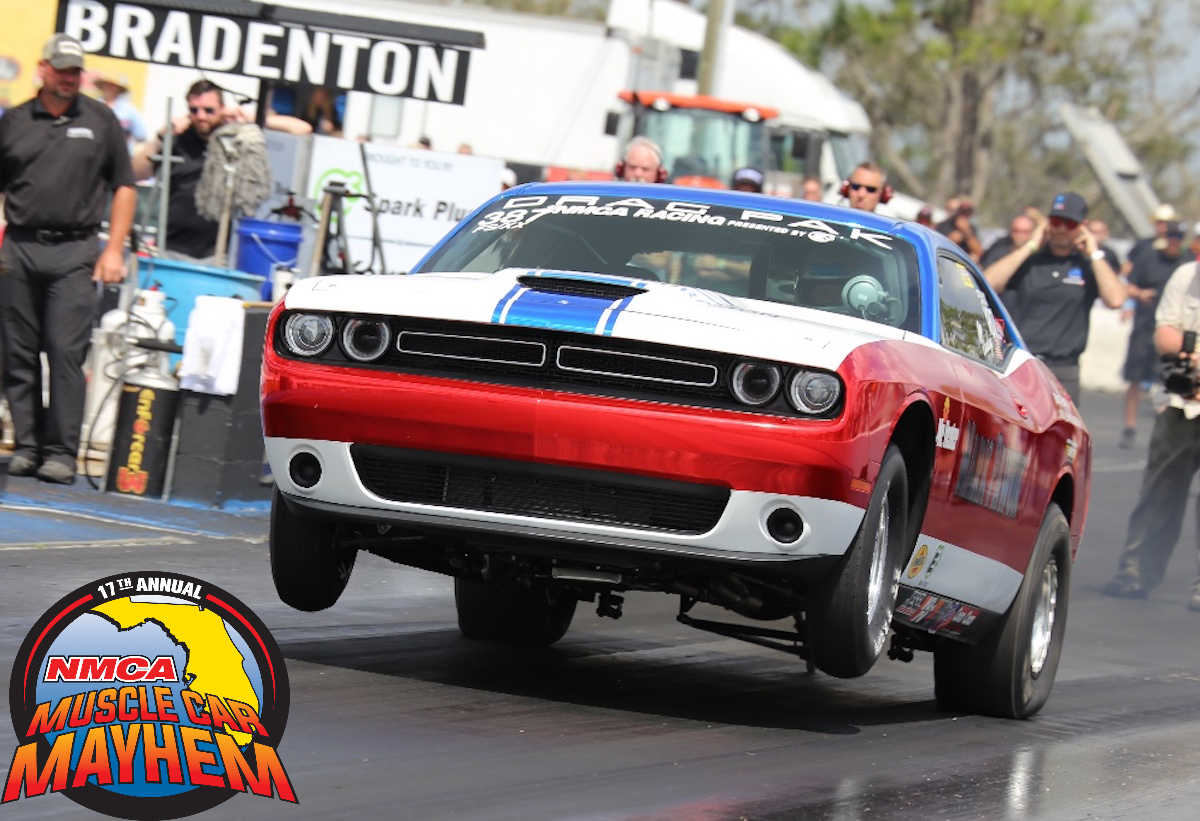 Things get real today at the 17th Annual NMCA Muscle Car Mayhem held at Bradenton Motorsports Park. Qualifying closed out last night, and today racers either advance or go home. Those who survive the rounds will celebrate in the Aerospace Components Winner's Circle and take home some fat contingency checks. And, while the Dodge // Mopar HEMI Shootout wrapped last night, the quickest modern HEMI-powered racers are set to face off today in the Arrington Performance HEMI Quick 8 Presented by Red Line Oil.

Here is how the action will unfold today during today's eliminations at the 17th Annual NMCA Muscle Car Mayhem.

Unfortunately, Shawn Ayers and the Fletcher Cox Racing team suffered a parts failure that prevented the Goldust Mustang from ascending to the qualifying ranks into eliminations, but we have no doubt the car will be back with a vengeance at the at the 11th Annual Scoggin-Dickey Parts Center NMRA/NMCA All-Star Nationals Presented by MAHLE Motorsport, where team owner Fletcher Cox promises to reset the record in the Mickey Thompson Street Outlaw class.

The mighty Minion returned to Bradenton Motorsports Park, after running in a whopping four classes during the 25th Annual Nitto Tire Spring Break Shootout last weekend. After a crazy number of laps, Yandro Ulloa's clutch basically fell apart, and he swapped in a new one in time to return to Gear Vendors True Street competition this weekend. Given that the new clutch wasn't quite broken in yet, Ulloa still managed mid-8-second runs to take top honors in the class courtesy of an 8.61 average.

Kevin White roared into MagnaFuel Open Comp competition with a new engine under the hood of his 1972 Chevy Nova. That powerplant is a BES-constructed, 574-cube bullet that was generated 1,150 horsepower at 7,500 rpm. After tuner Chris Spall worked through a few quirks, the car turned into a steady 8.8-second performer. Backed by Aerospace Components, White is ready to go consistent rounds and was confident he could make a run toward celebrating with his sponsor in the Aerospace Components Winner's Circle.

If you are going to race, eventually you will break a few parts. Of course, the saying is that one man's trash is another man's treasure, so you have to hand it to this entrepreneurial racer for attempting to sell this decimated driveshaft.

Hot shoe Bill Lee Jr. is pulling double-duty running his law-enforcement-themed Fairmont in the Detroit Truetrac Nostalgia Muscle Muscle, where he qualified in the 11th spot, and the Dodge // Mopar HEMI Shootout, where he took top honors on the merit of a 10.16 average behind the wheel of Steve Best's Dodge Demon. That will put also put Lee in the running for today's Arrington Performance HEMI Quick 8 Presented by Red Line Oil. While racing two classes keeps Lee busy, he travels around in style between rounds in a Cadillac golf cart that is behind the mean Mopar. 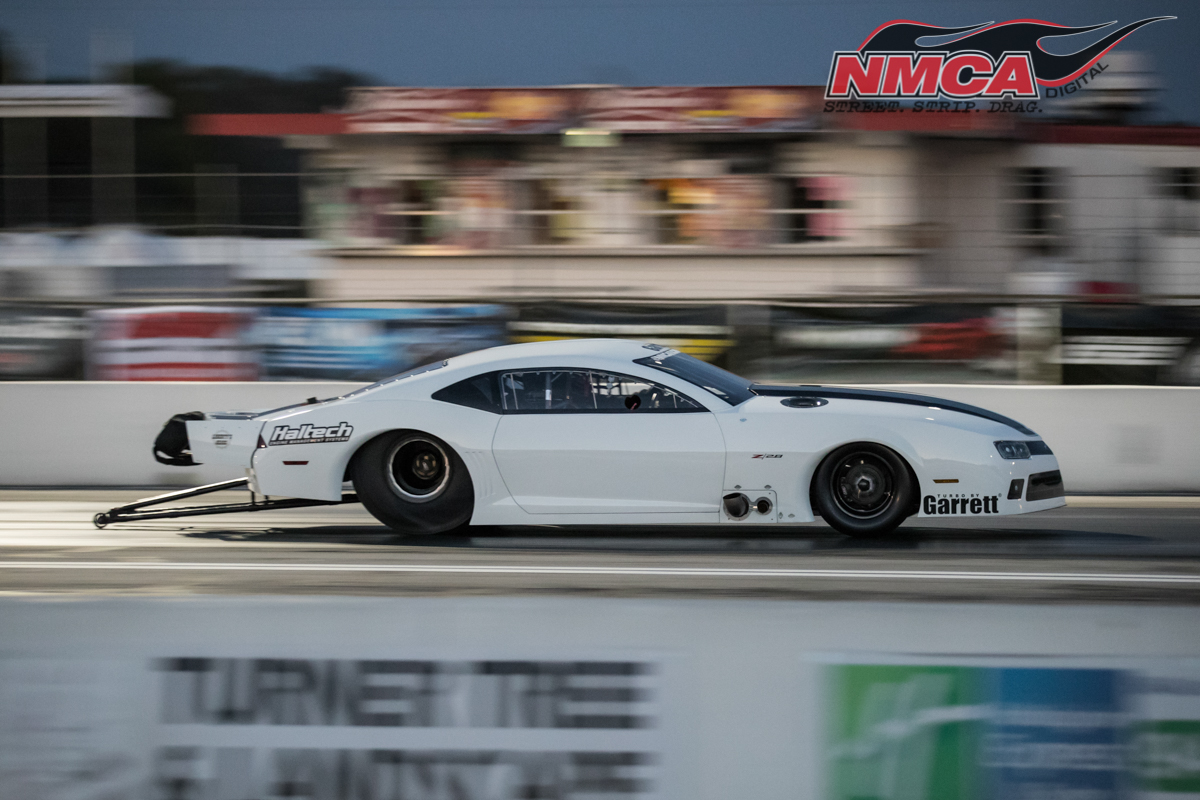 Standout VP Racing Fuels Xtreme Pro Mod driver Steve Summers is flying in his fan-favorite Camaro this weekend, and in the process, he's showcasing the strength of his combination. It consists of a 522 cubic-inch engine paired with a Garrett Gen II 94mm turbo, and Summers, who built the engine a few years ago, made some upgrades to its internals over winter to coax even more power from it. Helping to plant all of that power is his Liberty's five-speed transmission, which recently underwent ratio changes, and a new converter by Mark Micke of M&M Transmission. The car also is outfitted with new adjustable shocks by Adam Lambert of Precision Racing Suspension, and in it, Summers sailed to a 3.76 to qualify in the second spot and is preparing for today's first round of eliminations. We're going to try to go faster now, said Summers, with a sly smile that showed he means business.

Despite arriving on the property with no engine in his Dragzine-backed SN95, James Lawrence qualified as the top dog in Mickey Thompson Street Outlaw. The team chased a lot of little gremlins, but was optimistic riding that 4.38 at 166 mph momentum into eliminations today.

Inspired by a slogan under the hood of General Motors vehicles of the past, Mark Ruset tries to run as many factory parts as possible on his 56,000-mile 1968 Camaro RS Coan Engineering Stock/Super Stock Combo racer. His 327-cube small-block is based on classic 68 parts, which are getting harder to replace as the classic machine ages, but the engine powered him to the 12th qualified spot with an 11.80 on a 12.30 index. It was his first time running with the NMCA, and after enjoying it so much, Ruset is considering a trip to the 11th Annual Scoggin-Dickey Parts Center NMRA/NMCA All-Star Nationals Presented by MAHLE Motorsport next month in Commerce, Georgia. I lost in the first round to good opponent, so I am a little disappointed, but not embarrassed, he told us.

Frank Justin's son Blake rolled into the 17th Annual NMCA Muscle Car Mayhem car show in fine style. The young enthusiast was strapped in a Recaro child seat in the expansive backseat of his dad's clean 1961 Impala. Powered by the original 348 engine, this 71,000-mile cruiser rides on an Accuair air suspension and is packed with 16 hidden speakers powered by four amps.

There was a fair amount of carnage in the Holley EFI Factory Super Cars ranks after qualifying. Bo Butner's Cobra Jet tweaked a rearend and hurt a transmission. His team swapped in a new rear (pictured) and borrowed a transmission from COPO rival Scot Libersher. Meanwhile, the Libersher team had its own woes, swapping out two torque converters and dealing with an engine diaper-filling oil leak courtesy of a loose oil filter. However, all the cars made the call for round one of eliminations. 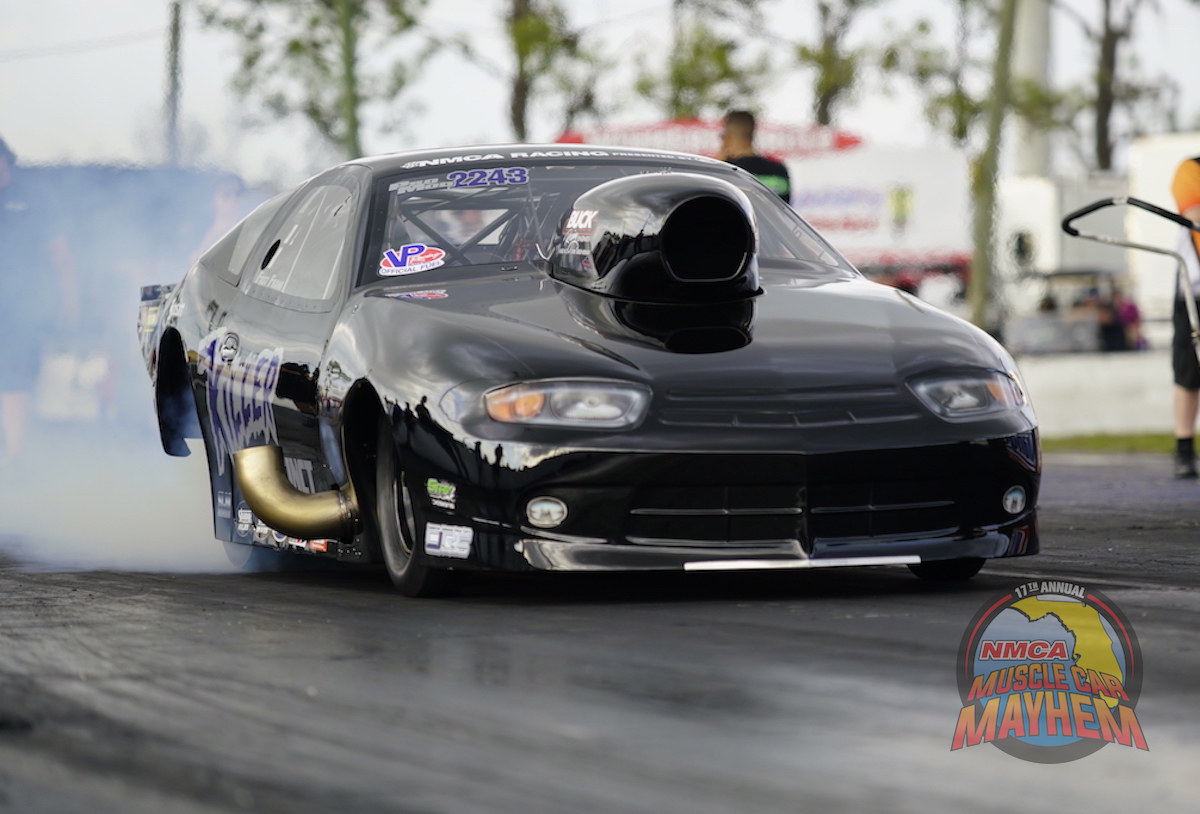 Fast Frank Cersosimo is competing in a new-to-him Cavalier this weekend, and he's quickly dialing in the car built by Jerry Bickel Race Cars and boasting a 959 cubic-inch engine built by Sonny's and enhanced by a SpeedTech nitrous system. After posting 3.80s in testing, the Floridian shook the tires in qualifying but managed a 3.96 to qualify in the fourteenth spot in VP Racing Fuels Xtreme Pro Mod. Now, going into today's first round of eliminations, he hopes to pick up. We know we can run 3.70s, said Cersosimo. We've just got to get it dialed in. 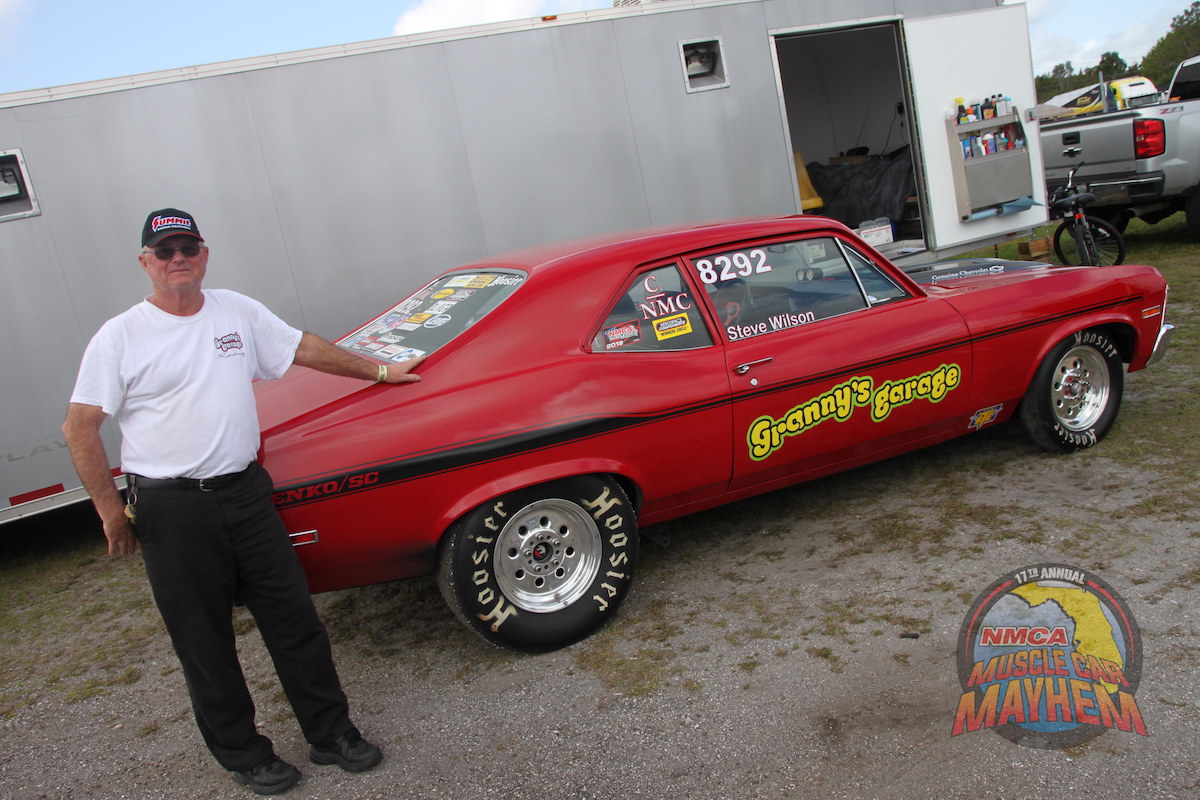 Soon after earning the MagnaFuel Open Comp championship in 2006, Steve Wilson moved to Quick Fuel Technology Nostalgia Super Stock, followed by Detroit Truetrac Nostalgia Muscle Car, and it's a good fit, as he finished in third place in points last year and is focused on finishing in first place in points this year. You meet a lot more people when you run different classes, and I like meeting a lot of people, said Wilson, with a smile. The Tennessee-based driver got past the first round of eliminations in his Granny's Garage Nova powered by a small-block Chevy, and will face reigning class champion Andy Warren and his Caprice in the second round of eliminations today.

Speaking of carnage, number-one qualifier in Holley EFI Factor Super Cars, Drew Skillman hurt his 50th Anniversary Cobra Jet's engine on an eliminations pass, as it cut loose when he shifted to neutral. The team has a spare bullet in the trailer, and they were working feverishly in the pits to swap in the fresh powerplant. 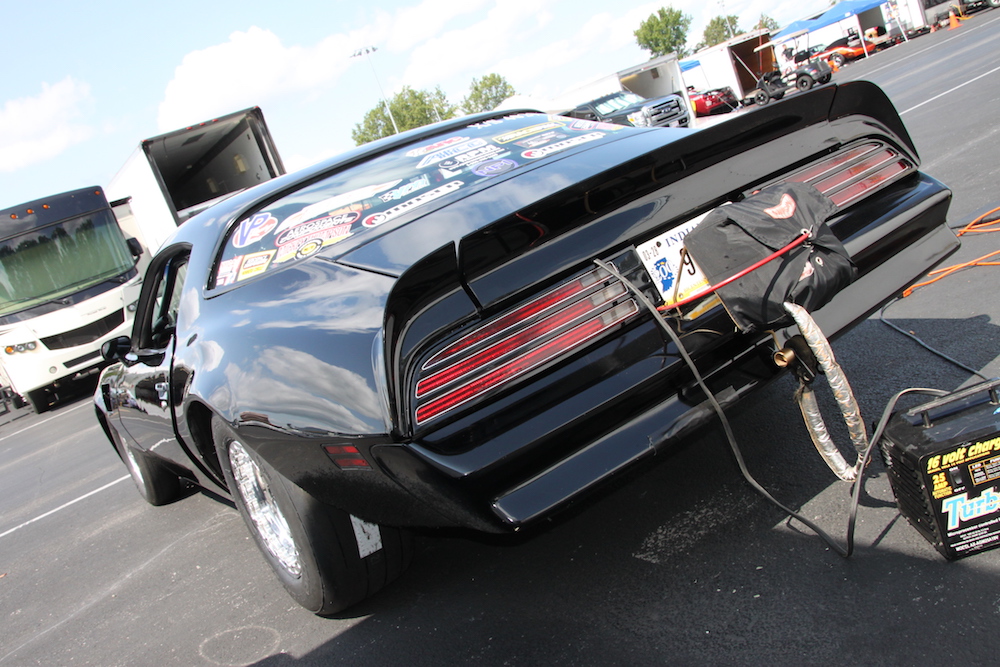 Edelbrock Xtreme Street driver Ray Cox had a handful of steering wheel when his 2002 Trans Am made a move to the left during the final round of qualifying last night. After a few wild spins, the car impacted the wall. Fortunately, Cox exited the car on his own and is not injured. He and his son, Brad Cox, hope to have it repaired in time for the 11th Annual Scoggin Dickey Parts Center NMRA/NMCA All-Star Nationals, April 4-7 at Atlanta Dragway, but if they don't, they'll turn to their tried-and-true 1977 Trans Am for the event.

Following up his success in the Dodge // Mopar HEMI Shootout, Bill Lee Jr. kept his foot to the floor behind the wheel of this 2018 Dodge Demon in the inaugural Arrington Performance HEMI Quick 8 Presented by Red Line Oil. Coming in as the number-one qualifier in the Quick 8 after his shootout victory, Lee Jr. ran a string of low 10s through eliminations before taking the easy win over Gage Burch, who lit the red bulb in the finals. With the win, Lee earned another chance to celebrate in the Aerospace Components Winner's Circle.

You are not seeing things. This boosted pickup is built to drive, well, backward. The engine is in the bed and the driver peers out what would be the rear window to see the road. It might not be practical, but it sure attracted a lot of attention in the 17th Annual NMCA Muscle Car Mayhem car show.

The goal at the beginning of the 17th Annual NMCA Muscle Car Mayhem weekend was celebrating in the Aerospace Components Winner's Circle, and that's just what Leonard Long achieved with his FST Carburetors NA 10.5 victory. Running a string of high sevens to arrive in the final, his 1995 Ford Mustang squared off against John Langer's 1969 Pontiac Trans Am. Long got the jump and never looked back, winning with a 7.89 to Langer's 7.97. For his efforts Long also took home $4,400 in contingency cash. Congratulations to all our class champions, who were able to celebrate with Kim Kussy, President / Chief Marketing & Financial Officer at Aerospace Components, and Steve Wolcott, President & CEO of ProMedia Events & Publishing, this weekend.

Be sure to watch the live feed over on SpeedVideo.com, and keep track of the eliminations results as they happen right HERE.
bradenton
,
Coverage
,
Drag Racing
,
Florida
,
Muscle Car Mayhem
,
nmca
,
Season Opener