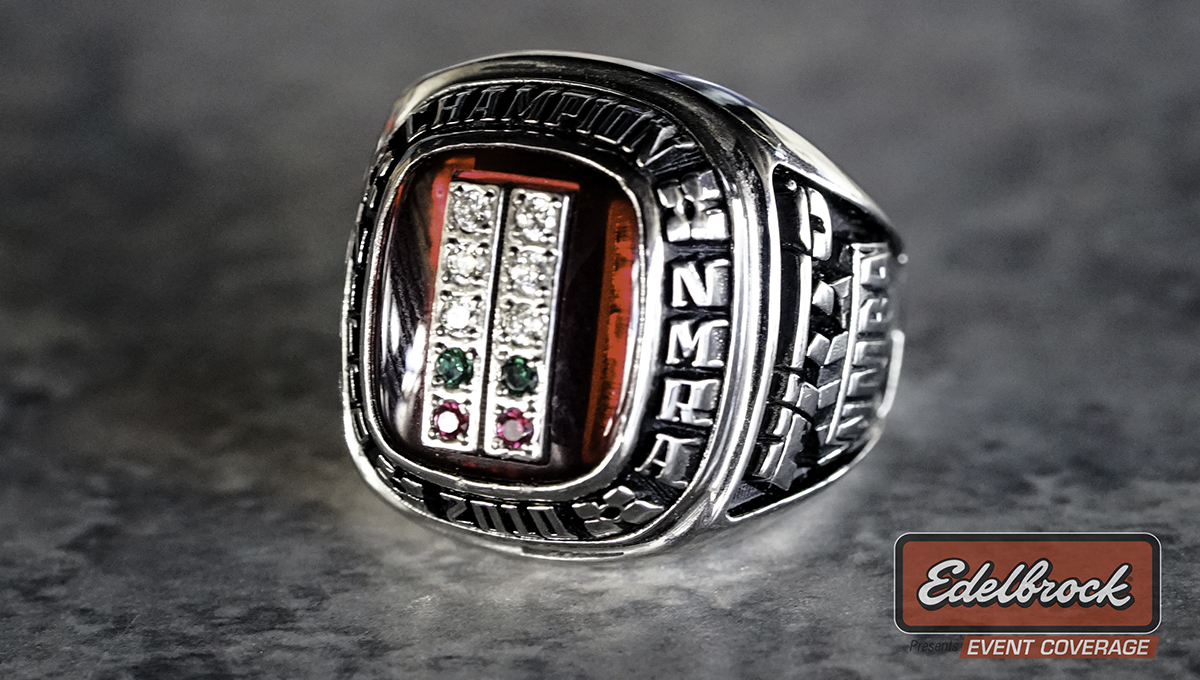 The first rounds of eliminations were every bit as exciting as expected yesterday at the 13th Annual Nitto NMRA/NMCA Super Bowl of Street Legal Drag Racing presented by Fuel Systems Technology at Route 66 Raceway, and the action will escalate today. When it's all said and done, winners will form Team NMCA and Team NMRA and run off for a chance to win the specially-designed and super-dapper Nitto Diamond Tree Rings. 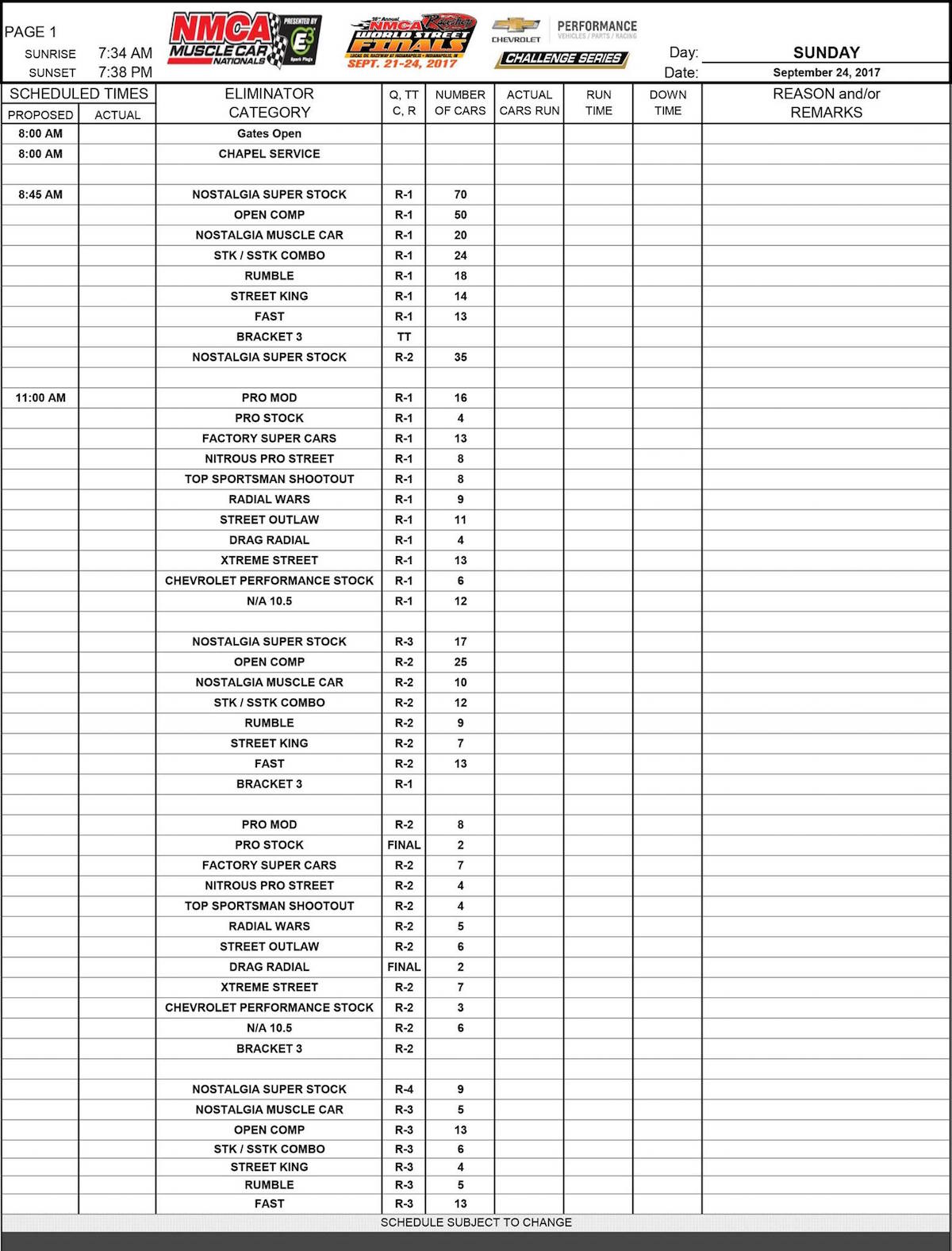 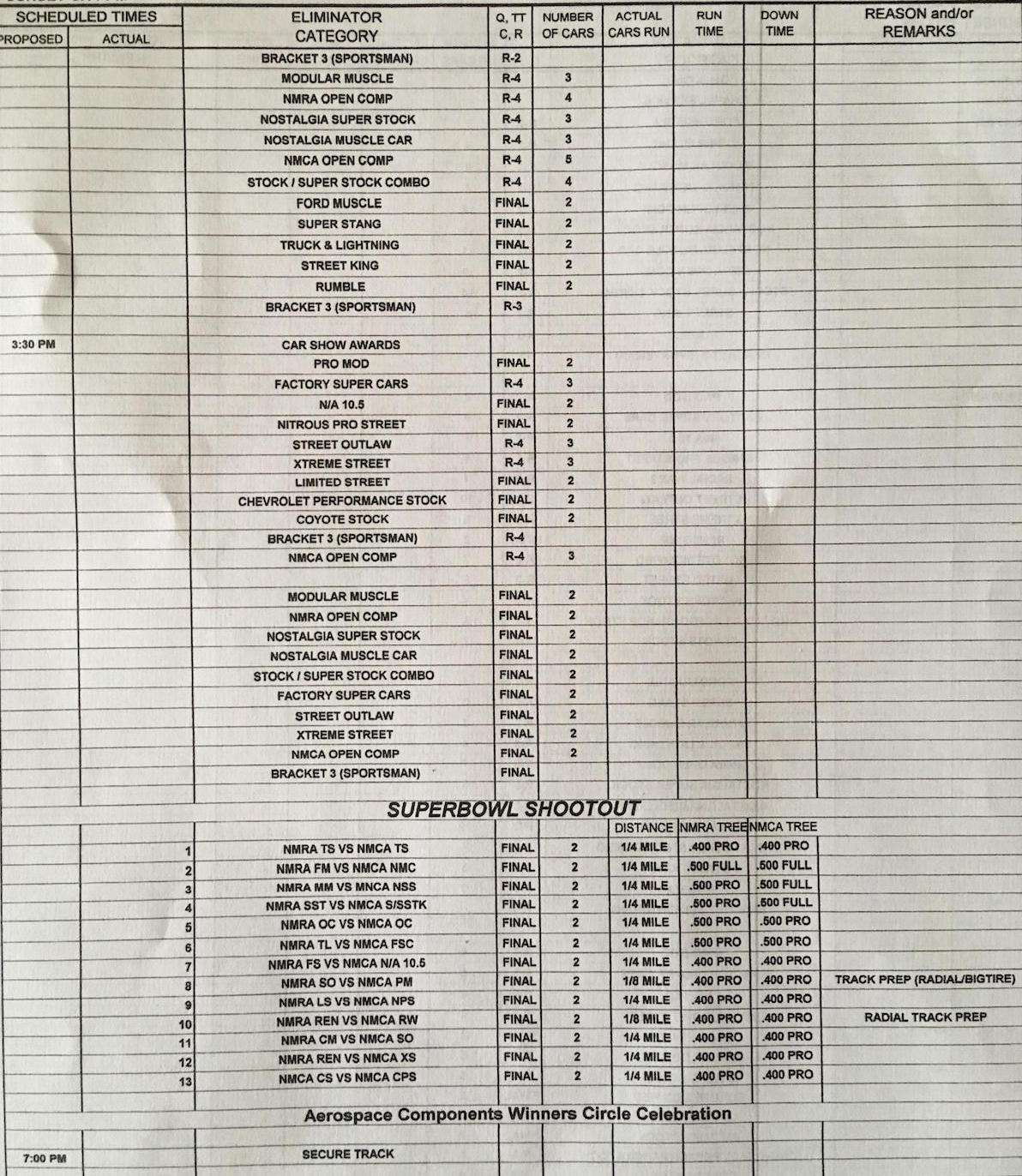 While we're used to seeing Edelbrock Xtreme Street driver Ray Cox in his 1977 Trans Am, he has parked it for now, anyway to climb into the 2002 Trans Am he debuted in competition this weekend. There's at least some nostalgia involved, however, as the car is packing the nitrous-gulping 550 cubic-inch Pontiac engine that used to be in Cox's 1977 Trans Am, and an RPM Transmissions-built Turbo 400 helps put the power down. Kevin Stevens of Straightline Performance built the rear-end and torque arm for the car, which comes to a stop with a new set of Aerospace Components titanium brakes. We pulled all-nighters for three weeks straight to get the car done in time to make this race, said Cox, whose crew chief is his son, Brad Cox. It appears as though it was worth it, as Cox picked up with each pass and posted a 5.29, 4.93 and 4.88 in qualifying, and finally, a 4.87 in the first round of eliminations. Rather than lamenting that he lost the round, Cox celebrated it as a career best. 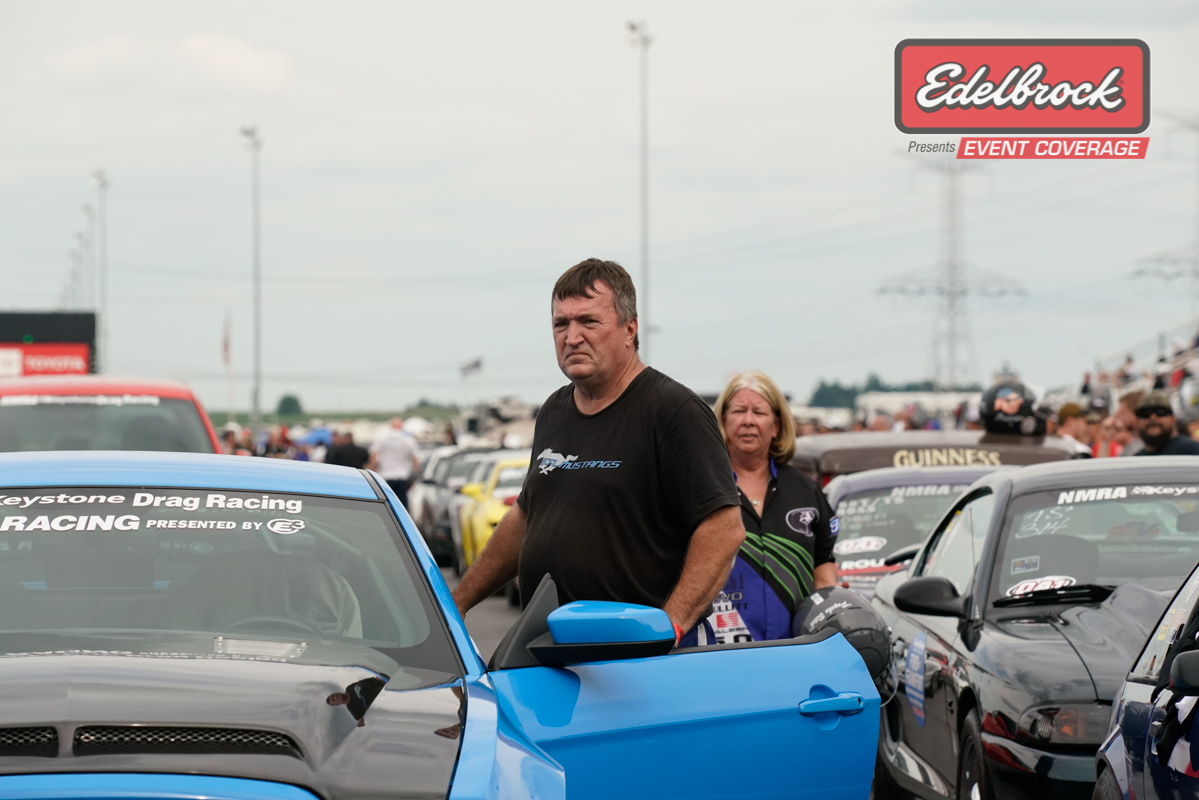 A past champion in Gear Vendors True Street competition, Randy Thomas brought his 2010 Shelby to Joliet looking for a shot at the top spot. A healthy field of cars and trucks descended on Route 66 Dragway for True Street, and the cruise was moved to Chicagoland Speedway where cars went four wide around the track. Back on the drag strip, Thomas showed the upper hand, using an 8.40 at 164 mph best on the way to an 8.78 average and the True Street win yesterday. I finally get a shot at a Super Bowl ring, said Thomas, which will happen later today when the NMCA and NMRA winners battle it out for the Super Bowl team title. After securing the season opening win in the ARP Nitrous Pro Street at Bradenton, Florida, Jordan Ensslin has been absent from the NMCA series, running local Outlaw 362 events in his home state of Florida. We're using this as a test session for the PDRA Pro Outlaw 632 class running at Galot in two weeks, said Ensslin. Other than a 100 pound difference in base weights, the rules between the classes are the same, allowing the tune-up on the engine Jordan's grandfather assembled and the Nitrous Pro-Flow system to remain constant. Ensslin qualified on top of the field with a 4.37 at 156 mph, then improved to a 4.35 in a round one victory last night. The Chevrolet Performance Street Car Challenge gives LS and LT-powered street vehicles a chance to battle for a three-run average to determine the overall champion, plus awards for 9-second through 15-second champions. Getting the top spot in Joliet was the second-gen Firebird of Stephen Chechak. A past Hot Rod Drag Week participant, the engine bay holds a LS-based combination measuring 403 cubic inches with a single 91 mm turbocharger. The power passes through a Turbo 400 to a 3.40-geared 9-inch rear end. A best of 8.61 paved the way to an 8.72 average for the victory. The HEMI Shootout made its latest stop in Joliet, bringing a large turnout of late-model vehicles to battle it out for the top prize and bragging rights in the HEMI community. Florida racer Bill Lee Jr. started the season behind the wheel of this red 2018 Demon owned by Steve and Lisa Best of Indiana, and picked up the win in Bradenton with a 10.32 average. He improved his average to a 10.13 in Atlanta, but finished second in the final standings. Steve Best jumped behind the wheel in Bowling Green and notched the win, but Lee Jr. returned to the seat in Joliet to claim victory with a 10.18 average just nosing out the 10.19 of Derrick Roderweiss. Defending Detroit TrueTrac Nostalgia Muscle Car champion Andy Warren has been on a roller coaster of emotions the last few days. After staying in Kentucky to be with his mom through surgery to remove a brain tumor, he got the "all good" sign and her blessing to get to the track, hitting the road in time to make Friday's afternoon qualifying session. He came down with food poisoning Friday night, but soldered on to face Mike Clifford round one last night. Warren got the win, but had some work to do upon return to the pits. The vent tube came out the transmission case and got the blanket wet, said Warren. But he got it cleaned up and ready for round two of eliminations today. The result of ten years of work, John Amick is responsible for this stunning 67 Chevy II being raced in the VP Racing Fuels Street Outlaw class. I bought it as a stripped roller, said Amick. He did all the work except paint and engine, leaving the latter to BES to construct a killer 434 cubic inch small block with an Induction Solutions nitrous kit. 1100 dyno'd horsepower is passed through a powerglide transmission to a pair of 275 radials, and Calvert Racing supplied the leaf spring suspension. The fresh build struggled in qualifying, and Amick spun the tires in a first round loss against Shawn Ayers. After a wicked wreck in his Mustang in 2016, Fuel Systems Technology NA 10.5 driver Chad Neuenschwander, his family, friends and fellow racers spent the following months rebuilding it, and he debuted the new version of the car, with his small-block Ford engine and G-Force GF-2000 five-speed transmission, at the NMCA race in Florida last March. As expected, he had to work hard to dial it in, but he has made mad progress, especially this weekend at the 13th Annual Nitto NMRA/NMCA Super Bowl of Street Legal Drag Racing presented by Fuel Systems Technology at Route 66 Raceway. He ripped off an 8.02 in the first round of qualifying, a personal best, followed by an even better 8.005 and an 8.003 in the second and third rounds of qualifying, and when it was time to line up for the first round of eliminations, his crew told him to put a 7.99 on the board or else they weren't going to pick him up from the return road. Their wish was his command, as he put a 7.993 on the board to win the round. He wasn't done there, as he proceeded to put an 8.03 and a 7.98 on the board to win the second and third round of eliminations, and he's currently preparing for the his first-ever final round in the very competitive category. Jason Hamstra is making strides in the VP Racing Fuels Pro Mod class. After qualifying second with a 3.74, Hamstra improved to a 3.71 in round one. Don Walsh Jr. took the class record with a 3.70, but Hamstra lowered the boom in round two with a 3.66. He needs the one percent back-up to get the record back, and a 3.70 for a semifinal round victory just misses that mark, but the team is going to the final. Everything has been going pretty well this weekend, said Hamstra. The track is great and the prep from this group is always on. Hamstra is trying to catch Walsh Jr. in the points standings, and a final round victory could put him back on top of the standings. The Dragzine-backed Corvette of James Lawrence has experienced the highs and lows of racing during the 2018 season in the Mickey Thompson Radial Wars class. A first round loss in Atlanta is the only speed bump in Lawrence's success, as a pair of wins has put him atop the points standings. Just another day at the office, is how Lawrence described his Joliet weekend, as the Procharger-fed Proline powered 2017 Corvette qualified third with a 3.93, and has sliced through the field to match up with Dwayne Mills in the final round today. After a few seasons in the ARP Nitrous Pro Street class, Jennifer Brooke-Rice and her father Ed Rice feel they've turned a corner here in Joliet. We changed to Brisk spark plugs at this race, said Ed. They will last three runs, which in a nitrous car is almost unheard of. The 2009 Mustang qualified fifth in the 16-car field, and Jennifer waded through a couple rounds of eliminations to meet low qualifier Jordan Ensslin in the semifinal round. The upset of the class occurred as Jennifer ran a 4.53 to advance over a broken Ensslin, earning a berth in the first all-female ARP Nitrous Pro Street final round against Tricia Musi, who will have lane choice. See NMCA eliminations results HERE
Fuel Systems Technology
,
Nitto Tire
,
NMRA/NMCA Super Bowl of Street Legal Drag Racing
,
Route 66 Raceway