With hundreds of cars cruising in NMCA and NMRA categories at this weekend's event at Route 66 Raceway, we're enjoying one of the largest Super Bowl of Street Legal Drag Racing events ever. 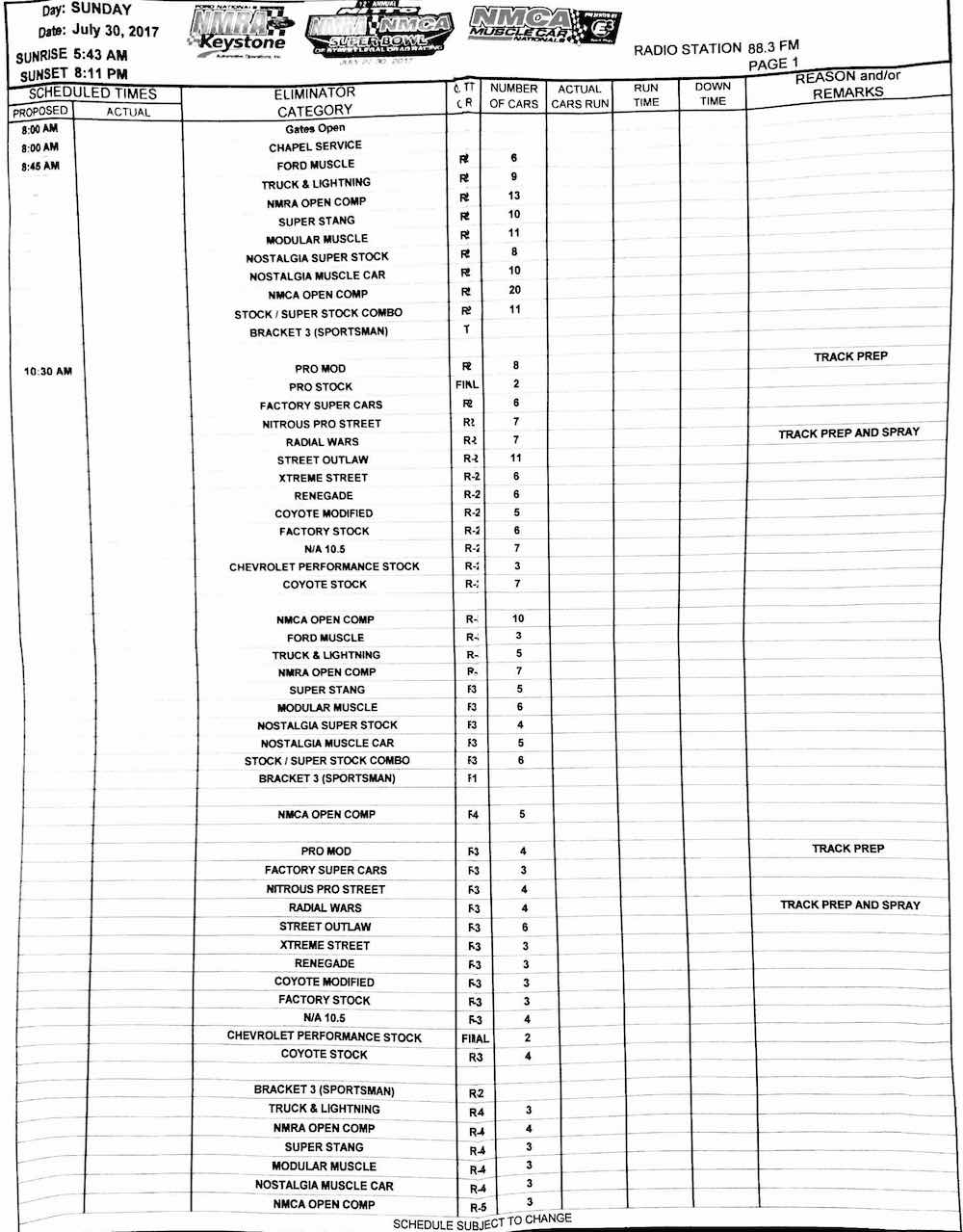 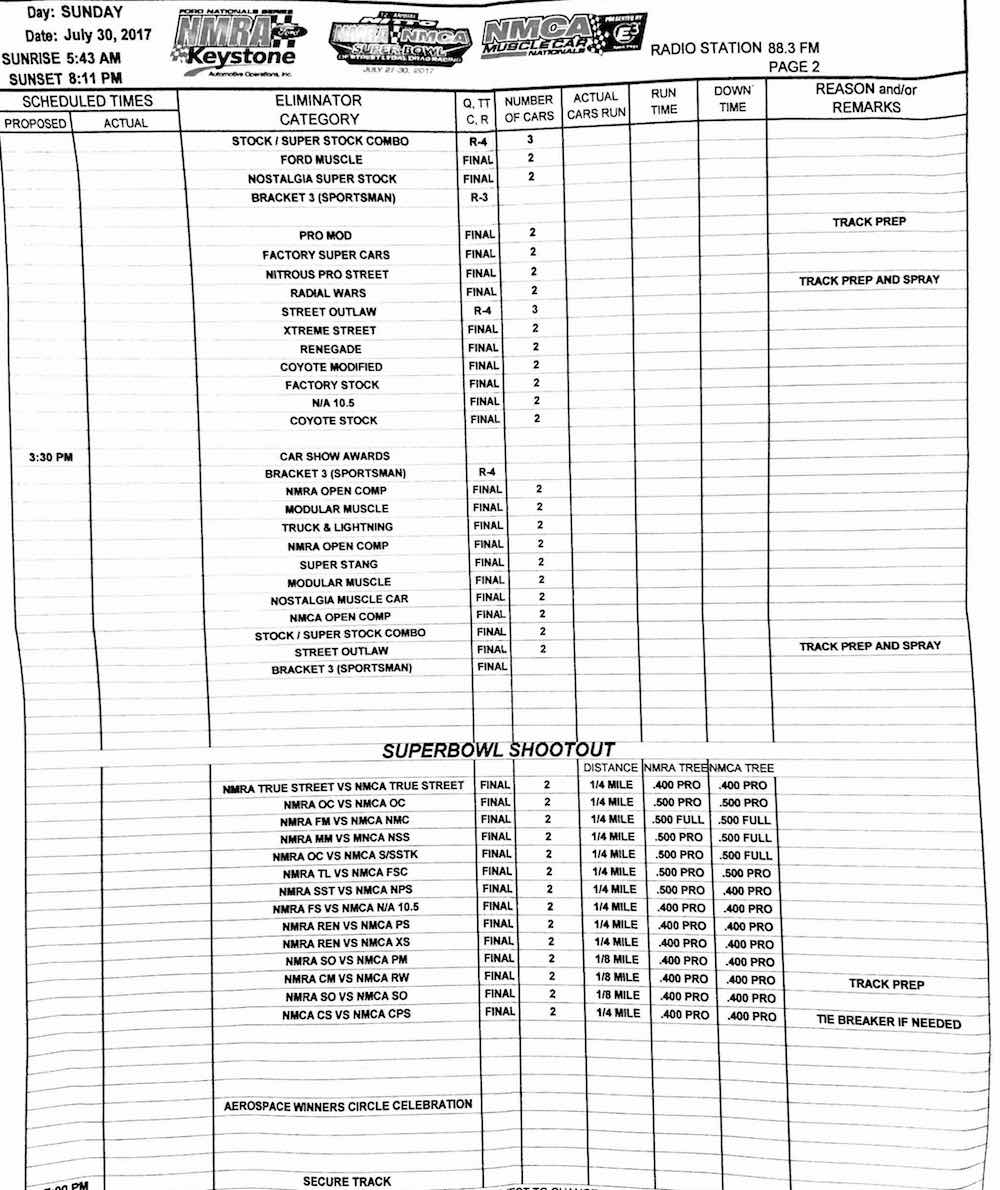 We're already rolling this morning, and we're counting down to what's sure to be a captivating conclusion featuring the Aerospace Components Winners' Circle, a runoff between winners in each series and highly-coveted Nitto Diamond Tree Rings. 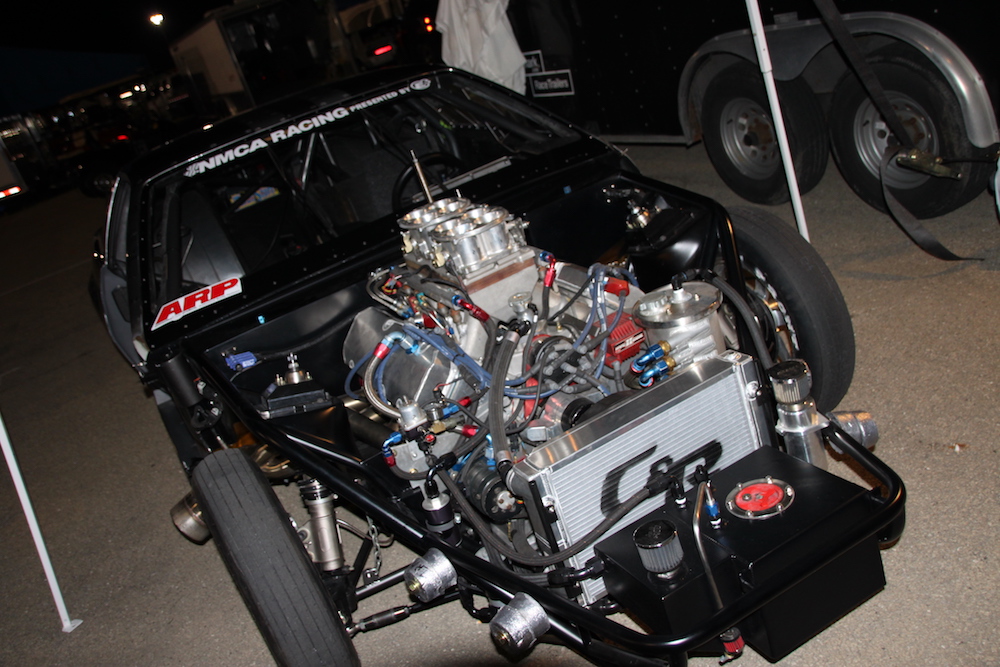 We spotted longtime ARP Nitrous Pro Street driver Andy Vogt going over his 1990 Trans Am late last night, as he's not content with how it's getting from the starting line to the finish line this weekend. It's understandable, as the car was recently front-halved and recently received a new front clip and fiberglass doors for weight reduction. Additionally, its Speed Service-built and nitrous-gulping 525ci big-block Chevy was freshened before being paired with a Turbo 400 Vogt built at his business, Andy's Performance Transmissions, and Vogt and his hardworking team are dialing it in. Vogt, who was forced to get out of the throttle in qualifying and again in the first round of eliminations, got the win when reigning class champion Joe Bucaro had an issue that caused his Mustang to roll through the beams, and is currently preparing for today's second round of eliminations. 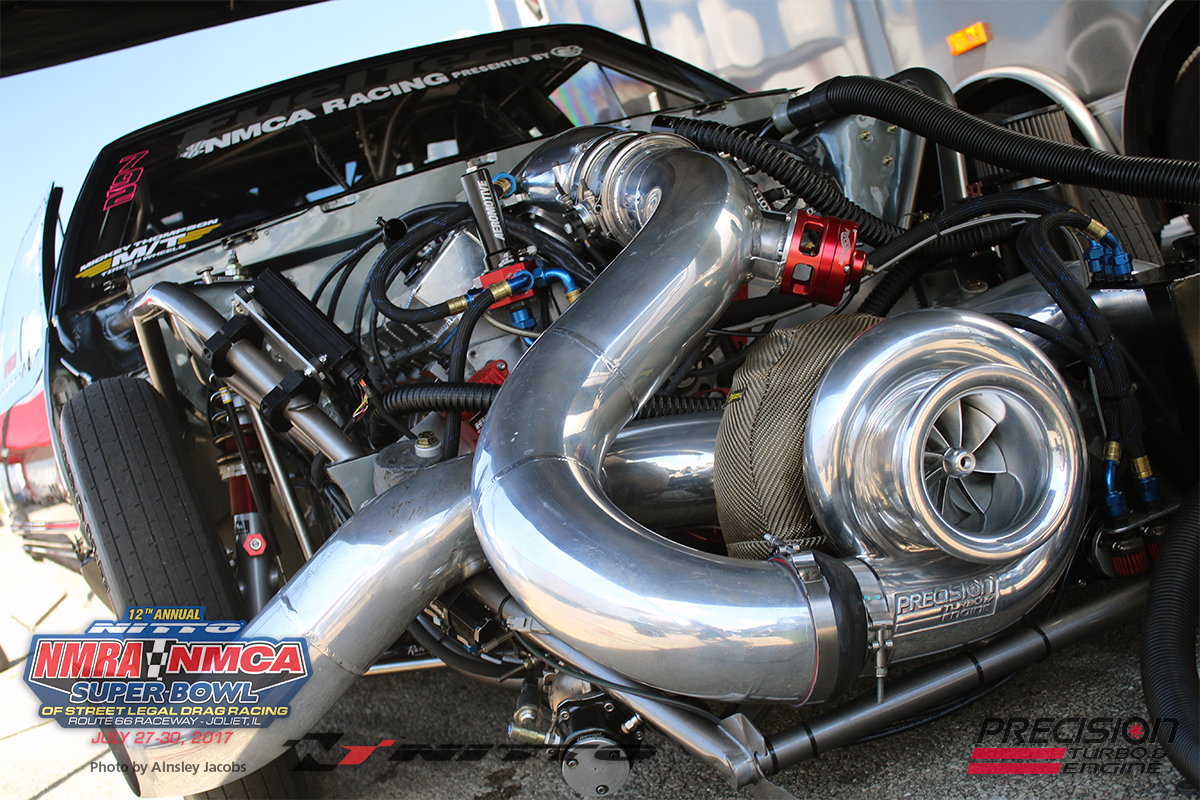 The first man to run a 3-second eighth-mile blast on 275 drag radials, Ziff Hudson, has achieved another first this weekend at Route 66 Raceway: it's his first-ever NMCA event. The Mickey Thompson Radial Wars driver from North Carolina sure picked a good race for his series debut. In qualifying, Ziff was the number two driver on a 3.939 at 190.57 mph and set a new personal best for the car in its current trim. With TKM (that's The Kevin Mullins for the uninitiated) power under the hood and a massive 118mm turbocharger all managed by a FuelTech FT600 EFI system and FT Spark Box, Hudson's Racecraft-built Mustang actually broke the transmission during testing on the Wednesday prior to this race. Hudson threw in a spare Rossler two-speed 400 transmission and Cameron's converter, and had no idea what to expect. In round one of eliminations, Hudson hustled to the finish ahead of Josh Klugger and got the win. He'll enjoy a bye run in round two and is hoping to push it even further. 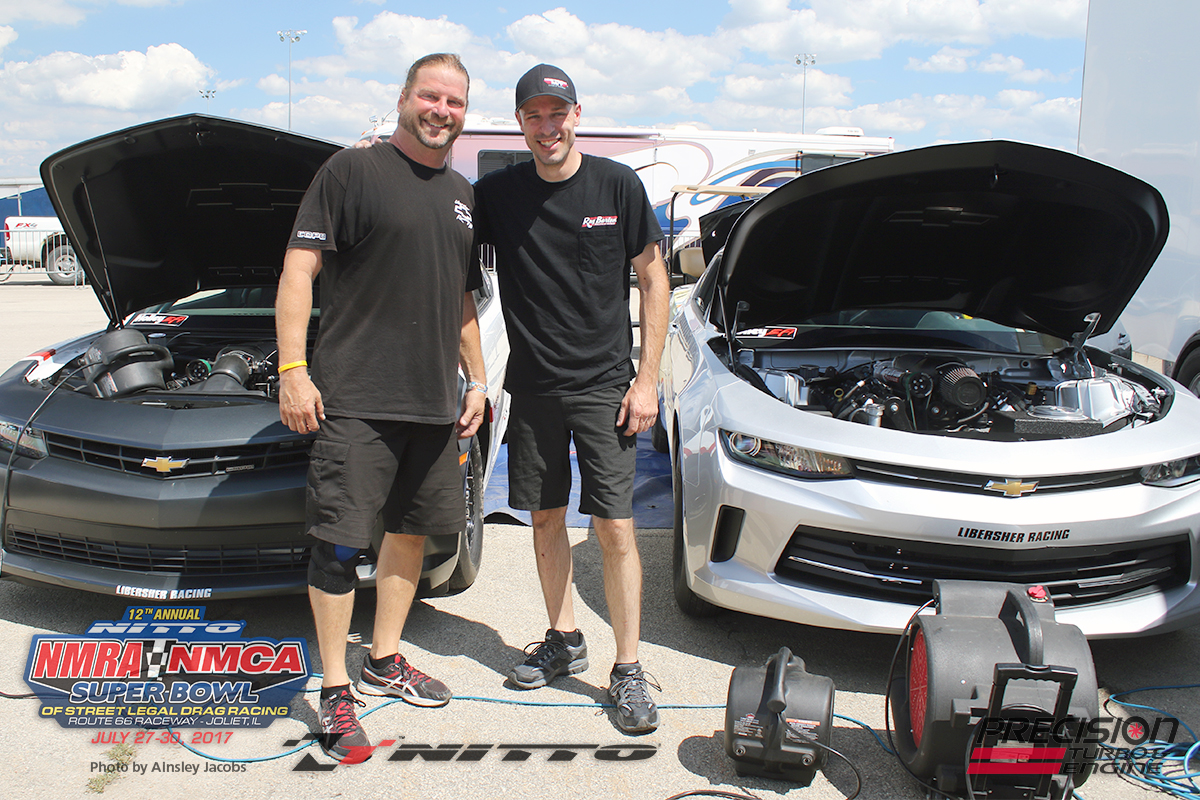 Holley EFI driver Factory Super Cars driver David Barton (right) took the number one spot in qualifying with an 8.219 at 164.73 mph blast behind the wheel of car owner Scott Libersher's 17 COPO Camaro. Libersher (left) himself is behind the wheel of another 17 COPO, which they swapped the gears on in just one hour earlier this morning. Libersher had expected his car, the newer of the two, to be the quicker one, but it's been just a touch behind Barton. The men each won their first and second eliminations match ups, and will face each other in the semi-finals shortly. 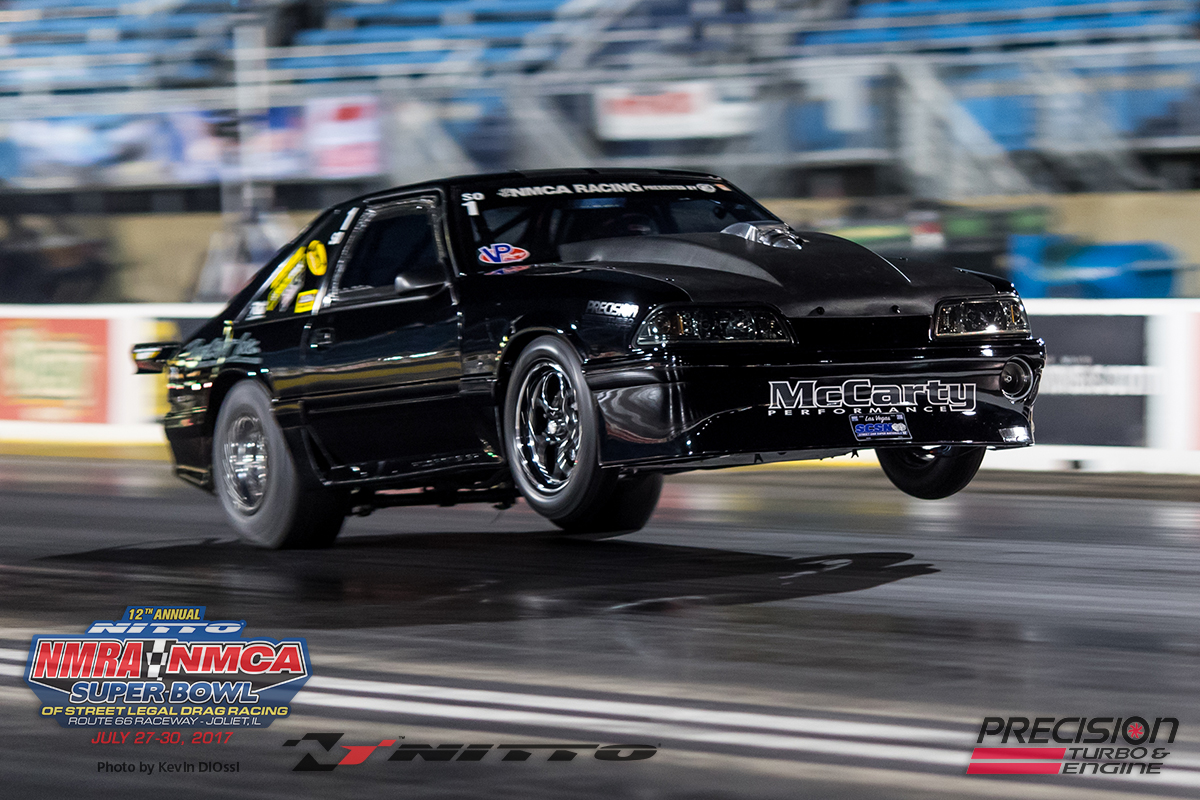 It was game over for Jacky McCarty last night in VP Racing Fuels Street Outlaw. The proprietor of McCarty Performance went for a wild ride during the first round of eliminations. Shortly after the hit, his turbocharged 91 Mustang headed towards the center line. Not wanting to disqualify himself, McCarty tried to steer it back into the groove but the car didn't cooperate. His next plan was to romp on the throttle a couple times to get the car to kick back to the left. He intended to purposely put it into the wall and ride the wall all the way to the finish in hopes of winning. Unfortunately, the cowboy's crazy plan never came to fruition as the crank suddenly exited through the bottom of his 390 ci Ford small block and put an end to his weekend. 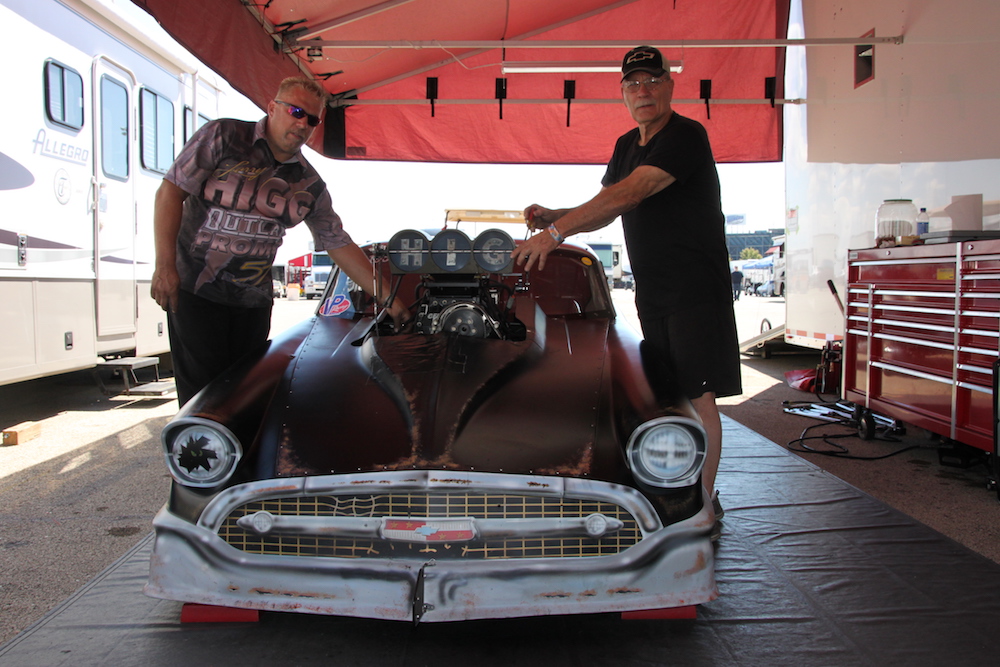 While Larry Higginbottham had been running PDRA Pro Mod, he introduced himself and his 1957 Chevy to VP Racing Fuels Xtreme Pro Mod at the NMCA race at Beech Bend Raceway in Kentucky in May, and is back in action in the class this weekend. In the car packing a 526ci Hemi which he built and topped with a Hammer supercharger, he blew to a 3.96 to qualify in the eleventh position, won first round of eliminations with a 4.11 after Mark Lutton turned on the red in his Mustang and is currently preparing to pull to the lanes for today's second round of eliminations. Higginbottham, pictured here with crew member Dave Roloff, said he plans to take part in more NMCA races moving forward. 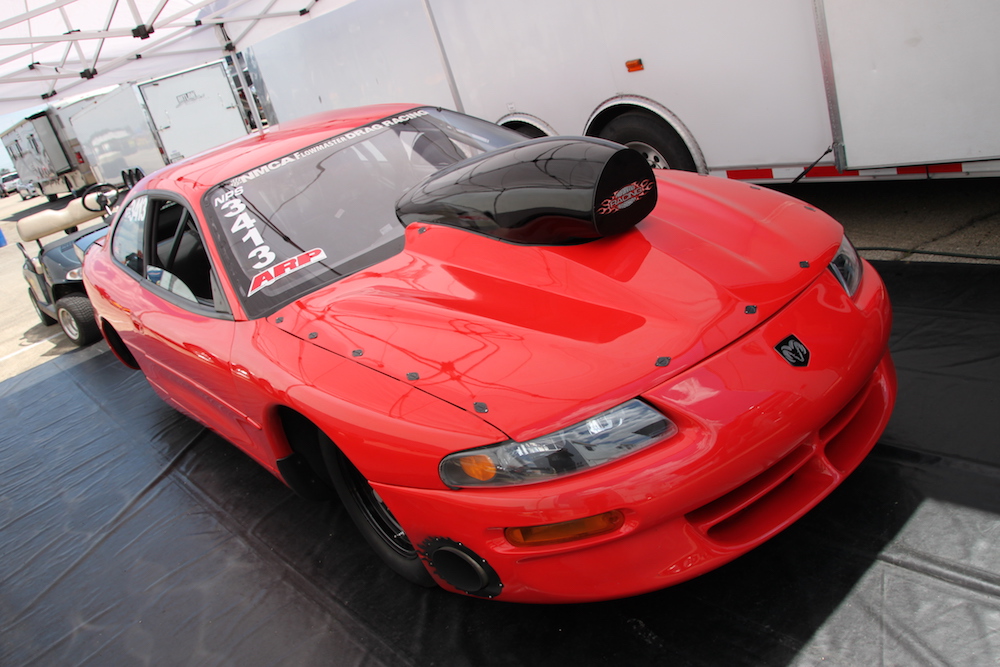 Jill Hicks is back in ARP Nitrous Pro Street action after a two-year hiatus, and she's making up for lost time, as she drove her 1998 Avenger to a 7.34 to qualify in the third position in the field of 13, collected a personal best top speed of 187 mph and is readying for a semi-final race. "It feels good to be here, and we're having a lot of fun," said Hicks, who relies on a nitrous-sipping 477ci Chevy engine and Proformance Racing Transmissions-built Turbo 400. Meanwhile, her husband, Brian Hicks, was behind the wheel of Ron Potenzo's 1963 Corvette this weekend, but was working to sort out some issues. 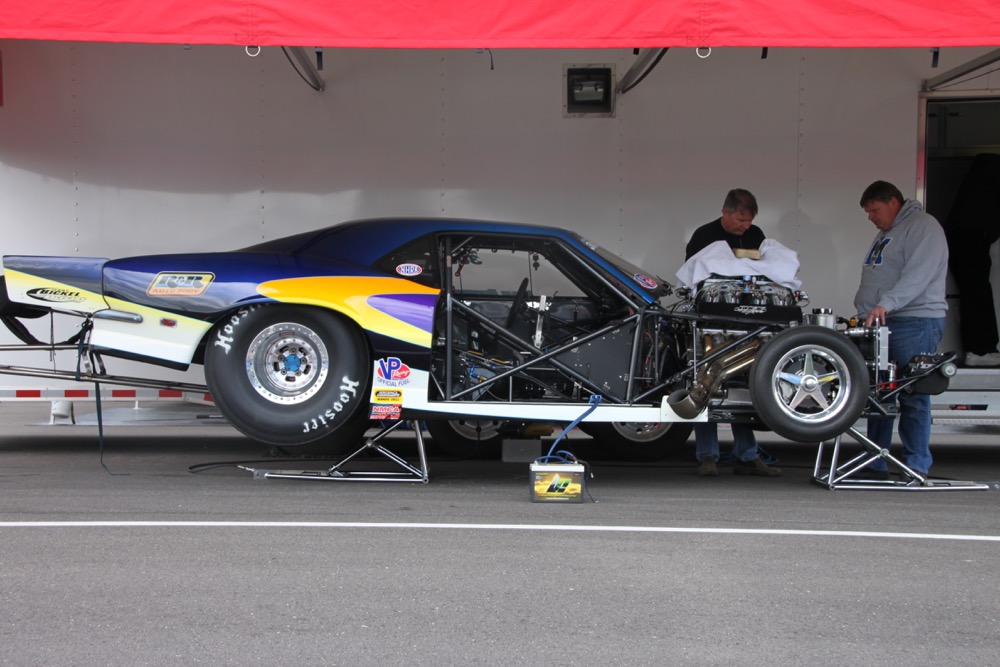 While Dave Roemer won first round of VP Racing Fuels Xtreme Pro Mod eliminations with a 3.97 blast from his Bickel-built 1968 Camaro, he lost oil pressure in his hardworking nitrous-sipping 864ci Buck Racing Engines-built bullet and was not able to complete the pass in the second round of eliminations. His crew wasn't overly concerned about what they may find when they poke around, as they said it could be something relatively minor. They and we hope to see North Ridgeville, Ohio resident Roemer back in action at the 16th Annual Honeywell Garrett NMCA All-American Nationals, Aug. 24-27 at his home track, Summit Motorsports Park in Norwalk, Ohio. Eliminations result can be found >>>HERE<<<