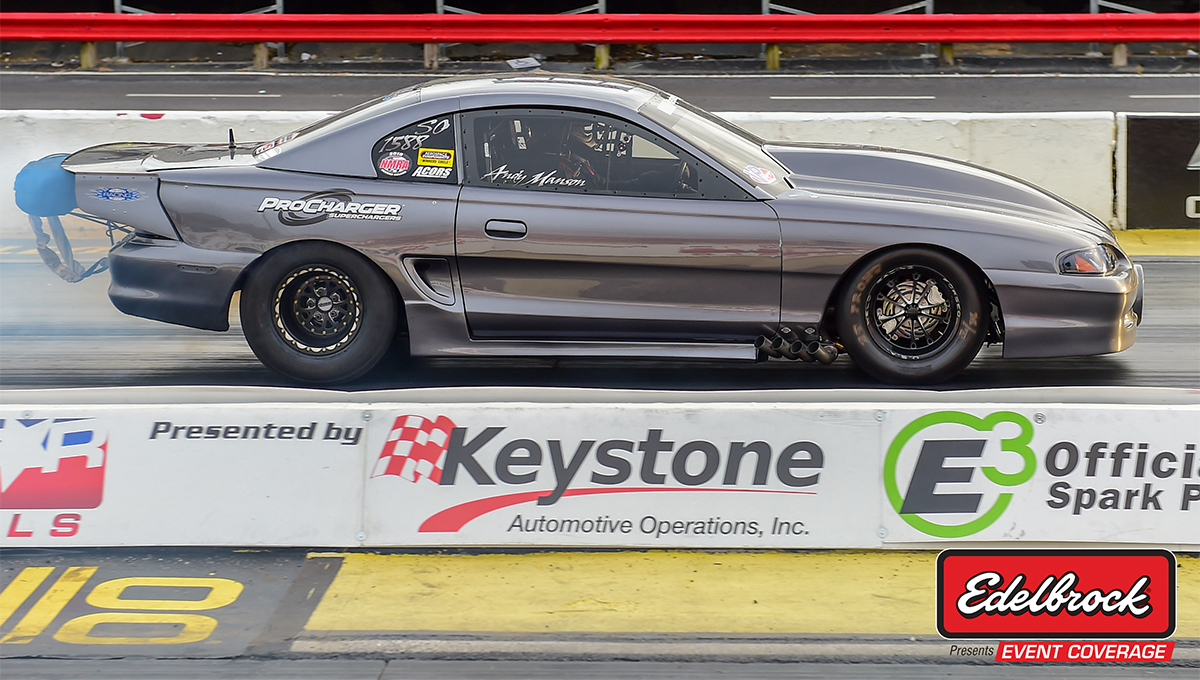 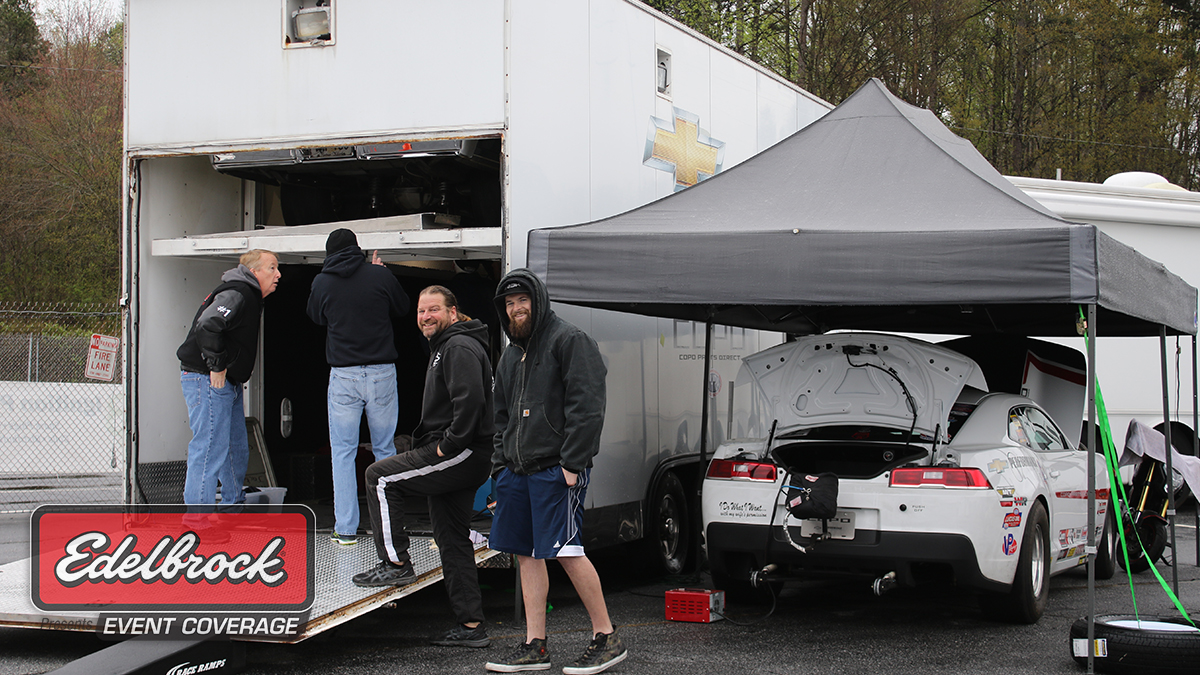 We had a bit of rain overnight, but the NMRA and NMCA staff was up bright and early this morning to start the drying process. Today's forecast is looking good, teams are busy getting ready for eliminations, and we expect to be rockin' and rollin' shortly. Above, NMCA Holley EFI Factory Super Cars superstar Scott Libersher and his team help with a little last-minute welding on Ricky Pennington's CP Stock '69 Chevelle.

Ladies and gentlemen, the NMRA staff hard at work! Here's Michael Washington showing off his coveted Bo Butner socks while Michael Galimi shows his support of the wardrobe selection. ;) 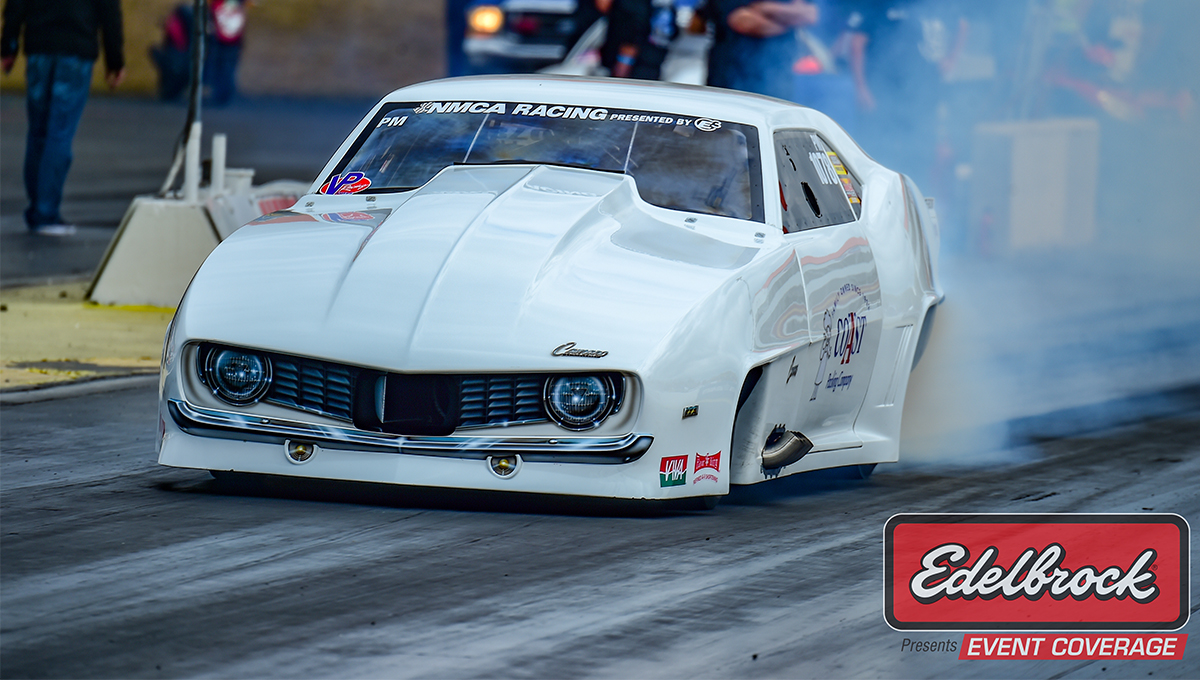 The VP Racing Fuels Xtreme Pro Mod category produced the category's first all 3-second field as 21 entries competed for 16 spots on the eliminations ladder. Sitting 5th is Eric Gustafson and his brand-new GNRC-built 1969 Camaro with a stellar 3.813 at 195mph. That qualifying run puts him in a unique position as the quickest and fastest Centrifugally Supercharged door-slammer. A ProCharger F-3R-136 pumps up a 526ci Hemi engine, which creates approximately 3,000hp. Jason Lee of PTP Racing is responsible for tuning the record-setting Camaro.

Andy Manson continues to dominate the Vortech/VP Racing Fuels Street Outlaw category with his ProCharger-blown ride. Last month, he stomped the NMRA field with consistent low 4.30s and set both records with a 4.29 and high speed of 171 mph. This outing, he has run under the national ET record with a top qualifying run of 4.28. Manson also took home the Street Outlaw All-Star Showdown title for a $1,000 bonus. The All-Star Showdown brought together four competitors from NMRA and four from NMCA for an 8-car field. The field was comprised of the top two in points from 2017, a randomly selected third entry, and a fourth chosen by the 2017 champions. The supercharged machine beat Daniel Pharris in a crazy final round where both racers ran 4.30; Manson got the win light thanks to a superior reaction time. 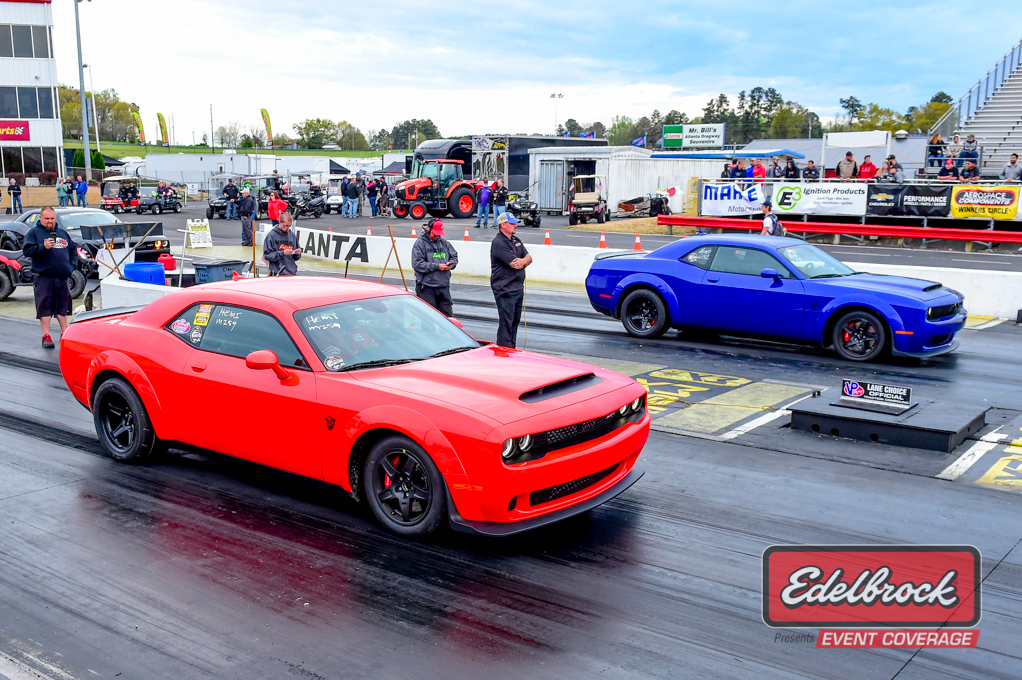 The Dodge//Mopar Hemi Shootout welcomed the quickest group of late-model Hemi-powered racers yet this season, and in competition were no less than five Dodge Demons, including a rare Indigo Blue model (far lane) that Rick Stimson had to wait for some time to acquire. The quickest Hemi owner of the bunch, however, was Phillip Bridges of Newton, Georgia, whose 2016 Hellcat averaged 9.42 seconds over three runs. 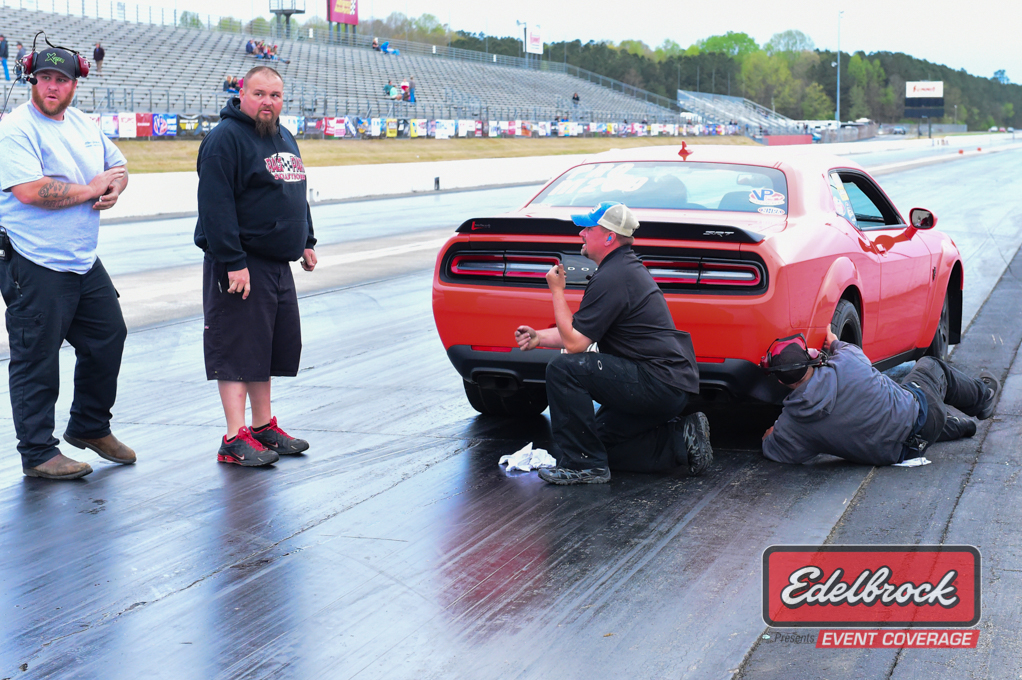 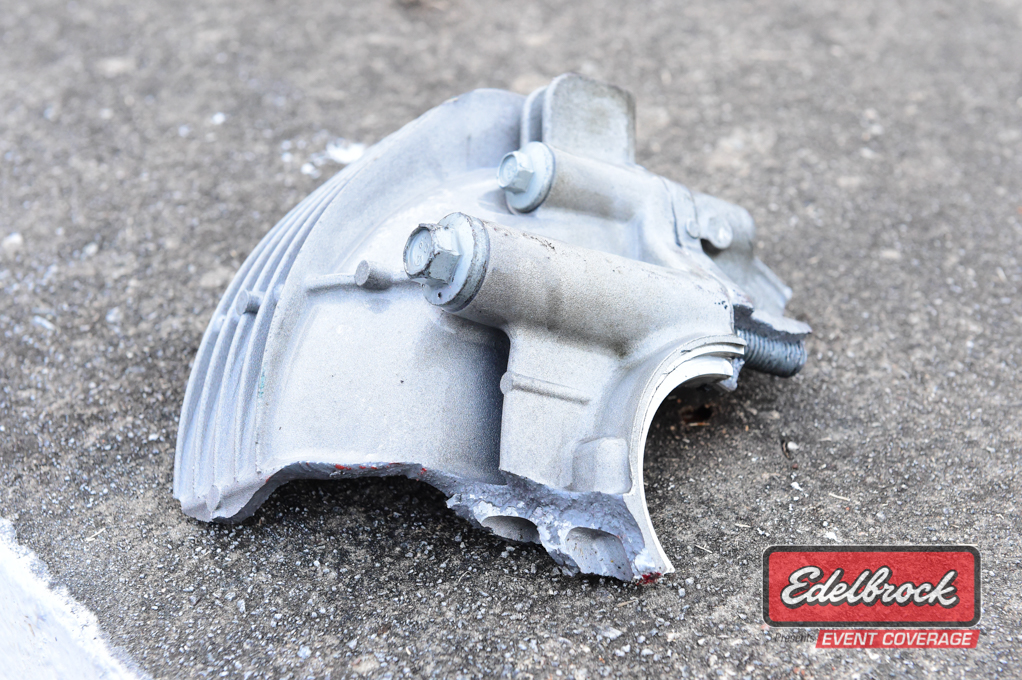 Demon owner Peter Mansolillo of Suwanee, Georgia, clicked off a 10.33 and a 10.62 in his 2018 Mopar, but on the third pass, the car lurched off the line and promptly ground to a halt after it shattered the rear differential housing. Word is that it should be covered under warranty. 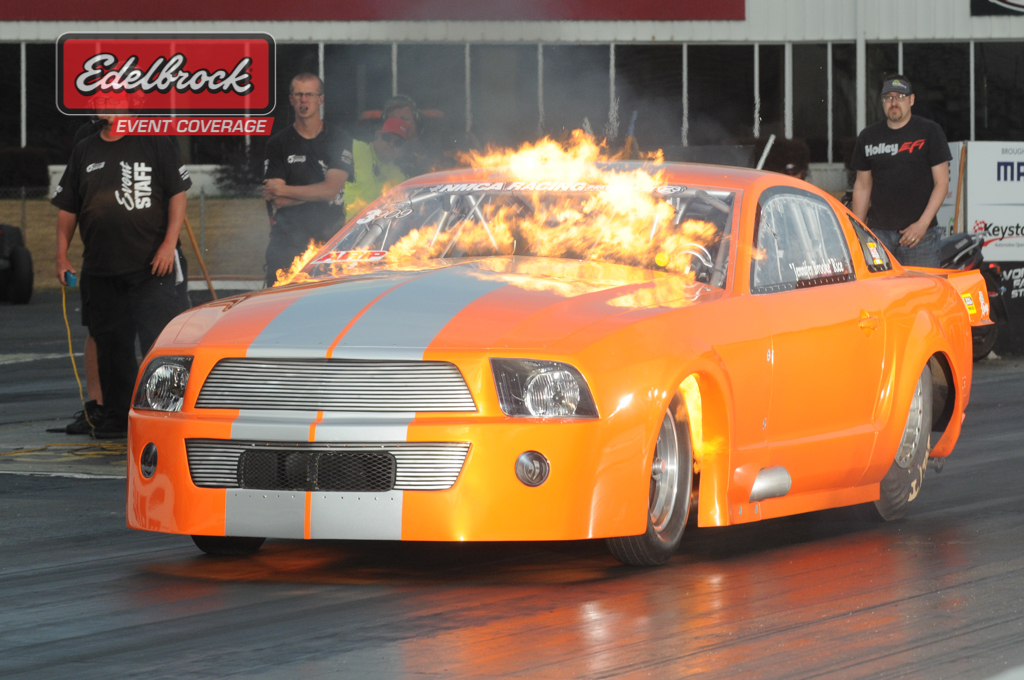 Jennifer Brooke Rice had a front-row view of a nitrous backfire during qualifying yesterday. Her 2009 Mustang qualified second with a 4.72, right behind John Trobiani and his Camaro who clocked a 4.69 elapsed time. 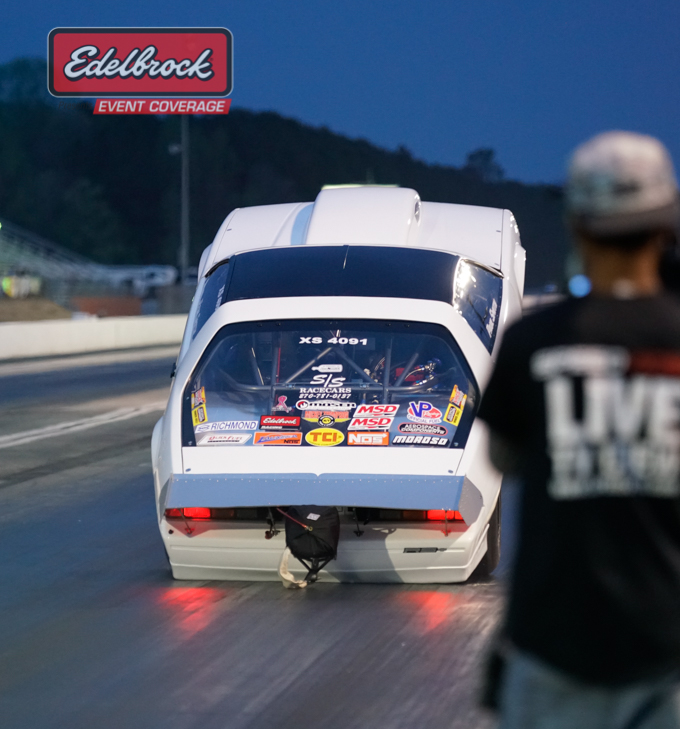 Paul Smith went for a wild ride during qualifying in his 1991 Camaro. "We missed the tuneup on the shocks, and the track was a lot better when we ran right after it had rained." The team has made some shock adjustments and lengthened the nitrous ramp on the progressive controller going into the first round of eliminations. 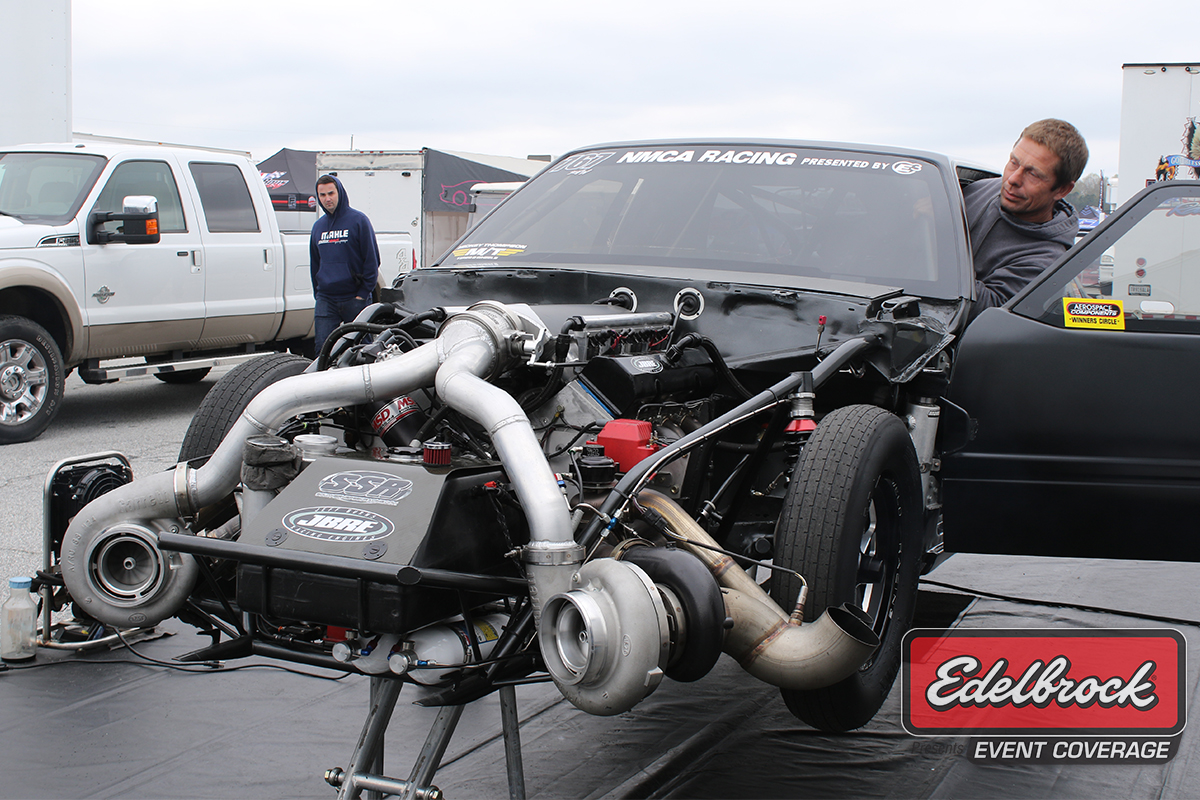 Small-block hero, Marty Stinnett, readies his twin-turbo 93 Mustang by bringing it up on the chip in preparation for the start of NMCA Mickey Thompson Radial Wars eliminations. 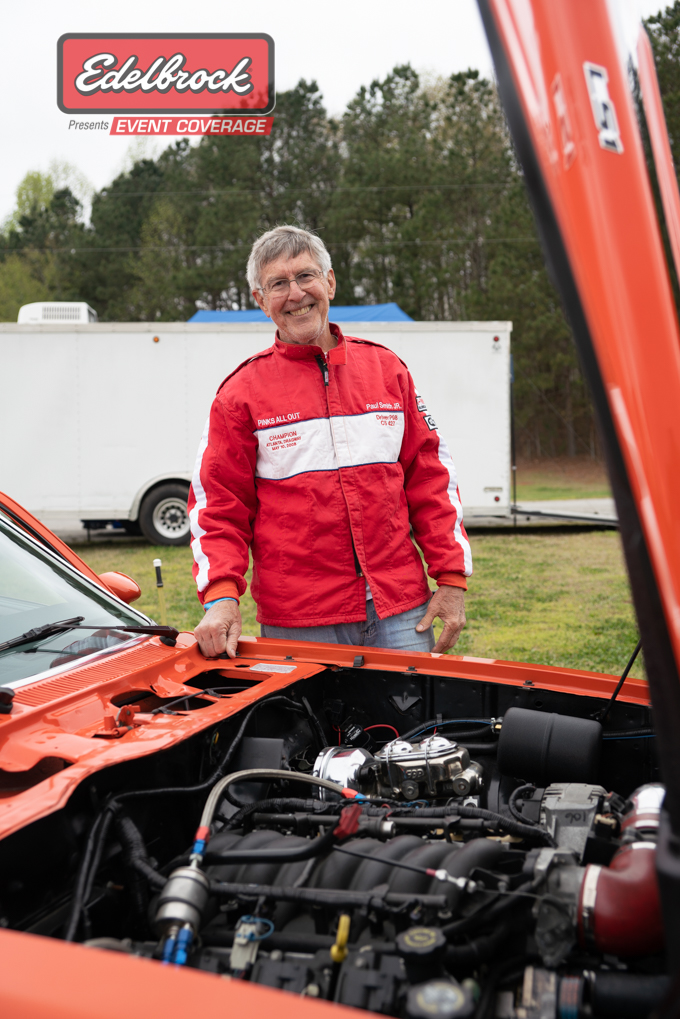 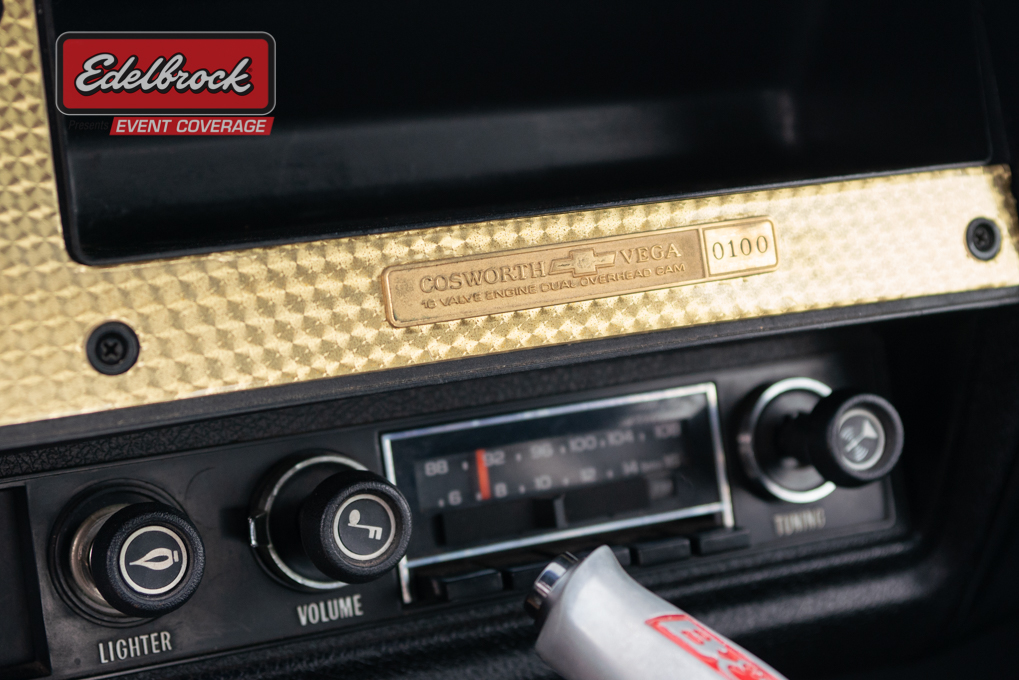 Paul Smith Sr. was raving about the new Chevrolet Performance Street Car Challenge that the NMCA hosted this weekend. The class is part of the Chevrolet Performance Challenge Series and Smith Sr. was attending as his son, Paul Smith Jr., is competing in that class with this original 1975 Cosworth Vega, which has received an LS1 upgrade along with an RPM Transmissions 4L60E transmission. The Smith's purchased the Vega already modified and the car is driven weekly when weather permits. "We love racing with the NMCA," noted Smith Sr. "The staff does an excellent job and this Street Car Challenge class is great. It's really easy for people to enter and have fun." Smith Jr. is also competing in the bracket classes with his C5 Corvette. >>>ELIMINATION RESULTS HERE<<<
MAHLE Motorsport
,
NMRA/NMCA All-Star Nationals
,
ProCharger