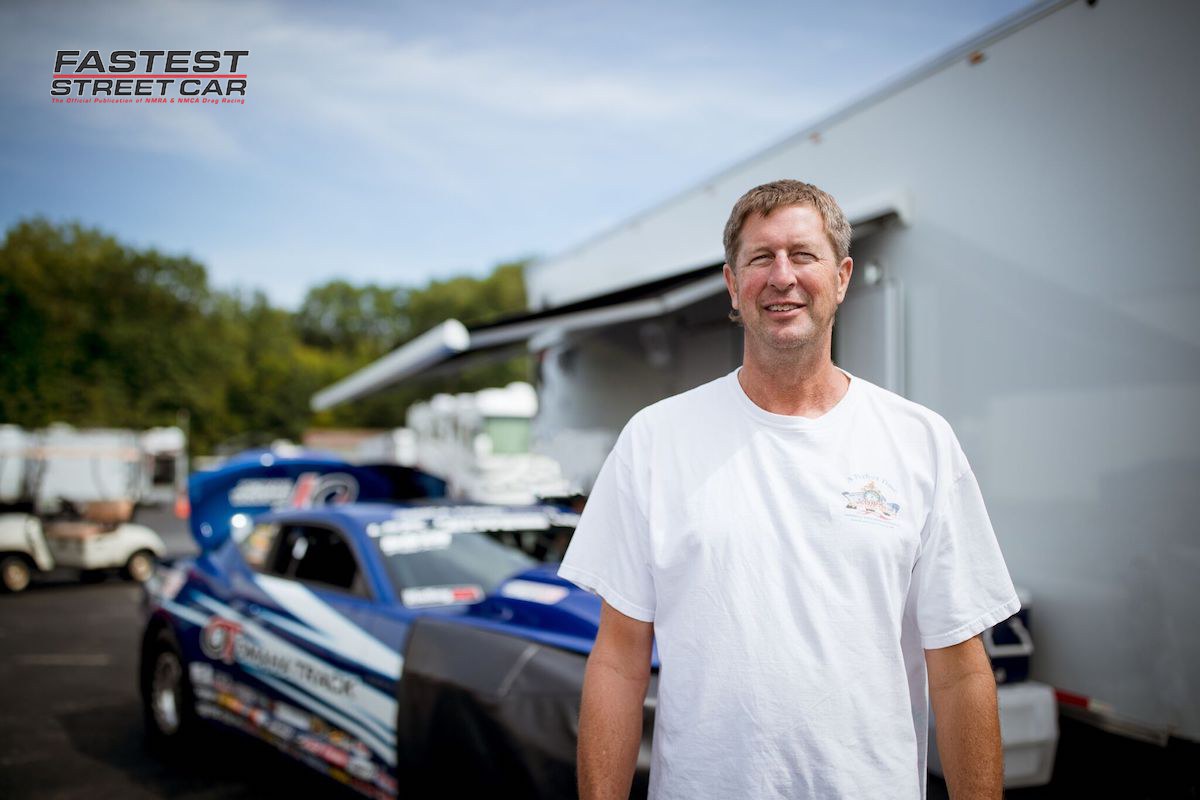 While Ted Hughes had road-raced and drag-raced in various cars and categories through the years, he decided to change gears by purchasing a new COPO Camaro in 2016.

All year long, he proved that he and his cars flying Omaha Track and Patterson Elite Performance banners were capable and competitive, and he recently finished thirteenth in Holley EFI Factory Super Cars points and third in Chevrolet Performance Stock presented by Scoggin-Dickey Parts Center points.

Ted and his team always have a positive attitude, and have been making great strides, said Scott Libersher, who was the 2017 Holley EFI Factory Super Cars champion and is the 2018 Coan Engineering Stock/Super Stock champion. They work hard and are great competitors. I know they're going to be a force to be reckoned with next season.

Read on for more about Hughes, who has been married to his wife, Lynda, for 22 years, and shares with her a son, Theo, who is a junior in high school and plays baseball and basketball, and a daughter, Samantha, who is a sophomore in high school and runs cross-country and track. Hughes is a plant superintendent at Hughes Brothers in Nebraska, a company which has been in his family for 97 years and builds structures that carry power lines across the country, and when he's not at the track or at work, he can be found waterskiing or wakeboarding with family or watching the Nebraska Cornhuskers play football while sitting 33 rows up at the 45 yard line with coworkers. 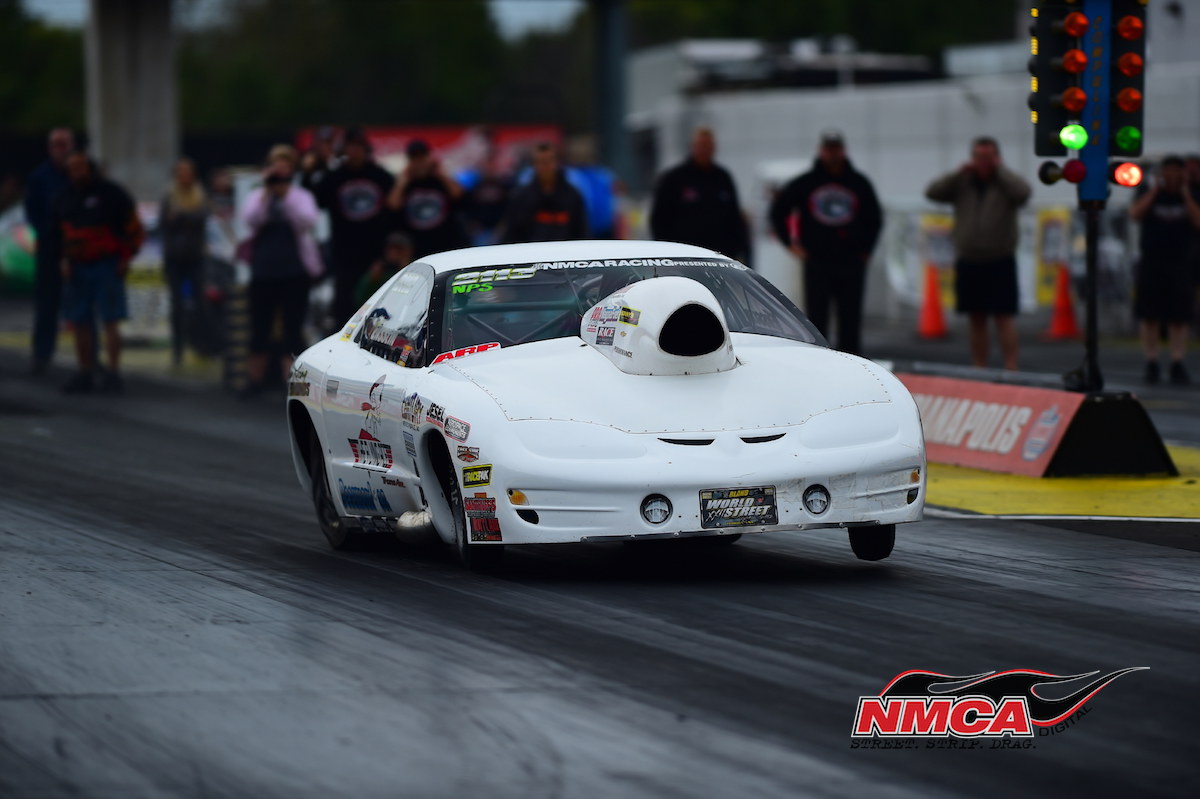 WHEN DID YOU DEVELOP A PASSION FOR POWERFUL CARS

That would have been when I was sixteen and my dad gave me a 1961 Corvette, which I still have. It has been restored, but it's silver and has a 270-horsepower 283 cubic-inch engine. I used to take it to car shows when I was in my late teens and early 20s, and when it needed maintenance or repair, I would have to take it to someone because I hadn't started working on cars yet. At one of the car shows one day, I mentioned to someone that I wanted to start drag-racing, and he mentioned that he had a drag car, so we left the car show to go look at it and I bought it right then and there. It was a 1963 Nova with a big-block Chevy in it, and we painted it turquoise. In around 1987, I started racing it. One of the good things about buying that car was that when it needed maintenance or repair, I would learn how to do it myself rather than take it to someone like I had been doing with the 1961 Corvette.

IN WHICH CLASS WERE YOU COMPETING WITH THE 1963 NOVA

I was running in Super Street at Scribner Raceway, which is now closed but was in Nebraska, and Kearney Raceway Park in Nebraska, in the 10.90 index. I drag-raced in a variety of Super classes until 1996, in a variety of cars, including a 1966 Corvette that I raced in Super Gas and a 1963 tube-chassis Corvette that I raced in Super Comp. I just got a little faster each time, because you've got to get a little faster each time, right 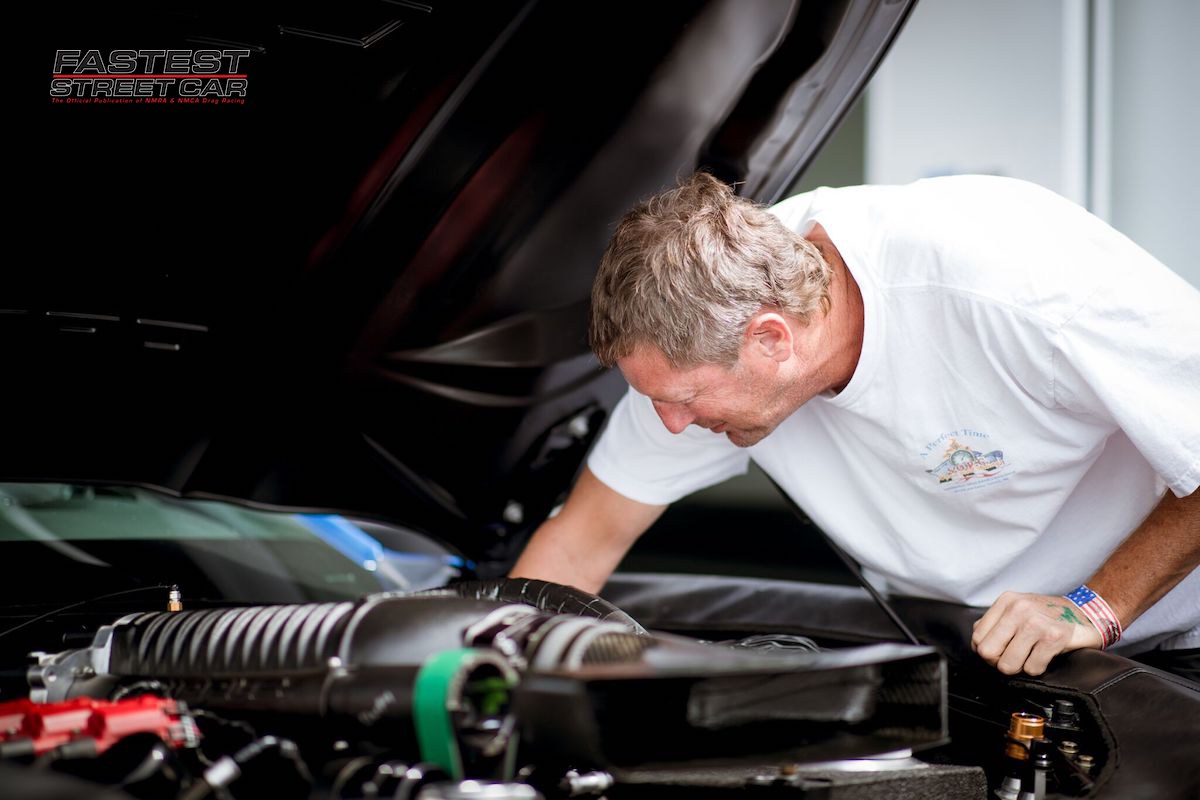 FROM DRAG-RACING, YOU WENT TO ROAD RACING.

Yes, and that was probably in about 1998, because I wanted to try something different. I bought a 1991 Corvette ZR1 and ran the Silver State Classic Challenge in Nevada. It's like a road rally with a standing start and you try to run on an average mph at the end of 90 miles, and the first time I did it, I averaged 125 mph for 90 miles, and that was a lot different than going 165 mph in the quarter-mile for Super class racing. Then, I bought a 2000 Corvette and averaged 160 mph for 90 miles at the same event. We ran 204 mph top speed, and so in 90 miles, it took 33 minutes and 45 seconds. Within a few years, we had figured it out and we ended up winning multiple events. I have run over 50 open road events and have probably won 30 of them. Through the years, I have run a 2010 Viper ACR, some Corvettes and I have a McLaren 720S. I've also raced a 2010 Viper ACRX, which is different than the Viper ACR I already mentioned, and we ran all over the eastern part of the United States for the Viper Cup. It was a televised series back then on SpeedVision and then the Velocity Channel, and we did that from 2010-2011. I own about 24 cars, and my current road-race car is a 2016 Viper ACR Extreme. I still do some road-racing, but I don't compete like I used to. I go to have fun. In addition to that, there are mile-long events with standing-starts, to see how fast you can go at the end of the mile. They're typically at airports, and I have a Ford GT for that and it has run 227 mph. It's a street car. I've also used the McLaren for that. We have some mile-long events around here where the entry fees go to charity.

They are entirely different. Road-racing was a lot more stressful to me. We would have 16 cars on the starting grid, and when the light changed, we would take off and everyone would try to get into the lead position. It was a lot of work, and if you got it wrong, you would take guys out and get into a big crash.

I missed drag-racing while I was road-racing, and wanted to get back into it, and rather than building a race car, I decided to purchase a Cobra Jet in 2013. It had a supercharged 5.0L engine and I raced it in NHRA Stock first and then with the Midwest Class Racers. They run about eight races a year at different tracks, and the Cobra Jet was running low 9s. But because I've always been more of a Chevy guy, I bought a 2013 COPO Camaro with a 427 cubic-inch engine. The idea at that point was to go NHRA Stock racing, and that's how I got tied into Patterson Elite Performance in Kansas. They actually built up the engine so that we could qualify higher in the NHRA Stock class. Those cars originally had Powerglides in them and we put a three-speed transmission in it to make it more competitive for NHRA Stock, and I ran that in 2013 and 2014, and the car ran low 9s naturally aspirated. I still have that COPO Camaro, as well as four other COPO Camaros. I bought my 2015 COPO Camaro with a supercharged 350 cubic-inch engine after talking with Allan Patterson about getting into the NHRA Factory Stock Showdown, but we ended up just testing and using the car for research and development. 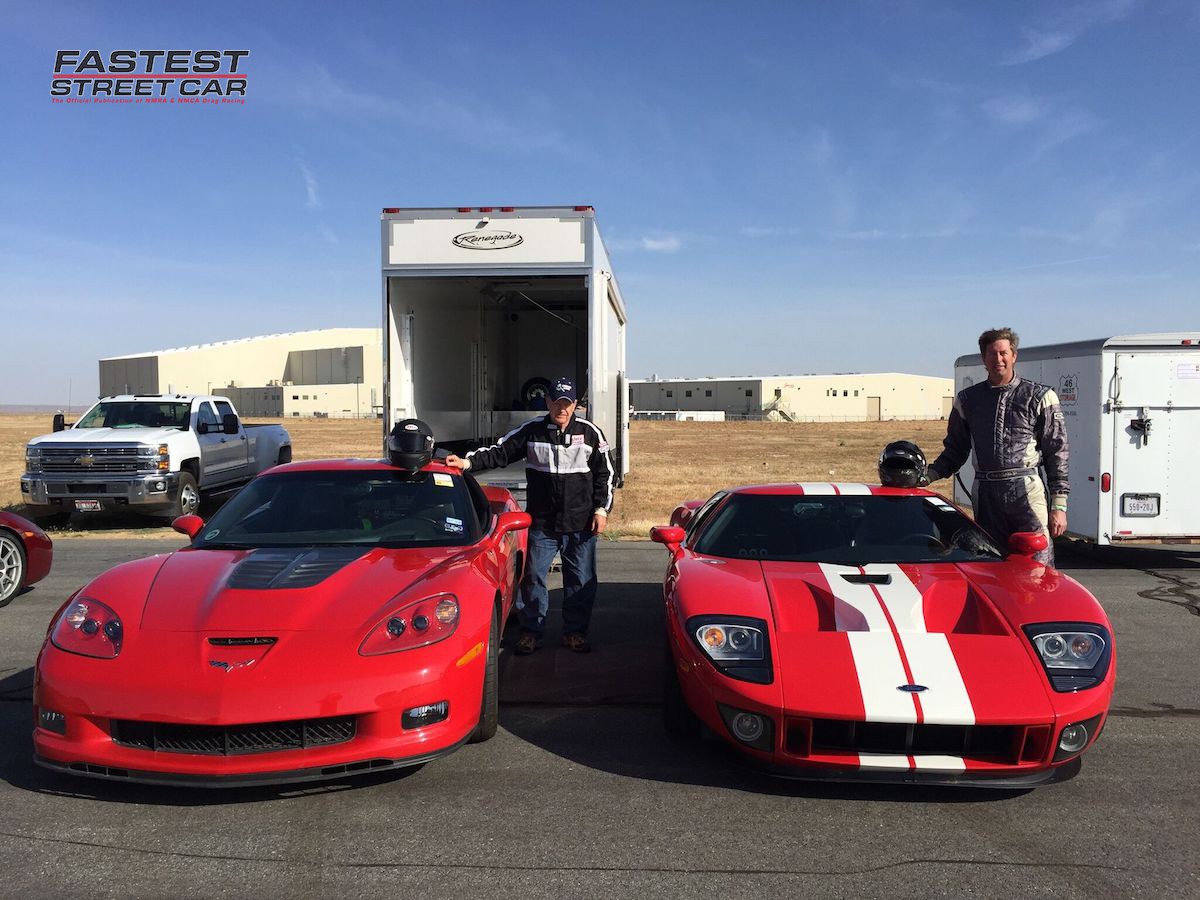 In addition to being just a little lighter, we thought we could be a little more competitive in the 2016 COPO Camaro, though that was just a guess. Brink in Texas put a little more cage in the car to make it legal to go faster, and Patterson Elite Performance went through the 350 cubic-inch engine, which was topped with a 2.9 Whipple supercharger. We had a Turbo 400 transmission and Coan converter, and we changed suspension components and we had four different styles of struts on the car. We were anxious to apply what we had learned with the 2015 COPO Camaro to the 2016 COPO Camaro, especially with regards to the engine and how to get it to where we needed it to be for the class and to get it to be competitive and to make it live, because previously, we would make four or five runs and then have to take the bearings out. It was worthwhile to learn in the 2015 COPO Camaro and then move to the 2016 COPO Camaro.

WE RE GLAD YOU JOINED NMCA HOLLEY EFI FACTORY SUPER CARS IN 2017.

I was attracted to the fact that the class is heads-up, run on a pro tree and is only six races a year, so I jumped on the NMCA bandwagon. It allows me to take part in the NHRA Factory Stock Showdown and spend time with my family. I started at the race in Florida in 2017, and I have run every race since then. We had been following it before we joined it, so we knew what to expect. All of the competitors are great, whether they're driving a Dodge, Ford or a Chevy, and it's clear that NMCA wants us to be here. It has been very refreshing. Unfortunately, we have struggled a bit. We haven't had a consistent program to take to the track. Whenever we've shown up at the track, we've had to start at square one. I'm making some changes this winter in an attempt to have a more consistent program so that I can get to the point where I can make the car perform better, be more competitive, and qualify in the top half of the field. We have ideas on how to get it done, and we're looking forward to next year and getting our first NMCA win. 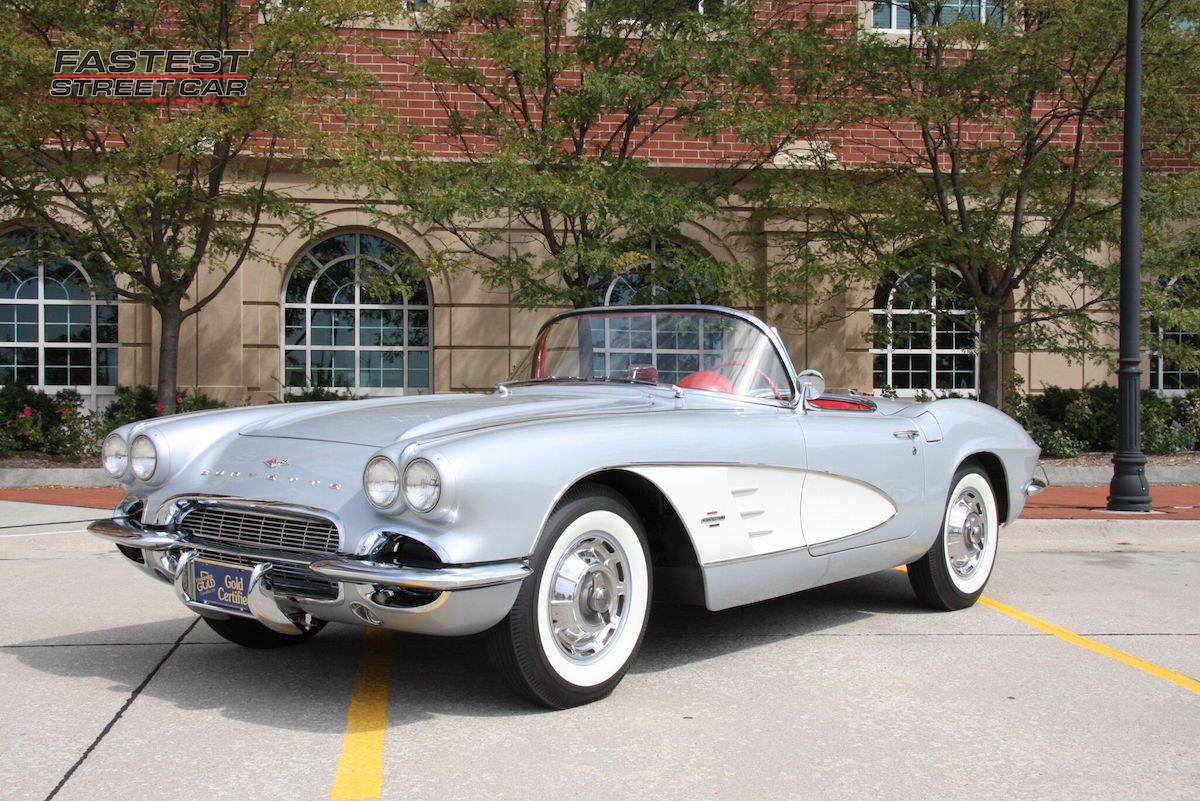 IN ADDITION TO COMPETING IN HOLLEY EFI FACTORY SUPER CARS, YOU BEGAN COMPETING IN CHEVROLET PERFORMANCE STOCK PRESENTED BY SCOGGIN-DICKEY PARTS CENTER, IN A DIFFERENT CAR, A 2017 COPO CAMARO, IN 2018.

Yes, and that car has a DR525 crate engine and I run a Turbo 400 transmission. This car is closer to stock, and to get the most out of it that we can, we do things like adjust the suspension. I double-enter at each race, and it's not hard to go back and forth between the two classes. They're both heads-up and run on a pro tree. There are some differences in the way you drive the cars, but not enough to make it difficult. It took us some time to figure out where we want to go with this class. The other guys had us covered by a little, but I think I know where we can pick up over winter. I enjoy both classes very much, but we've had more success with the Chevrolet Performance Stock car at this point. It's easier for us to figure out. It takes a while to make these cars ultra-competitive. We just haven't quite been there, but we're making some gains on everyone in both classes.

I plan to come out and be more competitive in both cars and classes. I'm a competitive person, so I'm not going out there just to burn fuel. I want to win in Factory Super Cars and Chevrolet Performance Stock and be in contention for a championship, and I want to have people open their eyes when we come to the track.

(Interview in the December 2018 issue of Fastest Street Car) 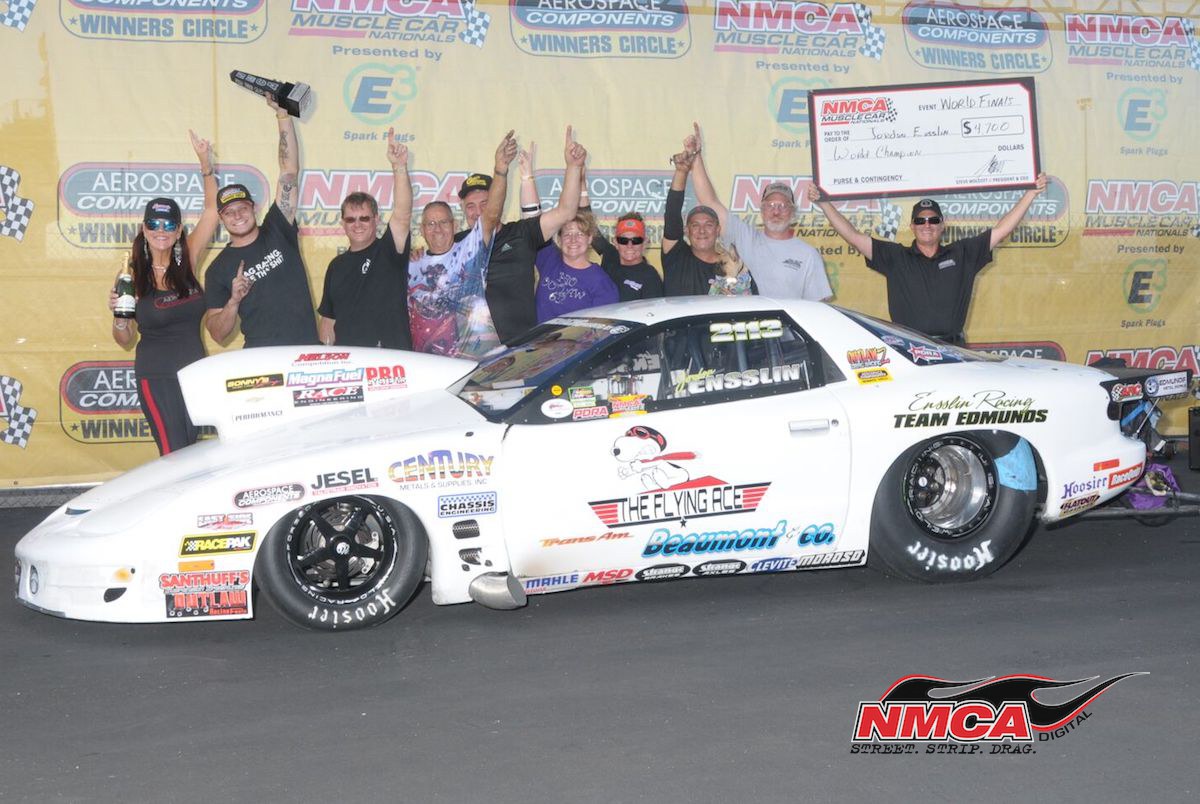