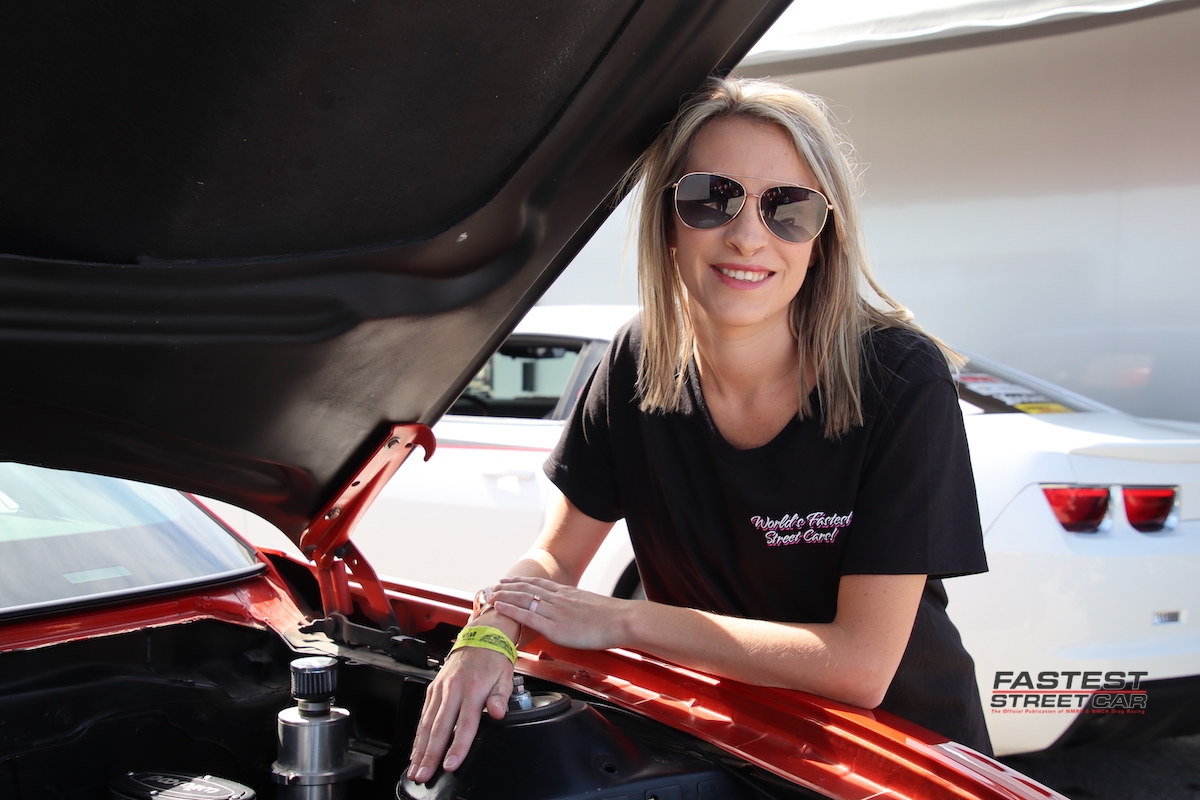 Haley Burkhammer has great memories of growing up in Hazen, Arkansas. The small town she lived in with her parents, Kevin and Christi Rounsavall, had just over 1,500 residents, and everyone knew each other. Burkhammer was on gymnastic and cheerleading teams throughout grade school and high school before going to the University of Arkansas and becoming a faithful Razorbacks football fan. While she was there, she used her experience to coach gymnastics, and soon after graduating, she became an occupational therapist and started a life with her new husband, Matthew Burkhammer.

In that time, she raced an orange Camaro that belonged to her grandfather and fellow racer, Ronnie Hackelton, and while she stepped away from it briefly to welcome her daughter, Elena Grace, to the world in 2020, she returned to the cockpit at the last NMCA race of the season in 2021. Now, she’s preparing to race in Chevrolet Performance Stock presented by Scoggin Dickey Parts Center at all six events on the NMCA tour in 2022, but rather than her orange Camaro, she’ll wheel a blue CRC Camaro that Hackelton, whom she calls Pop, is setting up for her.

Read on for more about Burkhammer, who’s excited to introduce her new car to NMCA competition beginning with the 20th Annual NMCA Muscle Car Mayhem in March at Bradenton Motorsports Park in Florida. WHAT WILL YOU SHARE WITH US ABOUT YOUR EARLY EXPOSURE TO RACING?

THAT’S A FUNNY STORY, AND ONE THAT SOME OTHER RACERS CAN LIKELY RELATE TO. WHAT WAS YOUR FIRST CAR?

On my sixteenth birthday in 2010, I got a red 2010 Camaro SS. I actually cried when I got it because I loved it so much. My dad had been teasing me by telling me that I was going to get a junky old truck, and I didn’t want any part of that. In fact, I told my cousin that if my dad really did get me a junky old truck, she could just have it.

HOW DID YOUR FAMILY PRESENT THE 2010 CAMARO SS TO YOU ON YOUR BIRTHDAY?

They told me to join them outside to take a look at the junky old truck they had bought me, but when I stepped outside, I saw the Camaro with a big red bow on it. It had a V8 engine and an automatic transmission, and I drove it through high school and in college. Unfortunately, when I was heading home for a holiday break during college, I was involved in a multi-car accident. It was a pile-up in a tunnel, and a Jeep rolled onto my Camaro, but my Camaro was built well, because my only injury was a slight concussion.

DID YOU KEEP THAT CAR ON THE STREET, OR START TAKING IT TO THE STRIP? WHEN DID YOU JOIN YOUR FATHER AND GRANDFATHER IN NMCA COMPETITION?

It was in 2014, when Pop let me race his Corvette in LSX Rumble at the event at Atlanta Dragway. It was my first big event and my first big track. When I won the first round, Regina Puckett, Kurt Anderson, Bobbi Strong and some of the other racers came over to congratulate me, and that meant so much. I had a great time racing with dad and Pop, and going to the staging lanes with them, that weekend. When I wasn’t racing, I sat in the stands and watched, and that was the first time I had ever seen a Pro Mod. I knew at that point that I wanted to continue racing in the NMCA. It was a very cool experience. Dad and Pop told me to just go out there and have fun, and not worry about being competitive right away, so that’s what I did.

I ran Pops’ orange Camaro, which had a ProCharger at the time, in Street King, and it consistently ran 9.00 in the quarter-mile. I finished second in points, right behind Al Corda, and I was fully immersed. Pop, who had moved to Chevrolet Performance Stock by that point, earned a championship, and he came to me when the season was over and asked if I wanted to run Chevrolet Performance Stock, too. I wall all for it because I wanted to run heads-up.

WHAT PLAN DID YOU AND YOUR GRANDFATHER PUT IN PLACE FOR YOUR MOVE TO CHEVROLET PERFORMANCE STOCK PRESENTED BY SCOGGIN DICKEY PARTS CENTER IN 2016?

We decided that I would race his orange 2010 Camaro with the DR525 engine, but without the ProCharger. I was sad about the fact that the car would run slower without the blower, but it was okay because I was going to be running heads-up, and it was going to be new and exciting. My first race was at the event at Atlanta Dragway, and I was so nervous because the guys who were racing in Chevrolet Performance Stock had been racing in the category for a while and knew what they were doing. The car was definitely running differently, but we had been testing so that I could get used to it, and I managed to win that event. Pop, my grandmother, Paula Hackelton, my mom, Christi Rounsaval, and our crew members, Tommy and Danny Hill, were there, but unfortunately, dad wasn’t. When I talked with him on the phone from the track, he told me how excited he was and how proud he was, and I think he was crying a little. I will always remember that.

WAS IT FULL STEAM AHEAD IN CHEVROLET PERFORMANCE STOCK PRESENTED BY SCOGGIN DICKEY PARTS CENTER FROM THERE?

Yes. It really was, and there was no looking back. I think that originally, Pop worried that I wouldn’t like the fact that the car was slower, and that we would have to change it back to its previous combination, but I liked heads-up because it meant I wouldn’t have to worry about looking behind me for my competition, getting off of the gas pedal or breaking out. Plus, I really liked the other racers in Chevrolet Performance Stock, and wanted to keep racing with them.

Matthew and I got married in 2018, and when I got pregnant the following year, I went to the races with Pop to watch him but I didn’t race. Then Matthew and I welcomed our daughter, Elena Grace, in 2020. I missed racing very much, but was focused on Elena Grace, so I didn’t get back into the driver’s seat until the last NMCA race in 2021. HOW DID IT FEEL TO BE BACK BEHIND THE WHEEL?

It was great. We didn’t get to test, and I told my husband that I felt like I was going to throw up before my first pass after two years, and he told me that it would come right back to me and not to worry. When I got to the starting line, I took a deep breath, and it did come right back to me, just like he said it would. I didn’t go rounds, but it was still good to be back.

WHAT DID IT MEAN TO YOU TO BE AT THAT EVENT, WHICH IS WHERE YOUR GRANDFATER LOCKED UP THE 2021 CHEVROLET PERFORMANCE STOCK PRESENTED BY SCOGGIN DICKEY PARTS CENTER CHAMPIONSHIP?

It was amazing, and I was so proud of him. He worked so hard for that championship, and he put in so many hours working on his car to make it run the best that it could run. We were all there to hug him, and he said that my daughter, Elena Grace, was his good luck charm.

Pop told me several months ago that 2021 was probably going to be his last year of racing, and that he wanted to turn his focus to crewing for me. He told me that he wanted to sell his Camaro and the Camaro I was racing, and get a newer Camaro for me to race, but he wanted me to tell him whether I was okay with that or not. We talked about it, and I suggested that he sell the orange Camaro I was racing but keep the white Camaro he was racing because it was ready and I didn’t want him to have to build a new car. That was our plan for a month, and then he came to me and told me he wanted to start over, and that was fine. I will say that it was hard to see them go, but he bought a beautiful bright blue 2017 CRC Camaro for me to race in Chevrolet Performance Stock, and he’s working on it now.

YOUR FANS WILL BE HAPPY TO SEE YOU RACING AGAIN. WHICH EVENTS HAVE YOU PUT ON YOUR CALENDAR?

Actually, we’re going to run all six of them, starting with the first NMCA race of the year at Bradenton Motorsports Park in Florida. We’re very excited, and we’ll do our best. My daughter, Elena Grace, will be at some of the races, too. We took her to her first race when she was ten months old, and she loved it. She wanted to watch all of the cars. I really want to thank my whole family for supporting me with all of this, and especially Pop, for building the race cars, which lets me live my dream.

WHAT ARE SOME OTHER THINGS THAT YOU AND YOUR FAMILY LIKE TO DO?

I recently left my job as an occupational therapist to be a stay-at-home mom to Elena Grace, and my husband, Matthew, works two jobs. We love to go to Arkansas Razorbacks football games, and we recently went on a family trip to Branson, Missouri, where we spent time at the Silver Dollar City amusement park. Elena Grace rode the train and the carousel, which she loved, and actually, she might be coming to all of the races with me in 2022. Would you believe that my dad is already looking at junior dragsters for her? I guess you never know. She might be racing with me one day.

(Interview from the February 2021 issue of Fastest Street Car)