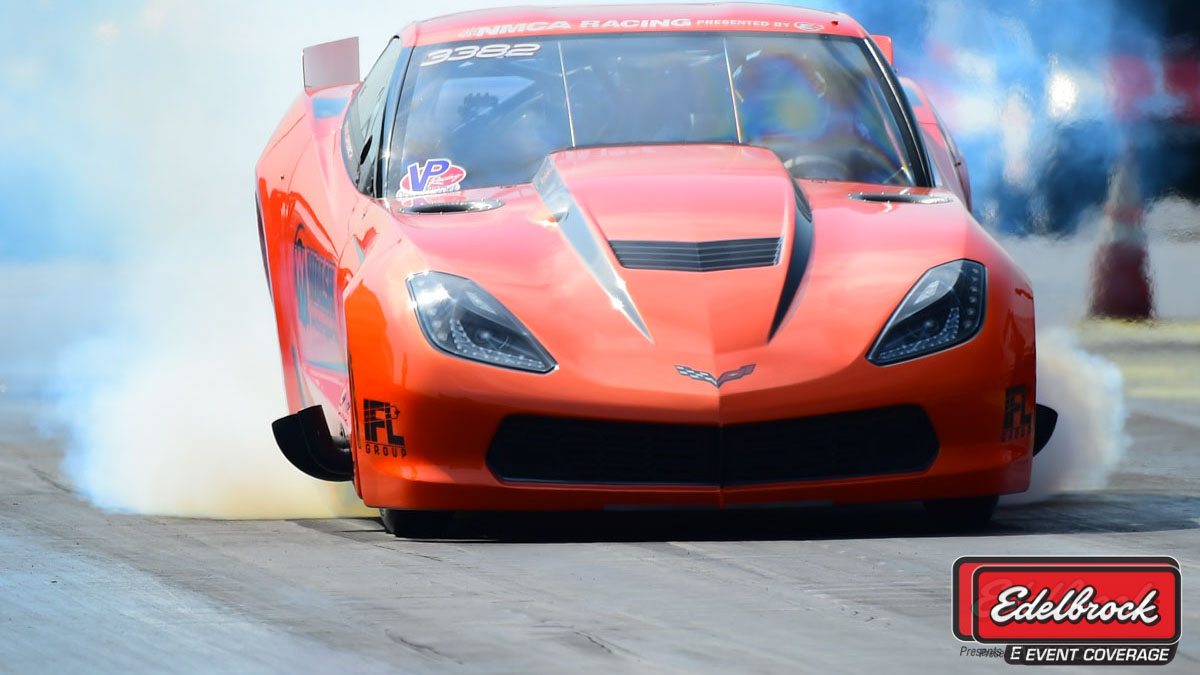 Qualifying continues today for the 18th Annual NMCA World Street Finals presented by Chevrolet Performance and at the conclusion of the first qualifying session last night, current VP Racing Fuels Xtreme Pro Mod points leader Don Walsh topped the sheet once again with a 3.735 from his twin-turbocharged Corvette. Round two of the heads-up qualifying kicks off around 11 am.

Edelbrock Xtreme Street racer Nick McGrath is coming off a victory at the recent Holley LS Fest in the Ultra LS class, but we're pretty sure his smile is all about his newborn son Cole, who's now been to two races. McGrath will be focusing his attention today on his LSX-powered, Fox-Body Mustang and improving it's qualifying position before eliminations begin.

Jim Widener and Tony Bischoff claimed the second spot on the Pro Mod qualifying sheet with a 3.737, just a few small numbers behind Walsh. The nitrous-oxide assisted Corvette has been running strong this year, with a runner-up finish at the season opener.

Bill Skillman has largely dominated the Holley EFI Factory Super Cars class this year and rolled into Indy this weekend holding a massive 1,100-plus-point lead in the championship that all but seals it up for him. His Cobra Jet Mustang sits 3rd after the first round of qualifying, running a 7.99 at 172.04 mph.

Towards the end of the day yesterday, there are a number of racers that had their transmissions pulled out. Aaron Glaser (at left) has been trying to find out what is limiting his Two-Face Pro Mod Camaro's performance, as it hasn't been running the numbers that are being called for in the tuneup. He was making some converter changes thinking that might be the cause.

New to VP Racing Fuels Xtreme Pro Mod is Tim Rickey, who after a wreck several years back sidelined his Top Sportsman split-window Corvette, has made repairs and is shaking down the car to get it ready for more Top Sportsman and Quick 8/Quick 16 shootout races. Advanced Chassis assembled the bars and Rickey relies on a 565ci big-block with two stages of nitrous. So far it's been a 4.58 on its third pass out.

Sometimes you get to the track and find out your tow rig needs a bit of work and not the race car. Such is the case with Chevrolet Performance Stock racer Jeff Heintz, who found out that his Duramax Silverado dually had worn its rear brake pads down to the bare metal. His DR525-powered Camaro on the other hand was ready and waiting for Q2.

NHRA Top Fuel Funny Car driver Tommy Johnson Jr. is on the property, not only signing autographs for fans, but competing in the Dodge // Mopar HEMI Shootout this weekend with his 2019 Hellcat Charger, which he was awarded by Dodge for being the highest finishing Dodge // Mopar driver. Johnson lives just minutes away and while he's normally at the race track under his Dodge // Mopar Hellcat Funny Car body, he'll be making some laps in his street car.

Former ARP Nitrous Pro Street racer Jennifer Brooke Rice and her father Ed Rice have stepped up their program, with their Mustang now sporting a Brad Anderson Enterprises 521ci HEMI with a pair of turbos. They're still shaking down the new combo this weekend and jumped into the VP Racing Fuels Xtreme Pro Mod class to get some track time, as they plan to run some Radial Vs. The World events and maybe some grudge or no-time races with it.

The Factory Appearing Stock Tire racers and their Factory Stock cohorts are here in Indy turning impressive elapsed times on their bias-ply tires. RacePagesDigital.com photographer Kevin DiOssi wrangled up the gang for a group photo after their first run this morning. Terry Pennington owns the orange L-88 Corvette in the center, which happens to hold the F.A.S.T. record at 9.77. Pennington broke the long-standing record at this race last year with a 9.84, and lowered it a month later in the cool, fall weather.

The Chevrolet Performance Street Car Challenge brings out all sorts of interesting cars and engine combinations. Jerry Frey of Terra Haute, Indiana, has done a bunch of work to his 1991 Chevy S10 pickup, including a fortified LQ4 LS-based engine, a custom Borg Warner 76mm turbocharger, Holley's Super Sniper EFI, and a healthy does of E85. The truck knocks down single-digit elapsed times with ease, and Frey said he'll be updating the safety equipment to keep pace with the S10's performance.

If you go to the track often enough, you're likely to see the occasional part fly off of a race car. Whether it's someone forgetting to latch a hood, pin down a Dzeus fastener or something else, it does happen. FST Carburetors NA 10.5 racer Dwight Ausmus had a big surprise at the top end when the fiberglass front end of his Firebird took flight. As a nearby spectator described it, its flight was "majestic" as it landed about 20 ft from the person's tent. From what the team can tell, the body mounts broke loose from the fiberglass, which is why it left the earth for a brief period. Racers showed up with fiberglass materials, pop rivets and more, and Ausmus noted that Open Comp racer Cameron Bowles and his friend were in the pit helping him and his crew until 2am getting the Firebird ready to race.

On display on the manufacturer's midway is "Ohio" George Montgomery's wild funny car with a twin-turbo 429 Ford Hemi under the lid. It's been meticulously restored, but we would love to see it make some hits and hear it spool up.

Walking through the pits, we found Holley EFI's Robin Lawrence chatting it up with Holley EFI Factory Super Cars driver Carl Tasca, who is currently qualified 8th after two rounds.

ARP Nitrous Pro Street racer Jim Beil is back in action here at Lucas Oil Raceway at Indy, and his Olds Cutlass has undergone some major changes to get it more competitive. Most notable is the new double frame rail chassis, which resulted not only in a stiffer frame, but also shed around 250 lbs of weight that Beil can now move around to his advantage. His 632ci big-block Chevy engine with Induction Solutions nitrous oxide assistance remains, as does his RPM Transmissions automatic and Neal Chance torque converter.

The NMCA car show is in full swing today, with cars pulling in this morning before the sun was up. Whether you like classic muscle cars or late-model speed machines, there's a little bit of everything on the property.