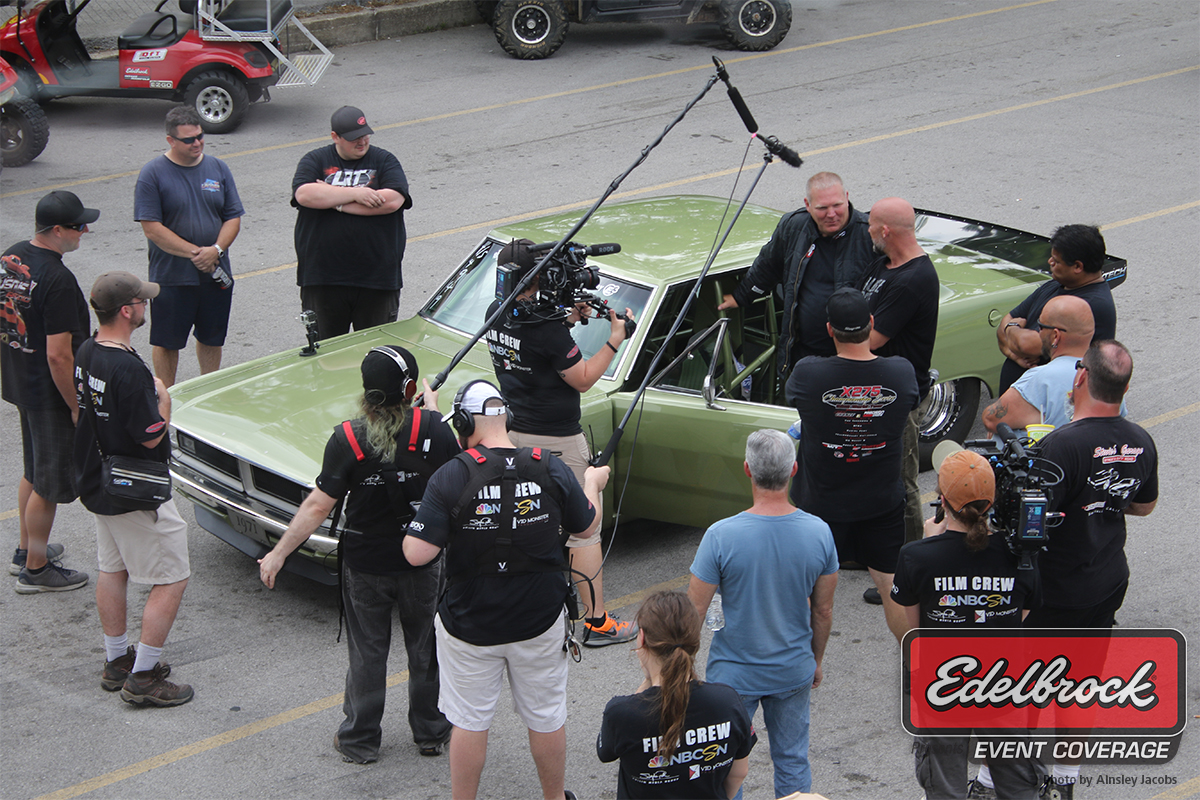 Get ready to GRUDGE RACE! This weekend, the hit TV show from PINKS and PINKS all out creator Stephen Pullin, Grudge Race with host Willie B., is being filmed LIVE on-site at Beech Bend Raceway Park. 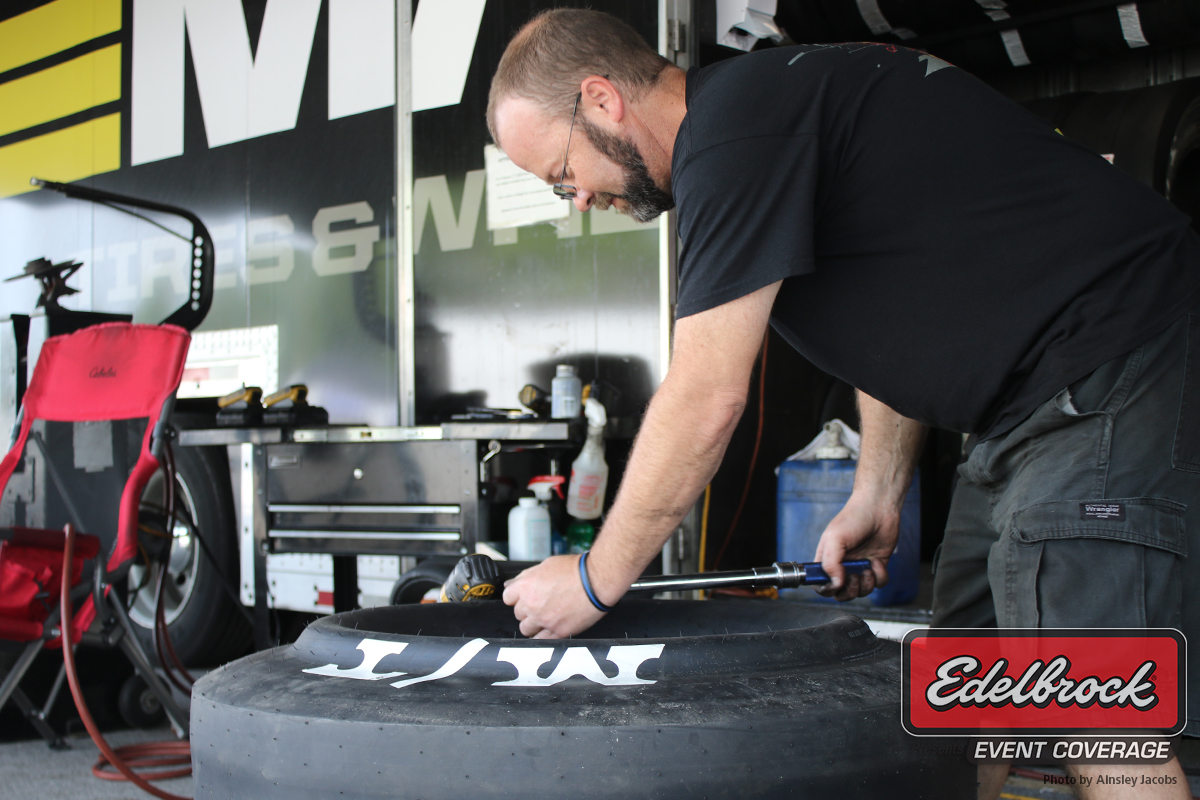 Thanks to sponsor of the Radial Wars category and longtime NMCA supporter, Mickey Thompson, for being on-site this weekend providing tire sales and service for our racers. M/T is located in the vendor midway and has staff available to answer any questions that you may have about performance, street, or even off-road applications. 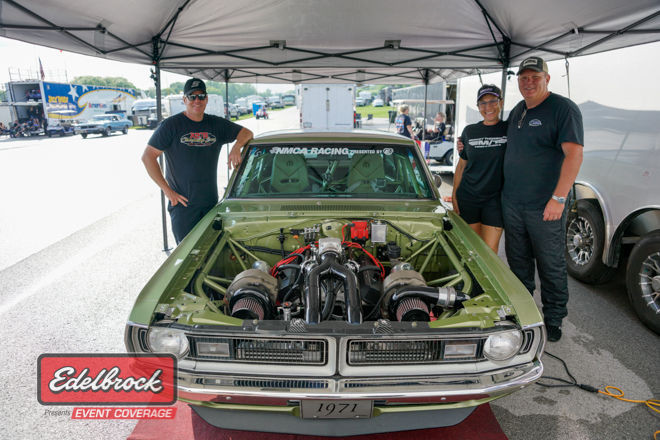 Bathed in old school coolness is Scott Funk's 1971 Dodge Dart. Funk purchased the all-original V-8 Dart, and it has since spiraled out of control. Starting with an R3 340 resto block, Funk had TyTech Performance stuff it with good parts, and topped it with a pair of eBay 76mm turbochargers. TyTech also wired up the Holley EFI among other things, and a baseline dyno pull netted around 900 horsepower at the wheels on E85 fuel. Current power output is estimated to be much more than that, and Funk is expecting the car to run high 4s in the eighth-mile here soon. This weekend, he has entered Gear Vendors True Street, and was also part of the filming of the Grudge Race tv show that is set to air on NBCSN later this year. 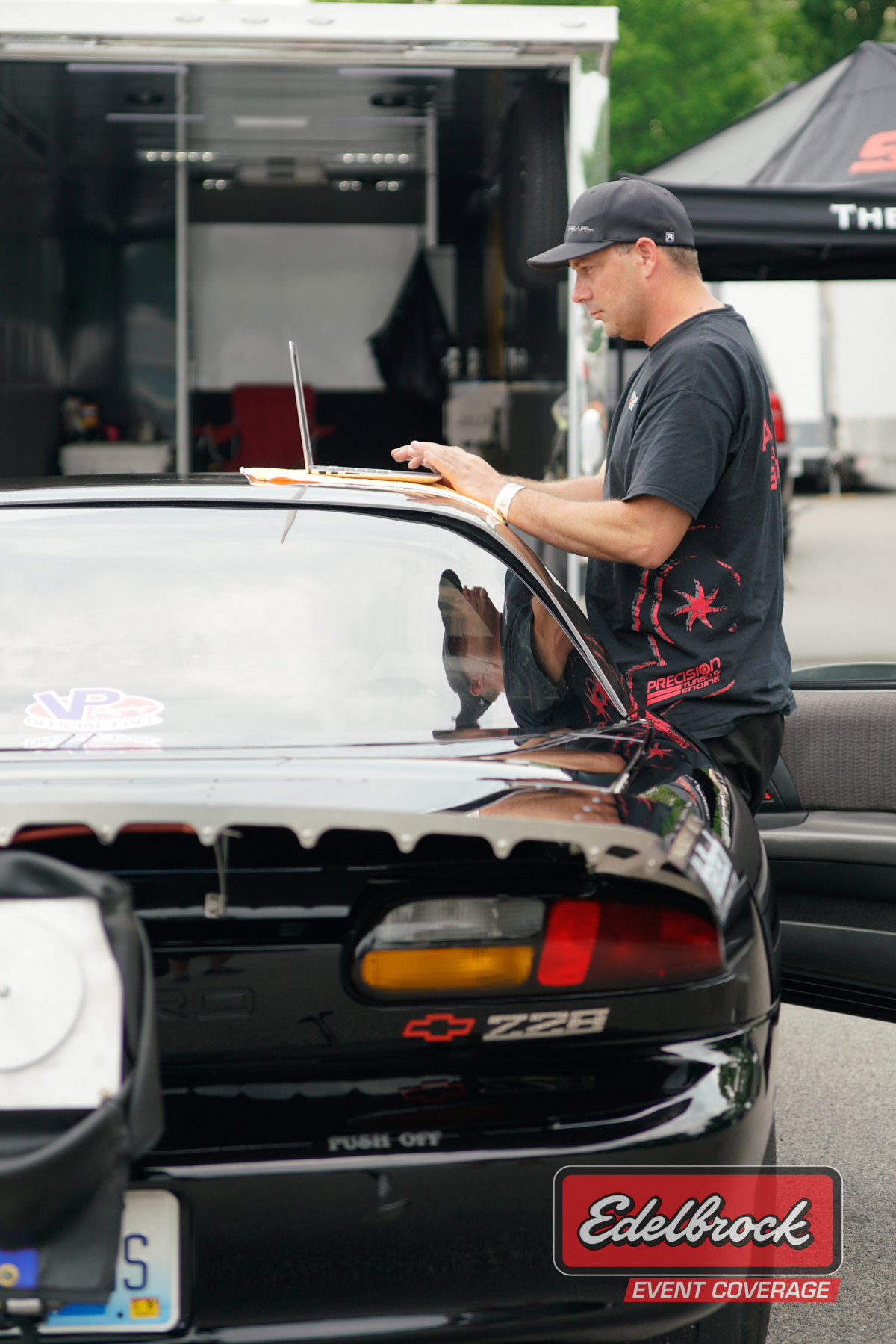 Jeremy Sullivan of Cecilia, Kentucky, is debuting his beautiful 1999 Camaro in Vortech Street Outlaw this weekend. Sullivan has John Pryor wheeling the F-body this weekend, and on it's sixth pass down the track, it's clicked off a respectable 4.88 at 148 mph. Sullivan received the Camaro as a graduation present years ago, and it's morphed from a bolt-on street car to a Street Outlaw machine packing an 85mm Pro Mod turbocharger and 427ci small-block Chevy engine. Sullivan credits his team and his better half, Chelsea, for making it all happen. 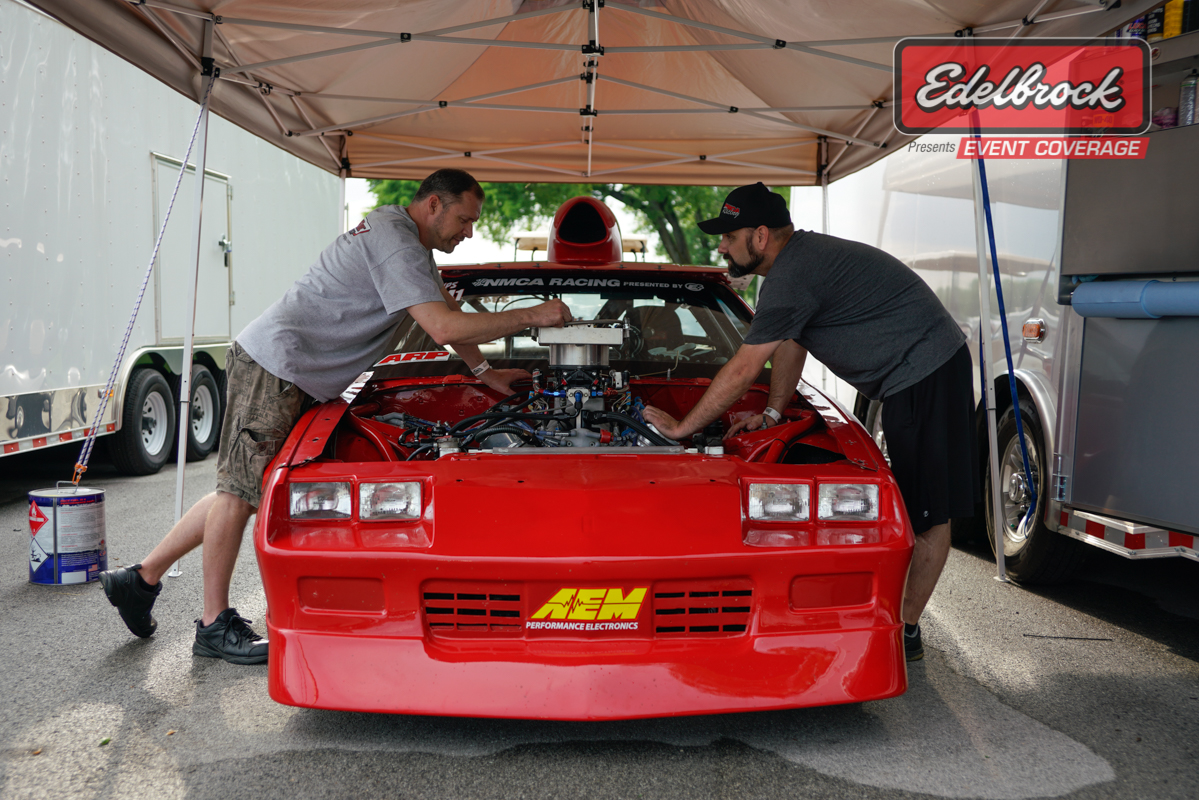 New to the NMCA and ARP Nitrous Pro Street is Brandenburg, Kentucky's Jeremy Lyons. Lyons was looking to get into heads up racing and jumped on this 1982 Camaro, which was converted into a race car back in 1987 for the paltry sum of $20,000. The Camaro still features its square tube rear chassis, and Lyons has done quite a bit of work to the car to get it where he wants it. Powering the F-body is the 565ci short-block out of Nitrous Pro Street racer John Warren's Nova, and a pair of AFR 385 heads send the air/fuel mixture from the Applied Racing Technologies nitrous system into the big-block's combustion chambers. On it's 12thpass since coming together over the last 18 months, the Camaro clocked a 4.92 at 151 mph. Lyons will be checking the AEM AQ-1 data acquisition system to see where he can improve performance. 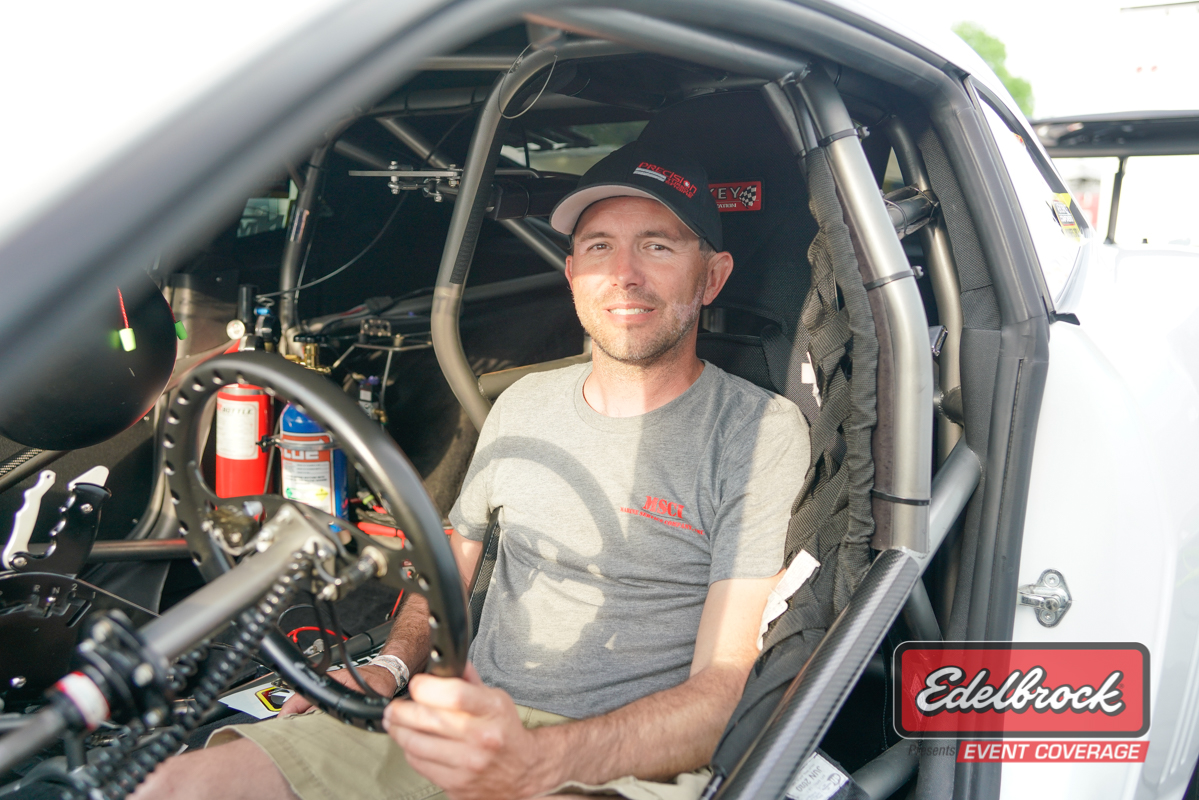 Former Outlaw Pro Mod racer Ernie Dampier of Land of the Ozarks, Missouri, took some time off from racing, but he was ready to get back into it recently and ut the word out he was looking for a turbo car. That led him to Isaac and Adam Preston who were working on Rodney Massengale's former Real Street Camaro, which belonged to Lingenfelter Performance Engineering. With the Preston's help, Dampier was able to make some fresh changes to the 2010 Camaro to improve performance. There's a new BES 365ci LS-based engine under the hood now and a new torque arm suspension in the chassis. First pass off the trailer netted a 4.81 for the Holley EFI-equipped machine, and Dampier will be looking to mix it up in Edelbrock Xtreme Street competition tomorrow. 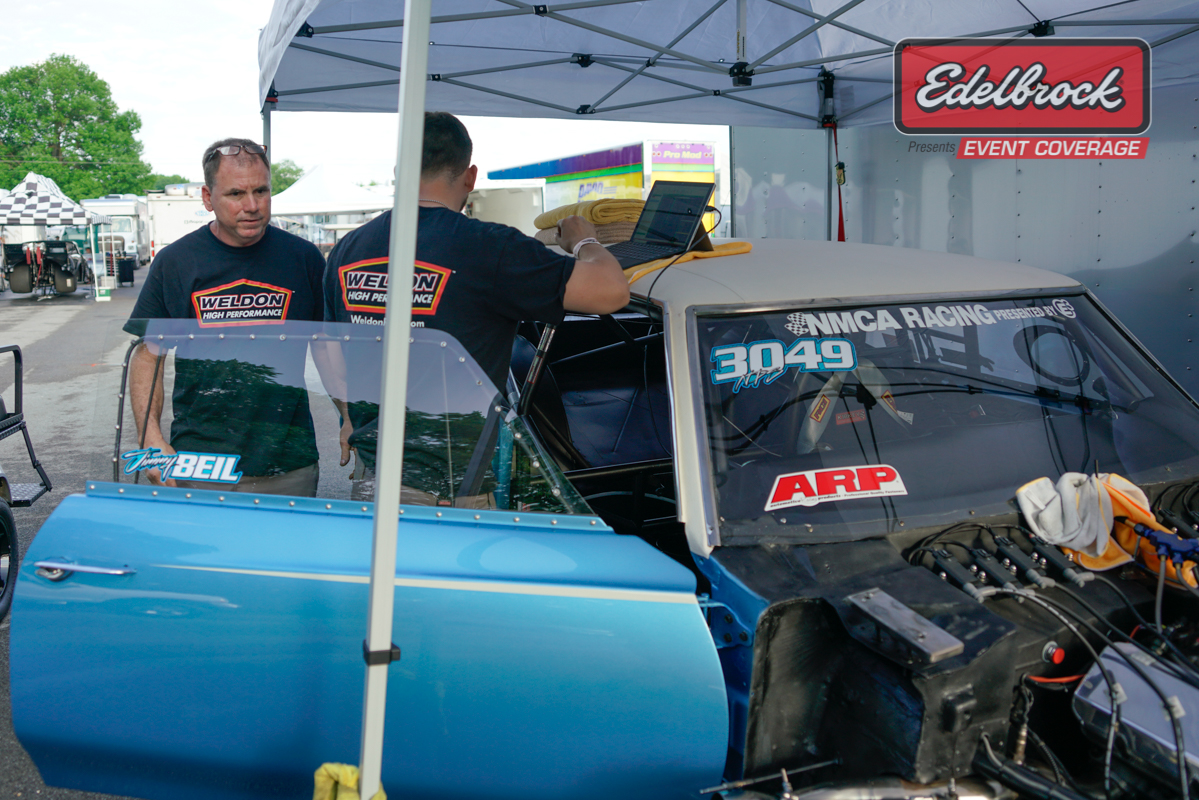 Back in action after suffering an engine in his 1970 Oldsmobile Cutlass fire last year is Jim Beil. After getting new wiring and paint, along with a trick vinyl top, the Cutlass also received a new lightweight one-piece front end. The BES 632ci engine is now managed by FuelTech EFI and the two kits of Induction Solutions nitrous oxide are ready to be put into action in qualifying tonight. 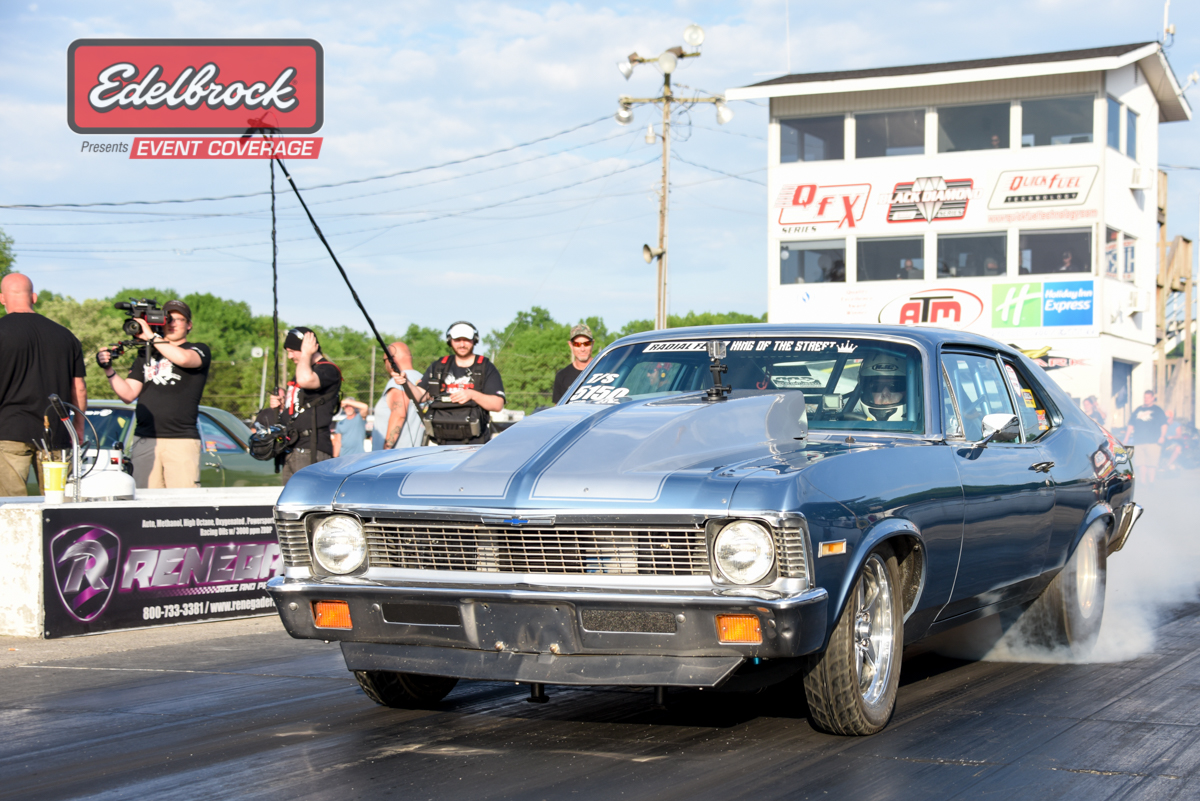 Longtime NMCA fans might recognize Jeff Knox's 1972 Nova, as it was the first to average 7s in NMCA True Street competition back in 2008. The Nova was Knox's first car that he drove to high school, and 28 years later, it's provided memories for miles. The 598ci engine is still unchanged from its True Street days, though Knox has been chipping away at his Nitrous Pro Flow system with his new Leash progressive controller. Knox is another TyTech customer and was also part of the Grudge Race tv show that took place today. We're not sure what he was running as the clocks were turned off for that, but he's expecting to click off some 7s in the quarter-mile during Gear Vendors True Street competition tomorrow. 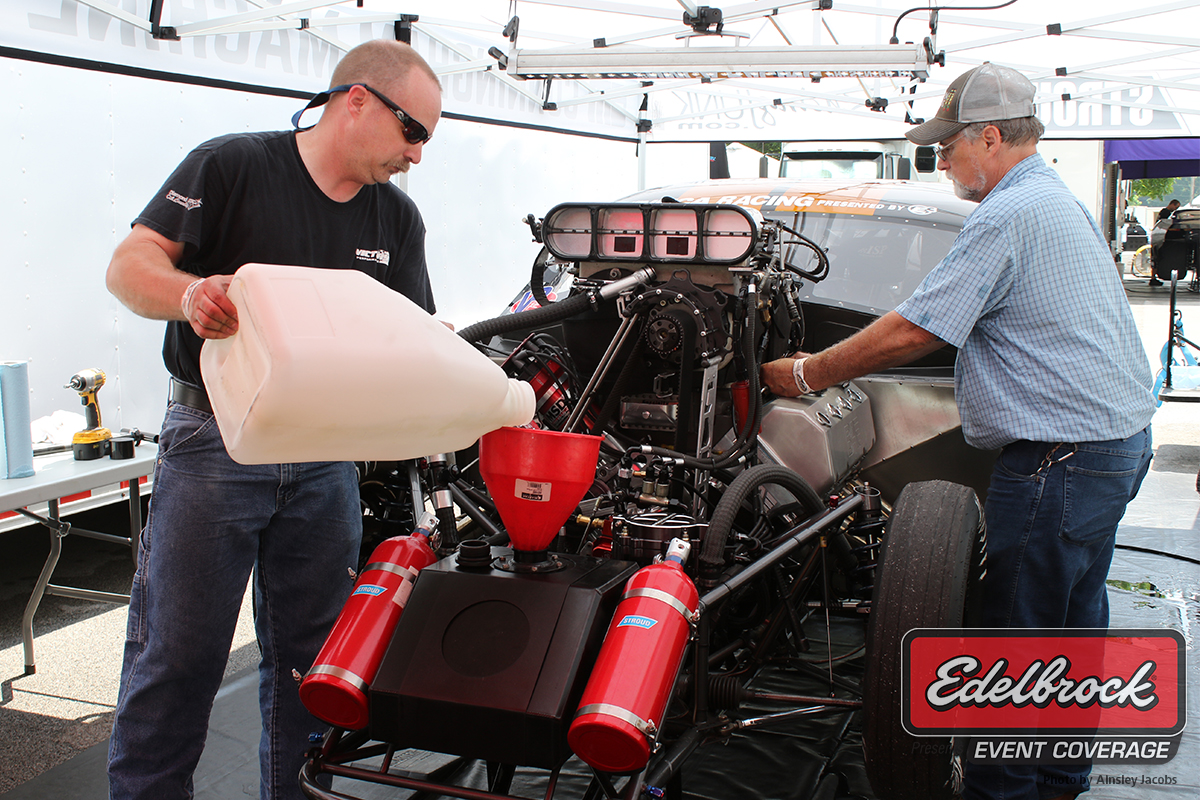 Getting his feet wet in VP Racing Fuels Xtreme Pro Mod this year is Kentucky local Tommy Cunningham (left) and his father, Larry Cunningham (right), who crew chiefs and tunes on their beautiful black and gold 67 Mustang. Although he's new to the class, he's not new to the sport, and Cunningham has put together a potent package for his Larry Jeffers Race Cars-built Ford consisting of a 526ci Brad Anderson Enterprises-built Hemi engine with a PSI screw blower on top. A Bruno/Lenco transmission backs the powerplant that puts its power to the ground through a set of Hoosier tires, and Chris Duncan helped get the tune-up right from the get go. With support from RacingJunk.com, Stroud Safety, Cunningham Machine, and Honey Service Center, Cunningham has run a personal best of 3.86 at 205 mph here at Beech Bend Raceway Park last month during the Outlaw Street Car Reunion V race (which he also won) and is currently qualified eleventh here in NMCA with a 3.96 at 190 mph hit. 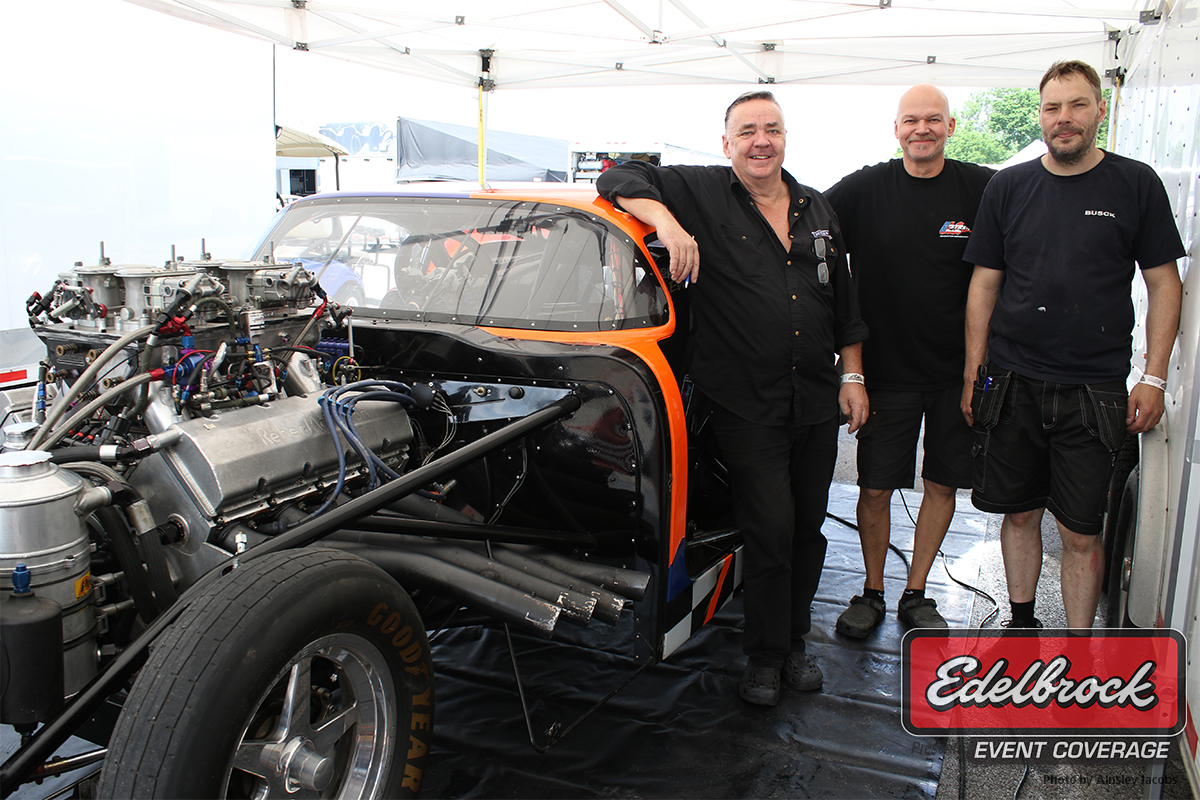 Making his way to NMCA all the way from Sweden is Mats Wicktor. His super cool 53 Corvette Pro Mod was actually originally built by Tim McAmis Race Cars here in the States, although Wicktor purchased it from a gentleman in Greece. Wicktor, who has been racing for three decades, took the past two years off from racing to save up some funds to have his car shipped over. He had intended to be racing in Bradenton, Florida, this weekend, but when that race got canceled due to rain, he hopped on the internet and decided to drive 13 hours to Kentucky for the NMCA event instead. Testing out an innovative, one-off, solenoidless Speedtech nitrous oxide system with his Reher-Morrison 875ci engine, Wicks had trouble getting off the line during the first two qualifying sessions yesterday as the car simply hooked too well. Wicks (left) along with crew men Danny Strand (center) and Peter Hellstrom (right) are making some changes to the Chevy's rear end this morning in hopes to resolving the issue. 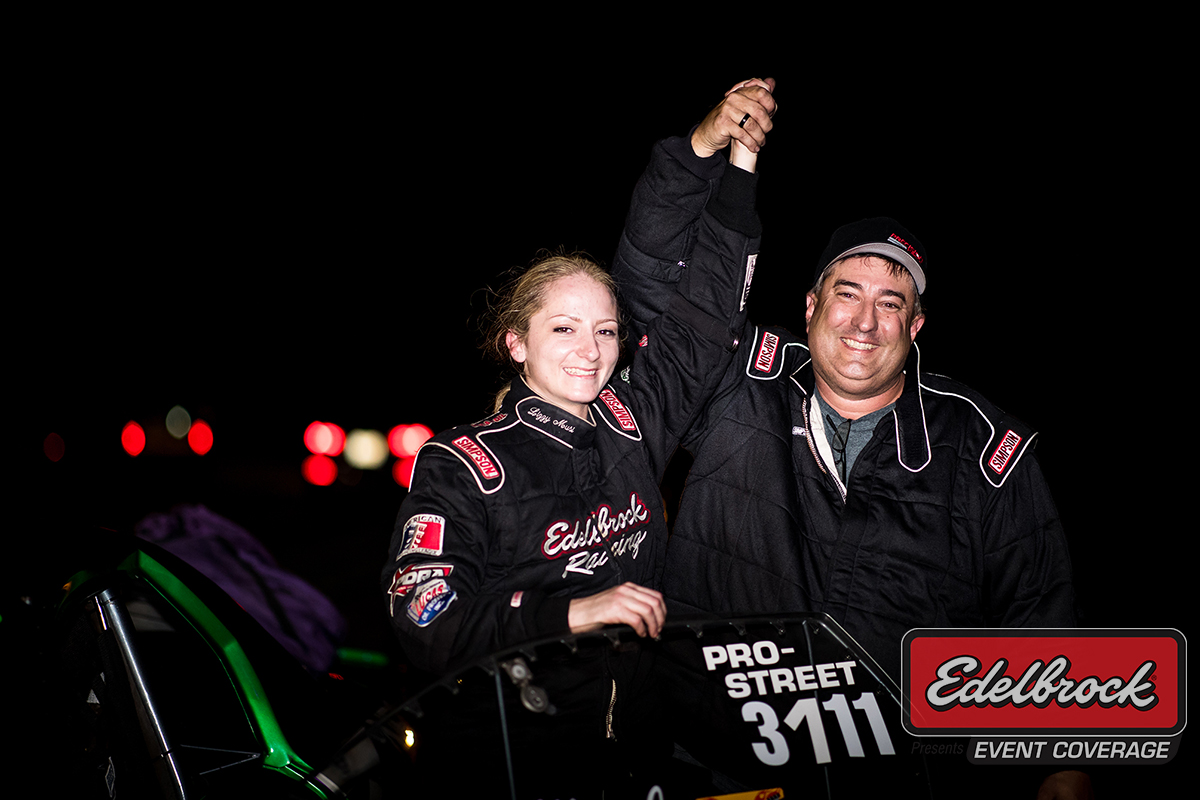 Congratulations are in order in the Bankston Boyz Racing pit area, not only because their 00 Camaro is qualified #1 in ARP Nitrous Pro Street with a 4.537 at 151.75mph blast, but also because Mike Bankston popped the question to Tricia Musi last night at the top end of the track after a side-by-side pass and the newly engaged couple couldn't be happier. 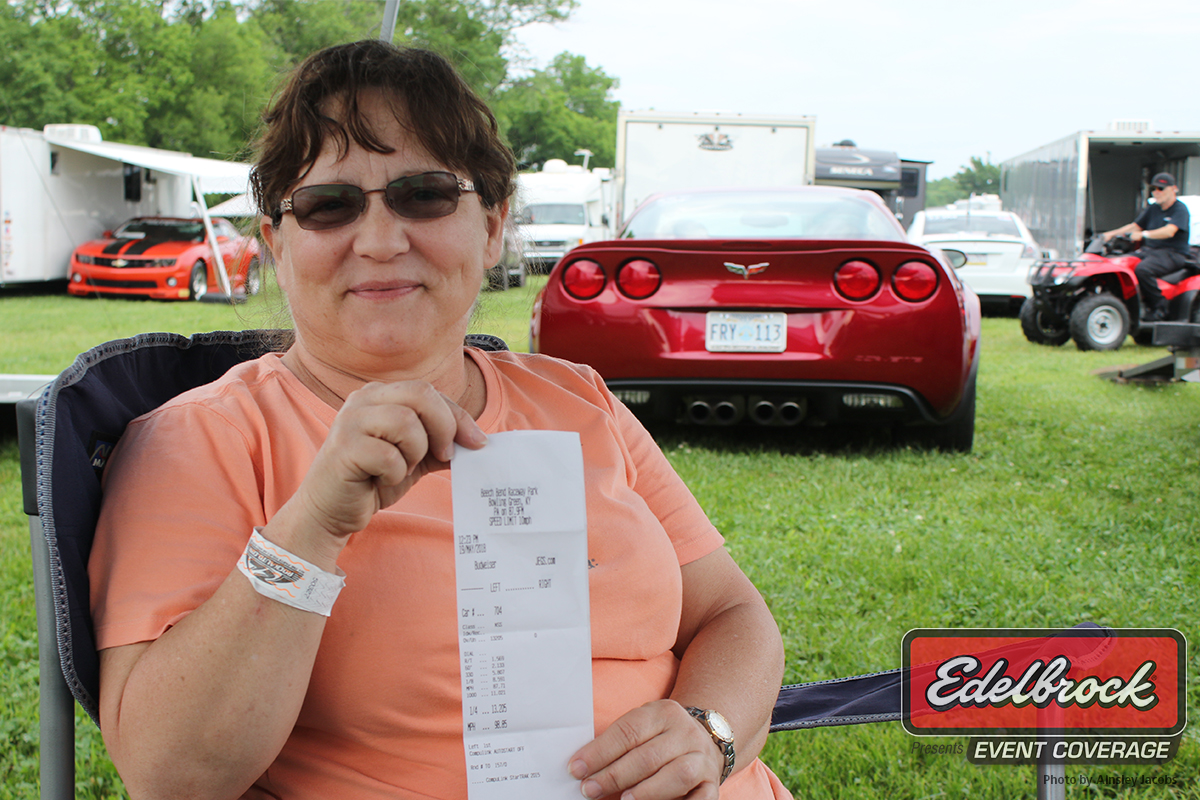 Nicholas Massengale may be known for tearing it up in Proform Rumble, but his mother, Theresa Massengale, finally jumped behind the wheel to try drag racing for herself this weekend in the Chevrolet Performance Street Car Challenge. A cancer survivor, Massengale and her husband, Dwayne Massengale, bought their 2011 Corvette Grand Sport brand new to celebrate her remission. Massengale has been having a blast learning the ropes this weekend and was excited to have finally run her first-ever pass yesterday so that she can better understand the process her husband and son go through each race. With basic bolt-ons including Kooks headers and an X-pipe, Corsa exhaust, and Haltech cold air intake, Massengale's inaugural time slip showed a respectable 13.205 at 98.85mph hit. She improved to a faster 13.514 at 101.82 on her second run down the 1,320, then chipped even more numbers off with a third pass of 12.317 at 118 mph. 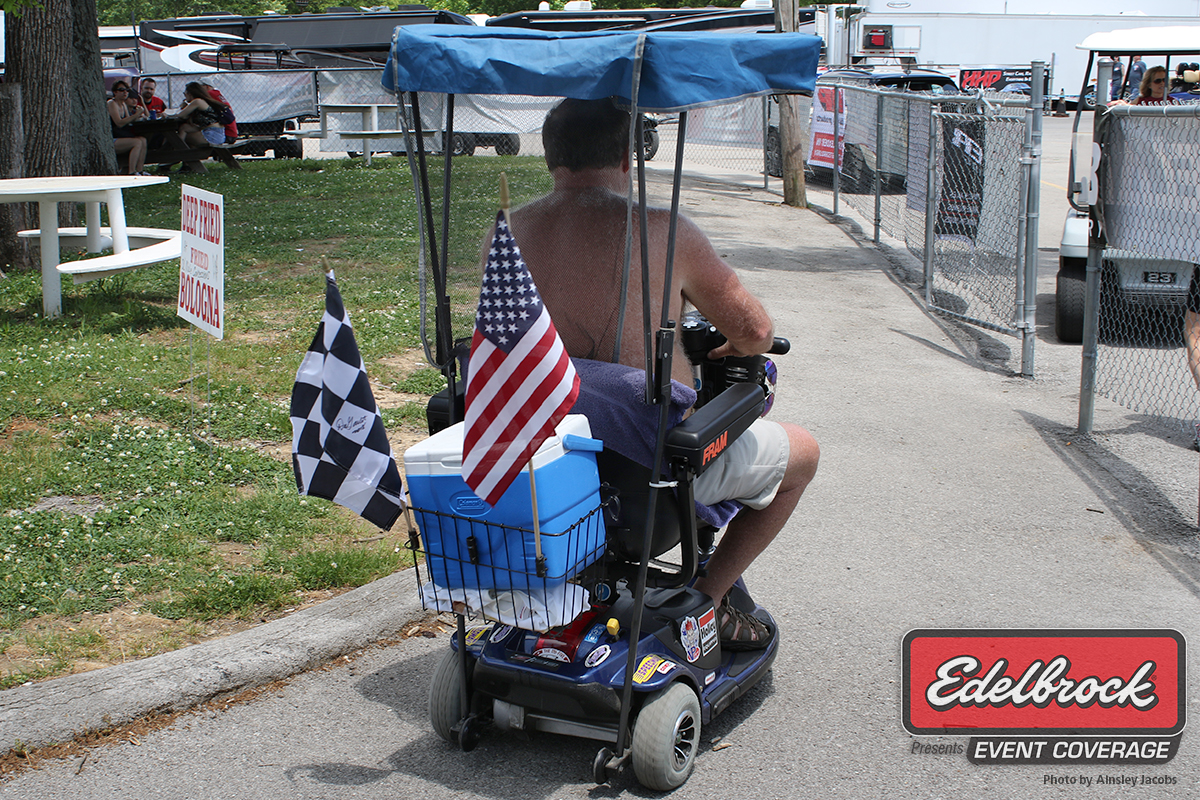 A canopy, a cooler, a scooter, and a good ol American flag. That, ladies and gentlemen, is how you do spectating right. 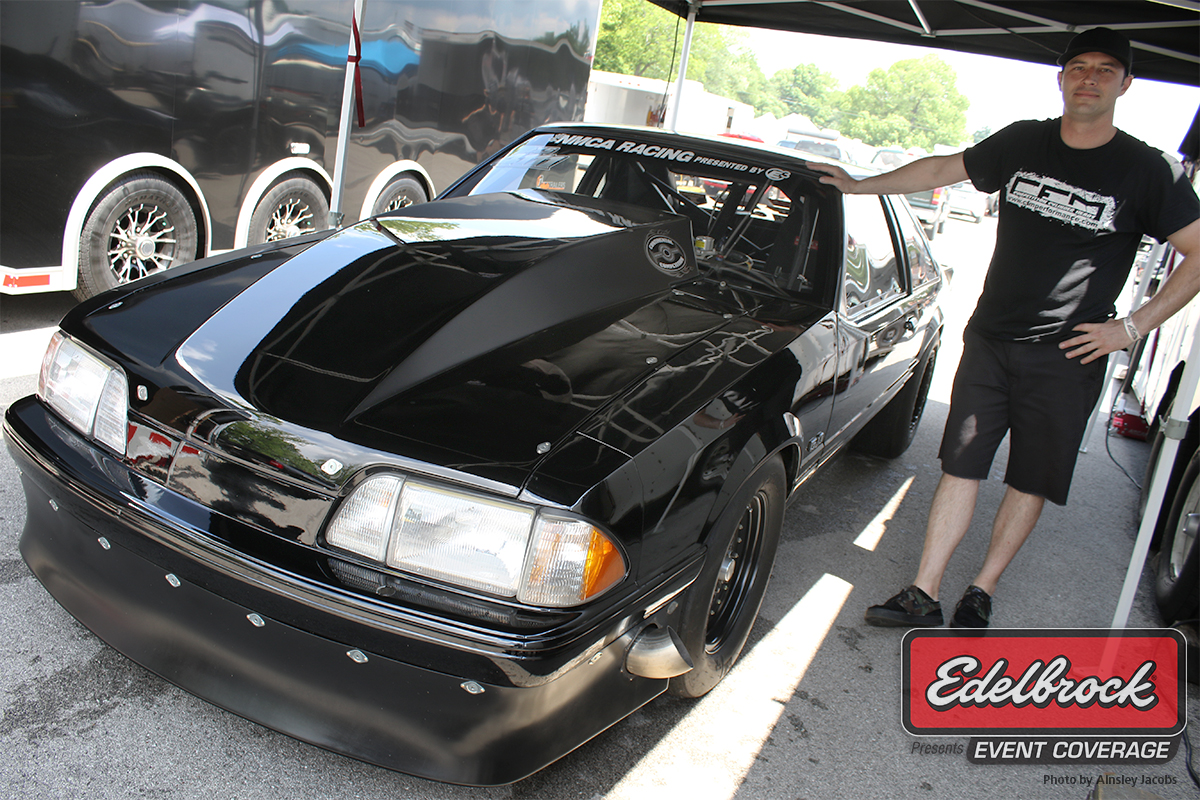 First things first Edelbrock Xtreme Street racer Bob Zelenak, would like to wish his girlfriend, Miranda, a very happy birthday today. With a new intake manifold from CFM and a rear end from his shop, Continental Competition, Zelenak is sitting fourth in qualifying on a run of 4.925 at 137.88 mph. Under the hood of his Fox body sits a small block ford with an Induction Solutions nitrous plate system and a Powerglide transmission also from Continental Competition. Nate at Cage Rage Fabrication helped out with some minor chassis work and over-the-phone tuning assistance, with Zelenak's dad, Bud, joining him this weekend. 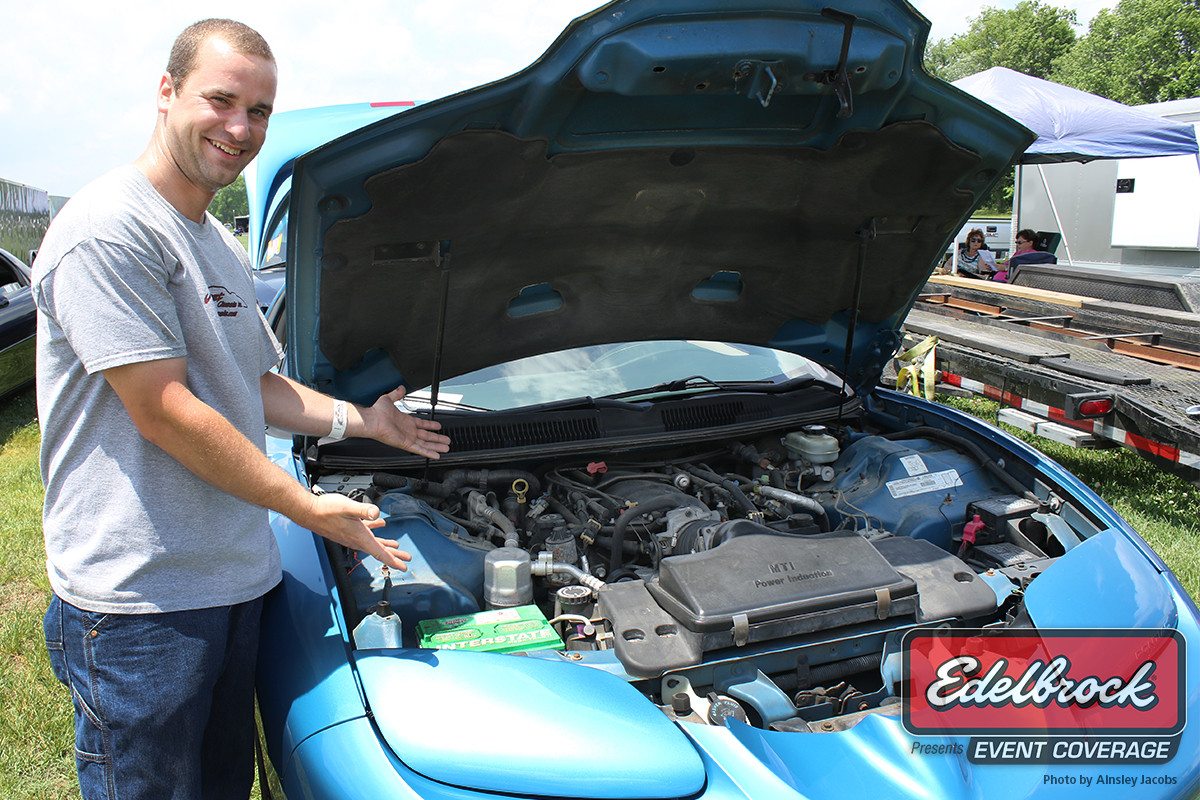 Here is Nicholas Massengale's automagic 99 Pontiac Trans Am in all its underwhelming daily driver glory. The Proform Rumble driver usually runs his 01 Camaro, but that car is currently under the knife receiving a host of upgrades including new Trick Flow heads, a solid roller cam from Cam Motion, McLeod clutch with adjustable pressure plate, and a new rear center section. Not wanting to miss out on an opportunity to run with NMCA, the Mississippi-based driver decided to go with Plan B instead and the Pontiac has been surprisingly consistent, running 13.988, 14.004 and 13.990 already. 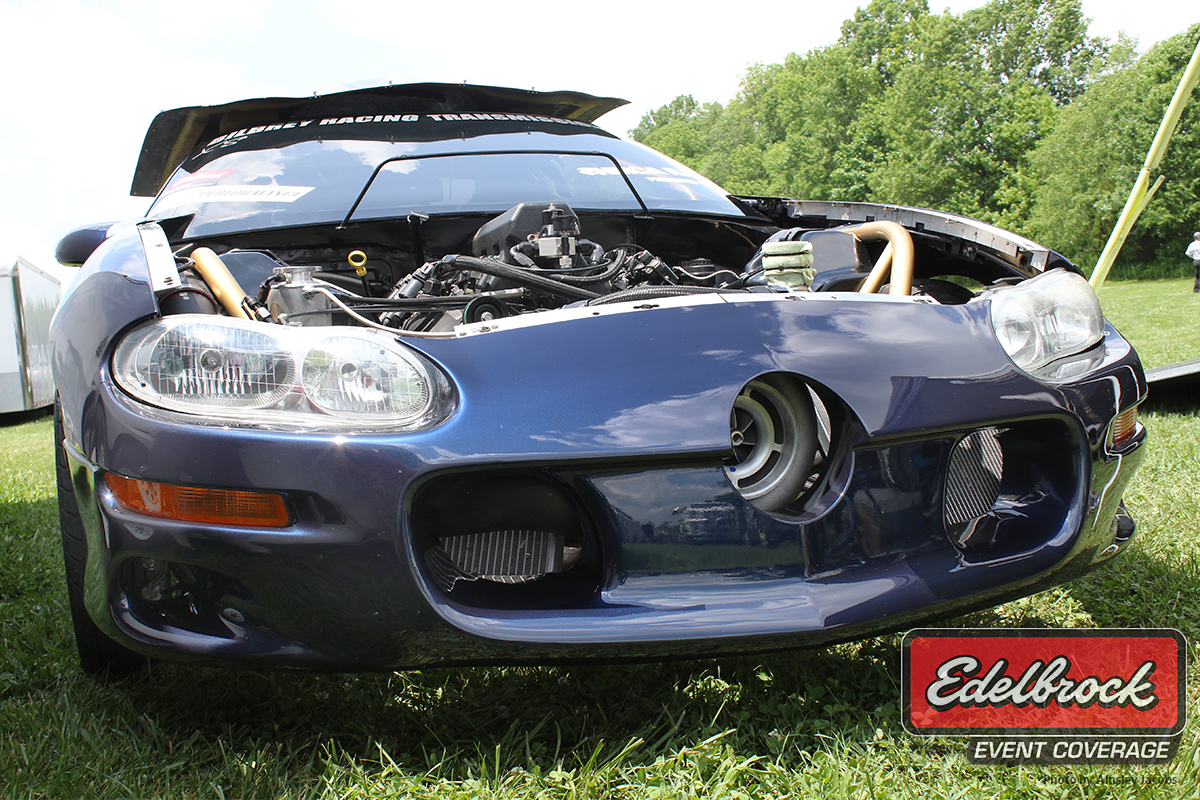 Newcomer Chris Goode of Elizabethtown, Kentucky, brought his boosted 98 Camaro out, along with his crew man Kyle Hash and crew chief Josh Cooper, for a little local fun. The street car's factory computer is tuned by Phillip smith, and it manages a Mike Lough Racing Engines-built 370 ci engine with factory-style heads and a 76mm turbo while the 2017 class champion, Jessie Coulter, assembled the roll cage. Currently qualified eighth in Edelbrock Xtreme Street with a 5.114 at 142.29 mph hit, he's run a personal best elsewhere of 5.07 at 148 mph last year with an 85mm turbocharger. 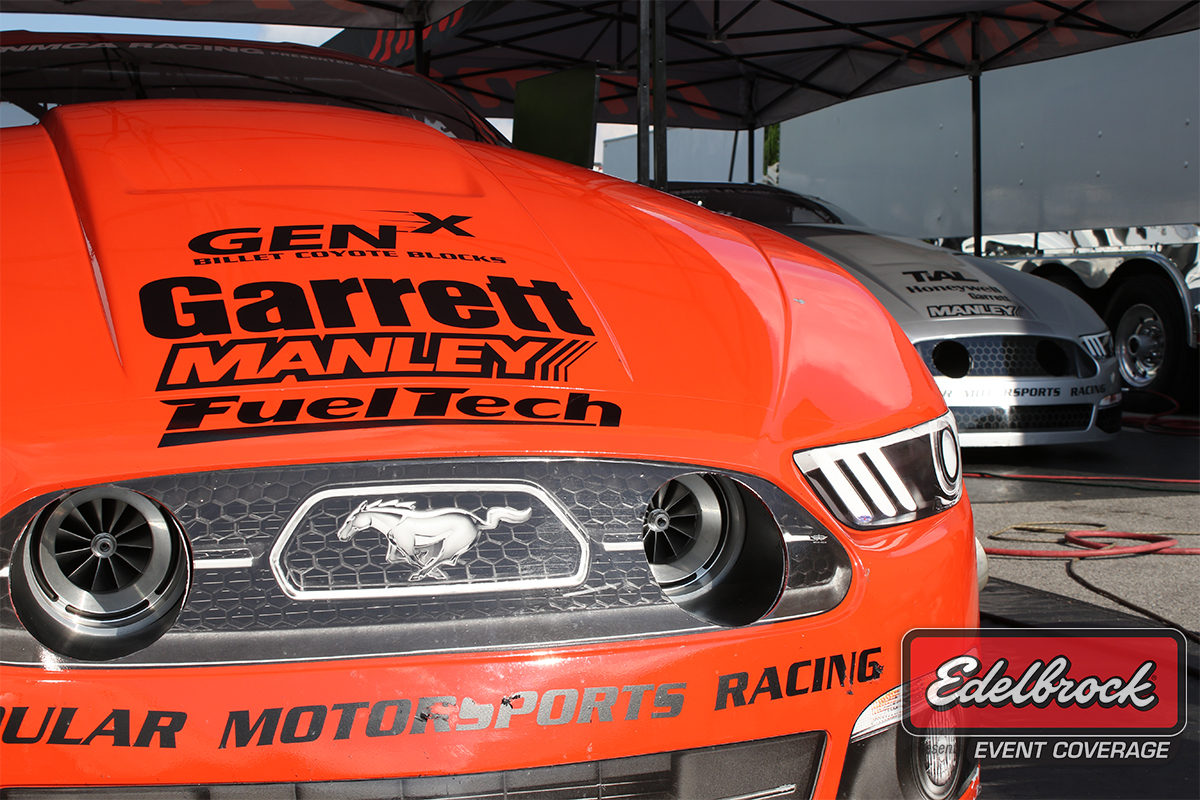 Over in the Modular Motorsports Racing (MMR) pits, Greg Seth-Hunter and Mark Luton's pair of Bro Mods, er, Pro Mods, both recently got new transmissions and converters from M&M Transmissions. Different rear gears, too, have been keeping the guys busy chasing the tunes on their Garrett turbocharged billet GenX Coyote engines but it's all been a swing in the positive direction. 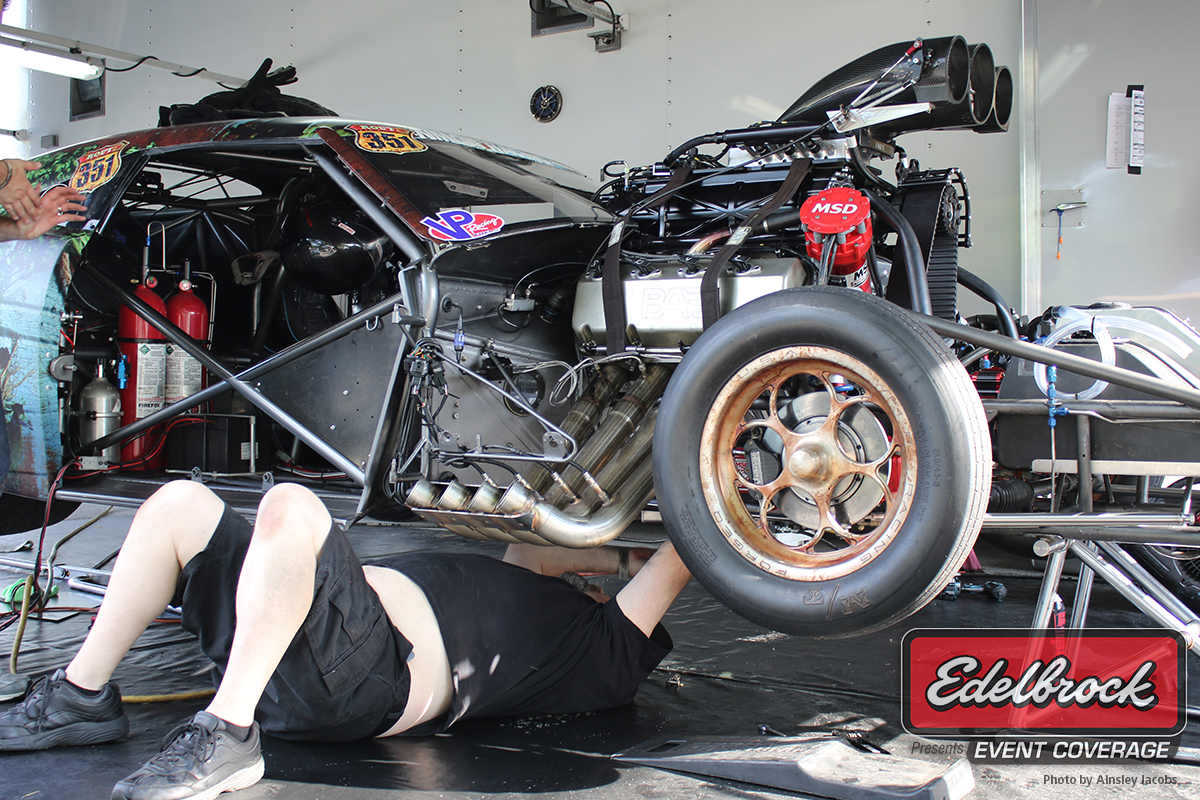 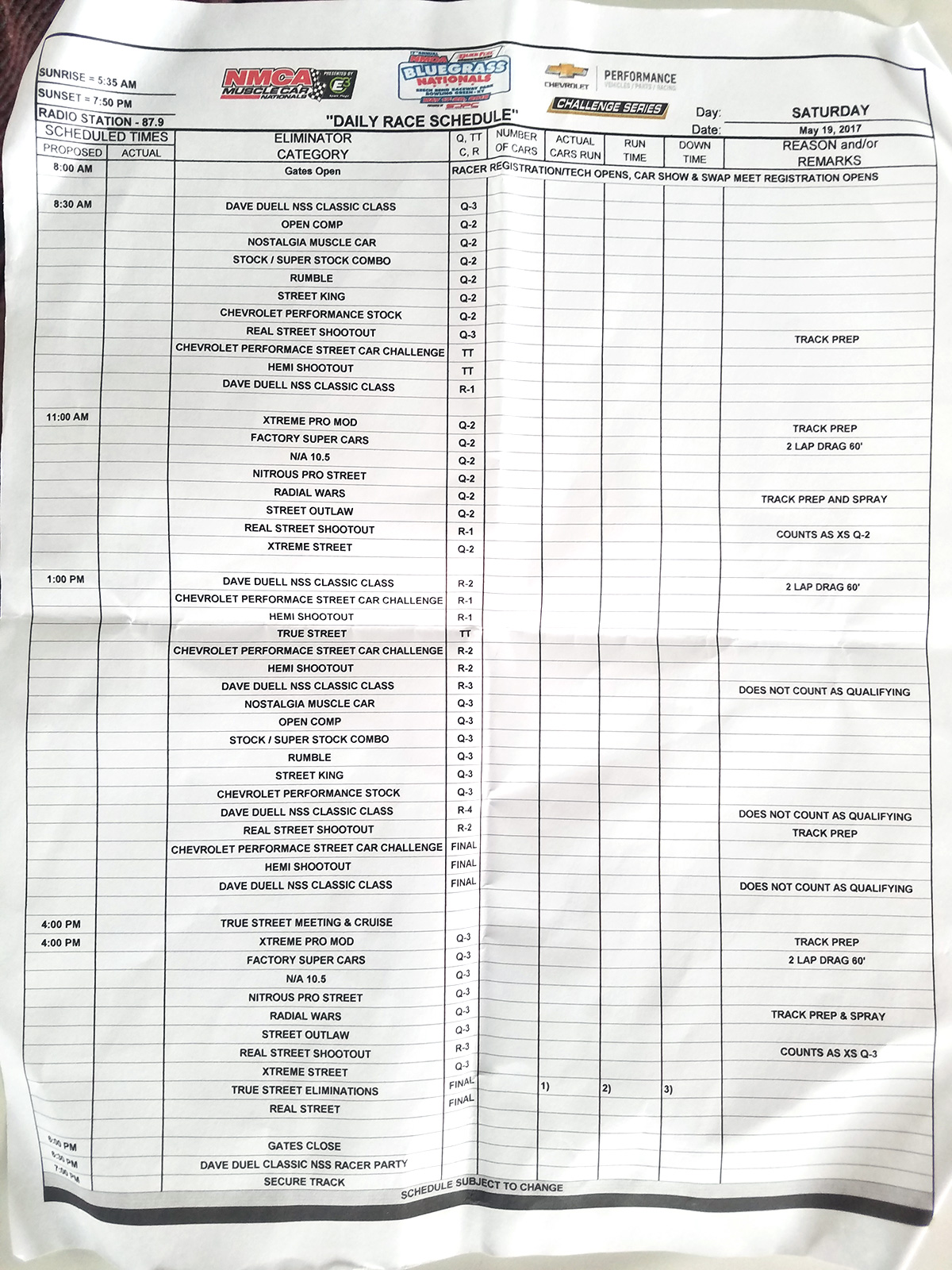