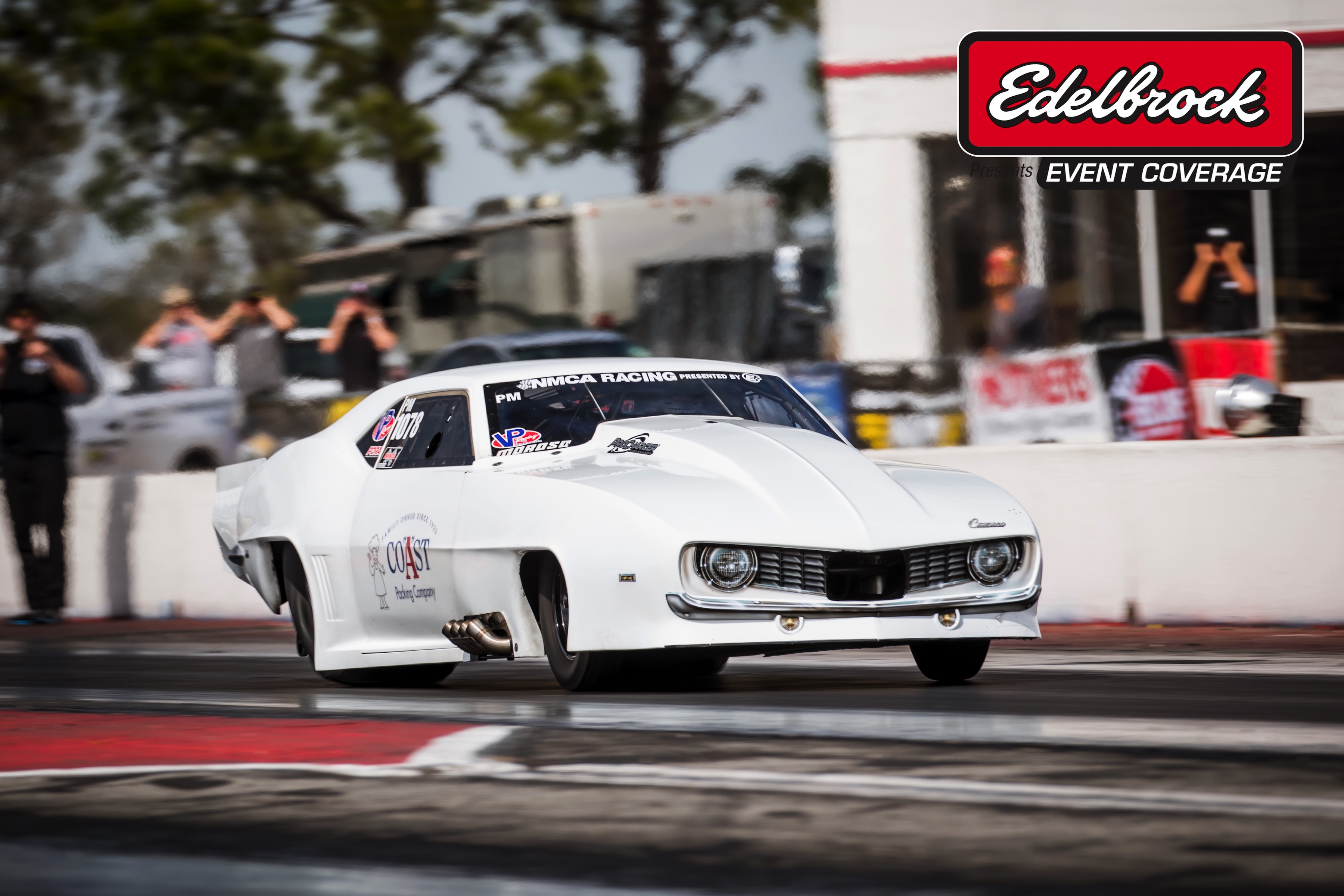 Written by Mary Lendzion Wondrous weather, powerful passes, and close competition made up the 18th Annual NMCA Muscle Car Mayhem presented by Holbrook Racing Engines, March 5-8 at Bradenton Motorsports Park in Florida. Excitement escalated as the weekend went on, and when it was all said and done, records were set and the winners of the series season opener in the Sunshine State celebrated in the Aerospace Components Winner's Circle. In VP Racing Lubricants Xtreme Pro Mod, the majority of drivers dished out 3.60s and 3.70s in qualifying, but Eric Gustafson outgunned the group with a 3.67 in his PTP-tuned Coast Packing Camaro to set the pace. The Californian cruised all the way to the final, where he clocked a 3.68 to win over Andrew Handras, who went into a wheelie and was forced to lift to a 4.09 in his Camaro.

Mustang Cobra Jets, COPO Camaros, and Challenger Drag Paks took center stage in Holley EFI Factory Super Cars, and Chris Holbrook's Mustang Cobra Jet led qualifying with a 7.66. Showing no signs of stopping, the Michigan resident, who owns Holbrook Racing Engines, made it to the final, where he lit the board with a 7.70 to win over Bill Skillman, who was 7.73 in his Mustang Cobra Jet. There were nitrous purges here, there, and everywhere in ARP Nitrous Pro Street, but through the plumes, Vince Khoury could still be seen clicking off a 4.50 in his Firebird to lead qualifying. He advanced to the final, where he flew to a 4.56 to win over Craig Cerniglia, who clocked a 4.70 in his Chevelle. Brian Keep blasted to a 4.52 in his commanding Camaro to set the pace in the energetic Edelbrock Xtreme Street, and after setting the class record, he continued his domination all the way to the final round where he secured the win with a consistent 4.54 over Troy Pirez Sr., who was forced to get off the throttle. Engines revved, roared, and revealed huge horsepower in Dart NA 10.5 presented by Diamond Pistons, and the BES-built Pontiac bullet in John Langer's Trans Am was among them. It helped him haul to a 7.76 to lead qualifying, but the final round featured Rich Nye and David Theisen. Nye, racing in memory of his brother who recently passed away, won with a 7.88 in his Mustang over Theisen, who trapped an 8.16 in his Firebird.

Ronnie Hackelton ran a 10.03 in his Camaro to lead qualifying in Chevrolet Performance Stock presented by Scoggin-Dickey Parts Center. In the final round of eliminations, Jeff Heintz won with a 10.18 in his Camaro over Keith Vaughn, who recorded a slightly better reaction time, but a slightly slower elapsed-time, a 10.34, in his Corvette. Daren Poole-Adams name topped the list in qualifying after he ran to a 9.56 on an 11.25 index in his COPO Camaro in Coan Engineering Stock/Super Stock Combo. When the final round rolled around, however, it was Pete Ricart and Andy Warren squaring off. Ricart, a former Nostalgia Pro Street racer, earned the win in his 50th Anniversary Mustang Cobra Jet with an 8.30 on an 8.29 dial-in when Warren turned on the red light in Scott Libersher's COPO Camaro. Reigning Quick Fuel Technology Nostalgia Super Stock champion Kevin Gass ran right on his 9.75 index with his Chevelle to lead qualifying in the category. However, it was Jim Netherland and Brent Wheeler who went to the final. There, longtime NMCA racer Netherland nabbed the win in his Buick when Wheeler turned on the red light in his Coronet. Tim Boggs ran right on his 10.75 index in his Chevy II to lead qualifying in Detroit Truetrac Nostalgia Muscle Car, and made it to the final to face Wesley Lee. That's where Lee lapped an 11.04 on an 11.00 index in his Monte Carlo to oust Boggs, who broke out with a 10.70. In MagnaFuel Open Comp, where .00 reaction times are routinely recorded, Terry Haynal led qualifying with a .001 in his Mustang, but the final round saw Shane Williams and Dan Caissie and their Mustangs. Williams wrapped up the win and the trip to the Aerospace Components Winner's Circle with a better reaction time and an 11.75 on an 11.72 dial, while Caissie was 10.28 on a 10.25.

Cars capable of taking a 30-mile cruise and then making three back-to-back passes down track were in the spotlight for TorqStorm Superchargers True Street, and as a special feature for this event, they were led by Drag Week winner Tom Bailey and his Camaro, and YouTube celebrity Cleetus McFarland, who was in the passenger's seat. Mike French motored to the overall win with an 8.77 average, while Jason Rollins rolled to the runner-up finish with an 8.96 average. Willard Howard was the 9-second winner, Jeff Smith was the 10-second winner, Jeff Neibarger was the 11-second winner and Grant Martin was the 12-second winner. Jose Vera took the 13-second win, Jimmy Hodges took the 14-second win and Branden Arila took the 15-second win. A special feature at all six events on the NMCA tour is the ever-growing Dodge // Mopar HEMI Shootout. At this event, Lindsay Wheelock was the overall winner with a 10.03 average, while Pete Mansolillo was the runner-up with a 10.07 average. Jay Tucker took the 10-second win, Nathan Washington emerged as the 11-second winner, Lee Segars landed the 12-second win, Brian Bednar was the 13-second winner, Dave Burnett was the 14-second winner and Tim Rickey rounded things out as the 15-second winner. The eight quickest drivers in the Dodge//Mopar HEMI Shootout came together for the Arrington Performance HEMI Quick 8 presented by Red Line Oil, and Jerry Mathis ran right on his 10.55 dial-in with his Challenger to win over Robert Sharp, who was 11.08 on an 11.06 dial in his Charger. In the Chevrolet Performance Street Car Challenge, Billy Wakefield wrapped up the overall win with a 9.07 average, while Terry Faust wrapped up the runner-up finish with a 9.12 average. Other winners included Jimmy Hartley in the 10-second category, Steve Schoenewald in the 11-second category, Jacob Segars in the 12-second category and Angel Gaulden in the 13-second category. Phil Peters put the finishing touch on the category with the win in the 14-second category. With two days of Bracket Mayhem rolled into the event, Tim Butler used a better reaction time and a 6.05 on a 6.02 dial with his Camaro to defeat Jim McMillan on Saturday, who was 5.90 on a 5.82 dial with his Regal. On Sunday, Gage Burch used a better reaction time and a 6.69 on a 6.66 dial in his Mustang to defeat Malcolm Ricks, who broke out with a 6.77 on a 6.82 in his Camaro. The NMCA thanks racers and race fans for making the season opener a success, and now, the focus turns to the second stop on the tour, the 12th Annual Scoggin Dickey Parts Center NMRA/NMCA All-Star Nationals, April 2-5 at Atlanta Dragway.
2020
,
bradenton
,
Muscle Car Mayhem
,
nmca
,
Race Wrap