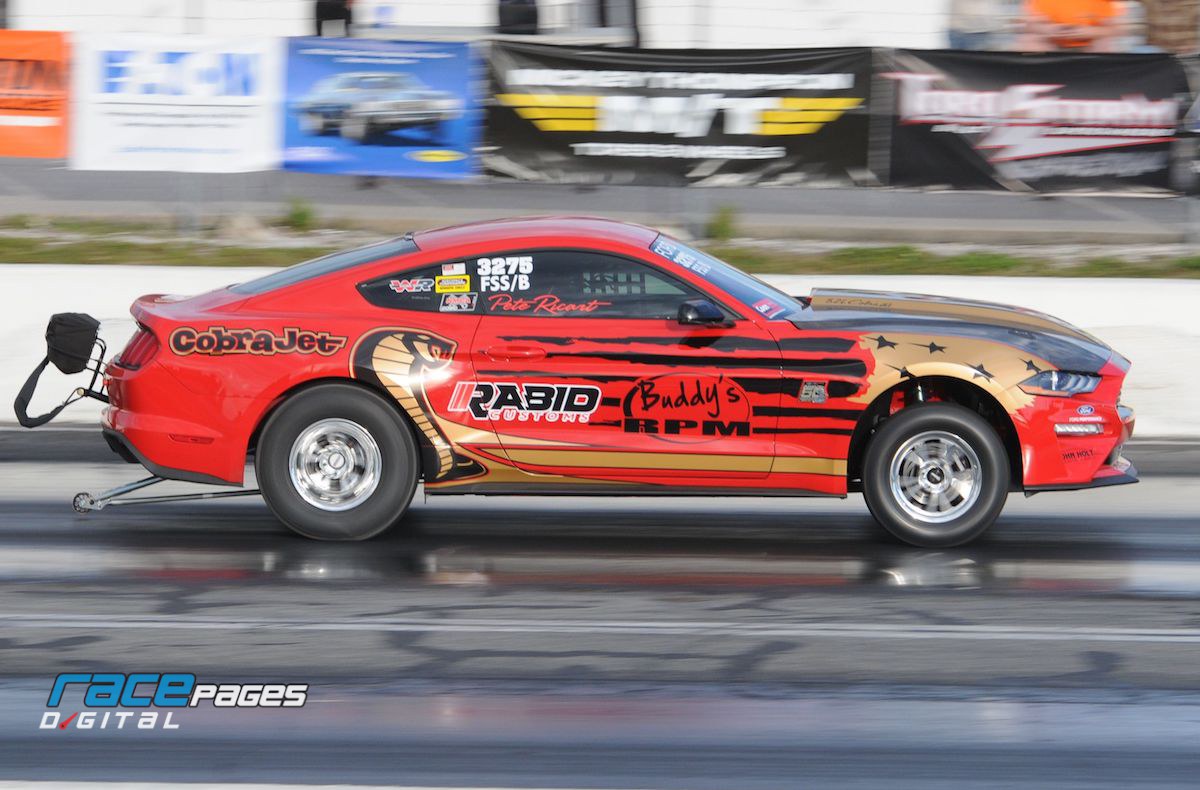 By Mary Lendzion After competing in NMCA Nostalgia Pro Street in his Fairlane, Pete Ricart took several years off to focus on his companies, Rabid Customs and Buddy's RPM in Ohio. He was happy and having fun when his life changed in an instant, as his son, Brad, was severely injured in a motorcycle accident last year. After nineteen surgeries, his son began to heal, and even began to train for a half-marathon, but on February 15 of this year, Ricart's life again changed in an instant, as his son suddenly died from a heart attack. A grief-stricken Ricart was nearly destroyed, but somehow, he became determined to live his life as his son would have wanted him to, and that meant making plans to take the 50th Anniversary Mustang Cobra Jet he took delivery of a few months ago to the 18th Annual NMCA Muscle Car Mayhem presented by Holbrook Racing Engines in early March at Bradenton Motorsports Park in Florida. Just one week before the race, I took the car to John Holt Race Cars to get it set up for weight, said Ricart. Then I went to the race at Bradenton Motorsports Park. When he arrived, he had help from Watson Racing in setting up the suspension under the car, and even his RacePak. 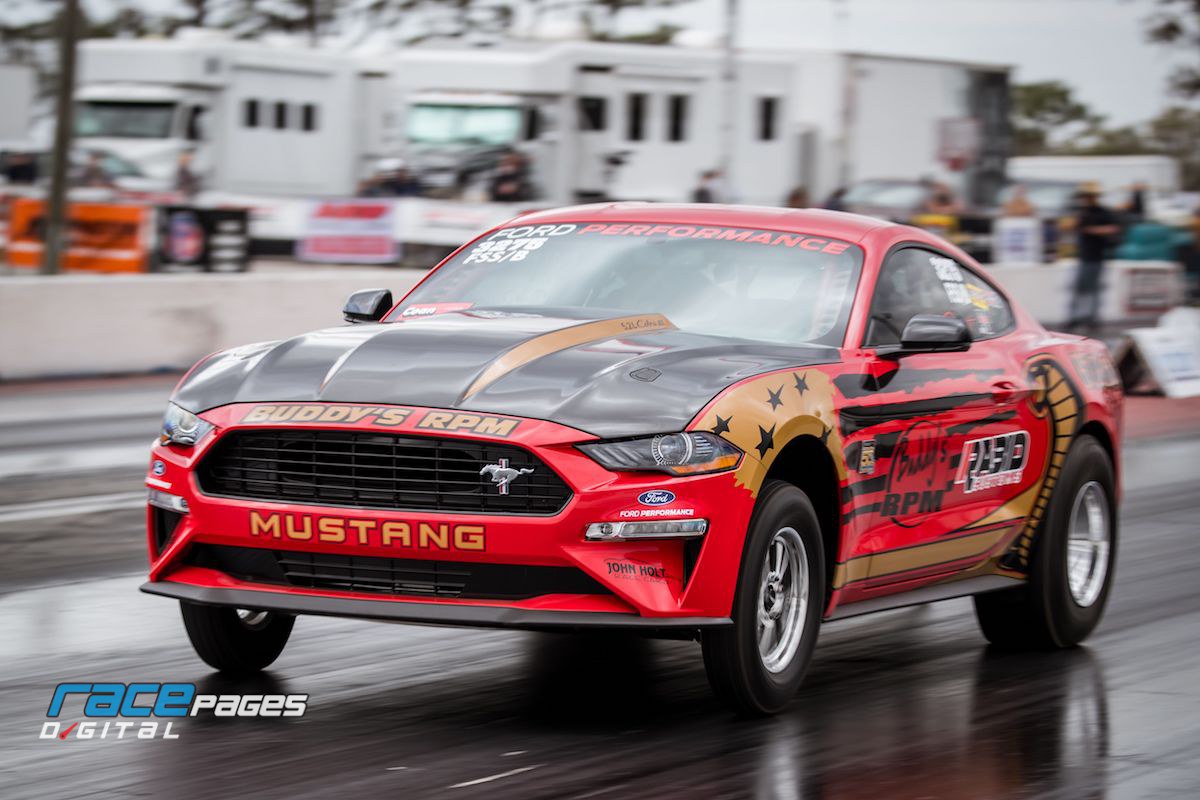 I hadn't even driven the car before I got there, so Ford Performance Parts had me run it up to 30 mph and then 70 mph several times, while occasionally turning it off to let the brakes cool, said Ricart. Then, we made sure all of the nuts and bolts were tight. Ready to hit it out of the park in memory of his son, as well as his dog, Buddy, who died just before his son, he qualified in the ninth spot in Coan Engineering Stock/Super Combo, and then posted an 8.21 on an 8.17 dial, 8.25 on an 8.24, 8.28 on an 8.26 and 8.29 on an 8.29 to win in the first through semifinal rounds of eliminations. After a few deep breaths, he headed back to the lanes to race the NMCA's winningest driver, Andy Warren, for the final round of eliminations. There, Warren turned on the red light and Ricart, who could have coasted after that, ran to an 8.30 on an 8.29 to take his trip to the Aerospace Components Winner's Circle. I knew it would be a tall order to go there and win, especially considering that the car had just come out of the showroom, and considering how tough the competition was, said Ricart. Luckily, I had a crew chief who helped me tremendously. He doesn't want me to mention his name, but he's one of the greatest crew chiefs around, and I just sat in my car while he handled everything and told me what to do. Now Leading Coan Engineering Stock/Super Combo points, Ricart is looking forward to loading up and leaving for the NMCA Power Festival, May 28-31, at World Wide Technology Raceway in Madison, Illinois. 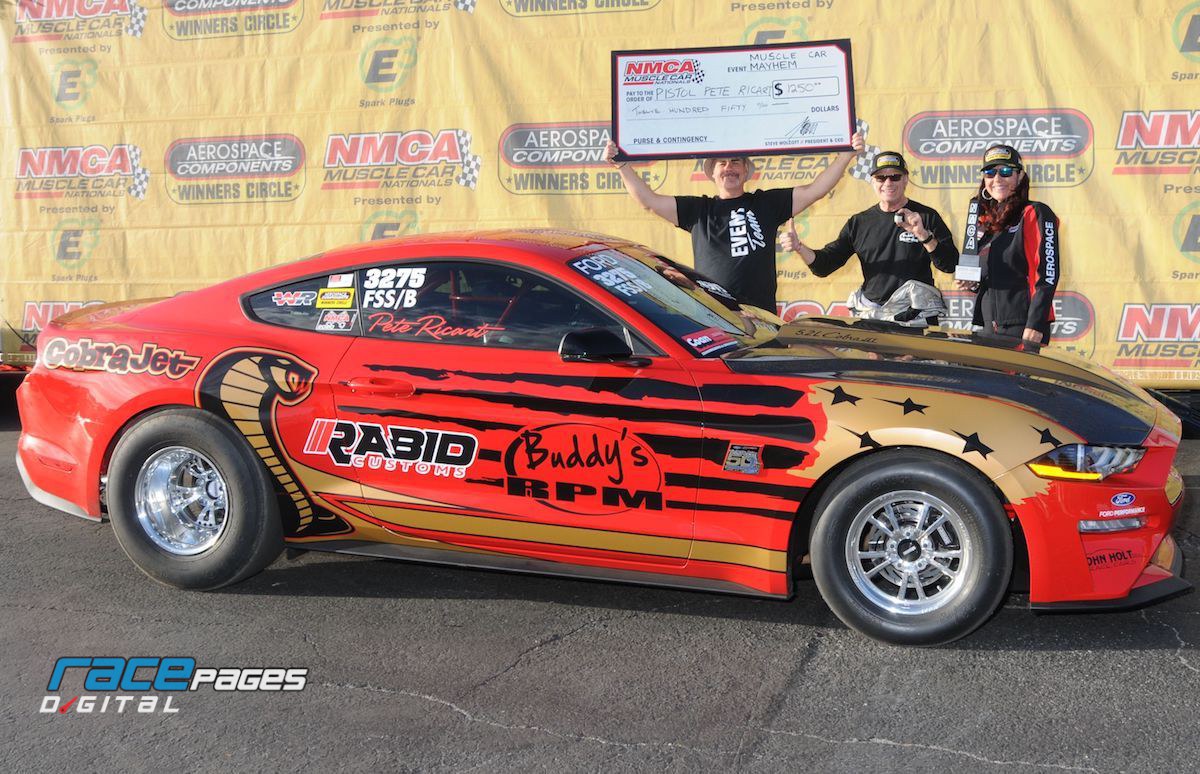