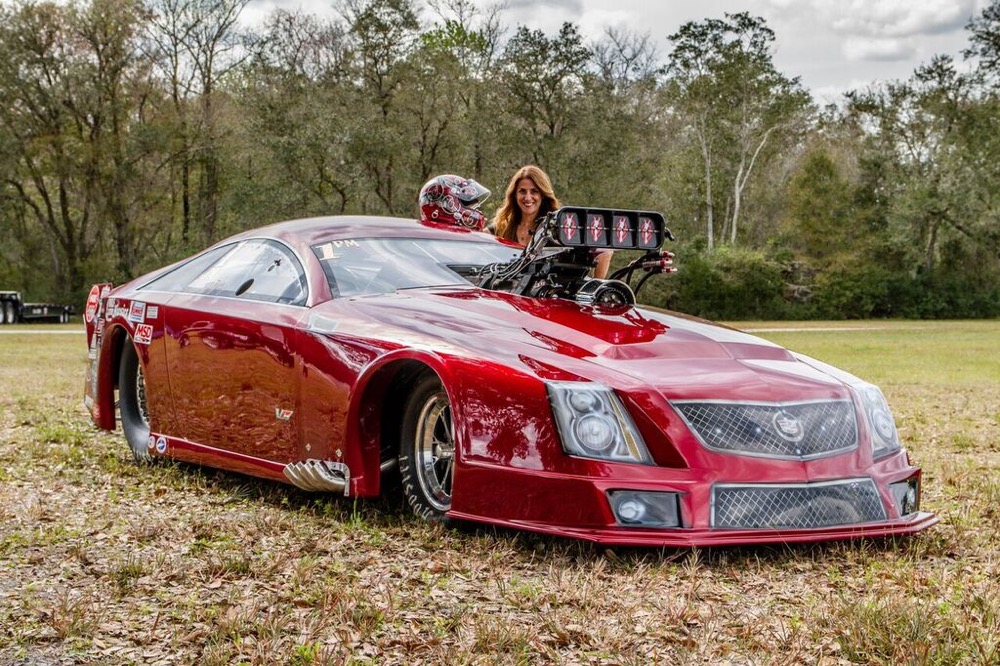 While Dina Parise treated fans to furiously-fast elapsed-times in her 2013 Cadillac CTS-V on her way to the 2015 IHRA Pro Mod championship, she's looking to add NMCA VP Racing Fuels Xtreme Pro Mod to her racing resume. Built by Matheis Race Cars, the car named Stella in honor of Parise's grandmother features a 526 cubic-inch Brad Anderson Hemi which Parise's husband, Andrew Parise, maintains. It's pumped up by a roots-style blower, and the power is transferred to the pavement with help from a Bruno with a Lenco three-speed. The cars rolls on Hoosier slicks, and the popular Parise, who recently moved from Pennsylvania to Georgia with her family, has gone from the starting line to the finish line in six seconds at well over 230 mph. I do leave the line off of a clutch pedal, and I do shift, said Parise, who was a competitive figure skater and traveled with the Ice Capades before climbing into a race car for the first time in her thirties. My husband hates when I refer to it as old-school, but it is. When we started racing Pro Mod ten years ago, we couldn't leave the line off of a button, but things have changed. I know auto-shift transmissions are popular, but I like to have something to do. While Parise attended the IHRA season-opener in early March, she and her team faced mechanical issues that prevented her from qualifying, but she still'showcased her car in her pit area for fans who wanted to see it. Now, Parise, who's supported by NGK, CRC, Lucas Oil, Eastwood, Hussey Performance, Crank It Media, DJ Safety, SpeedWire and Hoosier, is hopeful that her combination will be sorted out in time for the 8th Annual NMRA/NMCA All Star Nationals Presented By Miller Welders, April 7-10, 2016, at Atlanta Dragway in Commerce, Georgia. We had so many issues crop up that we want to nail them down before we hit any other races, but we're trying to make NMCA Georgia, said Parise. We'd like to be there. (Photos courtesy of Dina Parise; lead photo taken by Killer Instinct Photos)