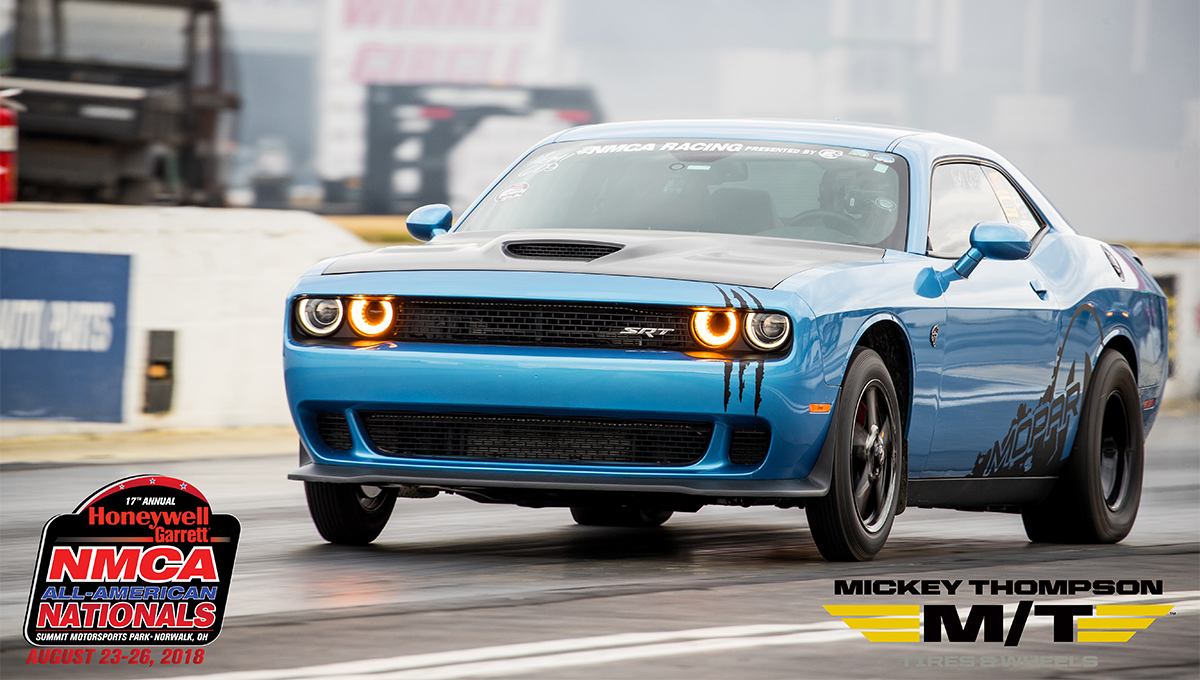 There is no denying that the modern muscle cars have helped launch the new golden age of performance. Joining the new versions of the Mustang, Camaro, and Challenger are 11-second Jeeps and high-powered sedans from mainstream badges and luxury brands. To celebrate the modern horsepower wars NMCA is teaming up with Mickey Thompson Tires to host a racing category directly aimed at those ranks Mickey Thompson Heavy Street and it is slated for competition during the Honeywell Garrett NMCA All-American Nationals at Summit Motorsports Park (Norwalk, OH) August 23-26, 2018. Open to IRS-equipped modern muscle cars, all vehicles must tip the scales at a minimum of 4,000 pounds, reflecting the massive curb weights of new vehicles. Heavy Street is open to 2015-newer Mustang, 6th Gen Camaro, 2005-newer Challenger/Charger/Magnum/300C, as well as modern high-performance sedans such as the CTS-V, Chevy S/S, and even the gone but not forgotten Pontiac G8. The focus is on cars in street trim so no gutted interiors or lightweight race seats'real cars, not gutted racecars with weight piled in it. Under the hood, all is fair provided the original engine platform is intact Gen III HEMI for the Dodge/Mopar crowd, LT or LS powerplants in the GM contingent, and of course the Coyote powerplant for the Mustang. Blowers, turbos, and nitrous are all welcome individually or all stacked on top of each other and OEM-equipped transmission for the year/make/model is required. All cars must utilize a minimum rear wheel diameter of 17-inches and run on DOT-approved tires.

We have seen a tremendous amount of sales of ET Radials for 17-inch and larger wheels, so we know enthusiasts are excited about racing their late-model cars, commented Tom Kundrik, director of motorsports at Mickey Thompson Tires. He continued, Heavy Street gives those cars a place to race and compete against similar cars. Leave the lightweight Fox-body Mustangs at home because this is all about modern warfare on the drag strip with the latest cars coming out of Detroit. The winner will walk away with $1,000 to win. We are using a different type of format for Heavy Street. The class will run as a heads-up eliminator but there will be no qualifying ladder, commented Rollie Miller, general manager and event director of NMCA. He explained further, competitors will make three qualifying runs to get their car tuned up but not formally put on an elimination ladder. The pairings on Sunday will be randomly selected using chips pulled from a hat, much like we do in Outlaw True Street and No Time competitions. The times will be shown on the board so racers and shops can brag about their performances. For more details on rules, visit www.NMCAdigital.com. The NMCA Drag Racing Series, presented by E3 Spark Plugs, is the second largest drag racing sanctioning body and is known as The World's Fastest Street Cars. Supported by top engine and chassis builders from around the country, Xtreme Pro Mod is the ultimate door-slammer class that features heads-up Nitrous vs. Turbo vs. Blower big-tire action. VP Racing Fuels Xtreme Pro Mod is part of NMCA's heads-up lineup that includes Mickey Thompson Radial Wars, Vortech Superchargers Street Outlaw, ARP Nitrous Pro Street, Edelbrock Xtreme Street, Holley EFI Factory Super Cars, ARP N/A 10.5, Chevrolet Performance Stock and other power-infused categories. For more information about the NMCA Drag Racing Series, visit www.NMCAdigital.com
17-inch Drag Radials
,
Mickey Thompson Tires
,
nmca