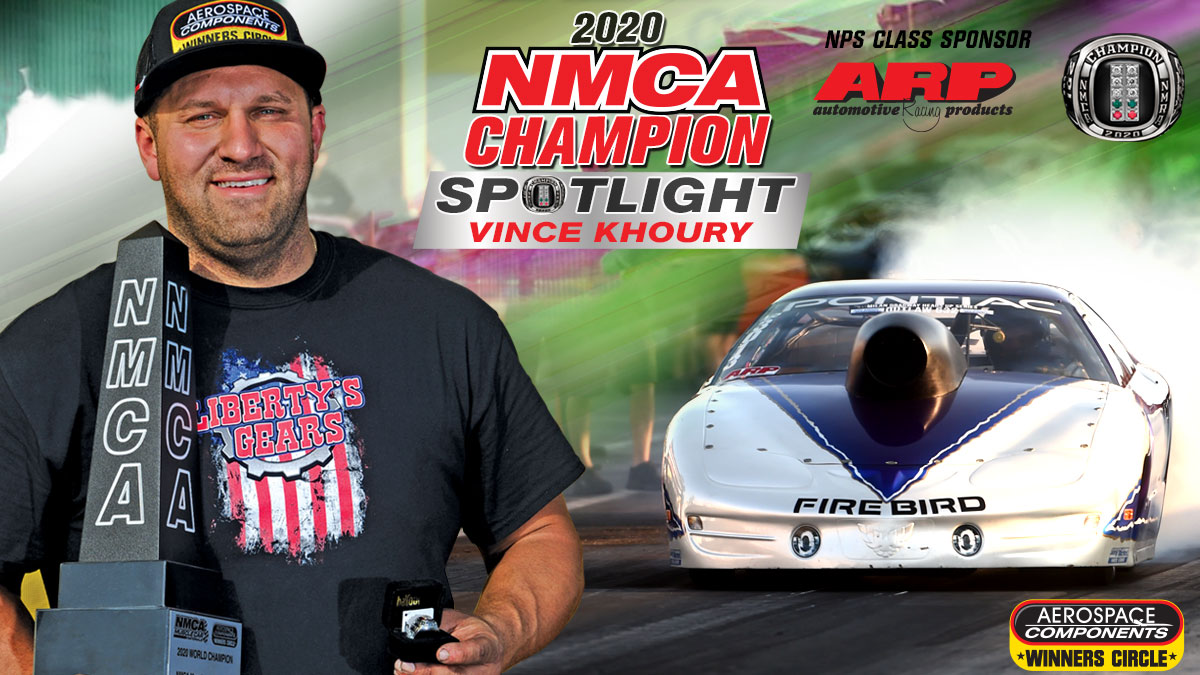 By Mary Lendzion While Vince Khoury had been competing in Dart NA 10.5 presented by Diamond Pistons, he made the move to ARP Nitrous Pro Street late last year, and has been on a mission ever since. He set the pace in qualifying with a 4.50 and went to the Aerospace Components Winner's Circle with a 4.56 at the first NMCA event of 2020, the 18th Annual NMCA Muscle Car Mayhem presented by Holbrook Racing Engines in March at Bradenton Motorsports Park in Florida. He then qualified in the second spot with a 4.56 and earned a runner-up finish with a 4.61 at the 12th Annual Scoggin-Dickey Parts Center NMRA/NMCA All-Star Nationals in June at Atlanta Dragway. Upon returning home to Michigan, Khoury and his crew replaced the naturally aspirated 499 cubic-inch engine that was under the hood of his Firebird with a nitrous-enhanced 632 cubic-inch built by his family's Khoury Racing Engines. The 499 cubic-inch engine was my dad's old Pro Stock engine from when he ran Pro Stock, said Khoury, who picked up where he left off by qualifying in the fourth spot with a 4.62 and made it to the semifinal before exiting eliminations with a 4.66 at the Nitto Tire NMRA/NMCA Super Bowl presented by HPJ Performance in early August at World Wide Technology Raceway in Illinois.

A few weeks later, he qualified in the eighth spot with a 4.62 and was hoping to go rounds to gain points, but turned on the red light in the first round of eliminations at the NMRA/NMCA All-American Nationals presented by Force Engineering, in late August at U.S. 131 Motorsports Park in Michigan. As determined as he could be, he qualified in the second spot with a 4.43, raced all the way to a runner-up finish with a 4.53 and cemented the 2020 NMCA ARP Nitrous Pro Street championship at the final NMCA event of the season, the 19th Annual Nitrous Supply NMCA World Street Finals presented by Chevrolet Performance, in late September at Lucas Oil Raceway in Indiana. As icing on the cake, Khoury also wrapped up a fourth-place finish in Ground Control Outlaw 632 at Milan Dragway in Michigan, while his brother, Rocko Khoury, wrapped up a sixth-place finish in NMCA Dart NA 10.5 presented by Diamond Pistons and a third-place finish in Liberty's Gears All Motor at Milan Dragway in his Mustang.