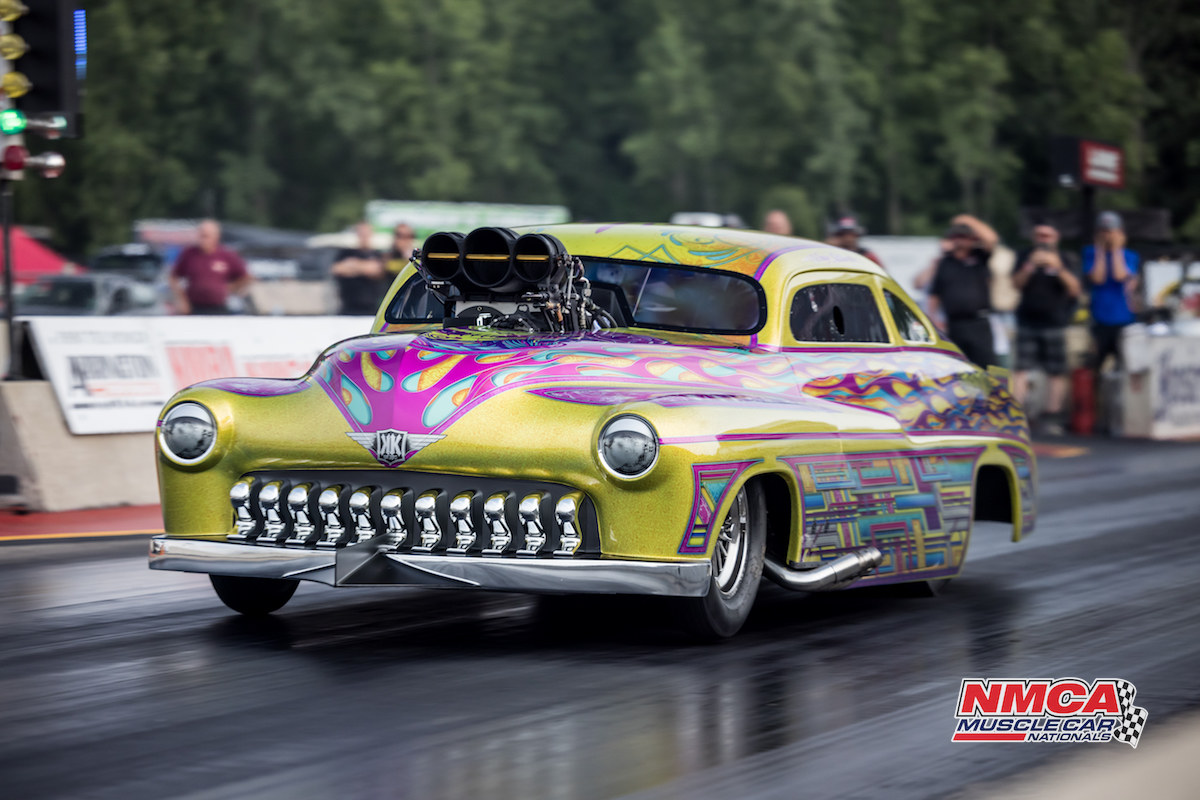 More than 500 racers from across the country converged for the Inaugural Arrington Performance NMRA/NMCA Power Festival presented by Force Engineering, July 22-25, 2021 at U.S. 131 Motorsports Park in Martin, Michigan.

They were utterly unflinching from the starting line to the finish line at what's known as The Fastest Track in Michigan, and they gave it everything they had to edge out the competition and earn an Edelbrock Victor Award.

A galaxy of fans gathered to take in all of the action alongside representatives from Ford, Chevrolet, Dodge // Mopar and other respected companies. The PRI Road Tour also was on site at the fourth of six NMCA events and fifth of six NMRA events this year.

On the NMCA side, Steve Summers shimmied to a 3.70 to set the pace in the always-astonishing VP Racing Lubricants Xtreme Pro Mod category, but featured in the final round were Craig Sullivan and his just-debuted El Mero Mero 1949 Mercury and Randy Adler and his eye-catching 1957 Chevy. Sullivan won with a 3.75 to Adler's 3.89.

Ron Rhodes rocketed to a 4.19 to lead qualifying in NMCA Mickey Thompson Street Outlaw/NMRA VP Racing Madditives Street Outlaw. In a highly anticipated final round of eliminations, Rob Goss reacted with a .0007 at the hit and won with a 4.21 in his Challenger after Rhodes went into wheelspin in his Camaro.

Tripp Carter tackled a 7.77 to lead qualifying in Holley EFI Factory Super Cars, a category closely-watched by faithful fans. The final round of eliminations, however, put the spotlight on Bill Skillman and Chuck Watson II, who is fresh off a win in NHRA Constant Aviation Factory Showdown at Summit Motorsports Park in Norwalk, Ohio. With all eyes on them, Skillman went through the traps with a 7.77 to take the win over Watson II, who recorded a 7.84.

Vince Khoury kept his foot planted on the pedal to a 4.35 in his Firebird to lead qualifying in ARP Nitrous Pro Street, and the Michigan-based driver pulled off a win with a 4.43 when Jake Naumann's Nova was a little sluggish off the line.

Eric Bardekoff ran to a 4.57 to lead qualifying in NMCA Edelbrock Xtreme Street/NMRA Edelbrock Renegade, and remained on point all weekend. He blasted to a 4.58 on his way to the win over very tough competitor Joel Greathouse, who turned on the red light in the final round of eliminations.

Leonard Long rowed the gears of his G-Force transmission to a 7.82 to set the pace in qualifying in Dart NA 10.5. The Pennsylvanian proceeded to park in the NMCA Winner's Circle with a 7.84 against John Langer, who landed at 7.96.

In Coan Stock/Super Stock Combo, Brad Zaskowski wrapped up the win despite breaking out with a 10.17 on a 10.18 as Bruce Lang left the line just a little too early and turned on the red light.

Brent Wheeler ran right on his 9.75 index to lead qualifying in Quick Fuel Technology Nostalgia Super Stock, but Jim Netherland and T.D. Holland went to the final round of eliminations. Both drivers broke out, but Netherland nabbed the win with a 10.22 on a 10.25 index, while Holland ran to a 9.71 on a 9.75 index.

David Mormann ran right on his 11.00 index to lead qualifying in Detroit Truetrac Nostalgia Muscle, but the final round of eliminations saw Andy Warren wheel to a 10.02 on a 10.00 index to wrap up another win against Matthew Keiser, who also recorded a 10.02 on a 10.00, but wasn't quite as quick off the starting line as Warren.

Scott Williams was ready with a .001 reaction time to lead thirty-four fellow competitors in MagnaFuel Open Compqualifying, but after he exited eliminations, Matt Nap, with a 12.10 on a 12.04 dial, defeated Phil Wrobleski, who broke out with a 9.53 on a 9.56 dial.

The eight quickest drivers in the Dodge // Mopar HEMI Shootout made it into the Arrington Performance HEMI Quick 8 presented by Red Line Oil on the final day of the event, and Alan Scruggs used a holeshot and a 9.41 to upset Tony Demaio, who drove to a 9.19.

Chevrolet fans saw Glenn Pushis power to a 10.01 to lead qualifying in Chevrolet Performance Stock presented by Scoggin Dickey Parts Center. On race day, he rolled up next to Ronnie Hackelton for the final round of eliminations, and the battle of the Camaros ended with Pushis picking up the win with a 10.00 to Hackelton's close 10.04.

Kurt Anderson, who's famous for high-flying wheelies in his Camaro, clocked a 9.77 on a 9.75 index to lead qualifying in LME Street King presented by Chevrolet Performance, and then hung his front tires before hauling to the win with a 9.78 on a 9.75 index against Keith Vennekotter, who turned on the red light.

Tom Poston ran right on his 11.50 index to lead qualifying in Proform LSX Rumble presented by Chevrolet Performance, but DeWayne Massengale and Kevin Rowand met in the final round of eliminations. There, Massengale motored to the win with a 12.08 on a 12.00 index, while Rowand turned in an 11.24 on an 11.00 index.

In Cor-A-Vent Factory Stock, Ryan Van Dusen, behind the wheel of his Corvette, outran Paul Petcou, who was piloting his Challenger RT.

Terry Pennington led qualifying with a 9.56 in Factory Appearing Stock Tire (FAST), a category for cars that appear as they did when they were in the showroom. Later, he was to face Don Giannone in the final round of eliminations, but he had breakage, giving Giannone the win with a 10.62.

Racers of the Motor City Muscle Challenge, a heads-up, naturally aspirated class where cars roll on 9-inch tires, were a special part of this event, and Shawn Staniszewski stopped the clock at 9.00 to lead them in qualifying. He also made it to the final round of eliminations, where he ripped off an 8.89 to upset Richard Eldred, who raced to a 9.37.

This event also hosted the final rounds from the rain-shortened NMRA/NMCA Super Bowl of Street-Legal Drag Racing presented by HPJ Performance, which was in May at World Wide Technology Raceway in Illinois. In VP Racing Lubricants Xtreme Pro Mod, Steve Summers sailed to a 3.70 to outrun Chip King, who clocked a 3.73, while in NMCA Mickey Thompson Street Outlaw/NMRA VP Racing Madditives Street Outlaw, Tony Hobson won, despite spinning the tires under his high-horsepower car at the hit, as Randy Matlock wasn't able to attend. In Dart NA 10.5, David Theisen dished out a 7.96 to defeat Joe Clemente, who turned in an 8.04, and in Holley EFI Factory Super Cars, Tripp Carter traveled to a 7.77 to better Bill Skillman and his 7.80.

NMCA racers will continue their chase to the championships at the NMCA All-American Nationals, Aug. 25-29 at Summit Motorsports Park in Norwalk, Ohio. The facility, owned by the Bader family, is one of the favorite stops on the NMCA tour.

For information about the series, and for continuous stories, photos, results and more, visit NMCAdigital.com and Racepagesdigital.com.

(The race wrap for the NMRA portion of this event is available on NMRAdigital.com)