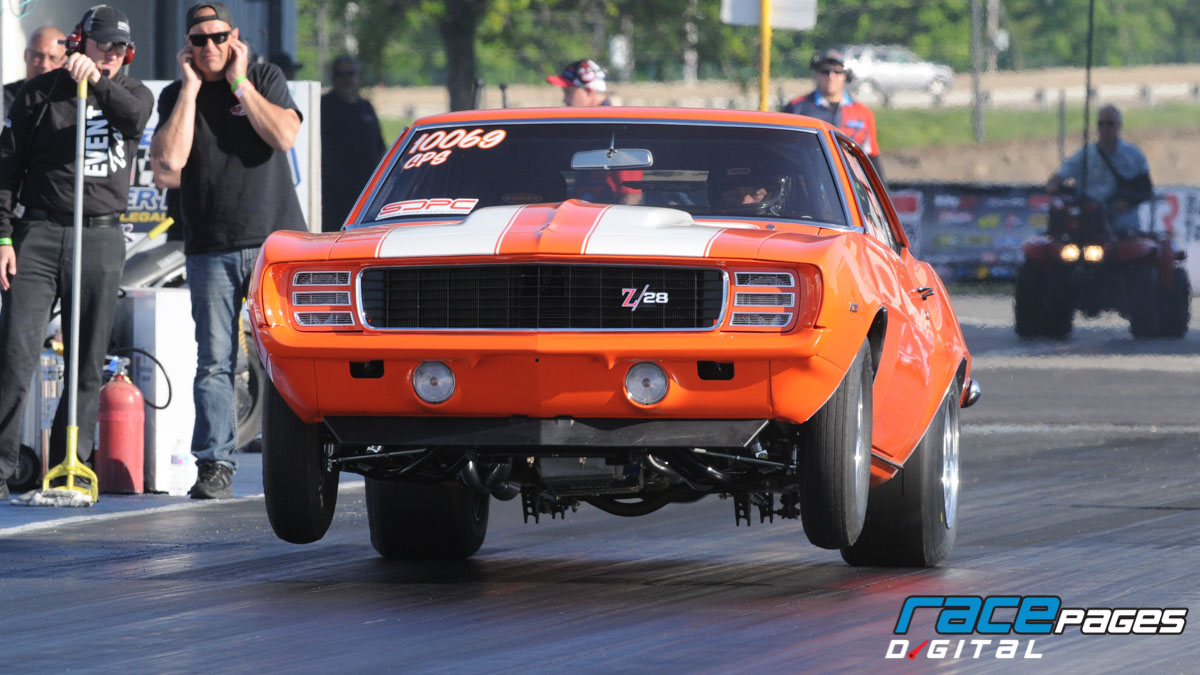 In 2015, Kevin Lumsden of Royce City, Texas, showed up at Lucas Oil Raceway at Indianapolis with the first DR525-powered car, a Fourth-Gen Camaro SS destined to compete in the Chevrolet Performance Stock presented by Scoggin Dickey Parts Center (CPS) class that the NMCA launched for the 2016 racing season. After several seasons racing in CPS, Lumsden parted ways with that car to test the waters in the supercharged Holley EFI Factory Super Cars class. Now in 2021, he found his way back to the crate-motor class with this brand new 1969 Camaro. Lumsden competed in the Proform LSX Rumble category for several years leading up to his entry into Chevrolet Performance Stock. While he had a head start with his build going into the class debut, it was the CRC Camaros of Glenn Pushis and Ronnie Hackelton that took the lead for the first few years. Both Pushis and Lumsden eventually decided to throw their hats in the Holley EFI Factory Super Car ring for a few years, but both of the men also decided later that they preferred the challenge of CPS.

Lumsden's new CPS machine began life in 2016 as a prize for one Chevrolet Performance Challenge Series racer. NMCA partnered with Real Deal Steel in Florida, which assembles various classic car bodies from aftermarket sheet metal, to put together a 1969 Camaro body with sheet metal from Auto Metal Direct, performed basic panel gapping, primed the F-body and painted it in a snazzy matte-silver finish before beginning the mechanical work. Chris Alston Chassisworks provided a pro-touring style of suspension for the Camaro, while Scoggin Dickey Parts Center and Chevrolet Performance supplied a Connect & Cruise LS3/T56 powertrain for the build. A Moser Engineering rearend went under the car, as did Wilwood disc brakes, Weld wheels, and Mickey Thompson tires. To make this roller maneuverable, IDIDIT provided a steering column and an AutoPro USA/Volante custom steering wheel made the wheels turn.

The prize was put on display at the Scoggin Dickey booth at several NMCA events throughout 2016, and at the end of the season, the top 10 racers from each of the CPCS classes were automatically entered to win. Certainly the biggest prize ever awarded in the CPCS, the Camaro carried a value of over $20,000, and it was Kevin Lumsden's son, Taylor, who not only collected the 2016 LME Street King championship, but who also was awarded the mega prize. I knew right from the get-go when Taylor won it that he wasn't going to be able to finish it, as young as he was, so we made a deal and he got the white Firehawk, Lumsden recalled. The Firehawk in question is the Fourth-Gen Pontiac Firebird that Taylor already raced in LME Street King for several years. What Lumsden also knew at that time was who he was going to send the car to after he made the deal. I knew right then I wanted the car to go to Kurt Anderson. What he puts out of there is phenomenal, and he was more than happy to do it, said Lumsden of LME Street King champion Anderson and his Autokraft Race Cars and Restoration company in Eau Claire, Wisconsin. It wasn't probably a month or two before we made the deal to send it to him. At the time, he was just going to do the paint, but as things progressed, he would say Why don't I do this or that, and I'm sure glad he did because he did a phenomenal job.

As you can tell, Anderson covered the classic Camaro in Hugger Orange, which wasn't exactly Lumsden's first choice. He previously owned a 69 Camaro back in the 80s that he frequently raced and thought about recreating that car with this build, but ultimately decided against the Tuxedo Black with white stripes color combination. While a 69 Camaro arguably looks fantastic in any color combination, Hugger Orange certainly is iconic in its own right. Lumsden could have continued with the Pro Touring theme of the giveaway car, but converting it into a Chevrolet Performance Stock racer was always in the back of his mind. I was hesitant because it takes a little bit extra to get it to go through the air, he said of the classic Camaro's aerodynamics. It's not like the new stuff, but I always thought, how cool it would be to put it in the class. Lumsden dropped the car off to Anderson at Autokraft in July of 2017, and while he contemplated the Camaro's purpose, he spent the next two years racing in Holley EFI Factory Super Cars with his COPO Camaro. As the pandemic restrictions began took effect in 2020, though, Lumsden's 2020 season was quickly derailed. The 69 project, however, finished up in June of that year and he was able to pick it up from Autokraft and bring it back to his home in Texas.

Still unsure of the direction he would take with the Camaro, Lumsden decided to drop an engine in the car and go racing, as he was eager to get on track and show off Autokraft's beautiful work. Looking at his available parts, Lumsden grabbed his World Cup engine, which he used in his Fourth-Gen Camaro when competing at the Haltech World Cup race. The event offers a naturally aspirated class that became a draw for many CPS and NMRA Coyote Stock racers who enjoy running their 'sealed engine combinations unrestricted. Some of them, like Lumsden and fellow CPS racer Ronnie Hackelton, even have slightly hotter, non-sealed powerplants they use specifically for that race. The car finally made its debut at the NMCA World Finals in 2020 in the LME Street King class with only a handful of dyno runs under its belt, and Lumsden used the event to get some shakedown runs on the car. It ran right around 10-flat, noted Lumsden, who recalled that he broke out in the first round with a 9.999 run on his 10.00 index.

After that race, Lumsden made the decision to pursue the Chevrolet Performance Stock class once more and over the winter, he ordered a Chevrolet Performance DR525 crate engine from Scoggin Dickey, which arrived early in 2021 as they became rather hard to get. I went to one test session and it wasn't worth a flip, Lumsden recalled. We went down the track once had a MAP-sensor wire that was cut. Shortly after that, he made the necessary repair, loaded up, and headed to Georgia for the NMRA/NMCA All-Star Nationals at Atlanta Dragway. There, Lumsden sorted through more new-car issues, but managed to qualify sixth with a 10.11 run at 129 mph. In the first round of eliminations, Lumsden was quicker on the tree against Scott Brown, but slowed to a 10.26 against Brown's winning 10.01. Lumsden left the event knowing he needed to make changes, particularly to his air box, which he thought was causing problems with the mass-airflow sensor. And with the top three cars in the class all running nines at that event, he knew he needed to extract more performance from his classic hot rod. [gallery ids="19465,19471,19468,19467"]

At the next race in St. Louis, Lumsden improved with a 10.01 in qualifying. Despite the better performance, the rest of the field was improving as well, with Hackelton leading the charge in qualifying with a 9.83 and sending Lumsden home after the first round of eliminations with a 9.88 to Lumsden's 10.18. After the St. Louis race, it was evident that I couldn't compete, Lumsden told us. Changes to make the Camaro more competitive ensued, starting with a new steel hood replacing the lightweight aluminum one that was on the car. This change served two purposes, the first of which was to purposefully add weight to adjust the front-to-rear weight balance to hopefully remedy some occasional tire spin. The second was that he and Anderson didn't think the aluminum hood would be strong enough to use with hood pins, and Lumsden wanted to remove the factory hood latch mechanism to create space for an early COPO Camaro air box that now provides a smooth, straight shot at the throttle body. I took the car back to Kurt, had him paint the original steel hood and rework the rear quarters for the new tires, Lumsden noted. The tires are almost 10 pounds lighter than the other ones.

While he knew about the rule changes regarding the new tire options for 2021, Lumsden was keen to retain the original quarter panel and wheel well shape. As the season went on, though, it became quite evident that the new tire options offered performance benefits, and most of the class racers switched to them. Anderson suggested the quarter panel modification all along, and assured Lumsden that he wouldn't even notice the completed changes. While this was all being done, Lumsden took the opportunity to have bead locks fitted to his rear wheels, as his tires had occasionally spun on the rims. As of this writing, Lumsden is hoping to make the next race in Martin, Michigan. I wanted to make sure I got it out as much as possible to see how good of a job Kurt does, Lumsden said of his Hugger Orange machine. This class is so competitive. There are guys in there that are really good; Ronnie Hackelton, [Glenn] Pushis, and of course, Jeff [Heintz], and Scott [Brown]. You better be on your game when you show up.