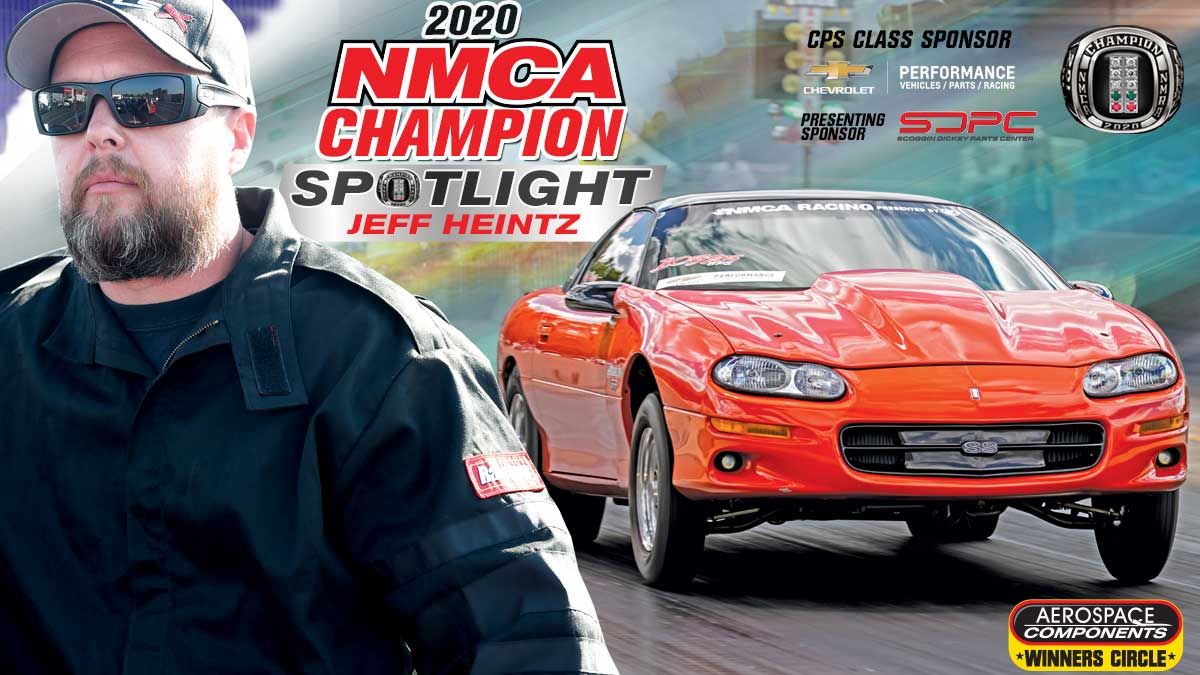 By Mary Lendzion When Jeff Heintz began competing in the Chevrolet Performance Challenge Series several years ago, he was behind the wheel of two different cars. One of them was his 2009 Cadillac CTS-V, and the other was his wife Christy's 2003 Corvette Z06, and he was holding his own in the series LME Street King category and in NMCA TorqStorm Superchargers True Street. But during that time, Heintz had his eye on fellow competitor Kevin Lumsden's 1999 Camaro, and ended up purchasing it from Lumsden a few years ago. Heintz hopped into the Chevrolet Performance Challenge Series Chevrolet Performance Stock presented by Scoggin-Dickey Parts Center category, and has been hauling in the car powered by a sealed DR525 engine backed by an RPM Transmissions Turbo 400 and rolling on Mickey Thompson slicks. And while he has done very well in the points chase, he was determined to earn a championship in 2020. 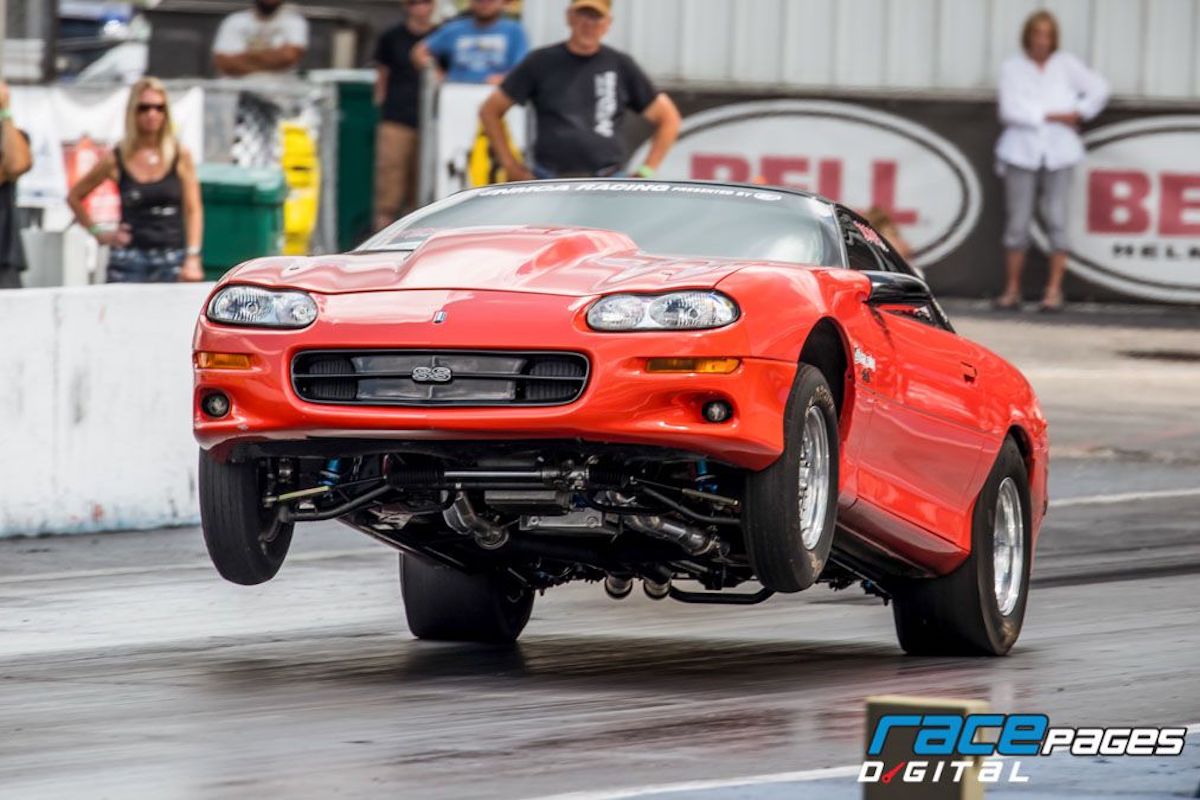 Heintz, who owns Heintz Racing in Moorseville, North Carolina, began by qualifying in the third spot with a 10.14 and going all the way to the always-welcoming Aerospace Components Winner's Circle with a 10.18 at the first NMCA event of the season, the 18th Annual NMCA Muscle Car Mayhem presented by Holbrook Racing Engines in March at Bradenton Motorsports Park in Florida. He then qualified in the fifth spot with a 10.35 and lost in the first round of eliminations when the rear-end under his Camaro broke at the 12th Annual Scoggin-Dickey Parts Center NMRA/NMCA All-Star Nationals in June at Atlanta Dragway. Focused on going further at the Nitto Tire NMRA/NMCA Super Bowl of Street-Legal Drag Racing presented by HPJ Performance in early August at World Wide Technology Raceway in Illinois, he qualified in the third spot with a 10.30 and earned another win, this time with a 10.33. A 10.31 helped Heintz qualify in the second spot at the next event, the NMRA/NMCA All-American Nationals presented by Force Engineering, in late August at U.S. 131 Motorsports Park in Michigan, but, after a very close race, he exited in the first round of eliminations with a 10.34. 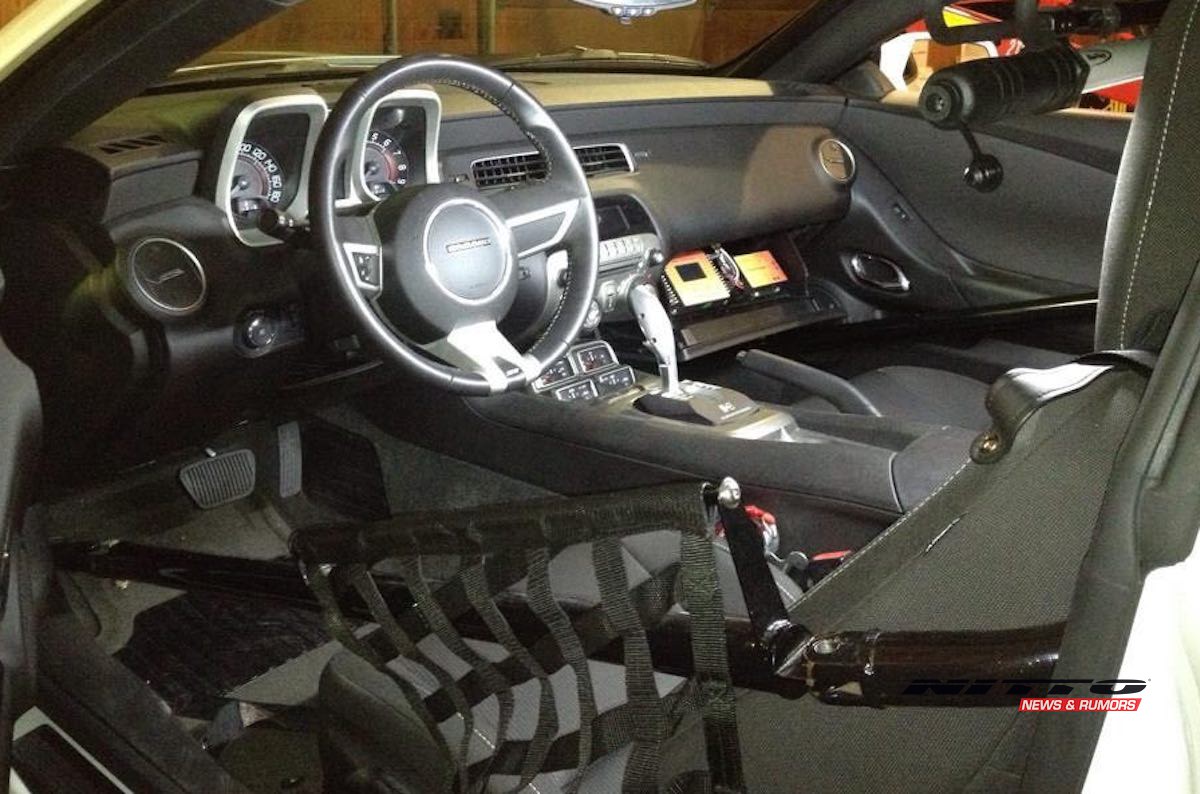 With the championship within his grasp, he qualified in the third spot with a 10.20, wheeled to another win, this time with a 10.25, and captured the 2020 Chevrolet Performance Stock presented by Scoggin-Dickey Parts Center category championship at the 19th Annual Nitrous Supply NMCA World Street Finals presented by Chevrolet Performance in September at Lucas Oil Raceway in Indiana. The final event was definitely the highlight of the season, said Heintz. Ronnie Hackelton and I were so close in points that I had to qualify higher than him and go at least one more round than him. I'm so glad to have been able to make it happen. I could not have asked for a better ending to the season, and I'm pretty blown away, to be honest. It's awesome, and I want to dedicate this to my friend, Jeff Hagaman, who passed away in a racing accident two years ago. He was a huge part of our racing program as well as the shop, and I wouldn't be doing this had he not encouraged me to. While the Coronavirus pandemic prevented NMCA from having its annual ceremony to celebrate champions, each was invited to share the words they would have shared on stage in front of their fellow racers, family and friends. 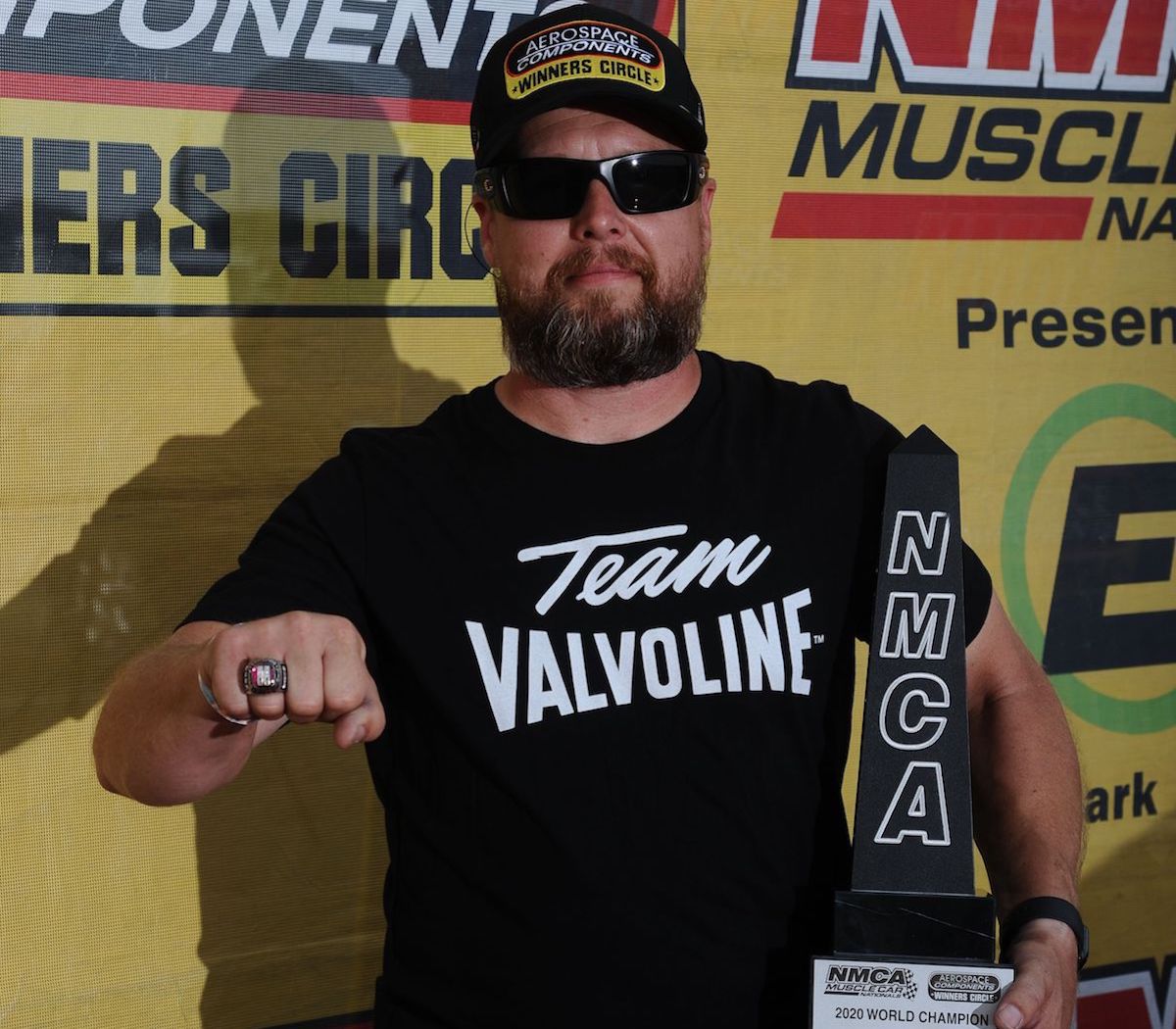 HOW DOES IT FEEL TO HAVE EARNED A CHAMPIONSHIP DURING SUCH AN UNUSUAL SEASON I'm so thankful to NMCA and all the others involved who made it a possibility for all of us to have an awesome series to run in 2020. With things being so crazy in 2020, I really thought our season would be canceled. I couldn't have imagined we would win three regular races, the Super Bowl race and end up winning the championship as well. Such a blessed year. WHAT WAS THE BIGGEST CHALLENGE YOU OVERCAME ON YOUR WAY TO EARNING THE CHAMPIONSHIP I think my biggest challenge this year was listening to others smarter than me and using that information to learn how to correctly set up the suspension in my car. I'm proud to say that I can't remember spinning during competition all year. We spun and wheelied hard in testing though. WHICH FAMILY MEMBERS AND FRIENDS WOULD YOU LIKE TO THANK FOR SUPPORTING YOU ALONG THE WAY I would like to thank a few people. As always my mom, Cynthia, and dad, Larry, for always being there for me and helping in any way possible. My wife, Christy, for putting up with long work hours and late nights working on cars. My shop, Heintz Racing, and the guys there who work for me and help on the car as well as continue to get work done while I'm gone racing. Thanks Cory Adams, Zach Woolard and Jake Hoyle for all you do. Thanks to some of the best friends anyone could have, including Phil Hoefler, Terry Faust, Tim Martin, Tommy Dabbs, Don Dixon, Nick Massengale, Jeff White, Jeff Dixon, Kevin Lumsden, Jesse Wilson, Rodney Massengale and the other half of Team Shake and Bake, Scott Brown. WHICH SPONSORS WOULD YOU LIKE TO ACKNOWLEDGE I would like to thank the following sponsors: Heintz Racing, RPM Transmissions, Valvoline, Strange Engineering, AFCO Racing, Mickey Thompson Tires, Coan Engineering, Bogart Racing Wheels, Brian Tooley Racing, Customs By Bigun, Dixon Connection, The Driveshaft Shop, Mark Williams Enterprises and Scoggin Dickey Performance. WHAT DO YOU ENJOY ABOUT RACING IN CHEVROLET PERFORMANCE STOCK The best thing about running in the NMCA series is the people we have met and become friends with. It's like a racing family that comes together to do what they love. 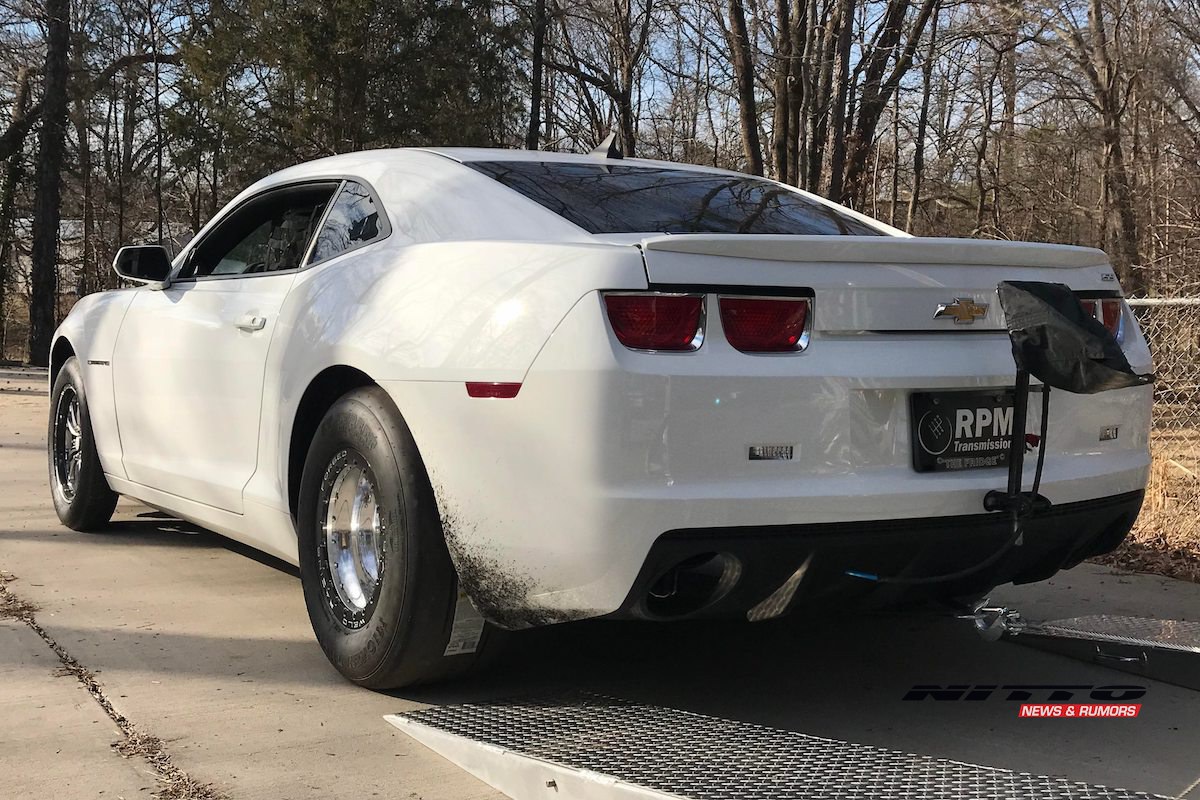