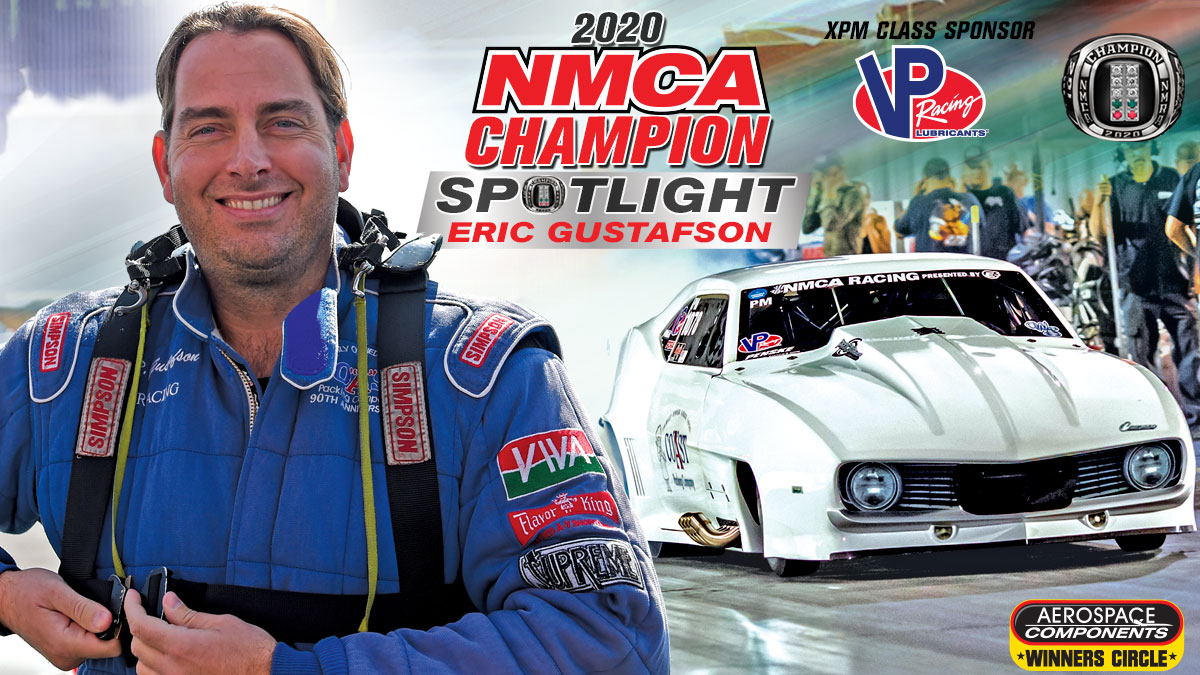 By Mary Lendzion Eric Gustafson is prepared to give it everything he has at each and every event, and just as prepared is his Gary Naughton Race Cars-built Coast Packing Company Camaro powered by a Noonan Race Engineering Hemi, ProCharger, Liberty's four-speed, Neal Chance converter and Quick Drive converter drive, and rolling on Precision Racing Suspension and Hoosier tires. The VP Racing Lubricants Xtreme Pro Mod driver attributes that to steadfast support from his crew chief, Cameron Hensley, crew members Trucker John Urgo, Ben Liedel, Nick Strohbeen, tuners Jason Lee and Patrick Barnhill of PTP Racing, who use a Haltech engine management system, Tim Lyons, Mason Lyons and Robbie Kellerhals of Lyons Custom Motorsports, where his car is maintained between races, and Jimmy Rector, who takes care of his engine with input from Darrell Makins of Noonan Race Engineering. Gustafson is confident that he couldn't achieve what he achieves without them, and that includes all of the success he saw this year. The Californian set the pace in qualifying with a 3.67 and went to the Aerospace Components Winner's Circle with a 3.68 at the first NMCA event of the year, the 18th Annual NMCA Muscle Car Mayhem presented by Holbrook Racing Engines in March at Bradenton Motorsports Park in Florida. It's always been our mantra to do the best that we can do to be competitive and win, so it felt good to win at the first event of the season, said Gustafson.

He qualified in the fifth spot with a 3.99 and lost in first round of eliminations with a 4.72 at the 12th Annual Scoggin-Dickey Parts Center NMRA/NMCA All-Star Nationals in June at Atlanta Dragway, and qualified in the second spot with a 3.71 and earned a runner-up finish with a 3.78 at the Nitto Tire NMRA/NMCA Super Bowl presented by HPJ Performance in early August at World Wide Technology Raceway in Illinois. We were chasing gremlins in our car so we struggled at the event at Atlanta Dragway, said Gustafson. That was frustrating because we wanted to perform at the level we were capable of performing at, but we stayed focused as we went through a process of elimination to find the problem, and the car was flawless at the next event, which was at World Wide Technology Raceway. On a roll, he qualified in the fifth spot with a 3.75 and earned another event win with a 3.70 at the NMRA/NMCA All-American Nationals presented by Force Engineering, in late August at U.S. 131 Motorsports Park in Michigan.

Then, with nerves of steel, he headed to the final NMCA event on this year's tour, the 19th Annual Nitrous Supply NMCA World Street Finals presented by Chevrolet Performance, in late September at Lucas Oil Raceway in Indiana. Unflinching, he unleashed a 3.66 to lead qualifying, and several rounds later, another 3.66 to capture the event win and the 2020 NMCA VP Racing Lubricants Xtreme Pro Mod championship. As a bonus, he also holds the category's elapsed time and top speed records with a 3.63 and 207.75 mph, which is no easy feat among such a fierce field of drivers. I have a great team that also includes my family and everyone at Coast Packing Company, said Gustafson. We're all passionate about what we do and have a common goal to do the absolute best. We work well together and support each other. We don't quit, and we accomplished what we set out to, win the NMCA Xtreme Pro Mod championship. It's a dream come true. While the Coronavirus pandemic prevented NMCA from having its annual ceremony to celebrate champions, each was invited to share the words they would have shared on stage in front of their fellow racers, family and friends. HOW DOES IT FEEL TO HAVE EARNED A CHAMPIONSHIP DURING SUCH AN UNUSUAL SEASON To win a championship in any season, let alone in a year as challenging and unique as 2020, is awesome. There were more challenges across the board for anyone racing this year. Furthermore, it is incredible that NMCA and other racing organizations were able to contest a racing series. No matter how you look at it, winning a championship is always special, but there is an extra special feel to a 2020 championship. Maybe because in some respects, there should have never been a racing season and 2020 champions in all Pro categories. WHAT WAS THE BIGGEST CHALLENGE YOU OVERCAME ON YOUR WAY TO EARNING THE CHAMPIONSHIP There are always many challenges during the course of a racing season in Pro Mod, but what sticks out to me is our ability to stick together as a team, support each other and maintain our commitment to excellence during a year of many distractions. Our team stayed hungry and kept working together no matter the challenges we faced. WHICH FAMILY MEMBERS AND FRIENDS WOULD YOU LIKE TO THANK FOR SUPPORTING YOU ALONG THE WAY My wife and kids, for supporting me and being very patient with me while I am racing. My mom and dad for supporting me, always encouraging me to pursue all my goals and driving me to be the best at everything I do. None of this is possible without the love and support of my family. Words can't express the gratitude I have for their support. Last but not least, our crew chief, Cameron Hensley, and the rest of our awesome team, including John Urgo, Ben Liedel, and Nick Strohbeen. WHAT SPONSORS WOULD YOU LIKE TO ACKNOWLEDGE First and foremost, my company and employees at Coast Packing Company. Thanks to Coast and our employees, we are able to use racing as a marketing platform that differentiates us from our competitors. The value it adds to conversations with customers and industry colleagues is unparalleled. Also, of course, Jason Lee and Patrick Barnhill at PTP Racing for everything they do. Their contributions and friendship go beyond strokes on a keyboard for the tune-up. This championship is as much theirs as it is ours. Also, Tim Lyons and the team at Lyons Custom Motorsports for all the work behind the scenes to give us a hot rod that is on point and ready for battle, and of course, Darrell Makins at Noonan Race Engineering and Jimmy Rector for all they do for our engine program, the team at Procharger, Craig at Liberty Gears, Steve at Quick Drive, Haltech, and Hoosier Racing Tires. I am sorry if I forgot anyone. WHAT DO YOU ENJOY ABOUT RACING IN NMCA VP RACING LUBRICANTS XTREME PRO MOD I enjoy racing Xtreme Pro Mod because it's the quickest and fastest cars in the series and the competition and camaraderie are amazing. Everyone wants to beat you, but is willing to help you when you are in need. What a special and fantastic group of racers!
2020 NMCA Champions
,
Coast Packing
,
Haltech
,
Hoosier
,
Liberty\\\\\\\\\\\\\\\\\\\\\\\\\\\\\\\\\\\\\\\\\\\\\\\\\\\\\\\\\\\\\\\\\\\\\\\\\\\\\\\\\\\\\\\\\\\\\\\\\\\\\\\\\\\\\\\\\\\\\\\\\\\\\\\\\\\\\\\\\\\\\\\\\\\\\\\\\\\\\\\\\\\\\\\\\\\\\\\\\\\\\\\\\\\\\\\\\\\\\\