Georgina Buckley Prevails Over Painful Past at Summit Motorsports Park 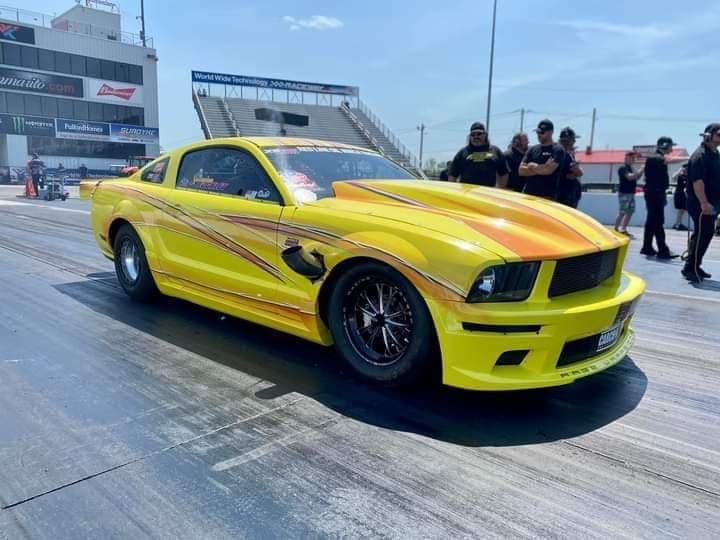 When Georgina Buckley, one of the country’s fastest women on a 275 drag radial tire, had a catastrophic wreck at Summit Motorsports Park in 2016, it left both her car and her confidence in complete shambles.

Back then, Georgina had been running in the low 4.60-range with her nitrous oxide-equipped 1985 Ford Mustang. Unfortunately, the car met its demise on a bye run during round two of Street Outlaw eliminations at the NMCA World Street Finals in Norwalk, Ohio, in August. Towards the top-end of the track, the Fox body’s throttle stuck and Georgina careened into the retaining wall, head first, before the car burst into fire; fortunately, her NecksGen safety device saved her from being paralyzed or worse.

She was taken to a nearby hospital where it was determined that she had broken several ribs, cracked her sternum, sustained a concussion, and had other injuries. Meanwhile, her Mustang had been so severely damaged, that she opted to have it crushed rather than worry about someone else eventually getting a hold of it and trying to race it.

“The cage moved. The frontal impact had the engine push the firewall back almost seven inches into the car, and the rear end split in half,” she explained of just some of the damage. “It was a tough choice, since it had been my husband’s pizza delivery car from when we first started dating, but it simply wasn’t safe anymore.”


Her husband, fellow racer, and crew chief, Dave Buckley, helped Georgina get back up to speed as her healing progressed, but her mind had lingering reservations about getting back to racing. “The world had passed me by, and I didn’t think I could compete with how quick everyone was running, so we decided Ultra Street/Xtreme Street [instead of X275] would be a good fit,” noted the Illinois-based racer. “I’m blessed that my husband always has my back and will do everything he can within his power to make sure that I can go racing and see me happy.”

With a 2005 Ford Mustang that the couple had purchased as a roller replacement not long after the accident. Bigger and heavier than her previous ride, the new Mustang was fitted with tons of safety equipment such as a wrap-around Racetech seat, fire system, cage-style gas pedal to prevent the possibility of sticking again, and more.

Finally, Classic Auto Body painted the prettied-up pony car and Rage Wraps installed the finishing touches so that Georgina could shine with her triumphant return.


By 2018, just a year and a half after the accident, she was back at it. Her first time in the car was incredibly poignant, though, as she wasn’t quite sure how she would react from the emotional trauma of her accident. “I took it slow and made small steps forward to build back the trust not only in the car, but in myself that I wouldn’t have a flashback and choke,” shared the driver. “My nerves and anxiety had more to do with me than anything else.”

Fortunately, Georgina found her groove like she hadn’t skipped a beat. Although she had proven to herself that she could still race without any issues, there was one hurdle she still hadn’t yet overcome – racing back at the scene of the wreck itself, Summit Motorsports Park.

Over the off-season of 2021-2022, Georgina’s S197 was converted over from a carbureted system to FuelTech’s electronic fuel injection instead. On the hub dyno in April of 2022 at FuelTech’s headquarters, the fifth generation Mustang impressed everyone in attendance with its performance and capabilities… Georgina was ready to finally tackle her demons.

Looking at the season schedule, Georgina circled the weekend of August 26-28 for her redemption. The NMCA All-American Nationals presented by Sick the Magazine at Summit Motorsports Park would be her stage, and Straightline Performance installed a new anti-roll bar to help prepare her Mustang.

As if fate was blessing the decision, Georgina got a surprise a week before the event. “I found out that my car had been chosen to be featured on the event t-shirt and I was so excited!” she proclaimed.


Racing at the track for the first time since her tragic accident six years prior, it was a roller coaster of highs and lows. “We had already raced with the NMCA in St. Louis and Michigan, but getting back to Norwalk was a huge hurdle for me,” she said. “When we first arrived, I walked around and went up to the top end to look down the track and had a few butterflies but was mostly just excited to be there.”

With confidence, Georgina moved forward teching in and setting up. “I went up to the starting line in the left lane where this all happened and waited for something, any kind of reaction, and… there was nothing. And at that point I knew I could do it,” she asserted.

Ultimately, Georgina did “do it” and qualified ninth of sixteen in NMCA Edelbrock Xtreme Street with a quickest pass of 4.747 at 150.82 mph. She won her first round pairing in eliminations with an improved run of 4.718 at 152.12 mph but went out in round two to multi-time champion Joel Greathouse.

Happy to be leaving with both her and her car in one piece, she was also finally able to “eat her own ice cream.” Back in 2016, Georgina and Dave had purchased some of Norwalk’s famous one-pound-for-one-dollar treat, but her accident occurred before she had a chance to enjoy it. “I don’t remember anything about the accident, but I do remember that I didn’t eat my ice cream… later, Dave confessed that he had eaten mine so it wouldn’t go to waste while I was in the trauma center,” laughed the brave woman.

Although she didn’t win the race itself, Georgina was “so ecstatic” that she even petted her car on the roof after the run to celebrate having finally closed the book on a moment that had plagued her for years. From her darkest point, Georgina has come full circle to prevail over her painful past and surely has plenty of bright moments still yet to come.