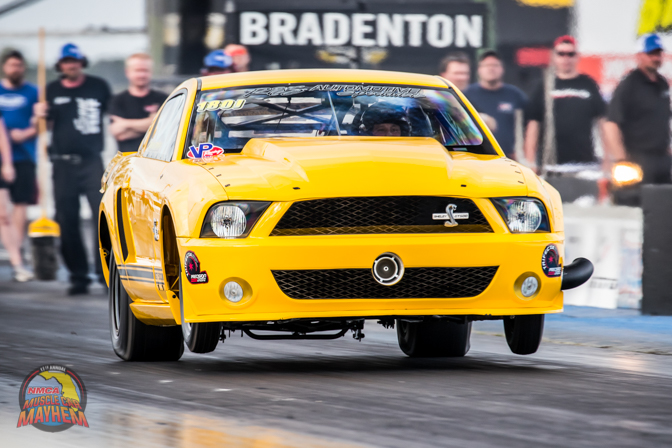 Florida's Bradenton Motorsports Park was bustling the opening weekends of March, first with the Nitto Tire NMRA Spring Break Shootout, which was then followed immediately by the NMCA Muscle Car Mayhem event. Both events featured the Street Outlaw category, sponsored by VP Racing Fuels on the NMRA side and Mickey Thompson for NMCA. The 2019 rules are aligned with the X275 class, which allowed competitors to simply enter either series with the addition of a series sticker pack. That means the turbocharged camp can select spec-units that are either 80mm, 85mm, or 88mm. For the supercharger gang, there are two different sizes, both offered by Vortech and ProCharger. On the nitrous side, the usual line-up for small-block and conventional big-block engine packages are allowed. The NMRA and NMCA differ from X275 in that they allow a 5-inch-bore-space combination, to be used with either nitrous or in naturally aspirated trim. On the NMRA side, it was Vinnie Palazzolo (Pictured Above) who came out swinging with his 2008 Shelby GT500 that packs a Bennett Racing Engines 427ci engine with a Precision 88mm turbocharger. With Nicky Notch and his wife, Bridgette Palazzolo, handling the tuning and crew chores, the Pennsylvania-based team raced their way into the Aerospace Components Winner's Circle with consistent 4.40 performances. Palazzolo topped a tire-spinning Dom DiDonato and his 2003 Mustang GT in the finals. A week later, former NMRA co-founder James Lawrence steered his 1995 SVT Cobra down the fabled Bradenton Motorsports Park racing course and picked up right where he left off in Radial Wars a year ago. His KBX Performance built and tuned ride, which sports a chassis by DMC Racing, took down newcomer Shawn Pevlor in a tightly contested match-up. Lawrence posted a 4.442 at 164.82 mph to the nitrous-injected run of 4.488 at 161.82 mph of Pevlor. The next event, the 11th annual Scoggin Dickey Parts Center NMRA/NMCA All-Star Nationals, presented by MAHLE Motorsports, features a combined Street Outlaw category with both series as the rules are a direct crossover. It happens April 5-8 at Atlanta Dragway. For more information and Advance Tickets'spectators save 20% visit www.NMRAdigital.com/GA or www.NMCAdigital.com/GA [envira-gallery id="12681"]
Atlanta Dragway
,
Bennett Racing Engines
,
Bradenton Motorsports Park
,
Garrett Advancing Motion
,
Haltech Elite 2500
,
KBX Performance
,
MAHLE Motorsport
,
Mickey Thompson Tires
,
nmca
,
NMRA
,
Precision Turbo
,
ProCharger
,
Scoggin Dickey Parts Center
,
Vortech
,
VP Racing Fuels