After a booming start to the Inaugural Arrington Performance NMRA/NMCA Power Festival Presented by Force Engineering, things get real today as testing wraps up and racers move into qualifying in all the heads-up and index classes. While the morning weather called for schedule adjustments, test passes will wrap up today as racers in all categories move into qualifying at The Fastest Track In Michigan. Unfortunately the new schedule necessitated the cancelation of the NMRA vs. NMCA battle in the Open Comp All-Start Shootout, but is shining bright and all the other classes keep running. To keep tabs on all today's action, follow this page and our social channels.

GET UP TO DATE QUALIFYING RESULTS HERE

This is the updated schedule for today's action at the Inaugural Arrington Performance NMRA/NMCA Power Festival Presented by Force Engineering.

Some racers got the setup right, some got it wrong and spun, and then a select perhaps got it wrong, but found plenty of traction. Edelbrock Xtreme Street racer Tim Knieriem found plenty of traction for his nitrous-assisted Mustang during Thursday's test and tune session, and Knieriem reported that all seems to be good as he was able to pedal the throttle to bring the car back down fairly nicely.

Back in action after an extended absence, Edelbrock Renegade/Xtreme Street racer Bob Cook was held hostage by parts delays for his new engine. The 9.5-deck, 427-cube small-block Ford makes use of a Bullet camshaft, Crower shaft rockers, Trick Flow High Port heads, and a Holley Hi-Ram intake. He stuck with his tried and true ProCharger D-1X to enjoy the weight break, but the combo made great power on the hub dyno at Redline Motorsports. Burning VP Racing Fuels M1 Methanol the engine is controlled by the Holley Dominator EFI system, and ignited by a MSD Pro 600.

A newcomer to NMCA competition, Tony Scott has run all of the events so far, save for Commerce. He made the trip to Martin, Michigan, from Western Kentucky. He recently picked up this 2020 COPO Camaro and his is dialing in the timing and air/fuel ratio to get the car running the way he wants it in the Coan Stock/Super Stock category. He has big plans for both cars next season, however, with one car slated to compete in the Holley EFI Factory Super Cars class.

Marty Stinnett is on the property this weekend and piloting Bruce Maichle's beautiful blue Pontiac Firebird in Mickey Thompson/VP Racing Madditives Street Outlaw competition. Stinnett drove the F-body to a win last year, and is keeping his skills sharp while his Pro 275 Mustang has some bodywork finished up.

Joel Greathouse and KBX's Justin McChesney are coming off of two event wins, taking home the big prize for the NMRA/NMCA Super Bowl and the NMRA Ford Performance Nationals in Norwalk, Ohio. Greathouse is currently leading the points chanse in Edelbrock Renegade, and while he looks to be on track to defend his 2020 championship, Eric Bardekoff is hot on his heels in second place.

VP Madditives/Mickey Thompson Street Outlaw driver Steve Halprin and his team have been busy over the last two days here at US 131 Motorsports as they swapped a number of torque converters in search of improved performance. Halprin said the transmission may have been hurt, so they were swapping that out now before qualifying begins today.

Setting the pace for Mickey Thompson/VP Racing Madditives Street Outlaw during yesterday's time session was Rob Goss, who clicked off a 4.26 on Thursday right out of the trailer. Goss expressed that the Gen III HEMI and ProCharger-powered machine is running great, and that they are just racing the track and the competitor in the other lane via the tuneup. Tony Gillig has claimed numerous victories in the ARP Nitrous Pro Street category, but this event is the swan song for his nostalgic Olds Cutlass in the class as Gillig as sold the machine for a new racing venture that you'll be able to read about next week on RacePagesDigital.com. The Cutlass, however, is deadly consistent and quick, and is always in contention for the Nitrous Pro Street class win. 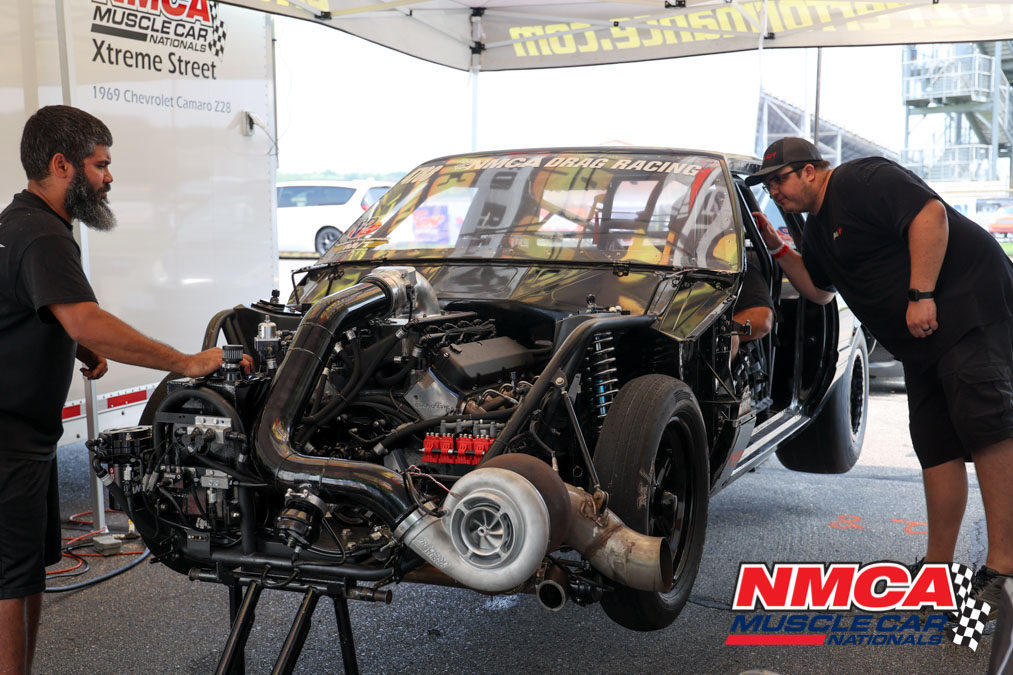 Tampa, Florida's Don Cruz only has only made a handful of passes on his turbocharged 1993 Mustang in VP Madditives/Mickey Thompson Street Outlaw since January, and his hoping to get to the 4.30s that the car is capable of this weekend. Cruz built the 400ci small-block Ford engine in-house and Matt Lunsford is here tuning the Holley EFI this weekend. Cruz's company, Cruz Performance, manufactures turbo Buick components and Cruz noted that he won the GS Nationals last month with his own turbo Buick that has run as quick as 4.60s. Nicole Liberty, who was a very successful junior dragster racer, is now a very successful ARP Nitrous Pro Street racer. She made her debut in the category last year, and earned her first win in it at the NMRA/NMCA Super Bowl of Street-Legal Drag Racing presented by HPJ Performance a few months ago at World Wide Technology Raceway in Illinois. Liberty, a design engineer at Liberty's Gears in Michigan, which is owned by her father, Craig Liberty, relies on a naturally aspirated 632 inch big-block Chevrolet engine built by her relatives at Khoury Racing Engines to power her Firebird. It's backed by a Liberty's Gears five-speed transmission, and Liberty enjoys experiencing the benefits of the transmission that is so popular among Liberty's Gears customers. When we stopped by her pit area, she and her crew were looking at her car's chassis and her carburetors in preparation for qualifying today.

Jeff Kowalczyk has owned his 1972 Buick Skylark GS for 45 years, and he has every time slip he has ever received in his car's console. With the help of a 455 cubic-inch Buick Stage 1 engine, Kowalczyk is dialed in for the Detroit Truetrac Nostalgia Muscle 12.00 index, and he's working toward his first win in the category he has competed in for three years. Kowalczyk's wife, Mary Walters, is also a racer, and this weekend, she's taking on TorqStorm True Street in her 1976 C10 with a 355 cubic-inch Chevrolet engine. 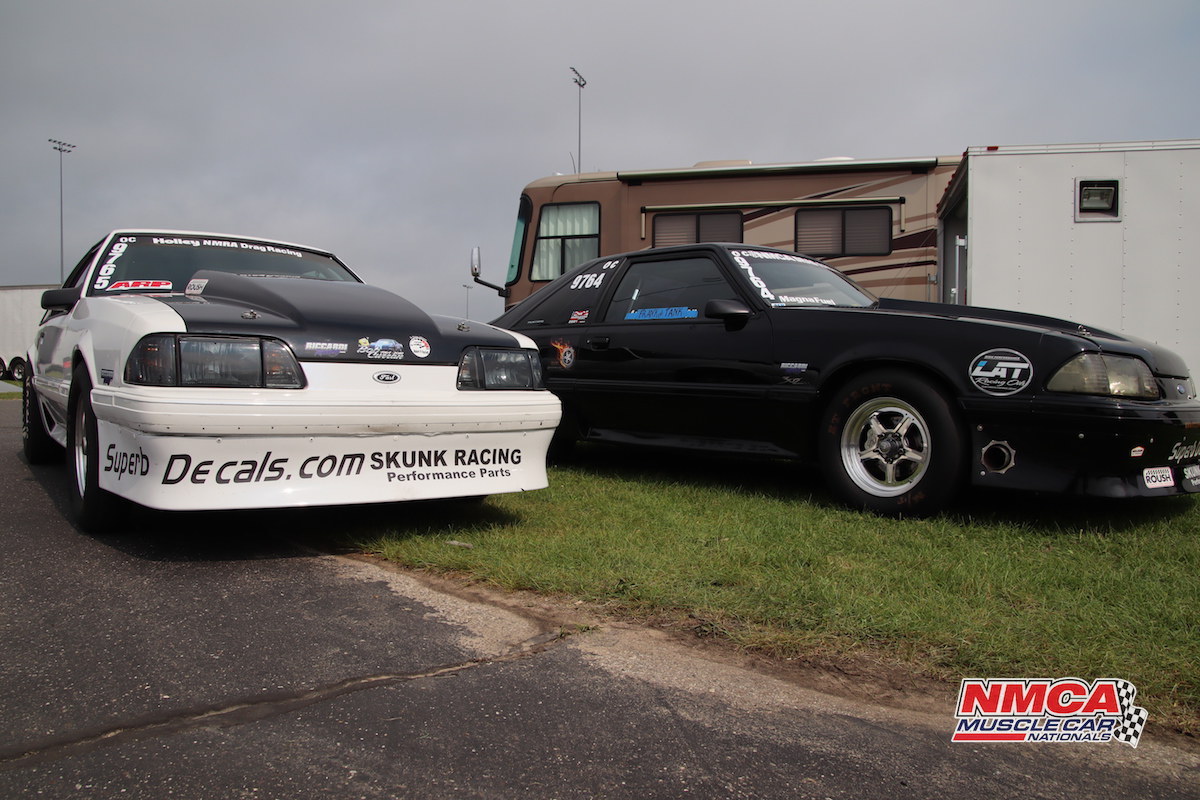 Jim Johnson has been driving his brother Craig Johnson's white Mustang since the first race of the season, as he was having a small-block Ford built by Roush for his own black Mustang. That engine is now ready, but because Johnson is currently holding down second place in NMRA ARP Open Comp points and wanted to stay in his brother's car for consistency reasons, he offered his Mustang, with his new engine in it, to Dart NA 10.5 racer Frank Hoffman, for NMCA MagnaFuel Open Comp this weekend. Hoffman happily accepted, and has already clocked a high 9-second pass in Johnson's Mustang this weekend.

When it comes to drag racing, there are few cars more popular than the Chevrolet Nova. Jeff Ancil's 1969 Nova is one example of why. Originally an L78 375hp 396 car, these cars were built for the drag strip. Ancil has the original engine and transmission at home in Indianapolis, but it has a period-correct 396 with a Turbo 400 transmission, and a 4.30 gear. Adhering to relatively strict F.A.S.T. Factory Stock rules, the car does enjoy breathing through a Pypes Performance Exhaust system on its way to 12.20s-12.30s. Ancil just recently changed the converter in the car so he's paying close attention to shift points and RPM drop between shifts. 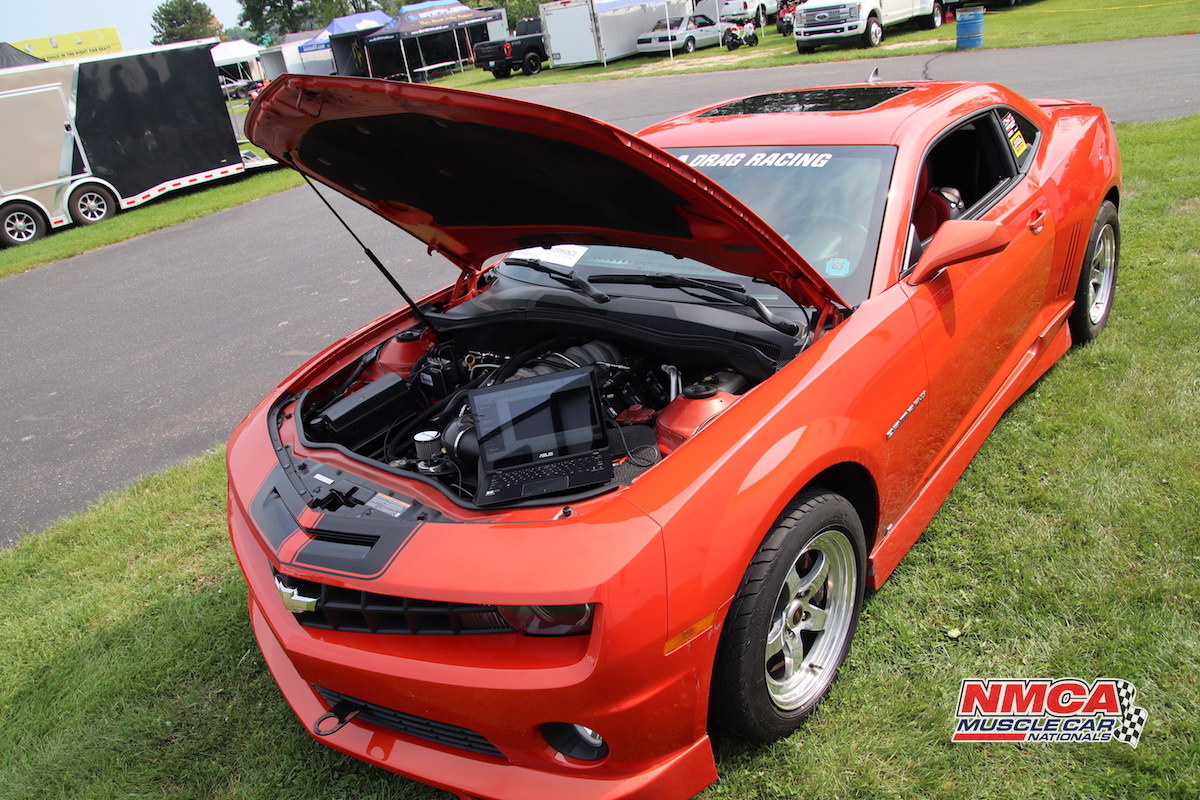 Regina Puckett had a solid 2020 race season, as she earned the win in Proform Rumble at the NMCA event at US 131 Motorsports Park, came close to earning the class championship and finished second in points. But, she says she's struggling a bit this year to get her Camaro with a 416 cubic-inch LS engine to settle into either the 11.50 or 11.75 index. I've been running too slow for the 11.50 index and too fast for the 11.75 index, said Puckett. It's getting frustrating, especially because things went well last year, but I have Matt Sorian off MS Tuning helping me with the tune-up with Holley EFI, and we'll get back to where we were." 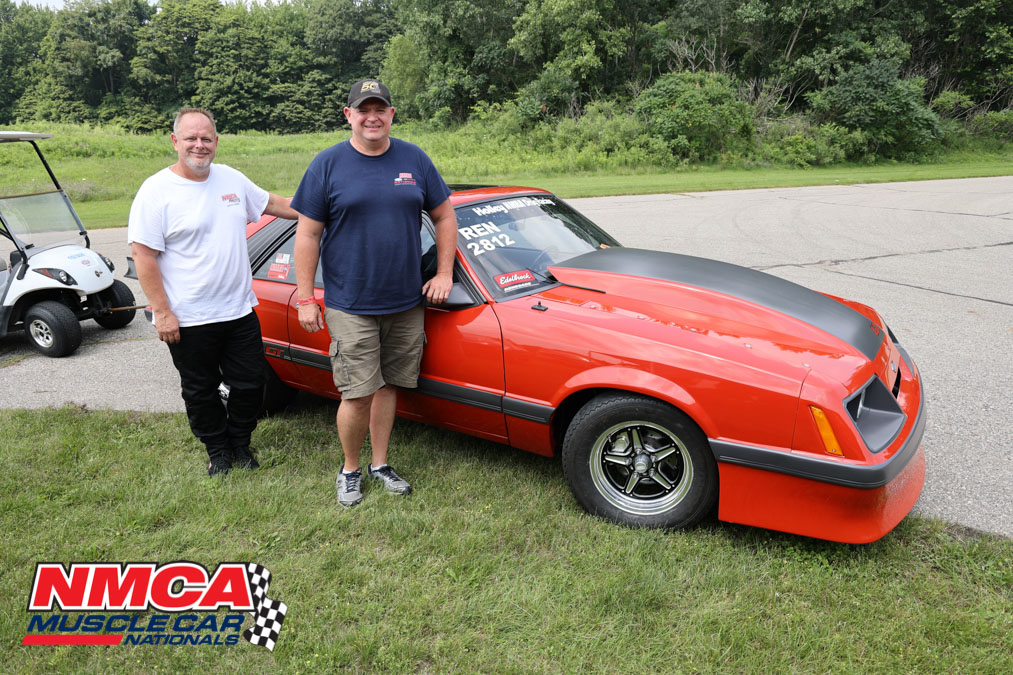 Billy Danforth knows he brought a knife to a gun fight by running his mint 1985 Mustang GT in Edelbrock Renegade/Xtreme Street this weekend, but he and his DLF Racing team have plans for a more competitive 440ci engine build in the future. In the meantime, he has Stephan Lacky driving the car, which is powered by a 347ci small-block Ford with an Induction Solutions nitrous system on it. Danforth said the Mustang went 5.80 at the previous event in Norwalk, and plans to bump the nitrous up a bit in qualifying. Danforth said his father bought the Mustang new in 1985, and Billy got behind the wheel of it shortly after around 1987 and has been making passes ever since.

LME Street King champion Kurt Anderson is finally back in his 1969 Camaro, after having his LSX engine upgraded by Wegner Motorsports with new Air Flow Research Mongoose cylinder heads. The new lungs were worth 30 horsepower over the previous pieces, and necessitated a new tuneup that picked up another 20. Now that he's on the track with 50 extra horsepower, Anderson is finding he's having traction issues at the hit, and will need to make some adjustments to find the hook that his car is normally known for. [gallery columns="2" size="full" ids="22372,22373"] Brian Mullaney rolled into the Dart NA 10.5 ranks for the first time this weekend. He's piloting Bob Johnson's 1980 Mustang, which is powered by a 505 big-block Chevrolet engine which Van Eric Performance built and Mullaney owns. It's backed by a Turbo 400 transmission, and it helped a happy Mullaney post a 9.31 and 146 mph in qualifying today. I think NA 10.5 is the coolest thing, and I'm glad that we're able to try it, said Mullaney, who's building a 1970 Nova for Dart 10.5, and hopes to debut that car next year. We know we have to work up to being competitive, but it would be really nice to win at some point. Don Murphy and Bob Travelbee are here helping Mullaney out this weekend.
Arrington Performance
,
Coverage
,
Event
,
Martin
,
Michigan
,
nmca
,
Power Festival
,
Race