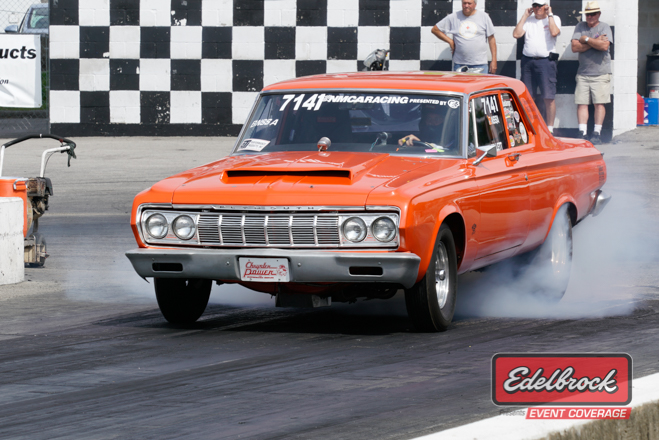 The track is going hot shortly and we'll have everything from Xtreme Pro Mods to first-time racers with street cars getting on track. It should be a great show! 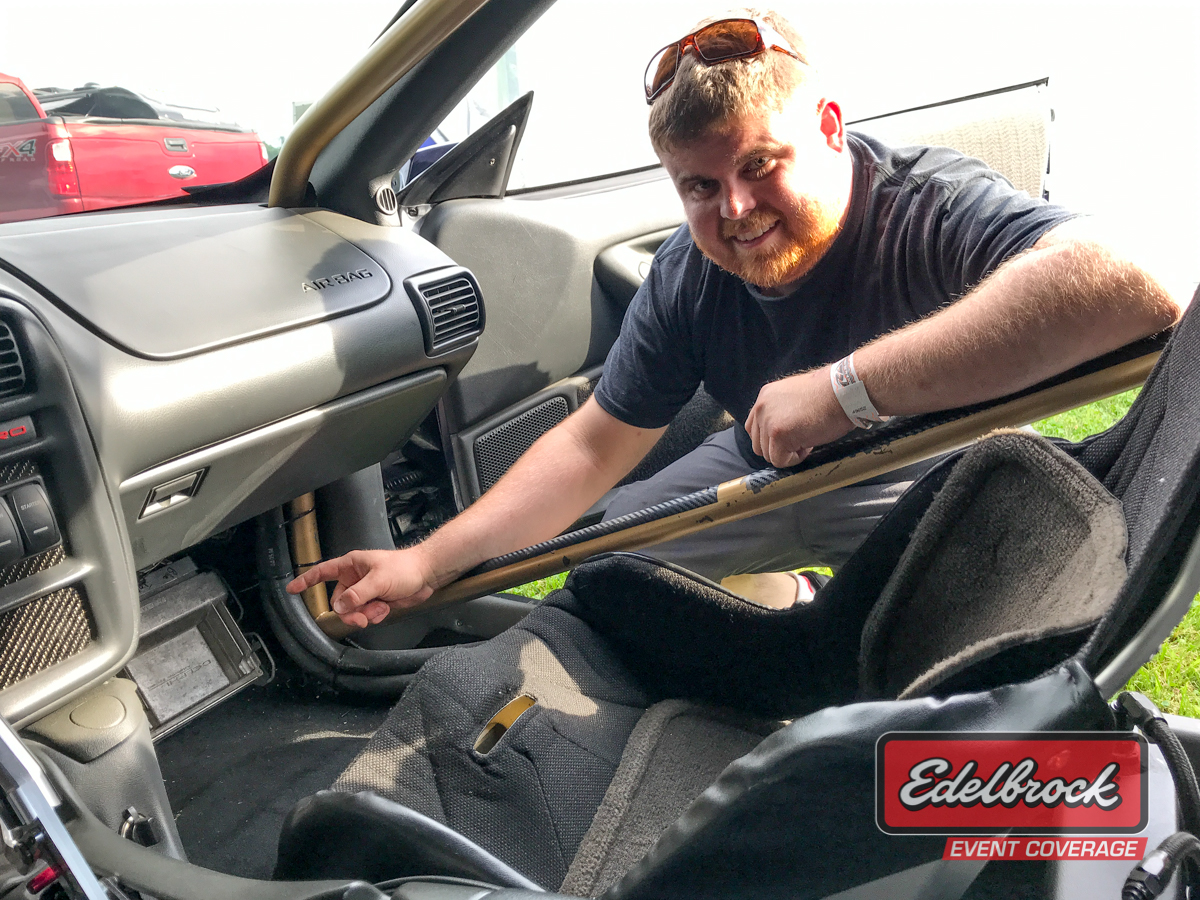 Elizabethtown, Kentucky's Chris Goode is competing in his first NMCA race with his 1998 Camaro in Edelbrock Xtreme Street. The Fourth-Gen F-body runs a stock 6.0-liter iron truck block with the coil packs and electronic control module from the same vehicle. The Mike Lough-built, 370ci mill sports Patriot heads, Diamond pistons and crank and Callies connecting rods, and its Edelbrock intake manifold gets fed a healthy does of atmosphere from a 76mm Precision turbo donated by Brian Tooley Racing. Chassis work was done by Jessie's Garage and on the dyno, the Camaro put down 1,255 horsepower to the wheels. 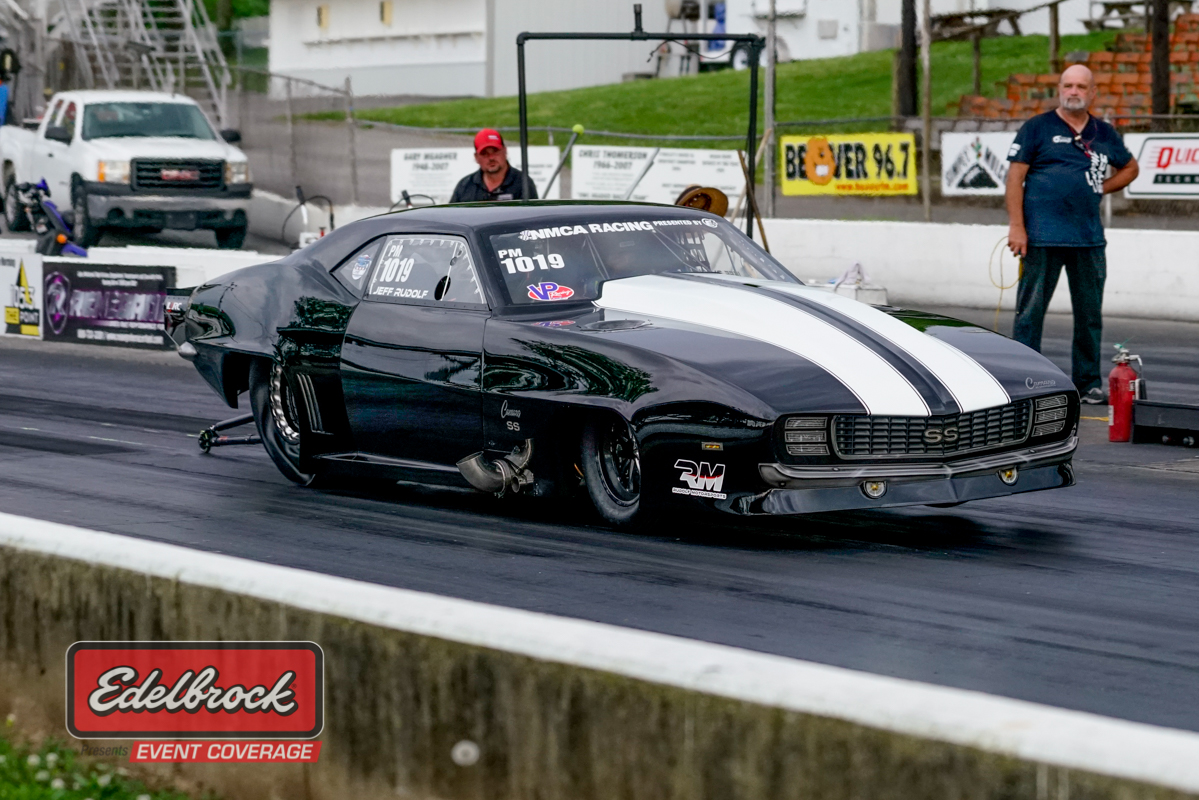 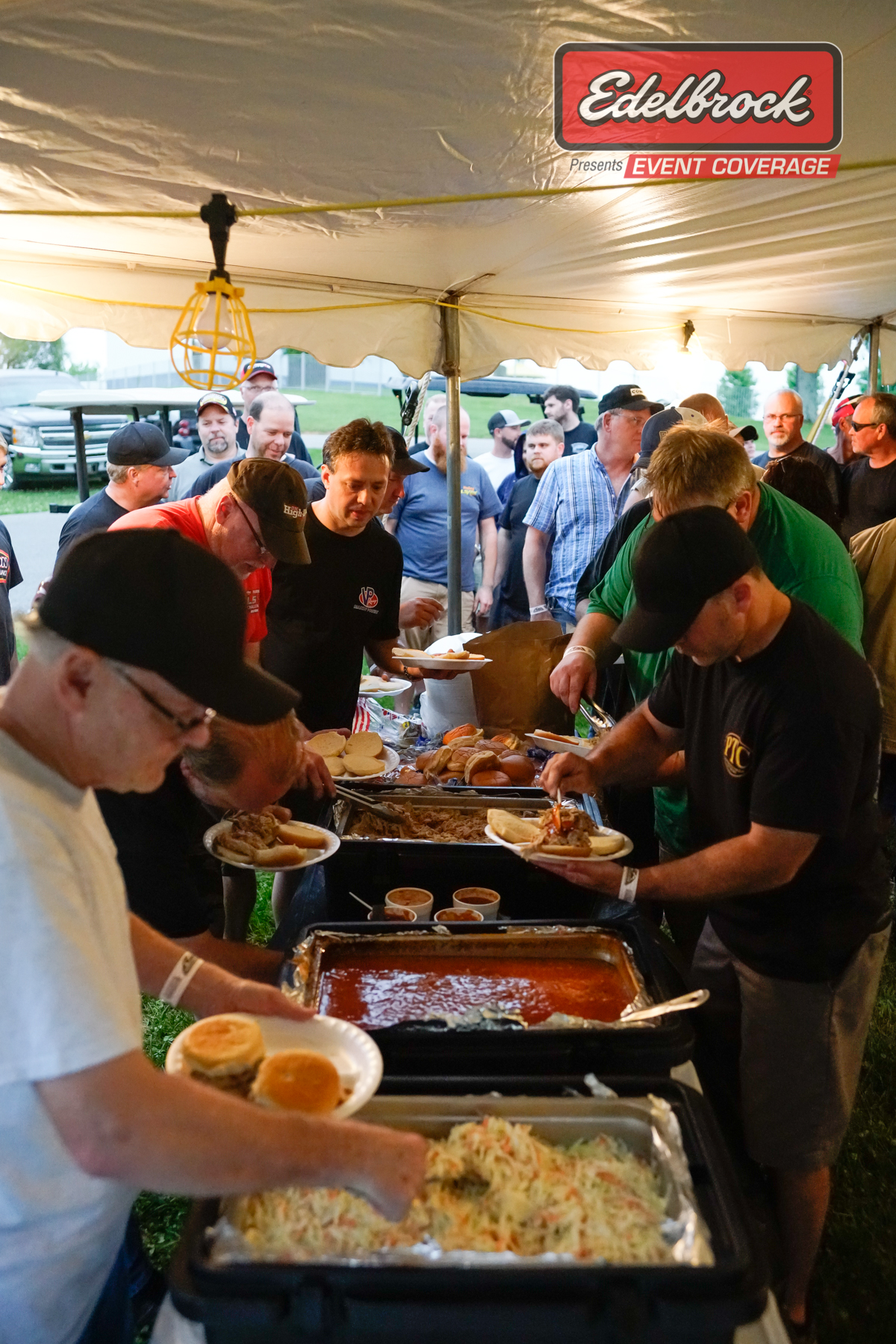 This weekend plays host to the LSX Shootout, which is part of the Chevrolet Performance Challenge Series, and as is tradition for the shootout, the event features a racer appreciation party where dinner, drinks, and over $15,000 in prizes are given away. The dinner held on Thursday evening featured guest speakers Bill Martens from Chevrolet Performance, and Keith Wilson from Scoggin-Dickey Parts Center. 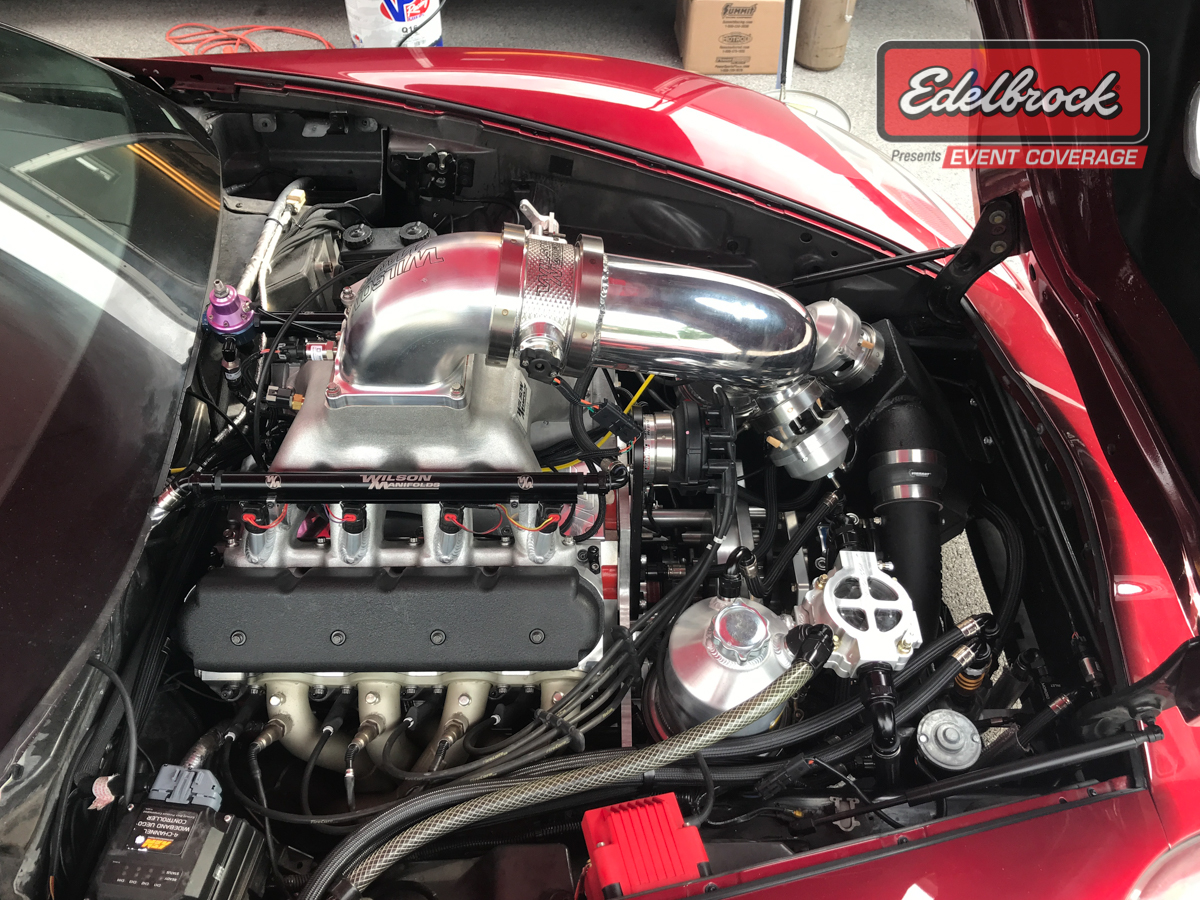 Ron Belcher and his team have been hard at work on his C6 Corvette, with the former Real Street entry switching from a nitrous oxide power adder to a new Vortech setup for Edelbrock Xtreme Street competition. Belcher will also be able to run in the special Brian Tooley Racing Real Street Shootout that is part of the Chevrolet Performance Challenge Series this weekend. 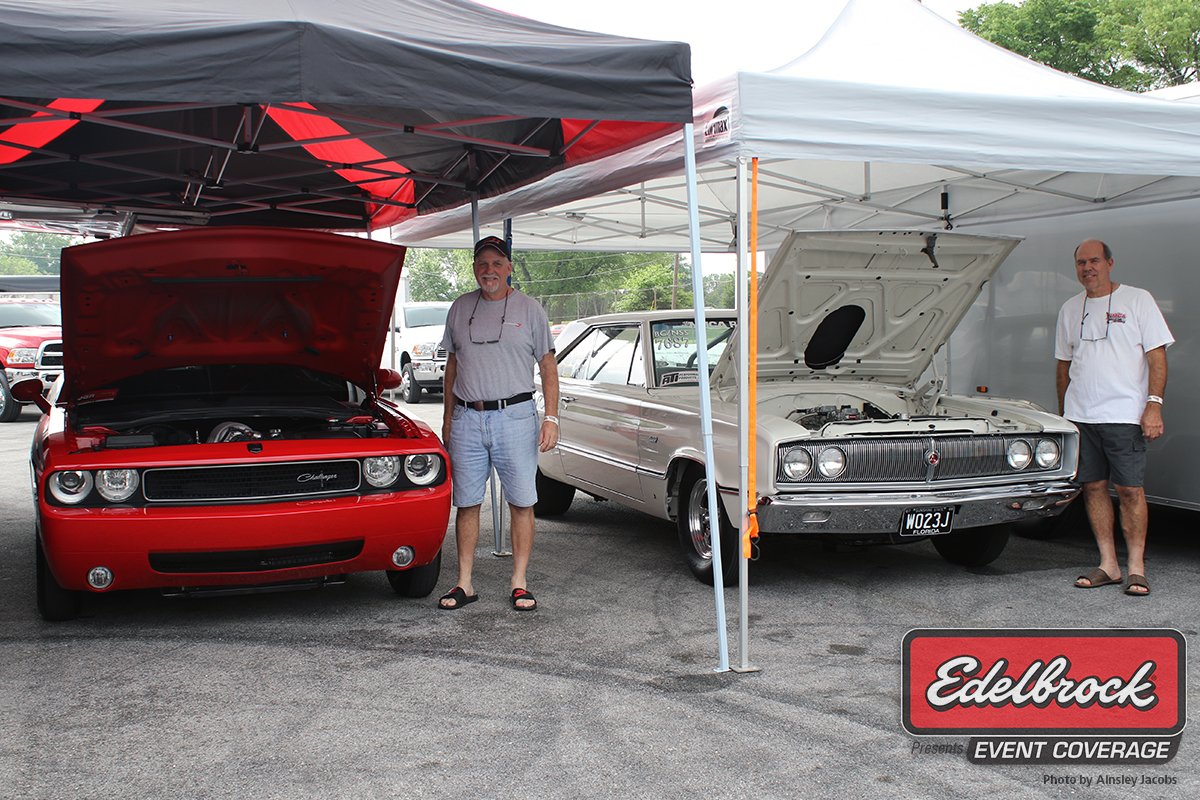 Friends for 35 years, Dave Sheehan (left) and Barry Dorn (right) both made the trek up from Florida for this weekend's race. Dorn is piloting his 67 Dodge Coronet with a 426 ci Hemi engine in the ATI Performance Products Nostalgia Super Stock category. He put the car together himself about three years ago starting with a stock platform and has added a few goodies over the years including an ATI torque converter which he won here at Beech Bend Raceway Park a few years back. Sheehan, however, purchased his 10 Dodge Challenger SRT new from the dealership and didn't have any intention of racing, but Dorn talked him into it. Originally, Sheehan's Hemi-powered hustler had a 6-speed transmission on board, but he's swapped it in favor of an old school three-speed instead. Although Sheehan ran in MagnaFuel Open Comp the past three years, this will be his first time out in Coan Engineering Stock/Super Stock. 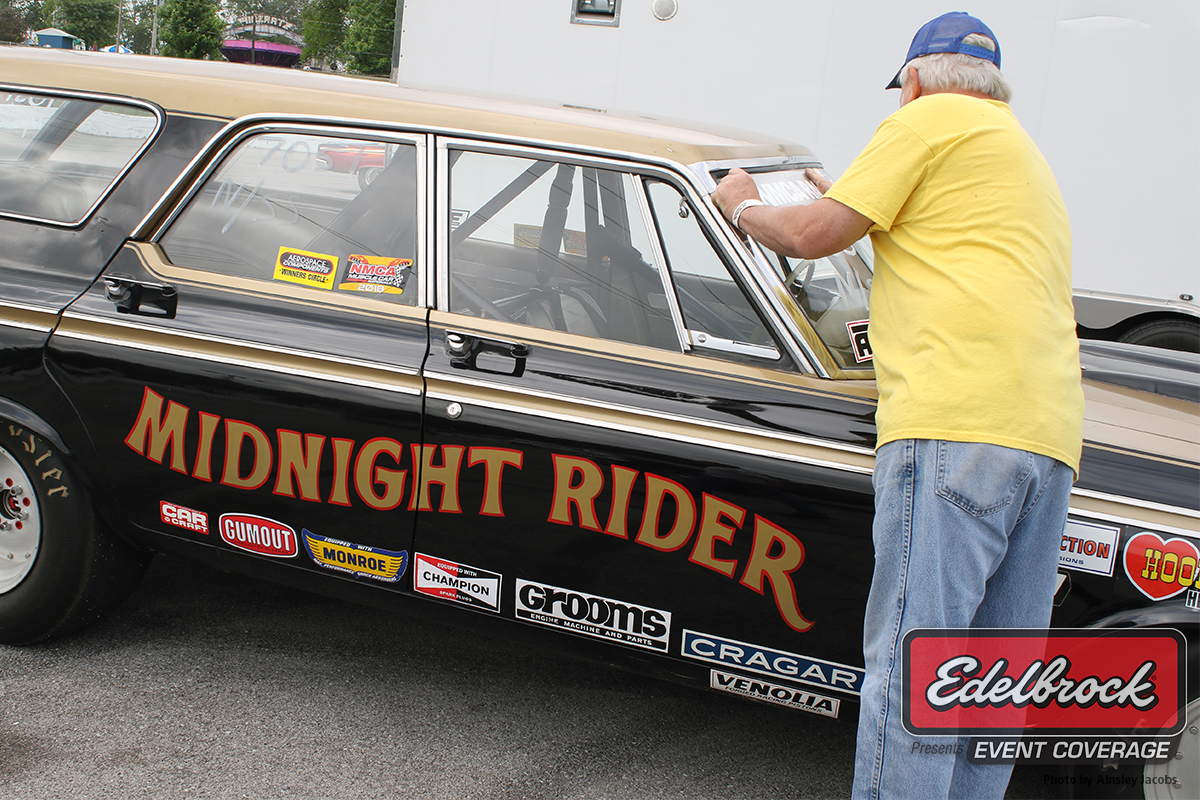 Speaking of friends, driver Jimmy Dever is taking the wheel on Dale Meers classic Dodge wagon in ATI Performance Products Nostalgia Super Stock this weekend. Dever took some time to show his support for the NMCA series this morning by slapping a fresh E3 Spark Plugs NMCA Drag Racing Series decal on the beautiful car. In its past life, the Dodge had been a Super Stock racer way back in the day, and the guys found it in 2017 in a barn where it had been sitting since 1980. They prepped the Chrysler big block was topped with a single carb and mated to a Chrysler A-727 transmission. This is their first time running the combo in quarter-mile trim. 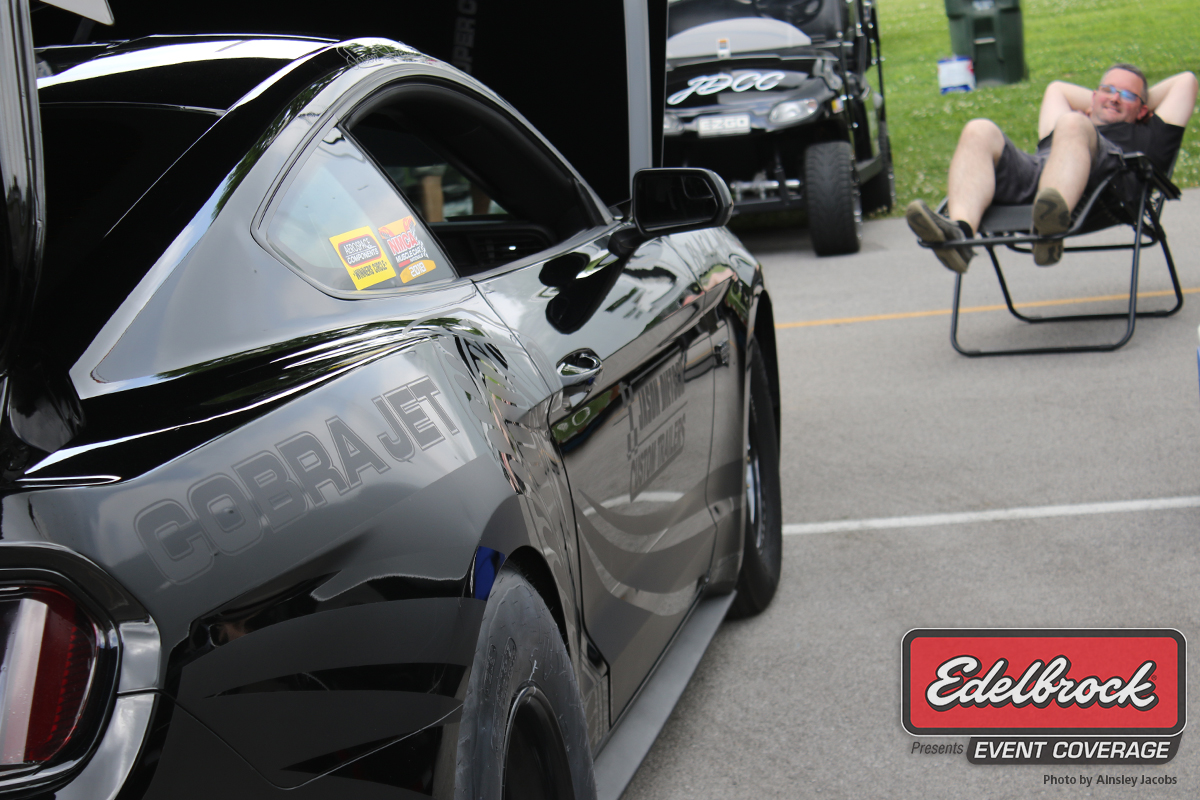 Over in Holley EFI Factory Super Cars driver Jason Dietsch's pits, all is right with the world and with his Whipple supercharged 16 Ford Mustang Cobra Jet. The guys from Ohio are enjoying a bit of relaxing after a nice breakfast at Waffle House this morning and are ready to get rolling with their day. 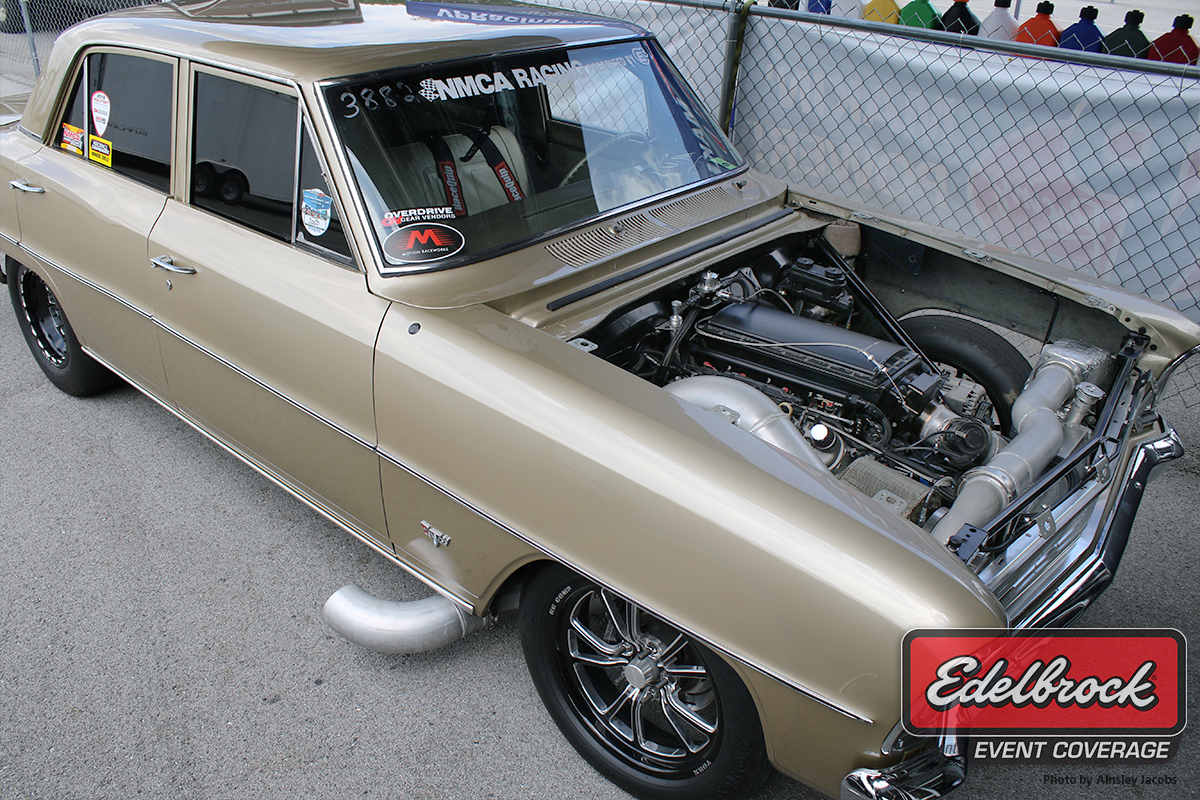 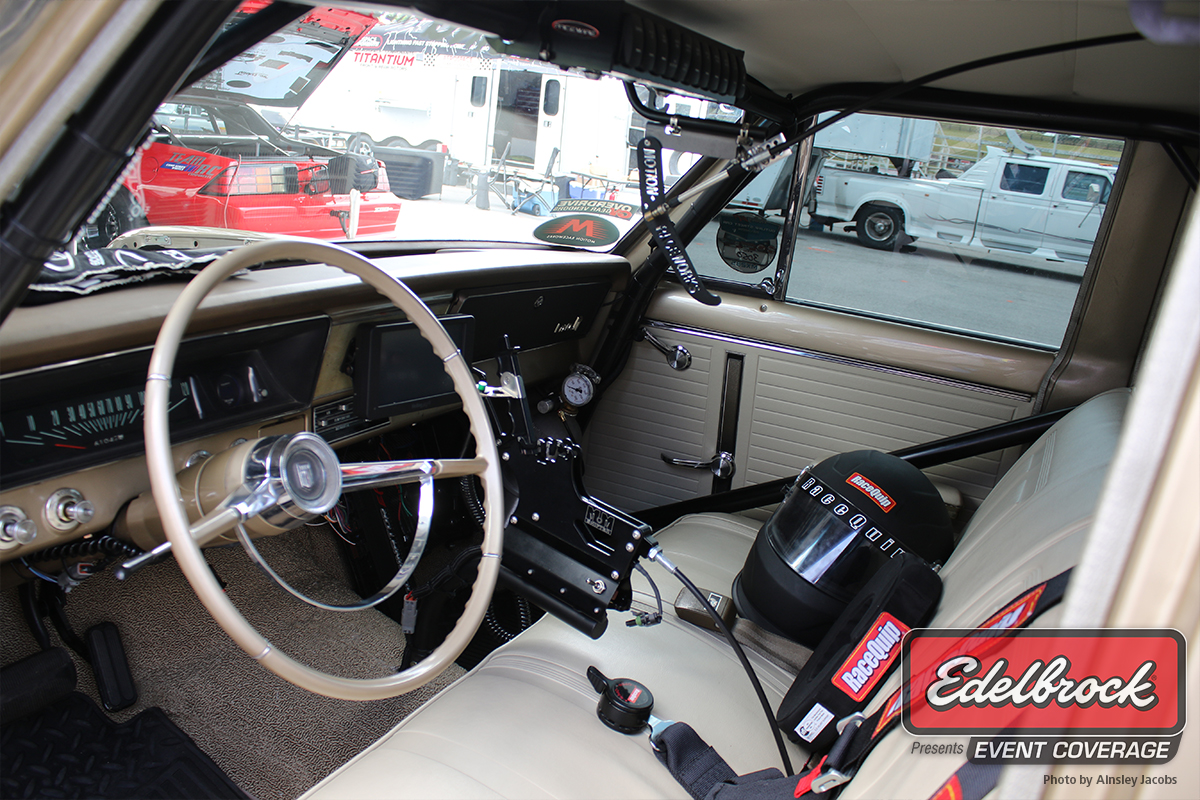 Franklin, Kentucky local Heath Forshee purchased this immaculate 66 Chevy Nova from its original owner, a lady named Gracie, in an estate sale back around 2006. He named the car in her honor, then put love and effort into resorting the body. A 377 ci LS-based engine built by Roberts Precision Machine sits under the hood, topped by Brian Tooley Racing heads and a Holley intake gets an extra boost of power thanks to a Borg Warner 84mm turbocharger from Chris Watkins Midwest Turbo. Backing the bullet is a PTC Powerglide transmission and converter. RC Components wheels perfectly frame the Strange Engineering brakes, while Caltrac rear suspension components ensure the classic Chevy is perfectly driveable whether its out cruising or running the drag strip during True Street competition. On the inside, Forshsee is especially proud of his Nova's original steering wheel, dash, seats, and door panels. 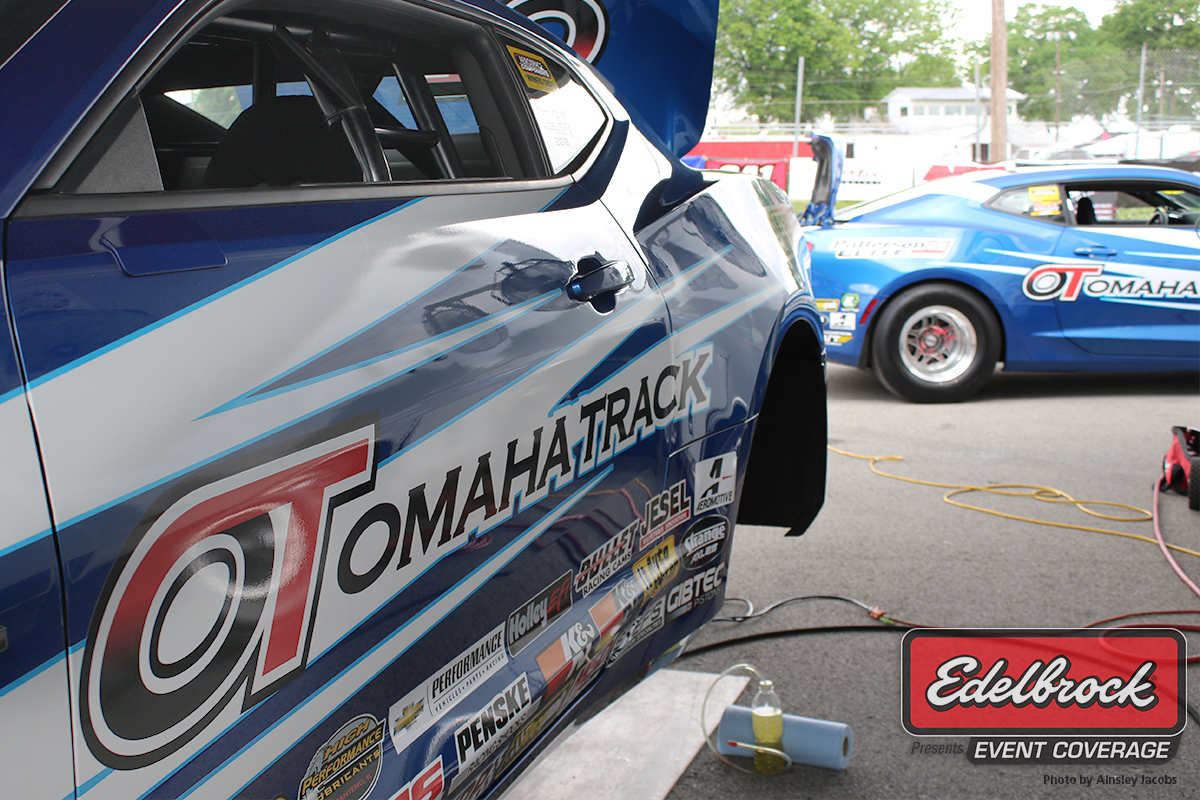 Two nearly-identical Patterson Elite-built COPO Camaros sit in Ted Hughes pits. In Atlanta, the hood pins on his Scoggin-Dickey Parts Center Chevrolet Performance Stock entry (far) failed as he went through the traps and the hood came up, destroying the hood itself, the windshield, and even the roof of the car in process. Repairs were made and it's been running well with no issues so far this time out. Similarly, his Holley EFI Factory Super Cars ride (near) has been throwing curveballs left and right. In Atlanta, Hughes popped two engines in the Camaro when its intercooler pump shut off under load. Despite rewiring the car and adding new pumps, it's still having the same issue although no engines have been injured in Kentucky just yet. He plans to try a different pump, and will persevere until the problem is in the past. 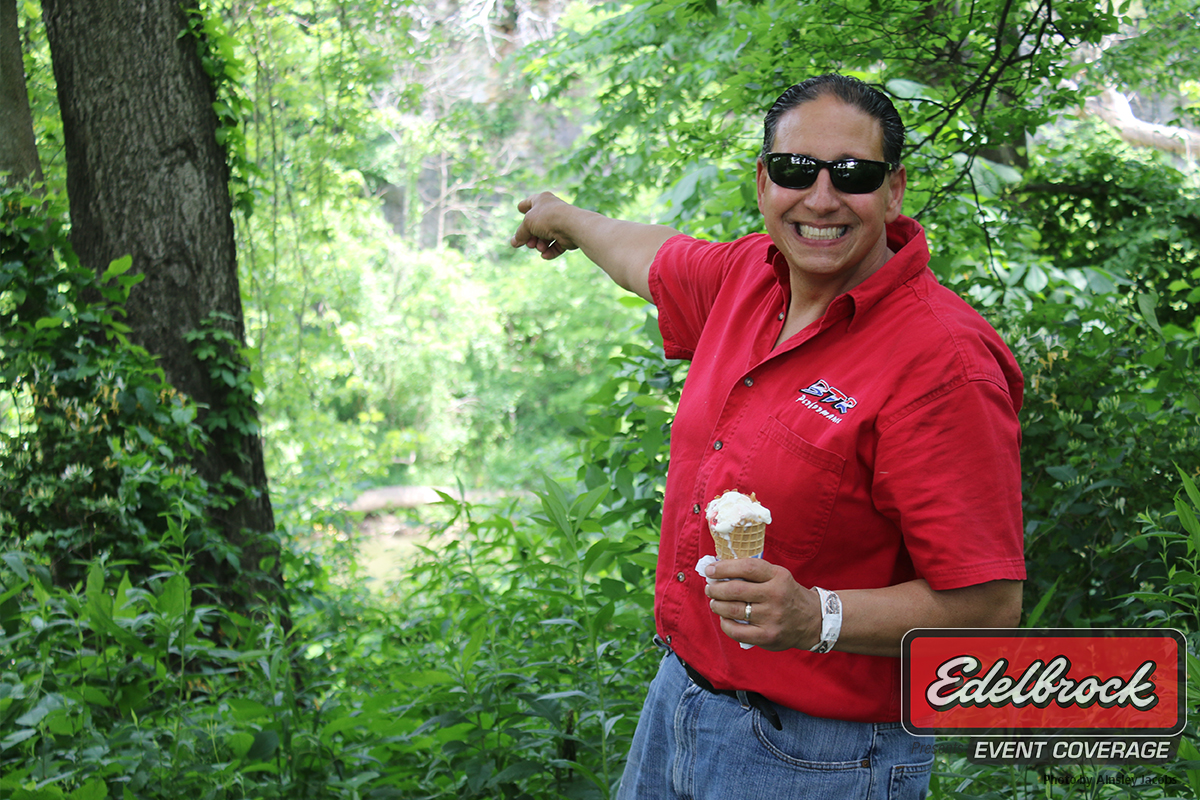 Attention in the pits, attention in the pits. Guided nature walks to the Barren River are leaving every hour, on the hour, courtesy of the current Edelbrock Xtreme Street championship points leader, Bill Trovato. He says the ice cream is optional but highly recommended. 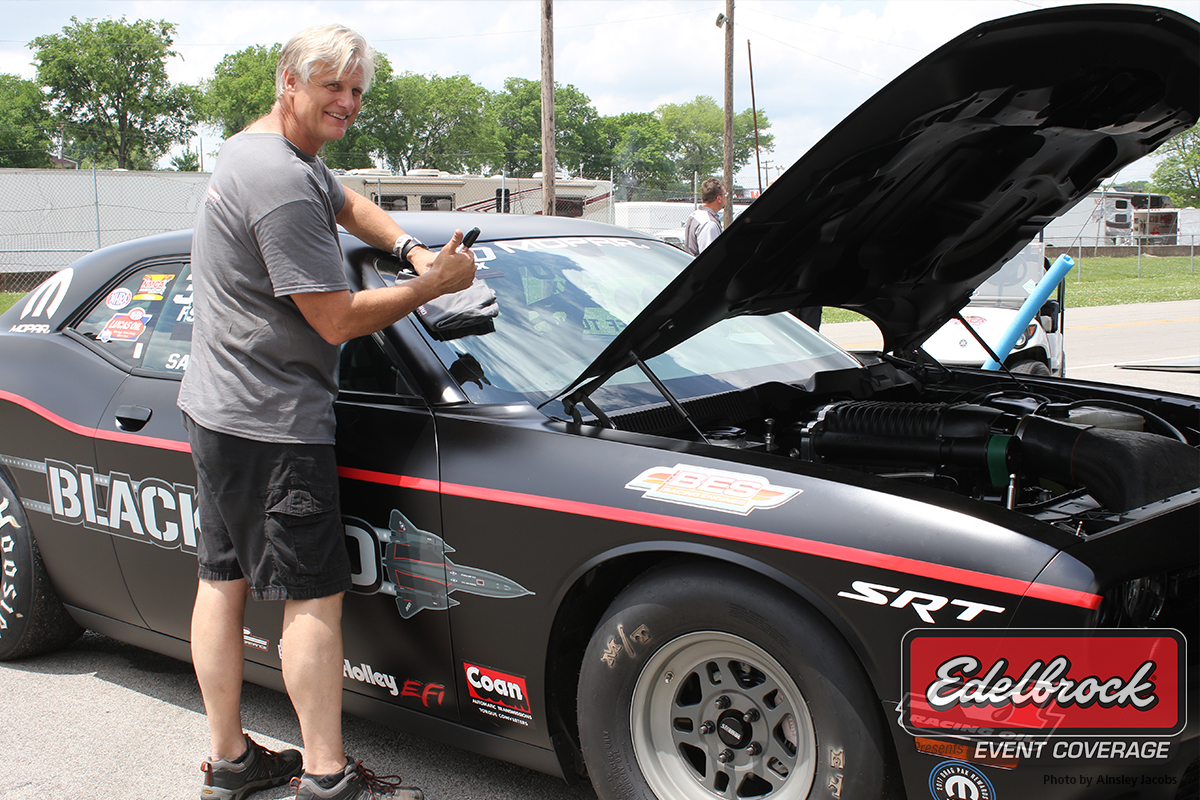 Celebrity sighting! The first-ever Holley EFI Factory Super Cars driver in the 7-second club, Geoff Turk, is on the property with his menacing 2015 Dodge Challenger Mopar Drag Pak known as the SR354 Blackbird. 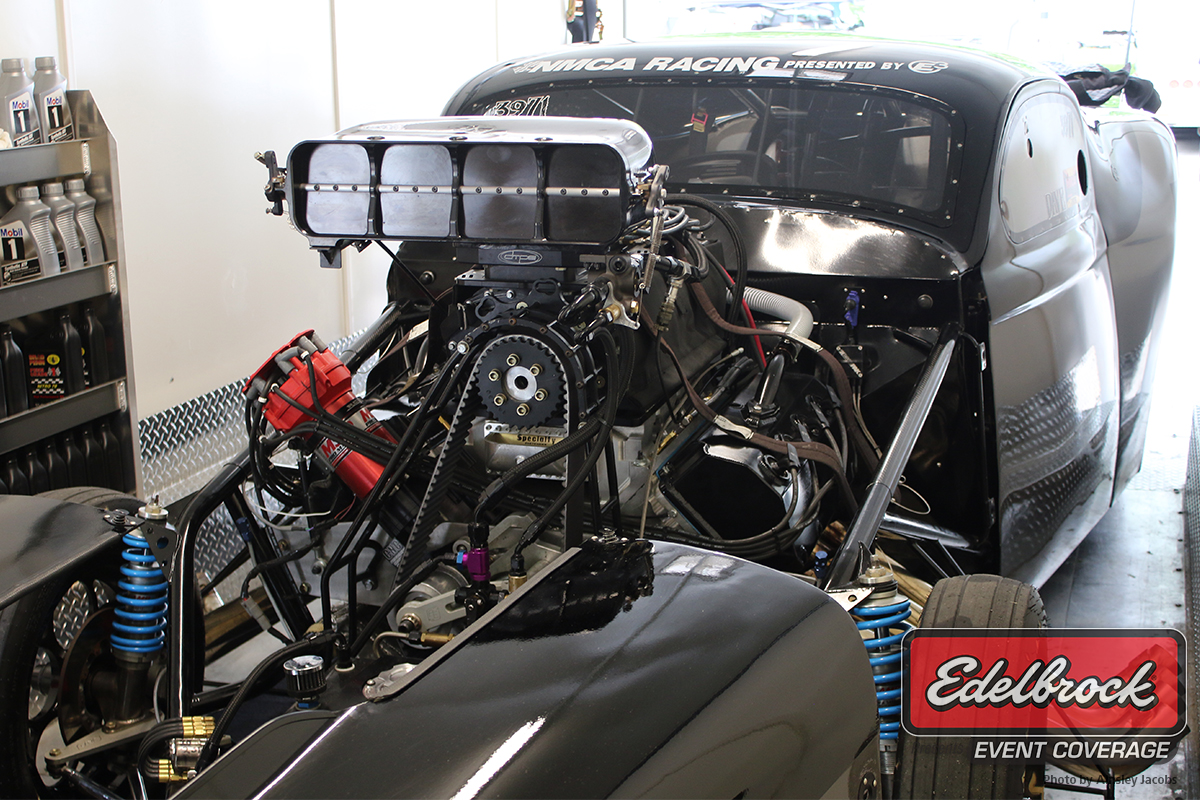 This unique 41 Willys belongs to 75 years young Larry Russell, but it's David Helton who has the honors of being behind the wheel this week in VP Racing Fuels Pro Mod. The home-built chassis features a 521ci Hemi engine from Brad Anderson Enterprises that's topped with a huge blower from DRPE. A Ford 9-inch rearend works in conjunction with Santhuff shocks and Lamb struts, and a full floater rear is coming soon. This is just Helton's second time out with the car, after having taken a hiatus from his former nitrous oxide-focused racing life. So far, the Willys has run 4.03 at 184 mph this weekend, and the guys will be creeping up on the tune as the race progresses. 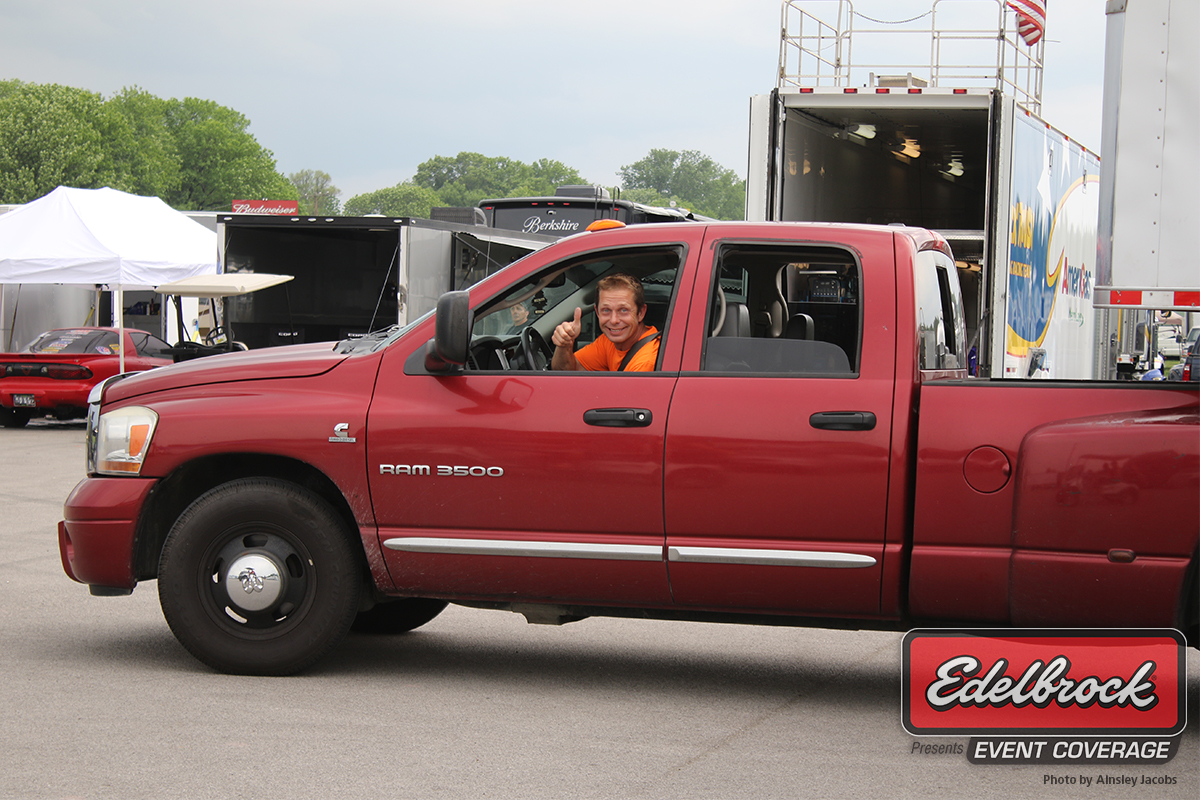 You can't keep a good man down, and there sure is no rest for the wicked. Mickey Thompson Radial Wars driver extraordinaire, Marty Stinnett, has had a hard-luck season so far with several close-contact meetings with the retaining wall including one at the last NMCA race at Atlanta, Georgia. Thanks to help from friends, sponsors, fellow racers, and countless others, Stinnett was able to get his boosted Fox-body Mustang back together after a number of sleep-deprived days and just pulled in to Beech Bend Raceway Park this afternoon, fashionably late, but definitely ready to make an entrance. >>>QUALIFYING RESULTS CAN BE FOUND HERE<<<