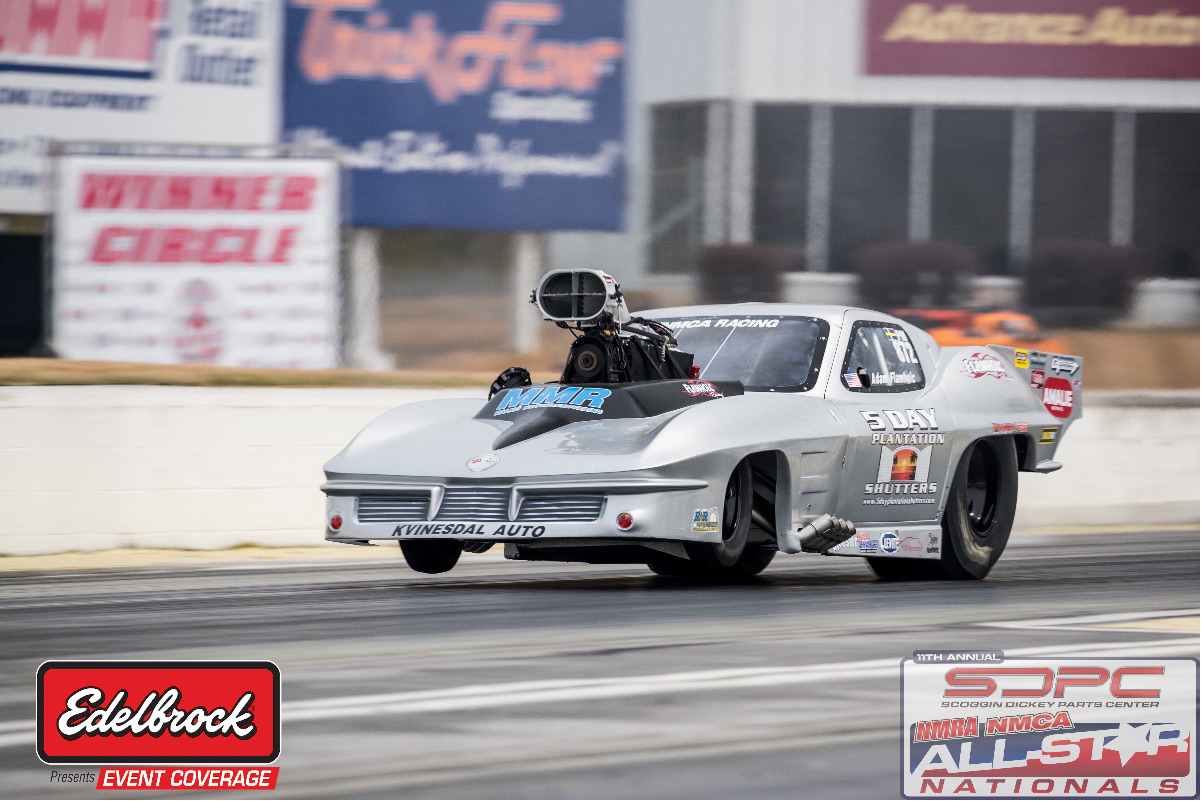 With the rain overnight, the Total Venue Concepts crew is hard at work drying the Atlanta Dragway surface in preparation for today's first round of qualifying at the 11th Annual Scoggin-Dickey Parts Center NMRA/NMCA All-Star Nationals Presented by MAHLE Motorsport. Yesterday was an action-packed day of test n tune runs and more racers were stacked up and ready to claim their pit spots as the action gets underway this afternoon around 2 p.m. Also kicking off its 2019 season here at Atlanta Dragway is the Chevrolet Performance Challenge Series, so if you're an LS or LT engine enthusiast, this is the race for you. Stay tuned throughout the day for updates as racers vie to earn a coveted spot in the Aerospace Components Winner's Circle.

Racing officials have announced a target start time of 2 p.m. today as track drying and racing preparations are underway after an overnight/early morning rainstorm. There will only be one round of qualifying today due to the weather conditions, with the index categories in both series kicking things off. Heads-up classes are scheduled to follow later in the day at 5 p.m.

Amid hundreds of clean runs on Thursday there was an unfortunate incident as Robert Abbot lost a wheel on his VP Racing Fuels Xtreme Pro Mod 1969 Camaro near the top end. The car flipped over and landed on its lid at 182 mph, but Abbott walked away, and it looks like the car can be repaired and eventually return to the track.

Having just picked up this gorgeous Camaro, Lynn Zandbergen brought it out to Atlanta Dragway to run in the Coan Stock/Super Stock Combo class. During the test n tune he ran his second pass ever in the 350-powered car and ran a 10.94 on an 11.70 index.

Racers are pulling in to tech for the Dodge // Mopar HEMI Shootout, which offers the first 75 05 and later Gen IIII HEMI powered Dodge, Chrysler, or Jeep produced vehicles to race with Dodge // Mopar picking up the tab. Peter Mansolillo brought out his 2018 Dodge Demon to run in the class. If he does well enough, he might race in the Arrington Performance HEMI Quick 8 Presented by Red Line Oil on Sunday. This class pits the top-eight finishers in the Dodge // MOPAR HEMI Shootout and enters them in a heads-up competition with the winner driving away with $800 cash, an NMCA Victor award, and a trip to the Aerospace Components Winner's Circle.

With driver James Lawrence arriving last night and weather today, his Dragzine-backed team spent time doing maintenance on his NMCA Mickey Thompson Street Outlaw machine. The 95 Mustang is spending time between races on the eastern side of the country, so the West Coast-based team doesn't get to work on it much between races, so they make the most of the time in the pits. 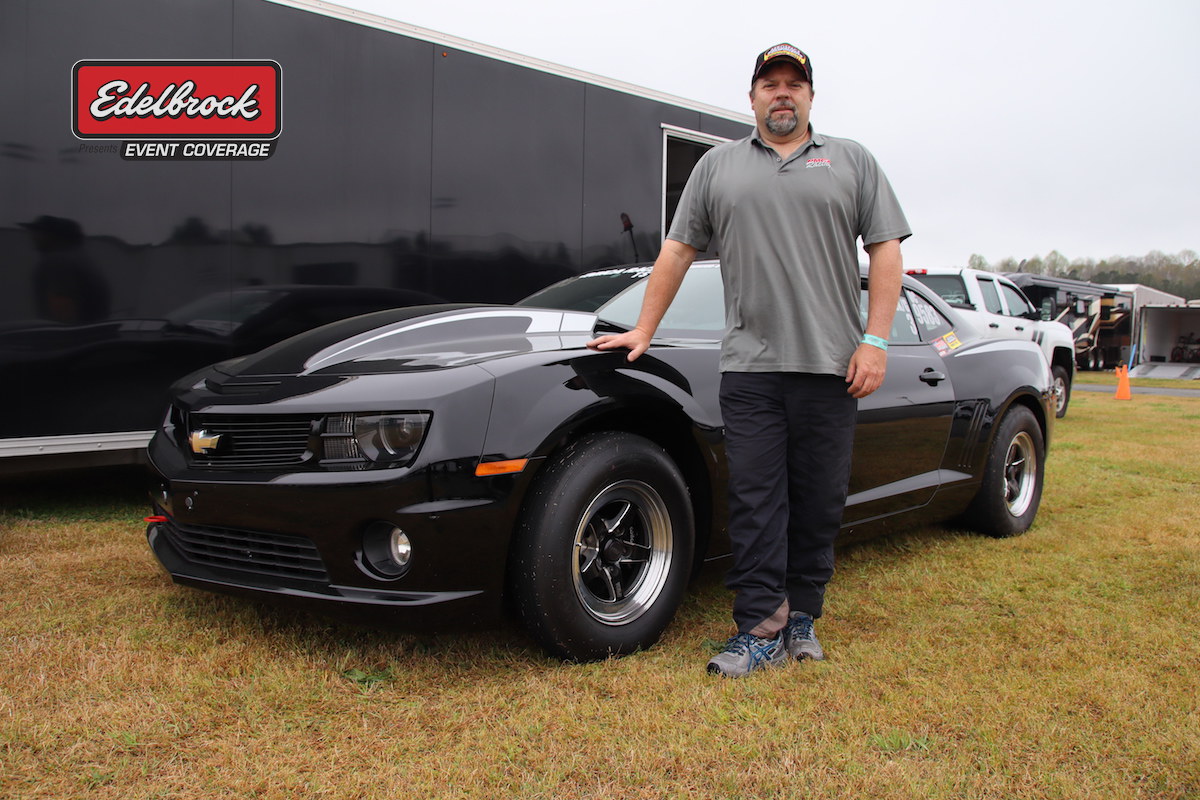 Jeff Brady drove all the way from Hayes, Virginia to double up at this weekend's event, as he's competing in NMCA MagnaFuel Open Comp and Chevrolet Performance Challenge Series LME Street King, and up to the task is his 2010 Camaro powered by a small-block Chevy built by RPM Motorsports and beefed up by nitrous. Brady, who said he would have entered a third or even a fourth category if he could, used yesterday's test session to see what adjustments he would have to make to run as close to his 10.00 index as possible in his car which rolls on Mickey Thompson drag radials. He ended up adding weight to the car's weight box and pulling 5 degrees of timing to slow it down a little, and now he's preparing for today's first round of qualifying.

Jackie Slone's crew was busy taking out some rear steer in their NMCA VP Racing Fuels Xtreme Pro Mod to prepare for the nitrous-assisted 69 Camaro for its first qualifying session, as no other significant changes had been made... yet. 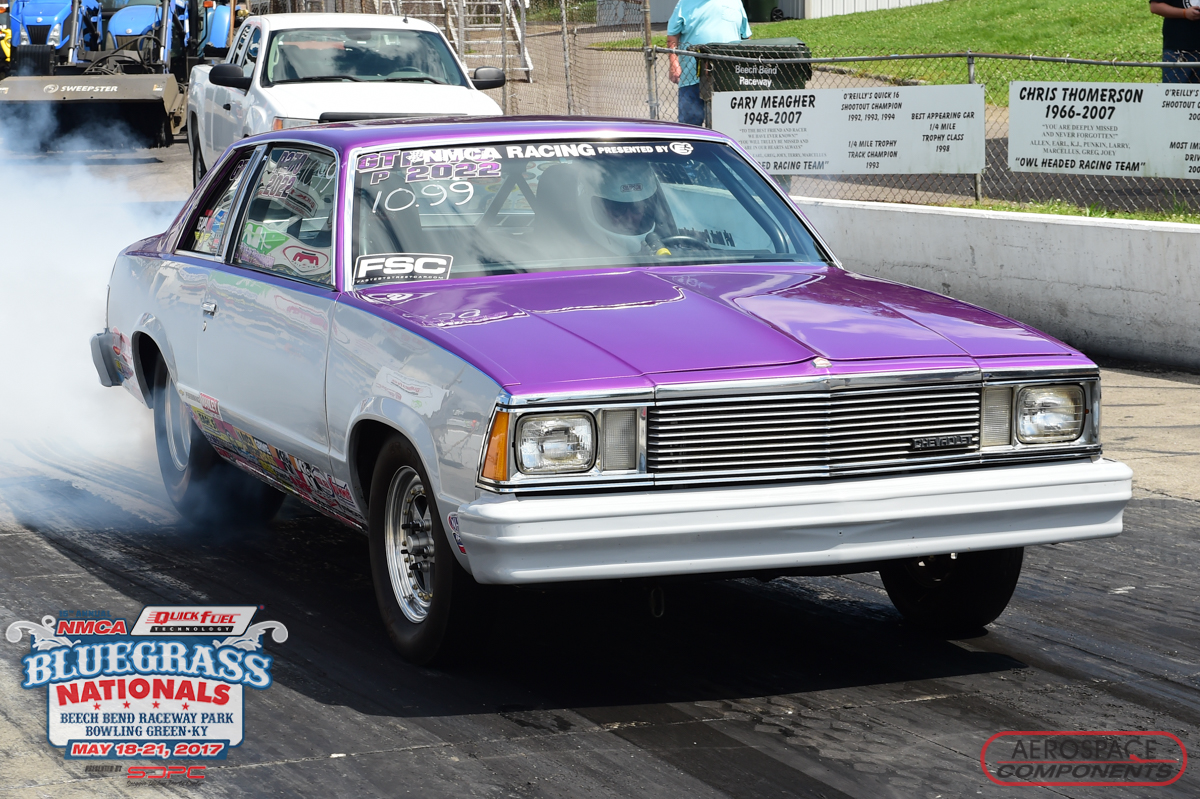 Ricky Pennington repeatedly shows how he earned the MagnaFuel Open Comp and Coan Stock/Super Stock championships in 2017, and most recently, it was at the NMCA season-opener in March in Florida, where he earned the win in Coan Stock/Super Stock Combo in Robert Hindman's Mustang Cobra Jet. Ricky, who's pictured above with his father and fellow racer, Rick, is hoping to earn another win, or even two wins, this weekend, while driving his 1981 Malibu which has a G-Force Racing Transmissions four-speed in Coan Stock/Super Stock and his 1969 Chevelle in MagnaFuel Open Comp, though he admits he has some concerns. I haven't had very much luck lately, said Ricky, while shaking his head. I've driven four cars this year, and I've broken three of them, so hopefully I won't break either of the cars I'm driving this weekend.

Testing comes in all shapes and forms, and Bill Trovato was comparing the nitrous pressure between his usual solenoids and a bigger pair he is ready to run on his Edelbrock Xtreme Street Camaro. The pressure drop with the bigger solenoids was unexpected, but when he finally gives them a shot, Trovato expects his 440-cube LSX-powered 2013 Camaro to pick up a tenth when he gets the bigger kit sorted.

It's not everyday that you see an injector flow test stand in someone's pit, but ProCharger Modified Street Racer Kurt Welfel has a new company called Electronic Fueling Solutions, which offers cleaning, flow balancing, and repair of fuel injectors up to 550 lb/hr. It is his first time at the track with the equipment, so he is running a special for the weekend for those in need of optimized injectors.

Multi-time champion Kurt Anderson, who picked up additional titles in NMCA MagnaFuel Open Comp and LME Street King in 2018, had an easy off-season with only minimal changes. A newly built Turbo 400 from Rodney Massengale and a new gearset in the rear rounded out the changes, and he's keeping an eye on the weather and density altitude to determine whether or not he needs to pull some weight out of his wheelstanding 69 Camaro.

Don Baskin is excited to get busy with his NMCA FSC Carburetors NA 10.5 Chevy Cobalt this weekend, as he had a new 560 ci bullet commissioned from BES Racing Engines. Based around a Dart block and topped with Edelbrock heads and an Edelbrock intake, the engine is backed by an RPM-built Turbo 400. He's never made a pass with this particular conversation he only just got it up and running yesterday.

Scott Libersher, the COPO Connoisseur, has brought a fleet of four (one not pictured) for this weekend's NMCA Holley EFI Factory Super Cars fun. A little trouble earlier this season in Gainesville, Florida, at the NHRA season opener, though, means the COPO Parts Direct-backed team only has one spare bullet for all of its Camaros. Hopefully Lady Luck is hanging out with Libersher Racing this weekend and they wind up not needing it, or more. 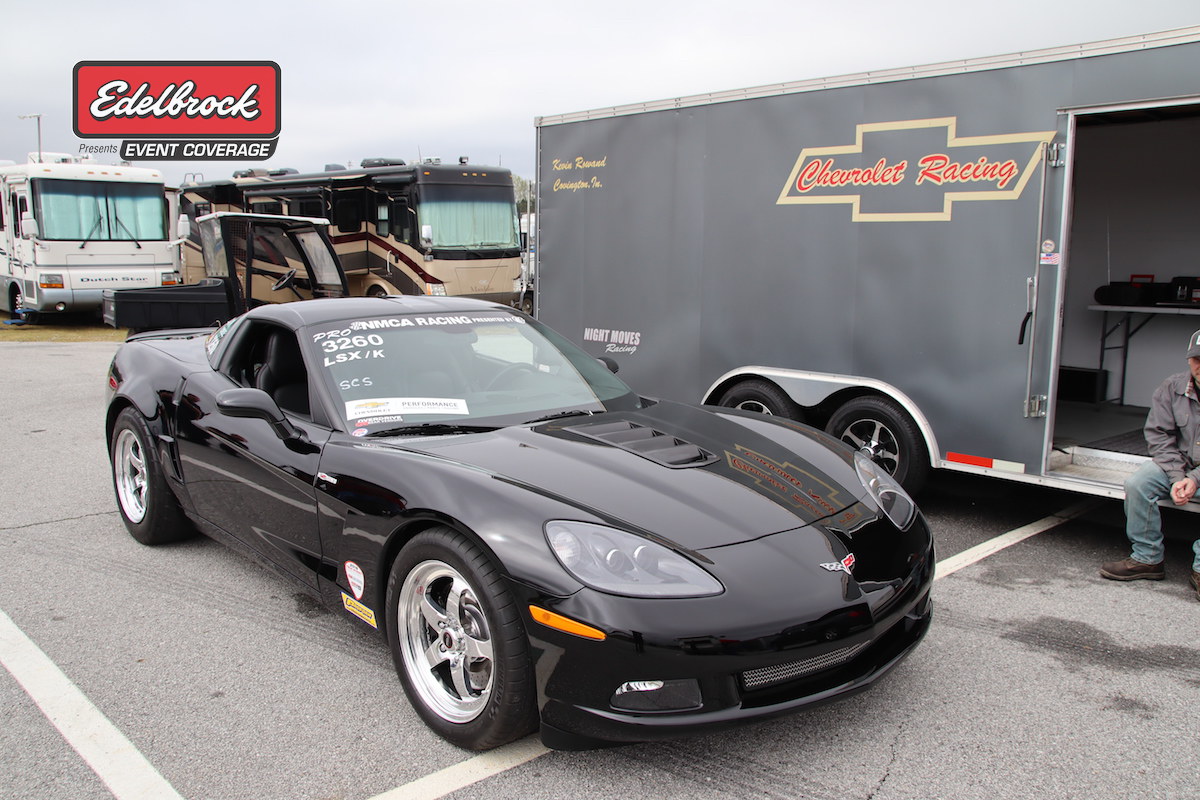 Back in February, Kevin Rowand displayed his Corvette at the World of Wheels at the Indiana State Fairgrounds and won in his category, but this weekend, he's racing it in the Chevrolet Performance Challenge Series Proform Rumble and in the Chevrolet Street Car Challenge. The show-and-go car has a small-block Chevy and a bottle of nitrous for power, and with the exception of changing the valve springs, Rowand left the combination as-is over winter, and he hopes to earn a win in both classes this weekend, just as he did at the NMCA event at Route 66 Raceway last summer in Illinois. I didn't want to touch anything over winter because the car has been running so well, said Rowand.

Ricardo LaCosta drove down from Michigan as he looks to contest the LME Street King category in his 1978 Chevy Malibu. The G-body packs an LS7 engine that La Costa pulled from a junk yard and rebuilt himself. La Costa intends to run the entire five-race Chevrolet Performance Challenge Series for 2019.

Bernardo La Costa drove his 2017 Camaro SS up from Mississippi and while his brother Ricardo (above) competes in Street King, Bernardo will run in the Chevrolet Performance Street Car Challenge and row his six-speed transmission down the quarter-mile.

John Riordan of Duluth, Georgia, has found himself more at home on the road course with his 392-powered Dodge Challenger, but that was something he recently picked up. This weekend, he'll try his hand at drag racing, as he's entered in the Dodge // Mopar Hemi Shootout. For qualifying results, click HERE
All-Star Nationals
,
Commerce
,
Drag Racing
,
Friday
,
Georgia
,
MAHLE
,
nmca
,
NMRA
,
Qualifying
,
Scoggin-Dickey