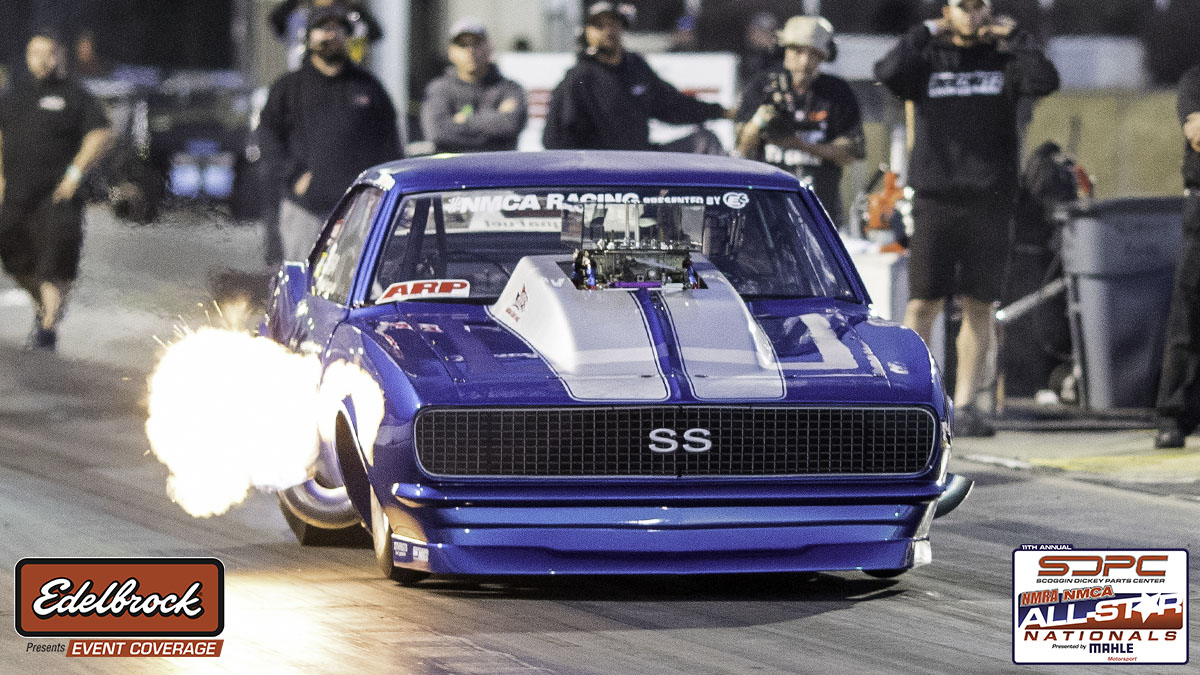 Written by Mary Lendzion The pits were packed and the stands were stuffed at the 11th Annual Scoggin-Dickey Parts Center NMRA/NMCA All-Star Nationals by MAHLE Motorsport, April 4-7 at Atlanta Dragway. That's where drivers in both series made every effort to wheel their cars to the coveted Aerospace Components Winner's Circle, and they put up plenty of personal bests and potential records along the way.

On the NMCA side, drivers in VP Racing Fuels Xtreme Pro Mod put on a show while pushing their cars to the limit. Among them was Daniel Pharris, who stopped the clocks at 3.72 in his Mustang to lead qualifying. Several competitive rounds later, he made it to the final. There he lined up alongside Don Walsh Jr., who, like Pharris, had been consistent and quick all weekend. The tight race saw Walsh Jr. take the win with a 3.72 in his Corvette to Pharris 3.75. Drivers in VP Racing Fuels/Mickey Thompson Street Outlaw faced off for fierce fights, and Phil Hines hauled to a 4.37 in his Mustang to lead qualifying. When he exited eliminations early, Rob Goss and Vinnie Palazzolo got around him and met for an oh-so-close final that saw Goss go .008 on the tree and grab the win with a 4.38 in his Challenger while Palazzolo was right there with a 4.39 in his Mustang.

The ever-exciting Holley EFI Factory Super Cars category saw Bill Skillman blast to a 7.78 in his Mustang Cobra Jet to lead qualifying, but the final round featured Carl Tasca and Paul Roderick and their commanding Mustang Cobra Jets. Tasca, with a slight reaction time advantage, took the win with a 7.83 over Roderick and his 7.87. ARP Nitrous Pro Street saw Tricia Musi, who was celebrating a birthday this weekend, muscle her Firebird to a 4.48 to lead qualifying. She took things all the way to the final against Mark Hoagland and his Camaro. Musi had Hoagland on the tree, but Hoagland had her on the top end, and won with a 4.46 to Musi's 4.55. Edelbrock Xtreme Street/Renegade drivers duked it out at this event, and NMCA's Jessie Coulter cruised to a 4.67 in his Camaro to lead qualifying. Several rounds later, he flew to a 4.73 to take the win over Tim Knieriem, who was quicker than Coulter at the bottom end, but not quite as quick at the top end with a 4.87 in his Mustang. In the high-winding world of FST Carburetors NA 10.5, Leonard Long lapped up a 7.80 in his Mustang to lead qualifying. As he often does, Long remained on point through the final, where he pushed to a 7.81 to defeat Joe Clemente, who was 7.93 in his Mustang. Reigning Chevrolet Performance Stock presented by Scoggin-Dickey Parts Center category champion Jesse Wilson wheeled to a 10.11 in his Camaro to lead qualifying, and on race day, he rolled up next to Haley Burkhammer and her Camaro for the final. Wilson wound up with a 10.24 and the win while Burkhammer posted an off-pace 10.58. In Coan Engineering Stock/Super Stock, Daren Poole Adams arrived at a 9.47 on a 10.90 index in his COPO Camaro to lead qualifying, but in the final, Jeffrey Frees flew to a 9.97 on a 9.90 in his Challenger to win over Mark Ruset, who ran to an 11.96 on an 11.88 in his Camaro. In Quick Fuel Technology Nostalgia Super Stock, Jeff Frees led qualifying with a 9.25 on a 9.25 index in his Barracuda, but it was his brother, Tim Frees, who made it to the final. There he secured a 10.52 on a 10.50 index in his Savoy to push out Corky Bumpus, who ran 10.76 on a 10.75 index in his Barracuda. Mike Moistner managed a 12.00 on a 12.00 index in his Mustang to lead qualifying in Detroit Truetrac Nostalgia Muscle Car, but it was Chad Brewer and reigning class champion Andy Warren who went to the final. Brewer picked up the win with a 10.52 on a 10.50 index in his Nova, while Warren was 10.04 on a 10.00 in his Caprice. Fresh off a win at the season-opening NMCA race in Florida in March, Cameron Bowles put up a .004 in his Maverick to lead qualifying in MagnaFuel Open Comp. For the second race in a row, he made it to the final, but this time, Kelly Pierce had positioned himself for the win by recording a better reaction time and running right on his 10.17 dial in his Malibu, while Bowles was 9.22 on a 9.19 dial. A special feature at all six events on the NMCA tour is the ever-growing Dodge // Mopar HEMI Shootout. At this event, David Clarke was the overall winner with a 9.52 average in a Hellcat while Todd Chasson was the runner-up with a 10.15 average in a Demon. Richard Stimson was the 10-second winner in a Demon, David Hamilton was the 11-second winner in a Charger, Robert Pitt was the 12-second winner in a Challenger and Mike Smith was the 13-second winner in a Charger. Michael Oellrich pushed to the 14-second win in a Challenger. Later, the eight quickest drivers in the category came together for the Arrington Performance HEMI Quick 8 presented by Red Line Oil. When the dust settled, Todd Classon landed the win with a 10.26 in a Demon while Peter Mansolillo was 10.33 in his Demon.