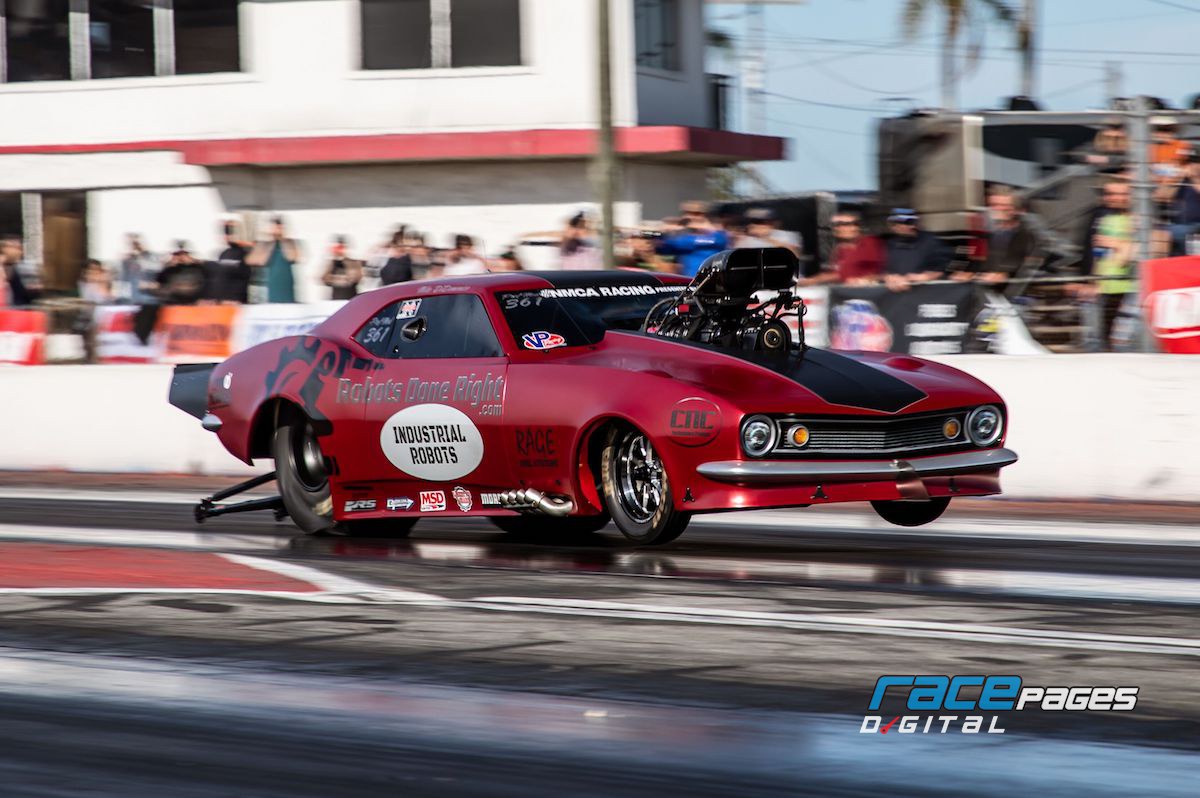 By Mary Lendzion Photos by NMCA and courtesy of Mike DiDomenico While Mike DiDomenico was winning races in an Outlaw Dragster, he decided a few years ago that he wanted to try to do the same in a Pro Mod. So, he hired G-Force Race Cars to build one that would feature a 1968 Camaro body and a 521 cubic-inch Brad Anderson Hemi prepared by Rage Fuel Systems and topped with MBE heads and a Brad Anderson intake. The SSI supercharger helps the combination crank out 3,200 horsepower, and a Liberty's five-speed transmission helps put helps put that power to the pavement. DiDomenico dove into PDRA action at various tracks, and earned a win in the series last fall, and he dove into R&R Auto Body, DeCerbo Construction and P2 Contracting Rumble Extreme 8, a series at Summit Motorsports Park in Ohio. Despite having transmission trouble when he introduced his car to NMCA VP Racing Lubricants Xtreme Pro Mod at the series event at Summit Motorsports Park last year, he was immediately interested in continuing to compete in the category, and over winter, DiDomenico, who had driven to a best of 3.68 and 201 mph, and his son, Sal, who is also his crew chief and right-hand man, began preparing for 2020. They freshened the engine at the shop they own together, CNC Performance Products in Ohio, and turned the supercharger over to SSI for some massaging. 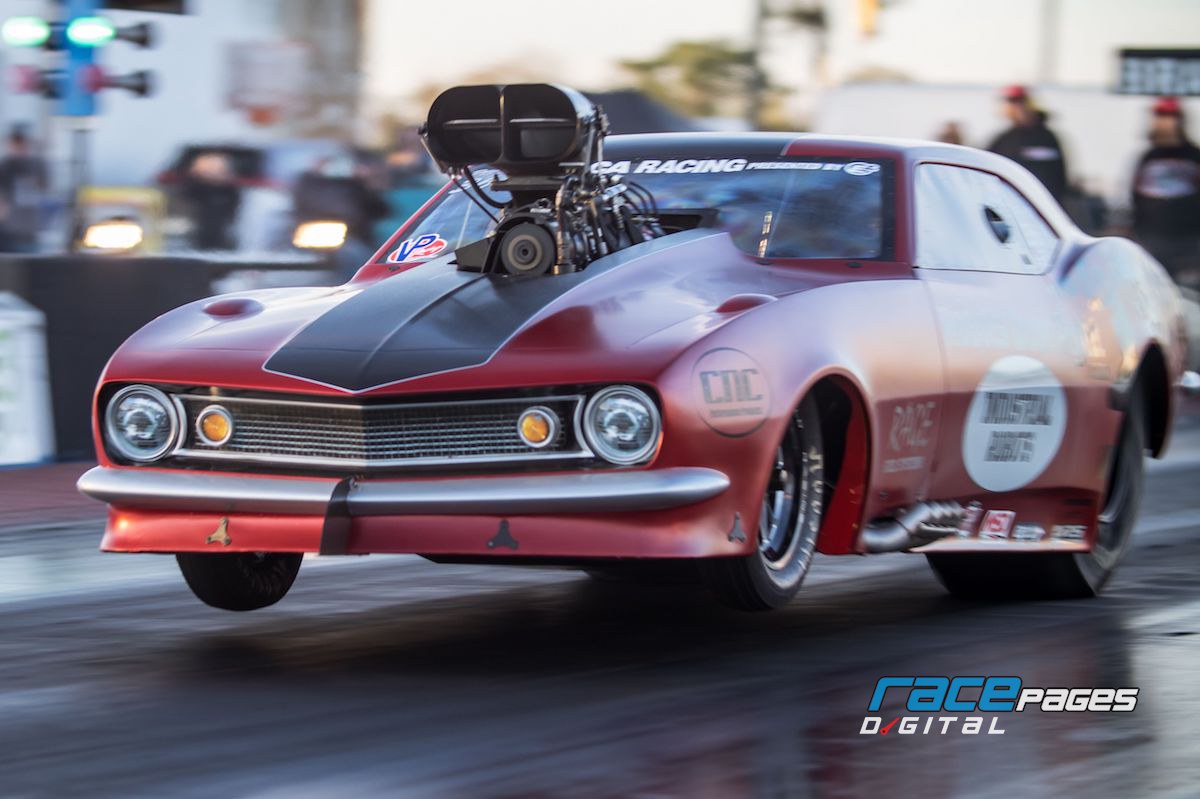 After the work, SSI put the supercharger on the dyno to see the changes, and I'll tell you, when it spools up, it's pretty cool, said DiDomenico. Meanwhile, Sal made a change in the gearing in the Liberty's five-speed transmission, with input from Liberty's. We found that we were dropping a little too much rpm at the shifts, so my son, Sal, decided we should made some gear changes, and he called Liberty's to discuss his ideas and then tore into the transmission, said DiDomenico. When the last bolt was in place, the hardworking father-and-son, as well as their equally hard-working crew members Adam Stablein, Gary Lucas and Blake Molnar, bee-lined for the first NMCA event of the year, the 18th Annual NMCA Muscle Car Mayhem presented by Holbrook Racing Engines in March at Bradenton Motorsports Park in Florida. They arrived early enough to make some test passes before qualifying. We spent a good portion of the first few days testing different suspension settings and trying beadlock wheels for the first time, said DiDomenico. We really wanted to get the beadlock wheels to work because they're lighter, but we couldn't control the wheel speed, and we were blowing the tires off at the starting line. The car wasn't happy about it, and we broke a suspension part, but my son, who's a welder, fixed it, and we went back to our regular wheels. Then when we thought we were having trouble with our Davis Box, Adam Flamholc offered to let us use his spare Davis Box, but then he helped us figure out that what we really needed was a new transbrake button, not another Davis Box, so we put in a new transbrake button. 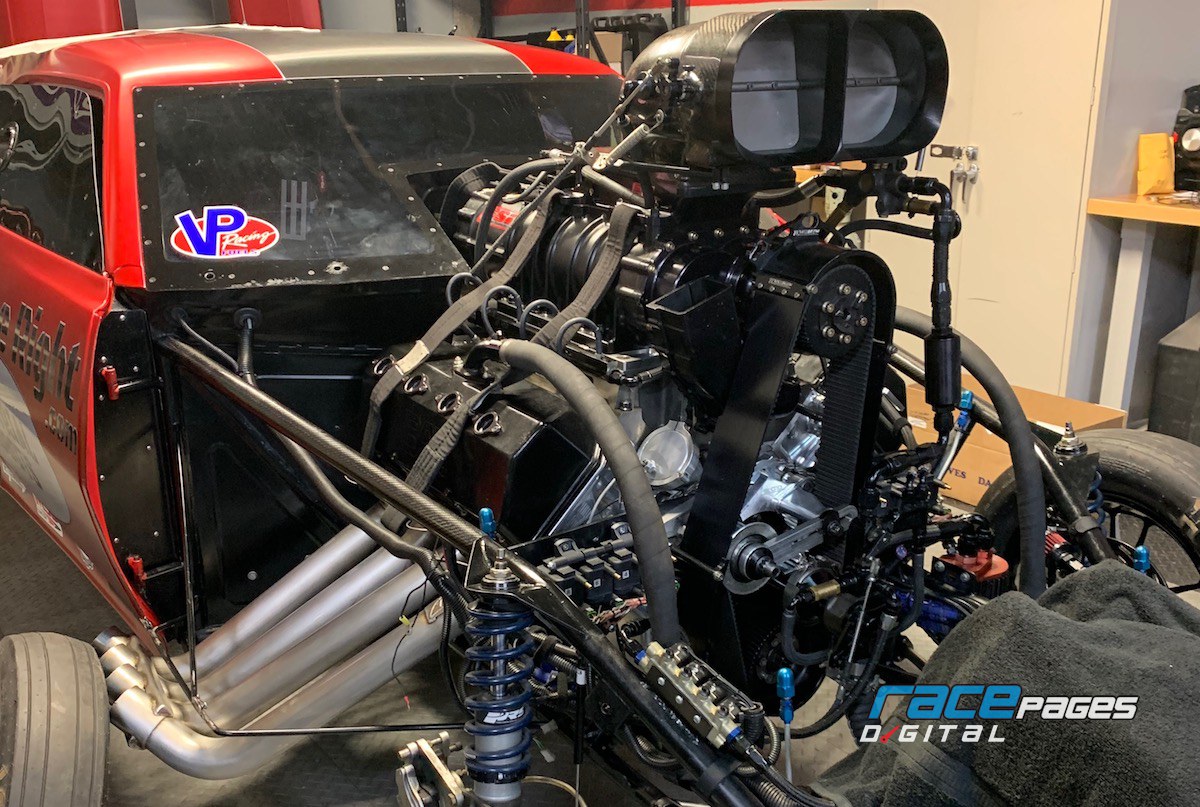 Despite all of that happening in testing and qualifying, DiDomenico, in just his second time competing in NMCA VP Racing Lubricants Xtreme Pro Mod, laid down a 3.74 to qualify in the fifth spot in the full field of sixteen cars, followed by an even quicker 3.72 and then 3.77 to get past the tough competition in the first and second rounds of eliminations. He was forced to get out of the throttle in the semifinal round of eliminations and lost to Eric Gustafson, who went on to win the race and set VP Racing Lubricants Xtreme Pro Mod records with a 3.63 and 207 mph. We had luck on our side, said DiDomenico, who flies banners for Robots Done Right, Tub O Towels and CNC Performance Products on his commanding red car. When we got home from that event, my son, Sal, made another gear change in the transmission and in the rear-end after looking over all of our data. With that, DiDomenico, who's currently holding down the fourth spot in NMCA VP Racing Lubricants Xtreme Pro Mod points, is ready for the 12th Annual Scoggin-Dickey Parts Center NMRA/NMCA All-Star Nationals, June 25-28 at Atlanta Dragway, and plans to take part in the rest of the events on this year's NMCA tour. 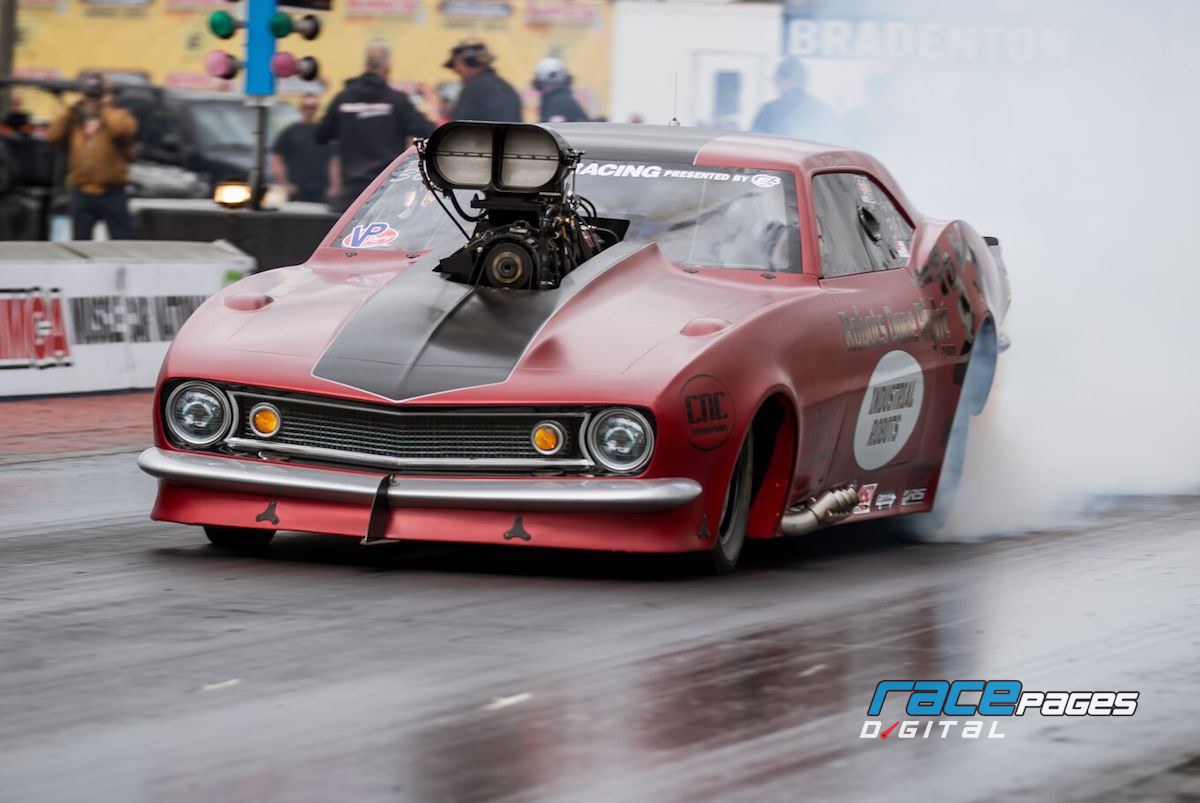