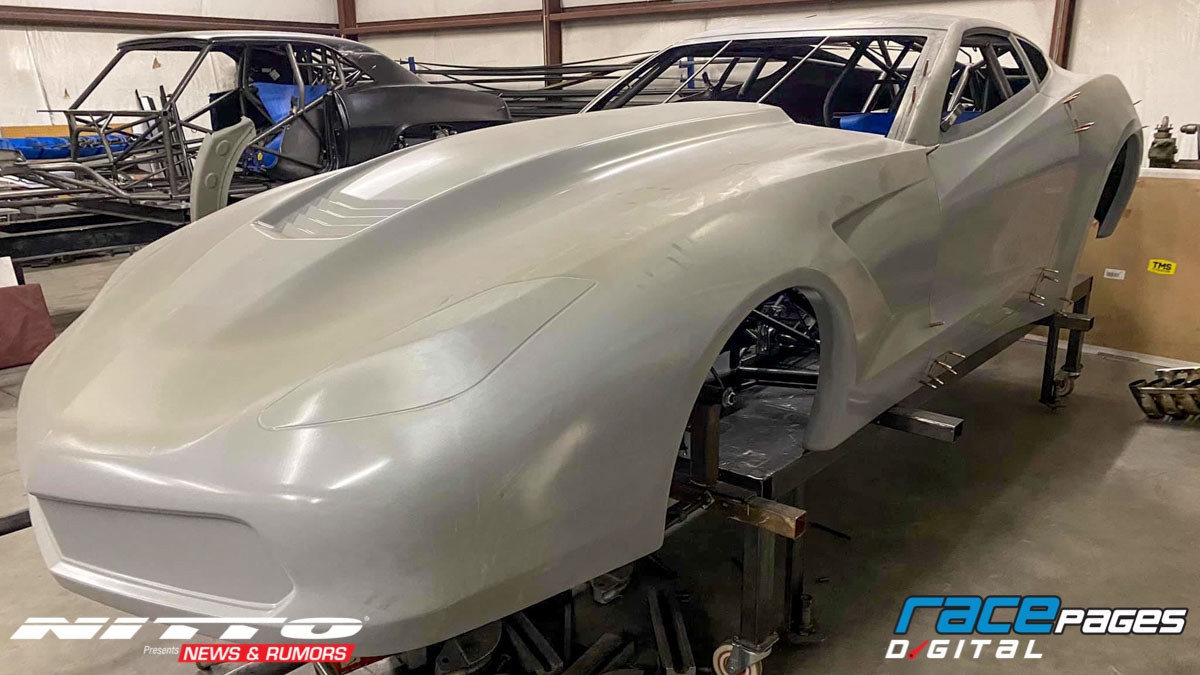 David Reese, the legendary man behind the monster builds from his Reese Brother Race Cars chassis shop, has proven time and time again that he's on top of the world when it comes to small-tire, radial racing. Now, he's decided to expand his prowess to conquer big-tire Pro Mod, too. Located in Temple, Georgia, Reese Brothers Race Cars has been building cars for years. A recent build, J.R. Gray's Head Shot Camaro captured a $70,000 Radial vs the World win at its very first event the Sweet 16 3.0 race at South Georgia Motorsports Park and Reese's own El Diablo 2.0 has had tremendous success. Reese partnered with Rick Thornton of Fast Forward Innovations (FFI) earlier in 2020 to provide the engine program for his car, and the two have forged a strong partnership when it comes to collaboration. Thornton is having Reese build a new Pro 275 car for his own use, but, when Thornton decided to ditch his Synergy Composites Corvette body in favor of one from Larry Jeffers Race Cars, Reese had an idea. I was in a lull, work-wise, so I started on a chassis and decided to shelve it once I was done in case someone wanted a car, I'd be that much further along, noted Reese, who wound up being commissioned to build three new cars shortly after starting. I had to finish it and get it off the jig quick. The timing coincided with a hefty weight penalty being slapped onto his Radial vs the World ride, so, Reese simply decided to go racing elsewhere NMCA VP Racing Lubricants Xtreme Pro Mod. Although Reese ran on a big tire for nearly a decade in Pro Mod with ADRL and PDRA before his recent and explosive small-tire radial success, he doesn't actually like the large slick-equipped cars. I like to look at em, but I don't like to tune or drive em, laughed the builder, who knows that driving one will ultimately enable him to explore alternative avenues for his business. I had been tip-toeing around Pro Mod up until now because it isn't my niche.

Reese's Pro Mod chassis itself will be a 25.1 SFI certified work of art, while Thornton's Pro 275 will carry a 25.2 SFI certification. I build all my cars the same way and make them as light as possible, noted Reese, who has perfected his winning formula over the years. It's been the same ever since my blue Corvette it was the same for El Diablo 1.0 and 2.0, the same as Timmy [Meissner] and J.R. Gray I don't deviate from my design. Christened El Diablo 3.0, the Pro Mod Corvette will carry on Reese's chassis legacy as a near-duplicate clone of its 2.0 radial-focused predecessor. For power, Reese will stick with the same Noonan Engineering-built, small-block Hemi and PSI screw-blown combination that he used in El Diablo 2.0 as well, and it will be backed by a five-speed Liberty transmission with a TyDrive lockup and Neal Chance torque converter. Plans are to have the same potent setup in Thornton's so as to maximize data and parts compatibility. A Strange Engineering modular rearend and Menscer Motorsports purpose-built shock and strut package will all be installed as the badass big-tire build progresses. I reached out to [Todd] Tutterow for help with the big-tire stuff, said Reese. I want his guidance on how to set up the four-link, how I should apply power early on, and things like that. Given that Reese and Thornton will be campaigning their cars together throughout 2021, a cohesive look has already been decided on. The Pro Mod will be painted a shiny version of what I have now [on El Diablo 2.0] with black accents, while Rick's car will be the opposite white with black and maroon accents, noted Reese of how the two will be visually differentiated while sharing so many similarities otherwise. Plans for 2021 are still somewhat fluid, depending on government regulations regarding the rapidly changing Covid-19 situation, but Reese hopes to start testing in February and intends to attend the complete 2021 NMCA drag racing series with his new Pro Mod Corvette. He's also aiming for select ADRL or MWPMS events and various radial tire races where he'll either be driving or working with customers. Aside from his core focus of chassis work, Reese's business model has been to build a car, prove it, then sell it. All of the cars he competes with are for sale, and his latest will help him tap into a whole new market. Our end goal was to be a top contender in Pro 275 and Radial vs the World, added Reese of his plans with Thornton. Now, we want to be the top in three including Pro Mod.
David Reese
,
NMCA VP Racing Lubricants Xtreme Pro Mod
,
Pro Mod
,
Reese Brothers Race Cars