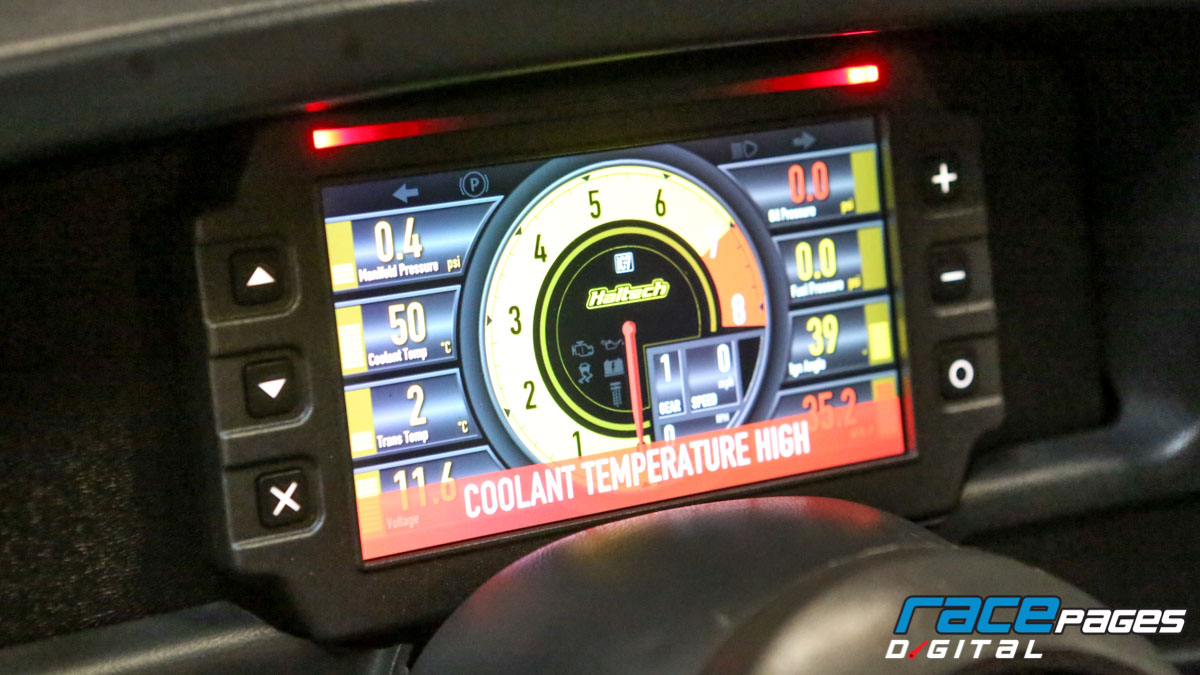 In 1817, the German engineer Dietrich Uhlhorn invented a device to measure machine speed and it was dubbed the tachometer. Fast forward to the 1960s and the first golden age of hot rodding saw its use became common in all types of vehicles. By the time the Mustang boom kicked off in the 1990s, an Auto Meter Monster Tach and corresponding shift-light became commonplace, along with a cowl-mounted fuel pressure gauge, as they were as much status symbols as they were tools for information. Today, data is widely regarded as the world's most valuable commodity. Mechanical gauges are still cool and useful, but with the sophistication of engine management systems, digital displays are common. The latest player to step into the arena is Haltech. For 34 years, the Australia-based company has designed and produced engine management systems. Late last year, the company announced the IC-7 digital display for use with all Haltech ECUs via the CAN network, and a second unit designed for use with OEM engine management systems via the OBD-II access port, also using CAN. The IC-7 offers a 7-inch display screen with six buttons integrated into the housing for screen control. Engineers elected to skip a touchscreen capability after consulting with several racers and car builders, thus relying on buttons along the perimeter for dimming, cycling through the screens, and alarm controls. The purpose was to keep the display as clean as possible instead of constantly cleaning fingerprints off it. The built-in shift indicators are made up of 14 LED lights and are completely configurable, including the color. They can also double up as warning indicators for any sensor that is run through the Elite engine management system. The tachometer in the IC-7 is dramatically more sophisticated than the one designed in 1817. It can be composed as a needle-style tach or bar graph, and units of measure for each can be imperial or metric Lambda or AFR is also available for other sensors. Alarms and the aforementioned on-screen warning signal/shift light is available for any sensor, as well. The IC-7 carries an IP66 water resistant rating for those times when your topless whip gets caught in the rain. We got our first glimpse into the IC-7 during the Performance Racing Industry trade show, held during the off-season in Indianapolis, Indiana. We got our hands one shortly thereafter when our buddy Mike Jovanis was one of the first to receive one. You should be familiar with Jovanis 1989 Mustang LX, as it has been the subject of quite a few technical stories in this rag and has been successful at NMRA events with nine victories in QA1 True Street. Jovanis also garnered a prominent amount of attention with his exploits during Hot Rod Magazine's Drag Week a few years ago. To review its running gear, a DiSomma Racing Engines 349ci small-block Ford with Trick Flow High Port 250 cylinder heads and box intake manifold powers the Fox Mustang, and the 8.2-deck bullet receives plenty of boost from a Garrett GTX 88mm turbocharger. The 1,600-horsepower street machine benefits from a Hughes Performance Powerglide transmission with a SSX bolt-together torque converter. Jovanis best time to date in the 3,300-pound vehicle has been 7.55 seconds at a top speed of 182 mph. Controlling all of it is a Haltech Elite 2500T engine management system, which was configured by Brian Friedentag, a New Jersey tuner who is more commonly known as Freezy throughout the Internet. Adding the IC-7 to Jovanis Mustang was relatively simple; it replaced an older digital display due to desire to modernize the data stream for racing and street cruising scenarios. The IC-7 comes pre-programmed with six different screens for those who like a simple and standardized layout. However, for the creative and ambitious, the Haltech software allows full customization and nearly limitless screen configuration options. The added bonus is that you could work on the unique display designs from the comfort of your couch without the need to be connected to the device and simply upload them when you go back to the garage. Installing the hardware is easy with a variety of mounting solutions and Haltech includes a simple template to ensure the bolt holes are drilled properly. The IC-7 is connected to the ECU using a Haltech-supplied wire. Jovanis chose the blank version of Florida 5.0's Fox Mustang dash panel which serves a perch for the IC-7 in the factory gauge cluster. The aforementioned template made it simple to drill the mounting holes. A few wires had to be traced for the blinker and high-beam indicators that are now integrated into the IC-7 LED lights, eliminating the need for an independent set of warning lamps that Jovanis utilized with his previous display. Jovanis put the IC-7 through its paces during the Nitto Tire NMRA Spring Break Shootout and he reported no visibility issues in the sunny conditions during the cruise or on the drag strip. Its dimming capabilities proved useful when the team jumped in the Street Car Shootout on Saturday night. It enabled him to reduce the brightness so it was far less distracting, but also very readable in the low light. Adding the IC-7 fits form and function by offering a customizable data stream in a good looking package to enhance the appeal of your vehicle's cabin. Source Haltech (888) 298 8116 Haltech.com
Digital dash
,
Haltech
,
IC-7
,
instrument panel