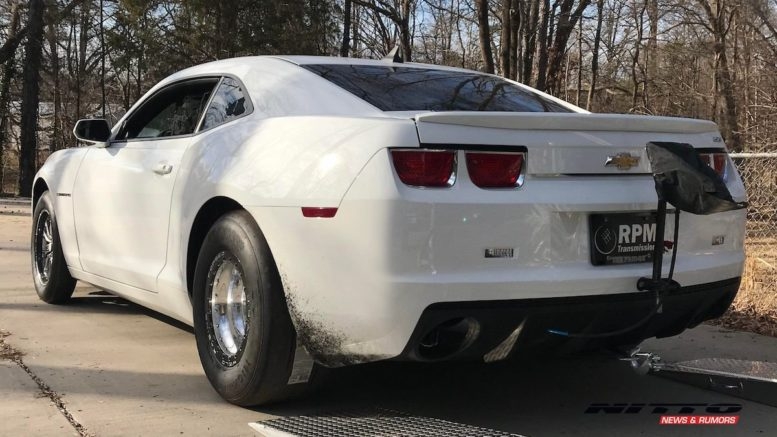 Jeff Heintz has been a formidable force in his Fourth-Gen Camaro in Chevrolet Performance Stock presented by Scoggin Dickey Parts Center since joining the category in 2019. He has earned two third-place finishes and a championship, and he has run as quick and fast as 9.86 and 133 mph. Now he's taking another step by setting up a Fifth-Gen Camaro that he and his late friend, Jeff Hagaman, had purchased from Rodney Massengale of RPM Transmissions back in 2014. It was the RPM Transmissions shop car, and the first Fifth-Gen to get into the 8s, when we got it from Rodney, and Jeff and I were in the process of deciding which direction we wanted to go with it when he was killed in a racing accident, said Heintz, who was devastated. I didn't want to do anything with the car at that point, but then recently, I decided that Jeff would not have wanted it to just sit, and I do not want it to just sit either. So Heintz, who owns Heintz Racing in Mooresville, North Carolina, decided to start preparing the car for Chevrolet Performance Stock presented by Scoggin Dickey Parts Center, a very competitive category where the current record of 9.839 is held by Ronnie Hackelton and the current record of 134.32 mph is held by Glenn Pushis. For the project, Heintz purchased a new DR525 engine from Scoggin Dickey Parts Center, and he'll pair it with the RPM Transmissions-built Turbo 400 and Coan converter that he had been running in his Fourth-Gen Camaro. In addition to the transmission and converter that I was using, all of the electronics will switch over, said Heintz. While his Fourth-Gen Camaro is set up with a torque arm, Heintz worked with Turn Key Automotive for a COPO solid axle conversion kit for the Fifth-Gen Camaro, which came with an 8.50-certified cage. Turn-Key Automotive helped me with the rear end, brakes, and all of the bars, plates, and brackets that I needed, as well as the anti-roll bar, and my friend, Scott Bagshaw of Bagshaw Hot Rod Fabrication installed the Turn Key Automotive components,  said Heintz. Recently, Heintz began removing from the formerly fully-equipped car parts that he won't need. I am going through the car to lighten it up, and I pulled out all of the speakers, sound-deadener, heater and air-conditioner, and extra wiring, said Heintz, who is planning to roll on Strange suspension components and Mickey Thompson drag radials wrapped around Bogart wheels. We have a book from Turn Key Automotive that shows how to build the car up. While Heintz is also working on cars belonging to NMCA racers Terry Faust, Tommy Dabbs, Don Dixon, and NASCAR racer Alex Bowman among others, he's aiming to have his Fifth-Gen Camaro done in time for the first NMCA race of 2022, the 20th Annual NMCA Muscle Car Mayhem, March 17-20 at Bradenton Motorsports Park in Florida. I m looking forward to getting into the car and racing it, said Heintz. It felt like unfinished business since Jeff died, and this feels like the right step. I know that it will be like starting over, and I am not sure what to expect from the car, but I can't wait to see what we can do. While a few people have expressed interest in purchasing Heintz's Fourth-Gen Camaro, he's not ready to part with it and said he might set it up with a turbo combination and take on No Prep racing when he's not NMCA racing.
Chevrolet Performance Stock presented by Scoggin-Dickey Parts Center