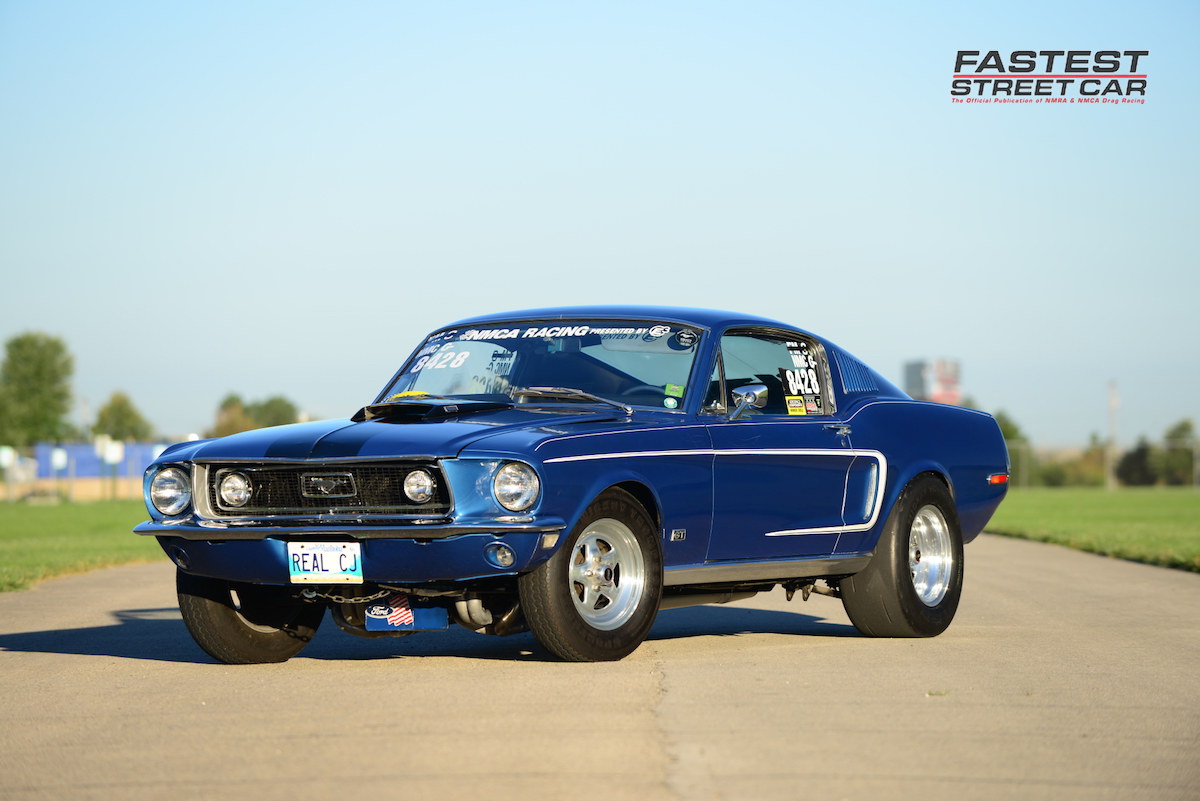 As soon as they arrived, he would watch car after car cruise down track, and talk about which ones he wanted, but because he couldn't afford to purchase any of them, he purchased a motorcycle at the age of nineteen.

It was a Kawasaki 500 Triple, and it was the fastest one he could get his hands on.

I had never rode a motorcycle, so the salesman started it for me and I rode it around the parking lot for an hour before I could venture out, said Fotti, with a laugh. When I finally did, I nearly killed myself because some guys had pulled out next to me in a Road Runner, and the driver stood on the gas, so I cranked the throttle and that's when I nearly crashed.

It didn't take long for Fotti to get the hang of it, but when the snow fell, he parked the motorcycle and climbed into a 1955 Pontiac. He had planned to drive that car through winter, but instead, he wrecked it while doing laps in a park after hours. By March of 1971, he had gone to look at a 1967 Mustang with a 390 cubic-inch engine at a dealership. 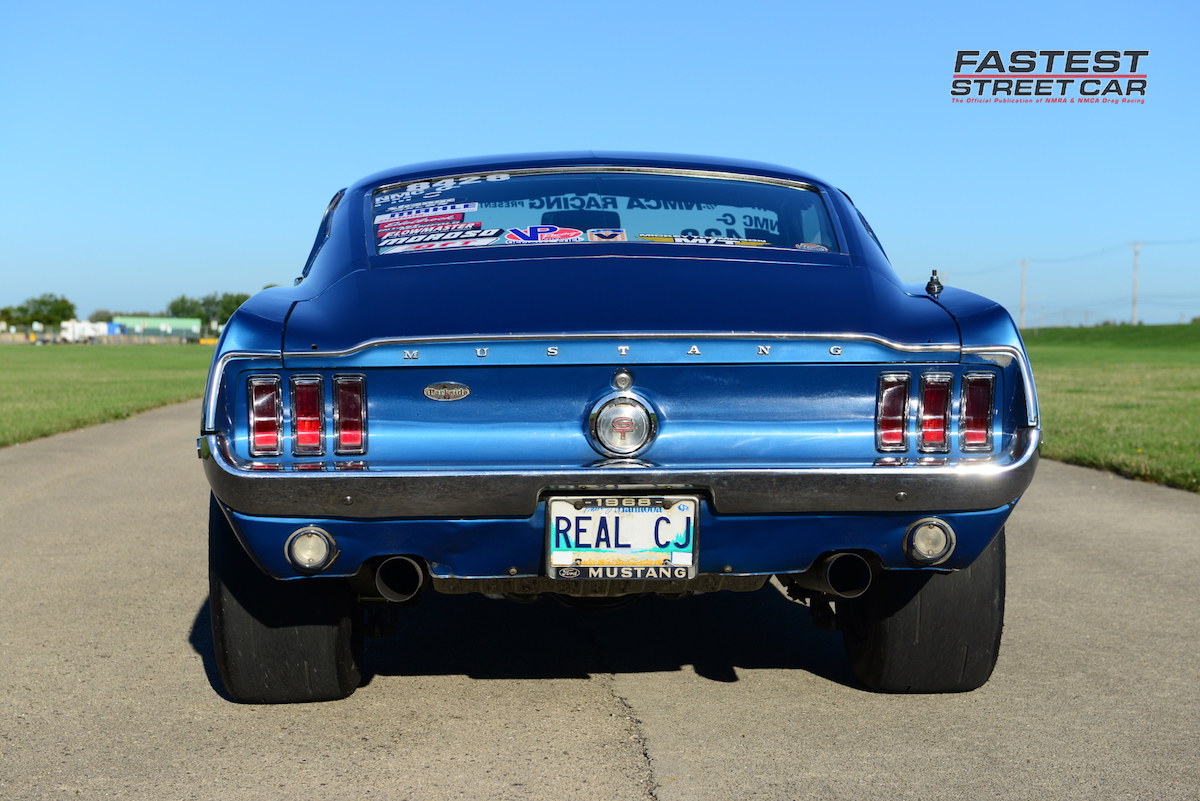 I took it for a test-drive and was going to buy it the next night, and at work the next day, a guy came in with a 1968 1/2 Mustang Cobra Jet, said Fotti. He was telling me how it was introduced mid-year and how there were only a few made, and when I told him I had been planning to purchase the 1967 Mustang I had looked at the night before, he asked how much I was going to pay for it. I told him I was going to pay $2,450, and he said if I gave him that same amount, I could buy the 1968 1/2 Mustang Cobra Jet instead, so I did. I remember the exact date. It was March 15, 1971.

According to Fotti, the car wearing Acapulco Blue paint was one of only 1,044 made, and the original window sticker for it indicated that the asking price was $4,978.70 when it was new. It was powered by a 428 cubic-inch Cobra Jet engine and an automatic transmission, and it was rolling on the original wheels and Goodyear Polyglas tires with raised white letters.

The car was made on July 16 of 1968 in Detroit, and was sold at a dealership that's just three miles from my home here in Winnipeg, said Fotti. It was very clean, and the previous owner, who had a screwdriver kit on him at all times in case any screw came loose, would never dream of stepping on it, but within an hour of buying it, I was practicing launching it.

Fotti proceeded to set up several street-races to take part in, and then headed to the track when it opened that spring.

I ran in a bracket class the first weekend, and then after that, I ran NHRA Stock, and I won four of the first five events I entered, said Fotti. As a matter of fact, the headline in the National Dragster was Fotti Wins Four in a Row, and I thought that was pretty cool. I was running low 14s when I first got the car, and by the end of that year, I had changed the cam and installed headers, and I was running mid-13s. When I hurt the engine, I had a local engine-builder build me another 428 cubic-inch Cobra Jet engine over winter, but that time, it was .030 over and I picked up to 13.00. Then, with another cam and a piston change to up the compression, and with slicks, I picked up to 12.80s and earned the Super Stock championship at Keystone Bison Dragway in Winnipeg in 1972.

Shortly after, Fotti took a 225-mile trip to Fargo, North Dakota, to race, but a leaned-out cylinder, blown head gasket, and chipped piston ended his weekend early. Rather than focusing on getting his engine repaired, he focused on getting married a month later.

Our wedding on June 2 of 1973 was all planned around going to the NHRA Spring Nationals at National Trail Raceway in Ohio as spectators the week after, and that would be our honeymoon, said Fotti. Of course, around the same time, we had bought a house, built a garage, and started having kids. At that point, I was faced with whether I should take them to places like Disney World or play with my car, and I chose to take them to places like Disney World. 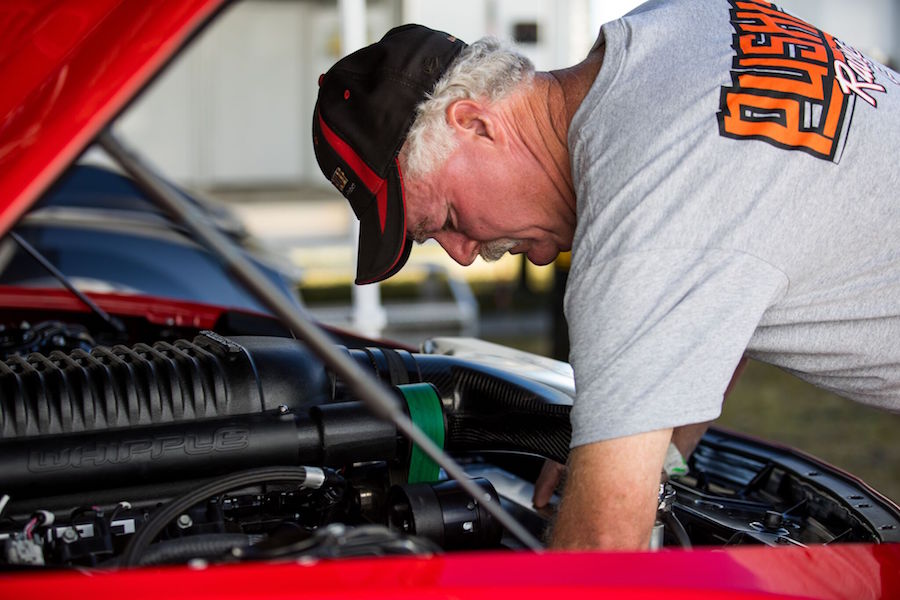 The following year, Fotti bought the wheels that were on Marcell Cloutier's 1968 1/2 Mustang Cobra Jet when he won in the Super Stock category at the NHRA Winter Nationals in California, and promptly put them under his car. By the mid-1980s, he had hired an engine-builder to build a replacement 428 cubic-inch Cobra Jet engine for him, but the project never progressed, and by the early 1990s, Fotti had found another 428 cubic-inch Cobra Jet engine to purchase.

I bought it from a seller in Nebraska, and my family and I made a vacation of going to pick it up, said Fotti. We put it into our camper with a Pampers box over it, and carried on with our vacation.

Within a few weeks of putting the engine in the car and driving the car, Fotti ended up with a spun bearing, and while he was looking for parts, he happened upon a 1969 Torino with a 428 cubic-inch Cobra Jet engine, and he purchased the whole car for parts.

The car was horribly rusty, but I put the engine from the car into my car, and I started racing it every now and then, said Fotti. I even went to the Muscle Car Shootout at Brainerd International Raceway, but by 1995, the other engine-builder had finally finished my other 428 cubic-inch Cobra Jet engine, so I bought an enclosed trailer and went racing for a month at time with friends. We would go to Milan, Norwalk, and other places to run various classes including Nostalgia and bracket, and I had gone from running 13s to running 11s.

I started going to World Ford Challenge events in the early 2000s, and then I started going to NMCA events in 2008 to run in Detroit Truetrac Nostalgia Muscle Car, said Fotti, who's married to Patricia, has a daughter, Cindy Potter, a son, Don Fotti Jr., and five grandchildren. Even though my car could run in the 10s, I would run in the 11.50 index, and use things like my throttle linkage to slow it down because I didn't want to go fast enough to have to have a roll cage in the car.

Through the years, Fotti has collected an event win, several runner-up finishes, and several top-ten standings in Detroit Truetrac Nostalgia Muscle Car points in the car which still sports its original paint, a full stock interior, radio and fully functional heater, and which he still drives on the street. After the most recent race, the 13th Annual Nitto NMRA/NMCA Super Bowl of Street Legal Drag Racing presented by Fuel Systems Technology, July 27-29, 2018 at Route 66 Raceway in Joliet, Illinois, Fotti expects to see that he has moved from ninth place to sixth place when points have been officially tallied.

The competition is always extremely tight in Nostalgia Muscle Car, said Fotti. For example, if we have twenty cars, the top ten are qualifying within two or three hundredths of a second apart, so they're definitely all on the money.

While Fotti says some fans have tried to dissuade him from using his collectible 1968 1/2 Mustang Cobra Jet as a race car, he has no plans to park it.

So many people come up to me in the pit area, look at the car and say You shouldn't be racing a car that's worth close to $100,000, but this car is meant to be raced, said Fotti. I wouldn't want to race another one.

(This feature, with additional pictures, is from the October 2018 issue of Fastest Street Car) 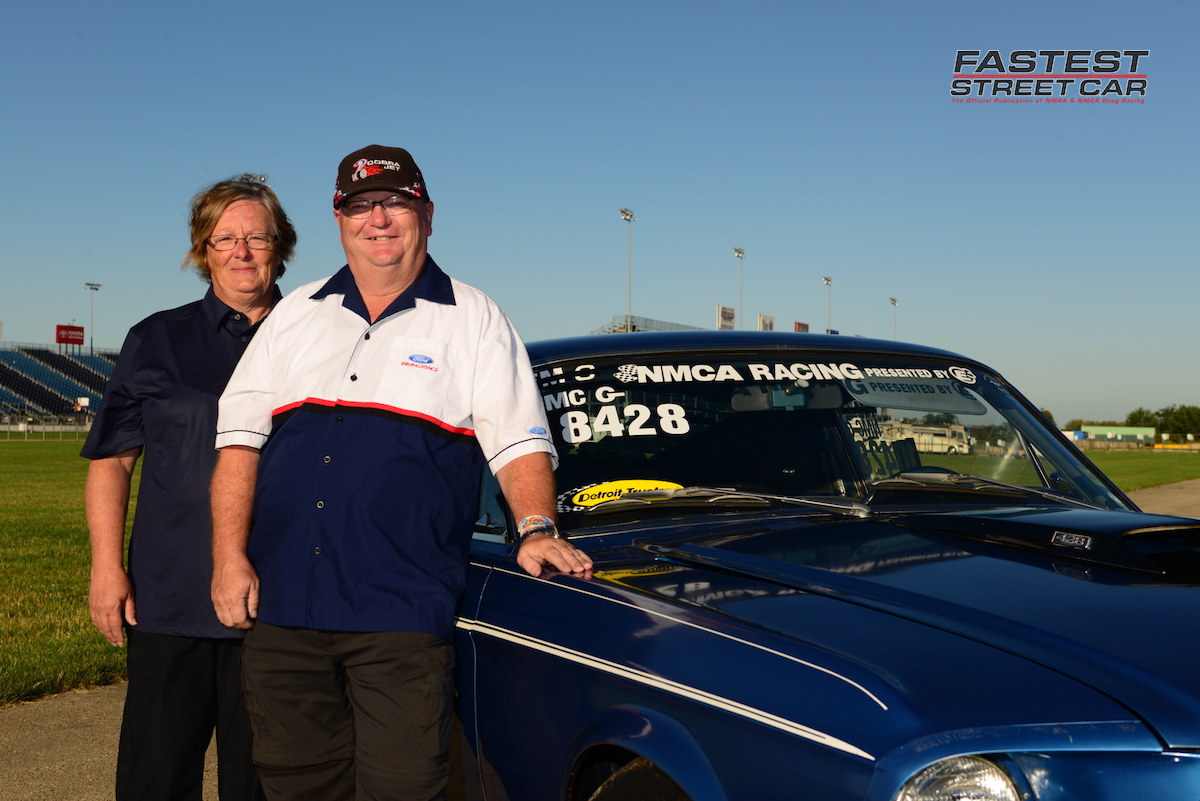