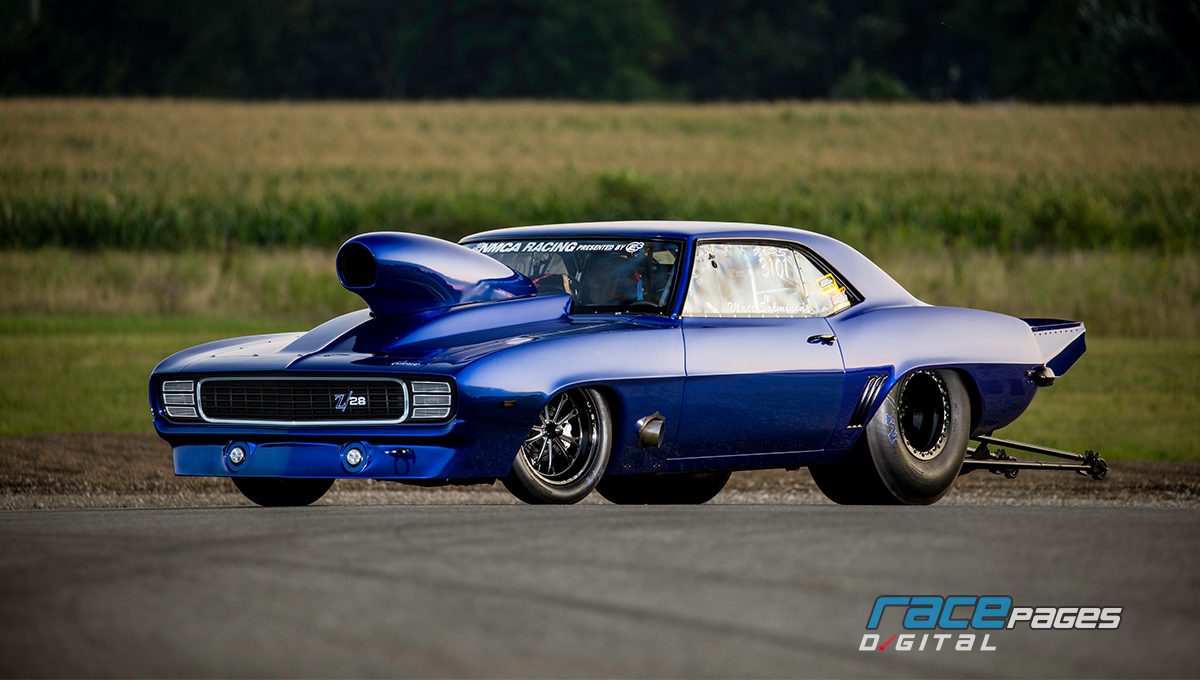 While watching his brothers work on their muscle cars as a youth, Matt Salminen learned a lot. Whether they were swapping tires or engines, he was intrigued, interested and itching to help, and eventually, they let him. A few years later, when he was 16, he got his hands on a 1978 Volare that his father purchased for his mother but she didn't want, and while he left the 318 cubic-inch engine in place, he put different wheels and tires on it, and gave it new headers and exhaust, to make it, as he put it, racier.

The car was medium blue, which is my favorite color, so that worked out, but unfortunately, I totaled it about six months after I got it, Salminen said. I was going around a corner and the driver in the car coming from the opposite direction had his brights on and blinded me. I hit a mound of dirt at 50 miles per hour, flipped and barrel-rolled. I passed out, and when I came to, the car was still running and I had to crawl out through the windshield. I sat on the side of the road for two hours before someone came by and helped me. I was pretty bruised after that.

Despite the fact that his parents were apprehensive about it, Salminen then purchased a 1977 Trans Am.

It was a Smokey and the Bandit model with a 400 cubic-inch Pontiac engine, so it was cool, said Salminen. But one day when I was stopped at a stop sign, a motorcycle rider hit the back of the car, went over it and messed it up. It was drivable, but on the way home, the transmission wouldn't work and I had to call a tow truck. The tow truck driver forgot to lock the steering wheel on the car, and it turned and hit a phone pole. That was the end of that car.

Right after I bought the truck and was towing it home, the cab fell off the frame while I was going around a corner, and that caused a few dents, said Salminen, who hadn't been able to catch any breaks. I ordered a 357 cubic-inch small-block Chevy engine from Summit Racing to put in the truck, and I started bracket-racing it at Bradenton Motorsports Park in Florida, which is not far from my house. It was running 11s.

I sold the S10 and bought a 1968 Camaro in 2005, and with a Sonny Leonard 706 cubic-inch big-block Chevy engine on four stages of nitrous, I ran 7.40s in Outlaw 10.5 at various tracks in Florida, said Salminen. I didn't have that car for long, as I bought a 1969 Camaro from Gil Mobley, a well-known racer from the East Coast, and I was running 7.20s and I was winning races, but then I got into a bad wreck in 2006. I hit my head on the roll bar, the car caught on fire and I was dazed and had some trauma and had to go to the hospital.

When he recovered, Salminen hired Dan Neumann of Dan Neumann Race Cars to rebuild the car, and they outfitted it with a 600 cubic-inch Chevy engine by Kris Nelson of Nelson Competition Engines and paired with twin turbos. Salminen was back to sailing in Outlaw 10.5, but then decided to sell the car in 2010 to focus on his business, Matt's Electric Inc., for the several years that followed.

I wish I could have just parked it (instead of selling it), but the market crashed and business slowed down almost overnight, said Salminen. I had to lay off all of my employees, move back to my home office and sell all of my cars to pay bills and put some (money) aside for my family just in case things got worse. That was really hard, but I knew one day, I could buy another one.

That day came in 2017, and by that time, Salminen was really raring to return to the cockpit of a race car.

I knew that I wanted a 1969 Camaro, and that I wanted it to just be a roller, and I found an ad for one that I really liked in Massachusetts, said Salminen. The blue paint on it really caught my eye, and the chassis, which was already set up for a 6.0 cert, would just need some updates. The owner sent me a bunch of pictures and when we agreed on a price, I went and picked it up. It's the one I race now.

Upon taking delivery of his just-acquired race car, Salminen took it right to Dan Neumann Race Cars for some upgrades.

The car had a carbon fiber interior and RacePak, which was good, but it also had an all-steel front clip, factory steel doors and real glass, and I knew I wasn't going to be able to compete with it having all that weight, so Dan (Neumann) ordered a new, light front clip, and fiberglass doors, and he did all of the fabrication work for that. He also massaged the car's Strange rearend and four-link full-floater, and he updated the trans mount and shifter mount.

Meanwhile, Salminen had hired Kris Nelson to build a 632 cubic-inch Chevy engine for the car, and after gathering data from fellow racer Mark Micke of M&M Transmission, he went with one of his Turbo 400 transmissions.

When Nelson was done building the bullet, he tuned it on the dyno, where it made 1,350 horsepower, and the guess was that it would pick up to about 2,000 horsepower when nitrous joined the mix. Later, Nelson took the engine to Neumann's shop, where the crew fabricated headers, a fuel cell, and miscellaneous brackets.

I knew that I wanted to hire Kris Nelson to build an engine for me because he was always good, said Salminen.

When the work was wrapped and Salminen was sure that he had a healthy hot rod, he headed to the U.S. Street Nationals at Bradenton Motorsports Park in January of 2018, where he entered the Outlaw 632 category.

I hadn't raced in several years at that point, and on top of that, we had a lot of trial and error that weekend, Salminen said. We had some system issues and we were trying to figure everything out with the new engine and the reworked chassis, but I did manage to get down-track a couple times and I went 4.90.

He exited eliminations while still dialing in his new car and combination at the latter event, but he committed to staying in NMCA ARP Nitrous Pro Street. While he wasn't able to make it to the 10th Annual NMCA/NMRA All-Star Nationals in April at Atlanta Dragway, he made it to the 17th Annual Quick Fuel Technology Bluegrass Nationals in May at Beech Bend Raceway in Kentucky, where he secured a 4.60 to qualify in the second spot and went on to the ever-welcoming Aerospace Components Winner's Circle with a 4.67.

During qualifying at the race in Kentucky, we almost went on the bumper, and I called my nephew, Martti Roberts, who's also my crew chief, and asked him to fly to the race, and he got there at 2 o clock in the morning, said Salminen. I'm glad we were able to go on to a win.

Salminen followed that with a 4.56 to qualify in the third spot, and after burning up a few pistons and working overnight to replace them, he made it to the semifinal, at the 13th Annual Nitto NMRA/NMCA Super Bowl of Street Legal Drag Racing in July at Route 66 Raceway in Illinois. He was 4.55 to qualify in the fourth spot and made it to second round at the 17th Annual Honeywell Garrett NMCA All-American Nationals in August at Summit Motorsports Park in Ohio.

By the end of the race season, he was one of four drivers in contention for the championship at the final event of the year, the NMCA World Street Finals in September at Lucas Oil Raceway in Indiana, and after recording a 4.49 to qualify in the fifth spot, he made it to the second round. While that took him out of contention for the championship, Salminen, who had been reaching out to Hank Hill for advice on ideal suspension settings, secured a fine fourth-place finish in NMCA ARP Nitrous Pro Street points. Now, he's making plans for the 2019 race season.

It was quite a lot of work and we were swapping converters, gears, slicks, and other things to find what worked best, but we were able to run the 4.49 at the race in Indiana, said Salminen, who's married to Natalie, and has two sons, Kyle and Jared. We were happy about that, and we're also happy with the new car. Now, we're focusing on racing in 2019.